A post shared by HarveyLewisUltrarunner (@harveylewisultrarunner) on Jun 28, 2018 at 9:12pm PDT

Harvey Lewis and his crew set out from Springer on May 30, and as of midday Friday, July 6, is at mile 1,756.1, meaning he’s finished about 80 percent of the trail in 37 days with 434 miles left to go. The current overall FKT was set by Joe “Stringbean” McConaughy last  year when he finished a self-supported attempt in a mind-blowing 45 days, 12 hours and 15 minutes, breaking both the supported and self-supported records. Lewis is aiming to summit Katahdin on July 14 to break Stringbean’s record, which means he will need to average almost 50 miles a day from here on out. 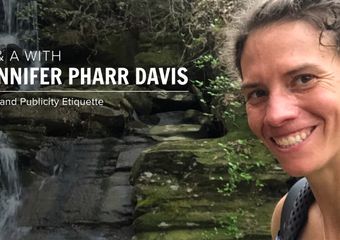 Hailing from Cincinnati, OH, Harvey Lewis is a mainstay in the ultrarunning world, having run 50 ultramarathons in the last 20 years. He specialized in races over 100 miles long. Aside from winning Badwater—a grueling, 135-mile race in Death Valley—he also won the 2017 24-Hour National Championship by running 241 miles in 58 hours. His crew is led by his 78-year-old father, who is in charge of keeping him fed, tracking his navigation, and occasionally chiding him for wasting too much time talking to other hikers (nice to know even speed record attempters are like the rest of us in this sense).

Post by @tracey.outlaw Day 34 – PM Today was brutal. Temps reached the high 90s (though Adam Schalit said it felt more like 110). With the humidity, “it felt like a steam bath all day,” he said. Adam and Eliza Hamm hiked about 4.5 miles in to meet Harvey with drinks and snacks. This is how they found him. The stream was his escape from the heat and humidity; a way to revive himself and I suspect cool his head and bring his body temp down. Albeit temporary. Seven minutes later he was back on the trail, eating as he continued his push to the north. Maine is still 588 miles away. Together they trekked out and reached Alann, dad and the place where a decision had to be made – the rock and hard place. The last two nights sleeping as been tough. Even with a fan in the van, the heat had made sleeping a challenge. The poison ivy is not making things easier. They all considered the option to take on the next 21 miles, arming Harvey with hammock, or bag to sleep on. And nutrition. It was getting dark. They also weighted in the climbs that lay directly ahead. Adam shared that one of the areas Harvey would have to navigate is called the Bennington Triangle (Like the Bermuda Triangle- See link below 😳). There are a series of old cellars, test bores for mining, old funicular tracks, snowmobile tracks and roads making it easy to get lost, especially in the dark by yourself. Harvey opted to stay at the Vermont Route 9 crossing outside Bennington (1,610 miles). And hopefully to sleep well. He will get up at 4 a.m. and start again. He will summit Stratton Mountain, Bromley Mountain and then a bunch of smaller peaks coming up after that. More photos from today to follow later… #wheresharvey @newtonrunning @swiftwicksocks @9onyourside @clifbar @outsidemagazine @ultrarunningmag @irun4ultra @2xu_usa

A post shared by HarveyLewisUltrarunner (@harveylewisultrarunner) on Jul 2, 2018 at 8:13pm PDT

Harvey’s attempt is also being filmed by a small film crew, so his journey will be well documented. One of his sponsors, ROAD iD, has created the hashtag #wheresharvey on Instagram to help followers track his attempt and to encourage other hikers that see him to help verify his location. In FKT attempts, providing proof and documentation of a successful record is the responsibility of the runner, so having lots of different means of verification is important. If you see Harvey on the trail, say hi and snap a picture (but don’t chat too long; his dad may get grumpy). You can also follow his attempt on Instagram here and cheer him on as he nears Maine.