Has the AT Had Enough of Me? The First of Three Ridiculous Days

I wrote a LABE (long-ass blog entry), so I broke it up since I know people don’t have hours to thumb their screens on one post. This is Part 1 of 3.

Things Begin to Look Quite Grim

We arrived early at Rice Field Shelter, which faced a gently inclining heath to the west with a 100-yard path that promised a view into West Virginia. 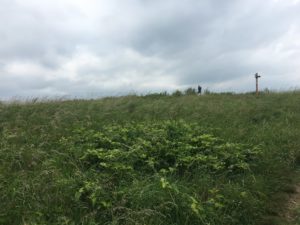 “It’s not going to rain,” Braveheart said. Two weeks prior when we planned for him to join my hiking buddy, Sunshine, and me for 40 AT miles, he had promised to bring good weather. “It never rains wherever I am,” he said. As evidence, he had cited multiple cloud-free visits to Portland, Oregon.

I had given Braveheart, my dear cousin Ken, this trail name alluding not to William Wallace but to Ken’s literal courageous spirit. He left a successful but soul-deadening corporate career eight years ago to become a life coach, and in the process discovered and determined that his own life’s purpose was simply to love, fearlessly. In the last five years, we’ve grown closer and spent more time together than in any of the previous forty or so that we’ve been alive. Mostly this is because he makes togetherness happen, despite our mostly living 700 miles apart.

In short, I feel closer to or loved more by few people, so I’d been eagerly anticipating our time together.

The leg leading up to Sunshine’s and my zero in Pearisburg, just before Braveheart joined us, had been extremely tough for me. The distance between Marion and Pearisburg, plus our desire not to carry 15+ pounds of food each, had motivated us to push a lot of big-mile days, just when the weather was turning hot (when not wet), and Virginia’s promised flatness hadn’t materialized. Then, too, right when my right foot seemed finally healed from its tendinitis, my left foot was starting to give me trouble.

But lots of Mexican food, Dairy Queen, a pedicure, and the usual town luxuries (showers, laundry, sheets) had felt as restorative as any town visit, which is to say hella restorative, and I had no reason to suspect the AT would be any crueler or kinder than usual during Braveheart’s visit.

Then Tuesday morning, leaving Sunshine behind to wait for a trekking pole delivery, we had set off to climb a short, steep seven miles out of town. Within a few hours, I noted with dismay, he was quite a bit ahead of me, and the distance between us shrank  only when he stopped to wait for me.

Seriously? I thought. I dug my pole into the dirt for my next step and felt the injustice of this. Futile feeling descended. It was 68 days since I’d started hiking in Georgia. He was out to join me for four.

He’s athletic, of course. He runs. We have logged many running miles together, miles he always consents to run at my slower pace. I was used to him being the fast, strong one; it was why, when Sunshine and I mapped out an itinerary for his visit, we decided not to abridge our typical distances. Daily mileages of 7 (uphill, out of Pearisburg, VA), 16.5, 14.5, and 2.5 (to the only road where we could get a ride to his car) would challenge but not unduly tax him.

I didn’t reckon he’d chew up the first four miles, leaving me to breathe his dust.

The word “should” came up: This should be easier for me than it is for him, I thought. I don’t care how athletic he is; he hasn’t been doing this for eleven weeks.

A popular sentiment among athletes, motivational posters, and self-help literature is the notion that you’re stronger than you think you are. But on my first day out with Braveheart, he was, not unkindly, kicking my ass.

It devastated me: I’m weaker than I think I am?

Now, at Rice Field, after eating we walked up the path and gazed out over West Virginia. Clouds thickly filled the sky, and the air’s humidity plus the forecast we’d checked that morning contradicted Braveheart’s attempted manifestations.

We discussed hiking another half hour to a campsite in order to eat up a few of the next day’s miles. But this was such a pretty setting and we had arrived early enough to secure shelter berths and keep our tents dry at least one night, so we decided to stay. We laid out our sleeping pads and bags, spreading them just enough to include Sunshine. 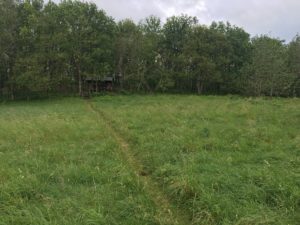 After a little bit, one of a crew of about nine arrived. I knew the crew numbered about nine because I had heard of them, had seen some of them at the next-door hotel in Pearisburg, had had a conversation with one of them outside Atkins, and had met all of them in Damascus. The crew were all men, almost all in their twenties, and all hailing from lives harder than a thru-hike.

As they trickled in that night, claimed tent or shelter space, shook cigarettes out of their packs, and poured food bag contents onto the table, they engaged in a lovingly insulting and vulgar banter with each other which, if not always easy to follow, captivated and entertained me. Mainly this was insofar as it illustrated their solidarity with each other and differentness from me.

Let’s go to Luckenbach, Texas, with Willie and Waylon and the boys.

Likewise, at any moment one of the group members might start with “Mama, don’t let” only to be joined by the rest for the chorus “…your babies grow up to be cowboys.” They said this was their theme song—they said it was ironic but I never caught the nuance of how, and it was a nuance. Although the group was rough and tumble, its repartee was as sharp as any on an Aaron Sorkin screen page.

“Nooooo,” he held his head in the manner of a curmudgeon faced with a youth who’s just realized that Run D.M.C.’s “Walk This Way” is a cover.

“No, no, no. You’ve got to hear the original version. Old Crow Medicine Show.”

Musicality must have been among the criteria for membership; dulcet notes from Red Bull’s pan flute occasionally brought to the scene a brushstroke of melancholy, and, by their contrast to the testosterone-fueled banter, hilarity.

It rained, and then the rain let up, and we were treated to a gorgeous sunset. 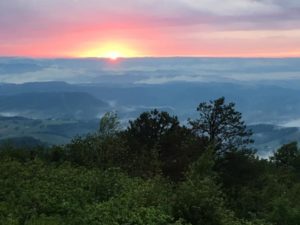 As soon as the rain let up and showed us this vista, it seemed, sprinkles started again, and we rushed back to the shelter and cover.

If any member of their group didn’t smoke, forgive me for not being able to name him, as, in any given 30-minute interval, six at once of them puffed away at what probably seemed to them a courteous-enough distance from the shelter’s open side (which distance shortened dramatically when the rain started, my repeated offers to use my umbrella to lessen the white cloud inside the shelter notwithstanding). 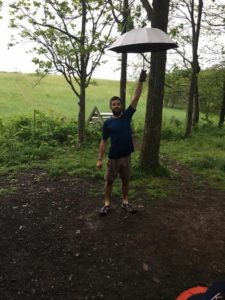 And here is where my conflict began. I liked these guys, to a person. I liked their boisterousness and their willingness to welcome Braveheart’s and my forays into their conversation, flat as our attempts often fell.

As coarse and insulting as they were, they never laughed at you; they laughed with you.

But, look. I and any one of these guys were not likely to form a bond deeper than that granted by shared experience. Had we found each other at the same bar, not having met on the trail, the likelihood of our striking up a conversation was slim.

The “rules” outside the trail are different from those on the trail. Off trail, people’s engagement with one another is more scripted; we fasten our masks before leaving the house. On trail, your mask’s off, dislodged by discomfort and a focus on survival. It’s the loneliness of the woods, the paucity of friends, the fact we’re all slogging through the same storm, stepping up the same switchbacks.

And, because trail life is different from anything I’ve ever done, most of the people I’ve met out there are different from anyone I’ve ever met. I love this. Hiking exposes me to people unlike myself. D.C. might be a transitive area, but its people share a few qualities—drive, ambition, passion. I mean, I won’t be accused of grossly generalizing here, will I, if I say D.C. is not that laid back?

And that’s fine; I’ve lived in the area most of my life and I’m not moving out anytime soon. After all, I’m not that laid back, either. But, man, it’s nice to hang out with laid-back people.

That is, until they are so laid back that they don’t realize how much what they’re doing bothers somebody else.

All of which is to say that by the time we were getting into our sleeping bags and the rain was not letting up, my dismay and the physical discomfort in my lungs and the stress I felt at being unable to control my surroundings, to protect my own person from smoke inhalation, had basically canceled my positive feelings toward the group.

It was about to be a long night.

*P.S. I finally found and listened to the Old Crow Medicine Show version of “Wagon Wheel,” and, Red Beard, you were right.