Hearing Gunfire on the AT Near Hawk Mountain? Don’t Worry, That’s Normal

Imagine being a day into your AT thru-hike attempt. You are feeling free, disconnected from the world you left behind, alone in the woods with your thoughts and the silence. You pitch your tent near the Hawk Mountain shelter as the sun slowly sets, and begin to heat up the night’s dinner. The woods fall even more silent as the day becomes night.

Suddenly, you are startled by a large explosion and the chattering of machine gun fire below you. You hear orders being shouted as the woods seem to come alive with the sights and sounds of simulated combat. There is flashing all around you and then, as quickly as it started, it stops. You hear feet laden with heavy packs shuffling through the brush. Then silence again. The silence of the woods returns, and you are once again alone with your thoughts and the sound of the trees. 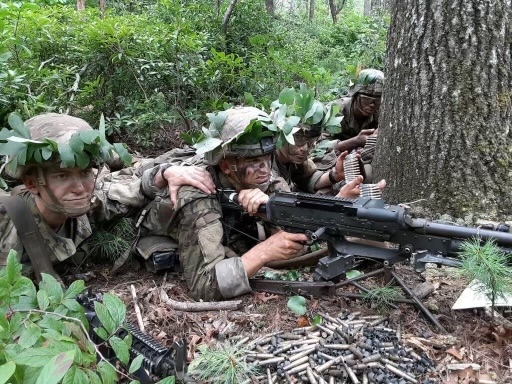 If you have ever been on the AT or BMT between Springer Mountain and Woody Gap and felt like you were suddenly in a warzone, you are not alone. Most that set out to complete the trek from GA to Maine are unaware that Camp Frank D Merrill, just three miles south of the AT between Hightower and Cooper’s Gap, is home to the 5th Ranger Training Battalion and the Mountain Phase of Ranger School.

It is located South of Cooper’s Gap and sits in a small bowl made by the portion of the Tennessee Valley Divide (TVD) that extends roughly from Springer Mountain to Gooch Gap. Students in Ranger School spend 21 days at CFM, which is widely believed to be the hardest and most grueling phase by those that have graduated and wear the coveted Ranger Tab. 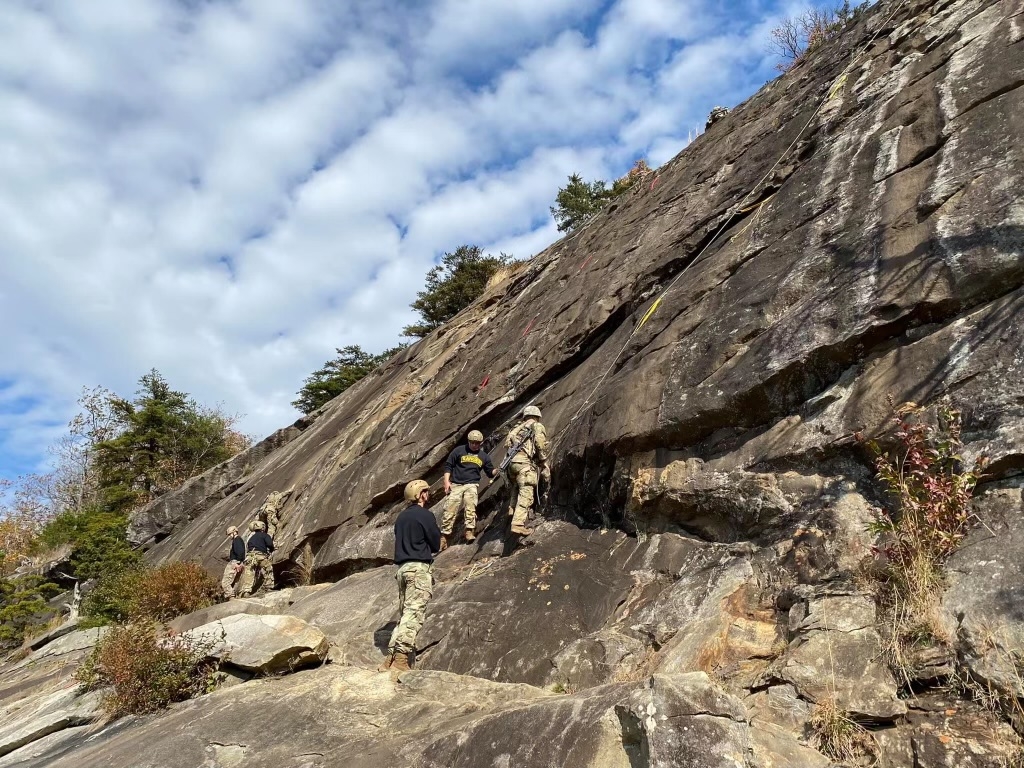 Upon arrival at CFM, students spend the first four days learning the basics of military mountaineering. They employ those skills on climbs and ascents in the area around camp as well as Mt Yonah in nearby White County. Next, students transition to four days of combat techniques instruction, where they learn the basics of planning and conducting missions in mountainous terrain.

Following the techniques instruction, students pack up their gear and hike out of camp into the national forest for 10 days of simulated combat patrols. No, we do not use live ammunition. During these 10 days, the students will be restricted to two meals per day, less than two hours of sleep at night, and walk carrying loads of up to 80+ pounds for most of the day and night. Additionally, they will fight simulated enemies in various scenarios.

It is during this portion of the course that most of the interaction between members of the Ranger Camp and civilian hikers/bikers/campers/runners occurs. Typically, the interactions are brief and pleasant and all parties go their separate ways. Occasionally, however, there is a bit of animosity about why the military is training in the CNF. I’d like to address some of those concerns, starting with why we are there in the first place. 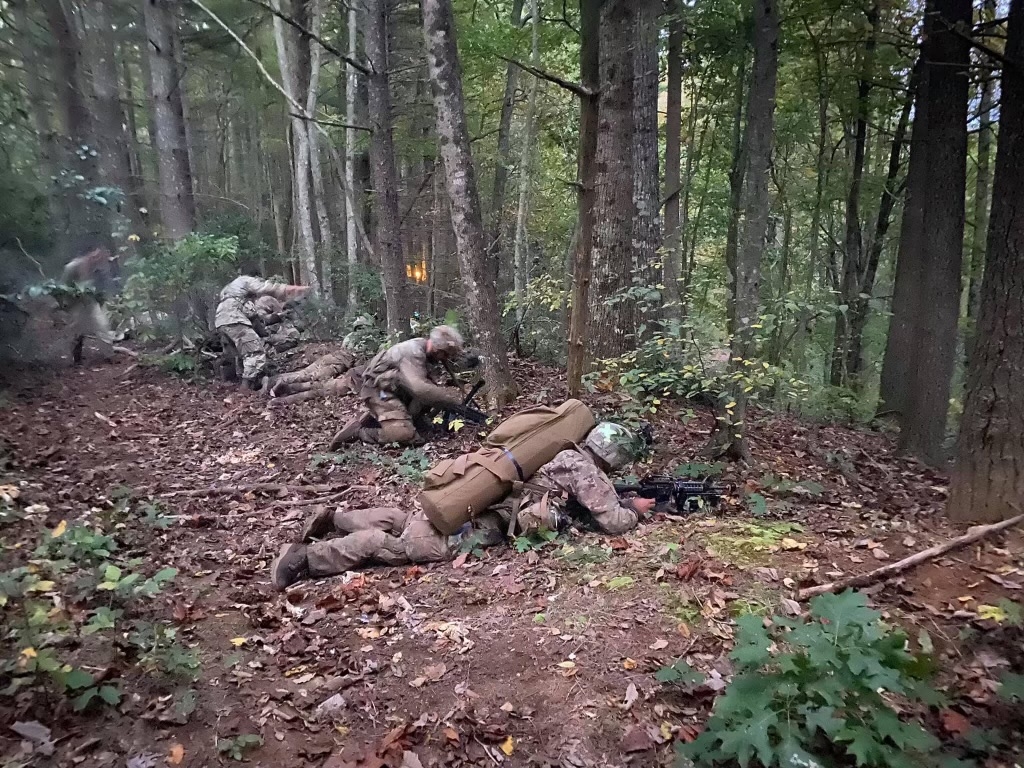 Students of the Ranger School spend 10 days in the national forest for simulated combat patrols.

Ranger training began in the area in 1952. However, the camp wasn’t made permanent until decades later. Furthermore, it wasn’t until 2015 that the US Army actually purchased the land that the camp sits on from the National Forest Service (NFS). Until that point, it was a “tenant” on the NFS land.

The agreement struck between the Military and the NFS transferred ownership of the 200+ acres the camp sits on to the military, gave back a separate portion of land the military owned to the NFS, codified the rules and regulations for military use of the entire Chattahoochee National Forest (CNF), and outlined good faith measures the military would take to reduce the effects of military training on the CNF.

“We take pride in the strong relationship we have with the Forest Service.”

Those provisions (with input from stakeholders from the NFS, Department of Natural Resources, and Fish and Game) are reviewed telephonically every quarter, and in person once a year. We take a tremendous amount of pride in the strong relationship we have with NFS, and in the collaborative efforts we have made for the betterment of all that use the CNF.

For instance, CFM personnel are responsible for the repair and maintenance of over 220 miles of NFS roads in the areas near camp. Basically, if we drive military vehicles on the road, we maintain it.

Additionally, we conduct multiple large-scale “CNF cleanups” yearly, with the last two being conducted in April ’21 and January ’22. Cumulatively, we removed over 500 pounds of trash ranging from small items that fell out of Ranger students’ packs, to washers and dryers deliberately dumped in the woods by people unwilling to dispose of them correctly.

The last one I’ll highlight, but far from the end of the list, is the fact that CFM serves as the coordination point for all military use of the CNF. The benefit of this is that, due to our close ties with all stakeholders in the CNF, we are aware of any areas that are “no-go’s” due to conservation efforts. We, in turn, can enforce those restrictions to all military units training in the forest. 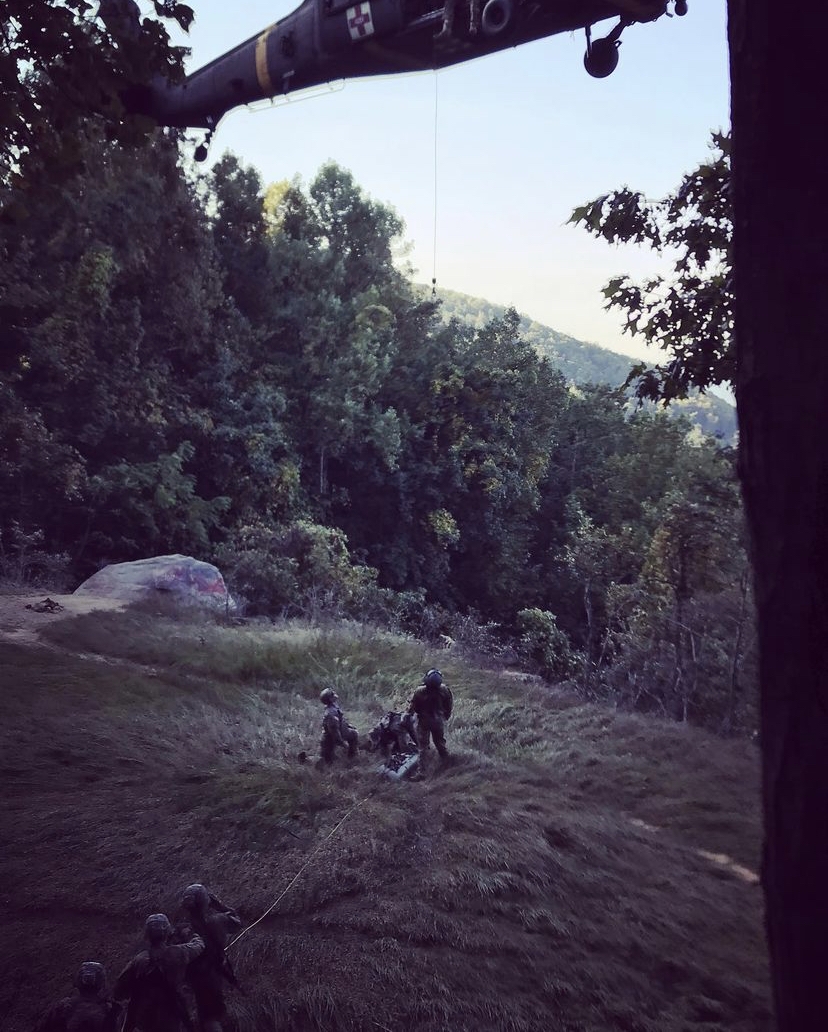 We are also uniquely suited to assist anyone who finds themselves in need in the woods. In the two years I have been assigned to CFM, Ranger Camp personnel have been responsible for three separate rescues ranging from snake bites, lost hikers, and even one individual who, frankly, was on a horrible acid trip and was found running through the woods naked. Ranger Camp personnel have also responded to assist with situations on Mt Yonah.

Whenever we are training in the woods, there is always a well-drilled medical support plan in place. While this is intended for Ranger School-related events only, we have never refused to assist anyone in need. Our interactions with others in the woods are most crucial to building and maintaining the rapport of the organization.

We are aware of the impact we can potentially have on an individual or group outing to the woods. We make extensive efforts to avoid interaction or interference with anyone’s experience. For example, 24 hours prior to every day we are in the forest there are 5-10 Ranger Instructors walking all of the lanes for the following day, in part to ensure we won’t run into civilians but also to ensure the route isn’t becoming too warn out.

We routinely, based on time of year and feedback from Instructors, alter the routes we use so that the forest can recover from constant use. Additionally, there are at least two vehicles for every Ranger student Platoon. The vehicles provide medical support as well as moving ahead of the students and deconflicting with any civilians that have moved into the area in the last 24 hours.

Strict guidance to “give way” if heading toward campers. 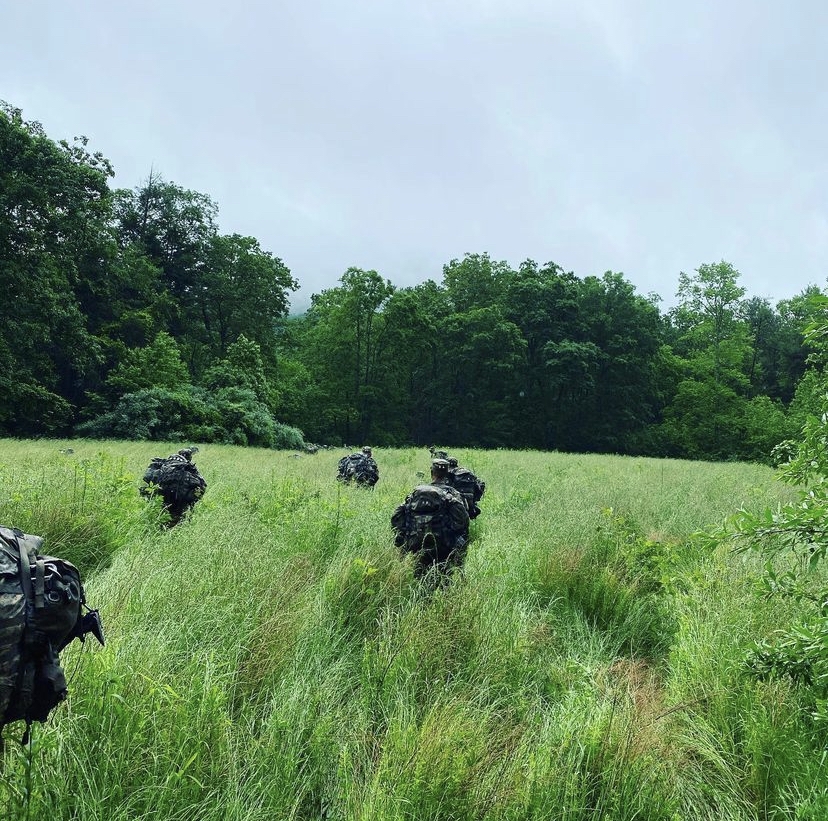 Patrols will always be predisposed to avoid interactions with other users of the national forest.

Ranger Instructors operate under strict guidance to “give way” if they happen to be headed to a spot where people are camping. As the woods become more and more crowded during peak months, this can be difficult. However, we will always be predisposed to find another spot if we are not already established in an area. We will also not travel by either of the main two trails in the area unless there are safety hazards that preclude us from moving off-trail. In short, our jobs are made easier if we avoid interaction with civilians. We know this isn’t always possible, but we are trained to make every effort.

The Ranger Camp is a historic part of Dahlonega and the CNF. We are proud of our role in the community and the service we provide the Army. Many of us are avid outdoorsmen ourselves and spend most of our time off work in the CNF as well. While we strive to avoid contact with civilians, it is primarily out of respect for them. No one should ever hesitate to approach a Ranger Instructor if they are in need, or even just to say hello. We look forward to sharing the woods with you all this coming season. Special shout-out to the AT hopefuls for the class of ’22, and happy hiking.

The author (trail name “Moses) is a 14-year veteran of the US Army and is currently assigned to the 5th Ranger Training Battalion in Dahlonega, GA. An avid hiker and trail runner, he began his backpacking career in the Eldorado National Forest of California, his home state. Due to the fact that he is still on Active Duty, his backpacking and hiking exploits have centered around big miles over short days. Moses has completed the AT Maryland Challenge three times, the four-state challenge twice, and has worked during the summer months (when he can get time off work) as an AT guide for inexperienced day / overnight hikers in the GA section of the trail. He enjoys spending every moment he can in the woods and introducing his kids to the outdoors.

All images, including featured image, courtesy of Moses.