Hello and Goodbye, Maine; My State of Firsts

I basically knew nothing about Maine other than that’s where I’d begin the journey. In a fleeting thought just before I started, a quitter is what I figured I’d be. A trail full of Katahdins is so not up my alley of expertise. Neither was hiking in general, yet it took me 22 days to complete Maine, and not to jinx myself or anything but I haven’t considered bailing out just yet.

I’ve already gone into detail about Katahdin and the 100-Mile Wilderness as well as the first trail town, Monson, so this post will entail what I’ve managed to remember in the rest of Maine.

Rocks, roots, climbing, butt-sliding, wipeouts, and potential knee-replacement surgery will pretty much sum up Maine. It sounds rough, but it’s been a blast. Having grown up playing sports, I’ve always classified myself as a coordinated person. Safe to say that this is a good thing to be when it comes to the trail in Maine, because without a good sense of balance I would surely be nursing a broken bone or eight. 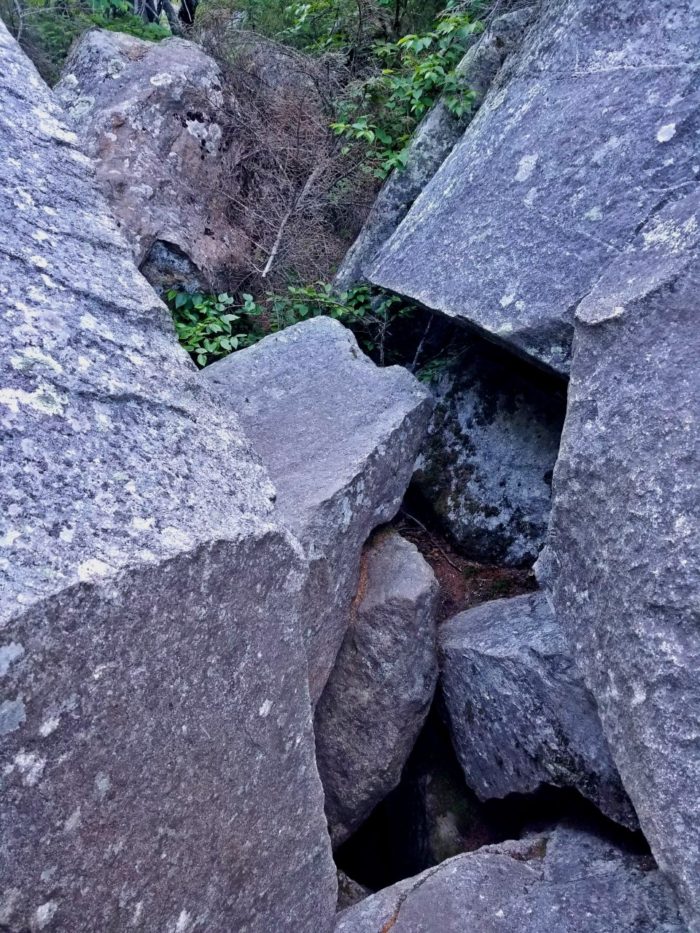 Maine on the rocks.

This is a rough trail. It is hard on the bones, in ways that they smash together going down steep hills.  It is hard on the muscles as if it’s perma-leg day at the gym and your sessions last ten hours.  It is hard on the eyes that are constantly on the lookout for roots that send you flying and rocks that are laying in wait for your toes to connect painfully.  And it is just overall hard on everything you can think of, in case you were still wondering just how much I’m actually not exaggerating. 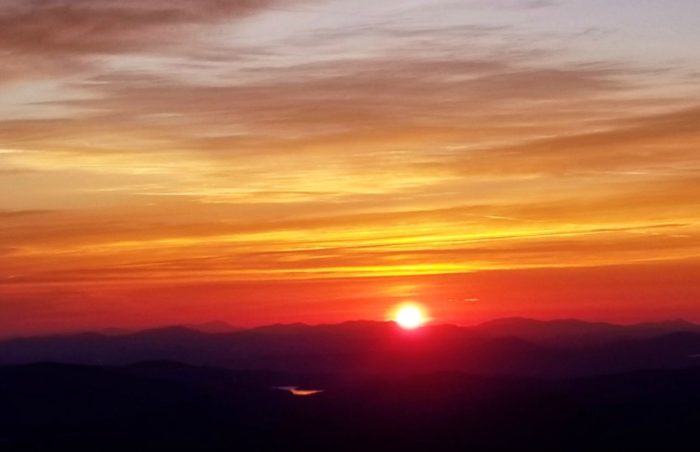 The sunrise from West Peak over Avery Peak.

On day 14, Dreamer said he wanted to get up and hike West Avery Peak to watch the sunrise. I laughed, mostly because I’m not a morning person, but also because I thought he was joking. Then I did a thing where I told him to wake me up because it sounded like a good idea even though I definitely thought the opposite at the time. He ended up waking me up, and I hope I wasn’t too ungrateful, because the 4 a.m. wake-up call was worth it in the end. It may have taken me 14 days, yes, but the sunrise was unreal. It was one of those breathtaking sights that makes the photos look black and white in comparison.

As cool as nature is and all that, it’s starting to give me some trust issues. In the rain, everything is slippery. It was almost fun reaching a camp spot each night solely because it meant you got to tell anyone willing to listen about the best fall you had that day. (Side note – they are only fun if you’re not actually hurt.) There has been a fair share of sliding down rock slabs, as well as spastic slides straight into mud puddles. It’s amazing how strong you find your body to be, taking so many hits and bouncing back just fine – literally bouncing sometimes. One did have me scared, where I had a fall with some solid air-time, only to come down on a rock directly on both of my kneecaps. In the moment, I thought they were shattered. Nobody saw, so I took my time propping myself up and wondering if my life would be easier in a hospital bed having every need catered to. Even though the answer was yes, I resumed my walk.  All good in the hood. 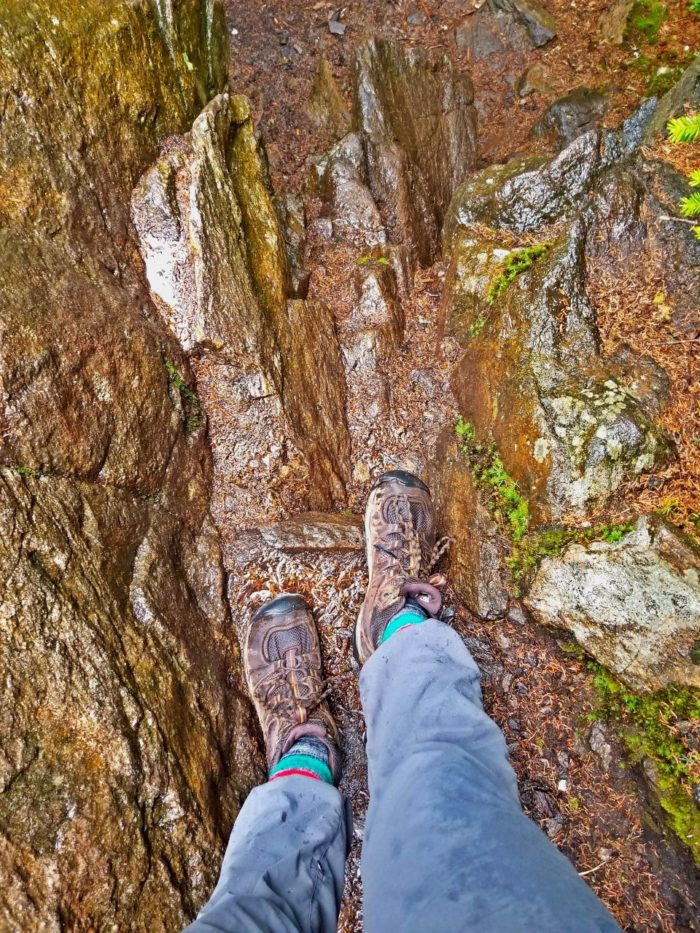 People out here have told me two things: how the state of Maine is the most beautiful among the trail states, and yet also the most challenging. In my opinion, Maine is amazing and worth every stumble. The views are above treeline for the most part, and the scenery is spectacular. While Katahdin was hard, it was a relief to find out that it is supposedly the hardest stint. As for Maine being the most challenging – I sure hope so. There are 281 miles in Maine, and though I enjoyed the beauty of them all, I must admit that I’m looking forward to walking on paths that aren’t so strenuous.

Maine seemed to have it all, anyway. You needn’t carry more than one liter of water due to constant streams, lakes, ponds, and beaches. Did I say beaches? Because yes, the beaches were a slice of paradise. Although Maine was hard, it’s almost disappointing to know the next insane amount of miles may not lead up to the views Maine boasted of. The trail ends up providing in other ways, though, so there’s that to look forward to. 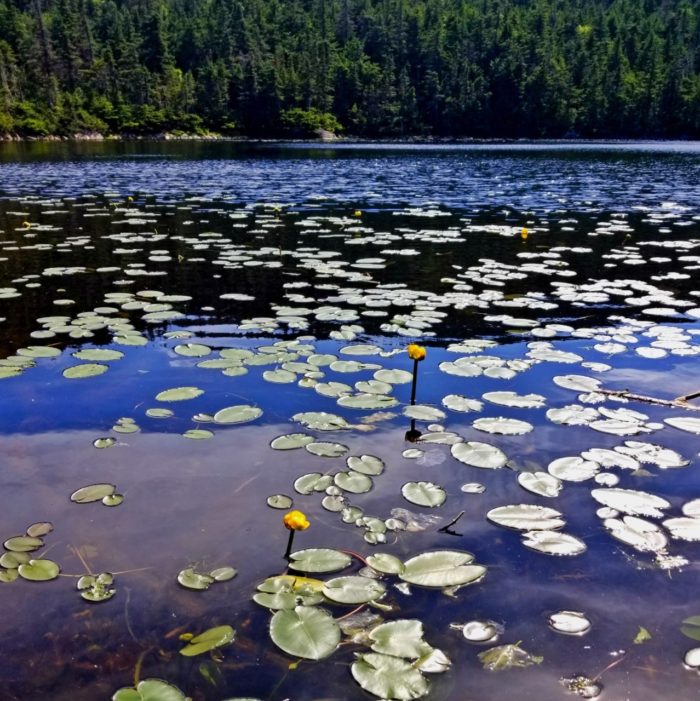 It was an exciting time, leading up to the border of New Hampshire. I can assure you that Maine did not go out without a bang. In the last mile there was some rock scrambling. It was the kind where I’d look at the steep incline and think about the best way to conserve energy for a longer time in which it would’ve taken me to just tackle it head on. I crossed into New Hampshire with Dreamer, each letting out appropriate “Woos” of happiness, and looked back in relief that we survived. *Spoiler alert, the rocks and roots of Maine continue on in New Hampshire. 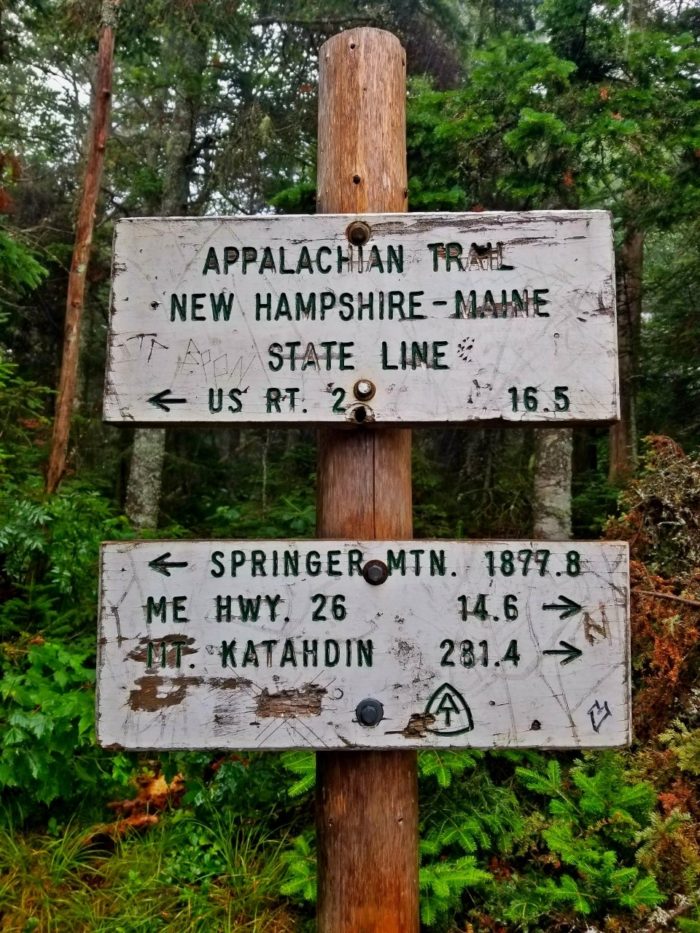 ME/NH border, with emphasis on the 281.4 miles done at this point.

As remote as it seems, there were four towns I stopped in to resupply. By stopping in, I basically mean sprinting toward the sound of cars on a highway. Due to the fact that you’re walking, the main form of transportation is hitchhiking. Hikers don’t smell all too fresh, so a big kudo goes out to those who pick up hikers.

As my first trail town, Monson was a highlight in my previous post. The subsequent town is Caratunk – which didn’t have a single computer for me to use so I further hitched to The Forks. That’s all there is to say about there, plus a mention of the three amazingly warm cups of coffees I consumed while writing on the public computer before heading back to the trail.

The point of going into towns is to resupply food, shower, do laundry, and eat as much as possible for the duration of your stay. Stratton was next; a small town with the Looney Moose Cafe, which loaded up their plates with greasy, old-style hash browns, amazing to anyone who’d just hiked miles of hunger in anticipation of hot food. This was just a town to stop in, eat as many calories as possible, and hit the trail after a market run. (This is really hard because there’s so much to say about things that people really may not care too much about, but I have to include my first official resupply so bear with me here.) My first resupply consisted of the following: Pop-Tarts for breakfast, Kit Kats, granola, and pepperoni for lunches, and to get all my necessary nutrients for a healthy lifestyle, ramen noodles with a pack of tuna. This was to last me for three days. It was a long three days, wow! Lesson learned early on – don’t eat garbage if you don’t want to feel like garbage. Either way, this did manage to get me through to the next town, Rangeley. 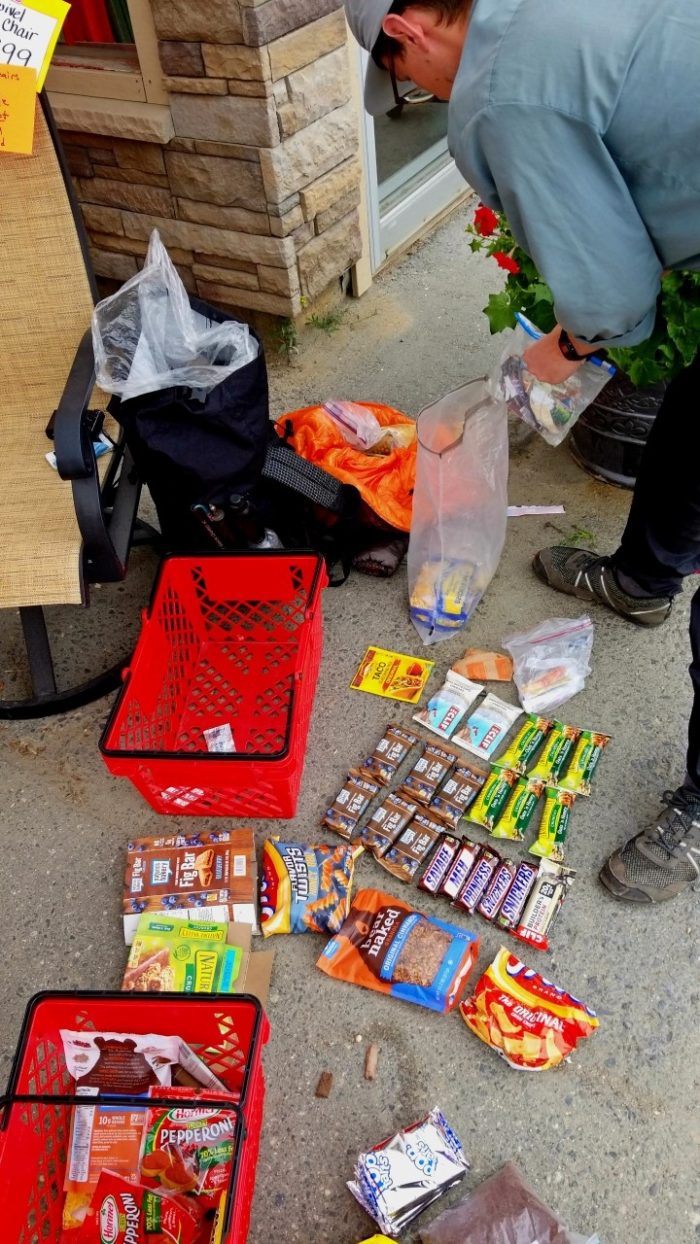 Resupplying. Dreamer and his million snacks.

Rangely had an IGA, which meant a better food selection. It also had a bar called Park Side & Maine, where I ordered for two and polished off the meals no problemo. We hitched back to the trail and powered through until I was absolutely in need of a shower and fresh laundry.

Hiker word travels fast, so Dreamer and I headed to the small town of Andover, where the Little Red Hen diner was rumored to let hikers tent in their backyard for free. It was true! I had a hot shower, did laundry, and enjoyed a super relaxing night. The following day we took a zero. The Andover library was a nice spot to hang out and distract ourselves from the upcoming all-you-can-eat-Mexican-buffet that the Little Red Hen was hosting. It was the most filling, delicious, scrumptious, and best decision ever. The owners were brilliant, and the locals around the cafe were awesome. Shout-out to Mike for introducing me to the song “Meet me in Stockholm,” which will probably remain a top hit in my playlist. Cool people are everywhere these days, but Andover seriously was awesome. Also, a huge thanks to you for putting left over enchiladas in the fridge because they lasted me a solid day on the trail upon forcing myself to leave town. 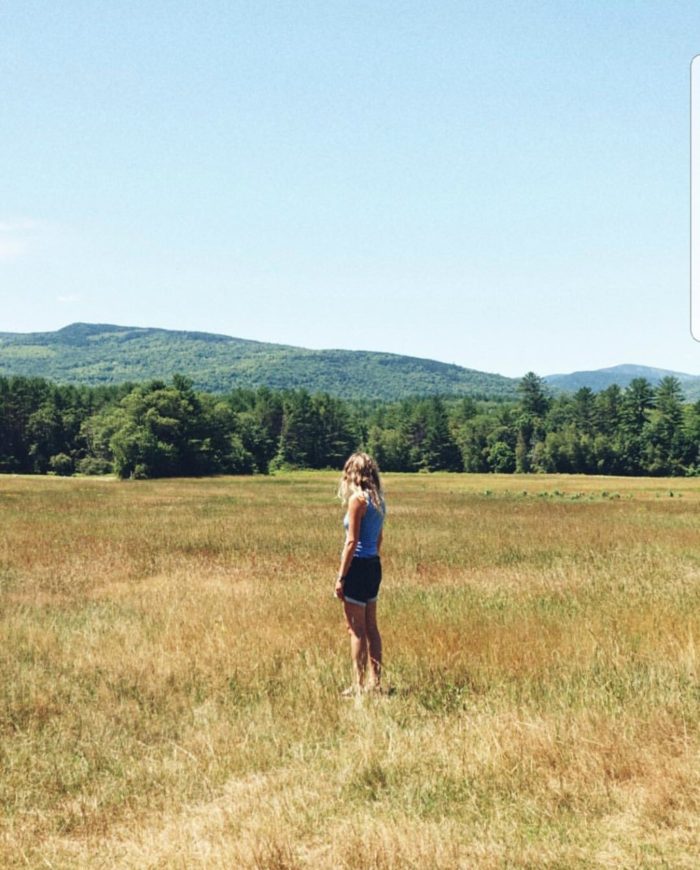 Our zero in Andover; photo thanks to Dreamer.

Maine hosted many firsts for me, so that means it’s bound to have been emotional. I’m thankful for the views, the good company, and nature for transforming me from over-eyebrow-pencil-using-person to forever-hungry-hiker-trash-in-training type. I was getting too comfortable in my day-to-day life back home and this is the complete opposite. I’ve learned a lot from Maine, and already feel quite accomplished. I can’t imagine the feeling of walking through 13 more states just yet, but I’m more than ready to take on the challenge. Over and out – thanks, Maine!