I woke up still full from the night before, which I attributed to not hiking for 10 hours. I spent most of the day organizing my food into a box I’ll send ahead to Monson, Maine. The 100 mile wilderness doesn’t have any resupply points or roads going in or out, so I’m planning for 7 days of food and switching out my sleeping bag back to my smaller one.

We watched TV most of the day and hung out on the couch. In the afternoon, Louis and I dressed up, cooked dinner, and had a date night to celebrate our anniversary last month. I put on foundation, eyeliner, and mascara for the first time in 4 months. It felt strange to spend so much time looking at my reflection in the mirror. 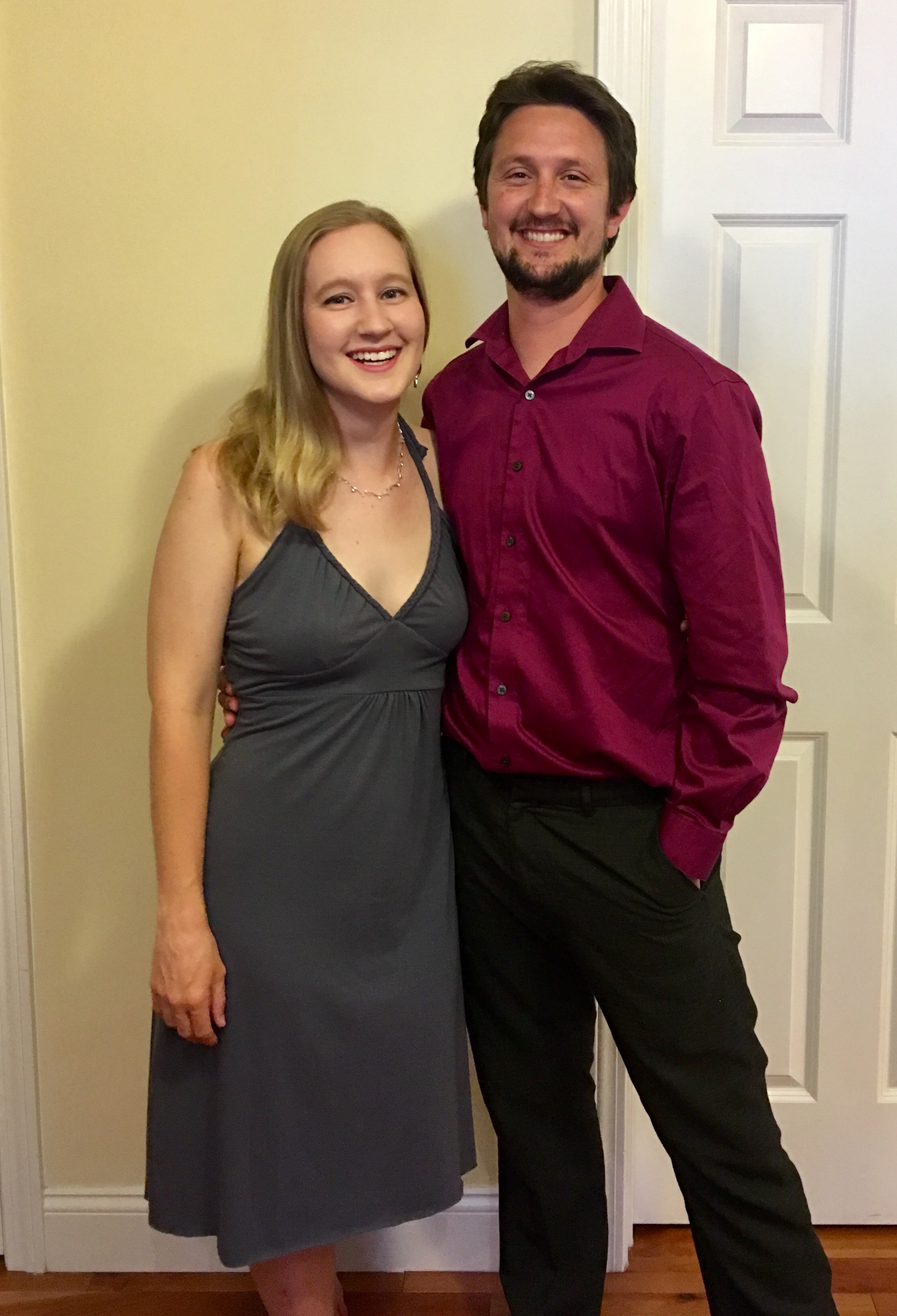 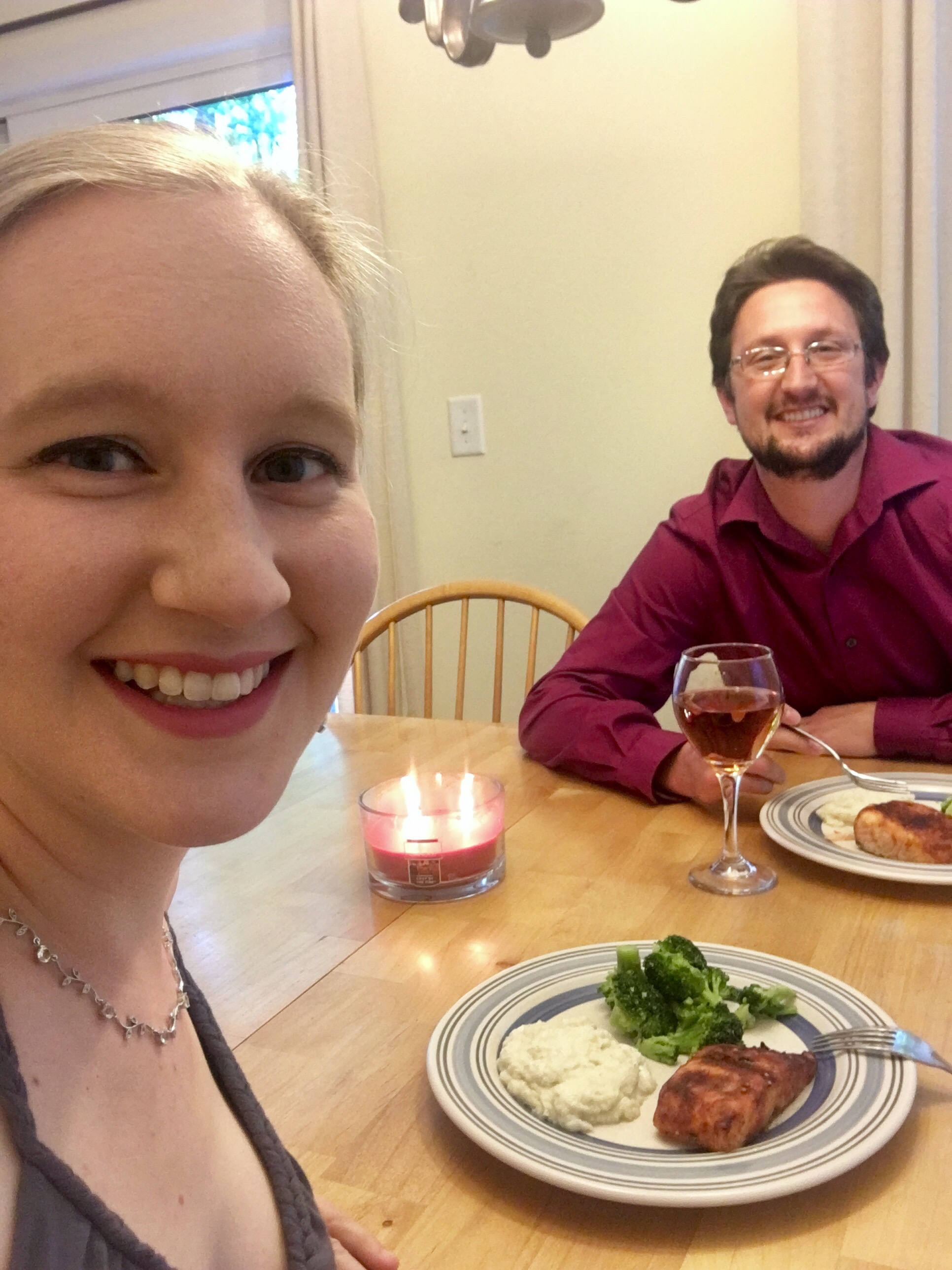 Louis and I sat at the table with my laptop and went through a list of things we need to bring or buy before leaving for Grenada. It felt great to do simple, normal things with Louis. This is what I miss the most. I finished getting my food sorted out and packed my pack before bed.

We packed up and got out of the house by 9am. We swung by the post office on the way out so Rash and Piñata could mail their warm gear home, and I could mail ahead my warm sleeping bag and 7 days of food ahead to Monson, Maine (the start of the 100 mile wilderness). Instead of starting where we left off, Louis brought us around the river that was at the road. The river had risen substantially with the rain, and the videos we saw on Facebook indicated it wasn’t safe to try and cross. The flooding had also washed out a few roads in town. 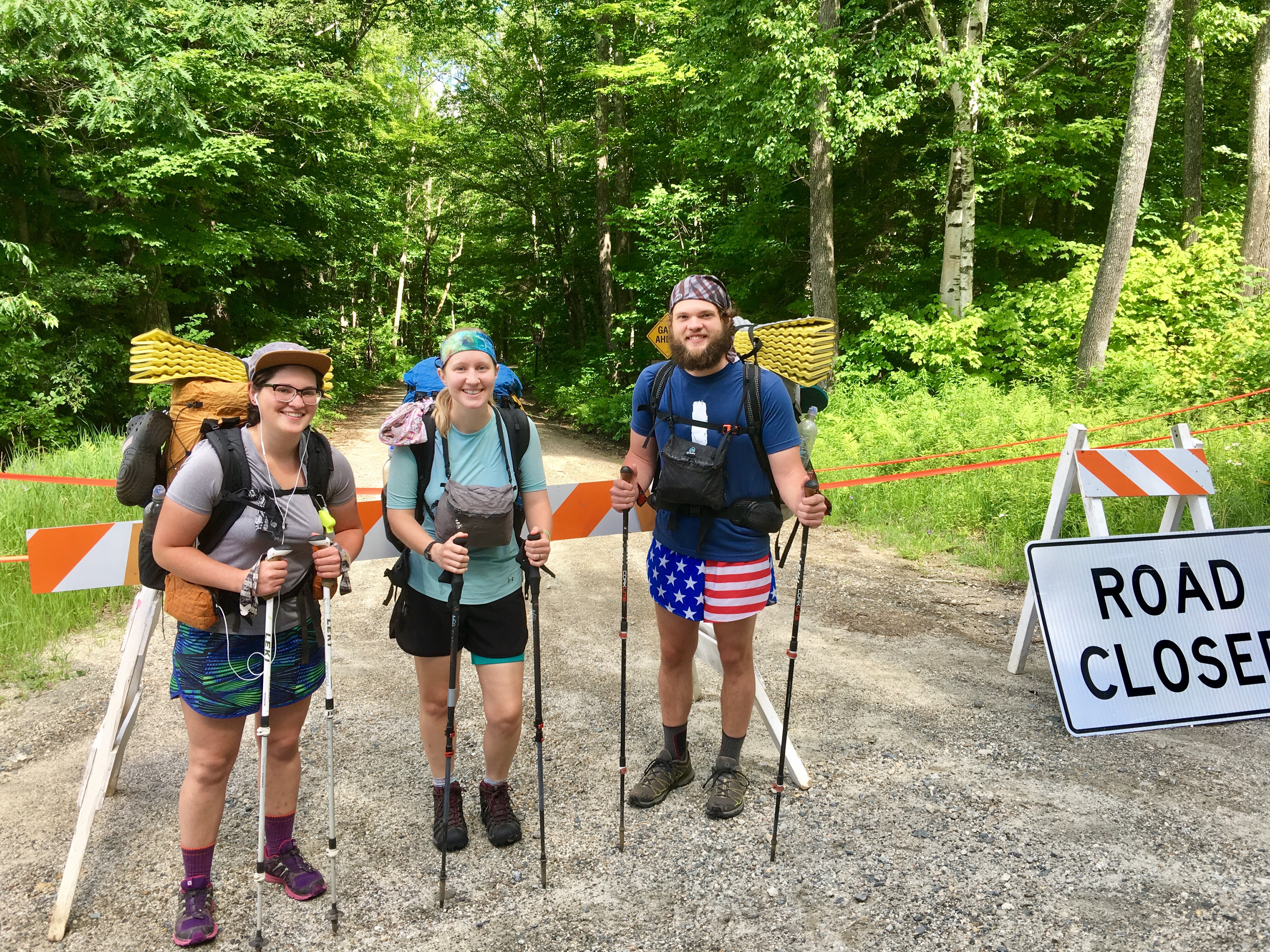 Rash, Piñata, and I next to the road closed sign 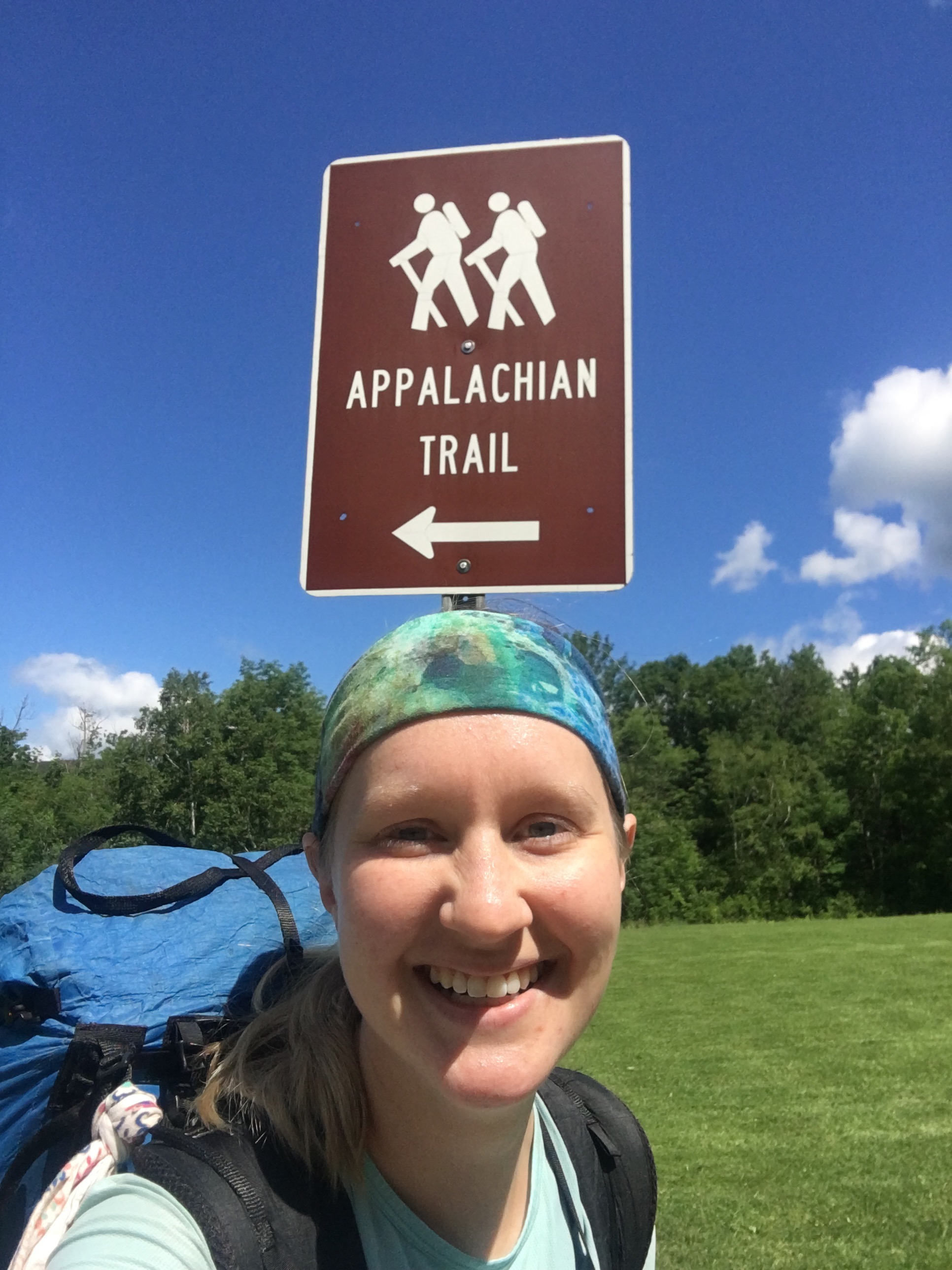 I said a difficult goodbye to Louis. I see him again in 4 weeks, which is shorter than the 6 weeks we just did, but still hard. I road walked to the trail head, and got my shoes wet trudging through mud and puddles. Mt Moosilauke is a 5 mile climb, but it wasn’t the worst climb I’ve done. There were tons of day hikers out because of the holiday weekend, and the weather was gorgeous. The path was rocky but well hiked, and the scenery was beautiful. The day hikers coming south were all wearing jackets. I stopped to talk to a couple where the woman was wearing an Ironman hat, and a trio of older ladies. When I got to the southern summit, I decided to take the side trail to the view since it was labeled as 0.1 miles. That was a big mistake since it was actually 0.2-0.3 and rocky the whole way. The view was beautiful and windy. 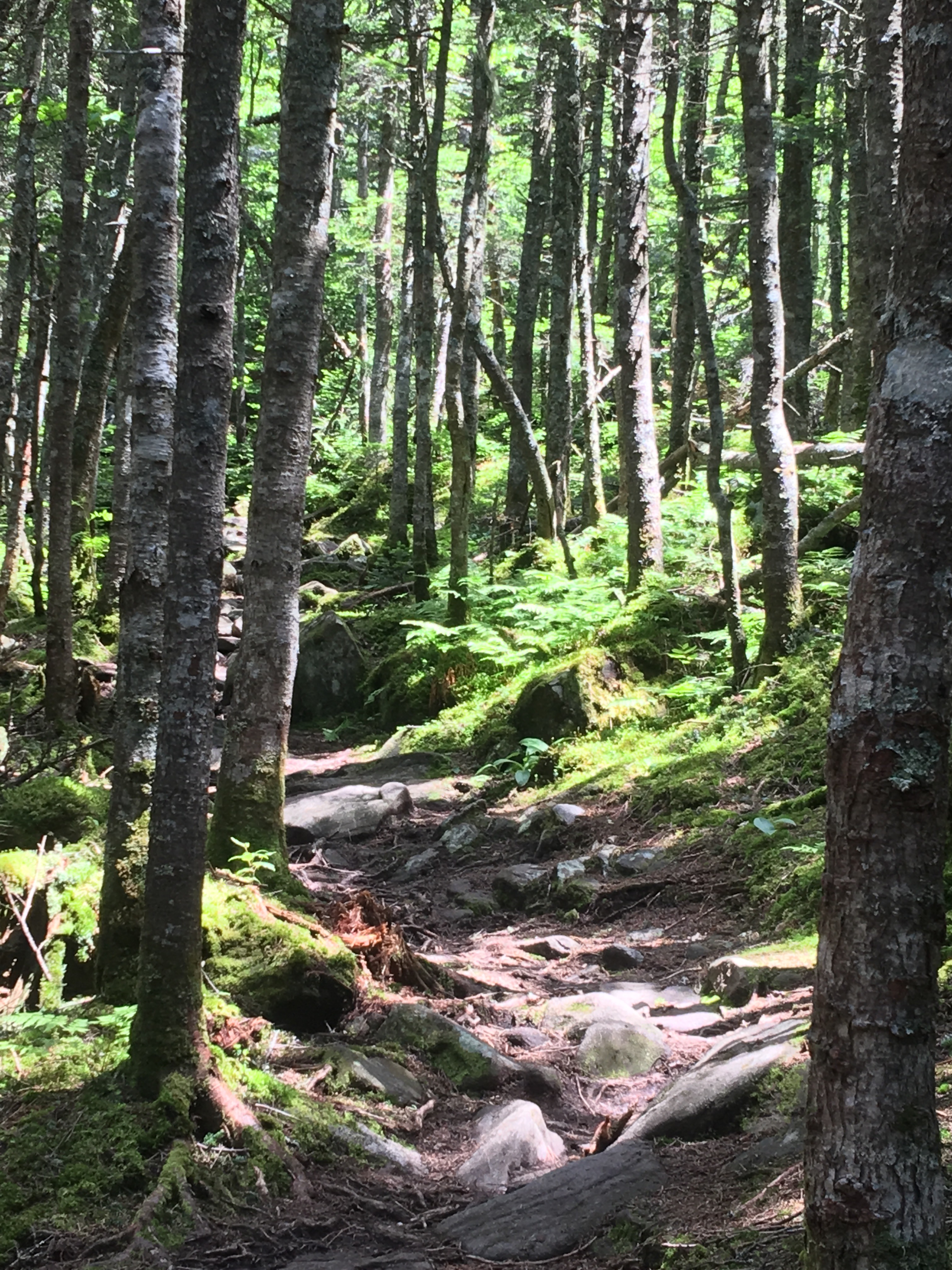 The sun through the trees 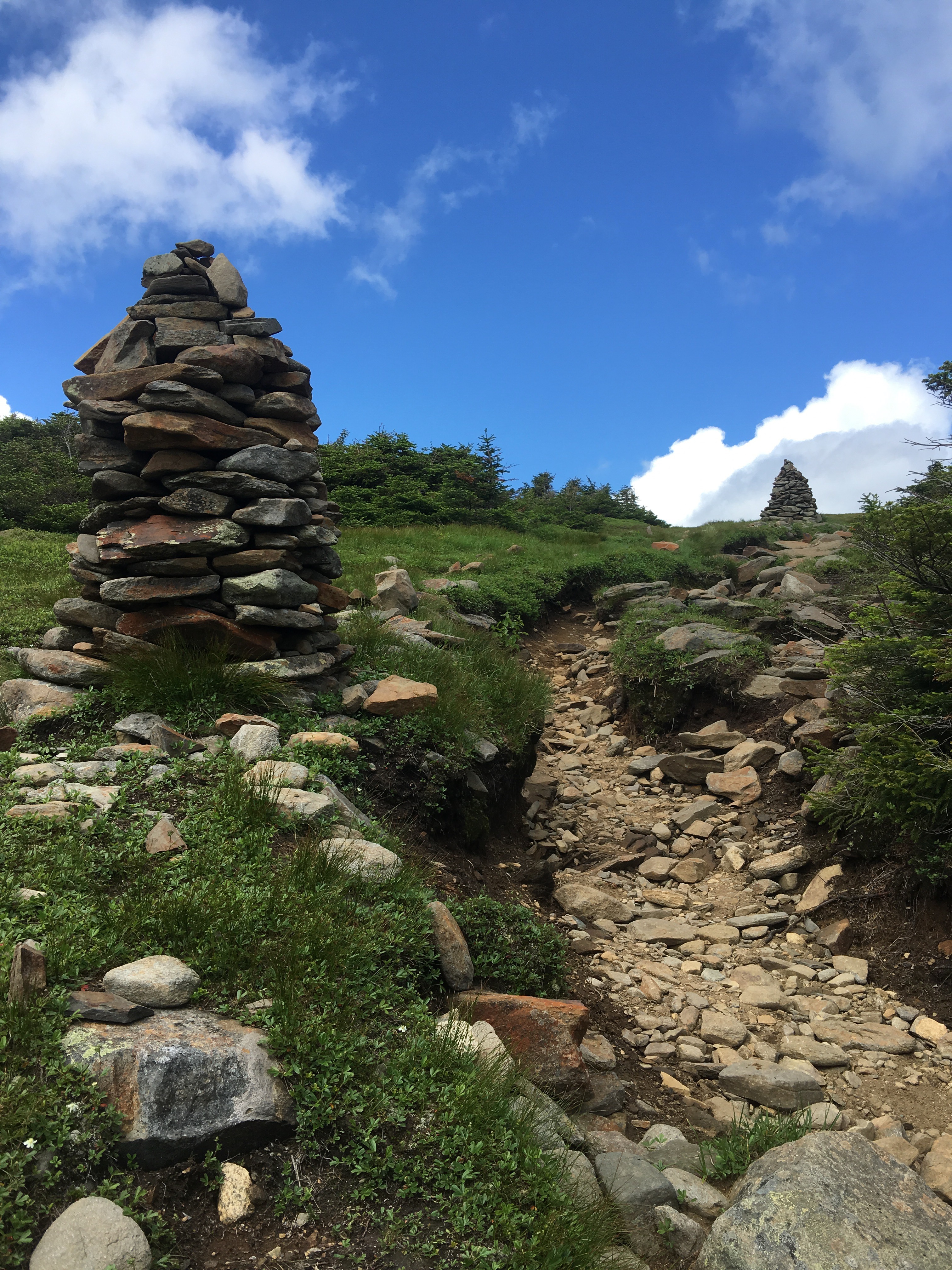 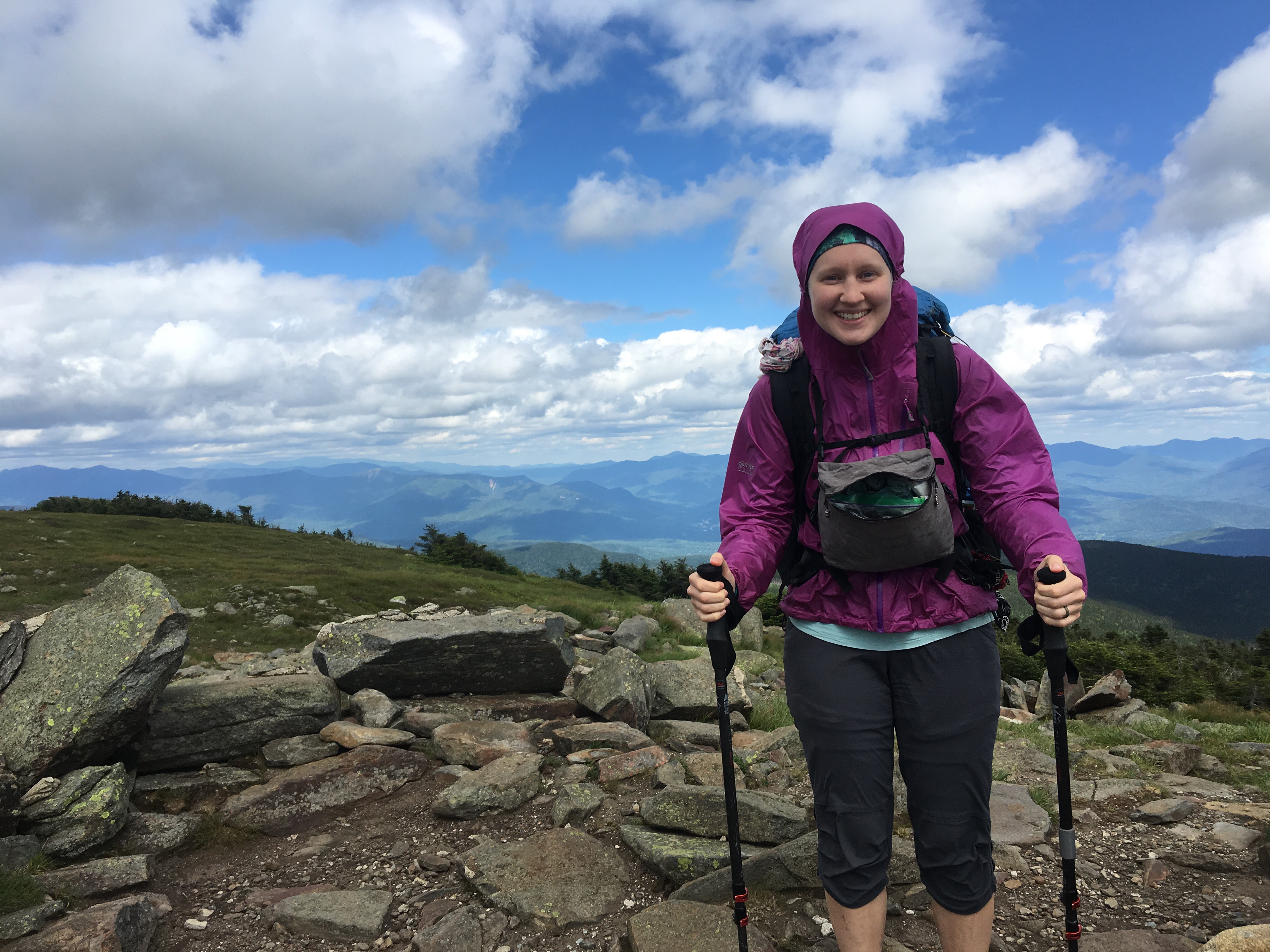 I hiked the short way to the northern summit and found Rash and Piñata waving at me. I also found a golden retriever, who I stopped to pet, and Piñata joined me as we talked to the family. We joined Rash sheltered behind a small, manmade rock wall formation, but we didn’t linger. 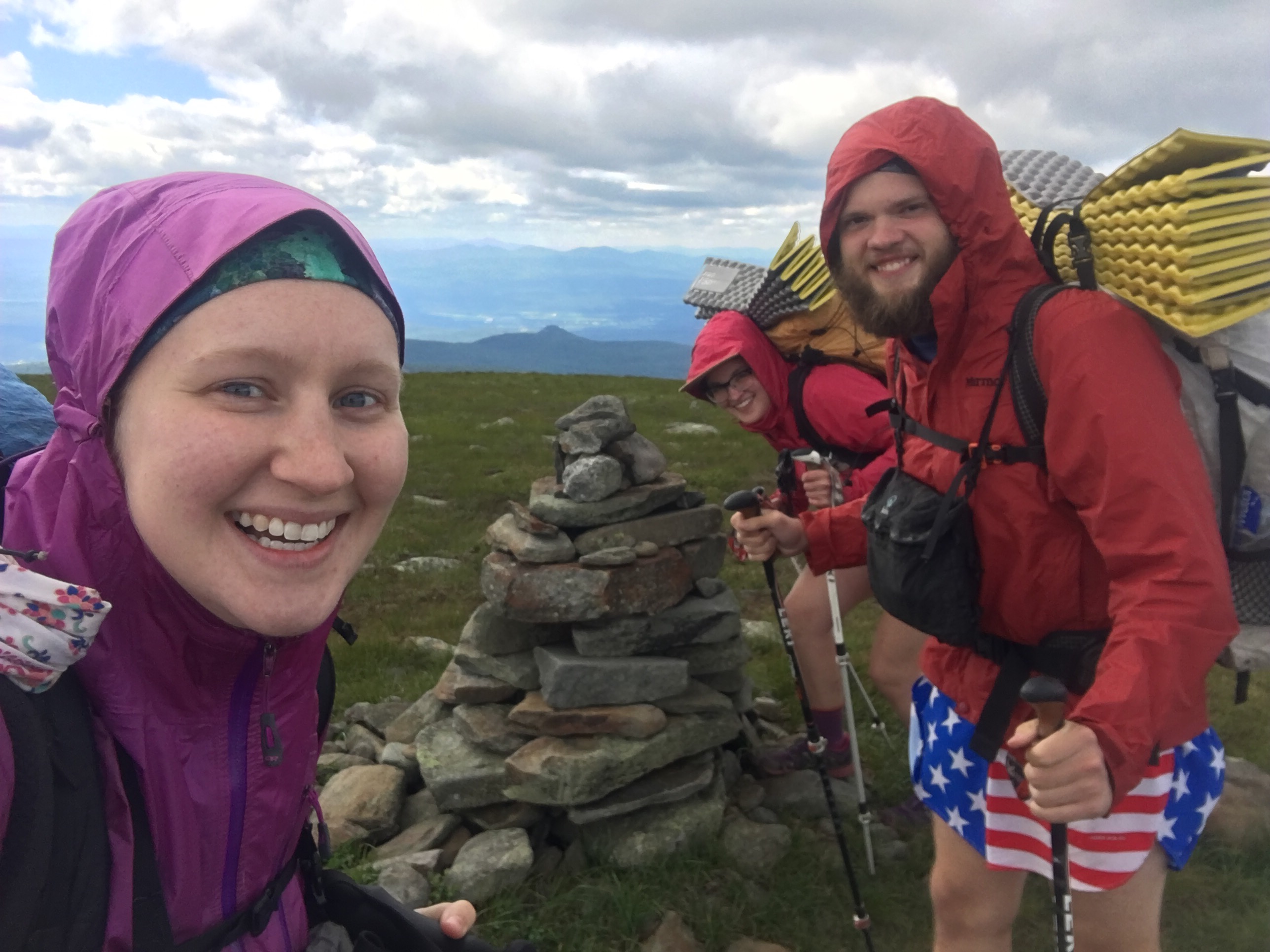 The three of us posing with a carin 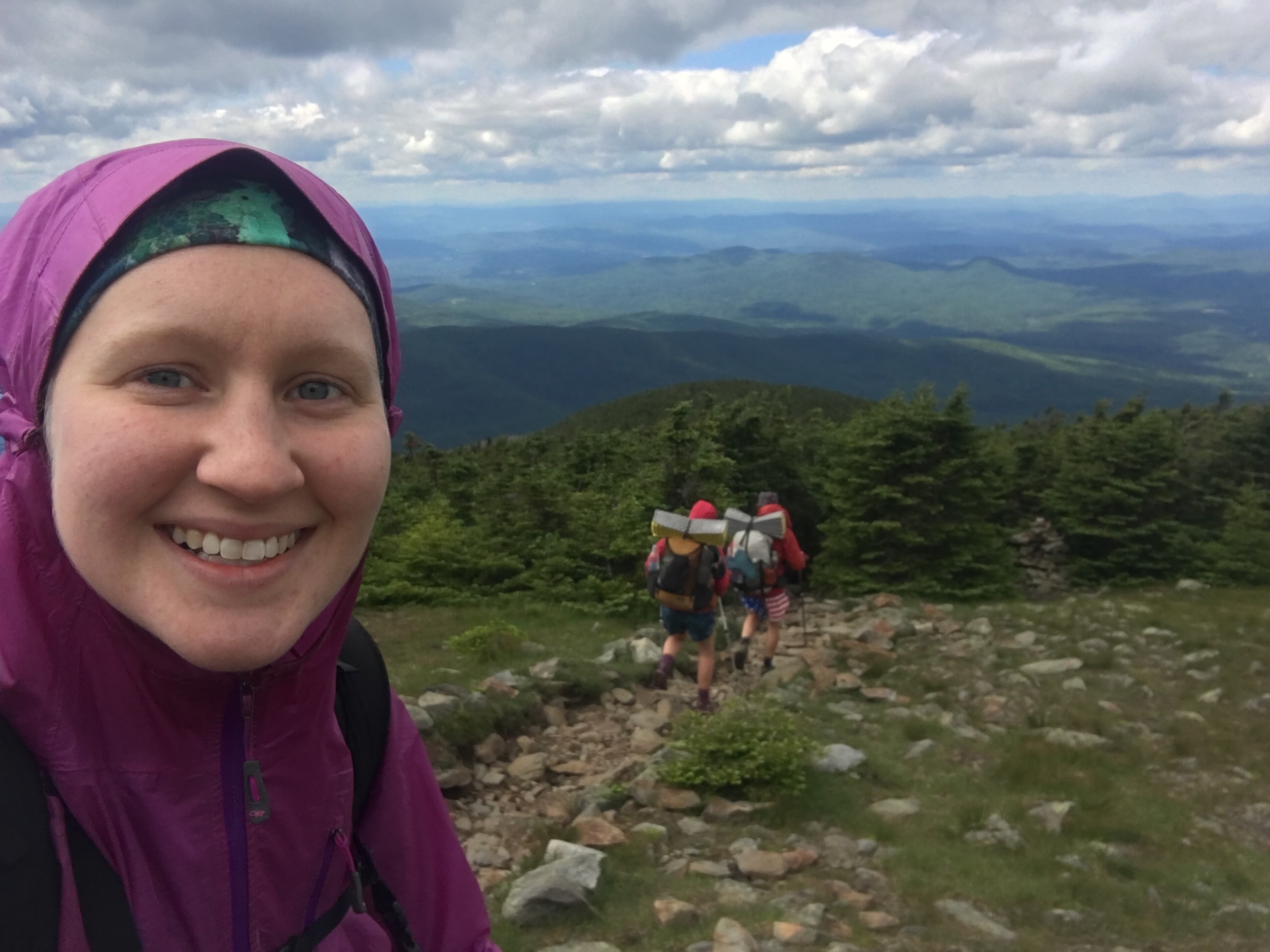 The south side of Moosilauke tapers off gradually, but gets very steep. I hiked ahead, and stopped at the shelter on the trail. I talked with a section hiker who made a fire, and waited for Rash and Piñata who didn’t show. I figured they just used the privy which was right on the trail and hiked on, so I continued down the mountain.

The descent was treacherous. The rocks were wet from the rain. A few times I checked Guthooks to see how far I’d gone, and I thought the app wasn’t updating properly because it showed me in almost the same place as last time I checked it. The app wasn’t broken, I was just going that slow. 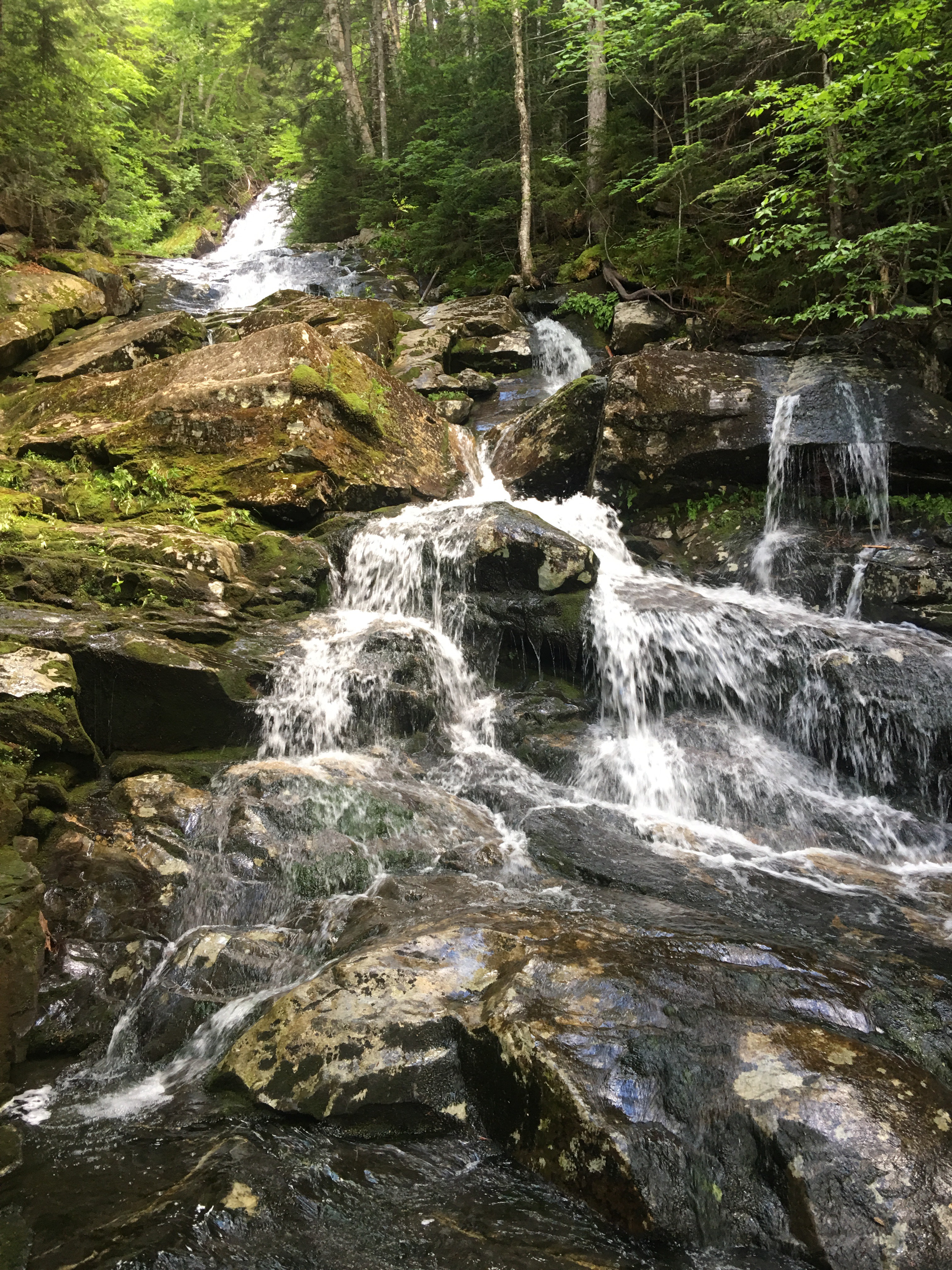 The waterfall along the trail was beautiful. I filled up water at the bottom, and met Rash and Piñata at the campsite they found. We ate dinner and turned in early, while it was still light out.

I woke up several times trying to get my temperature adjusted in my mom’s sleeping bag. It’s way too warm zipped up, so I had to unzip it at various lengths to stay cool. I’m still not sleeping well after the bear incident, so I woke up to every stick crunch I heard. Rash and Piñata have mentioned they haven’t slept well after the bear incident either, so at least I’m not the only one.

The hiking in the morning was extremely slow and I took lots of breaks. It was steep, the weather was nice, and I was in the mood to sit on a rock in the sun, not hike. Chef Boyardee (Ravioli) and another hiker passed me. They are planning on doing 16 miles today semi-slackpacking from Chet’s place. I finally made it over Wolf Mountain, and passed Lilo and Stitch. I stopped to chat for a bit and then moved on.

I met Rash and Piñata at the shelter, and Lilo and Stitch were close behind. We met a couple who broke one of their tent poles, and the man from the shelter yesterday who made the fire helped them fix it. We snacked for a bit then pushed onto Mt Kinsman.

The trail parallels a river for a while, and it’s not well marked. Once it broke off from the river, it was easier to follow, but much harder to climb. There was a lot of hand over hand climbing and rock scrambling. I caught up with Rash and Piñata and hiked with them the rest of the way up. It was slow going and treacherous. One slip could send you halfway down the mountain. We stopped at the south peak and took pictures and enjoyed the view. A glider came very close to the summit and circled around. We hiked onto the northern peak but didn’t get a view. 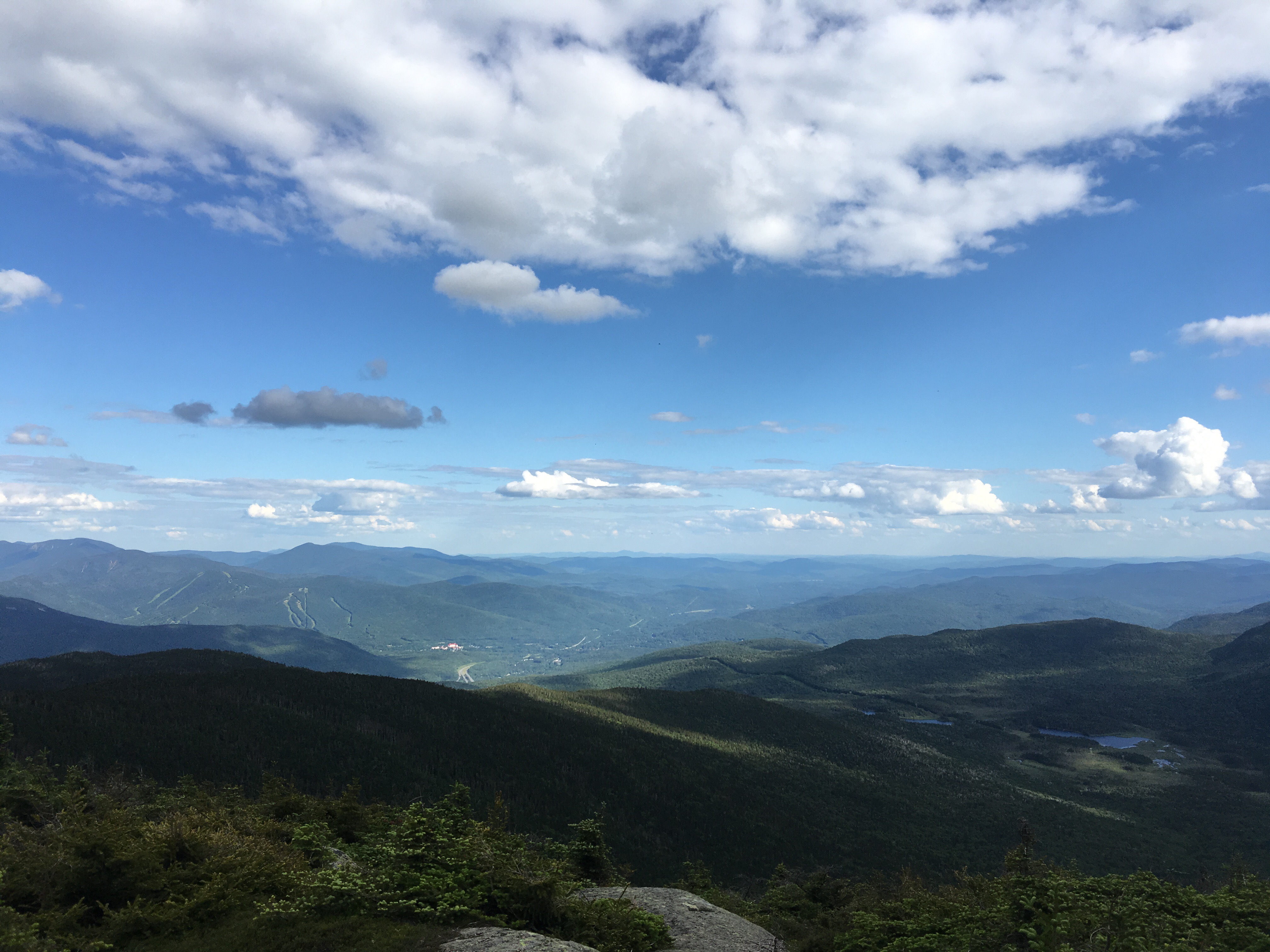 The view from the south peak 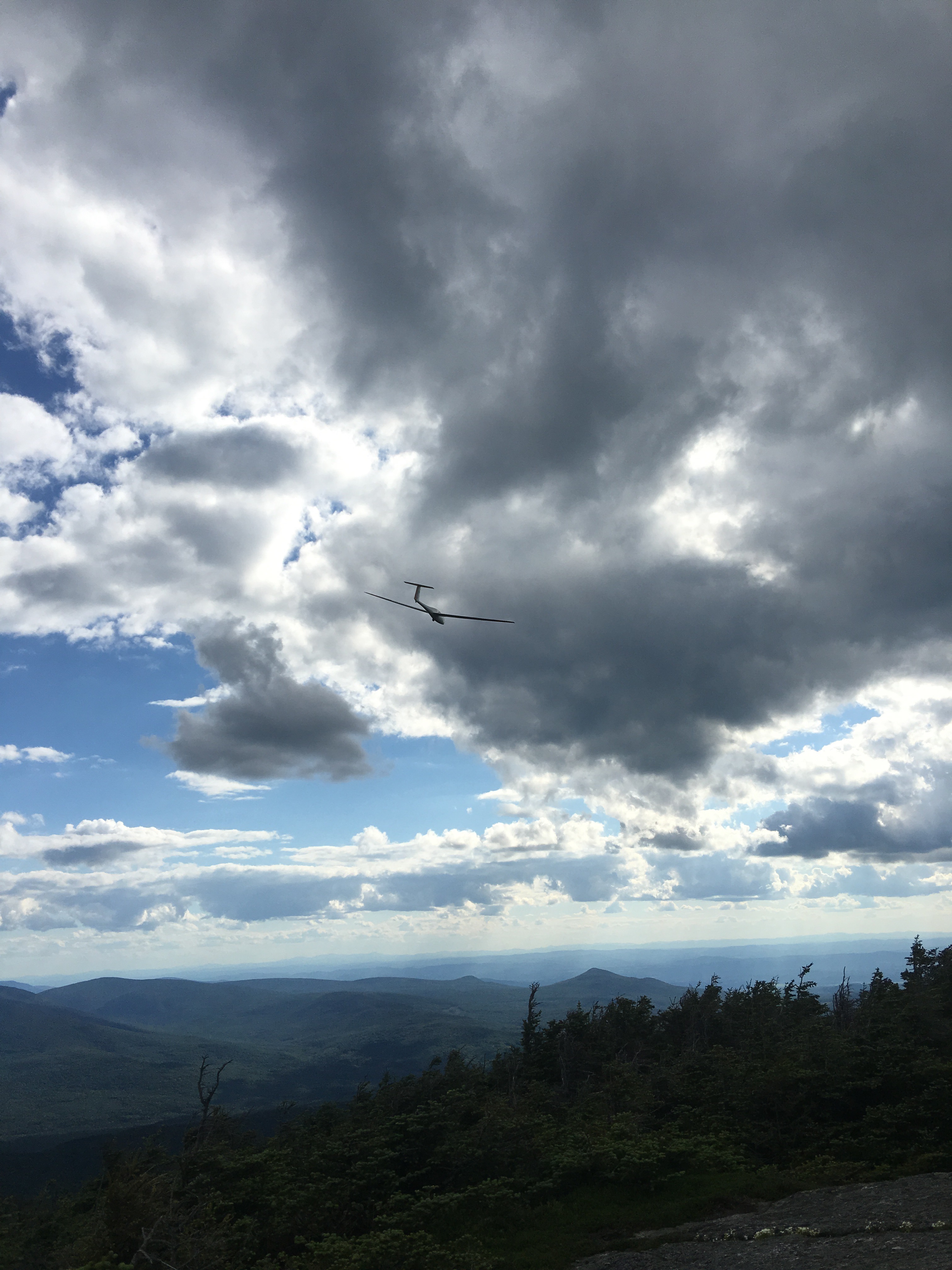 Our hike partway down the mountain to the shelter was short. The shelter normally has a caretaker, but we didn’t find anyone. Birks and Medicine Man were in the shelter. There was a group of young boys tenting, and a mother and young son that ended up hiking on. I had mac and cheese and we hammocked behind the shelter next to a large pond with lots of lily pads.