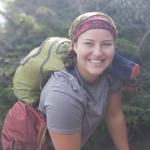 Highlights from Week One

Finally, a blog post I can write from trail! I just finished up my first week on the AT. As I write this, I am taking a much-needed rest at Hostel Around the Bend at mile 69 (nice). There are already so many things I can tell you about week one, but I’m going to try and summarize three highlights.

Anyone who has planned or done a thru hike of the AT has heard about the dreaded approach trail from Amicalola Falls. It’s 8.5 miles of up and down until you reach the official start of the AT on Springer Mountain.

I can honestly say that I think backpacking in New England broke me. I really didn’t find the approach trail to be that bad. Yes, there were some crazy uphills, but no rock scrambles! The trail was nice and well maintained.

I sumitted Springer around two p.m., where I met a lovely ridge runner who took my picture and told me to come back for the sunset that night. I made camp at springer mountain shelter 0.2 miles from the summit.

At about 7:30 p.m. I made the small trek back up Springer and hung out at the top with a few of my fellow hikers. There was a quiet calm that settled over us as we watched the sun set over the Georgia mountains. It was almost like you could feel what everyone was thinking, a shared sense that this was the first night before our lives would take a new direction northwards. 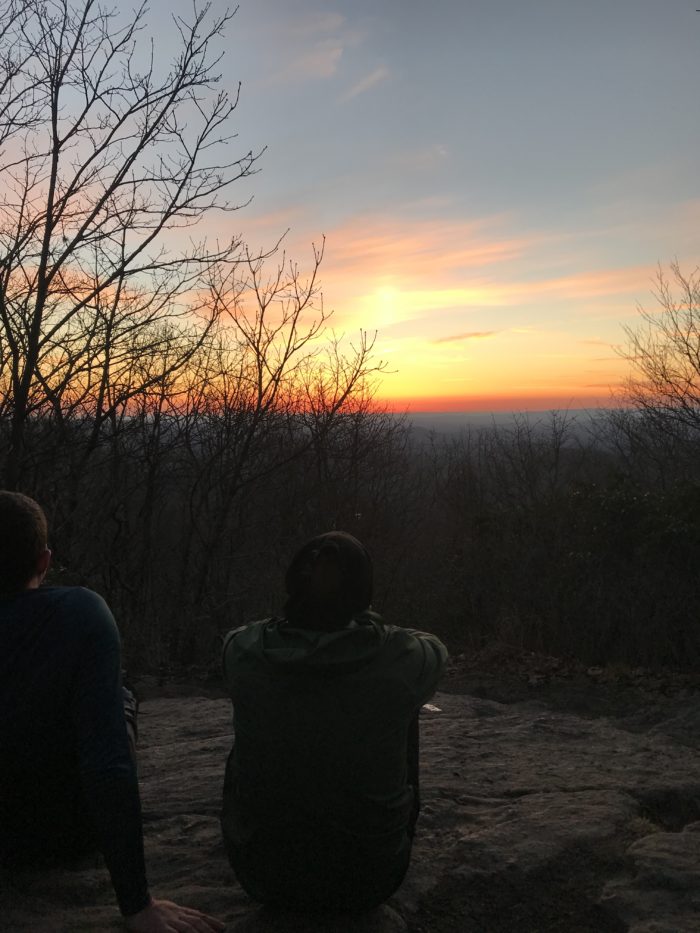 My official first day on the AT started bright and early with a splash of color across the sky as I emerged from my tent. By the time I was finished the clouds had rolled in, foreshadowing the storm that was predicted later in the day.

I cruised the four miles downhill to the first gap and checked my weather app and saw the storm was going to come in a bit earlier. I was four miles away from a shelter and decided to book it there to try and get a spot for the night.

Not 15 minutes later, the sky opened up and the downpour started. This was quickly followed by booming thunder and scary lighting. I hauled butt out of there and got to camp around one p.m. Luckily, there was still room in the shelter. 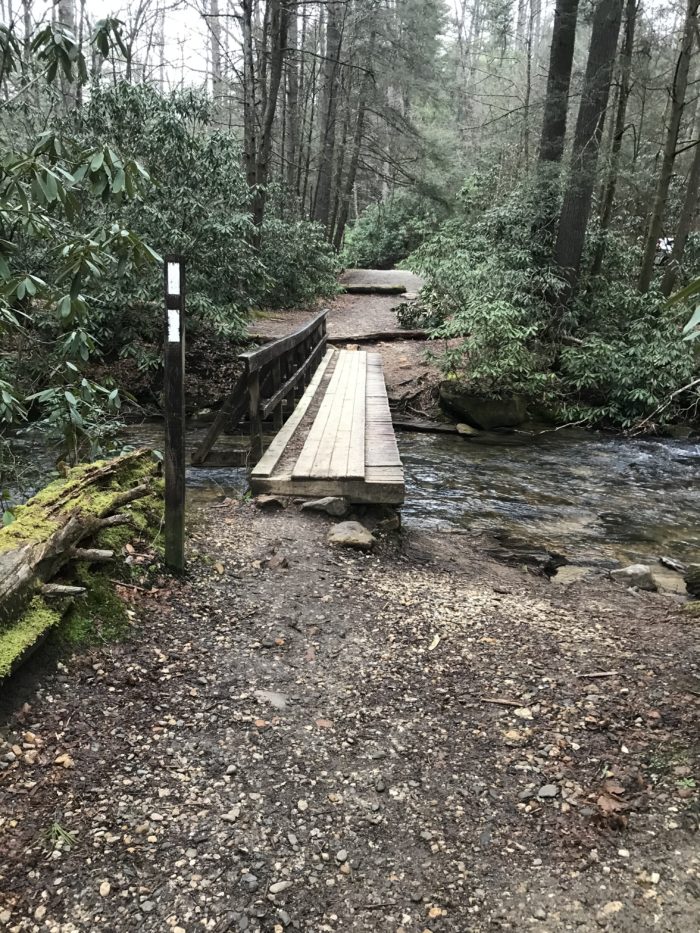 Calm before the storm. Not many pictures taken this day, only fast hiking to avoid the rain.

So, out of all this, why is the highlight of the day my sit pad? When I went to cook dinner at five, the rain had calmed to a gentle sprinkle. I brought my stuff to the table outside of the shelter to cook. Someone else at the table warned me the seats were wet so I smiled, unfurled my sit pad, and enjoyed a warm seat after a long, cold, day.

Between day two and my next highlight, I met multiple dogs, resupplied at Neel Gap, and got to know my fellow hikers better. On day six I decided to hike to Blue Mountain shelter and zero there the next day to wait out a killer storm that was coming in.

The storm came in that night. I slept through it soundly thanks to my earplugs, but did wake up a bit wet even though I was in a shelter.

The brutal sideways rain continued into the morning, and I didn’t get out of my sleeping bag until nine a.m., typical of any zero day. People who had been in the shelter the night before headed out and around eleven groups of cold wet hikers rolled in.

In classic Carly fashion, I was bored around noon and decided I was going to make a fire. Everyone in the shelter was skeptical and rightly so: it was still sprinkling and all the wood was soaking wet.

I, however, am from a family of avid fire lovers. I fascinated a group of section hikers staying at the shelter by not only having the fire started within the half-hour but maintaining it until eight p.m. that night despite the rain coming in on and off.

With that being said, I’m excited to introduce myself as Smokey’s Nemesis, Smokey for short. Only YOU can start fires, in designated fire pits of course! 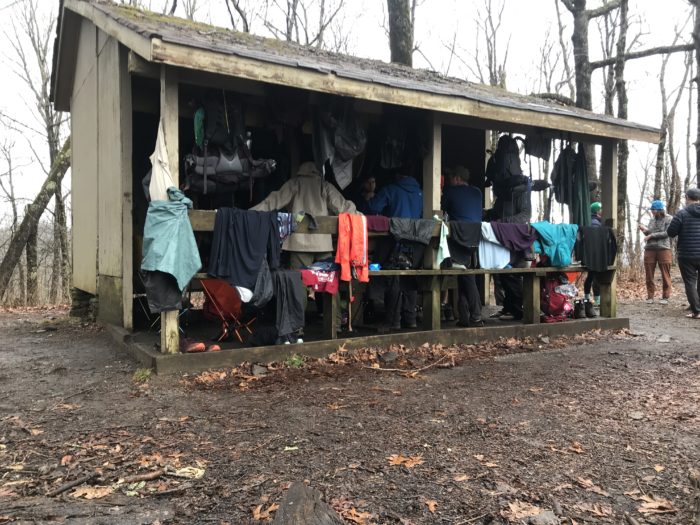 The scene at Blue Mountain shelter as hikers attempt to try out their wet gear.

Not a highlight but a diabetes update:

Along with all the cool, fun, and unique experiences I am sharing, I also want to make a habit of sharing some diabetes highs and lows with you all so I can use this platform to highlight what goes into making a backpacking trip work as a T1D. If this is your first time reading my stuff, feel free to go back to my post on Diabetic Resupplies to get an overview of diabetes.

As expected, the first few days are always an adjustment for any backpacker, and it’s no different for a diabetic. I definitely was worried about lows during the day and at night. During the day because who likes to go low while hiking, and at night because the last thing I want to do is be eating a midnight snack in bear country.

I was able to get a pretty good insulin routine down during the day and have had no lows so far. I had one high blood sugar the second night but was able to manage it, biggest downside is having to get up to pee a million times.

Well, I hope you have enjoyed the update! Thank you for bearing with the quality of my posts until I can figure out posting from my phone better. Until next time.

Hey guys, what's good? My name is Carly and I’m wicked excited to be sharing my AT adventure with you! I was originally supposed to hike the AT in March of 2021. However, after one glorious season as a snowmaker and a fabulously broken leg, I unfortunately had to postpone until 2022. Patience has never been a virtue of mine but here we are a year later, gearing up to start my NOBO thru-hike of the AT! I grew up in Boston and spent the better part of the last five years in upstate New York exploring the Adirondacks with my university's outing club. It was here I developed a deep love of all things outdoors, including backpacking, skiing, and climbing. A few fun facts about me: My favorite summit snack is a cucumber, I’m a type one diabetic, and I am a firm proponent of carrying peanut butter in a Ziploc bag while backpacking. Happy trails!