Highs and Lows Through Pennsylvania

I charged headlong into Pennsylvania with a plan to meet Slinky, whom I met early in my trek. Slinky had hiked a long southern portion of the AT, and resides in Maryland. As I was passing Harpers Ferry, it was clear that the timing for a brief meetup on trail would work out nicely.

Slinky and 100 Miles of Pennsylvania

Slinky and I met between Caledonia and Pine Grove Furnace state parks in southern Pennsylvania. The next morning we found ourselves at the halfway point of the trail and visited the AT museum. One volunteer on the trail for a day hike strongly encouraged us to pay the spot a visit and I’m glad we did.

The museum has a host of artifacts from AT history, including wooden busts of prominent AT personalities and the old, weather-beaten sign that sat atop Katahdin. I’d be lying if I didn’t say I placed my hand upon that sign and felt the power laden within that beacon that is beckoning me north. 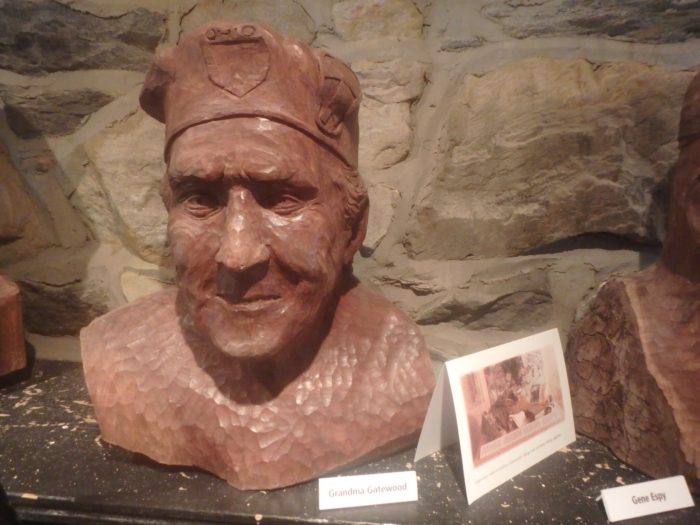 Despite the warning of a naysayer perched atop a rock, we did opt to camp at the backpacker camp outside Boiling Springs. In small clearing at the edge of a field, the elbow bend of the rail line did create some train noise in the night. Slinky was more concerned with a sanitary truck crushing him in his tent while emptying the Porta-Potty, as he was dangerously close to the truck turnaround.

Together we crossed the farmland and gentle pastures across the turnpike and interstate. It was gentle hiking across nice scenery but what I learned from hiking with Slinky through the Smokies and beyond is that he is the type of guy to attract really interesting social interactions. These would range from a sassy girl trying to find a viewpoint that was clearly not Hawk Rock, to the multiple trail alarmists. When Slinky was around I knew something memorable was about to happen. 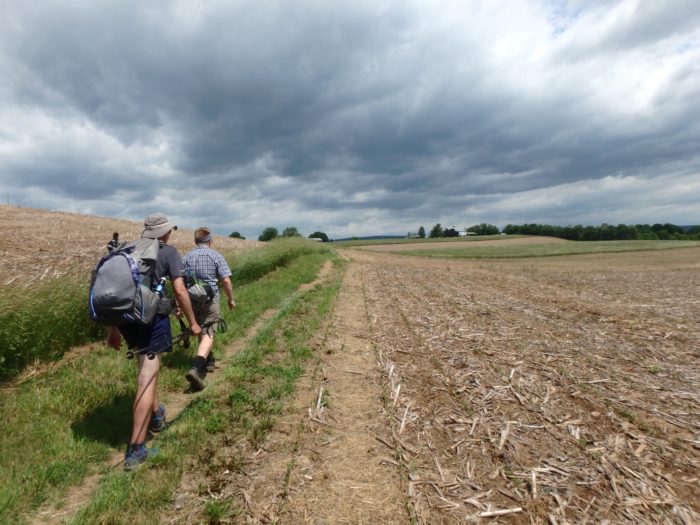 Slinky and PeachFuzz outside Boiling Springs.

We picked up a third, Donut, heading into Duncannon. Of everyone I spoke to, the consensus has been that something about Duncannon is off. We had a great breakfast while waiting for the bar to open so I could retrieve an armload of packages. When the Doyle did open, they actually said, “Oh, so you’re the guy with all the packages.”

After sorting my things we passed through town. The trail goes through a residential area that is lined with churches the entire way. This is radically juxtaposed as we crossed the bridge and made our way to Sheetz for meals to order and light resupply. Let’s just say that the market for topless joints and adult massage parlors is highly saturated in this trail town. 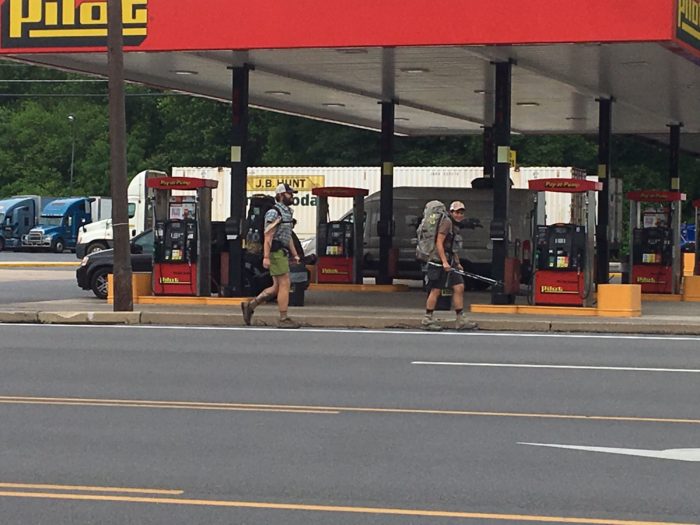 Donut and me trying not to get killed on the highway to Sheetz in Duncannon.

Rock Preview and the Breakup

Out of Duncannon was a rock preview of what was to come through the remainder of Pennsylvania. All in all it was a smooth trail into Pine Grove and the 501 shelter. Slinky parked at the 501, so this was the end of his trip. He did take Donut and me into town for pizza at Do’s and to the market.

There are different approaches that people take when it comes to the social hiking dynamic on trail. One popular approach is to find a group, a crew, or a trail family. Often these are organized fairly early in the trail and begin to function as a cohesive entity. People in these arrangements know when they are part of such groupings when they begin to describe their activities in the plural, and when individual choices take a backseat to group preservation. 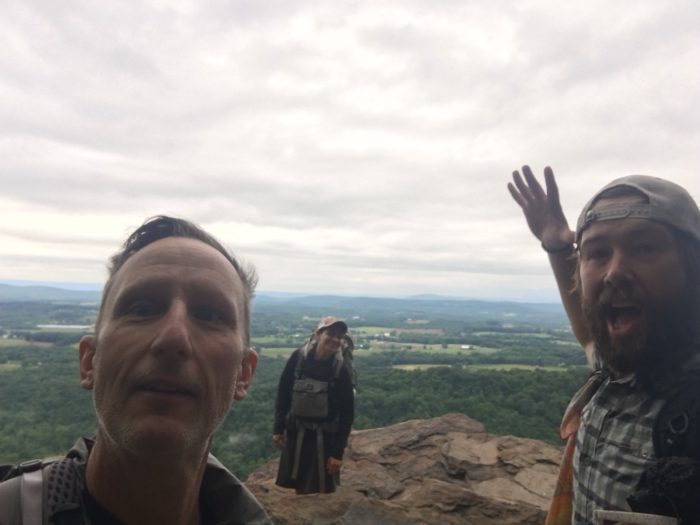 I think that for our brief hike together, Slinky, Donut, and I made a nice group. But fundamentally we are all solo hikers, moving in and out of groupings as is necessary. As Slinky went home, I hung out at the 501 longer than anticipated, lured into comfort when a guy called Josh showed up with fresh bagels with cream cheese.

The trail out of Pine Grove and the 501 began to embody the rocky section of Pennsylvania. It starts gradual and then peaks somewhere heading into the Delaware Water Gap. As Maine has its 100-Mile Wilderness, Pennsylvania can lay claim to its own 100 miles of frustration. The latter half of Pennsylvania is a walk through state game lands, descending into gaps and walking along rocky ridgelines.

Turn for the Worst

After my short day out of 501 toward Port Clinton, it was unseasonably cold and rainy. It was especially frustrating. As I watched my feet across wet rocks, slipping like ball bearings under every step, wet overhanging branches moved across my face like wet mops. It was infuriating. Stopping for a snack eight miles out of town, all I could think about was a warm bed, a hot shower, and a plate full of scrambled eggs.

I stumbled into Port Clinton and wandered around in circles outside the fire station. I found the church pavilion at the edge of town, made out with enough food from the hiker box and a fleece to keep me warm through the night. Not only was I physically tired, I’d become mentally exhausted. The rain continued all night and I was awakened often by the sound of engine-braking diesels on the nearby highway.

There Are Bad Days… and Then There’s Pennsylvania

Honestly, the hiking from Port Clinton to the water gap was the hardest stretch of trail I’ve thus far hiked. It’s not the physicality of the trail, either. After over 1,200 miles I’ve proven myself on the physical level. I took a real mental turn and I had to dig deep psychologically. 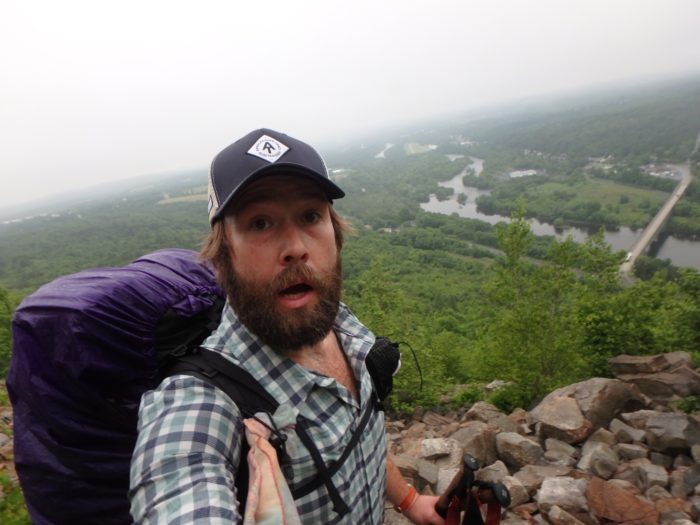 As I mentioned, the poor trail conditions and the presence of rocky terrain require 100 percent concentration. Every moment and every step matters. I met one and heard tales of countless others who took a misstep, found themselves in urgent care, or on their way home. The fact of injury is a real companion.

Reaching this point in my trek, hitting the three-month mark, nearing 1,300 miles, cued me into my hike last year. It was around the same time frame and same mileage mark that I got off the PCT. While the circumstances were much different then as they are now, I couldn’t help but dwell on that moment last season.

Questions about my ability to thru-hike, my dedication, my decision-making process, my body and health, the state of my mind, the fatigue, all these factors cystallized and threw me into a complete mental twist.

Into the Water Gap

I knew I needed to get to Delaware Water Gap as I was planning on meeting a friend with whom I went to graduate school. This small deadline kept me from curling up on the side of the trail and gave me focus. I knew that as soon as I made it to that town I could relax, eat, buy a new pair of shoes, and gain new perspective from a friend. As I came off the ridge and glimpsed into the Delaware River, I met a group of boys near a pond. They were laughing and scooping tadpoles from the water. I had to pause, look into their bucket. In that moment, my mental state, my fatigue, my disintegrating shoes, none of that mattered because we were out here experiencing the joy and magic of the natural world.