I took three zeroes in Harpers Ferry to spend some time with my mom and aunt. They arrived from Minnesota by Amtrak, only 29 hours late, with an unplanned overnight in Chicago. Despite the late arrival we had a nice visit.  We enjoyed the park, took a ghost tour, ate well, and drank local craft beers.  On Sunday we attended Mass at the historic St. Peter’s Church.  Overall we had a great visit but I was eager to get back at it.  In the back of my mind I knew I’d be getting off the trail soon to attend a memorial service in Wisconsin.  This meant I needed to log some big miles to get to Hamburg, Penn., to meet some longtime friends who graciously offered to pick me up and shuttle me to and from Philadelphia. 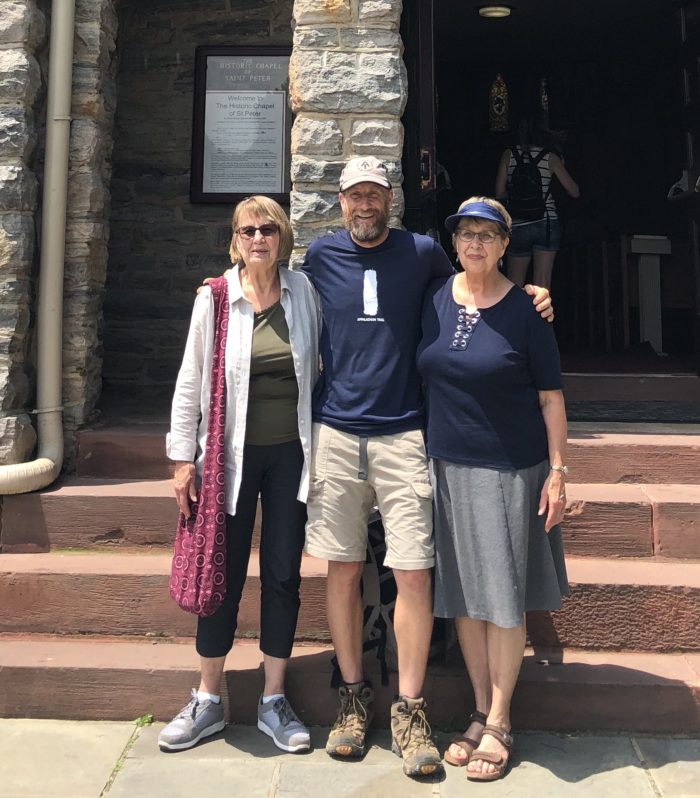 Aunt Elna, me, and mom Judith at St Peter’s. 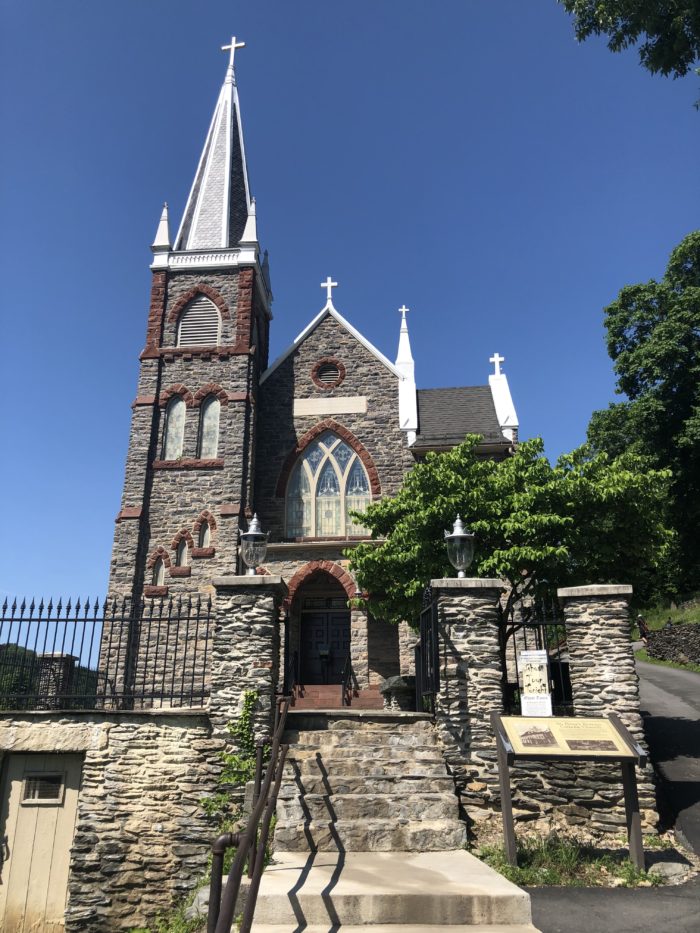 Refreshed and motivated I hit the trail running.  Even with a four-mile nero into Duncannon I covered the 194 miles between Harpers Ferry and Hamburg in nine days, averaging 21.5 miles per day.  On the eight full days of hiking I averaged almost 25 miles a day. Trail legs are a good thing.

Even with the long miles, and the generally wet weather, I enjoyed this solo stretch. The hike was mine again.  Being solo gave me the freedom to start and stop whenever I wanted and hike whatever pace suited me.  The restart also allowed me to meet new hikers.  Some were Nobos from Georgia and others just starting their flip-flop at Harpers, including a fellow Trek writer and Duluthian, “Pulitzer.”  (Clara Hatcher) 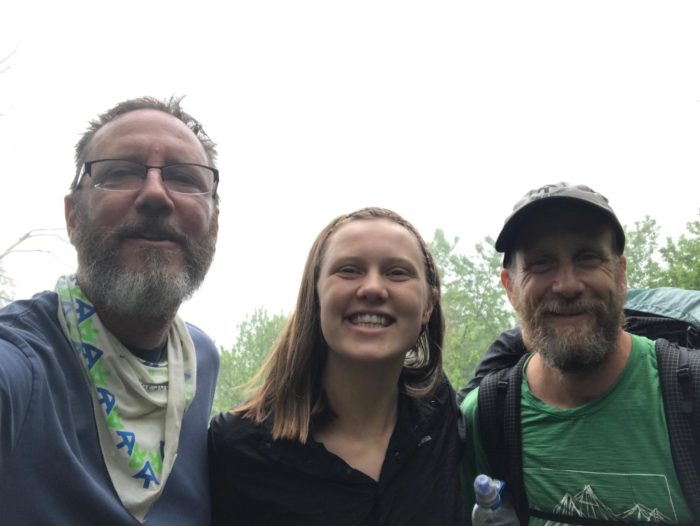 Three days out of Harpers I caught up to Gypsy, Seven, Double-tap, and Whisperer at Timber’s Restaurant.  Solo was fine but it’s great to see “old” trail friends.  Making it even sweeter was that when we went to pay a trail angel had picked up all of our tabs.  Not a small sum for hungry hikers. 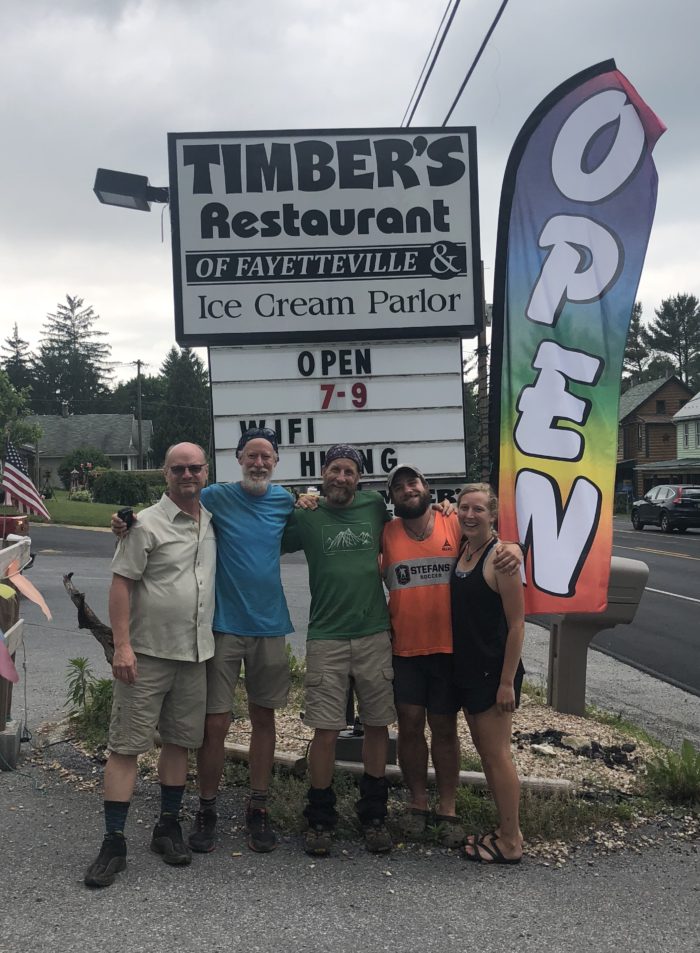 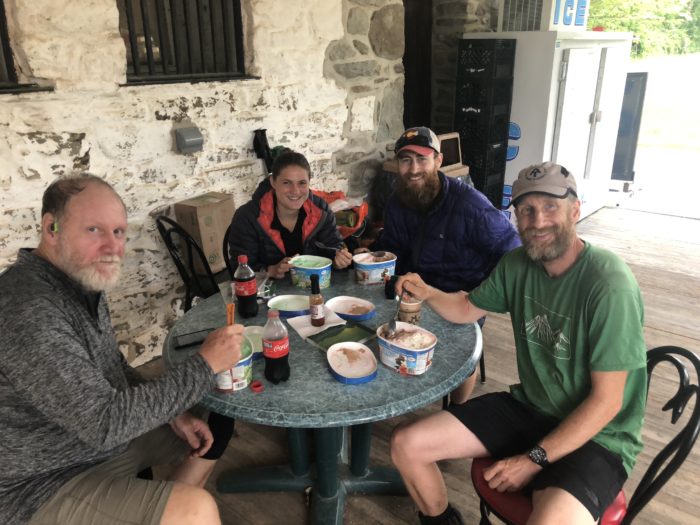 The following day we reached Pine Grove Furnace SP and the famous half-gallon challenge.  I started with Moose, Giggles, and Pepper Jack.  Shortly thereafter  Seven joined in.  With equal parts pride and disgust I finished of a half gallon of neapolitan and raspberry ice cream.  I felt a little ill but managed to put down some chicken tenders and fries afterward.

Two rainy days later I arrived in Duncannon, Pa., a trail town probably best known for the once regal, and now dilapidated, Doyle Hotel.  I had a full day there because I had camped only four miles south the previous night.  I was weighing my options when who walks up but Irish.  He led me to the church basement that also served as a hostel.  I left my gear and proceeded to do laundry, lunch, beers at the Doyle, and re-supply.   Then magic struck again.  Steve, a local, had invited back Seven and Double-tap to camp at his home and enjoy his pool.  He extended the invitation and I was off.  Steve was a great host.  He fed us dinner,  breakfast, and beer, and provided a covered deck to sleep on.  A good thing because of course it rained all night. 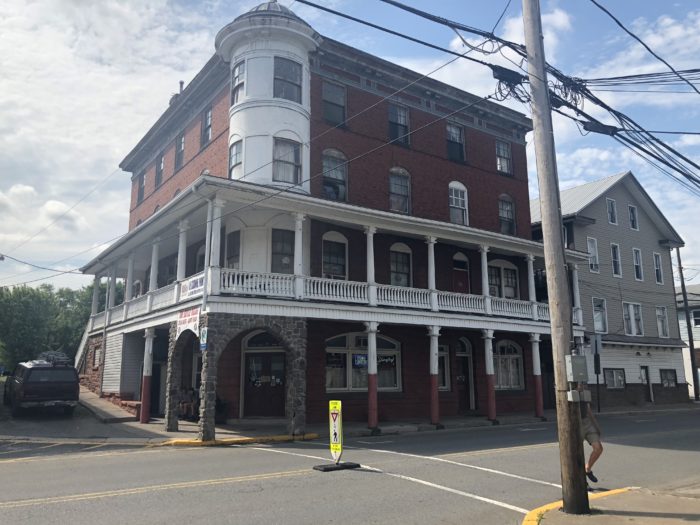 The historic and decrepit Doyle. 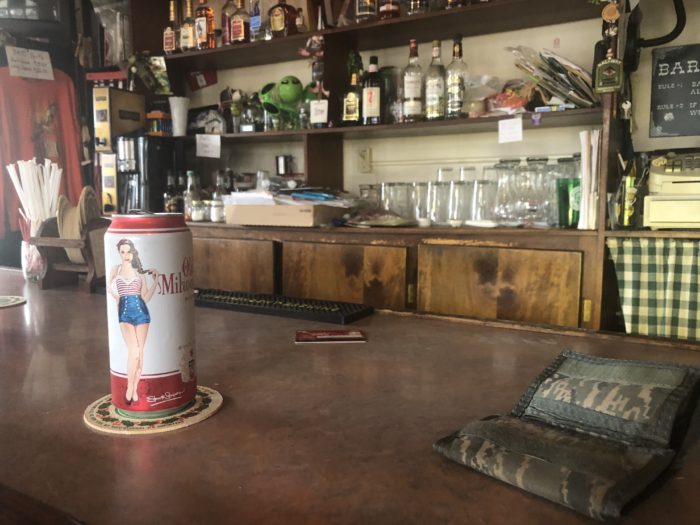 In a place like the Doyle you drink the cheapest beer possible. Old Milwaukee is perfect.

The next day I left early because I had to make that rendezvous with my friends Jerry and Genean at Hamburg.  I covered the distance in three days, averaging nearly 24 miles a day.  The reason I was rushing was twofold; I wanted to get home and to see my family but I also wanted to not fall too far behind my bubble of friends while I was gone.

I spent the last night at the 501 Shelter. This shelter is more bunkhouse than shelter.  It has a shower, charge ports, caretaker, and pizza delivery.  Irish and Whisperer were already there and shared their pizza with me.  By this time the sun had broken through, lifting my spirits.  Everything would have been perfect except for the realization that tomorrow’s hike to Hamburg could my last hike with Irish.  If he kept the same pace while I was gone there would be a 125-mile gap.  He had to keep going to pick up his son in Newark.  Although we agreed the trail worked  in mysterious ways this felt like goodbye.   We exchanged thanks for all the miles, camaraderie, and affirmed future plans to meet in Ireland to “drink Guinness proper.” 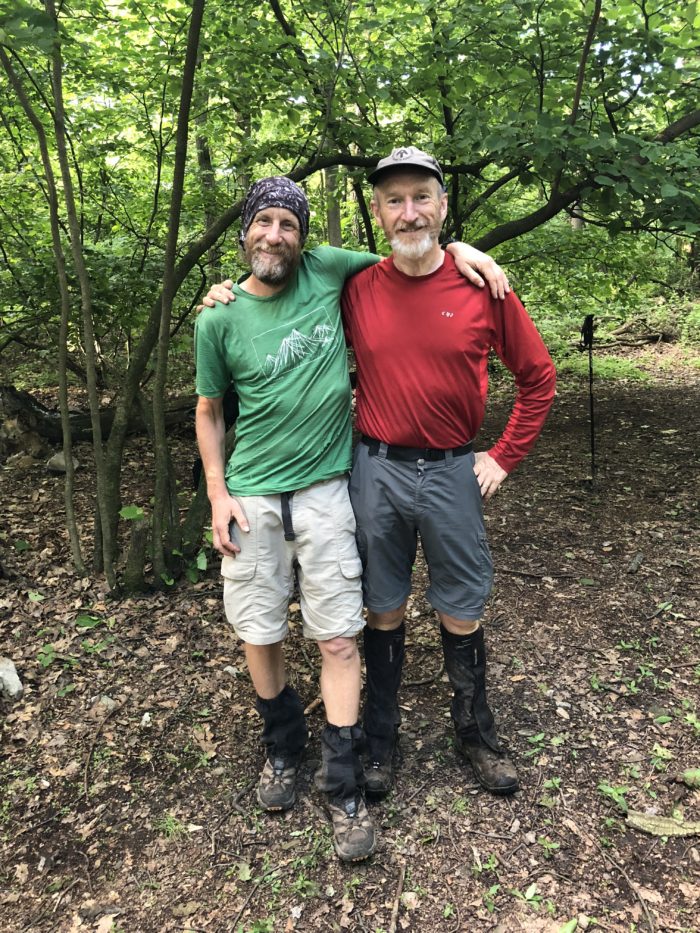 Goodbye to my longtime hiking partner?

I made the rendezvous in Port Clinton.  Genean and Jerry are old friends from my Air Force days.  Genean was Brenda’s best friend.  I don’t think you could find a nicer couple.  Here is the very short version of our stay.  I said “our” because they offered Irish Paul a ride to Walmart to resupply.  That turned into an invite to their house, which turned into an invitation to stay until I got back.  In the meantime their daughter would drive with Paul to Newark and pick up his son.  So this incredible family picked up two hikers, boarded and fed them for six days, made airport runs to Philadelphia and Newark, and made all of us a part of their family. 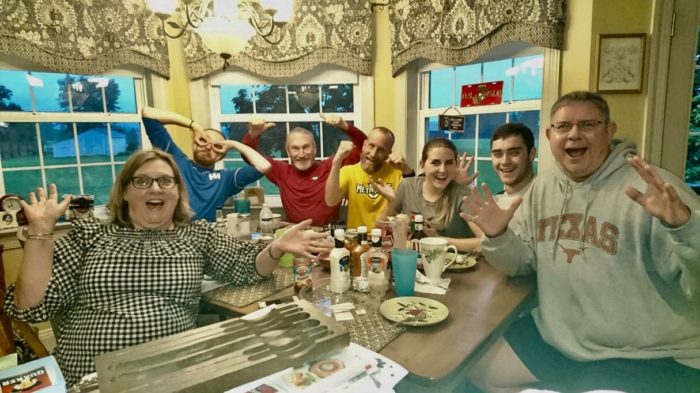 Just a typical meal with the Heskos.

Home for a Celebration of Life

My trip home was successful.  I spent time with both sons, my dog, Dixie, and saw both parents. More importantly, I was there for my family and spoke at Roberta’s service.  I believe my message helped.  It was refined, at least, because I had 1,200 miles to think about life, loss, and acceptance.  I’ll capture all of those thoughts in another post. I was flattered that afterward many people asked what church I normally preached at or how long I’ve been a pastor. 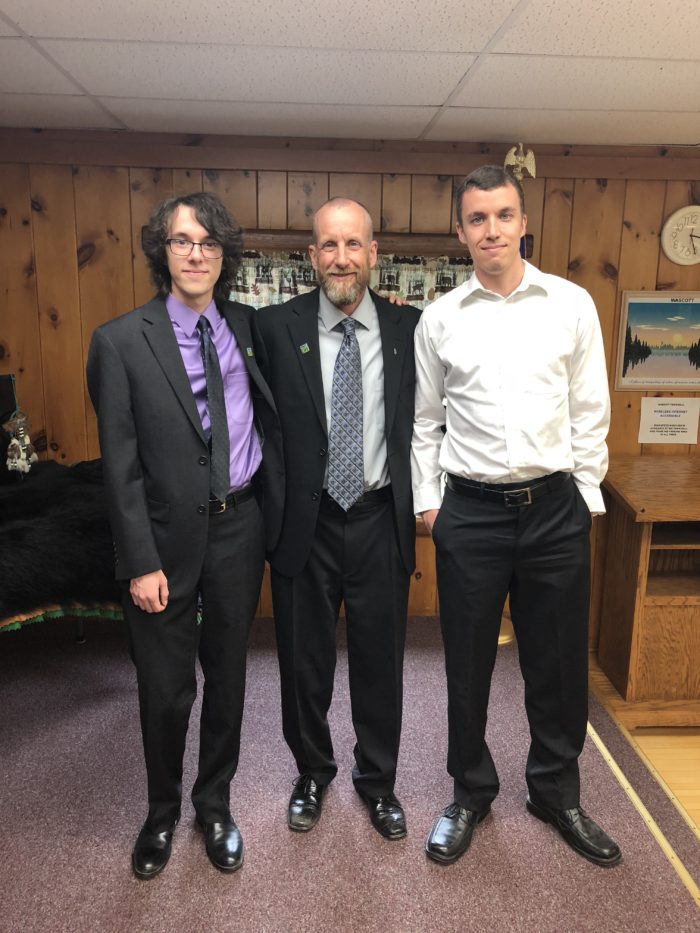 My boys, Nick and Jeff. At Roberta’s celebration of life.

The band is back together.  Irish Paul, Luke, and I are back on trail and prepared for battle with Pennsylvania’s rocks and snakes.  Stay tuned. 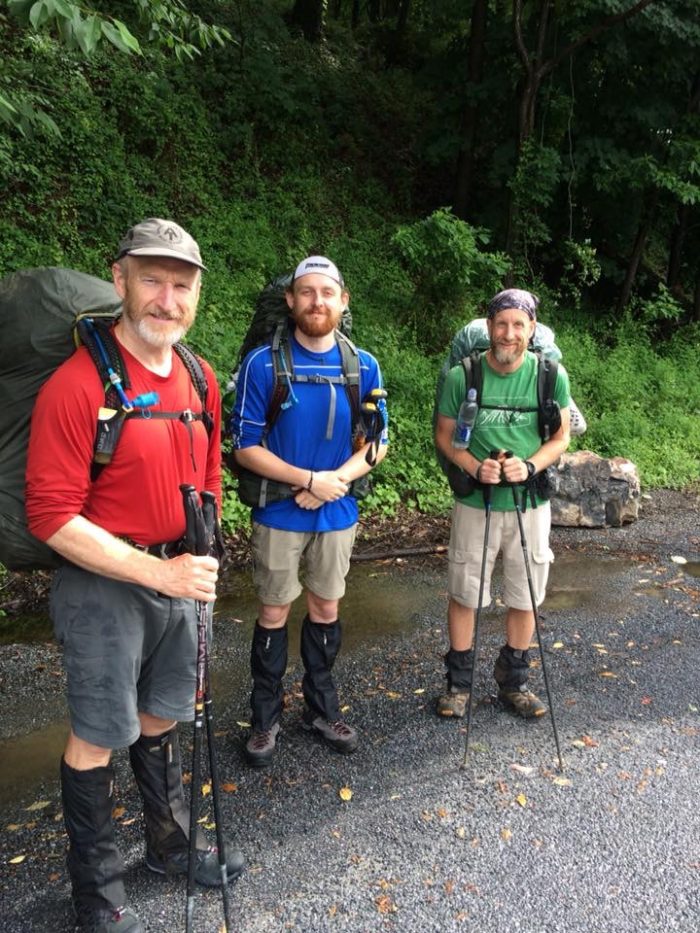