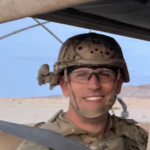 Let Me Introduce Myself

I was going to make my second post about route planning, but I’m calling an audible (Omaha, Omaha!) and switching it up.

My name is Stephen (Pronounced “Stev-en”; I get called “Steph-en” on the daily though) and I’m attempting the AT thru hike (NOBO) starting 16 February. This is my first thru hike so I don’t have a cool trail name yet. I wanted to make this intro a little more personable and fun since you can find generalized info about someone through LinkedIn, Google, etc. So here we go!

These are a Few of My Favorite Things

Other than deployments and walking around with body armor, weapons, ammunition, water, and sometimes a small pack with supplies; not much. I would say I’m definitely more of a hiker than a runner though. I’m getting in as many hikes as I can before my start date. If anyone has good ideas on shakedown hikes, please let me know!

That pretty much sums it up. I’m excited to meet others out on the trail! The next post will be about the route planning I’ve done thus far (no audible on the next one). Thanks for following along!

If you’re lost, follow me! My name is Stephen and I’m retired US Army after 23+ years of service. Starting my AT Thru-hike (NOBO) 16 February 23. I decided to complete this journey for three reasons: 1. It’s a bucket list and a once in a lifetime opportunity, 2. I’m looking for some reflection of my career and past experiences, 3. I have the opportunity to take a “gap” year and discover what I want to do for my next career amid my transition from Soldier to civilian. I prefer my steak rare, bourbon with orange bitters, and my inner nerd loves documentaries/history. I’m an avid skier and cyclist who has completed a few triathlons. Looking forward to this challenge and meeting fellow outdoor enthusiasts along the way. I can’t wait to receive a trail name!