Hikers and Campfires and Trail Celebrities, Oh My!

Words can’t even describe how amazing this past weekend was! Reminiscent of Trail Days but on a much smaller scale (and with less-smelly hikers), the Appalachian Trail Kick-Off Party (ATKO) was a whirlwind of hiker related activities, gear vendors, hikers, trail celebrities, guest speakers, the works!

Upon arriving in Dahlonega en route to Amicalola, we of course had to stop for a beer run at the local Wally World. Jacob and I filled the cooler and grabbed a few shareables to distribute to the thru-hikers who would be leaving for the trail over the weekend. Heading up to the park, I was delighted to be back in the mountains after spending a few weeks in flat country down in south Georgia. We arrived at the park and checked in at the visitors center, where I got my first AT passport stamp!! I think this whole passport thing is pretty cool, and ended up racking up several stamps before the weekend was over. 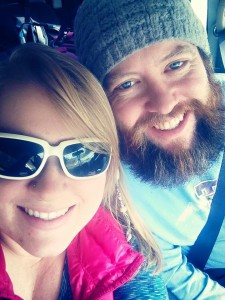 All smiles en route to ATKO!

We were directed to Tent City (AHHH I could not wait to be sleeping in a place known as tent city for the first time since Trail Days last year) where we set up my tent and Jacob’s hammock so we wouldn’t have to set up in the dark later. It was going to get down to about 26 degrees that night, and I had been itching to try out my new BA Q-Core sleeping pad. After getting camp set up we went for a very short walk up to Amicalola falls, my first time seeing them, and man are they a sight to see! The steps are a bit daunting, but I would say to any aspiring hikers that the Approach Trail is worth doing just to get to see the falls. 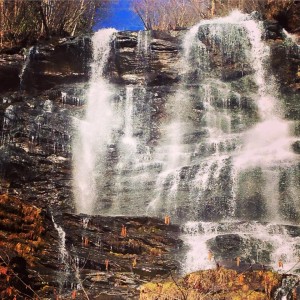 No photo I took does justice to the beauty of Amicalola Falls. I can’t believe it took me 26 years to see this place!

Dinner and drinks at the lodge restaurant followed our short walk, and we hung out in the lodge until the opening session later that night. Right about sunset a ton of folks gathered round, as the balcony of the lodge faces directly into the setting sun. It was a sight to behold, watching the sun dip behind the mountains. We met several cool folks and aspiring and past thru-hikers milling about, and even caught a glimpse of the legendary Gene Espy!

We sat through the opening session and then on to the highlight of the night: backpack shakedowns by several well-known and respected trail folk. Sir-Packs-A-Lot ended up doing my shakedown and I had a mighty proud moment when the ONLY things he told me to get rid of were my Chacos (not going to happen, at least not until I physically tire of lugging them up and down mountains) and my two extra fuel canisters. He assured me that one would last me 5-7 days and I really didn’t need to carry three. He also introduced me to this remarkable idea of actually USING a couple of the loops on the outside of my pack to free up some space inside. I guess I had gotten so caught up with all of the “you don’t want things dangling all on the outside of your pack” thing that I had neglected to put anything on the outside. Simply moving one item from the interior to the outside freed up loads of space. I suddenly went from thinking my pack was too small to having more than enough space. So aspiring thru-hikers, take note: you shouldn’t have a gazillion things on the outside of your pack, but a few strategically placed items can make a ton of difference. 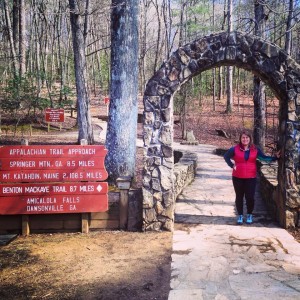 Obligatory under the arch photo!

Of course, what’s a hiker party without a hiker after-party? On the way out of the lodge that evening we ran into Sara, who was camped down at tent city but didn’t have her car due to the fact that she was leaving for her thru-hike on Sunday! We gave her a ride back down to camp and lo and behold, when we arrived, a campfire was already blazing. We immediately pulled out the cooler and joined the small crew already gathered around the flame. This is always my favorite part of hiker gatherings. We sat around and talked, exchanged trail names and stories and reasons for hiking the trail. I was introduced to Seven, who makes thru-hike documentaries (you can find him on YouTube), Mountain Man, and several others who I can’t recall at the moment. Later, a crew joined us that had come in on a shuttle. Laugh Tracks, Goosebumps, and two others who had thru-hiked the PCT last year and were starting their AT thru-hike on Sunday gathered around to inspire us all with their tales of the PCT. Surprisingly enough, they all expected the AT to be a harder hike. I guess we will see!

Oh. My. Gosh. Friday night was the BEST and MOST COMFORTABLE night I have EVER spent on the ground. My REI Joule bag and BA Q-Core pad kept me warm and toasty even though temps dipped down to the mid-low 20s and there was frost on the tent when we woke. I am now confident that I can sleep warmly on the trail, and this has been something that has worried me to no extent, as I’ve spent more than a couple of uncomfortable, cold nights out there during my shakedowns.

Breakfast at the lodge is followed by scouting the gear vendors. I was very intrigued and on the verge of purchasing a Lightheart Gear tent…. it’s so light and roomy! And I can’t say I’m in love with my BA Seedhouse… for some reason it takes WAY too many stakes to stake out. And can be hard to maneuver in. But, it will work, and no need to spend money I don’t have anyway. I also had the opportunity to meet Skywalker (oh, hello Skywalker’s belly button, nice to meet you!) and AWOL. Super cool trail folks. It’s just so amazing to me to see the tight-knit community surrounding this trail come to life. 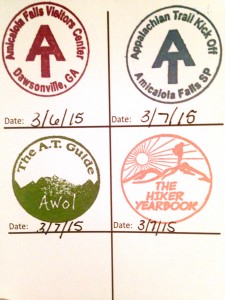 I racked up on AT Passport stamps!

The last session I attended was Gene Espy’s talk about his hike and a run-through of the gear that took him from Georgia to Maine waaaaaaay back on his thru-hike. Man, how times have changed. It was captivating to hear him speak in his unintentionally comedic southern drawl and hear his story come to life through his words. Truly a remarkable figure of the trail and I’m glad I had the opportunity to meet him in person.

Jacob and I decided to skip out on a few of the sessions and head back into Dahlonega for dinner, where I had the BEST crab bisque, mussels, and oysters that I think I’ve ever had. Washed down with a wine tasting, and it was back to tent city for us and onto a night of mingling with the other hikers. I can’t stress enough how cool it felt to be a part of the thru-hiker culture, even just for the weekend. We roasted smores, sang, drank, someone played a ukelele. It was truly magical.

During the day I had set up my hammock in preparation for the coming night. Temps were expected to be in the mid to low 30s, the coldest I have ever attempted to hammock (and both other times it was below 40 and I froze to death). I was worried, but I’m pretty sure I fell asleep almost before I finished zipping my sleeping bag, and didn’t move until almost 8am the next morning. Moral of the story: With a properly adjusted and rated underquilt, and a good topquilt or bag, you CAN stay warm in a hammock (alcohol may or may not have been of assistance).

Tent city in all her glory! You can’t really see the hammocks in the back, but they are there.

We decided not to even go to the lodge Sunday morning. We met the super cool folks from Hiker Yearbook the previous evening, and they were making coffee and hot cocoa the next morning. Jacob and I both decided that we were learning more and having a more meaningful experience by hanging out with the hikers down at tent city than by going up to the lodge. We packed up camp and helped to send a few thru-hikers off on their incredible adventures. Laugh Tracks and Sara (no trail name yet) both left within moments of each other, and despite having just met them, I was on the verge of crying tears of joy (mingled with tears of jealousy) as they walked away. Happy trails, ladies, until we meet again! 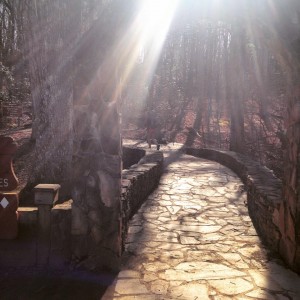 Sending Laugh Tracks off on this gorgeous day made me sooooo happy but at the same time made me long even more for my own start date to hurry up and get here!

Now, one of my personal highlights from the weekend was putting my nearly fully loaded pack onto the scale at the visitors center. The only things missing from it at this point were a couple of small items (like soap, maybe a sewing kits, things like that). It contained 4ish days worth of food (maybe more but definitely not less) and a liter of water and weighed in at…. wait for it… 26 POUNDS! What!? I was sure it was going to be over 30lb. And that weight even includes the ridiculously heavy Chacos.

My thoughts about ATKO:

And, that’s all for now. Next post is likely going to come after my 6 day hike from Springer to Unicoi in a couple of weeks!! Can’t wait to be out there!