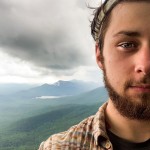 I remember waking up at dawn in the Blood Mountain Cabins and breathing in those last few euphoric breaths of climate-controlled air.  To be able to sit in a bed and contemplate my experiences on trail without concern of the sky opening up and washing me into oblivion was such a relief.  My cabin mates and I enjoyed coffee and leftover quinoa for breakfast and prepared ourselves for a few more days of rain and wind, all the while cutting-up about the absurdity that was climbing over Blood Mountain in a rainstorm.

Rocksteady and I made our way back to Neel Gap, passed under the ominous quitter’s tree, and began climbing once again.  The motto was hell or high water, though we were certain it would just be the latter. 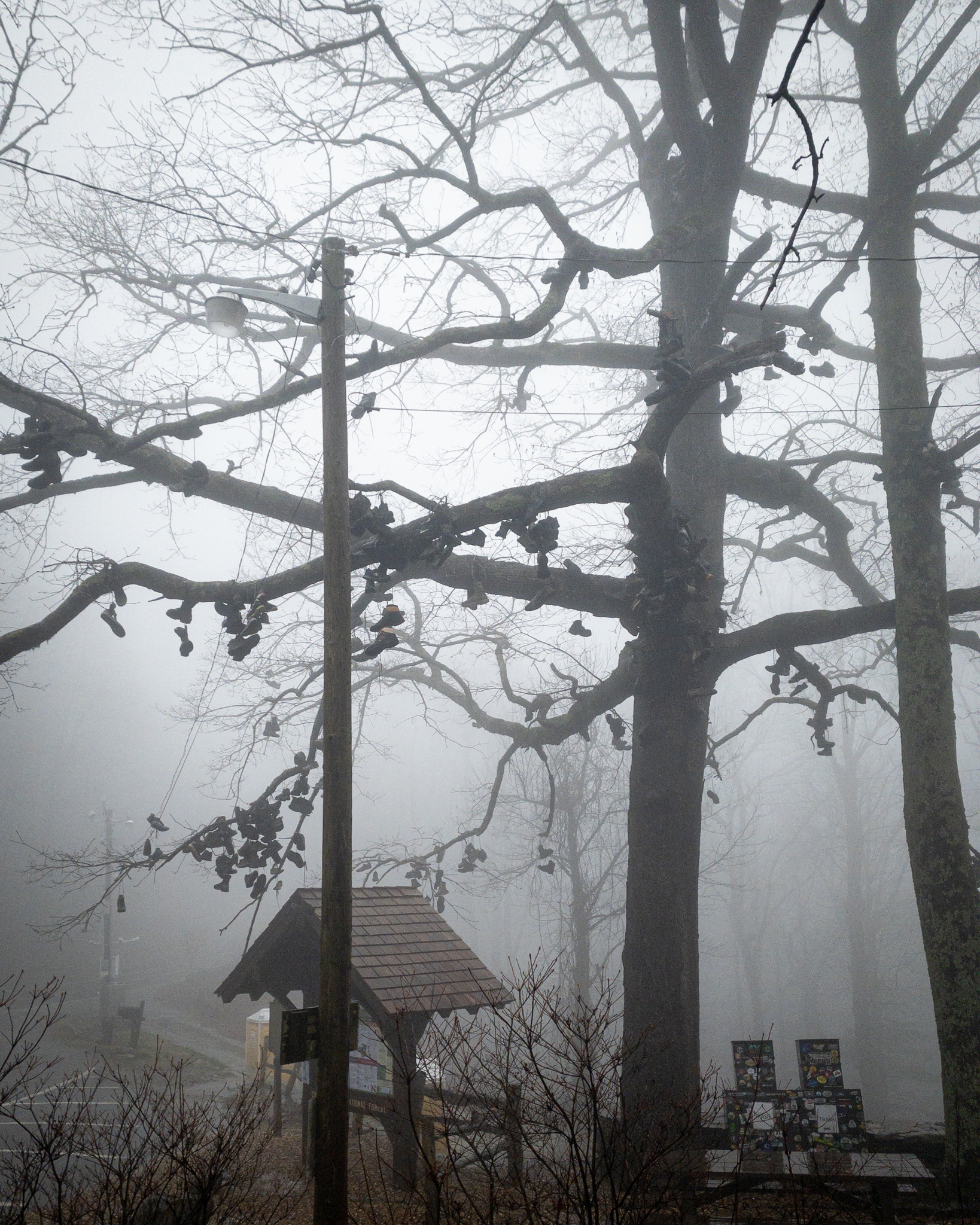 We were headed towards Low Gap Shelter, and that meant walking the ridgeline, our first day of ridgeline.  In past experiences on trails, ridgeline days often meant scenic views and moments of deep reflection and appreciation, but the fog commanded otherwise.  The miles seem to roll endlessly through thickened clouds and rivers pouring forth from the heavens.  Just to tease us the wind would cut through the mountaintops, carrying away both the clouds and a piece of our very being with it and allowing us a glance at the beauty that is the Appalachian Mountains, but it would shortly thereafter smother us with a fresh wave of wispy soldiers.

In contrast to a wet day, we had a clear, sunny evening.  The whole party appreciated the relief.  This is where I would meet my newest hiking companion—John Mayer.

At the time I only knew him as Matt, but after a few days of traveling together we both found a common interest in music.  The irony of belting John Mayer’s Gravity as we climbed mountains at 5 a.m. definitely demanded some sort of recognition, and it came in due time. 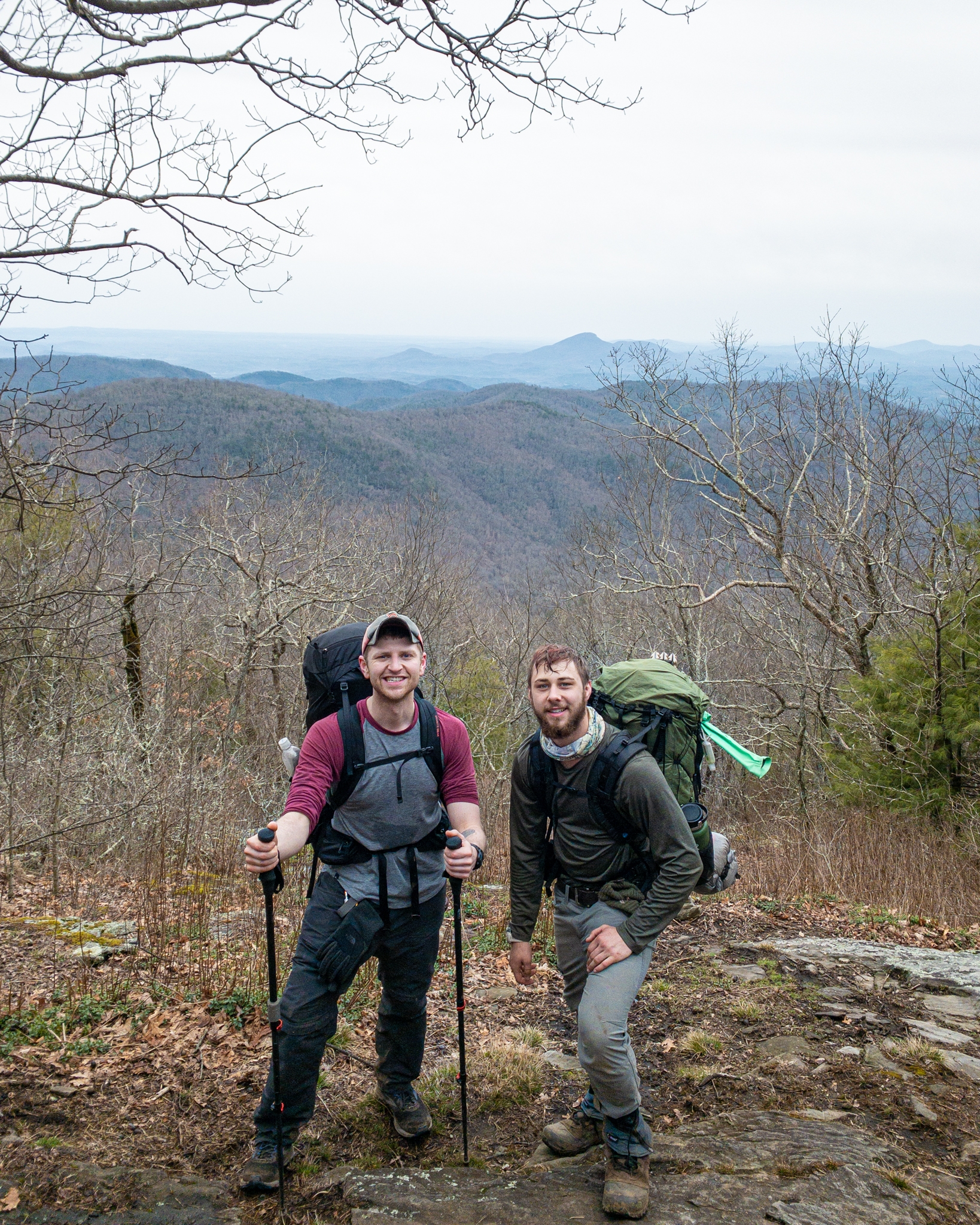 We left the original party behind in hopes of catching up with Poprocks, a thru-hiker who had finished the AT in 2019 and was sectioning Georgia once again with one of his old companions.  We had heard that Poprocks was doing trail magic at Dicks Creek Gap, but more pertinently we had devised a plan to cram as many people as we could into the back of his Tahoe and split a hotel room together.

The chemistry between my new acquaintance and me was evident.  We shared the same dorky humor, the same love for music, and the same desire to push ourselves on the trail.  Predawn treks up the mountain became our usual, and we were just as steadfast as the rain that kept pouring down on us.  We made our final descent down to Dicks Creek, swapping melodies and harmonies for Rosie and various sailor shanties when we stumbled upon a bear.  Granted, it was a dead bear, but a bear on trail is still a sight to see so early in the game.  The poor adolescent creature was lying against a log not ten feet off-trail, and we alerted one of the ridgerunners (thanks Cpt. Planet) as soon as we could. 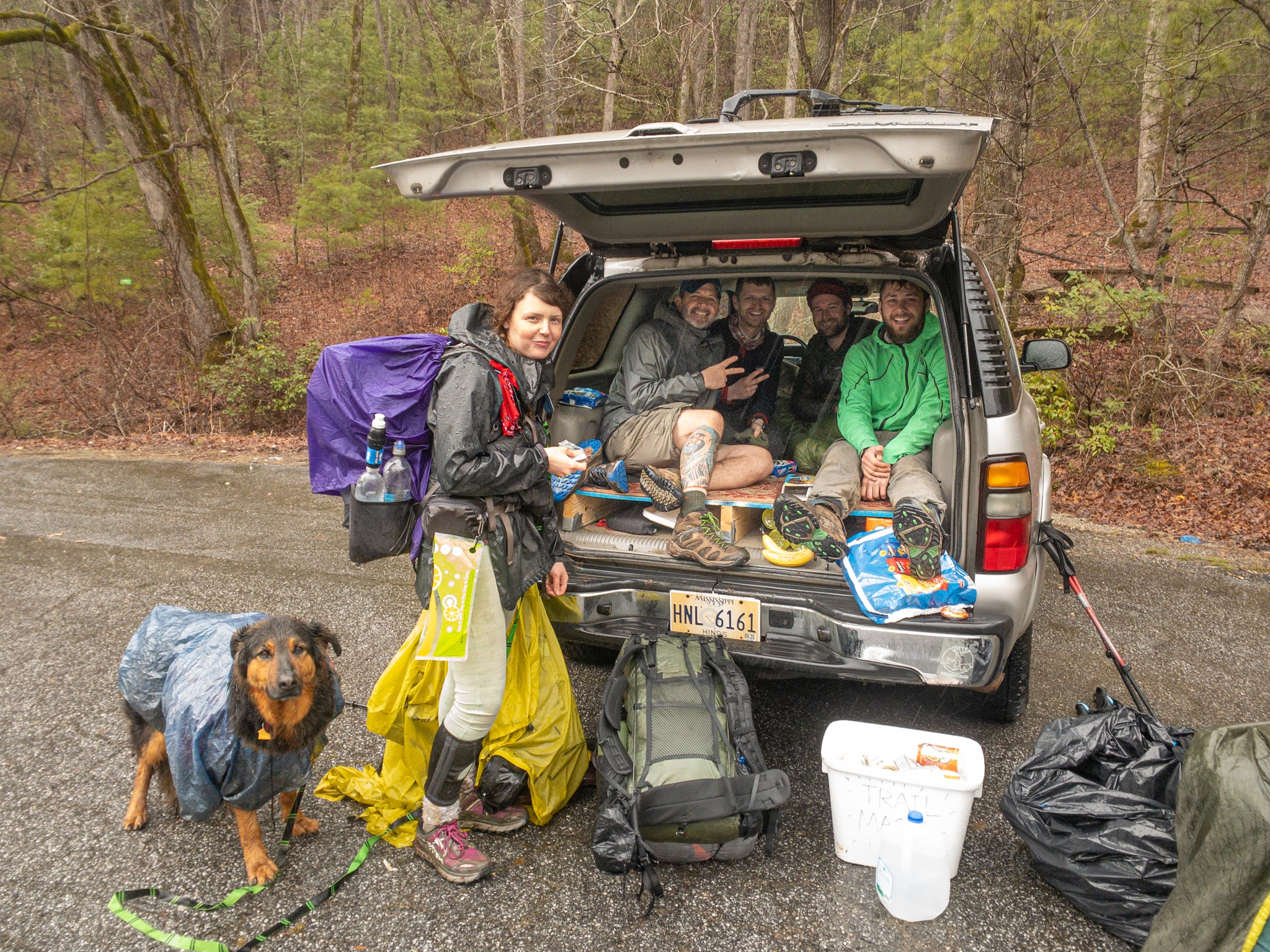 It’s so funny to call home and tell my parents that I climbed mountains in the rain with someone whom I’d just met just so we could hop in the back of a total stranger’s car and split a hotel room between five people.  The reactions of sheer confusion when one writes a loved one “my boy Poprocks the trail angel was doing trail magic,” such went the conversation with Matt and his partner, brings me to tears every time.

We all took turns washing ourselves and doing laundry at the hotel, and amid my elated haze of a hard-earned rest came Matt belting Rosie as he strolled out of the shower, and in that moment I bestowed the name “Mayer” upon my companion.  He accepted the proposed trail name with delight and more laughter, and the week has been one continuous concert ever since.  People are illuminated with joy every time he introduces himself, and the positivity that’s constantly emitting from him further justifies our decision in granting him that title.

Getting Back to NC and Shivering the Nights Away

The morning after leaving the hotel was punctuated with fond farewells to our new friend Poprocks as he went home to start a new job, and we marched all morning to reach the North Carolina border.  Atop the very first climb in North Carolina was a spectacular ridgeline view of Whiteside Moutain, an iconic squared gem with massively exposed rock faces.  I could see home, or I was home already.  It’s hard to say on foot when you’ve finally “made it” back to where you came from since the time it would take to reach my physical house by walking was still days, but my heart was filled with joy nonetheless. 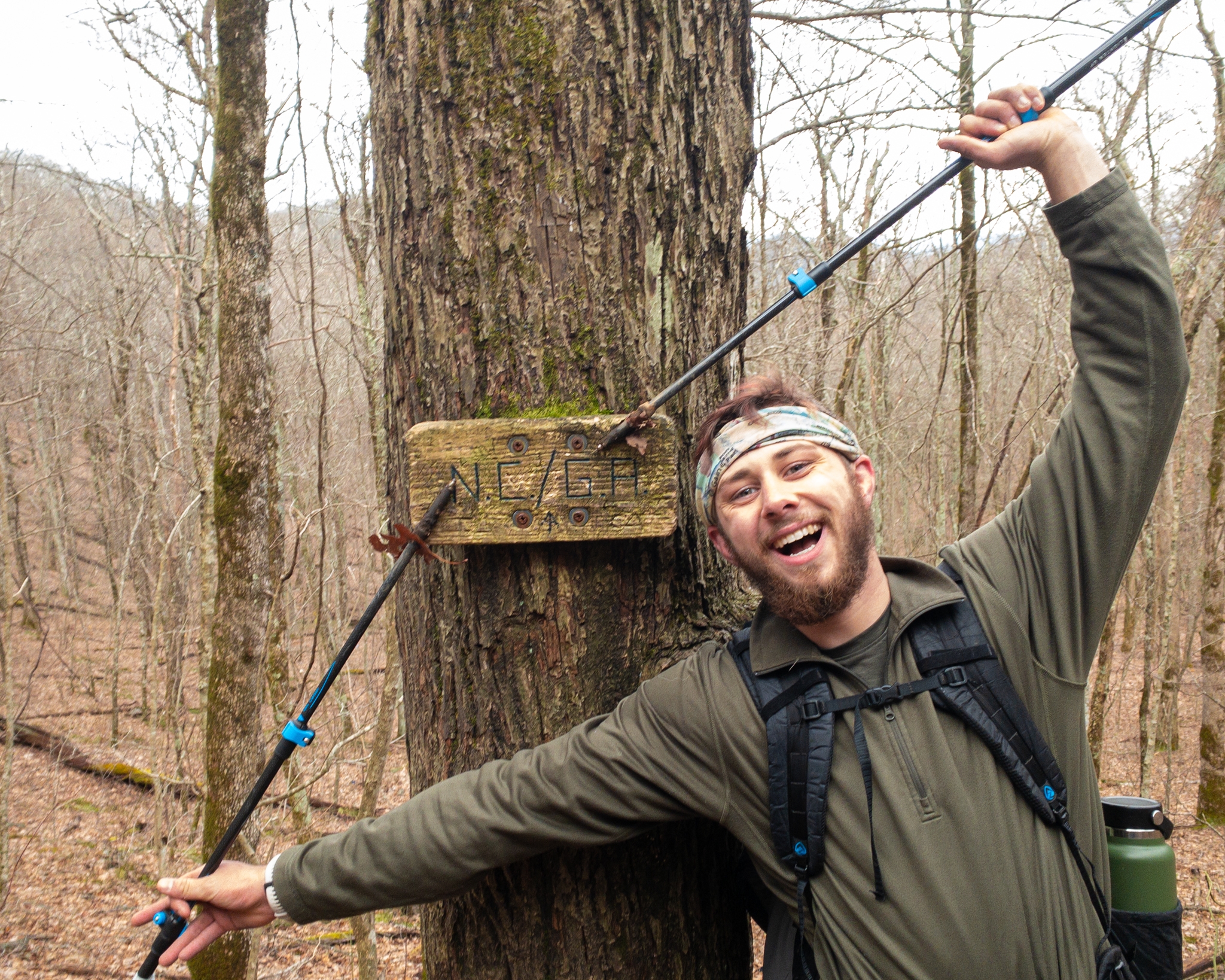 That first night was cold—miserably cold.  Including wind chill, the temperatures on top of Standing Indian Mountain dropped to a frigid one-degree-Fahrenheit.  The sleeping cocoon I had created did enough to sustain me for the night, but I didn’t manage to sleep at all.  I remember running through Nirvana’s MTV Unplugged set in my mind as I waited on sleep to take me.  It never did, unfortunately, but I did get to listen to Kurt Kobain sing “In the pines // In the pines // Where the sun don’t ever shine, // I’d shiver the whole night through” just shy of a thousand times, so that was neat. 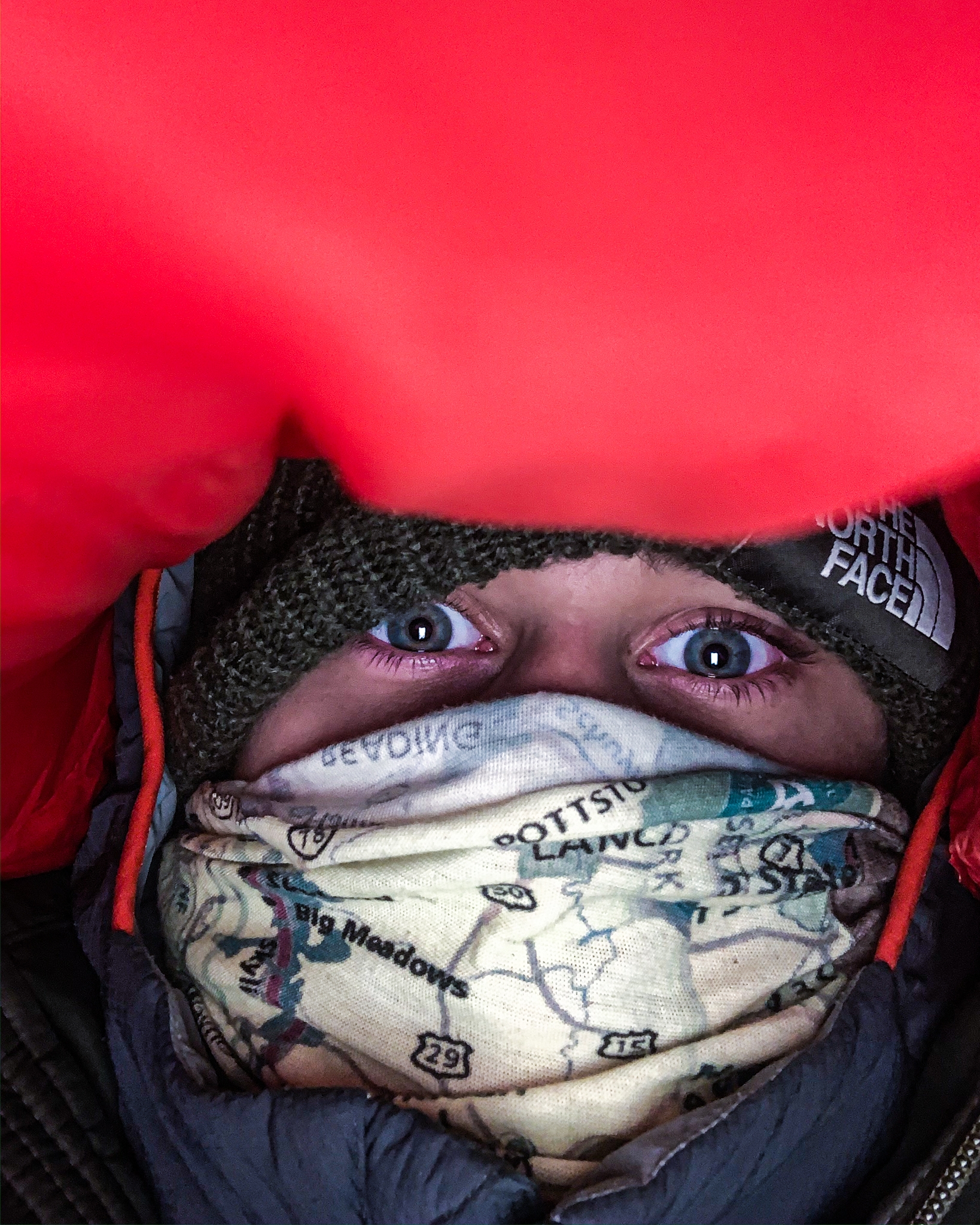 Dawn eventually came, as it always does.  We were slow moving but ultimately ready to tackle another day.  I shook the frost from my boots, slapping them against the wall to bring back some of the flexibility in the stiff material, laced them up as I had hundreds of times before, and sipped coffee with Mayer before seizing the day.  All felt good for the first couple hours, but it quickly became evident that the cold had made its way into my very being.  The sleepless night weighed on me, and I felt this both in my character and performance that day.  My voice was raspy and it hurt to breathe as Mayer and I paced up and back down mountains all day.  I was quickly reminded of the quality of people who are found along the AT.  While he did not slow down for me, my companion was a catalytic vessel of encouragement and reassurance, especially when I needed it most.

One hundred miles isn’t much in terms of the entire AT, but it was a big accomplishment in my first week on trail.  Breaking the hike into approximately 22 weeks makes everything seem more feasible and realistic in the long run, and so with the exception of scheduled breaks to see family and enjoy the festivities of Trail Days (this’ll be my first one, let’s get it), we’ll be approaching the AT with a 100-mile-per-week routine. 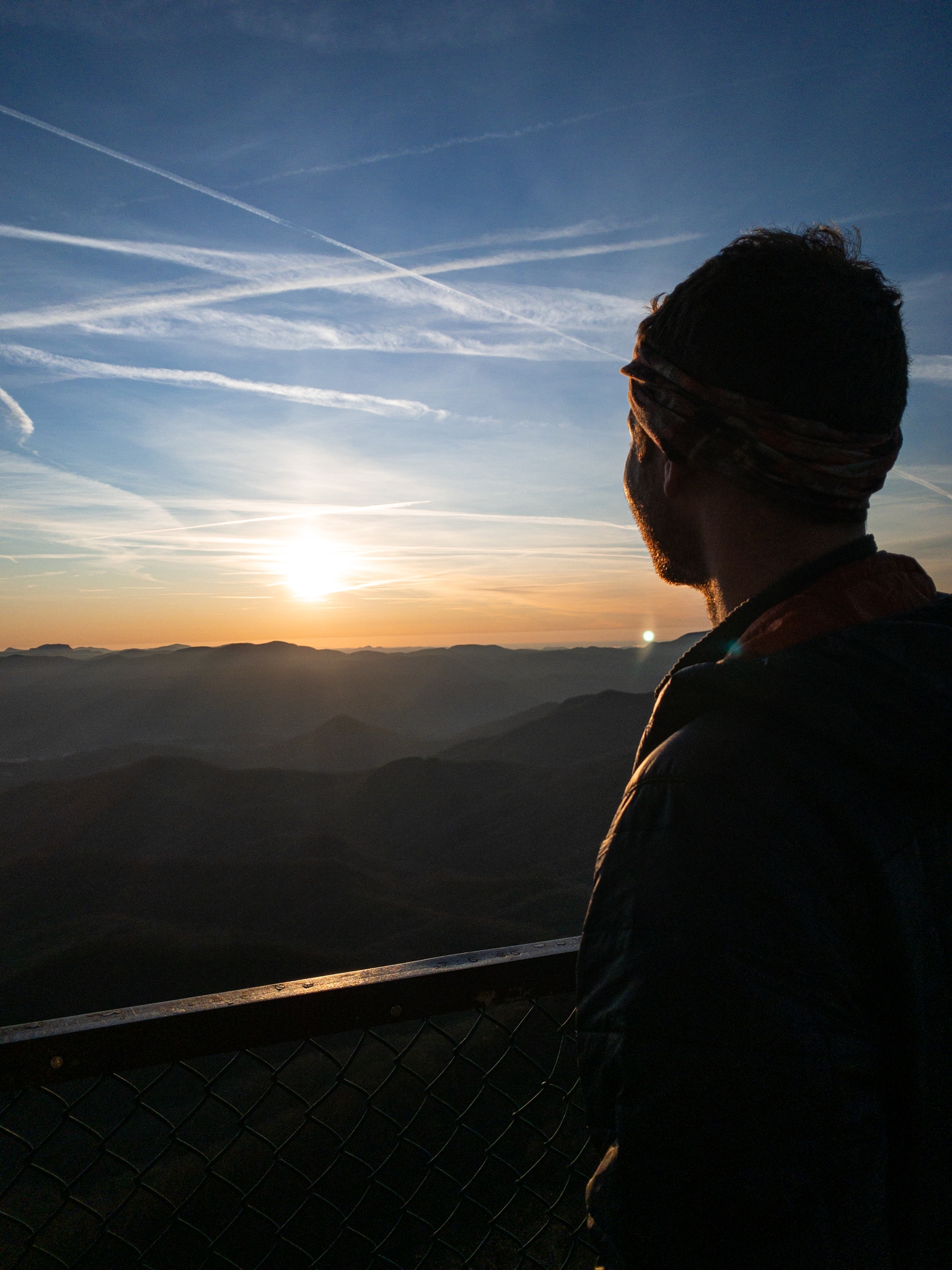 Speaking of visiting family, Mayer and I took our first zero back home at my parents’ place.  Amid real cooked food and soft mattresses we were reminded of the trials that came with such a wet, cold start to our journey.  Other classes have certainly had it harder than ours, but it seems we have discovered a new sense of appreciation for the trail through its challenges.  When the temp gets so low that sleeping with your water filter is a requirement, you aren’t always amped up to crush a 16-mile day.  These things take constant effort, a constant pointedness toward our goals, and enough discipline to get moving despite the intense discomfort.

I look back on this first week fondly as my perspective on my life before has already shifted so greatly.  I can enjoy the luxuries of a tasty cup of coffee and sit in front of my computer screen typing about the absurdity of this whole endeavor, but the fact of the matter is these situations are hardening us, shaping us into more resilient versions of ourselves.  While the me a few weeks back could definitely put in the miles, the current me has traversed the subtleties of staying in that zone, enduring those elements, and it has only been a week.  Mayer and I feel nothing but confidence as spring slowly approaches, and we look forward to the trials of the trail to come.