Kaiha “Wild Card Ninja” Bertollini was at a crossroads in her life when the Appalachian Trail found her in January 2016. After a chance encounter with a friend of a friend who was just finishing his SOBO hike, Bertollini decided to get on the trail herself. She quit her job, entrusted her mother with her dog, packed up her possessions and on January 4th 2016, hiked the last 630 miles with a stranger who would become a good friend. Now she’s southbounding on her yo-yo hike.

On September 19th, 2016 she plans to finish her thru-hike, just 46 days from her start date.  The AT’s self-supported Fastest Known Time currently belongs to Heather “Anish” Anderson who hiked it in 54 days, 7 hours, and 48 minutes.  The supported FKT currently belongs to Scott Jurek with a time of 46 days, 8 hours, and 7 minutes.  Because of the spontaneity of this hike, Bertollini is not carrying a GPS tracking device, and thus is not in strict compliance with FKT guidelines.

In 2010, Bertollini was sexually assaulted by multiple men in her unit while serving in the military. She was discharged due to the PTSD she had developed as a result of the attack and what followed was a period of intense disconnection and grief. After meeting another survivor and seeing how important it was to share their stories of pain and hope, Bertollini’s life changed. “Just maybe I could keep it from happening to anyone else… I was able to empower myself through being there for others like me. I started to tell my truth and took back my life.” 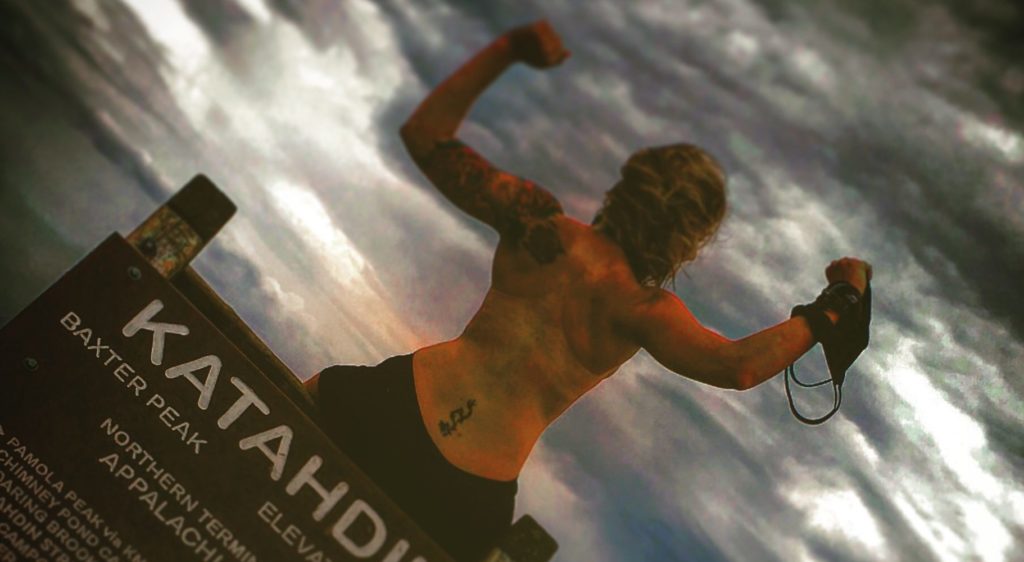 Bertollini created the site, Hike For Our Lives, with which shares her mission, features video updates from her hike, serves as a place for supporters to donate and an offers a space for other survivors to share their stories. Here she writes:

“The events of that night forever changed the way I connect with the world around me. However, with time, the events from that night also lead me down a path of self-empowerment, self-love, and self-respect that no one will ever be able to take from me again. Although, some things will never be the same, I am no longer afraid to speak out against sexual assault and oppression of any kind.”

Jenny “Meatballs” Carrington met Bertollini at PermaJam, a festival that her own non-profit organization, Freedom2Fit partners with. Carrington is a sexual assault survivor and activist herself. Like Bertollini, she is using her past and physical expression as a way to heal, connect and empower others. Carrington says that, “We are looking for anyone and everyone who is passionate about this cause to join the conversation, share their stories of molestation, harassment, sexual assault, and rape, sign the petition, or become a funder.” One of her larger goals being to:

“Create an application process for Freedom2Fit, Inc. to sponsor at least one female and one male per year (particularly that have been victims of sexual assault) with full funding to hike the Appalachian Trail as a part of an ongoing Hike for Our Lives project.” 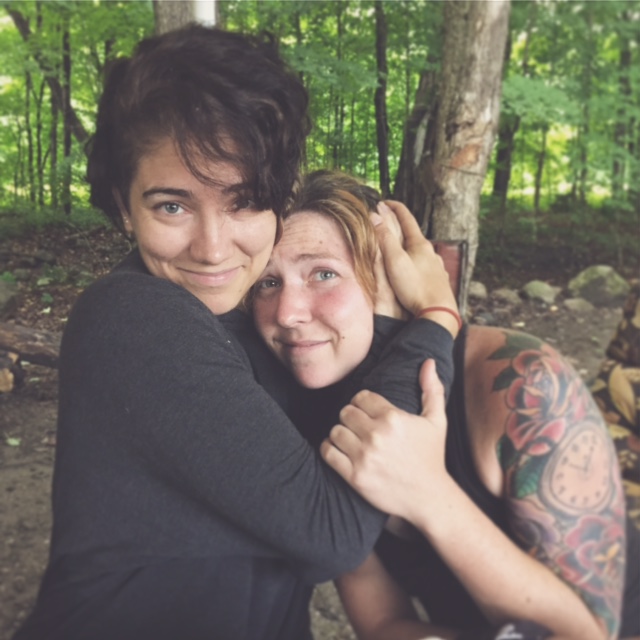 The physical aspect of Bertollini’s hike is daunting. She hikes 36 to 53 miles a day stating that, “The only way to get used to walking 40 plus miles, is to walk 40 plus miles. I’m not fast, just, walk all day and night.” Her base weight without food is ~8lbs. The contents of her pack, which is a Gorilla 40L, include:

Much of Bertollini’s gear has been given to her on the trail during her NOBO hike. She has also received generous donations from Hoka One One, ZPacks, and Classlink.

“It matters not if I break the record or not, nothing happens if I don’t try and I choose try.”

The Trail community is renowned for its unparalleled support and welcoming attitude. Bertollini says her message has been well received by those she’s met. “Of course, there has been some who doubt, or don’t understand why I would put my body through this. I knew once I started hiking and showed them, then no one would be able to ignore my project and what I was trying to accomplish for myself and for others. And the encouragement and emotional support flooded in. The support of the trail community has made all the difference in my hike and builds the strength in my heart to keep going.” 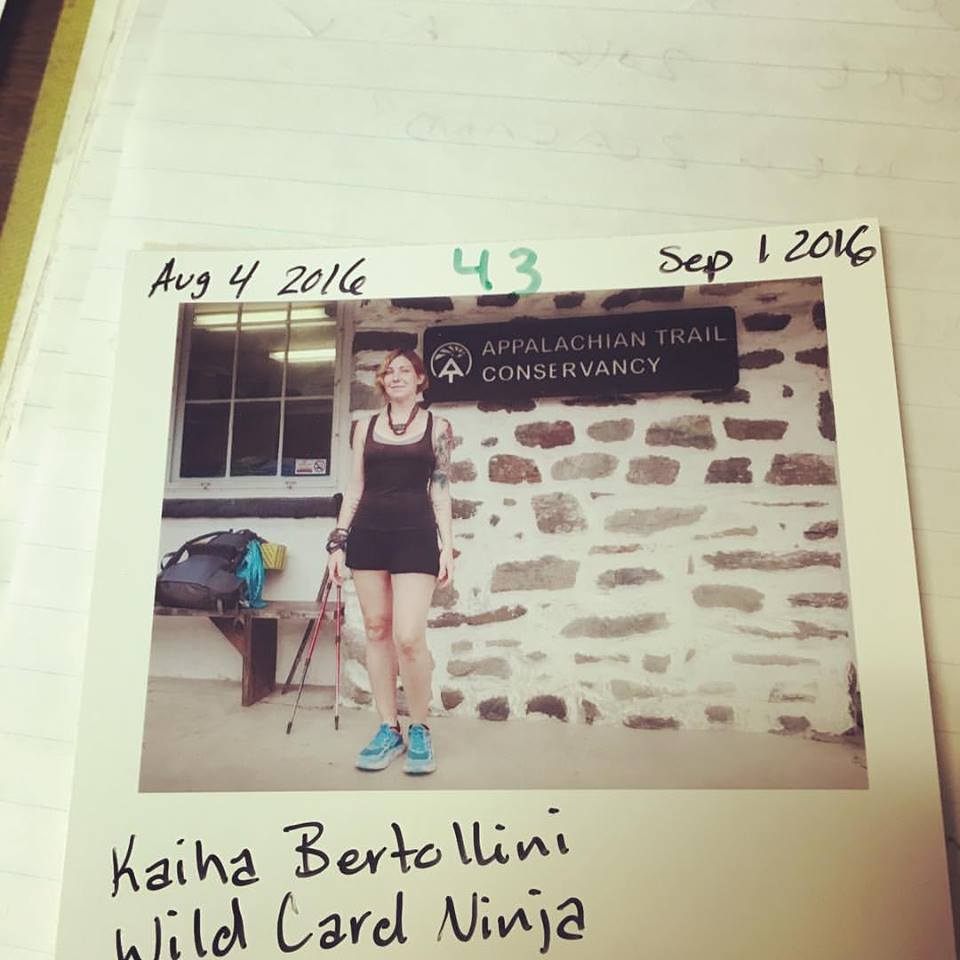 Like any thru hike, there are challenges however. “I experience so many highs and lows in one day with my miles doubled. There is no trail family to lift my spirits or make fun of me. No one to embrace or talk to at the end of the day. No pat on the back for another day completed. I have to encourage and motivate myself to take another step and most days, I still struggle to believe I am really making a difference.” Her PTSD has also been a challenge.

“PTSD never fully goes away. When I first started walking it was nonexistent. Then as I began my speed hike I am becoming more aware of it and what triggers my episodes. The beautiful fact for me today is, I see and feel when it’s happening and can pause before I act. That is such a gift for someone like me and I give all credit to hiking the AT. Mentally I am more at ease with every step.”

Her spirits are also renewed whenever another victim of trauma connects with her. “What I am doing is bigger than me and my individual goal of smashing the self-supported record in 49 days. I’m trying to change the world with my story in a big way by giving back to my community and my brothers and sister in humanity that have impacted my life for the better. There is only one choice, to keep walking, running and sometimes crawling until it’s done.”

“The relationship between hiking and healing is complex and never ending it seems most days. I thought I had dealt with my attack but really I had pushed it down and put bandaids on a wound that will never fully heal. Hiking made me face that. Some things won’t ever be the same but that’s okay. I don’t have to run from it….Hiking breaks you, and then it rebuilds you over and over and with each time it has made me stronger of heart, mind and body.”

As Bertollini approaches her deadline, she says there’s one thing she wants trauma survivors and hikers to know:

“Sometimes we have to start broken, but in the end you have a choice and if they can find even the smallest thing to hold on to, it will lead them out of the dark, into the light of a life they love, and is worth fighting for.”

We’re hiking in solidarity with you, Wild Card Ninja!  Follow her journey here.