Last night, we arrived at Gooch shelter fairly late and all the good tent spots had been snapped up. We settled for (what we thought was) a slightly slanted piece of real estate. It ended up feeling like sleeping in a tall water slide at an amusement park. We both woke up every few hours to drag our sleeping pads out from the right corner of the tent. However, we had a much warmer night. We made sure to layer up just in case but we stayed toasty warm all night, despite gravity dragging us down.

Last night, we also met some other cool hikers, including Sam and Laser Snake, who hiked with us some today. It was foggy when we started hiking today, but luckily the fog cleared enough for us to get a gorgeous view atop Big Cedar Mountain. 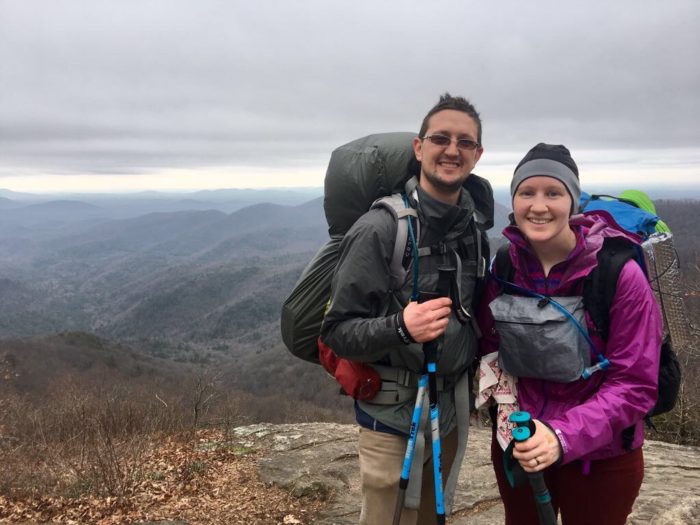 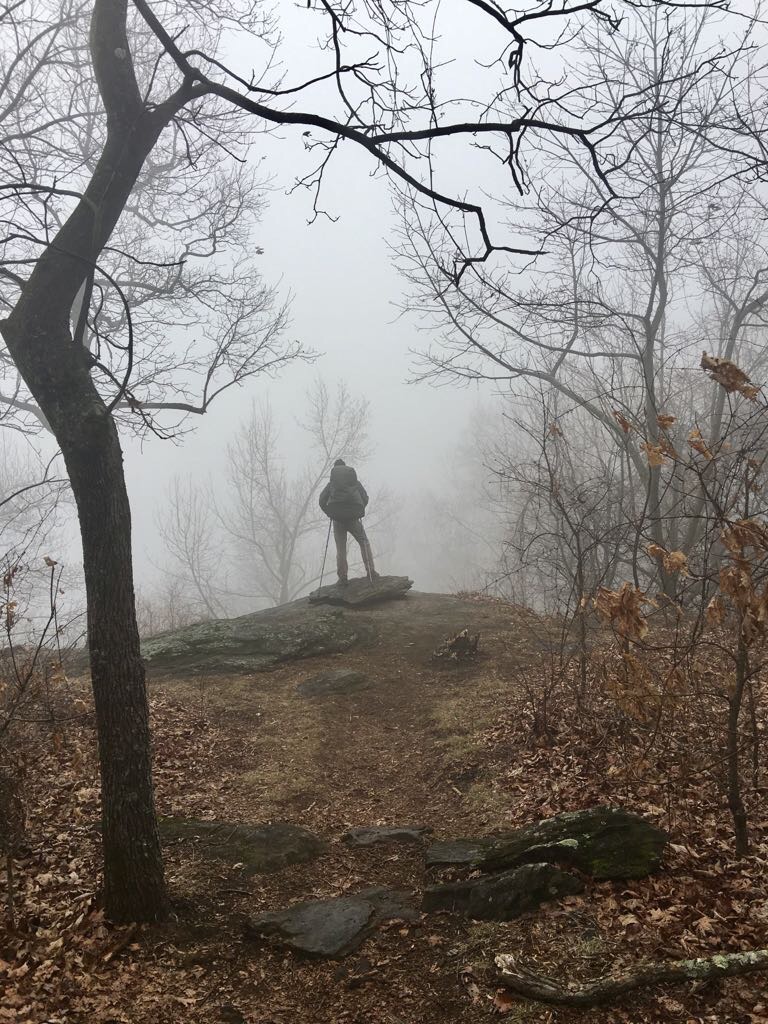 Louis in the fog

We hiked down to Woody Gap with Sam and Laser Snake where we found our first trail magic! Beer and Mountain Dew. We stopped for a quick lunch before hiking on. 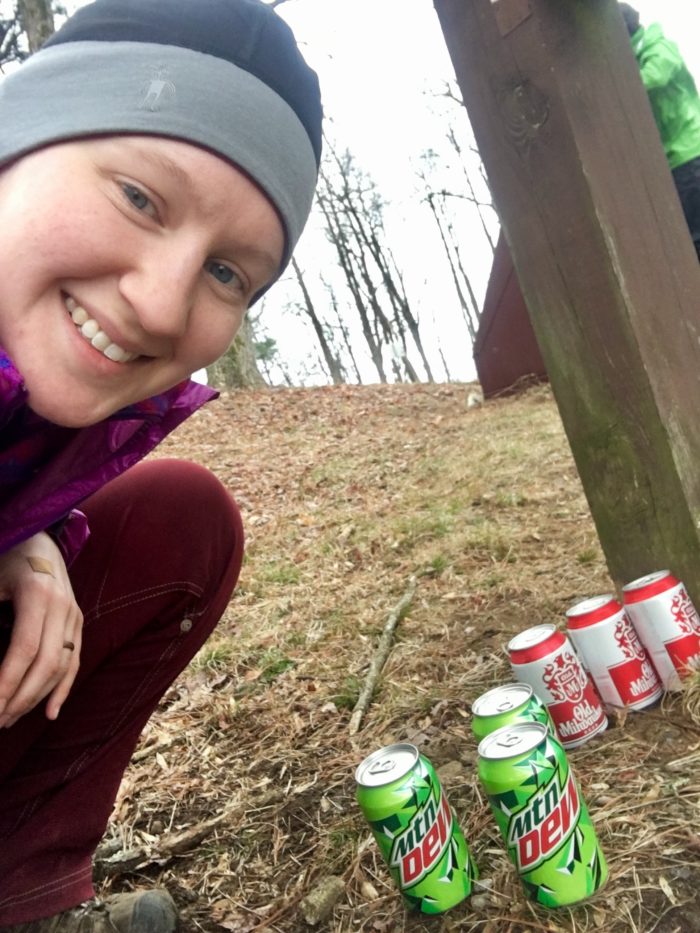 Louis and I stopped to do foot care, and Sam and Laser Snake continued on. In my trail research, I read that foot care is top priority, and getting to hot spots before they become blisters saves you a lot of trouble. I took it to heart, and stop every time I felt a spot rubbing to tape it. 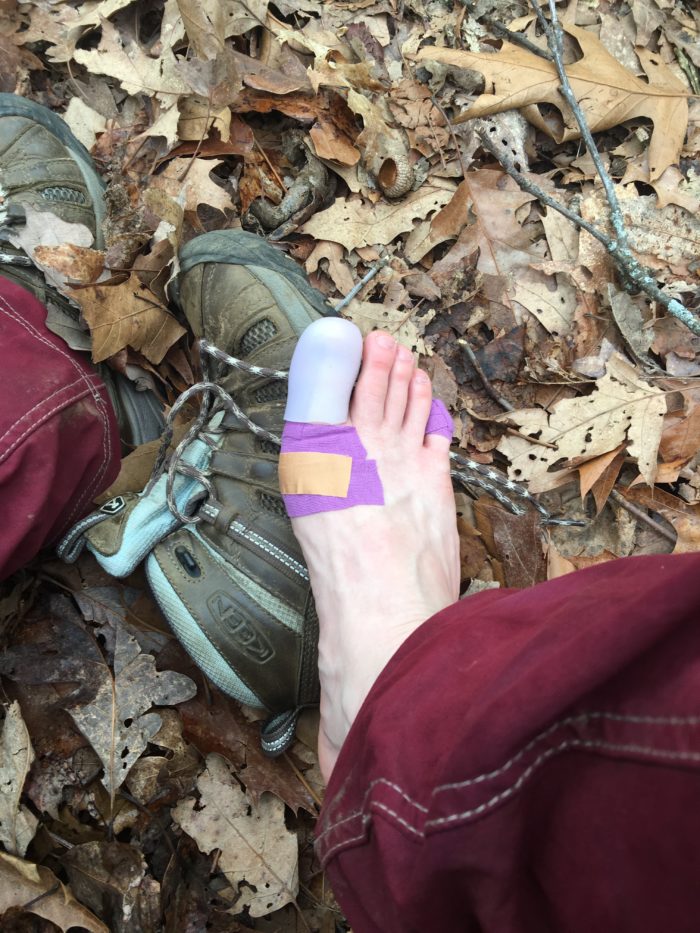 We decided to try and get to Woods Hole shelter, and if we were feeling ok, maybe push onto Blood Mountain shelter. However, the weather had other plans in store for us. Around 1 pm the skies turned dark, and I checked my watch to make sure the sun wasn’t setting. Nope, they were storm clouds rolling in. It started raining heavily when we were just a few miles from Woods Hole, and we decided to try and push through the rain to the shelter. By the time we got to the blue blaze sign, we realized the shelter was 0.4 miles off the trail (an eternity when you’re caught in a thunderstorm). Lightening was striking all around us. The pounding of thunder sounded like it was sent from the heavens directed personally at me, and was so deafening it made me grab the nearest tree for comfort. 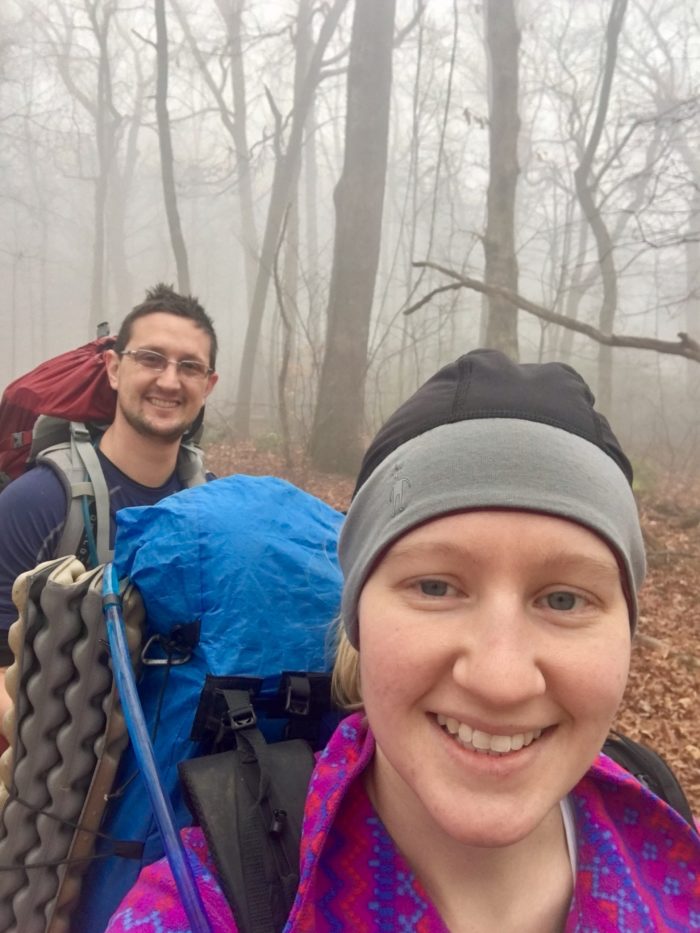 Hiking through the rain is always more fun with a buddy

We made the decision to try and push on 0.3 miles to the next campsite rather than go 0.4 miles off trail to the shelter, which ended up being a brilliant decision, because less than 0.1 miles past the blue blaze sign was a small campsite off the trail. It was a sight for sore eyes. We could have broken records with how fast we set our tent up (impressive considering this was only our 3rd time pitching it). Before the trail I wondered how people set up tents in the pouring rain, and now I know how: quickly! We huddled inside, blew up the air mattress, and changed out of our wet clothes and into dry ones. Feeling the echo of the downpour on the walls of the tent was glorious since we were dry and cozy inside. 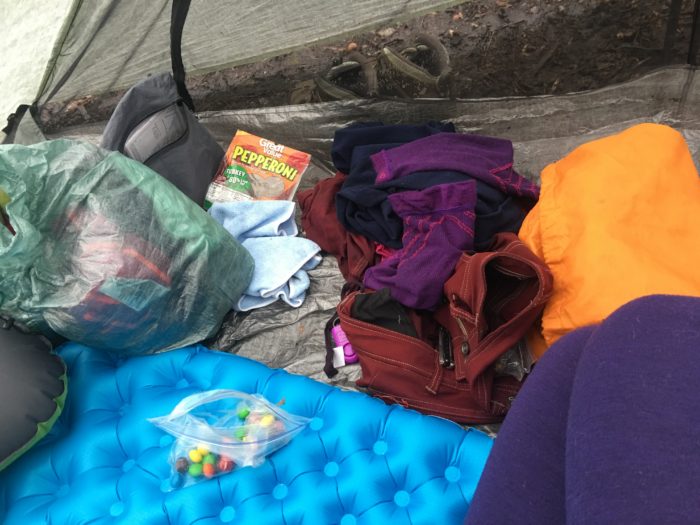 Sad, wet pile of clothes made better by snacks

It was only 3 pm so we took a short nap, hoping the rain would let up enough for us to continue to the next shelter. When we woke up we found that another tent had joined us, and the rain was not letting up one bit. We made dinner precariously in the tent vestibule, which consisted of Louis boiling the water while I was terrified he would burn a hole in my tent! We weren’t very hungry considering we ate almost all of our lunch snacks waiting for the rain to let up.

It started to get dark and the rain finally slowed, so we contemplated hanging our food bag. We also considered sleeping with it in our tent, but made the decision that we have long lives to live that we don’t want to prematurely end with a bear mauling. Thankfully we managed to stuff everything in my Ursack and tie it to a tree instead of dealing with potential facial trauma from the flying rock in the dark.

We’re hunkered in for the night with the occasional plink of tree water falling on our tent. Tomorrow is a 10 mile day to Hogpen Gap then a zero! A hot shower is in my near future and I’m overjoyed.

We woke to mud and moisture splattered over most surfaces inside the tent. Apparently, when you set up a tent in a mud hole, the rain splashes on the ground and leaves mud flecks everywhere. No matter, since a hotel day is in our future! We packed up our muddy and wet clothes, tent, pack, and everything else inside them and headed the few miles for Neel’s Gap where Louis’s car was parked. The plan was for Louis to get his car while I hiked on 7 miles to not lose mileage. We hiked up and down Blood Mountain, and got lost at the summit because of the dense, thick, fog. We eventually found the white blazes behind the shelter and continued on descending the mountain. 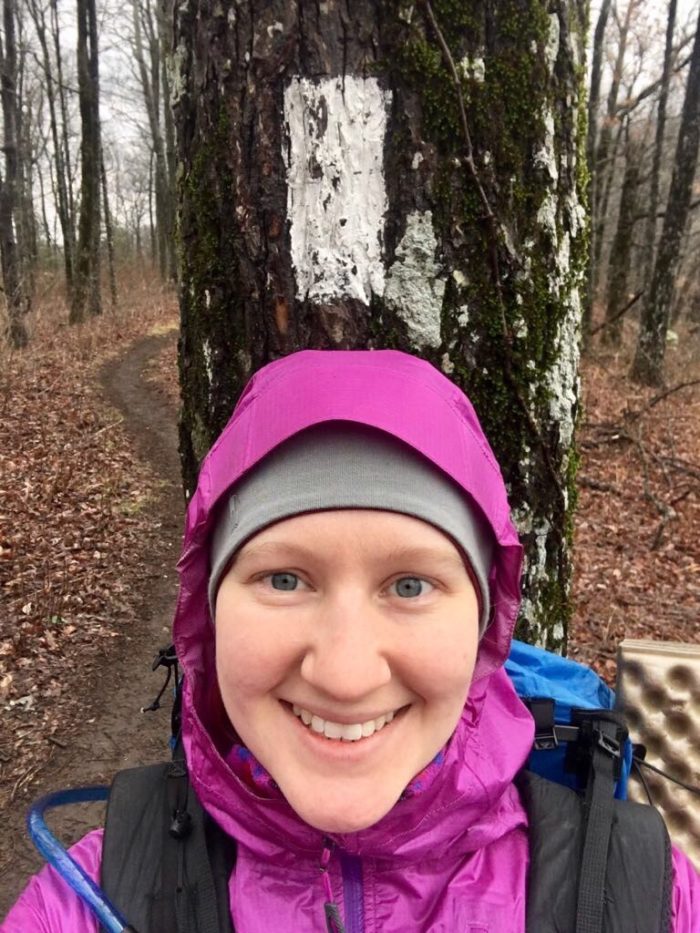 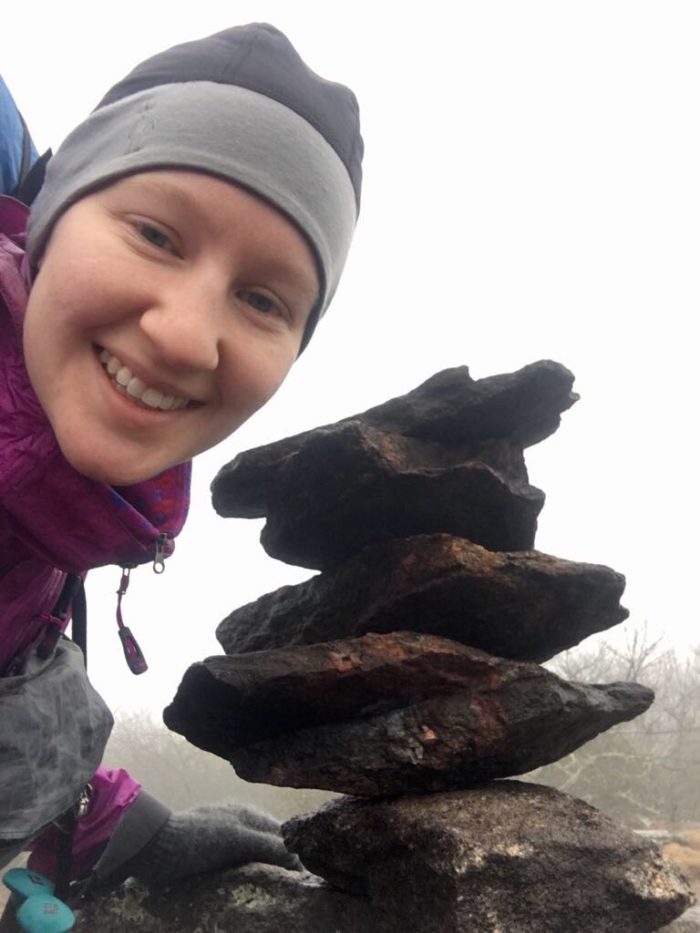 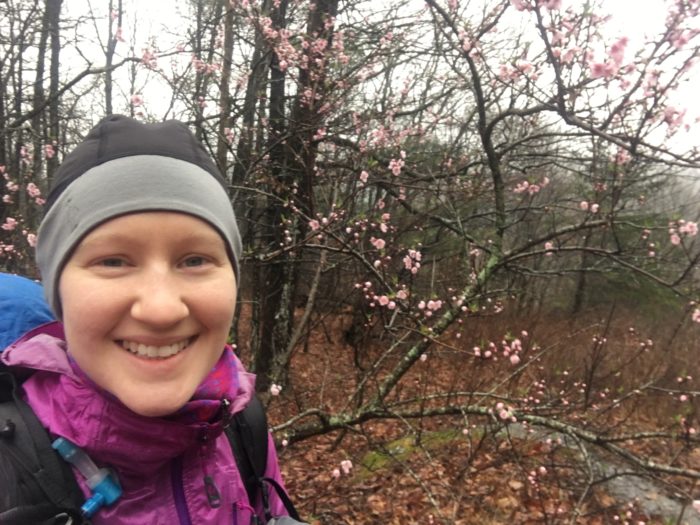 A nice little surprise: a tree with little pink blooms on Blood Mountain

Right off the trail is a store called mountain crossings that I pursued while Louis did the short walk to get his car. I changed to a smaller pot (900 ml to 550 ml) and got a snickers bar and a Gatorade (I’m hooked on orange Gatorade since our shuttle driver Ron gave us the orange Gatorade powder).

I met a couple there named Engine and Caboose who I had already read about on The Trek. It was awesome meeting some of the people whose blogs I had checked out in real life! We talked for a while about chickens and the trail, and they said they were taking a zero today because the weather was calling for thunderstorms and tornados. I was still planning on hiking 7 miles to Hogpen Gap and having louis pick me up, but the thought of ending up like the Wizard of Oz made me think twice.

I decided to go anyways since the forecast looked like the thunderstorms were holding off for a few hours. When Louis got back from picking up his car, I dumped most of my non essential gear in the backseat and slackpacked my way to Hogpen Gap.

Slackpacking was like a dream. I felt like I was flying! I leapt over rocks I would normally trudge over with my fully loaded pack. I listened to music the whole way (Trolls soundtrack) and overall had a really enjoyable hike. That is, until I hit the last little mountain before Hogpen. Engine had warned me that there was a climb so steep you could touch the rocks in front of you. He wasn’t joking. This was a beast slackpacking and it would have taken twice as long with 25+ lbs extra weight.

Louis graciously picked me up after finishing that crazy mountain, and I felt exhausted and well overdo for a hot shower. While I was hiking, Louis went on adventures “yellow blazing”, meaning shuttling people to and from stores. He absolutely loved it. He said he now has a new hobby and wants a yellow blaze decal for the car. He also came back with lots of goodies to leave for trail magic. I’m happy he’s embracing the hiker lifestyle as a trail angel.

We checked into the hotel and I marveled at the soft pillows and scrubbed my dirty fingernails for what felt like hours to get them clean. After a shower and clean clothes, I feel like a new human and I’m getting ready for some serious relaxation tomorrow.

Today is my zero day! I spent the day organizing and cleaning my muddy gear, grocery shopping, tending to feet, and lounging. It was glorious.

We also made a trip back to mountain crossings so I could get an adapter for my sawyer squeeze. Dinner was a burger and broccoli slaw that tasted incredible. 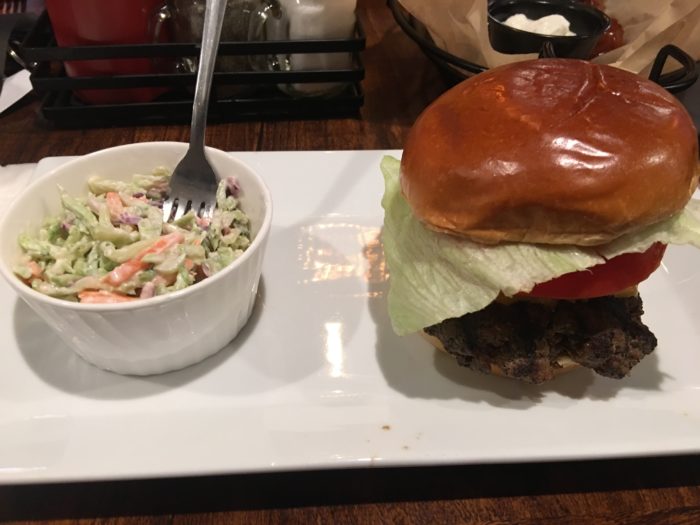 Burgers taste way better after hiking through rain and mud

Tomorrow will be bittersweet leaving Louis and starting this journey on my own.