Hiking the Gibsonville trails at Letchworth

I don’t live close enough to the AT to do my prep hikes on it. Thankfully, New York State has an abundance of beautiful places to hike. Letchworth State Park is less than an hour’s drive south of Rochester. I have spent many hours and days at Letchworth in my 70 years. I am getting there about once a week, gradually adding miles to the feet and weight to the pack. My REI Flash 55 weighed about 20 pounds this time. Next time out I’m wrapping a ten-pound dumbbell in my extra coat.

I had skipped over the Gibonsville Trail in Letchworth because the trail guide said, “Half mile. Easy. Thirty minutes.” I had been there once on a photography field trip several years ago and saw no reason to go back. An Instagram friend told me to check it out. I’m glad she did. Some maps are out of date. Others are really out of date. In this case, that was a good thing.

A bit of background

The various sources agree that the hamlet of  Gibsonville existed from about 1825 – 1900. At its peak, Gibsonville was home to sixteen houses, a general store, post office, shoemaker mill, blacksmith and a primary school. The remains of the settlement are long gone except for a stone bridge over a creek that runs through the area.

From 1933 to 1941 the Civilian Conservation Corps (CCC) had a worker camp here. The ruins still visible are from the CCC camp, including one lonely looking chimney in excellent condition.

There are three numbered trails.

I had the Ondu 135 pinhole camera with me. You may see those photos later. I inadvertently left the Argus C3 at home. So today you get cellphone photographs. The only editing is with the Instagram editor, which does a remarkably good job with simple contrast adjustments and the like.

On to the trail 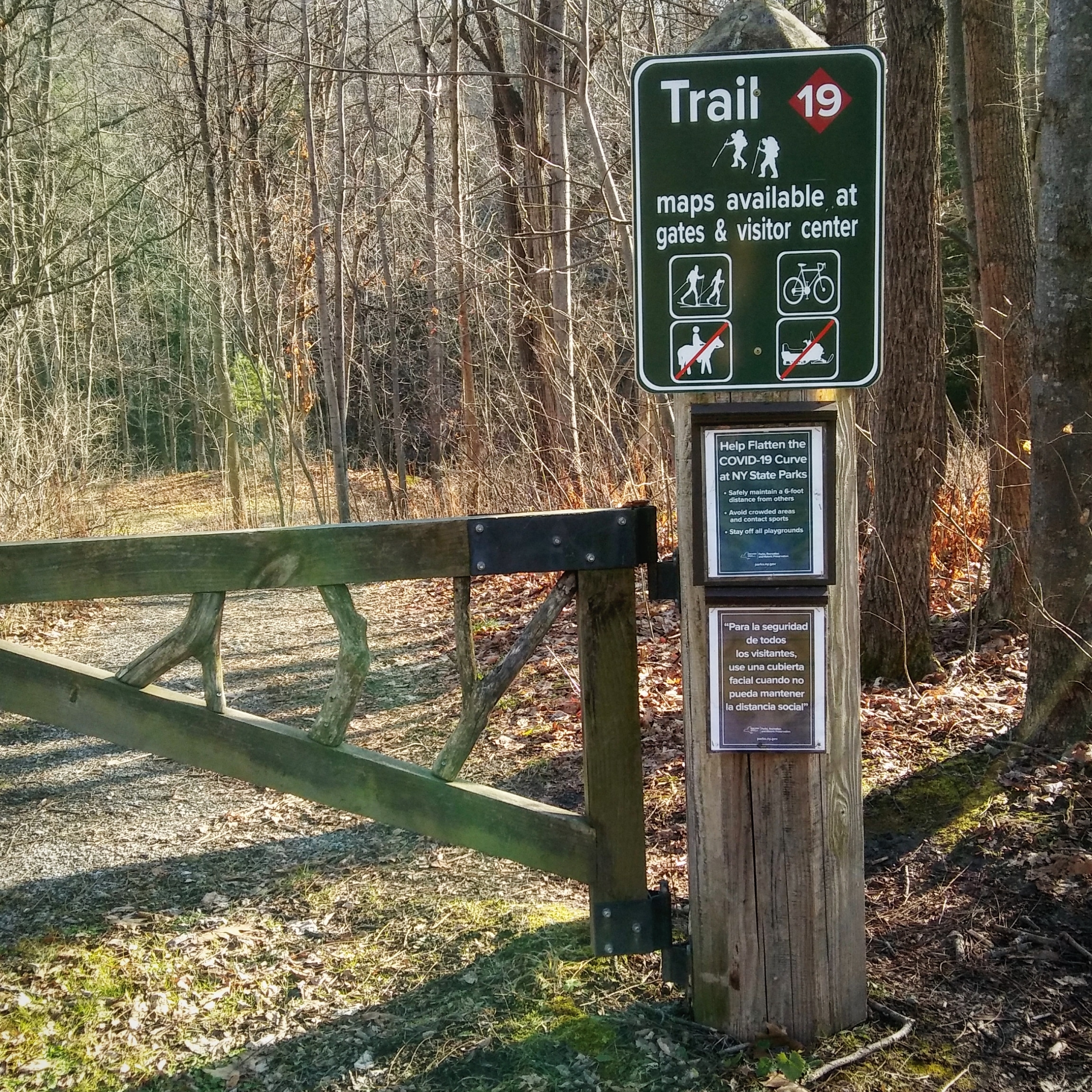 I started at the trail 19 trailhead by the Silver Lake Outlet bridge and walked towards Gibsonville with the short side loop along the way. 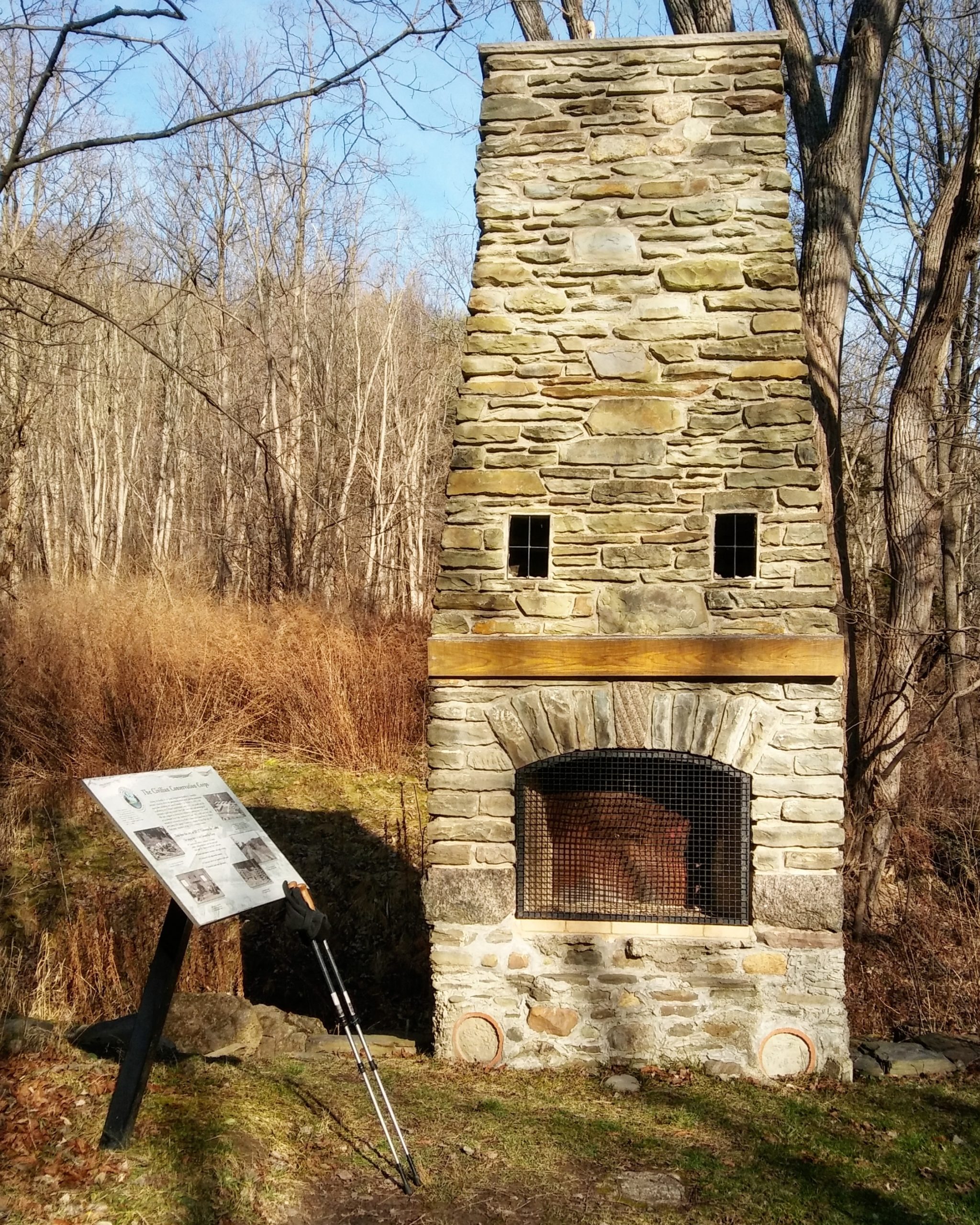 The elegant fireplace and chimney are from the CCC Officers’ Barracks. The placard has a photograph of some of the occupants lounging in the great room by the fireplace. There are  far worse places where one could have been stationed. 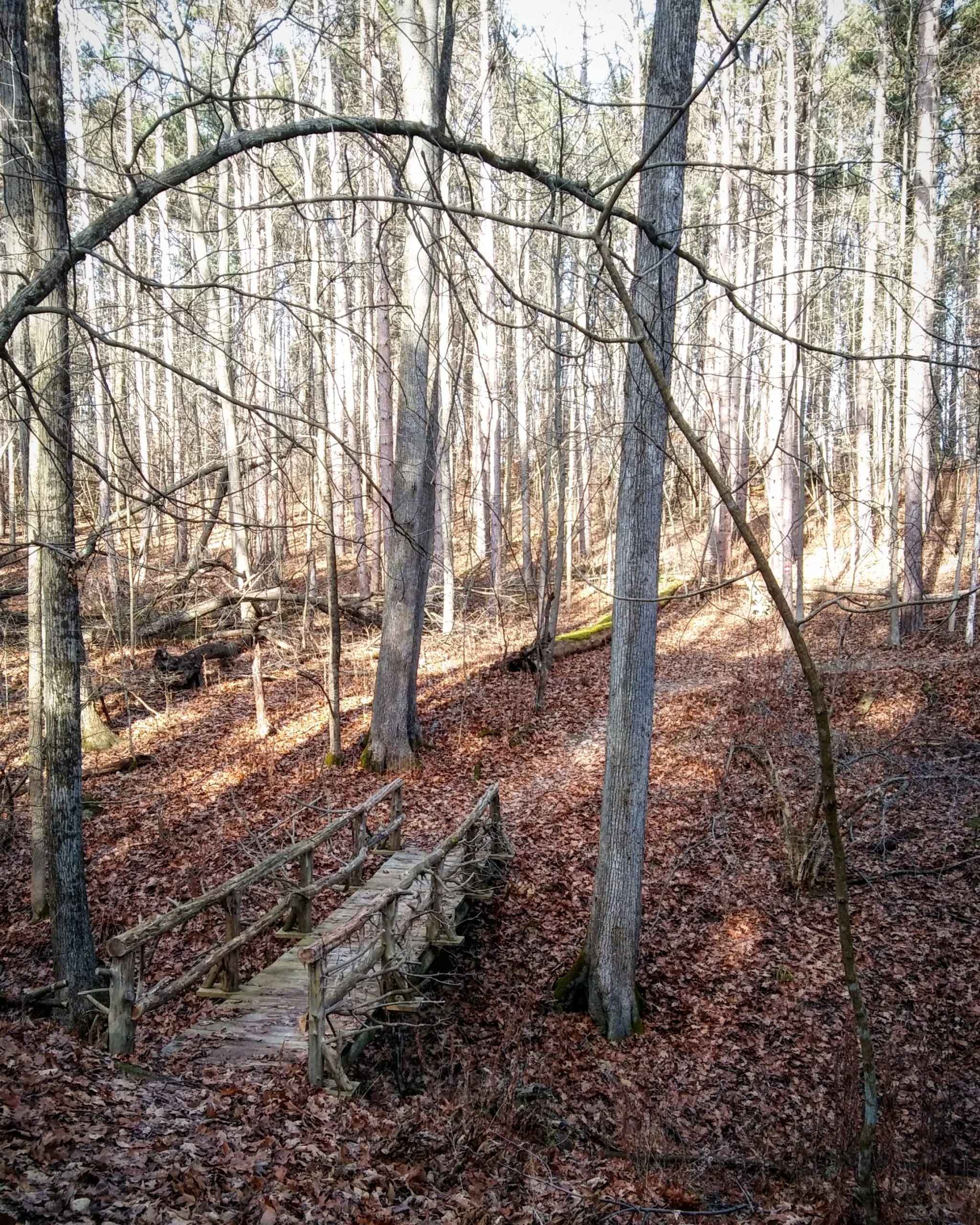 From Gibsonville I took trail 19 on the long and hilly path along the Spring Lake Outlet and on around to the 19a junction and unmarked Park Road access point.  This is the section the trail map didn’t tell me about. The trail was beautiful, with lots of climbing up, down and around hills. A bit before the 19a junction the trail crossed a lovely rustic bridge. Thanks to my friend Sue for alerting me to it. 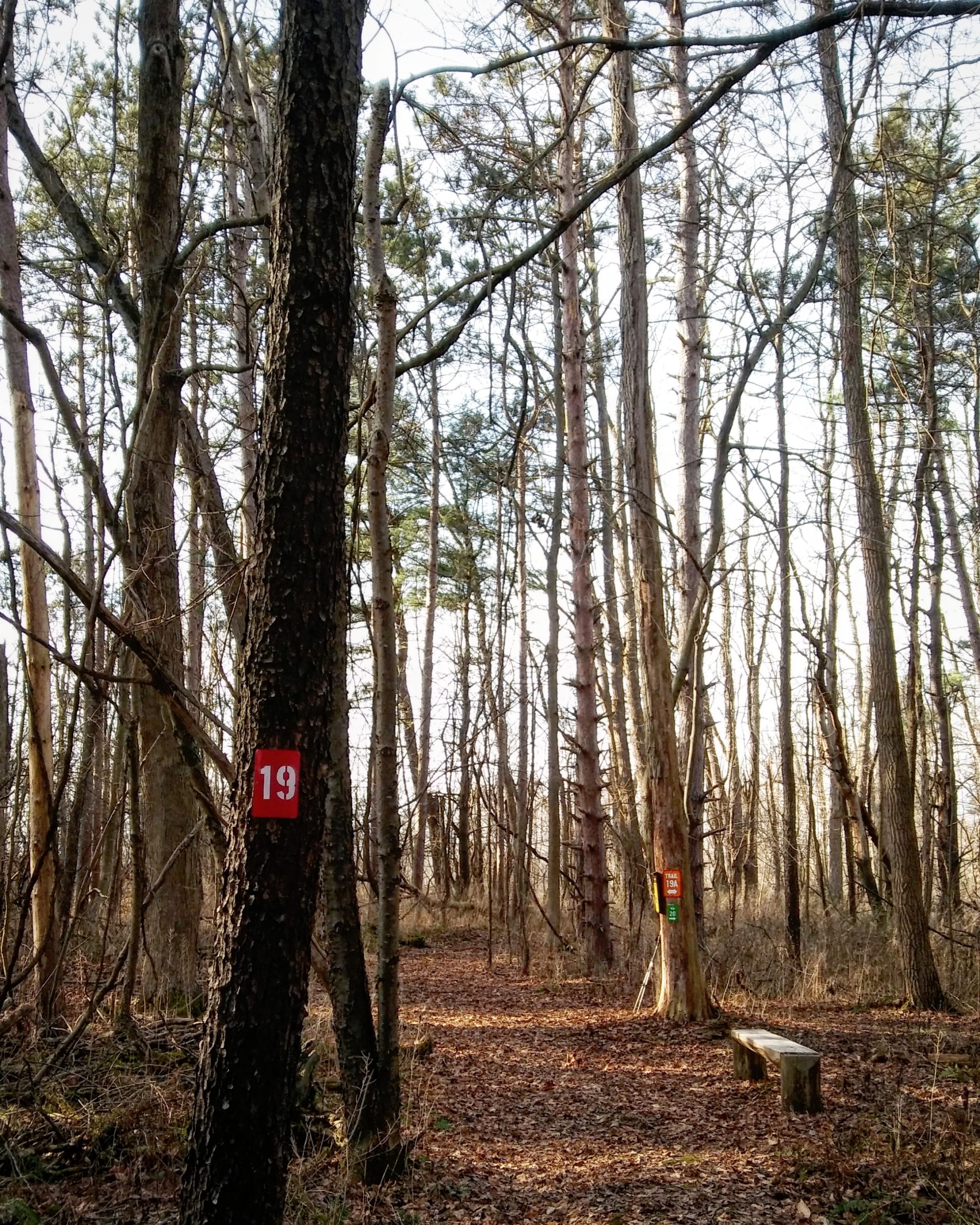 I took advantage of the bench for a sit and snack break.

From the junction I headed north along 19a to the cabin area road where it becomes trail 20. A bit north along 20 was a brightly painted green and yellow post (of which I wish I had taken a photograph) marking a path east towards the gorge. The trail itself was unmarked. It appears to be a work in progress. 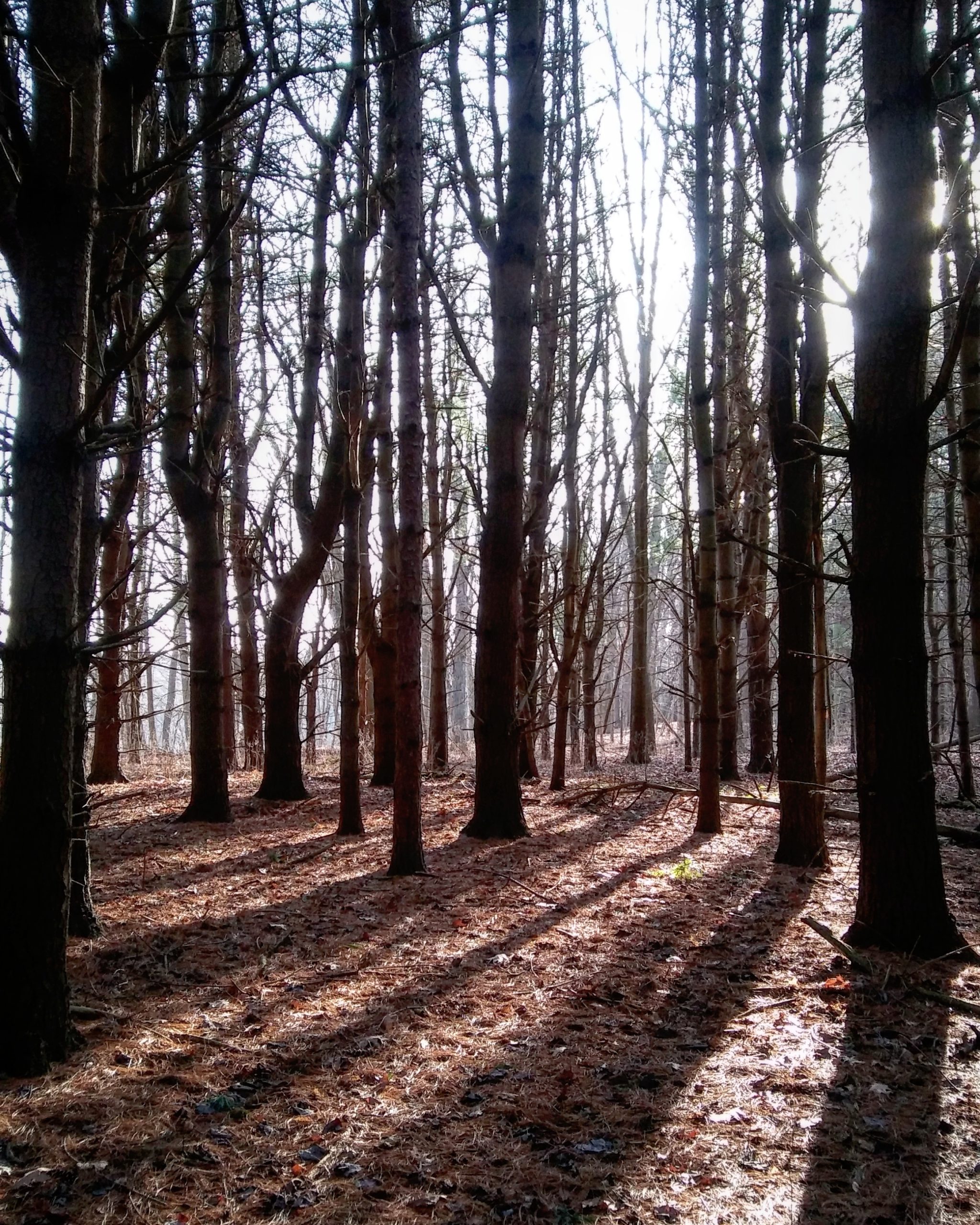 The trail followed the remains of an old two-track to a bluff, where it turned south to follow the bluff. Just before reaching the bluff the trail passed through a coniferous stand. It was beautiful with the sunlight filtering through. It is a place to inspire awe.

I stopped at the bluff to take pictures with the pinhole camera. I managed a rather clumsy fall as I lost my footing crossing back over a high log. Scraping my finger across the bark of a tree in the process reminded me to take it easy and be careful. (The finger appears to be doing fine today.)

Note to photographers: If you are going to shoot into the  sun like this with a simple camera, you can help the exposure — and be kind to the sensor — by keeping the camera in the shadow of a tree. 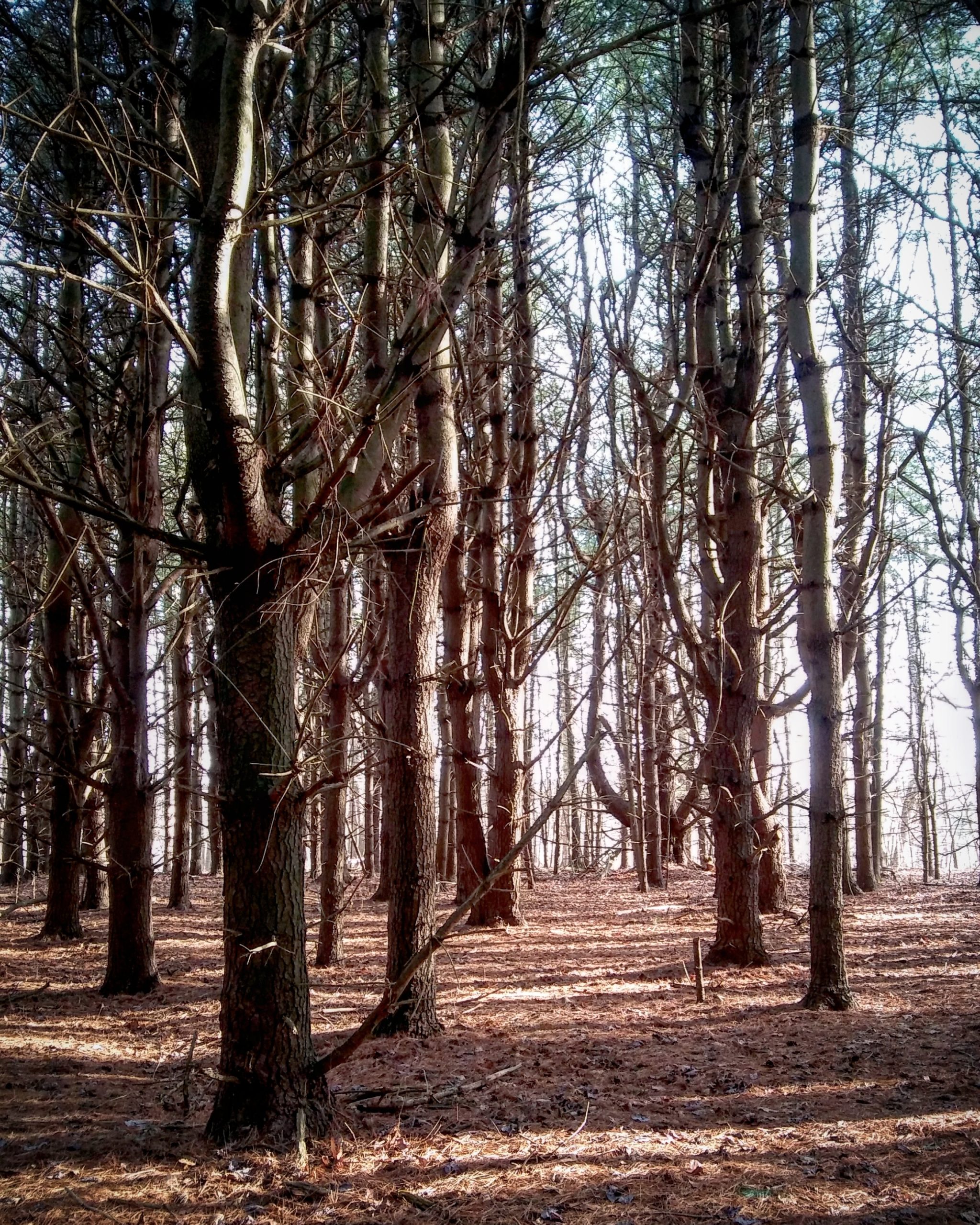 This spot rated two pictures, one into the sun and one across. As you can see, it is much trickier to follow an unmarked trail on pine needles than on old leaves. 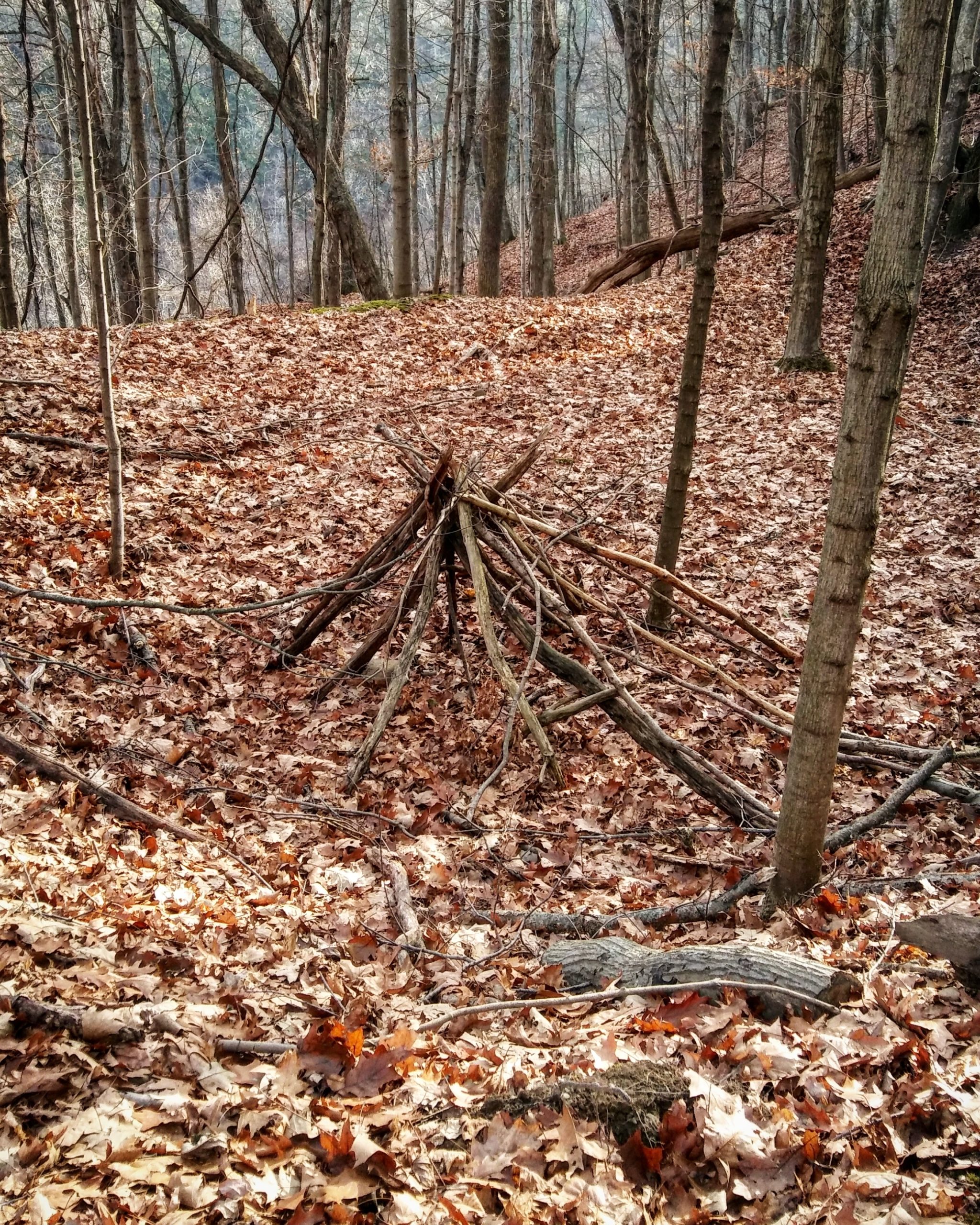 I came across this structure shortly after turning to follow the bluff. I have no idea who built it or why. But it wanted a picture. 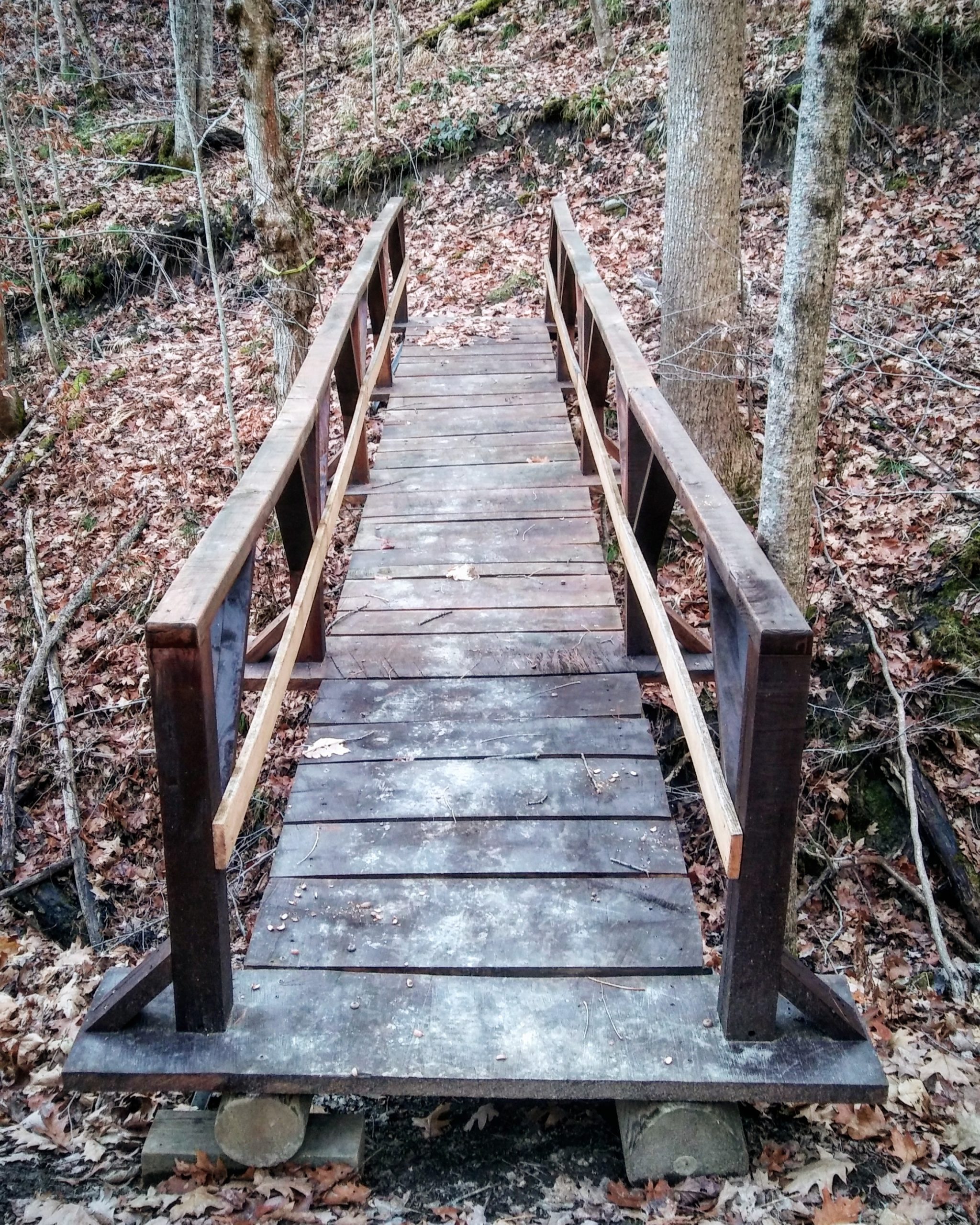 The trail crossed two bridges as it enters a section where the roadway is long-since washed out.You can tell the bridge is recent by the lack of flush approaches at the ends. 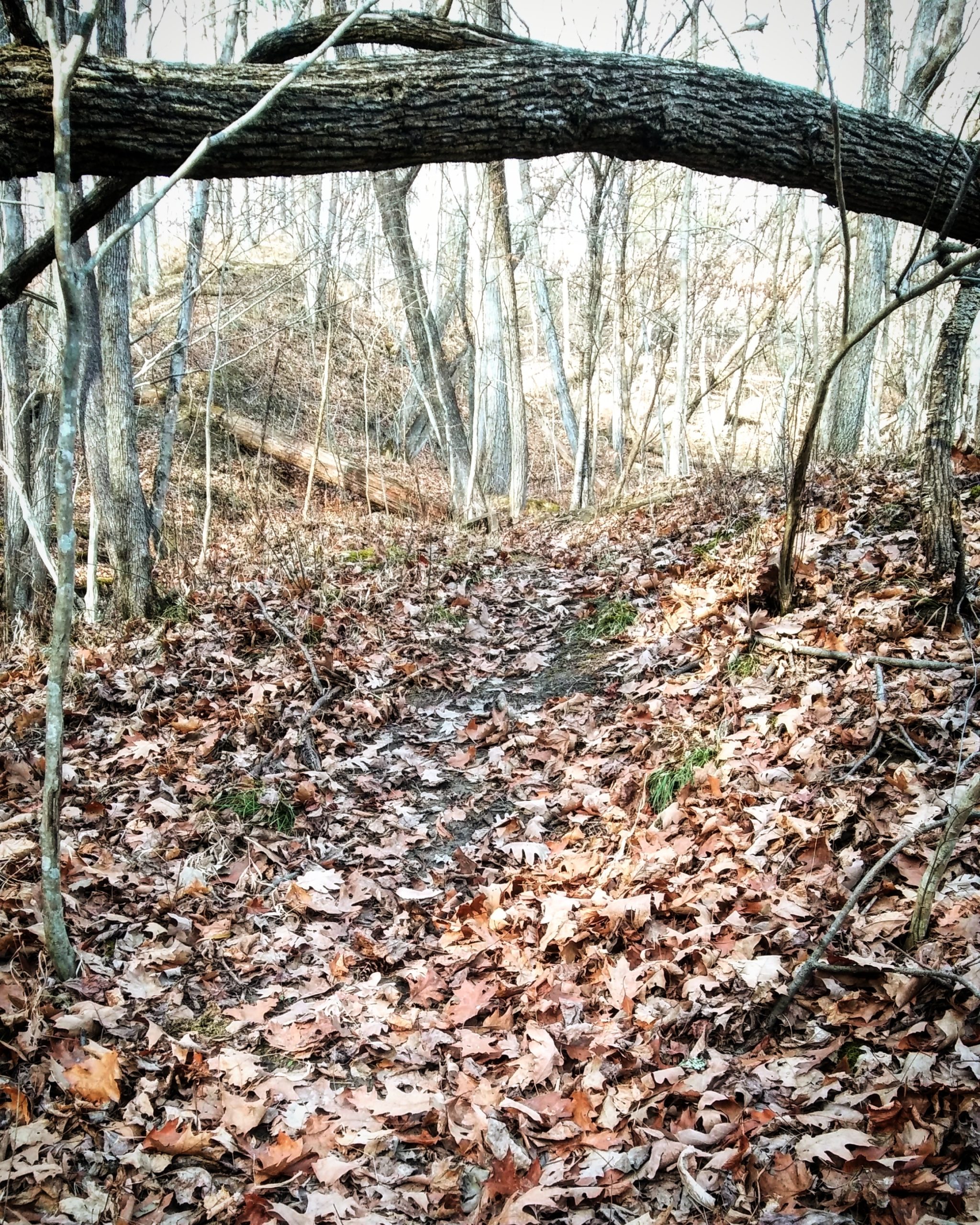 No roadway here, but the trail was still easy enough to follow as it meandered around the gullies. I took an almost graceful tumble along here as I hooked my foot on a stick covered by the leaves. Thankfully I have learned over the years how to tumble and roll without hurting myself. Army jump school and the “parachute landing fall” had a fair bit to do with that. 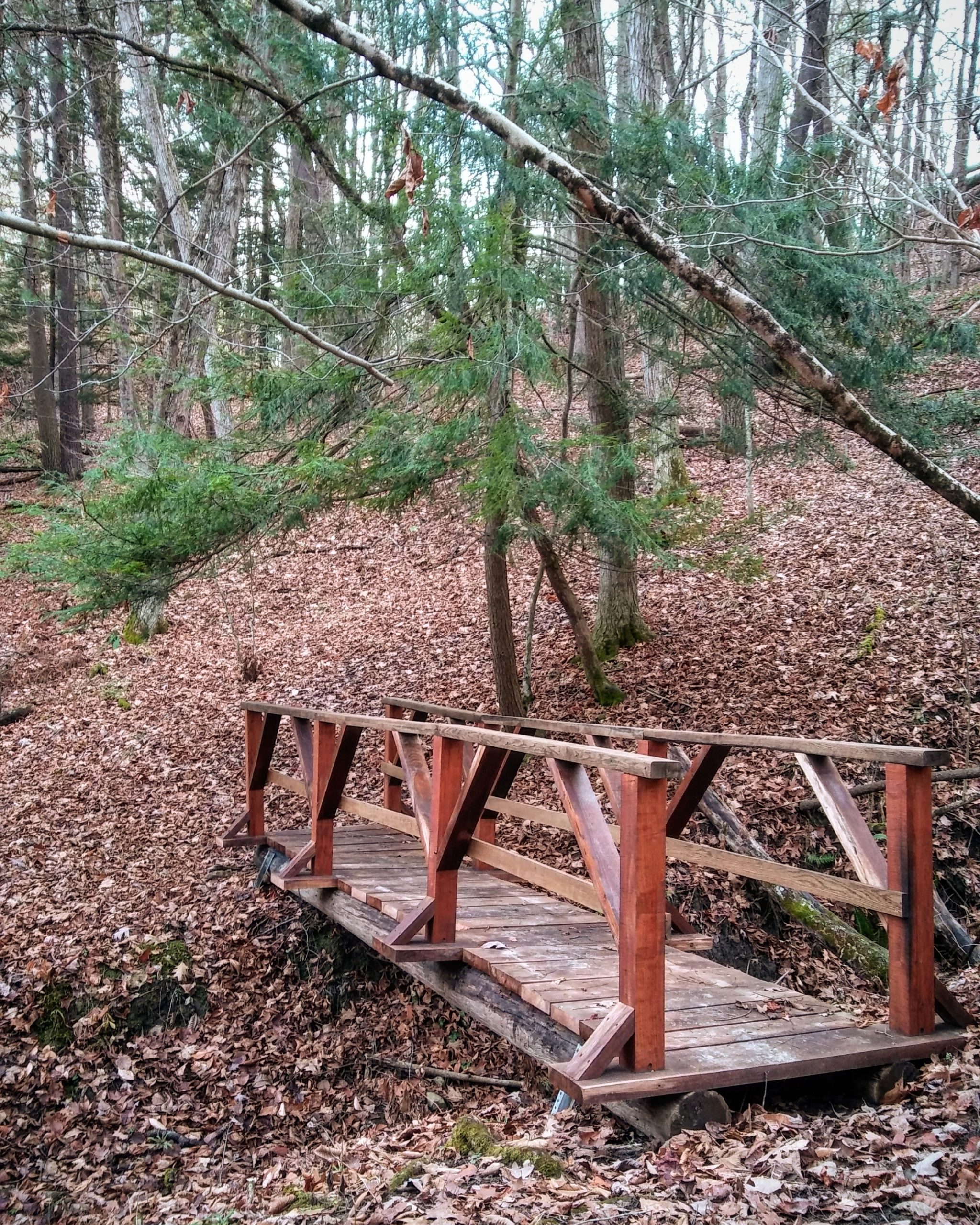 After the second bridge the trail degenerated rapidly, as if that section were in early stages of development. It was mostly followable. Periodic saw-cuts through logs confirmed I was still on the right track. It eventually joins trail 19 at an unmarked T and headed back to Gibsonville past the falls.

I started seeing red trail markers again and recognizing places, so I knew I was back on 19, though I did not know when it had happened. Thinking back I remembered at one point turning onto a faint path that ran in both directions. I did not recognize the spot at the time, but I’m pretty sure now it was the section I had walked in the opposite direction a couple hours before. 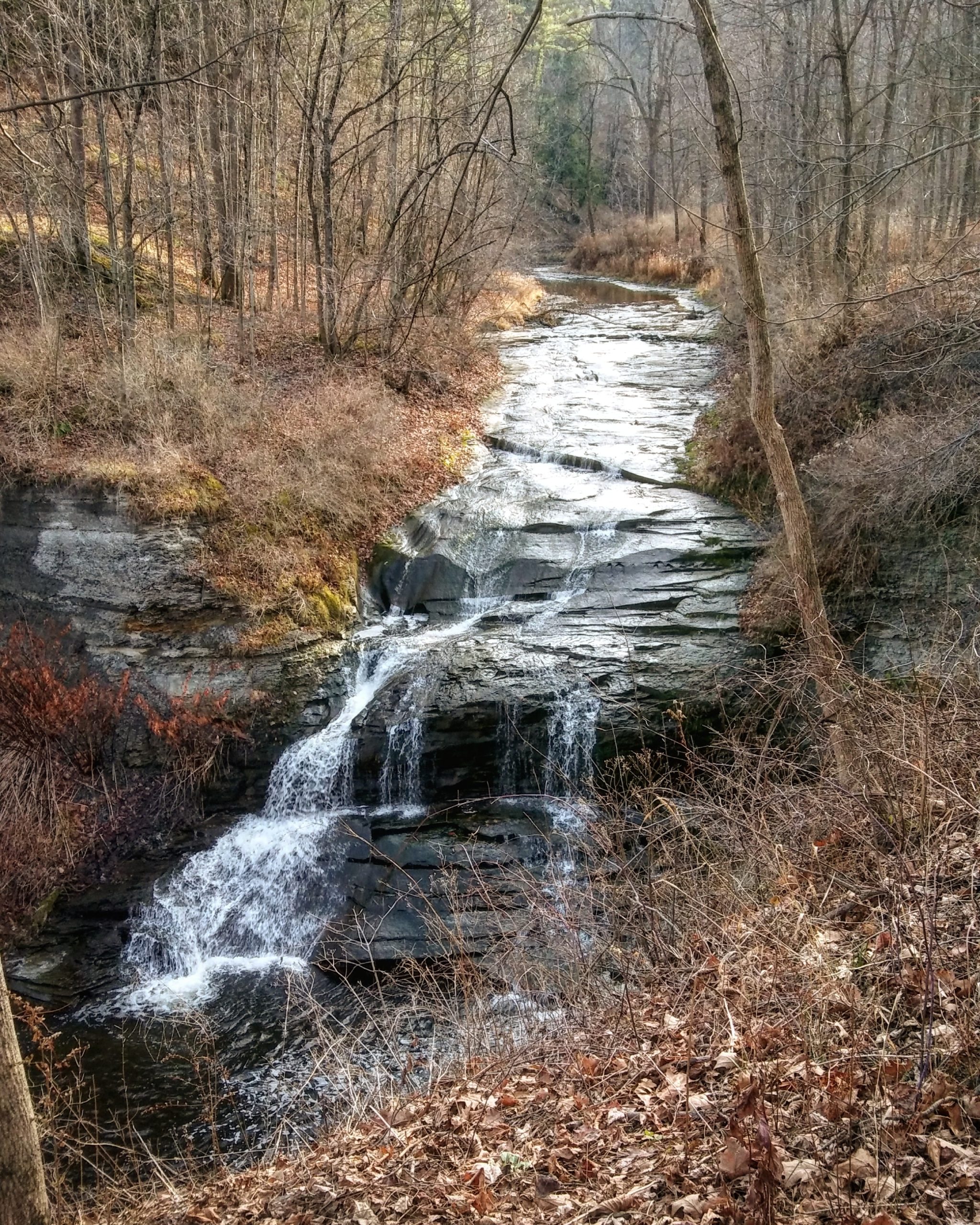 When I came by the falls at the beginning of the walk the sunlight on the water was gorgeous, but it was directly in my face. I took several photographs with the pinhole camera but I knew the old cellphone camera wouldn’t stand a chance. The light had dimmed and shifted by time I came through at the end, so I was able to get a decent photograph with the phone.

I spent just over four hours on the trail, including picture-taking. I’m estimating total mileage of six miles or so. No, I am not a fast hiker, which is one of the reasons for the prep hikes.

That’s all for today. In the  next post I’ll tell you about my Ondu 135 pinhole camera. With photographs, of course.