Following a restful week off the trail, at home in Atlanta with family, I drove a rental car back to the place where I left off, the south entrance to Shenandoah National Park. I wish the drive back had been a little less eventful, but that’s another story. Let’s just say I was relieved to be back on the trail.

It was a good day for a hike, mostly sunny and not too hot. My backpack was fully loaded with a five-day supply of food and all my gear cleaned up or replaced. I switched back to the Altra shoes because the Hoka shoes just don’t fit me as well, although they are a well-made shoe.

It was a late start at 9:15 in the morning but I got moving pretty quickly and made some miles before the afternoon heat started. Fluff and So Huh started just behind me and we ended up leapfrogging all day. Turns out they were headed to the same place as I was. After a bit of a chat I discovered So Huh had started at Springer Mountain, Ga., the same day as me.

Around 1 in the afternoon I decided to take a lunch break at Calf Mountain Shelter, where I met Midnight, Butter Cup, and Boo Boo, their dog. It was a brief pause and I got back to the business of hiking because the goal for the day was over 20 miles and I wanted to get to bed as early as possible.

The afternoon’s hiking was highlighted by several deer encounters and two relatively close bear sightings. Around 7 in the evening, Fluff, So Huh, and I arrived at Blackrock Hut. The other guys decided to fill their water bottles and continue. I was done so I set up camp and called it a day.

Rambo was at the shelter; hadn’t seen him in many weeks. Several others were already there and a couple arrived at dark and pitched a tent near mine. Everyone settled in quickly and the place got quiet, except for the occasional motorcycle driving along Skyline Drive. 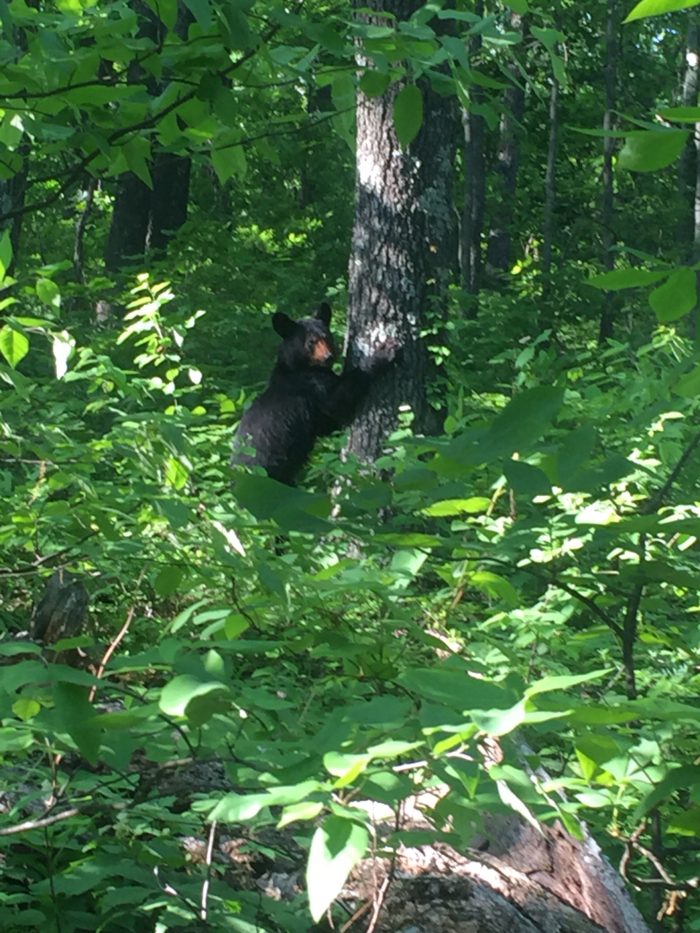 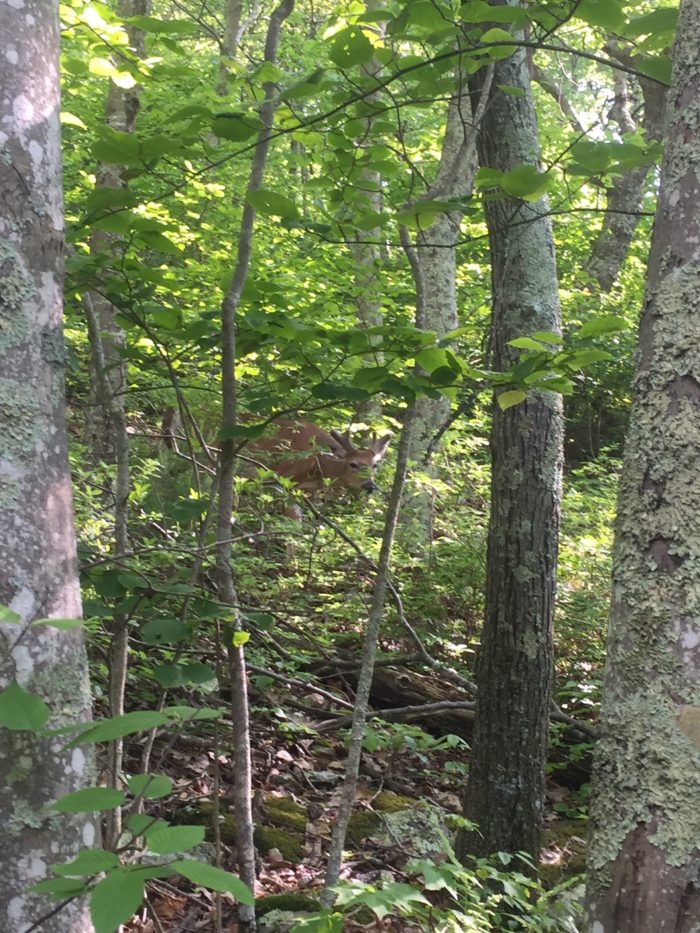 Packed up and left Blackrock Hut fairly early, Rambo must’ve gotten out of there before I did because I ran into him at the first picnic area, where we both took a short break.

Rambo cut out and was heading to the camp store up the trail for an afternoon adult beverage. While hiking in that same direction I met Ox, a youngster from Colorado whose shoes were falling apart. Together, we arrived at the camp store and found Rambo, Comfortably Numb, and Fractured Diamond enjoying a cold beer. I ate my lunch and had an ice cream bar before I continued hiking.

I had originally planned on doing 22 miles or so but when I stopped in Pinefield Hut for water, the the sky started rumbling. Train Wreck and Jessica, plus a section hiker, were already there and settled in, so I decided to join them.

A little while later Stellar and Battlelion arrived and ate a quick dinner and continued into the foul weather. They were smashing out 30-mile hike that day – ouch!

It did eventually rain, but not all that much. Still, I was happy to be in my tent and not hiking in the rain. 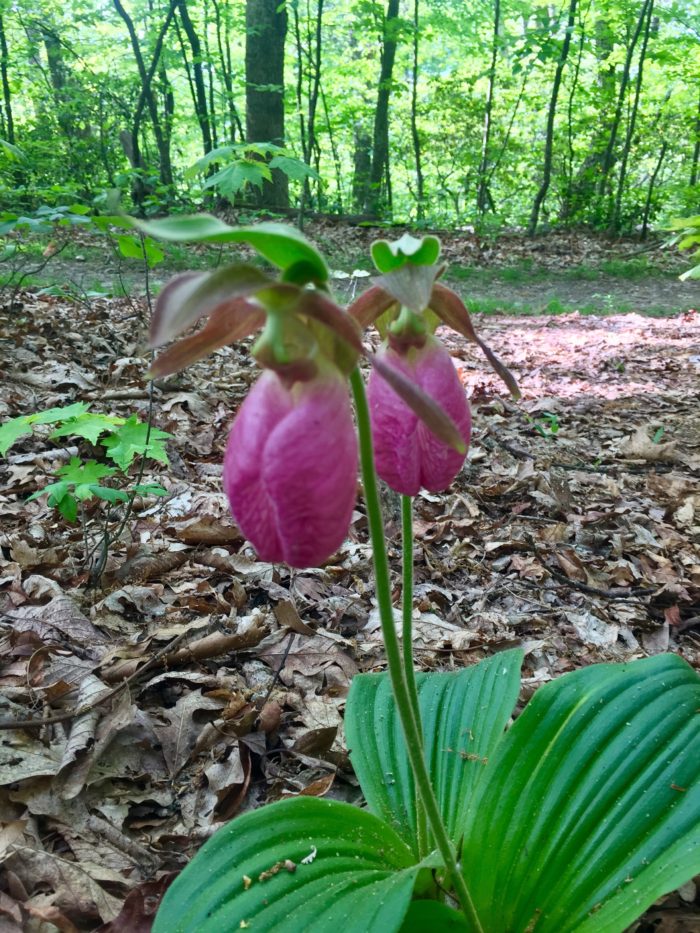 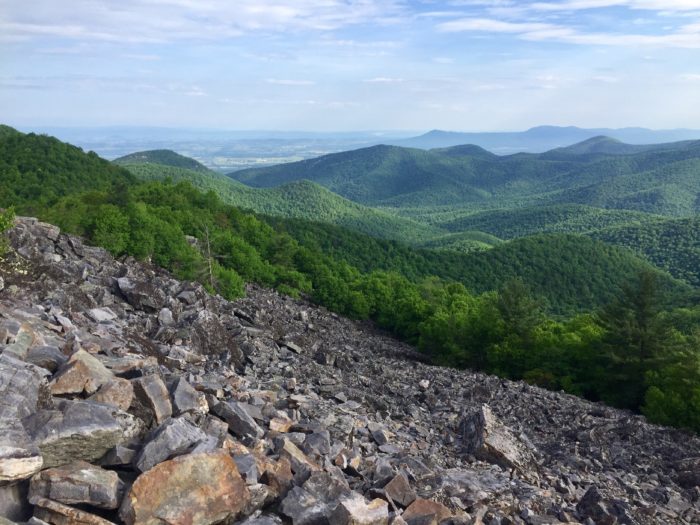 Slept well just up the hill from a nice-flowing stream. Packed up and started hiking by 6:30 in the morning. Stopped a few miles in and had breakfast. Another mile or so and I passed the 900-mile marker. Met Root 66 there with his wife and their dog; he is thru-hiking and she is traveling along in a truck, meeting him at road crossings.

The long climb up to Hightop Hut was surprisingly challenging, surprising because it didn’t look too tough on the map. Stopped at the hut for water and chatted with Stellar and Battlelion, who were getting a late start after crushing 30 miles in the rain yesterday.

There was amazing trail magic down at Skyline Drive in the Hightop Mountain parking area. I stopped and ate three sloppy joe sandwiches, two bags of chips, a Honeybun, peanut butter cup, and two Cokes. Man, that was great! Rambo had been there but left before I arrived. Root 66, Stellar, Battlelion, Ballew, and several other hikers all joined in the feast.

When I started hiking again, not even 100 yards from the trail magic, I had another bear encounter. That’s four so far.

The rain was threatening so I hiked the next 10 miles quickly and arrived at Bearfence Hut just moments before the downpour. Set up my tent in record time and jumped inside just in time.

About an hour later the rain eased up so I fetched some water and fixed dinner. Backpackers Pantry Pad Thai with Chicken is my new favorite meal. Stellar, Battlelion, Ballew, and several others arrived at the shelter some time after I did. Some of them looked wet.

Spent some time stretching and loosening up after the hard hiking, then called it a day. 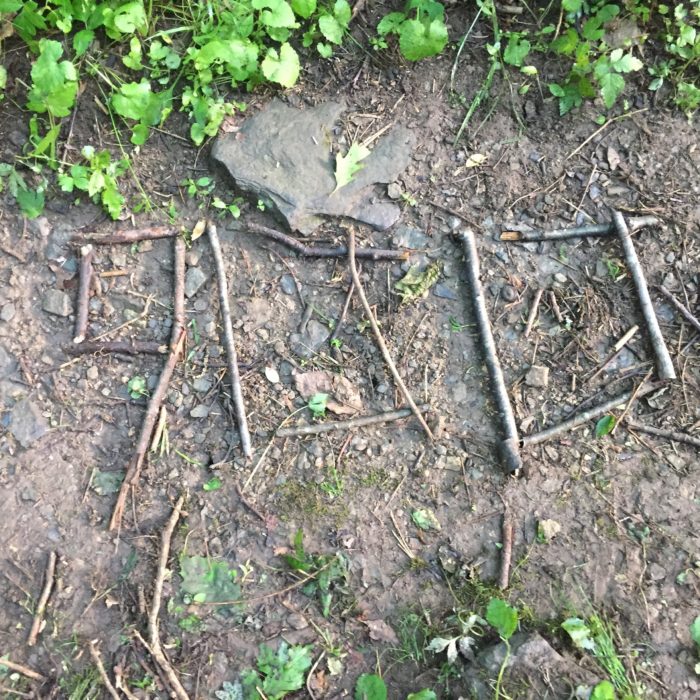 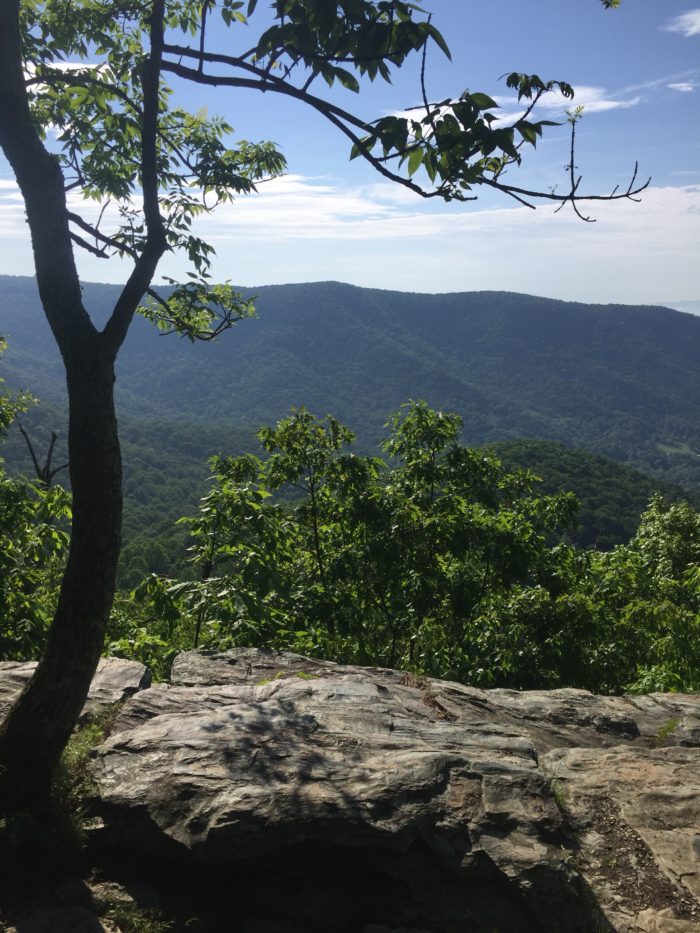 Decent night’s sleep in spite of an all-night rain. Not an early start, maybe around 7:30 in the morning. The plan was to go only about 11 miles to Rock Springs Hut but also included stops at Big Meadow Wayside for lunch and supplies, then to the campground for a shower and laundry. Almost made it all the way, but came up 2.5 miles short.

After hiking a mile or two this morning, I stopped under an interesting rock formation to make breakfast. It was a great spot to hang out and as I was leaving Gnome walked past. He’s about my age and lives in Franklin, N.C. We had a nice chat about the music from our era: Allman Brothers, Hendrix, Zeppelin, and more. Hopefully we meet again up the trail.

At the side trail to the wayside I met Jessica, a young lady section hiking alone. We had lunch together and and I enjoyed her company. The blackberry milkshakes were amazing. Resupply was expensive there but fortunately I didn’t need much.

Walked down to the campground and got the laundry and shower that was overdue. Then the heavy weather rolled in and hikers were coming in to snatch up campsites. With freshly laundered everything I decided not go on and risk getting soaked and muddy again so I set up camp in a spot right next to the AT.

While at the campground I decided to go see Big Meadow Lodge, a magical building built of native oak and chestnut. The lodge was built in the 1930s and is on the National Register of Historic Places. I hung out there for a while and the weather cleared up a bit, giving me some good photo opportunities. The lodge had Wi-Fi so I took advantage by posting some social media stuff and phoned home. Eventually the restaurant opened for dinner and I ate a wonderfully huge dinner and a blackberry sundae for desert.

The forecast says rain all week so I guess I’m going to get soaked and muddy anyway. Such is life on the AT. 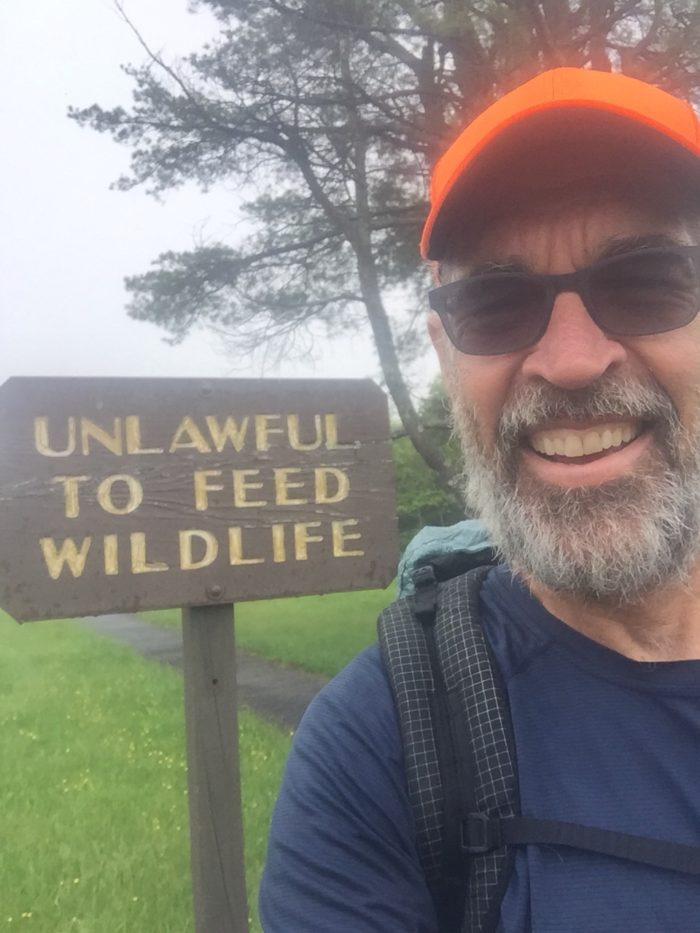 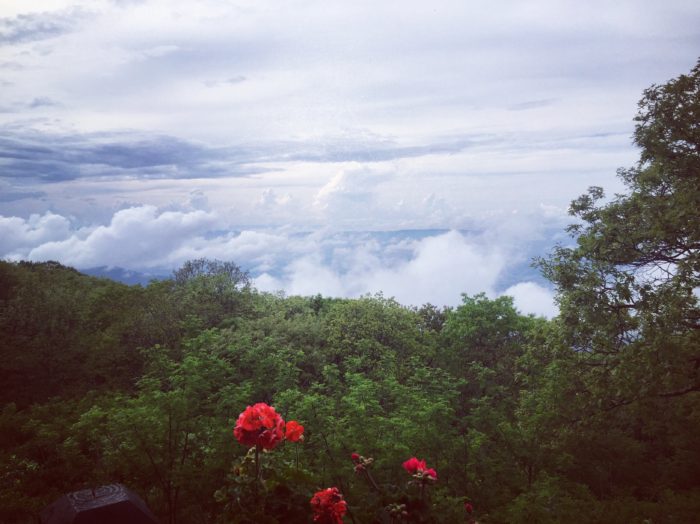 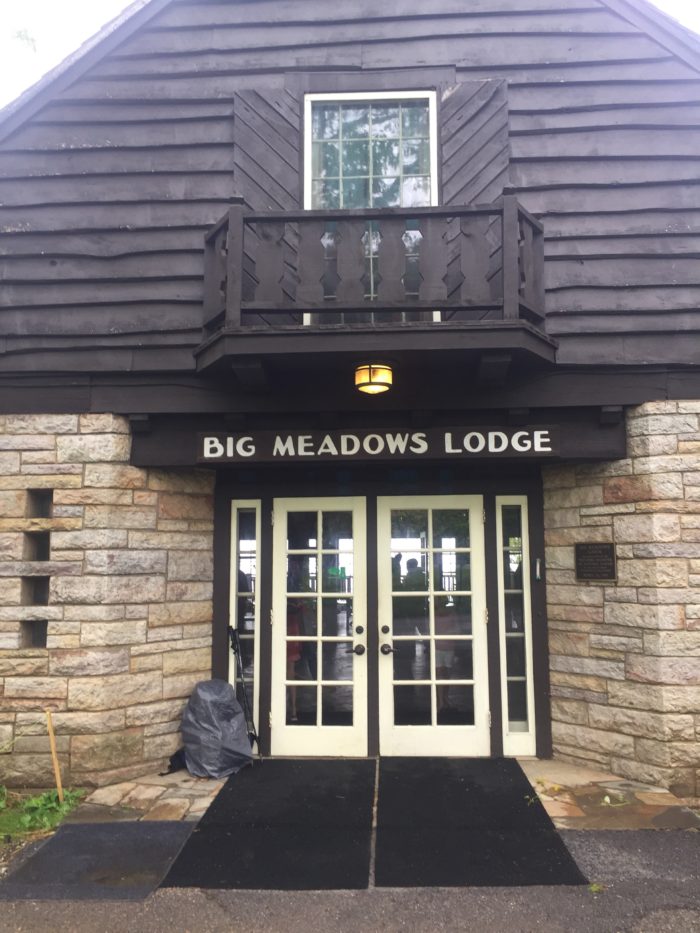 Big breakfast, then started at 7 in the morning. Passed Rock Springs Hut, where I had intended to finish yesterday, then started aiming for Skyland Resort.

At the resort I scored a real nice sandwich, fresh pastries, and a latte. Also had a nice chat with the fellow who works at the bar there.

My next stop was at Pinnacle Picnic Grounds to fill up my water bottles and sit down for a minute. A couple of thru-hikers from northern England, Ed and Elaine, arrived about the same time and I had the same idea.

Just past Byrds Nest #3 Hut and had another bear sighting, got a short video. Videos are at Champ Hikes on YouTube.

About a mile from my destination I met Sushi, who was slack packing a section southbound. First met her at Stanimal’s right before heading home to Atlanta last week.

Little Spoon and Produce, both youngsters from Canada, were already settled in at the Pass Mountain Hut. Ed and Elaine showed up later and pitched their tent next to the shelter. 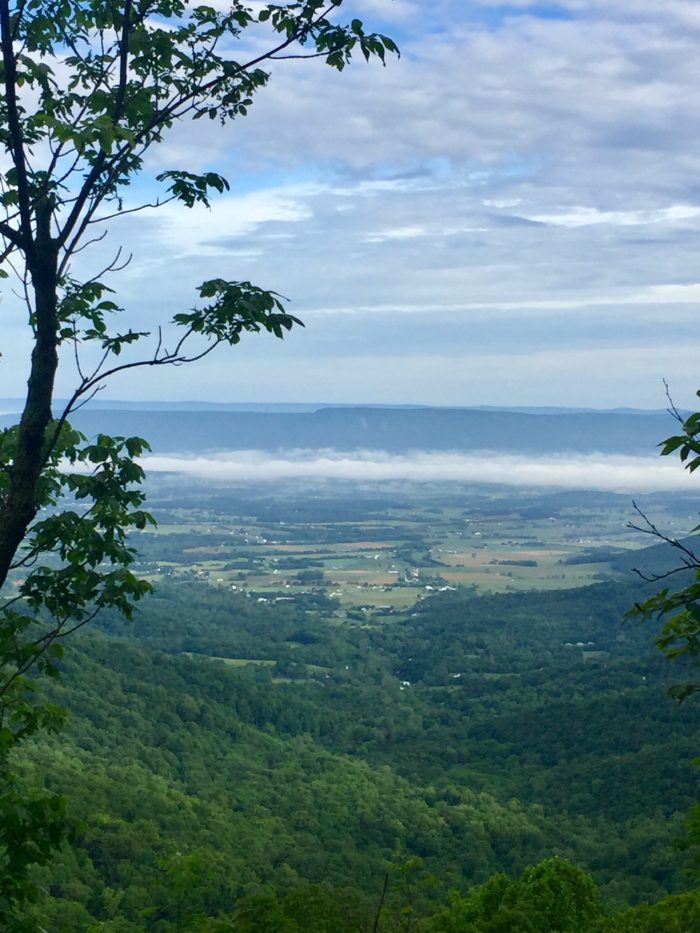 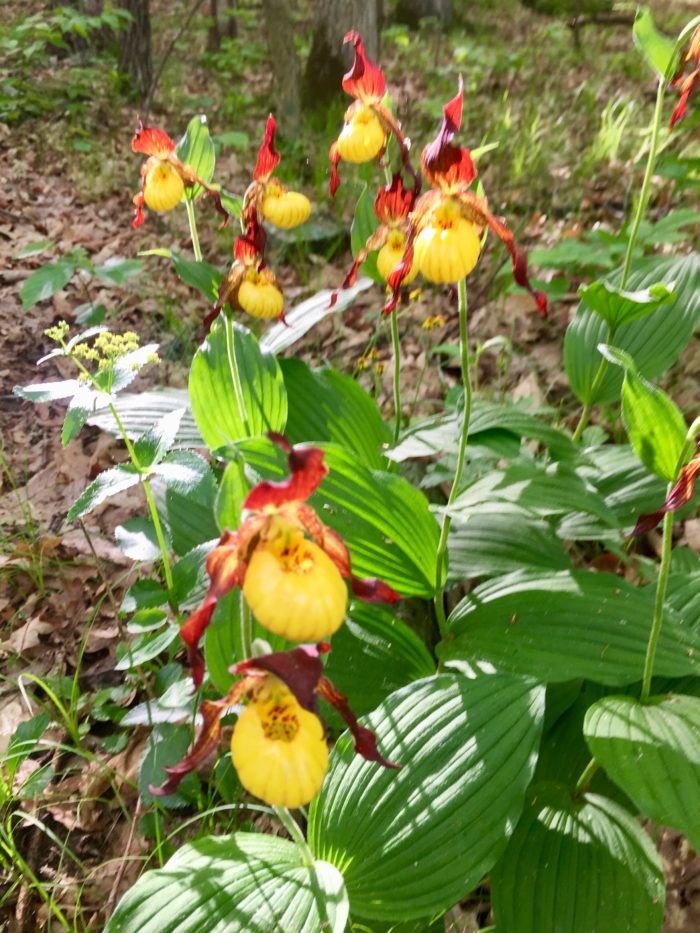 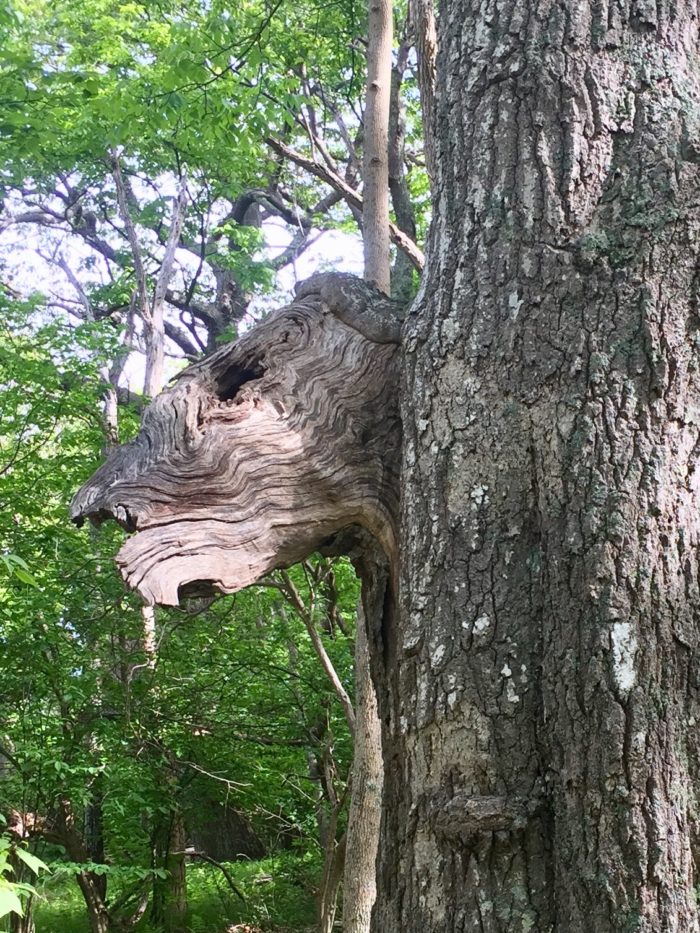 Had a nice little campsite behind Pass Mountain Hut and got a good night’s sleep. Little Spoon, Produce, and I got up early and headed toward Elkwallow Wayside. They serve a full breakfast and have fresh pastries, so I had to sample the goods. Ed and Elaine showed up and so did Honey Badger and Smiles; met them back around Grayson Highlands. We all had some breakfast together. Unfortunately, the heavy rains started just as we were getting ready to resume hiking.

Rain. Whatever, just put on your rain gear and start walking. While I was going up one of the climbs I met a day hiker named Rose, from Front Royal. She is planning a SOBO thru-hike starting June 10 and is out training for it. I told her I was going to spend a night or two in Front Royal. She said she would get in touch with me later.

When I arrived at Gravel Springs Hut the weather was looking very threatening so I picked out a campsite and pitched my tent. It started raining heavily around 5:30 p.m. and continued all night. 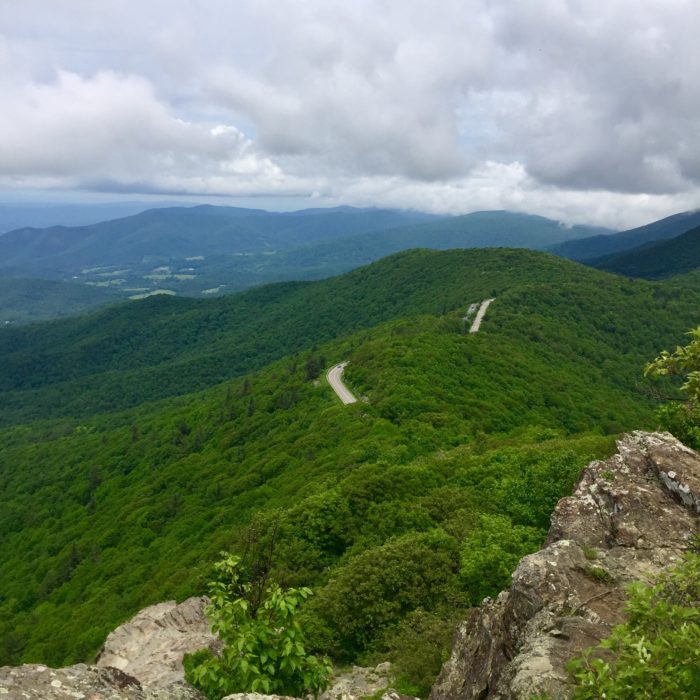 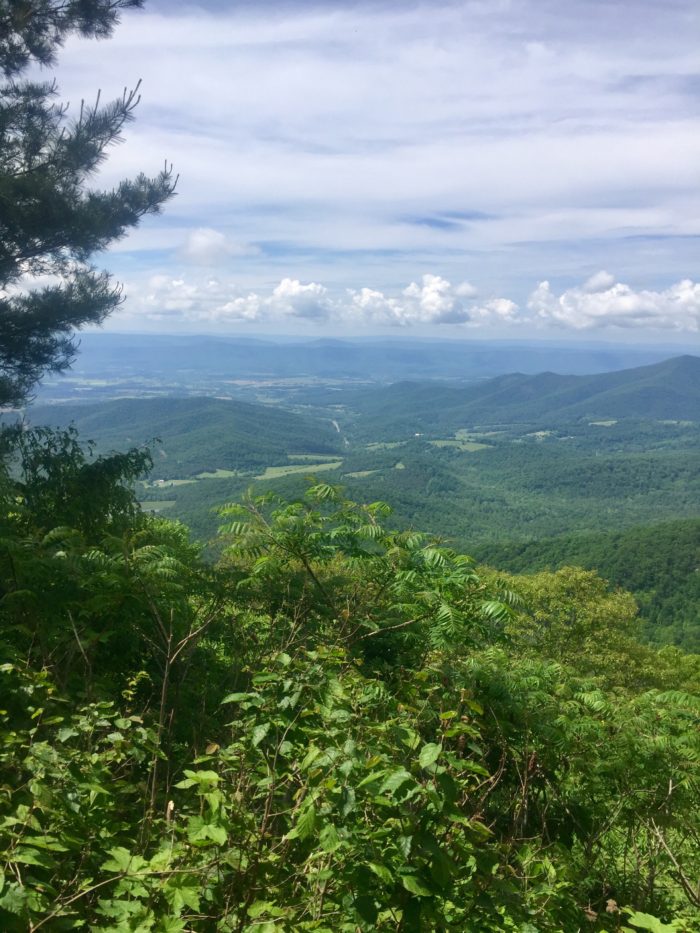 It rained hard for 12 hours straight last night. The water accumulated and eventually begin splashing up under the vestibules. I had pitched my tent a little bit higher than usual to lift the bathtub walls up a little bit but the corners still need to come up. I rigged some zip-it cord inside the tent so it would pull in and up on the corners of the bathtub walls; this reduced the splash factor. Still, everything was pretty damp when I packed it up.

I passed and chatted with several hikers on my way to Front Royal, including Sushi, who was slack packing again today and headed southbound. She is a gear junkie, so I told her about my Zpacks Duplex hacks, because I know she has a Duplex as well.

I saw a couple of bears run across the trail and several deer grazing on the foliage.

There were several interesting rock formations and cliffs along the way, but because of the rainy weather there were no views.

When I got to the road to Front Royal I had arrived almost hour and a half earlier than I had anticipated. So rather than waiting for the shuttle I stuck out my thumb and got a ride to the Quality Inn.

I quickly checked into the room and headed to the outfitters and grocery store for supplies. Of course, it started raining again and I got drenched – again.

Back at the room I did my laundry and dried out all my stuff as best I could. The young men in the room next to me had guitars with them, so I ended up jamming with those guys till almost midnight. Rose contacted me and invited me to a pizza party tomorrow night and said there might be a little jam session too. Good times. 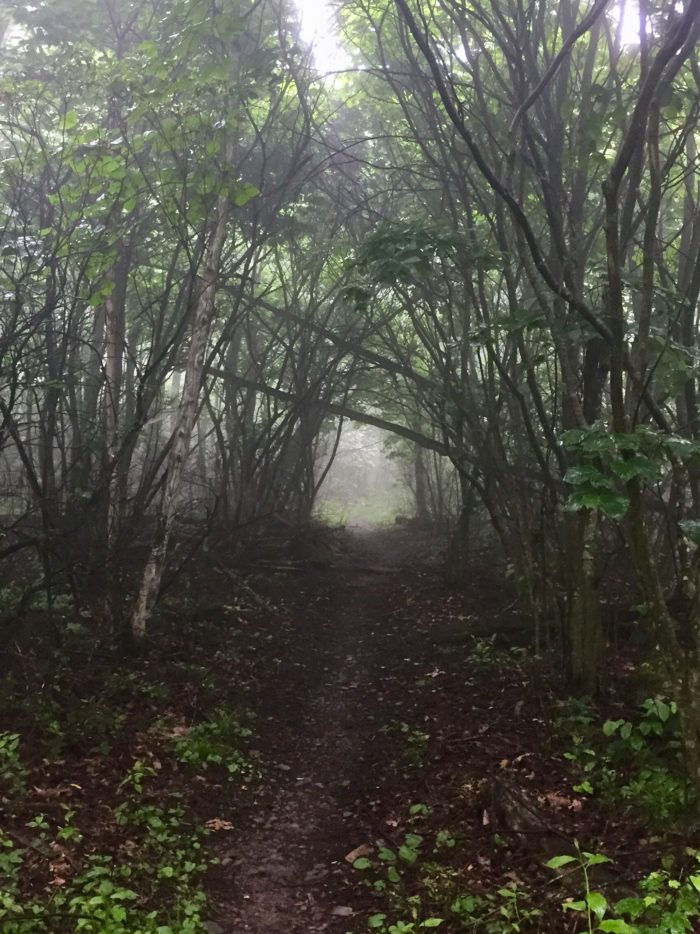 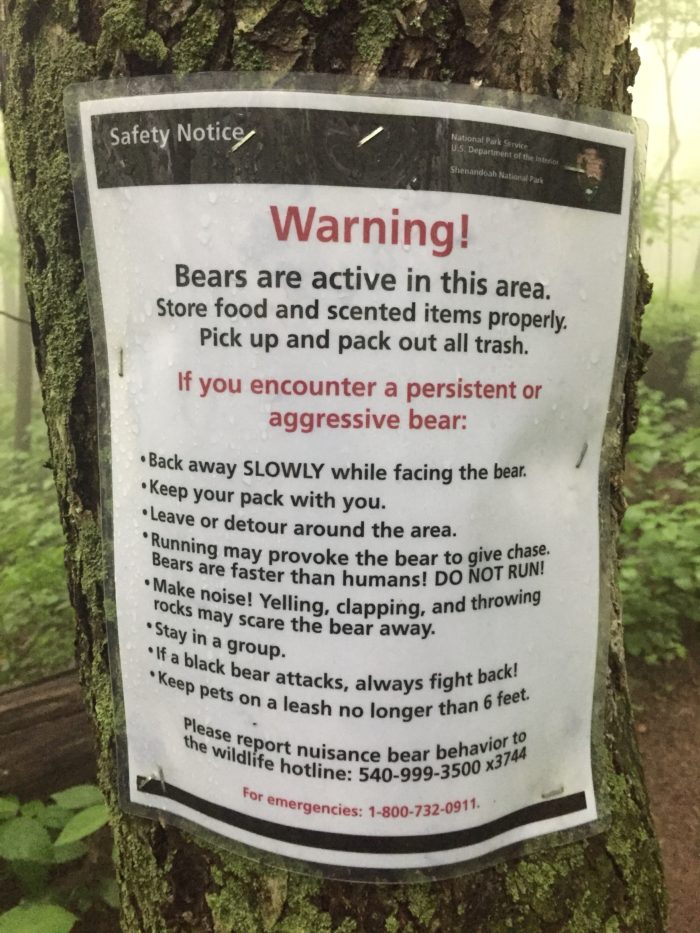 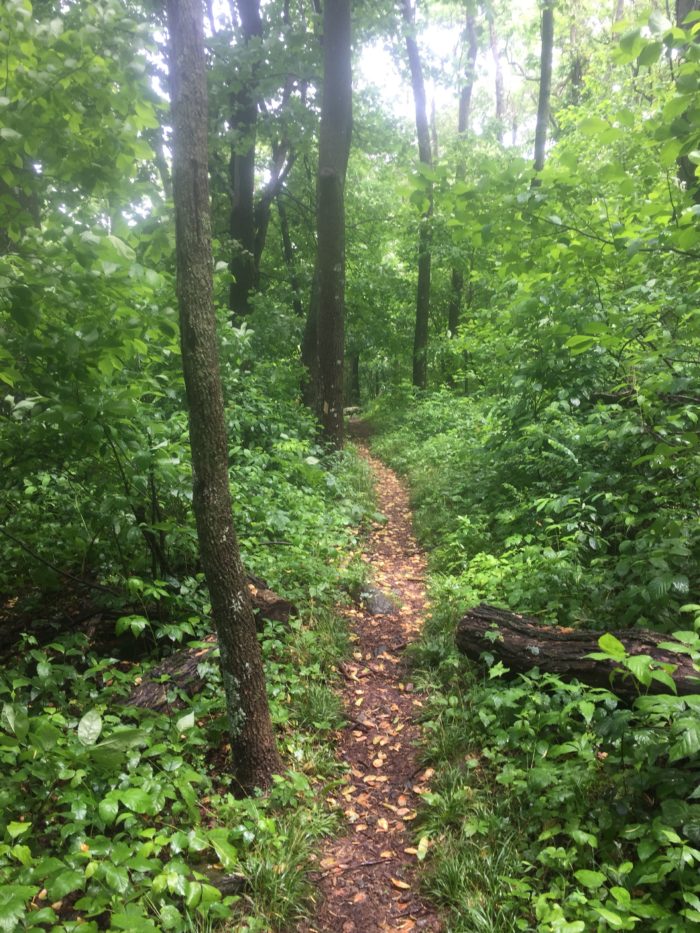