Hiking Through the Virginia Blues, and Awful Weather

Clearly, I’m not good at keeping up with blog posts.

It just takes so much time, you know? We’ve started doing longer-mile days, so we get into camp later. And then by the time you’ve set up camp and had dinner, it’s already past dark. I haven’t even been that great with journaling lately. Back when we only hiked 15 miles, we seemed to have nothing but time in the evenings.

Anyway, my last blog ends with me arriving in Damascus.

I’m currently in Harpers Ferry, so I’ve done all of Virginia. This blog will just focus on the stretch from Damascus to Pearisburg. 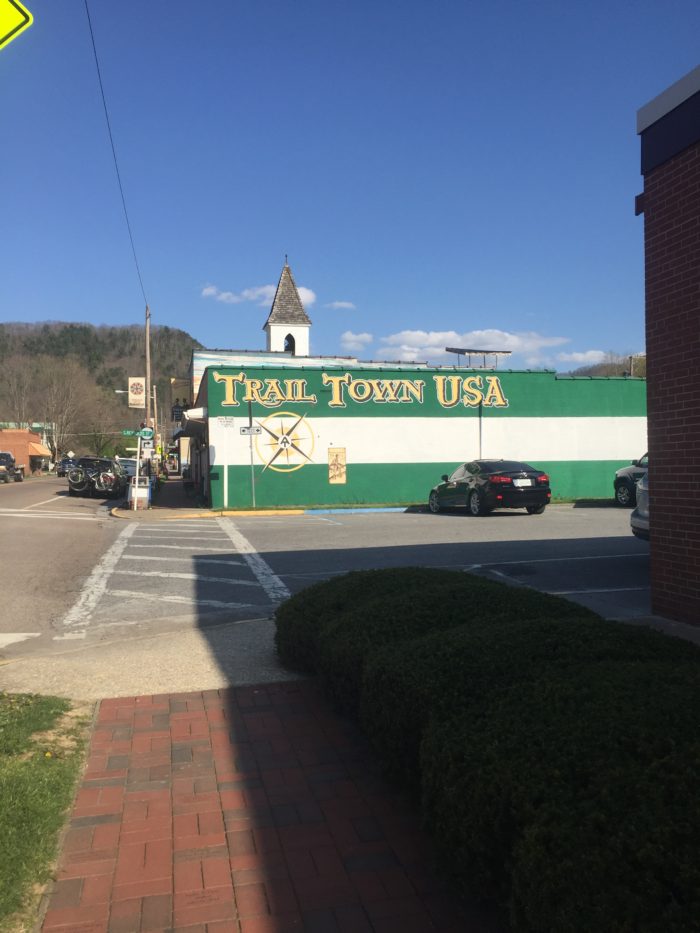 Damascus is another town that the trail goes directly through, and is the home of Trail Days.

We were so ready for a break by the time we got to Damascus.

There was some debate about whether or not we should book a bunk at a hostel in advance. Since we were getting there so early, and since there are about a dozen places to stay in Damascus, we took our chances. Our preferred hostel was, of course, full. But they did have room out back in the teepee, so that’s where we stayed. 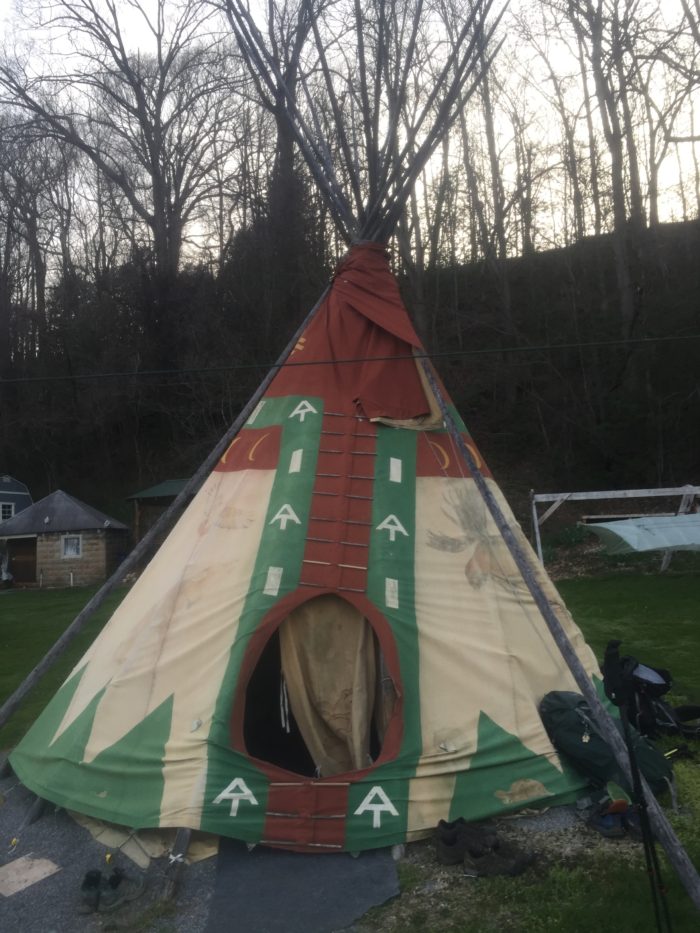 Probably the first, and last time, I’ll sleep in a teepee.

We had a great, relaxing day. There’s a Pizza Plus in town, so we ate our weight in pizza. They even made us a dessert pizza after we requested it. We resupplied, hung out and ate ice cream, and tried to work through Buck and Robin’s puzzle book since they were getting a new one in their next resupply.

The forecast called for rain, literally all day the next day, so we zeroed in Damascus as well. You could technically say we walked a mile of the trail since the trail goes through town, and we walked through town to get from one hostel to the other. (The teepee leaked). On the way we stopped at the Dollar General to load up on snacks. 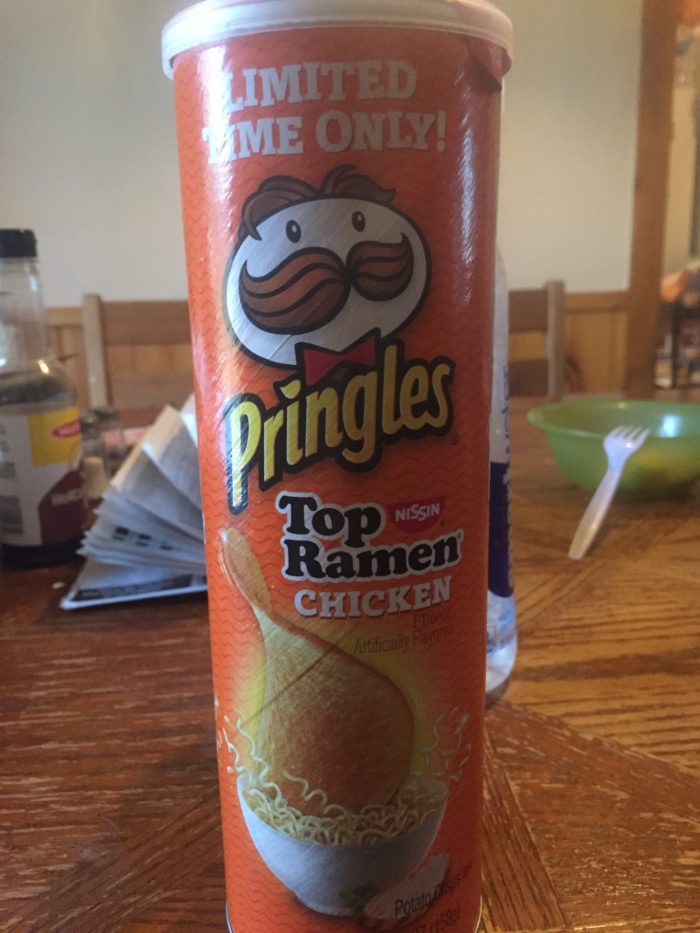 Found these at Dollar General. They taste exactly how you would expect.

It did rain literally all day, so we mostly stayed in and played cards, with one excursion to the cafe. I ordered an eclectic mix of carbs, including a smoothie, a bagel, and pie.

The rain had mostly let up, but it was still foggy and gray. The trail continues past the end of town and runs parallel to the Virginia Creeper Trail for a while, so we got a good view of this bike path from up on the side of our hill. Apparently the Creeper Trail is super popular, judging by the five or six bike rental stores Damascus is currently supporting. Since it had rained so much in the last day, there was a ton of water on the trail and we had to cross some pretty legit creeks. When we got to one, it was so deep and wide that we decide to take our shoes off and cross in Crocs. I thought we didn’t have to ford rivers until Maine, but apparently the rivers came early this year. 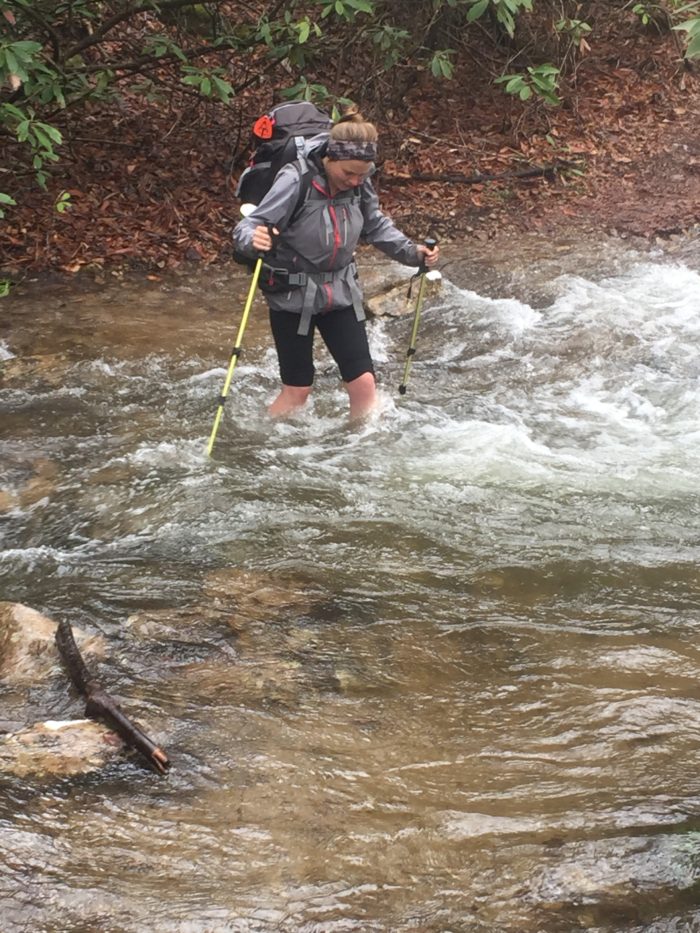 Way back in Hot Springs, I was assured that hikers don’t usually encounter snow after the Smokies, especially not in late April. I was also told that after Mt. Rogers is when you could send your winter gear home. So I tried to enjoy the irony of having it snow the night before we went over Mt. Rogers. 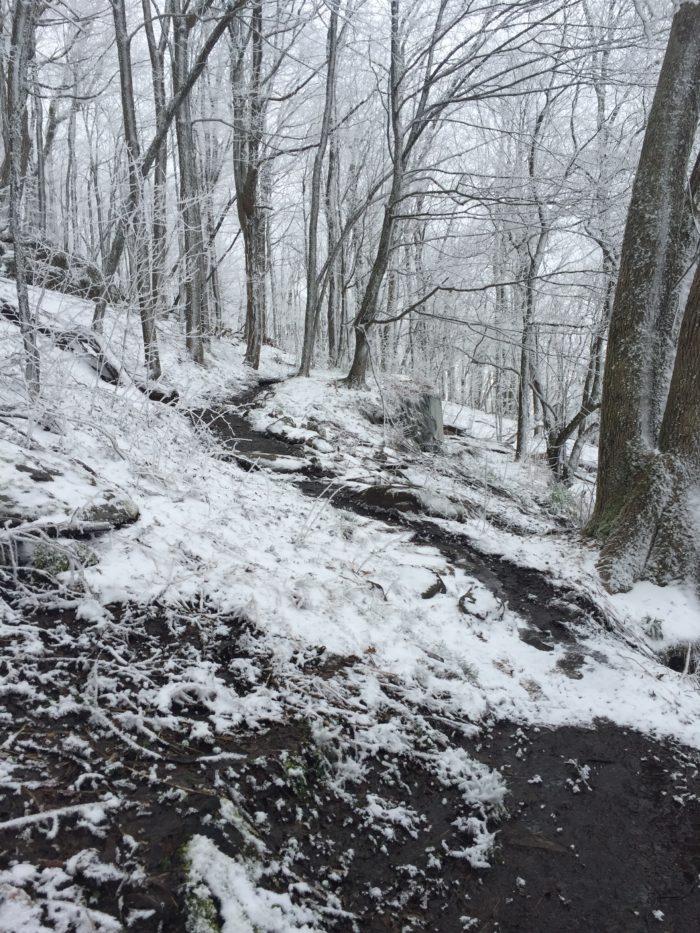 At least it’s pretty, right? There has to be something good about the snow.

Honestly, I struggled a lot with this day. I had been so excited for it. We were going to pass mile 500, and see the ponies in Grayson Highlands, both huge milestones that I had been looking forward to for ages. It was great to get there, but I just felt so worn down by the weather that it was hard to really enjoy it. It was insanely windy all day, and the ice kept blowing off the trees and raining down on everything. My feet were soaked from walking through the snow. Thank god we saw some ponies, otherwise I don’t know if I would have made it through the day. 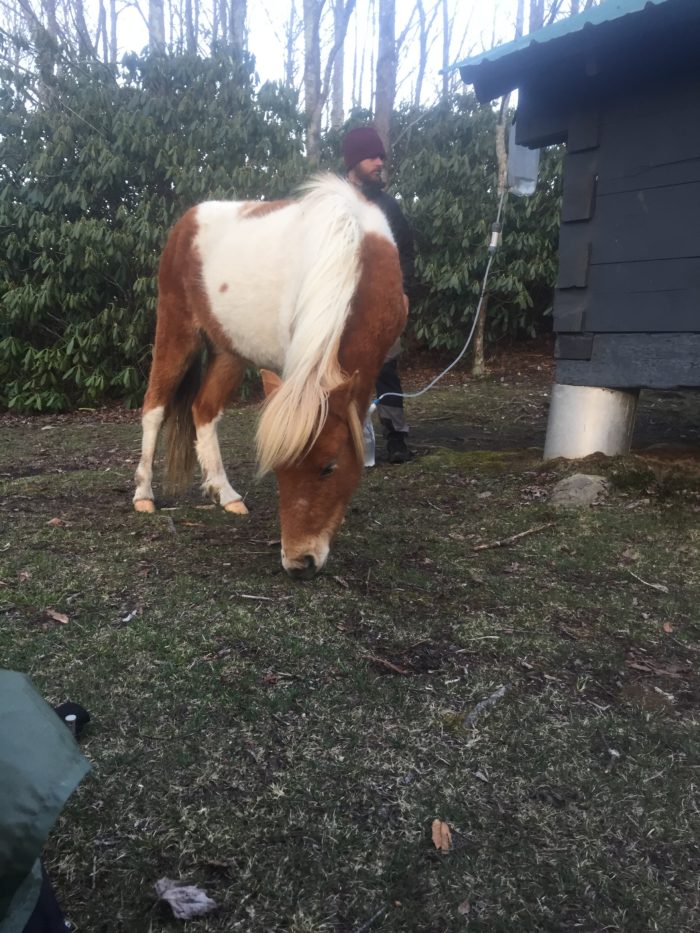 Buck is unimpressed by the ponies.

I think I probably did end up with a case of Virginia Blues for a while. After nearly two months on trail, you kind of settle into a rhythm and nothing is really that exciting anymore. It’s no longer the first or even tenth time you’ve had to set up your tent in the rain, or struggled to throw a bear line, or had the exact same conversation with day hikers who basically never ask interesting questions. It was great to finally get to Virginia, but you’re in Virginia for so long that even that stops being interesting. It’s beautiful, don’t get me wrong. Going through pastures and farms especially is a nice change. But a lot of this section really ceased to be noteworthy. 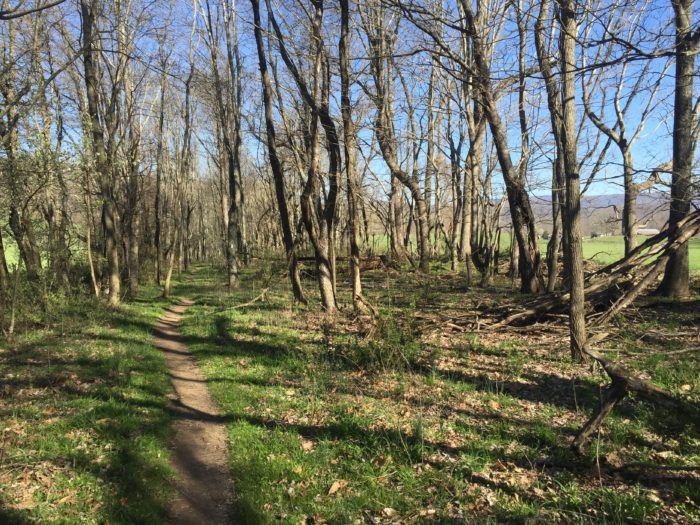 The mountains take forever to get spring. Still, slowly getting greener.

Town stops in Marion and Bland.

The town of Marion is a terrible place. I mean, it’s fine, like they have a Walmart and a shuttle from the trail to town, which is convenient. But they also have a lot of people who stop you to chat, which I hate. Buck, Robin, and I were chatted to by three separate people while eating dinner and resupplying. And it’s nice that people are curious and everything, but Jesus, sometimes I just want to eat my McDonald’s and watch Judge Judy in peace without hearing about your grandkids. I didn’t actually go into the town of Bland, but I did spend six hours at the Brushy Mountain Outpost with the tramily while we waited for Buck and Robin’s resupply boxes to get delivered. Squid Kid’s mom stopped to visit as well, so it was a great excuse not to hike in the rain. I like to think we ordered enough food to justify taking up one of their tables for that long. 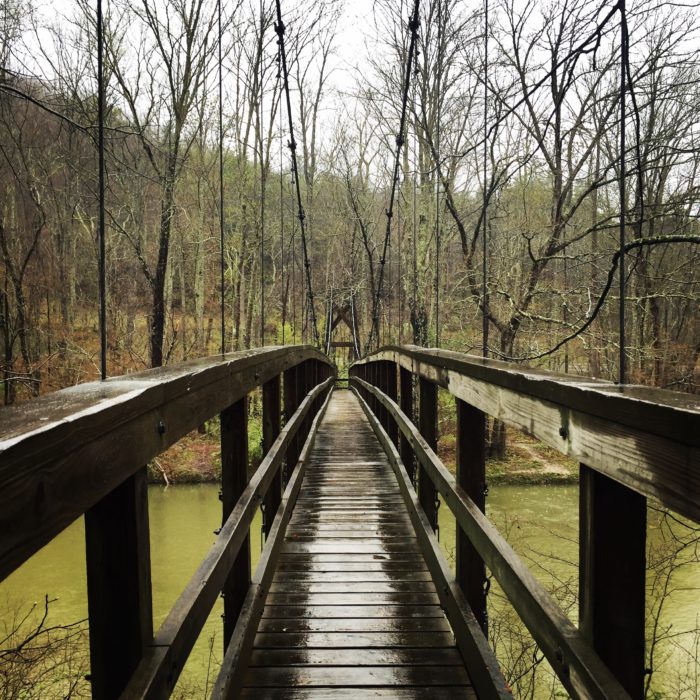 The town of Bland kicked off a five-day streak of rain as we headed to our next destination of Pearisburg. It didn’t rain constantly, so there was just enough time to get your pants or your jacket to dry before it started up again. I fell in some mud pretty early on, so I got to wear pants with mud on them for a few days. My tent got increasingly wet, which really freaks me out. It’s a single-wall tent, so if the inside is wet I can get dripped and misted on. I associate this section with a podcast I listened to about how comic books are made. We were happy to make it back into town to fully dry again.

We were super happy to make it to Pearisburg. We stayed at Angel’s Rest Hiker Haven, which was one of the best hostels I’ve seen on trail. The staff was super friendly and helpful; one woman made brownies and left them out to share, and someone else made blueberry pancakes in the morning and handed them out. Also, their bathrooms are super nice. I finally got to eat at an all-you-can-eat Chinese buffet, which was fantastic. We spent our evening how we spend most evenings in town – eating a bunch of junk food, drinking beer, and playing cards. It’s not a bad life, really.

Coming up next, hopefully – Pearisburg to Waynesboro update. Stay tuned. 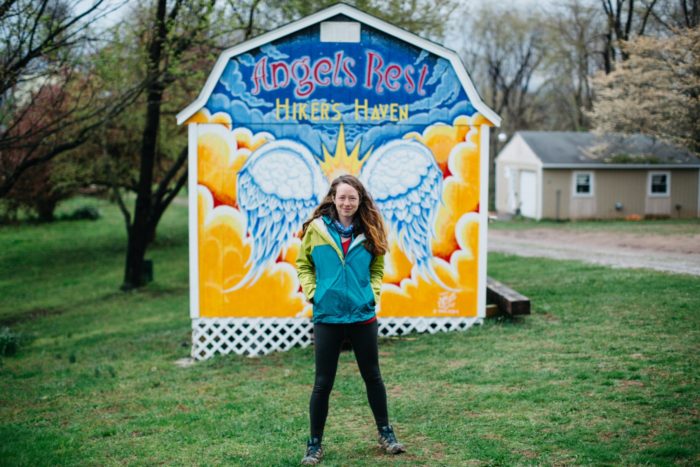