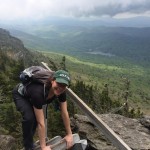 Let me introduce myself, as this is my first blog ever. My trailname is “Hindsight,” for three reasons. First, I have no peripheral vision and am therefore considered legally blind. Essentially, I go through life stumbling around and knocking over crap like a kid playing Cowboys & Indians while looking through a paper towel tube. It’s really quite charming and humorous…until someone breaks a leg (more on that later). I am also the slowest hiker in all quantum universes. When I say slow, I mean the hare, of Aesop’s fable fame, would still beat me even with all his breaks for jabbering. Thus, because of my sight, I am always behind the other hikers. Get it??

The second reason is one shared by many other hikers: I am on the trail, in part, for reflection, inspiration, and to figure everything out. I’m just not sure that the Appalachian Trail is going to be long enough for that. I pretty much suck at figuring things out. Oh look, something shiney!

The third reason, clearly the most transparent, comes from my training partner, who gets credit for giving me the name in the first place. I always hiked in front, thereby providing him mostly with views of nothing but my behiney. I never heard him complain.

I am section hiking the Appalachian Trail each July, hoping to finish at Mt. Katahdin in 2020, the year I turn 50. My sections will be in the 200-300 mile range, give or take a step or two (million). I am currently on my  second section, Rock Gap, NC to Roan Mt, TN, approx. 287 miles. Last year I hiked from the southern terminus at Springer Mountain, GA to Rock Gap, NC, precisely 106 miles. That one did not end so well…

See, what happened was…

When I say my first section didn’t end well, I can’t decide if it’s an understatement or an absurdity. I broke my leg. And when I say broke, I mean I blowed it up real good. Hearing one’s own tibia and fibula snap while in mid-air is a sensory experience no human should have. It made me wish I had gone deaf instead of blind.

The worst part, outside of the excruciating pain, surgery, and inability to walk for six months, was the realization that the injury occurred because I was stupid. It did not happen because I was running from a bear, or hurdling, a rattlesnake, or scrambling through a treacherous boulder minefield. It did not even have anything to do with my limited vision. Nope. It happened because of my dang mp3 player.

While going down an easy, flat, obstacle-free section of trail (yes, there is one), I began fumbling in my pocket for my audio player. The trail was right there under my foot, I swear…until it wasn’t. It crumbled, leaving nothing but air. Air is not a particularly stable surface for a 125lb woman (do not tell anyone how much I weigh; that’s private) hauling a 35lb strap-on. I fell inward toward the trail and my left leg snapped like a chicken bone. Actually two chicken bones. I screamed, not from the pain (okay, maybe a little from the pain) but because I heard my heart break in that instant too. All three before I ever hit the ground. I knew in that moment it was over. Of course, that did not keep me from telling myself ridiculous stuff like “sit here for a minute, it’ll be ok,” and “just rub some dirt on it”, despite the fact that I could see both bones protruding under the skin in opposite directions.

The 911 operator was real nice.

As I lay on the embankment, awaiting EMS, and trying to remember how far back that rattlesnake had been, my training partner kept me occupied via an intense phone discussion on who was the best Beatle. I had no memory of this until he mentioned it after my surgery to which my response was “OMG, if I said ‘Ringo’ it was totally the pain talking.” “You said ‘George'” he replied. Whew. Got it right.

Then I heard Macon County (NC) EMS coming up the mountain. They sounded like the Seven Dwarfs whistling away the work week. Then they came around the bend. Ladies, listen to me. They. Do. Exist. The firemen from the calendar are real! Maybe it was the adrenalin, but I swear Mr. January through Mr. October had come to rescue me. And here I am not having showered in 5 days. Fabulous.

They hoisted me into a basket and carried me down the mountain. My insight came then when I realized that the most dangerous mindtrap on the trail is complacency. You are most at risk when it’s easy-going, because that’s when the inattentiveness sets in.

My foresight also came while the firemen were carrying me out of there like Cleopatra: This right here is the way to do the Appalachian Trail. 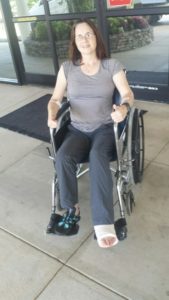 Stay tuned for more blogs about my current AT adventures.

I am a mostly blind, banjo-playing college professor.....suffice it to say that I have never been one of the "cool" kids. But that's ok, because I am freakin' hilarious. I live in Campobello, SC with three dumbass bulldogs who can't hike to the end of the driveway, and one brilliant border collie who will hike, but only after she finishes Sudoku and the NY Times Sunday crossword puzzle.