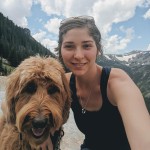 Home Is Where the Dog Is

I hope this blog post serves two purposes: 1) I can fully answer one of my most frequently asked questions; 2) I can unabashedly post adorable pictures of my dog like a Facebook mom who forgot not everyone had a rush of oxytocin to their brain upon first meeting her chubby-cheeked, pug-nosed poop pusher. (For the record, babies are fine. I like babies. I am not a monster.) 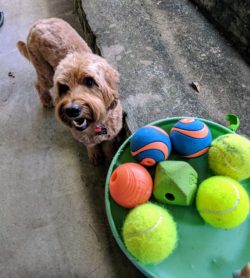 Let me introduce you to Pepper (alias Pep Pep, Pee Paw, Ole Pee Paw or just P). Her hobbies include belly rubs, shaking for food, chewing bones, and being uncontrollably excited when someone rings the doorbell. My husband adopted her about a year before we met. I definitely thought that owning a goldendoodle was some sort of ploy for getting dates with dog-loving women. He always denied that as his motive, but regardless it worked like a charm. From the first day I met Pepper, she became my dog.  Most likely because I was the Bringer of Walks, which in the realm of Dog makes me the second god, after Person Holding Hamburger. 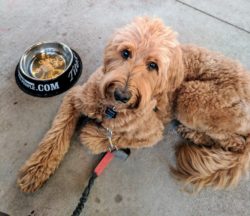 Pep is about 60 pounds of muscle. She loves hiking and wearing her little doggy backpack, and can definitely outhike me any day. She is a little personality plus, always bringing smiles and woo-woos to people. I think her trail name would be Wookie because she kind of looks like one and when she’s excited, that is the sound she makes. Unfortunately, as wonderful as she is, there is no way on this earth I would take her on the Appalachian Trail with me.

You know how they say that dogs tend to take on the personality of their owner? Remember how Pep Pep was my husband’s doggy? Yeah, I’m not throwing my husband under the bus here, but he is dead, so he really doesn’t get a say anymore. (That’s a widow joke. There will be more. You’ve been warned.) Ergo, my sweet, sweet Pep is a domestic princess.

As good as she is out on the trail, when she is done hiking, she has some expectations (demands). She expects to have the dirt washed off her paws, be shown to the area with air conditioning or heat, then asked to do nothing for the next two days. She refuses to eat outside (she makes exceptions for hamburgers). I kid you not, when I was trying to teach her to heel, I finally gave up because when she is outside, treats do not matter. Not even the fancy treats that have actual ingredients. When we were traveling around the country last year, she lost about ten pounds because she would not eat unless she was indoors. Finally, Princess Pepper requires a bed, couch, or luxury dog mattress. I have seen her deign to lay in the grass about five times. I took her camping once and she about lost her mind. There was nowhere for her to lay down. I even tried a Therm-a-Rest sleep pad. Nope, hard pass. 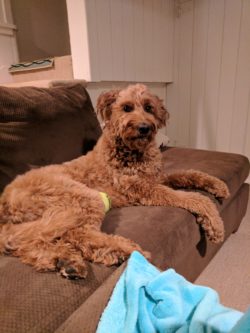 Finally, I have to think about other hikers. You see, Pep does have this one liiiiiittle issue. She doesn’t bark. “Oh! Perfect!” you say to yourself. Oh, nay, nay, dear reader. She does one worse — she whines. 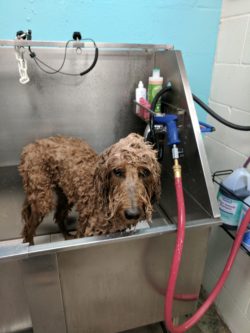 If she is even a little bit uncomfortable, everyone in camp will know about it because she will go in a circle from one person to another, give them the saddest dog stare you’ve ever seen (see exhibit A), then produce a sound akin to a neglected baby. It’s been honed to perfectly tug at your heartstrings while simultaneously making you want to jump out of your skin.

If we were in a town and I wanted to, I don’t know, eat, do laundry, go to the grocery or post office, the terrible sound would go up two octaves and about 40 decibels as she experiences the truest heartbreak from the knowledge that I will definitely never return to her, or worse, that I will have a hamburger in her absence. 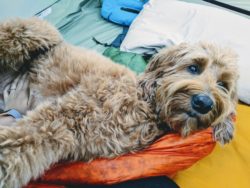 I joke, but the reality is that I want to make to to Katahdin. If Peps were on my hike with me, my inner dialogue would consist mostly of my fears for her safety instead of self-reflection and peaceful intentions. In the end, it is the decision most right for the both of us, but you better believe my end-of-trail fantasies will be equally split between kissing the Northern Terminus sign and falling to my knees to greet my fluffy baby upon my return home. 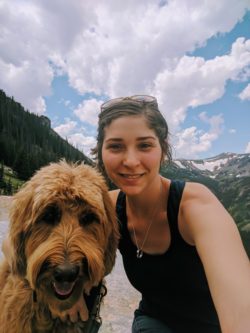 PS. The deep, dark well that is my brain came up with a very fascinating idea a few weeks ago. I am going to be a flip-flopper, but a really weird one. Tune in next time as I explain. 🙂

Hey there! I'm Laura, a southern lady living in the beautiful PNW. I'm a lover of sunrises, medicinal herbs, poetry, gummy worms, and lofty run-on sentences. After being tossed around by life for a little bit, I've decided to take a reboot by hiking the Appalachian Trail in 2018. If you come along on this journey with me, you will be privy to my insights into the characters found on the trail, the constancy of my cold, cold feet, and a widow's sense of humor. As I like to say, feel free to hang out with me as I explore life after it all falls apart.