Like so many blockbuster movie franchises lately, my final installment will be broken into two parts. Unlike those franchises, doing it this way will not make me any money. Darn. Anyway, this first part will be a regular update, and I’ll have the second part, a reflection on the entire experience, coming in a few days.

After the Halloween blizzard, I was really on edge. Miraculously, I had great weather in the Smokies, and it wasn’t until after I got out of the Smokies that the temperatures dropped. Once the temperatures dropped to single digits at night, I was constantly worried about the weather. Once I hit Robbinsville, NC, I decided to take a different approach—avoid camping as much as possible and jump from hostel to hostel. I had the appropriate gear to sleep in those cold temperatures, but my morale suffered when I had to be out in the cold for days on end. I ended up staying at Cabin in the Woods for two nights. I had Donna, the owner, pick me up at Fontana Dam, and then I slept at Cabin in the Woods the first night. That night, Donna took me into Robbinsville to resupply, and  I had the loft all to myself and watched TV for a few hours and ate treats. The next day, I slackpacked from Fontana Dam to Stecoah Gap, went back to Cabin in the Woods, and spent the night again eating treats and watching TV. What a morale boost. Donna even invited me to have dinner with her, so we ate spaghetti while watching Project Runway. The next morning, Donna made me breakfast just out of the goodness of her heart, and I set out to hike through Nantahala. 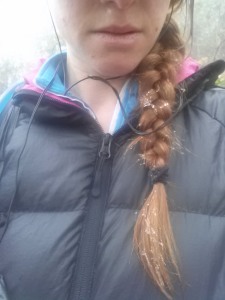 It looks like water, but that’s actually ice in my hair.

When I hiked down to the Nantahala Outdoor Center the next day, a group of three guys about my age were hanging out in the parking lot and offered to cook me some Indian food on their portable cooking thingy (I call it a portable cooking thingy because it wasn’t your average stove—it was a drawer that pulled out of their van like one of those drawers you see in morgues on crime dramas on TV). They were on a kayaking trip. KAYAKING. In sub-zero temperatures. I looked at them like they were crazy, let me tell you, but they were very nice fellows, and I hung out with them for a while before I had to head to the shelter for the night.

I don’t remember what night it was, but at some point, I stayed at the Rock Gap Shelter, and I was all alone there, so I decided I’d set up my tent in the shelter because there were not really any flat spots to set up my tent, and I wanted to keep the mice from climbing all over me. So I set up my tent, but to no avail, because before I knew it, a very audacious mouse rolled up acting like the killer rabbit from Monty Python and the Holy Grail. It was ALL up in my business. It was running all over the outside of my tent, and then when I tried to gather my belongings from the picnic table, it jumped up on the table and started trying to climb all over every little thing I had. I finally moved my tent out of the shelter, onto the only flat spot I could find: the trail to the privy. The mouse did not bother me anymore. 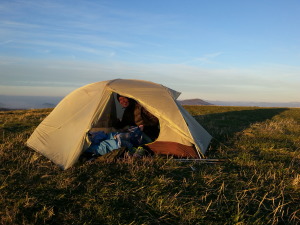 Some day hikers at Max Patch insisted on taking a picture of me inside my tent.

I decided to pass up Franklin, NC, so I could get home faster, but the day after I passed it up, I ran into a couple of thru hikers named Zest and Mosey. Both of them are older guys who are elementary school teachers, and Zest had just retired. They mentioned they were getting a ride into Franklin that night, and said if I didn’t want to sleep out in the cold, I could share their ride and go into town. I’m no fool, so I took them up on their offer. We ended up taking a zero day in town to wait out the last rainy day of the hike, because why not. Earlier in the hike, I would have hiked through the rain, but now I had less than a week left, and this was the only rainy day in sight. Why make myself miserable? We had a beautiful zero day and then our ride, a spirited and very kind lady named Beverly, took us back to the trail. We hiked to Top of Georgia Hostel. The next night, we got a ride into Helen, Georgia, and stayed at a really nice Best Western and ate at a restaurant with amazing wings. I think it was called Big Daddy’s. I highly recommend it, and I highly recommend Helen, Georgia, a cute town with Bavarian architecture that only got a cursory mention in the AWOL guide. The next night we stayed at the hostel at Neels Gap. See the pattern here? We were avoiding camping like the plague. 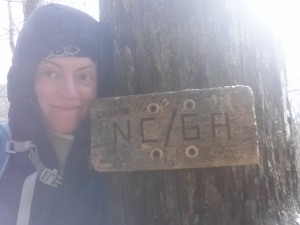 Crossing the last state line of my hike

The last week, the only night we camped was the night before we hiked Springer Mountain. Let me tell you, it did wonders for my morale. It also really helped me to be hiking with those two guys—they helped me stay chipper. After we finished on Saturday, Mosey’s son, who lives in Atlanta, picked us up and drove us to Atlanta. We then had a celebratory dinner at the Cheesecake Factory, and because my debit card had broken in half a couple of weeks earlier, I had a pocket full of cash to blow. I ordered avocado egg rolls, Louisiana chicken pasta, and pumpkin pecan cheesecake. After the meal, I came back from the restroom to find Mosey had picked up the entire check. If I had known that he was going to pay for everything, I would have given him more of the avocado eggrolls. Hindsight is 20/20.  I had bought a plane ticket for Sunday morning, so I slept at Mosey’s son’s apartment in Atlanta with everyone else, and then we all went out for breakfast Sunday morning. Mosey’s twin brother picked up the check. Man, I didn’t pay for a single meal while I was in Atlanta. I have been really impressed by the kindness of strangers throughout my AT experience—I have found myself receiving so many rides or meals from people I had just met. In fact, so many day and weekend hikers I met on the trail just bent over backwards to be friendly to me—so many people asked if I had enough food and offered me candy, granola bars, or meals. For the past year and a half, friends, family, and even strangers have voiced concerns about me running into people on the trail who would want to harm me, but I can now report I experienced nothing but kindness from the people I met. 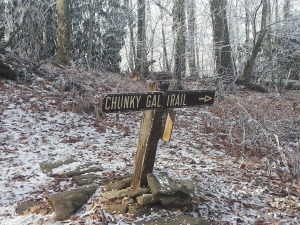 Things are getting chilly around here.

If you want to read more about whether or not people’s concerns about my hike were justified and what I hope people will take away from my hike, read the second part of this post, coming in a few days. Until then, thanks for reading! I would also like to thank everyone who supported me on this challenging journey. Thanks to God, who supported me the whole way; to my parents, who sent me winter gear and all kinds of other things along the way; to Camille, who sent me homemade cookies in a Pringles can and other treats; to Jarom, who gave me moral support and orange candy; to my mom’s friend Liz, who sent me random ten dollar bills, to the two NOBOs who gave me a high five when I got to New Hampshire, and to everyone who encouraged me on Facebook and through text messages (I’m talking to you, Rebecca H.J.). Thanks to everyone who believed I could do this. Oh, and thanks to all the naysayers who told me I wouldn’t finish or that hiking the AT alone was a stupid idea—your lack of faith was a great motivator. Haters gonna hate.