This is kind of a scary post for me to write because I have received some flak from various trolls on some of my blog posts, and since this one involves some pretty personal opinions and feelings, there’s potential for some troll hate. What I’m about to say is very important to me, and it involves how the trail has changed my life. I want to start by publicly revealing my Appalachian Trials lists. In the book Appalachian Trials, author Zach suggests writing three lists before beginning a thru hike: (1) why I am hiking, (2) what I hope to get out of my hike, and (3) what will happen if I fail (a paraphrase). The third one is not really relevant to this post because I didn’t fail. Also, keep in mind I wrote these in January 2013, so a lot of the concerns listed no longer apply to my life in this particular moment. Here are my first two lists:

I am hiking the AT because:

When I successfully thru-hike the Appalachian Trail, I will

As you can see, some of these are very personal. But I’m sharing them because hiking the trail made me braver. I really think the trail helped me achieve almost everything on these lists. I am more confident in myself and in God, and I have been shown time and time again that people are kind. 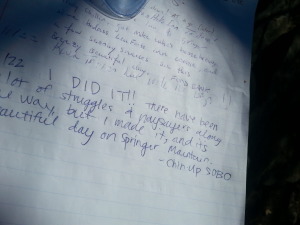 For the past year and a half, all kinds of people in my life have voiced concern about me hiking the trail alone. One girl even went so far as to say to me, “You can’t. That’s stupid.” I know a lot of people who read my blog would identify more with these people than with me. They subscribe to the very common attitude that women should not hike alone because they will get attacked or because the wilderness is scary. I want to talk about that attitude. But first, I want to introduce you to the lie many thru hikers are telling.

Before I began my hike, I received a piece of safety advice. I found this piece of advice on many different hiking web sites. It is this: if you are hiking alone and you run into someone else on the trail, don’t tell them you are hiking alone. In fact, lie to them. So I did. While it’s true that I did meet many people on the trail and often would hike with new friends for a while, I hiked most of the trail alone. Inevitably, when I ran into other people, they would give me a judgmental look and say some variation of, “Are you all alone?” to which I replied, “No, I’m hiking with a guy and a girl.” No matter where I was or how long it had been since I had seen another hiker, I told this lie. And you know what? Every time I told it, it felt like my insides were twisting around in a circle. Why? Because I hate that anyone should have to lie about being alone for safety, and because I hate the judgmental tone in people’s voices as they ask whether I’m alone. Some women would even tell me, “Well, good, I’m glad you’re not alone, because you should NOT be alone. Be careful.” Sometimes their tone was sincere, and other times it was biting, as if they were saying, “You’re betraying all of us women by being out here alone. If I can’t do it, you shouldn’t do it, either.” I hate the lie.

After a while, when people voiced their concern about me being alone, I began to ask them why. The sociologist in me wanted to understand the phenomenon of people shying away from walking in the woods alone. When I asked, people would say things like, “Well, aren’t you afraid?” and I would ask, “Afraid of what?” and they would say things like, “Well, you could be attacked,” or “bears” or “animals,” or my personal favorite, “weirdos.” People would start up conversations with me by asking, “Have you met any weirdos out here?” or “Have you had any scary experiences?” I know this is a common attitude, but at the risk of offending anyone, I must say I don’t get it at all. Why would a “weirdo,” a term I assume means some sort of mentally ill person who wants to hurt random strangers for no reason, wander 15 miles into the woods to harm a random stranger? Now here’s the thing: it does happen. I know it happens. But it’s so rare, it’s almost negligible. There have been something like 30 violent crimes on the AT in the past 40 or so years, and 3 million people hike the trail each year. I like those odds. The truth is you’re safer on the trail than in a big city.

While hiking, I met two old men at the Wapiti shelter who told me about the double murder that happened there in 1981. A man and a woman were killed by a man who went to prison for 15 years, got out of prison, and then tried to shoot two boys who were camping together, but they got away. After telling me this story, one of the old men said to me, “It’s a mad world to be hiking alone.” But the man and the woman weren’t alone, and neither were the two boys. So the two old men didn’t seem to me any less likely to become victims than I did. But what really bothered me about this experience is that these men were telling me that because of one incident that happened over thirty years ago, I shouldn’t be hiking. I have come to understand that a lot of people will tell each other that they shouldn’t do something because of something horrible that happened once, a long time ago. They are afraid, and when they tell someone else to be afraid, it works. Well, I want to say that what we say to each other matters. While I was hiking, I almost never felt unsafe. The scariest event of my hike was when I had to go over Unaka Mountain in a blizzard the day after Halloween. However, when a woman in Shenandoah said to me, “You should not be alone out here,” I felt scared. Why? Because I listened to her.

Now, please understand that I’m not suggesting we throw caution to the wind and try to be moving targets out in the woods. What I am saying is that living in fear is not living. I’m also saying hiking the Appalachian Trail convinced me that people are kind, and that even the unkind people are very unlikely to randomly hurt complete strangers. I know this sounds naïve. I know. But it saddens me how many people told me if I couldn’t find someone to hike the Appalachian Trail with me, I shouldn’t go at all. What a way to live your life: to sit on the sidelines and forgo important opportunities for personal growth because someone told you to be afraid of a very small chance of danger. I’m reminded of the movie The Croods (arguably Nick Cage’s best film, come on), in which the main characters, a family of cave people, tell each other they must never leave the cave, only to find at the end of the film that there is a great, big, beautiful world out there they have been missing out on. In The Village, a similar theme is explored, as a society of people decide to build their own community, secluded from the rest of the world, in order to avoid the pain of life. I have always loved movies that explore this theme that it’s worth it to face the prospect of pain, challenge, and harm in order to achieve growth and learning. That’s an idea that is really important to me, and I believe in it.

I want to share one more media moment that I have thought a lot about as I have completed my thru hike. In the book Wild, Cheryl Strayed tells a story about a time during her hike on the PCT when a man, a complete stranger, offered to take her to his family home for a hot shower and a meal. When she climbed into his truck, he said something like, “You know what really helps me unwind after a hard day?” and Cheryl started to worry this man was going to violate her sexually. Just when she was getting nervous, he pulled out a bag of licorice and said, “You like Twizzlers?” This anecdote really stuck with me because so many people told me I should be afraid of other humans on my hike, but whenever I met other humans, they showed me nothing but kindness. “Do you have enough food? I have some M&Ms you can have!” “Here, have some gummi bears!” “Do you need any dinners? We have extra from our weekend hike!” “Do you need a ride somewhere?” “Oh, you don’t have a jacket? Here, take my daughter’s. She has moved away from home and doesn’t need it anymore.” 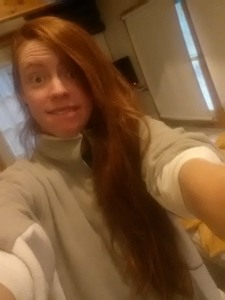 Someone I had just barely met gave me her daughter’s fleece jacket.

What we say to each other matters. Fear snowballs. When one person is afraid and they tell me I should be afraid, I listen. But I want bravery to snowball. I want to tell people to be brave, and I want them to listen. I want to live in a world where my future daughters can walk alone in the woods without having to be afraid—a world where people will tell them, “It’s okay to hike alone,” and they’ll be right. As cheesy and trite as it sounds, I want to help change the world. And I want to start by saying to everyone who reads this, you are brave, strong, and capable enough to do things alone. I hiked 2,185 miles alone in the woods, and you can do scary things all by yourself, too. I feel like so many of my friends have things they have always wanted to do, but they say things like, “Maybe when I get married…” or “I just wish I had someone to go with me.” Be brave. Be smart and be careful, but be brave and be capable. That’s the most important lesson I learned on my thru hike: I can. 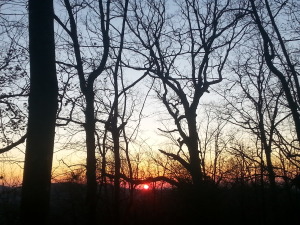 Last sunrise of my hike.