It’s going really well! Happy to have reached Virginia, feels like a real milestone. When I started the trail, I secretly felt like I would be on a plane back to Montana within a week, hopping along on crutches with my knee in some sort of orthopedic brace. But now we’re closing in on 500 miles and feeling physically strong and blessed with good fortune. We’re staying at Hikers Inn in Damascus and it’s so clean and friendly. Damascus is adorable, but I will NOT be back for Trail Days. Too. Many. People. 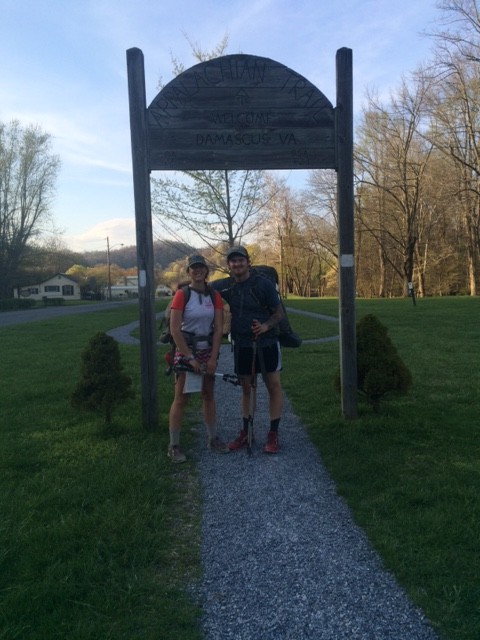 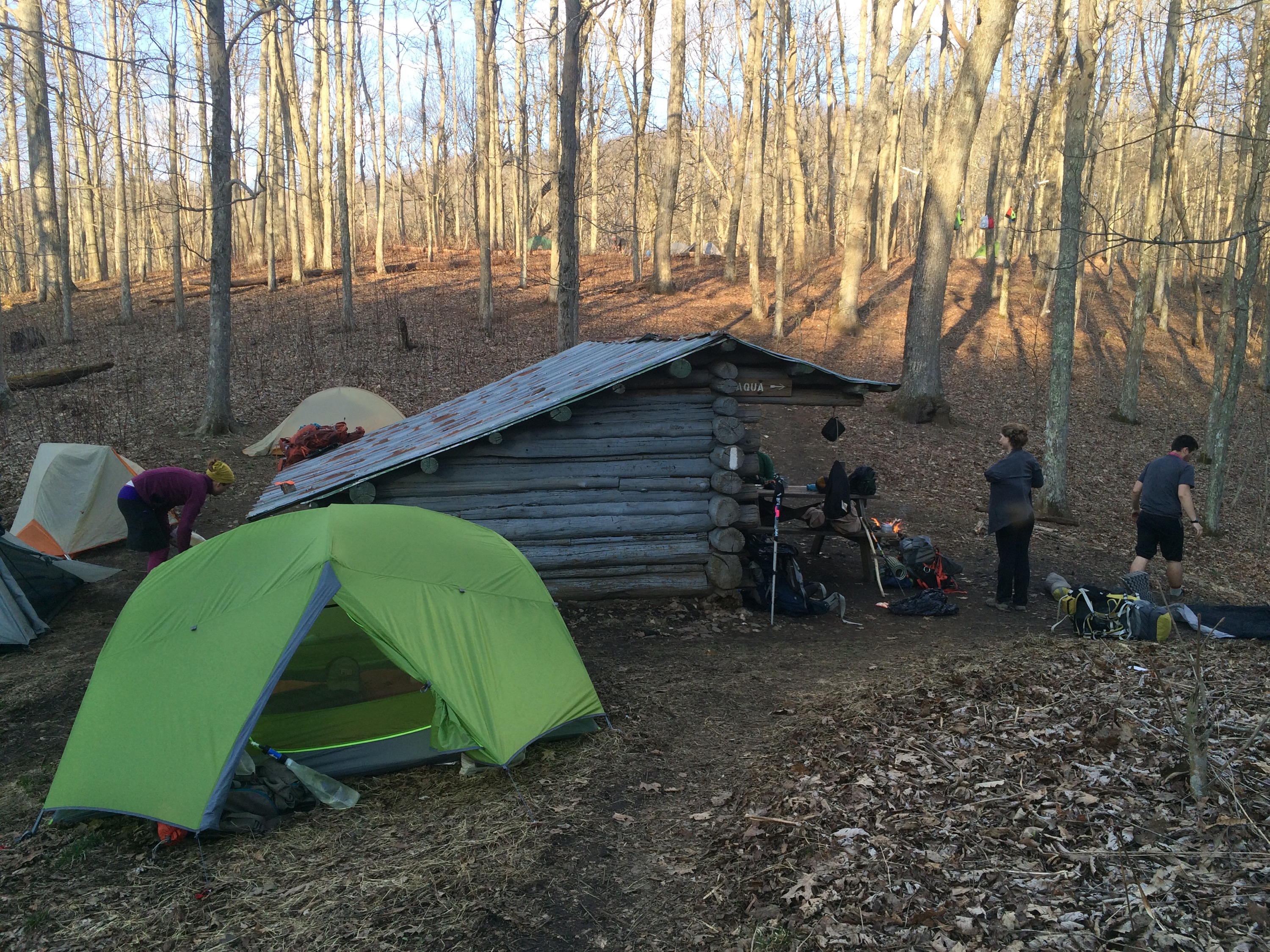 My lower legs no longer feel like they’re being run through a wood chipper, which is great. But Hare’s feet still hurt pretty badly at the end of every day, and my lower back started acting up earlier this week. We were in Tennessee on a long climb to Pond Flats, and every step was shooting pain through my back and down my legs. I couldn’t handle it, so I flung my pack down and started crying. Hare was SO nice, as usual. He’s the best, most supportive hiking partner I could ever ask for. He even ended up taking about 7 pounds from me, which I feel really guilty about, but it’s probably the only reason I got to Virginia without crippling myself. 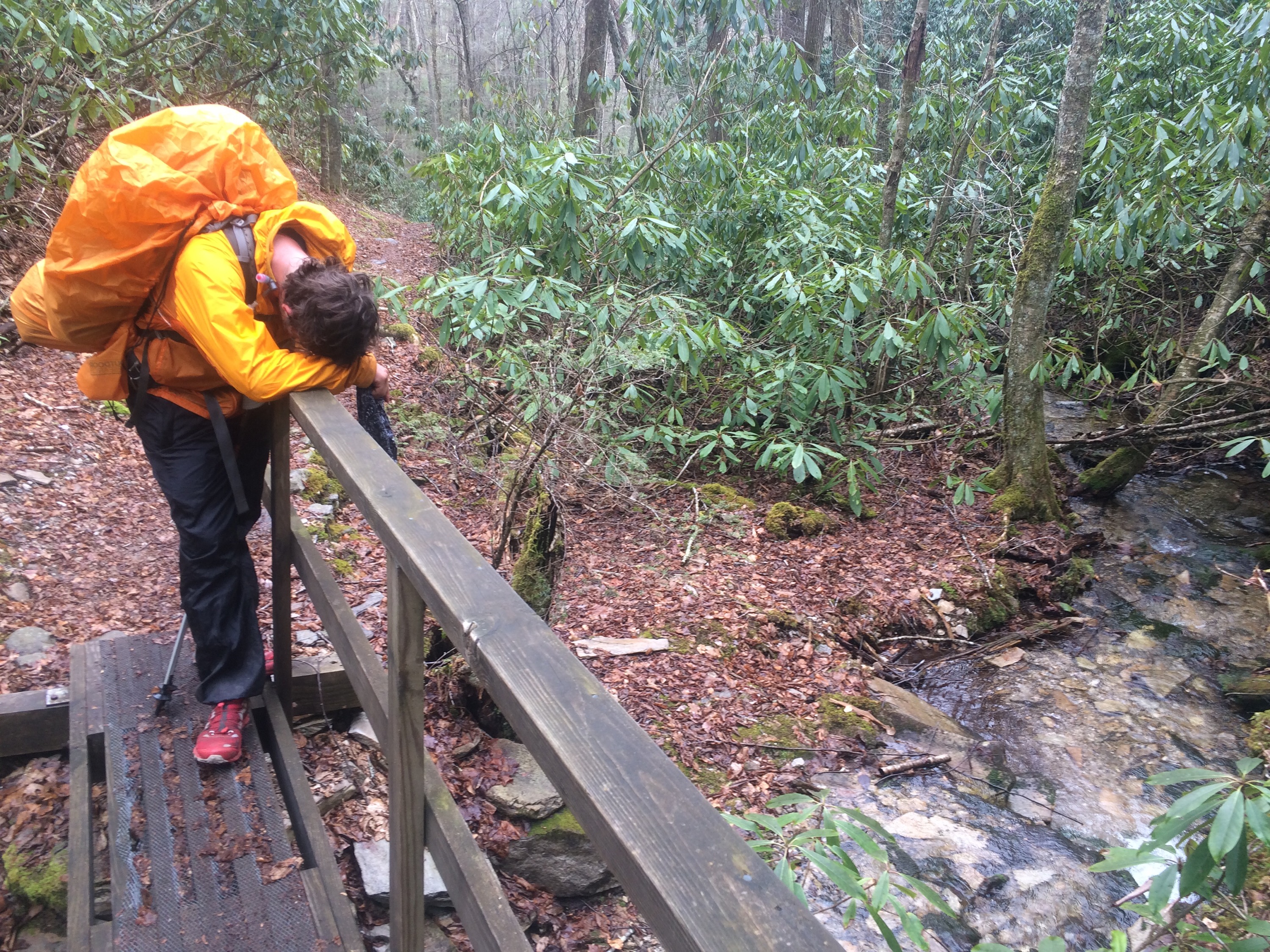 I know I’ve been carrying too much weight. A group of us weighed our packs last week, and out the group of guys, my pack was among the heaviest. I don’t have anything unnecessary anymore (my Kindle is a necessity ok?) but my gear itself is heavy. Going to look for a lighter pack today that won’t dig into my back so badly.

Erwin, TN was our next resupply after Hot Springs. Going to WalMart was an exercise in sanity. It was terrible and people were mean. But me, Hare, and Spartacus bought stuff to bring back into the woods for Easter dinner, which was great! Ham, potatoes, cookies, rolls, and butter! 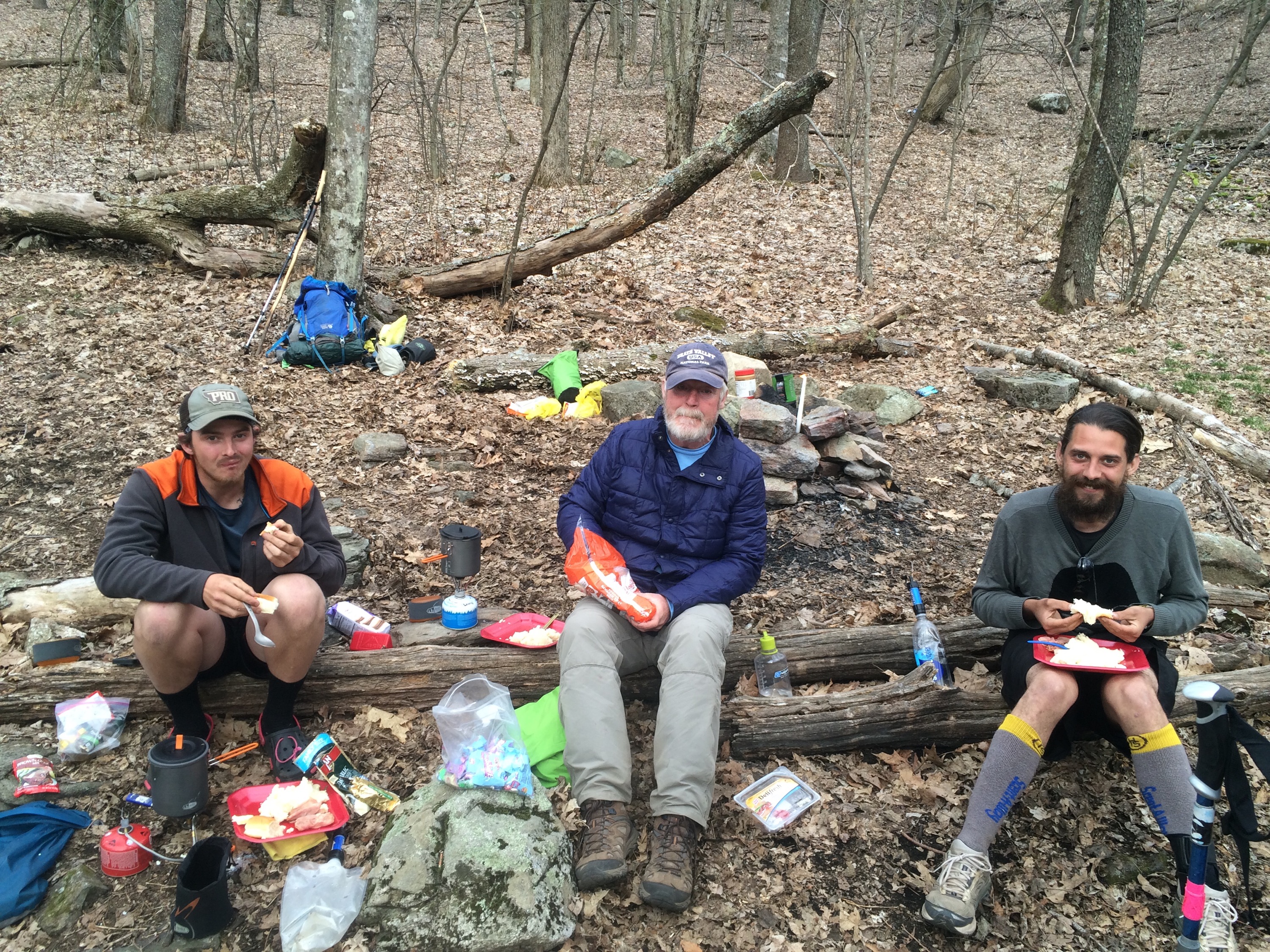 We stayed at Uncle Johnnys, his hostel is right off the trail and he shuttles to town a few times a day. I got exciting new shorts ($3 XL kids WalMart special) and somehow Hare wound up proudly sporting lady’s short shorts and a tiger shirt. That’s what happens when you let hikers loose in WalMart. 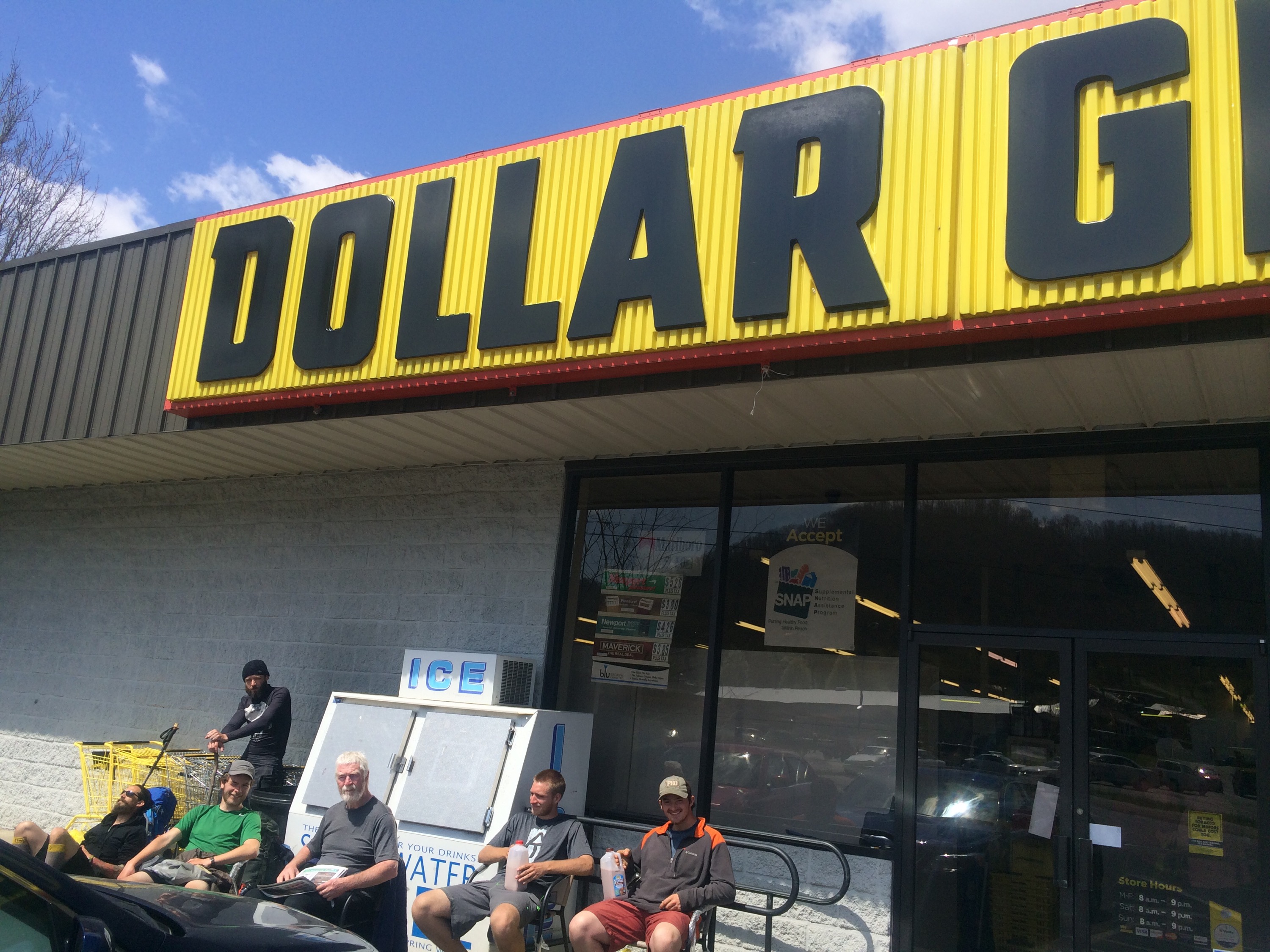 The weather the last few days has been glorious, but the past several hundred miles have seen a lot of rain. Torrential rain. Oh, and my favorite: thunder and lightning. Just f*cking kidding I HATE lightning. We were doing 16 miles the day we hiked over Roan Mountain, and we got to Overmountain Shelter before, after a pretty late start. Thunderstorms will do that–I became Speed Tortoise: Fueled by terror. 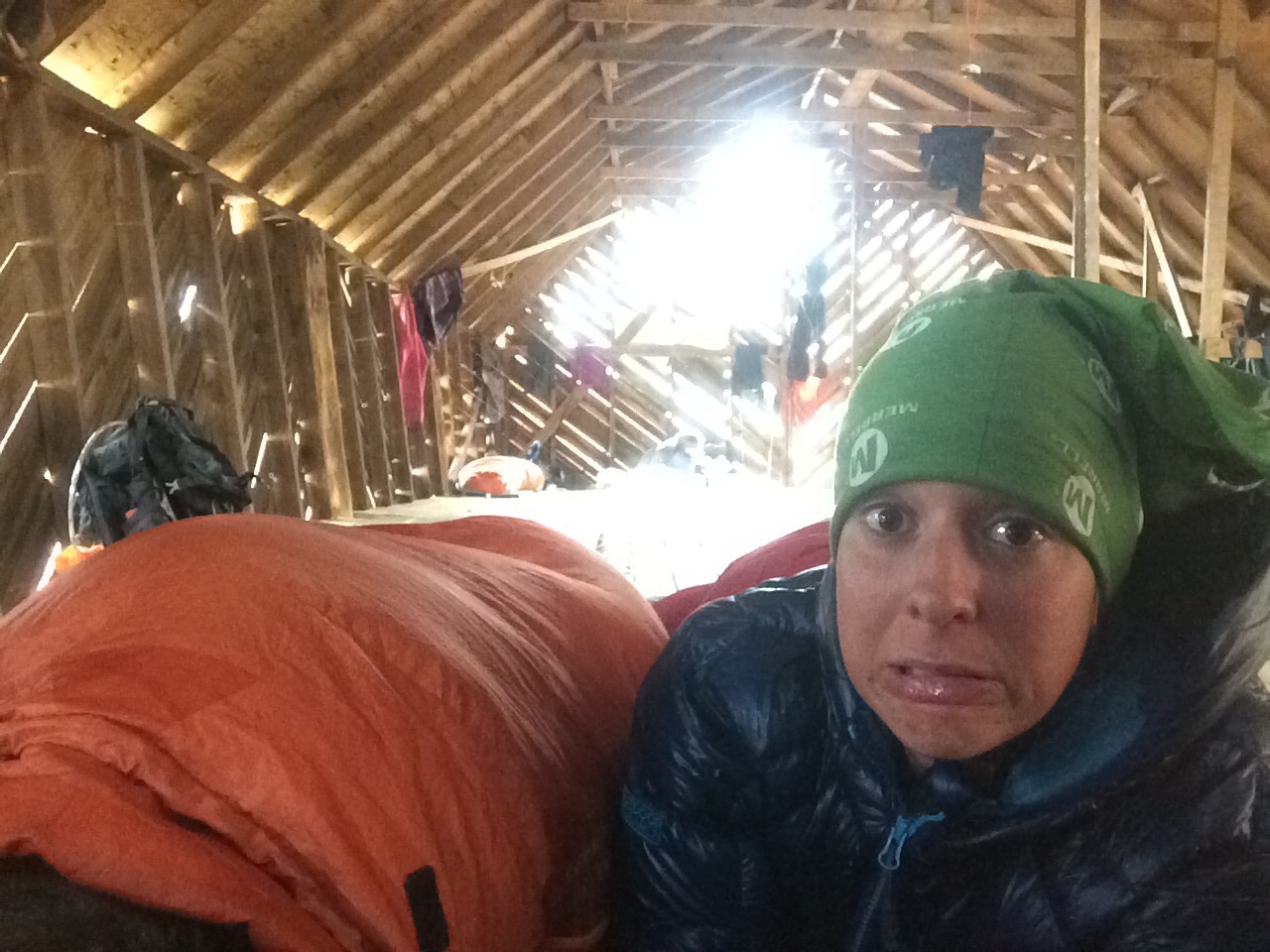 It had rained all morning, but we were moving really fast so I didn’t get cold.

When we started heading up the balds in the Roan Highlands, the sky basically exploded. I’ve heard the Roan Highlands are a lovely place, but I have never been so scared on the trail. Or maybe anywhere. The lightning was cracking directly overhead, and we couldn’t see 20 yards ahead because of rain and fog, so I couldn’t tell how much higher we were climbing without cover. I know the chances of being struck by lightning are like one in a gazillion, but what about the idiot lurching across an exposed high point, through the ankle-deep water of a flooded trail, clutching metal poles? Do their odds go up?

Huge relief to get to Overmountain Shelter (giant barn shelter), and I loved staying there. Hare was trying to drop weight so he had sent his camp clothes home from Erwin and had no dry clothes. Result: him walking around in a jacket and underwear. Why do I feel like he doesn’t care

The next morning was lovely and we felt strong. We resupplied in Roan Mountain, Tennessee and it was crappy. Had to hitchhike from Mountain Harbor Hostel into town, and it is not a hiker-friendly town. I couldn’t believe how hard it was go get a ride, then I remembered my lovely fiancé was wearing women’s shortass running shorts, rubber clogs, a cutoff tiger shirt, and sporting a full-sleeve tattoo. Future NOBOs: If you’re planning to resupply in Roan between Erwin and Damascus, I recommend just sending a food drop to Mountain Harbor. It’s a great hostel right off the trail (they have goats and horses!) and you won’t have to bruise your ego trying to get into town. Or just wear normal clothes and you might get a ride. Either way.

I had felt super strong from Erwin to Roan, but the first three days out of Roan I crapped out. Most of our group was just dragging ass. It got hot and muggy, which we weren’t used to, and I think we all got dehydrated. We did a few 18s in a row, the first one was full of lightning and terrifying, the second one put us right in the middle of a bear closure area, so we had to hike another few miles on the road to get to a “safe spot.” Morale was low. We set up camp on the first flat spot… a patch of grass by the side of the road next to a radio tower.

Yesterday was so different though, Hare and I both came back to life. We planned for 16 miles yesterday and 10 to Damascus today, but we got to the 16-mile spot and figured we could go a little further. We decided to hike for exactly two more hours, and stop at 5:45. Well exactly at 5:45, we came to the Tenn/VA state line, with a sign saying 3.5 to Damascus. So we pretty much flew to Damascus from there, got to town at 6:45 and had pizza. Yesterday I was Speed Tortoise: Fueled by imminent pizza. We did the 26 miles in 10 hours, including a one-hour lunch/water filtering break. I wish I had a different name than Tortoise, because I’m not so tortoisey anymore but oh well.

Ok Internet, I’ll answer a few questions then bounce. Once again, this post is hella long and I’m hungry

Q) Did you have to schedule your Smokies hike shelter-to-shelter and reserve shelter space per night?

A) Nope! We had to buy a $20pp permit online, we printed ours at the NOC. Weekend hikers are supposed to reserve spots at the shelters, and everyone has to stay in shelters unless they’re full. So in theory, if we were set up and the shelter was full, and a person came in who reserved a spot, they have the right to ask us to move. That never happened though, everyone was very kind and gracious.

Q) Do you wish you’d trained?

A) Ehhhhh I don’t know. I think it would have made the first two weeks easier, and might reduce the chance of overuse injury for some people. We knew we were out of shape though, so we took it slow, took Neros (a day when you plan low miles into a town), and listened to our bodies. People might disagree with me, but unless you walk up mountains for 6-10 hours a day with a full pack, it’s hard to train for this. I’ve seen people who trained for a year drop out, and off-the-couch hikers kicking butt. Some people who started with us after seriously training though? They’re probably in NH by now. I think it totally depends on the person, but we’ve got our trail legs now and overall we feel really good.

Q) What do you see as the girl/guy ratio on the trail?

A) I’ve heard rumors of women out here… I see their notes in shelters logs and I see their posts on this site. Not in my bubble though. I’ll go four days without seeing another female thru-hiker. My bubble is a charming mix of middle-age men and guys in their 20s. (Cheers to Prime, Stretch, Shadow, and Spartacus!) I get along with them splendidly, and subsequently feel awkward (what a surprise) when I see girls in town. In my experience, it’s easily a 10:1 ratio guys to girls. The trail has thinned out a lot so we see the same people every day or two. And that includes approximately zero girls.

A) Yeah, lots. Bigger tent, which keeps our stuff dry and prevents us from elbowing each other in the face. We both got NeoAir mattresses which save space and weight, but I miss my other inflatable Thermarest. The NeoAir slides around a lot, and it’s too puffy for me. But it rolls up to the size of a Nalgene so I’ll take it. Another addition was an attachment for Sawyer filters that lets you splice your hydration bladder hose and filter water without taking the bladder out/ unpacking your whole bag. I don’t remember what it’s called but it’s the best! We also started a Bounce Box with clothes we may want again, extra food, extra charger cords, nail clippers, spare Ziplocks etc. It’s working out great!

Ok that’s all for now. Speed Tortoise and Hare out. 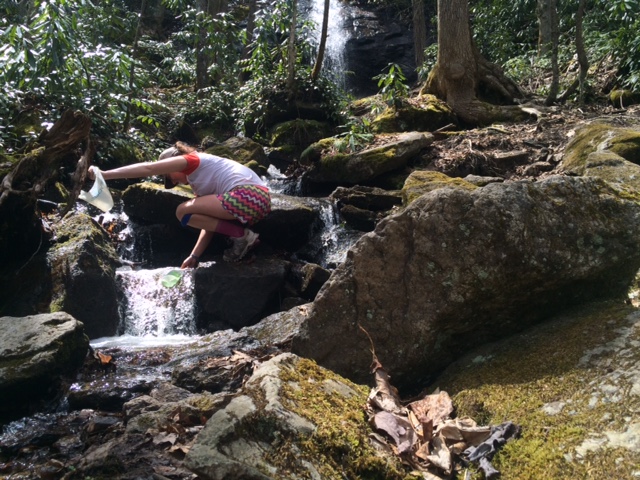 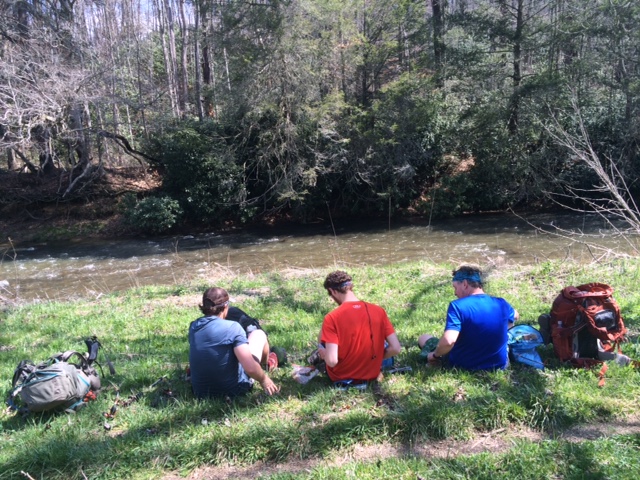