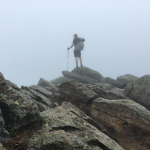 I’m not in the Southern Appalachians anymore, which means my blogposts are waaaay behind. I’ve discovered that blogging is the last thing on my mind each night, but I’ll be making an effort to catch up!

The trail leaving Hot Springs was uphill, as with most towns. After visiting the Dollar General, my food bag was full of peanut butter, gummy worms, and Pop-Tarts. I basically had all the food groups covered. Hiker hunger, an intense appetite experienced by thru-hikers, was just beginning. Pistol and I were still together and we met three more hikers averaging the same 20-30 miles per day pace, Candyman and Dan and Monica, who had yet to receive trail names. The day after leaving town we summited Bald Mountain, a grassy peak with a spectacular view to rival the one on Max Patch. The following day we made it to Erwin, TN, by early afternoon. Pistol and I went straight to the grocery store where we bought dinner, ice cream, and all the essentials for the next stretch of trail. Pistol hiked on that evening but I stayed the night at Uncle Johnny’s, a hostel near the trail. Wi-Fi and a hot shower were too tempting to resist. I hiked alone the next few days but was never lonely. The day after leaving Erwin I happened upon trail magic twice. One was lemonade and homemade banana bread. The other snacks and a cold beer. Both were from very kind gentlemen who also gave me their time and conversation. The next day I was finally given a trail name, Odysseus. The name comes from the character in Homer’s Odyssey, who, like me with my tight summer break timeline, was also “on a mission to get home.” The name fits, as it turns out, because like Odysseus, I’ve been known to wander off trail and get slightly lost. 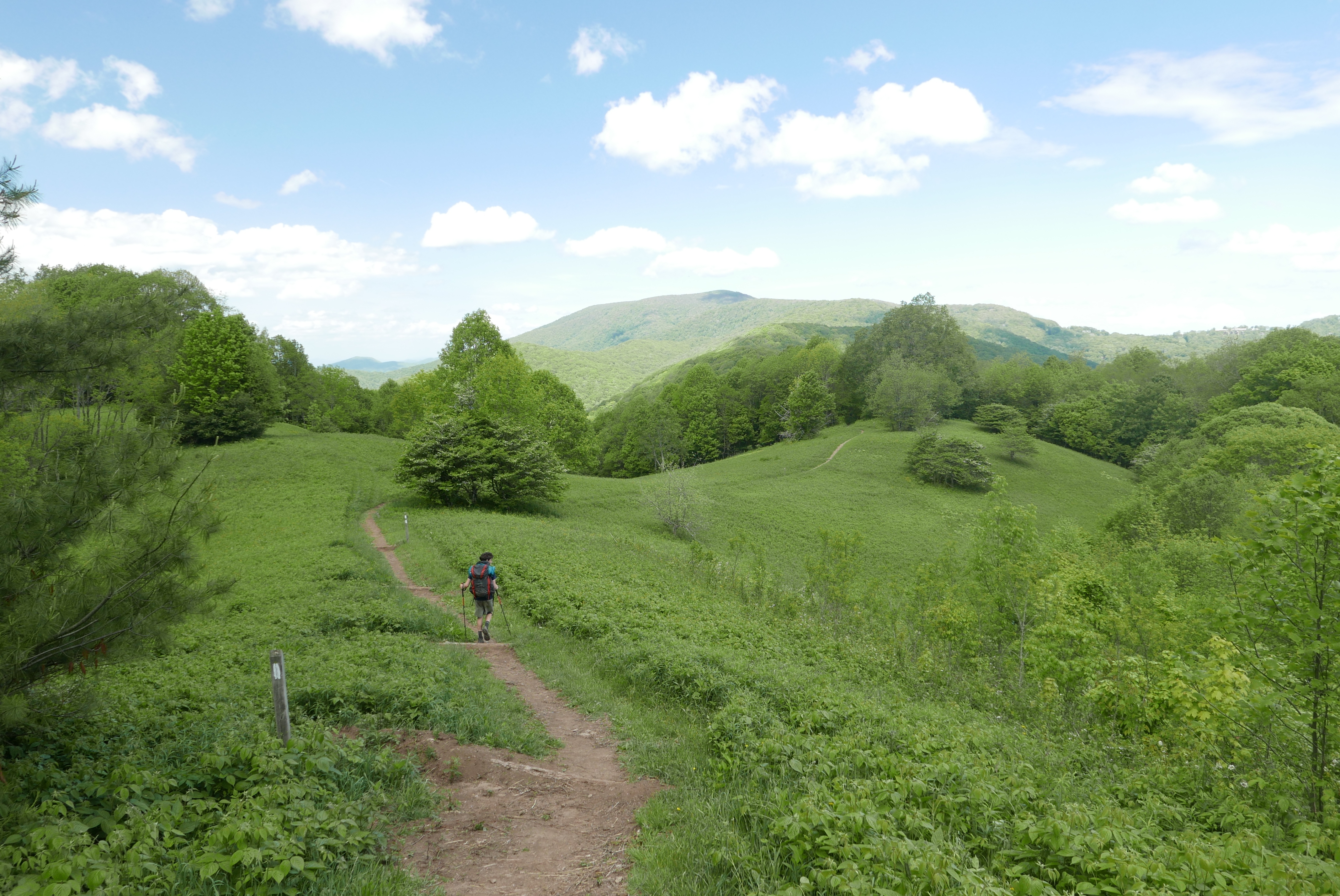 I had visited the Roan Highlands area briefly once before during a trip to Tennessee. Knowing of their beauty, I had been looking forward to reaching them ever since setting off from Georgia. My memory did not prove me wrong. The thin ribbon of trail passing over exposed balds offers a wonderful sight and is a magical place. I planned out my day so that I would pass through the Roan Highlands and start the next morning near Mountain Harbor, a B&B with a famous hiker breakfast. There were too many dishes to name them all, but it was one of the best breakfasts ever and I got as many helpings as I could. The day’s hike after that glorious meal featured three nice waterfalls. The next two days took me across the TN/VA border and into the town of Damascus. 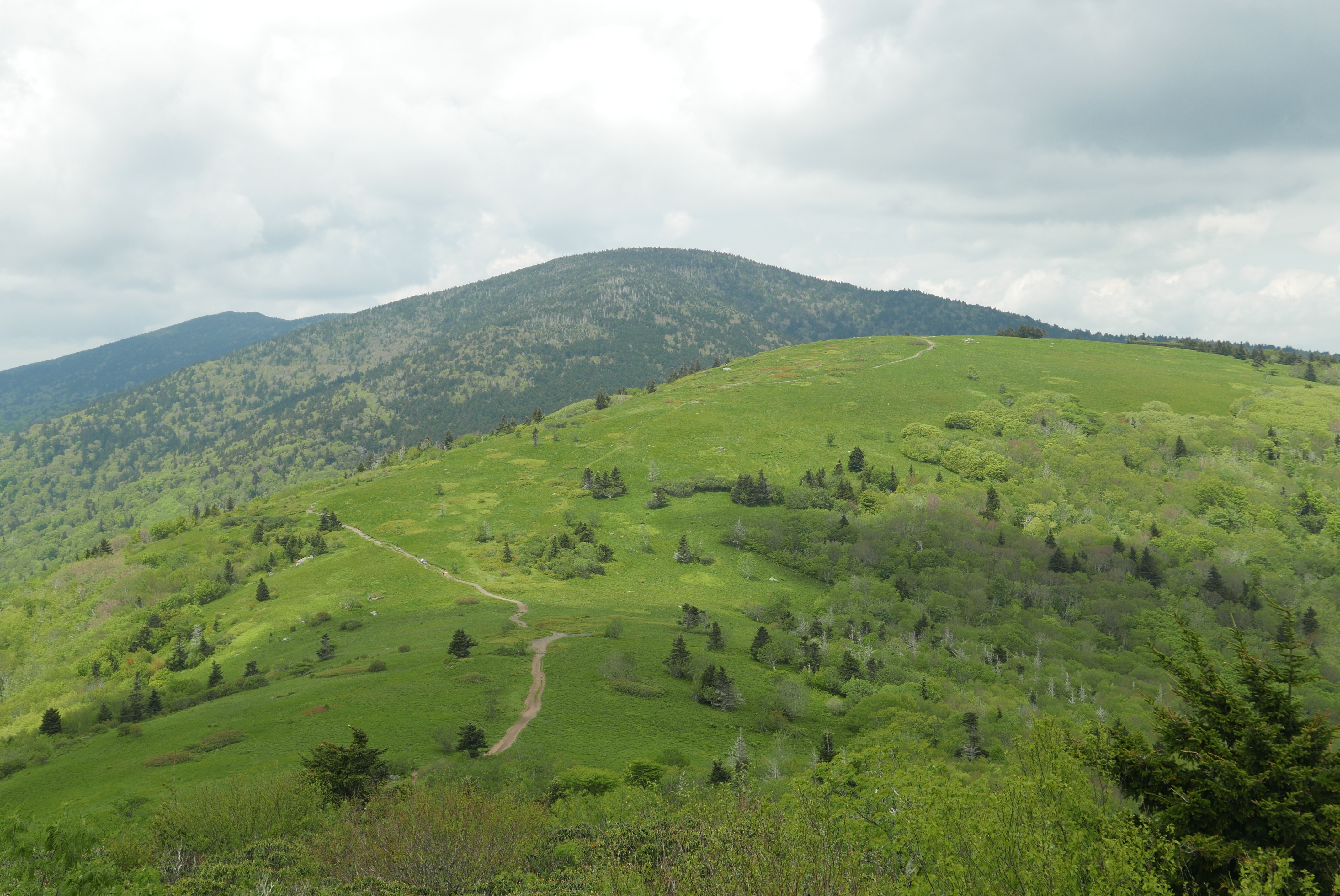 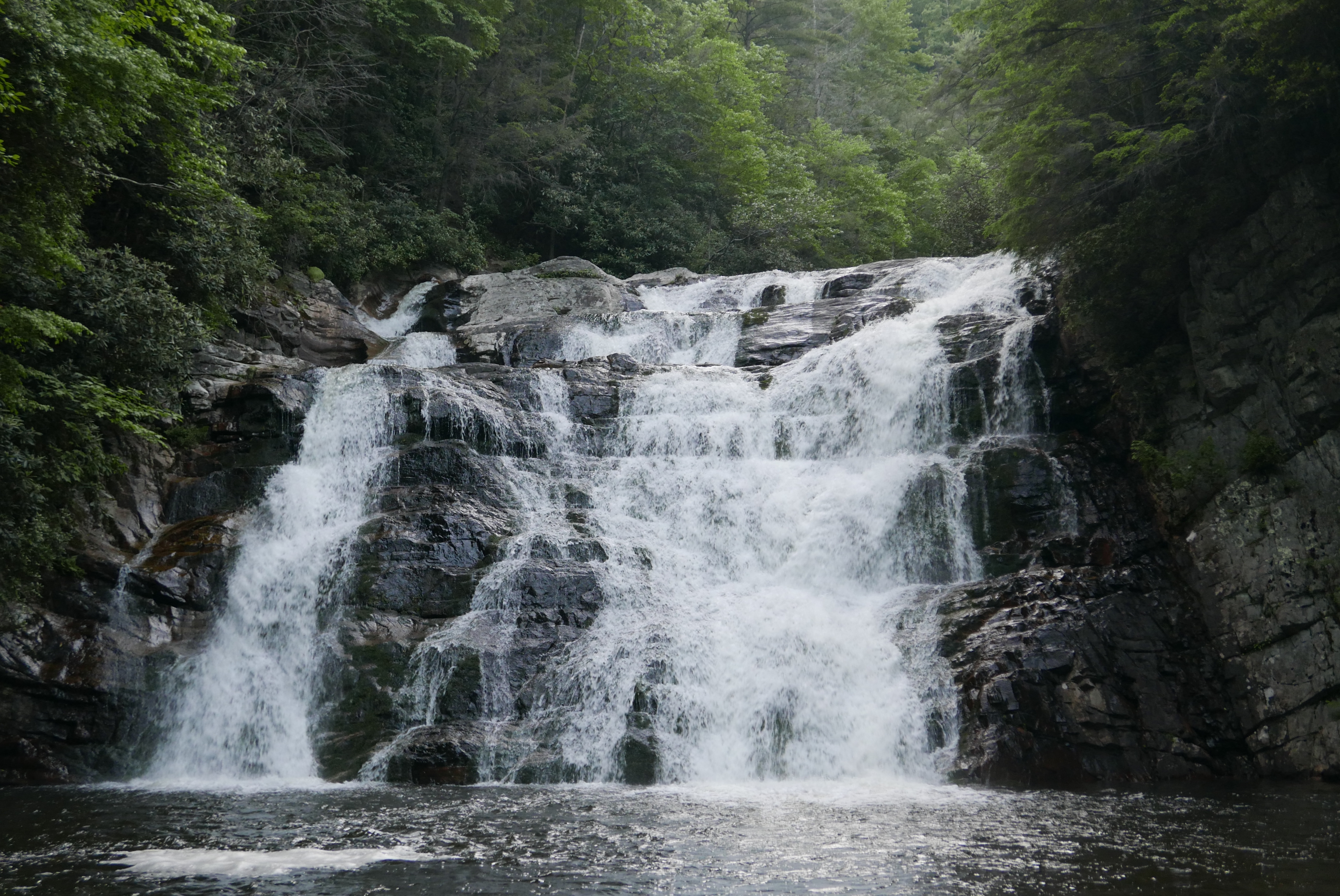 Damascus, also known as Trail Town USA, is one of my favorite towns and one that I’ve been to three times before. It’s where I ended my first backpacking trip when I was 12. It’s also where they hold Trail Days, the biggest thru-hiker party of the year. I missed Trail Days, but took a day off and still got to enjoy the town. I caught up with Pistol and his new friend Sunnyside Up. We stayed at a great hostel called The Broken Fiddle. The next morning the pair of them hiked on while I started my zero-mile day with pancakes at Mojo’s Cafe. Dog Treat and Flash, two of the friends I made earlier in the trip, arrived that morning. It was great seeing all my friends again and giving my feet a day to rest. The following morning the three of us walked out of town, Dog Treat and Flash on the Appalachian Trail and me on the Virginia Creeper Trail. The Creeper is a pretty bike path that acts as a short alternate to the AT. Having been in the area before, I chose the detour for nostalgia purposes. I rejoined with them that night and we entered Grayson Highlands State Park together the following morning. The Grayson Highlands are known for the packs of wild ponies that live there. It was a treat to see them, and they especially enjoyed licking the salt off my legs. 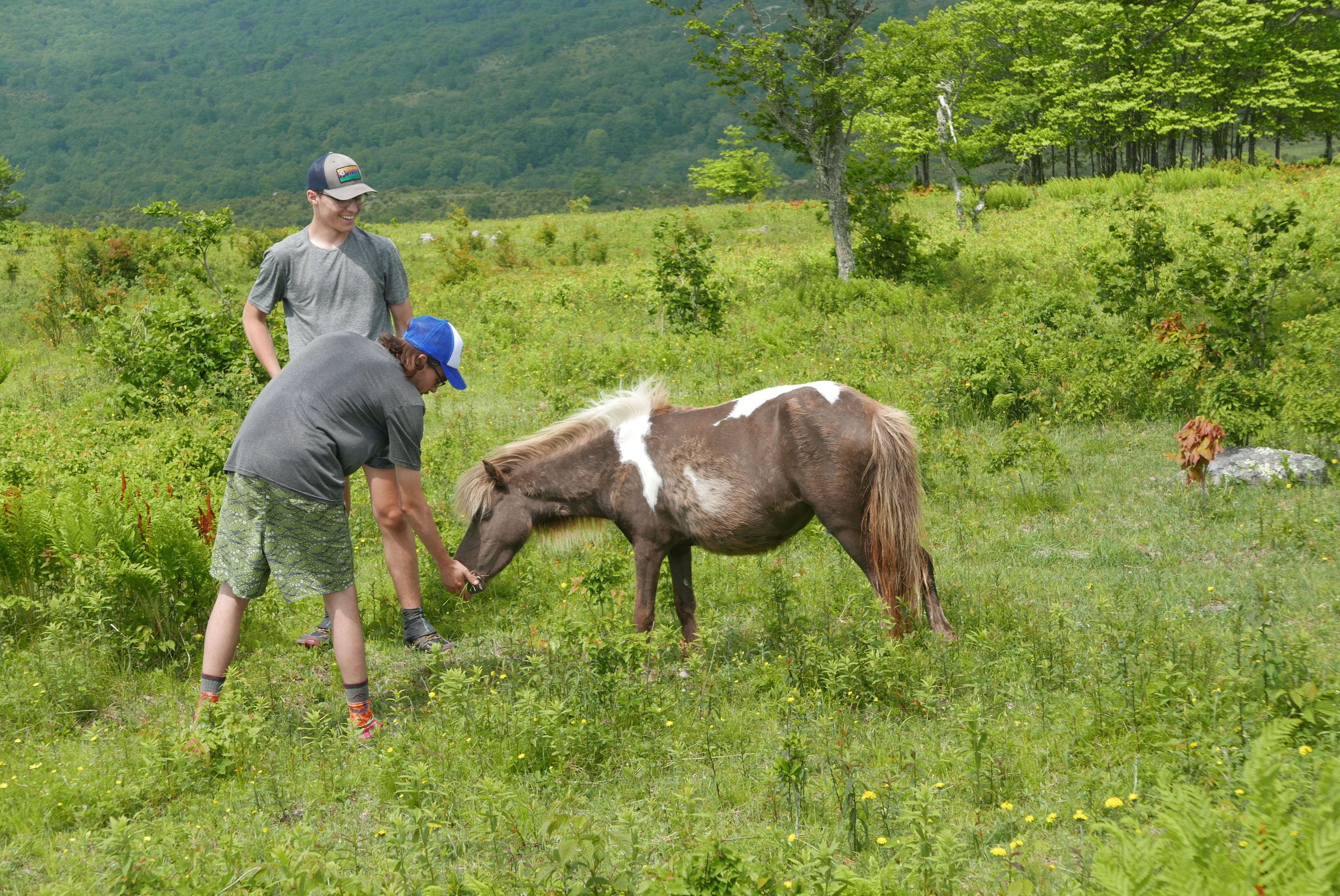 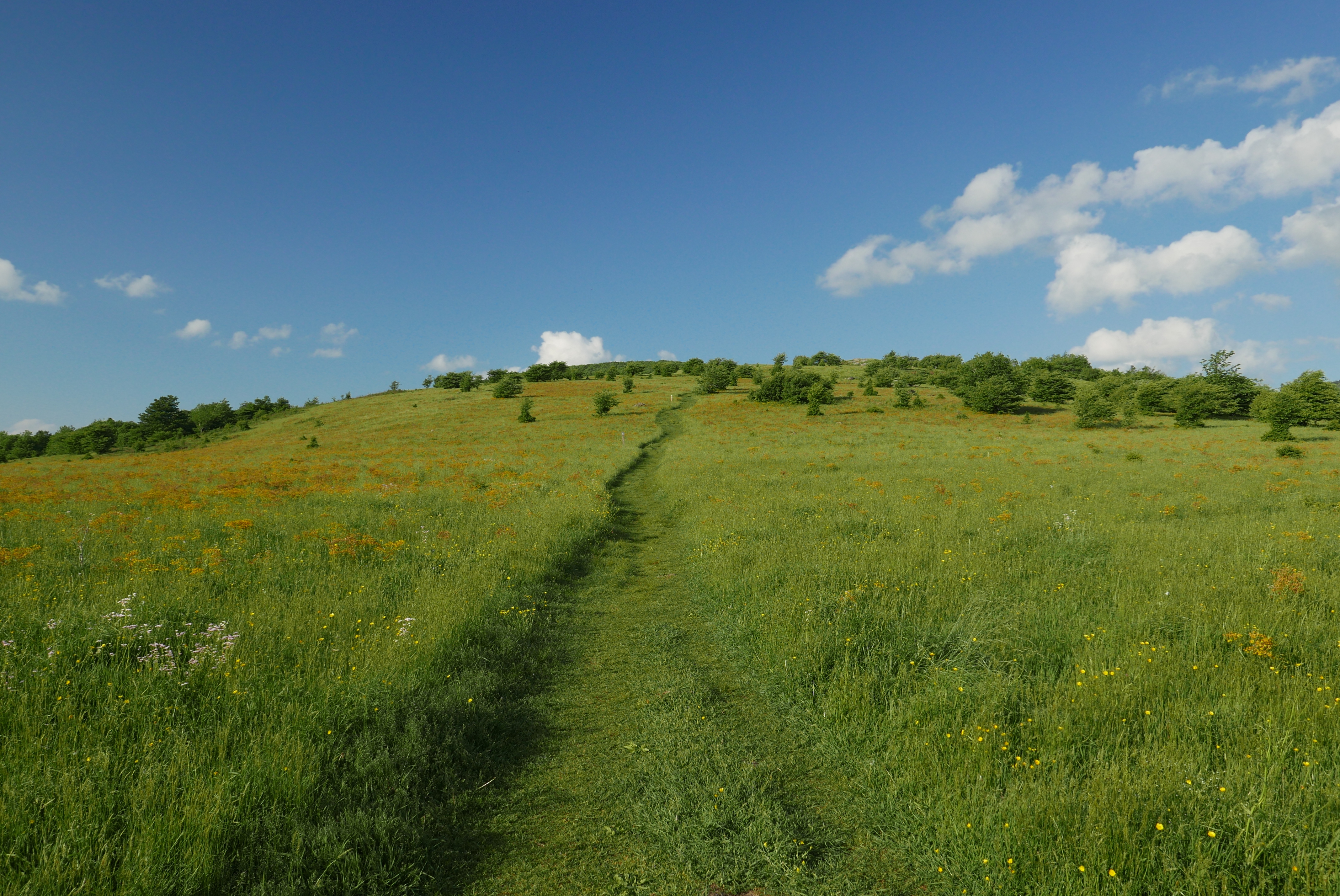 During the next stretch of trail we reached a town every other day. Marian was the first of those towns, the day after walking through Grayson Highlands. It was a large town and Dog Treat, Flash, and I headed straight for the Taco Bell after getting a hitch from a nearby road crossing. Walmart was conveniently across the street and had a welcoming variety of food. I packed out half a watermelon to the shelter we stayed at that night and feasted like a king. Two days later we reached the road crossing near Bland, a much smaller town. Luckily, Dog Treat’s parents planned to meet up with him that evening. They graciously took all three of us to the larger Wythesville, bought us dinner, and let us stay in a hotel with them that night. The hot tub and real bed felt so good and contradictory to thru-hiking. The next morning we said our thanks and goodbyes. Fueled by the continental breakfast, we hiked until we came to Dismal Falls. We set up our tents, ate dinner by the waterfall, and hung around a fire until dark. The following day’s hike led us to Pearisburg, another large town with another Walmart. The Holy Family Hostel is run by a local church in Pearisburg and we enjoyed our stay there. Getting into Central Virginia and passing the 600-mile mark felt amazing, even though so much of the trail remained ahead. 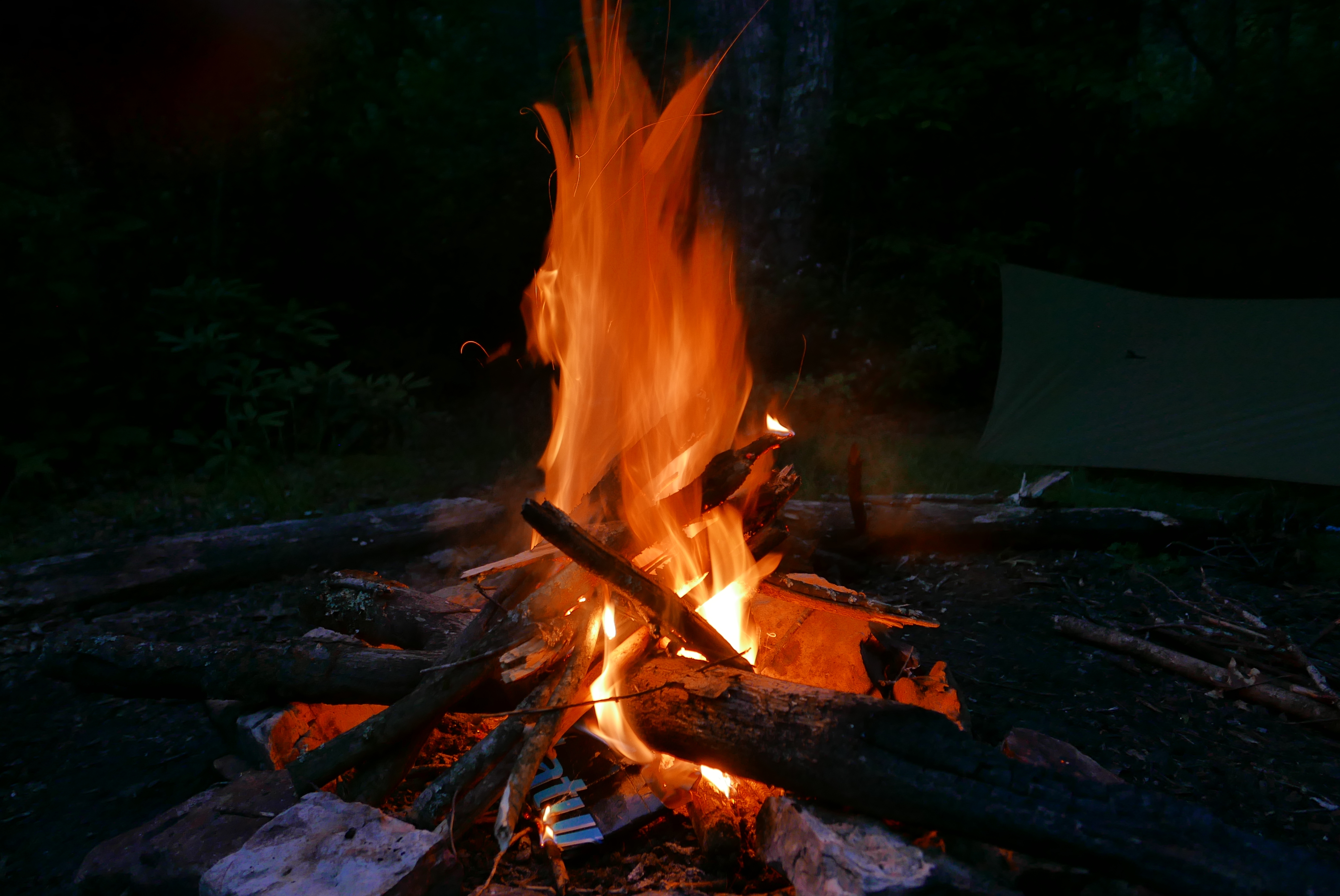 Hi! I'm Vince, just an Ohioan hiking the Appalachian Trail this summer. When I'm not wandering in the woods, I meme my way through college and pretend that I like to run.