It’s been a long stretch since I’ve blogged, I know, but it been a long stretch since I’ve been in town as well (one shower in two weeks. One!). I’m currently hunkered in my tent exactly 0.4 miles away from Roan Mountain, Tennessee, waiting until tomorrow when my mom is meeting up with me to hike for a week. I’m very excited, and proud of myself for resisting the urge to bust into town earlier today and eat all their food while I waited for her flight to arrive. My wallet will thank me.

I left Hot Springs. It was hot. I had consumed approximately 15 smoothies in the 12 hours I was in town. I sent home my sleeping bag liner and stared at my rain pants before eventually deciding to hold onto them a bit longer. I was so happy not to be sick I burst out of Hot Springs. The 70 miles it would take to get to Erwin was the longest stretch without a town so far. My food bag weighed a ton.

And then it rained. And rained and rained. When it didn’t rain, it was so foggy I was soaked anyway. It would stop raining long enough to lure us into false hope and then it would rain again.

I got to Erwin and it rained while I was there. I had a memorable night at Uncle Johnny’s during which it rained. I hiked out and it rained. It rained so hard I spent an enjoyable day zeroing at Curly Maple Gap Shelter, sitting around with other thru hikers, sipping hot chocolate with our sleeping bags draped over us like blankets. It sort of felt like we were kids playing in a fort. The rain on the tin roof was deafening, but I felt better being properly covered during the thunderstorms. I hiked more and it rained more. For one glorious day it didn’t rain, and I almost burst with happiness. The next day, it rained.

I hit the 300 mile mark during this stretch, and finished up all the miles in North Carolina. 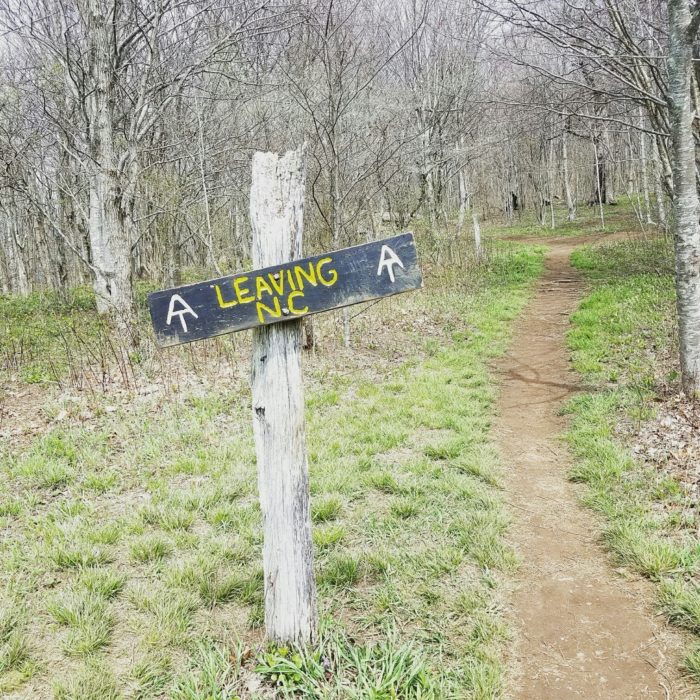 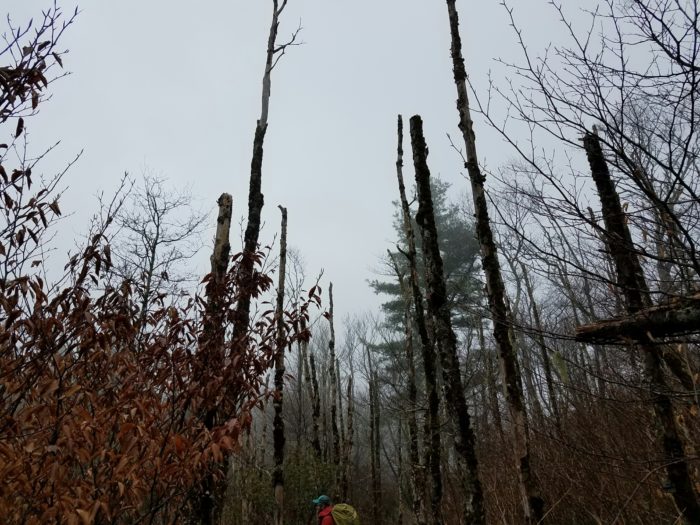 I’ve never seen The Blair Witch Project but this is what I think it looks like.

It would rain for about 20 minutes of every hour, and the other 40 minutes would be sheets of mist so thick, you could glance behind you and then have a hiker come up behind and startle you a second later.

It was pretty gross. Nothing dried out. I smelled like wet dog. I ended every day with mud up to my ankles. I’ll call the conditions: damp. And spooky. 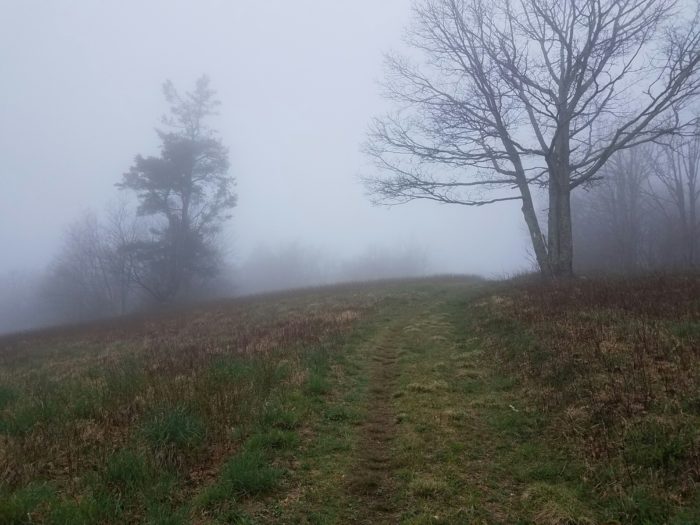 I don’t actually feel like I had a low, low point this week. Rain is inevitable, and really only one day offered a true torrential downpour and I enjoyed it toasty and dry with a hot chocolate in one hand and my kindle in the other. It was kind of a relief to remember there’s no one with a gun to my head forcing me to walk every day and this isn’t a job. If I want to zero in the woods, well, I can goshdarn zero in the woods.

That said, there is a limit to how long you can keep your spirits up when you have to put on soggy socks every morning. Bad weather wears you down, and there was a marked uptick in quitting murmurs this week. My tent was soggy, my clothes were soggy, my shoes were soggy, I was developing trench foot. If souls were a tangible thing, mine would have been soggy.

We were sitting around a real, honest to goodness fire at Clyde Smith Shelter, holding socks over the fire on sticks like hot dogs, musing about some rumors that maybe the weather was going to be nice the next day. A 2016 thru hiker rolled in. He’d missed a 20 mile section of the AT last year due to a fire and had returned to finish it up. He was doing the Roan Highlands again to make the trip worth it. Someone asked what his favorite sections of the trail were, and he listed the usual subjects, adding “What’s coming up for you guys? Roan Mountain, Round Bald and Jane Bald? Probably some of my favorites as well.”

That basically settled it. For over a week, every summit had offered me a great view of a white sheet of fog. 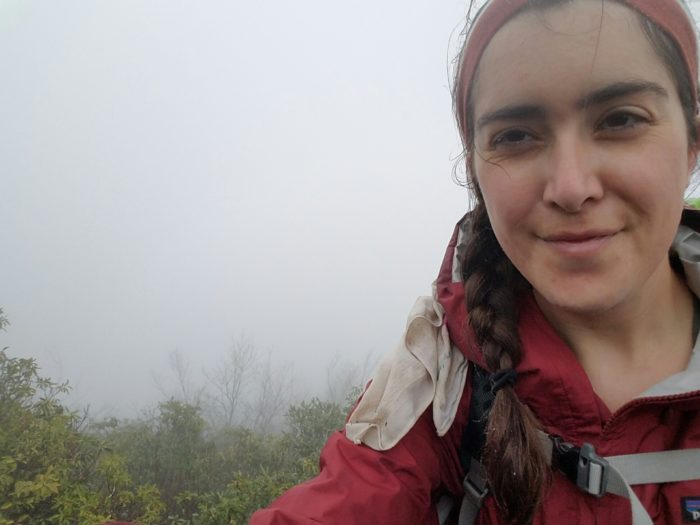 If we were going to have one good weather day, I was going to pack as much into it as possible. I scheduled myself an ambitious day: up and over Roan Mountain, lunch at Roan High Knob Shelter (so many thru-hikers spoke affectionately of it, and I felt guilty skipping over it entirely) and then over both balds before spending the night at Overmountain Shelter.

It’s easily been my favorite 24 hours on the AT. The sun was shining and, energized by the weather, the climb over Roan didn’t feel so bad. Roan High Knob Shelter is the highest shelter on the AT. While most shelters are lean-tos with three walls, it has four, a door, and a weird little attic area. I laid out my socks to dry in the sun and I think my soul did too. 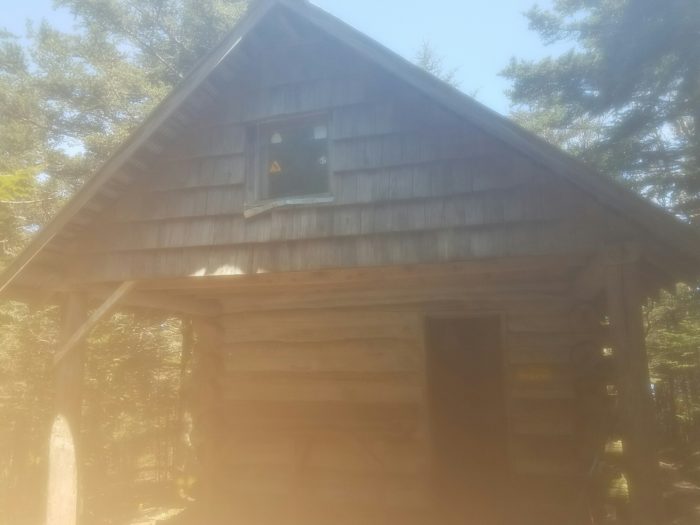 I glided over the balds. I stood on top of Round Bald. If I looked one way, I could see the mountain I’d just climbed. Behind it were more mountains I had climbed, stretching hundreds of miles back. If I looked the other way, I could see Jane Bald, the trail clearly visible stretching over it. Behind it were more mountains, hundreds and hundreds of miles worth. In that moment, I felt lucky that they seemed to stretch on forever. I was deliriously happy. That moment felt worth all the rain, and I felt like I needed to capture the moment in some way, bottle it up and save it for the next time it rained for a week. 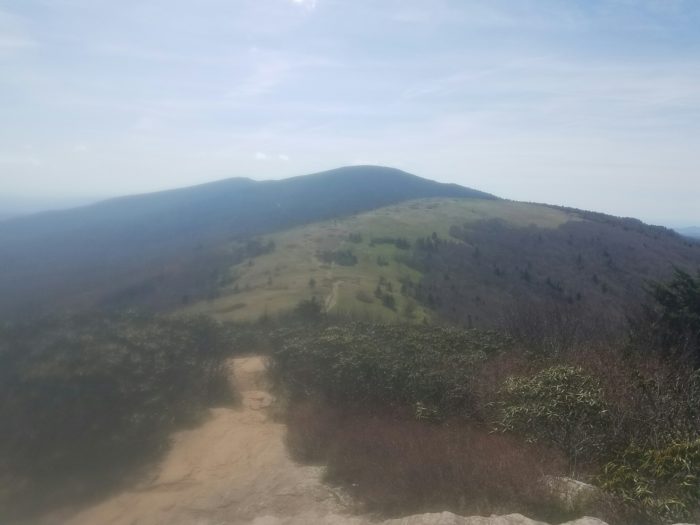 I’d spent the last week feeling like the weather was personally out to get me, but I realized that every thru-hiker to climb these balds over the previous seven days (and, frankly, the coming ones) didn’t get to have the experience I was having. I felt charmed and blessed and so, so lucky.

I climbed up and over the next bald and set up camp at Overmountain Shelter, another AT favorite. It’s a repurposed barn and can easily fit anyone who wants to stay in it. It’s also the only shelter in Tennessee to have a privy, to the joy of many who had gone without for 50 some odd miles now. 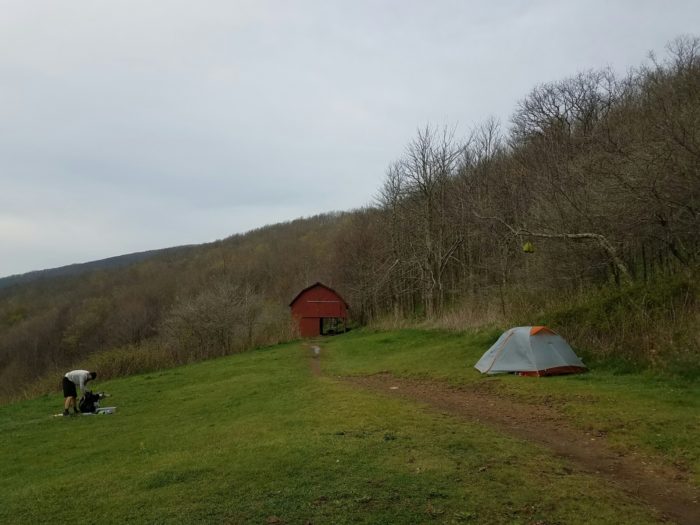 I generally prefer to tent when the weather is nice, so I set up on the large flat expanse of grass in front of it (no shortage of flat tent spots either). I could tell from the sunset that the sun would rise up over the valley below in the morning and I set my alarm.

While I  wake up at 7:00 on the dot every morning I’ve been out here without the help of an alarm, I generally struggle with anything earlier. But even I managed to unzip my tent at 6 am, shove my air mattress out and slide myself out on top of it, to the amusement of everyone else already happily sipping coffee with their tents packed up next to them. A better photographer would have better pictures for you. 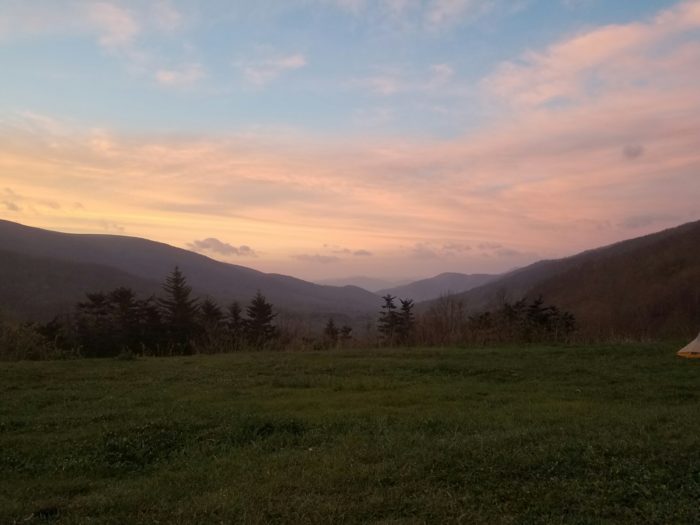 Instead you get this

I drank crappy coffee and wondered if this was the best 24 hours in AT history.

MVPS of the Week

I had two other stories of note for this stretch, and neither of them exactly fits in the scorecard layout I’ve saddled myself with.

Big Firescald Knob offered my first real bad weather bypass conundrum. For those unfamiliar, there are sections of the AT too dangerous to hike in bad conditions that offer alternative stretches to avoid say, being directly on top of a bald during a thunderstorm. This offers a conundrum for people who put a lot of emphasis on hiking every inch of the AT. In this case, the bypass was to avoid an exposed ridge line. It was raining, but I assumed the bad weather bypass was really intended for when there were high winds or lightning and I assumed a little rain wouldn’t be a problem. The ridge line was a tricky stretch in the rain, with lots of climbing over slick rocks that landed me on my butt several times, but I survived it. On the other side, some helpful northbounders decorated the sign that marked the same stretch for southbounders. Graffiti is a bad habit of thru-hikers, but I was tickled by this one: 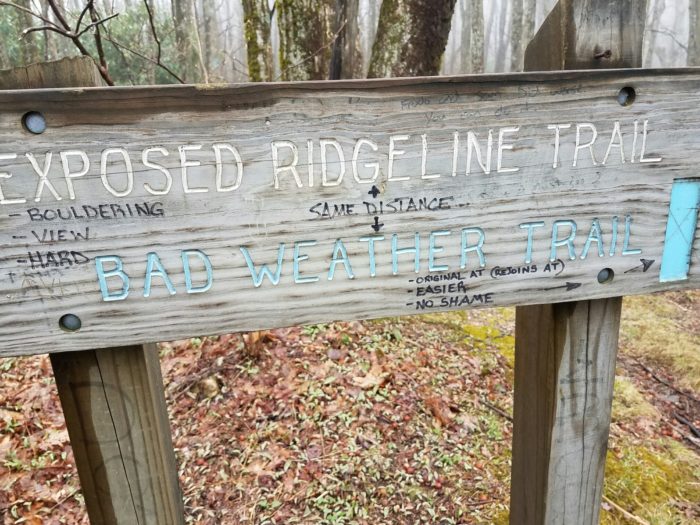 It’s hard to see, but someone on the top penciled, “Frodo and Sam did worse.”

Another memorable stretch included climbing Little Hump and Hump Mountain. There was a thunderstorm possible in the afternoon and I got an early start, intending on being well over the exposed tops before that came anywhere near. The weather was relatively nice until I got out of the treeline. The wind became intense like I couldn’t describe.

I couldn’t walk in a straight line. I had put my hair in a sloppy bun in the morning, and the wind yanked my hair tie away, flinging my hair around wildly. I was genuinely glad I had just topped up on water and was being weighed down by a fairly hefty pack. The straps on my pack whipped around wildly; when I got back in the treeline, I checked my face in my camera phone and found welts along my neck and jawline where my sternum straps had whipped my face. There was a cut in my leggings where my waistband strap had sliced through. The first time you experience any kind of ridiculous weather, it’s kind of amazing and novel before it gradually turns annoying, and I came out of the wind and burst out laughing.

I have trench foot.

While the bulk of the week was a bit of a trudge, it had such high highlights that I feel obliged to give it a 7 out of 10 fudge stripe cookies.