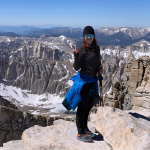 How it all Ended

Last we left off I was getting back on the trail, which indeed happened. I wound up getting on the trail with the sister of a friend of mine in Massachusetts, right before Upper Goose Pond Cabin. Which was epic. Though I almost felt like I shouldn’t have stayed the night there since I had only been on for about a day before I arrived. Still amazing and it was the second lake I had swam in on the AT. Absolutely glorious, 10/10 would swim again. We hiked on through to Vermont. In this time I developed a terrible bunionette (bunion on the outside of your foot) in the span of three days. I thought it was normal readjusting to backpacking life foot pain, it was note. I quickly ordered some Altra Lone Peak’s from REI and they basically saved the day, though it did take about a week for the pain to really subside. I looooove the Lone Peak’s SO MUCH. They’re literally like slippers and the grips are fabulous. So grippy. There was an adjustment period for the zero drop, but it was worth it compared to the terrible footpain. 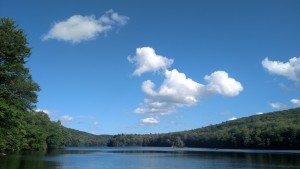 Upper Goose Pond! Such a lovely place to be =] 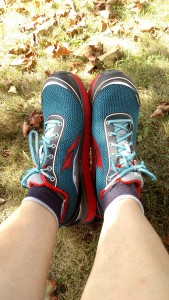 Vermont was my favorite state up to that point on the trail. It was literally like a magical wonderland and it was so epic. The hiking was comfortable and it really did feel like Narnia to me. Plus, fire towers were a thing. And I did take a gondola ride. I visited the Yellow Deli in Rutland, but didn’t say there. I do have to say their tea is on point. Yerba Matte is the best, as I hate coffee and the caffeine concentration was superb. I even enjoyed Vermont’s mud. Playing the “avoid the mud game” was an enjoyable practice. The view from Killington was awesome. I summited late in the day, after one of my hardest days on the trail, and watched the sunset. Feelings were had and I was glad I climbed the steep trail to the top. 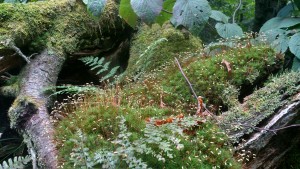 Just a snippet of the magicalness that was Vermont 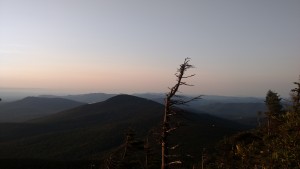 Summit of Killington. Feelings were had.

I’m sorry these are vague and fast descriptions, maybe I’ll come back to them later, but it was all good stuff! After this I went home for a week and then got back on with another group in the Whites. This was probably the biggest struggle for me. I wrote about the experience on my personal blog, but I don’t care to rehash it here. Essentially, I made some poor life choices. I shouldn’t have attempted to do the Presidentials feeling as unwell as I did. I wound up getting dehydrated, having hypothermia, and then just being so shot the next day I wound up night hiking down off the AT. All in all, one of my scariest life experiences, but I learned from it. 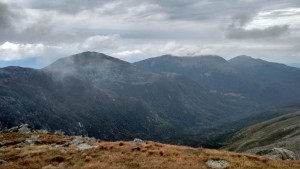 The Presidentials. Just North of Mt Washington. Adams, I think?

I wound up skipping the Wildcats and zeroing in Gorham, NH to recover. I hated it. I wanted to hike, but after how dangerous it had been before, I knew it was better to not. The night before I was supposed to get back on the AT and head into Maine, I wound up vomiting profusely and felt so weak the next day I knew I couldn’t hike. So I scheduled an appointment with a doctor in Bethel, ME, which looked like a straight hitch from Gorham. I went and I stuck my thumb out in front of the local McDonald’s. After 20 minutes of fruitless hitching, a Subaru Forester pulled up. It was Loon. How even? The trail truly and always does provide. 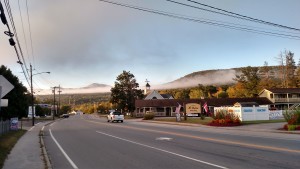 Gorahm, NH in the morning

Loon, who I had met all the way back in Georgia, happened to be hiking up in the Whites when I had gone through. He drove me all the way to Bethel and waited for me during my appointment. The doc decided to test me for Lyme disease, but it would be a few days before I would get the results. He told me to rest in the interim. After the appointment, Loon and I went for sushi (BEST SUSHI EVER. BETHEL, MAINE. NO JOKE) and then he drove me to The Cabin in Andover, ME. Here I met Honey and Bear, friends of his for years. They welcomed me with open arms, even though I was ill, and demanded I stay until I felt better. 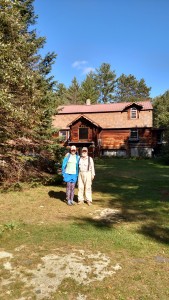 Photo of me with Loon in front of The Cabin

I never did wind up hiking in Maine, but I did get to see a bunch of it. Maine is the most beautiful place I’ve ever been, hands down. It’s so wild. I stayed with Honey and Bear for a week while I was figuring everything out. They were beyond wonderful to me. Honestly, they are the coolest grandparents I wish I had. They’re in their 80’s, but Honey still hikes regularly with her sister and they both still run the hostel. Such amazing people and I highly recommend stopping at The Cabin if they’re open next year. BUT BE KIND AND RESPECTFUL. They mean the world and from what I’ve heard people have taken advantage of their generosity in the past. 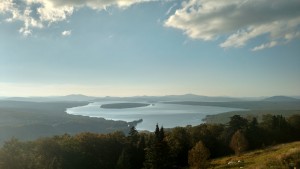 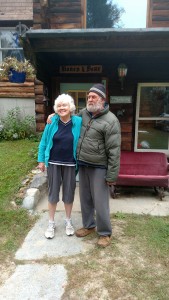 HONEY AND BEAR. Literally the nicest people ever. EVER.

It was also at The Cabin that a dream was born. I found out that I likely had Lyme disease and I honestly wasn’t feeling any better, even after almost 10 days off the trail. I was completely exhausted and had a continual headache that wouldn’t leave. The doctor prescribed the antibiotics for Lyme and I decided I needed to be done, as much as I didn’t want to be. It would be at least 30 more days of feeling wretched, and unlike other sections of the trail, there was no way I could hike Maine feeling so ill. So I let myself dream. And dream I did. I dreamt about the Spring of 2016, when hiking season would roll around again, and what that would mean. Another trail I’d been thinking of popped into my head, the PCT. Which sounds totally ludicrous, maybe. Probably. But I was hooked, even though the AT had kicked my ass, chewed me up, and spit me out, I wasn’t ready to be done. But I wasn’t ready to face the AT again so soon either and I’d always wanted to go west, so there was my reason. Plus I just really wanted to hike it. So much beauty. I’ll talk about that more later, but for now I’ll leave you with the knowledge that instead of heading back home to Michigan when I left Maine, I hopped on a plane to San Diego. And I saw this: 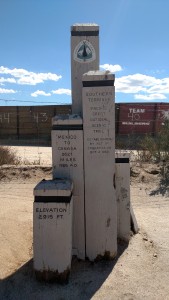