It was an extremely long five days in the 14th and final state. Crossing into Georgia immediately meant the finish line was near and the removed world I’d become so familiar with was going to end. 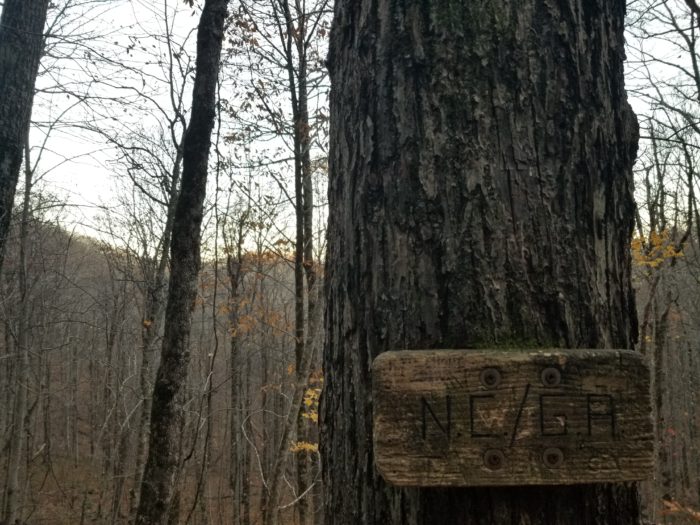 I was doing high-mileage days, feeling wild and invincible, and genuinely enjoying my time in the woods. I accepted my bitter mood on rainy days and appreciated the sun whenever it showed itself. The highs of good days had me wishing I could just be out there forever, coincidentally bringing out the day hikers who would remind me it’s coming to an end with their celebratory smiles and words of congratulations.

As much as I wanted this achievement under my belt, I didn’t want to end.

The first day into Georgia I was hiking late and caught up to Sugar Glider, Pineapple, Tank, Crispy, Field Trip, Pretty Feet, Vito, and Odie, who had an awesome fire going. I was planning on hiking farther on but I set up camp there and enjoyed the company. I think it went below freezing that night so I slept semi-suffocated in all my layers. It gets cold fast so I’ve learned at night I’d rather shed layers if I get hot (which was never) than fumble around adding layers. These days I was sleeping in my leggings and pants, a long-sleeve, fleece, down vest, and rain jacket on days it ended up dry. I’d sleep with one buff around my neck, one over my head and under my hat, plus my pair of gloves and a pair I found on the ground one day on trail. In addition to my sleep socks, I invested in a $5 pair of CVS slippers (not lightweight but definitely worth the warm toes). Voila, I was comfortable. (Not even being sarcastic, honestly!) There was the odd night I’d wake up and panic a little because I couldn’t find the opening in my sleeping bag and I’d feel like I was out of air, but meh, that’s tolerable when the alternative is breathing in cold air that has the ability to freeze all my blood and stop circulation if that’s even a thing. 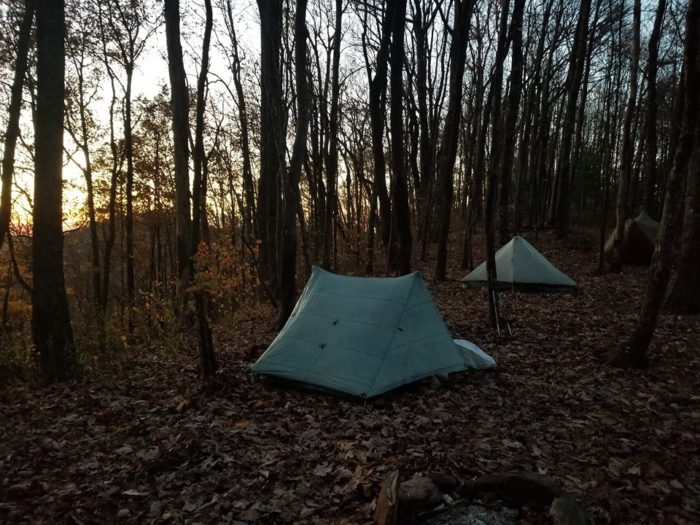 I was up earlier than everyone and packed up with a greasy diner breakfast planned in Hiawassee as incentive. The road into town was a mile down the trail so I stood there for half an hour trying to hitchhike in. I ended up walking off in a huff when the fourth car waved at me and drove on by. A few miles later I gave in and took a break to boost my mood with a cup of instant coffee and a classic oatmeal breakfast. I stopped at the shelter the group was aiming to stay at, wrote them a note in the logbook, assuming I wouldn’t see them again, and went on to finish the day with 27 miles. It was a great day out and I had myself convinced I’d thought of song lyrics perfect for Carrie Underwood to sing, and if only I could get her email she would be sold. Then I decided I wanted to be a vegetarian, vetoed that idea two minutes later, and started planning a trip to Egypt followed by a SOBO PCT try. Anything was possible. I stopped a lot to take photos of pretty things and I tripped over yet another root and went flying. I get a weird kind of satisfaction in falling without injury. It was just another one of those good days! 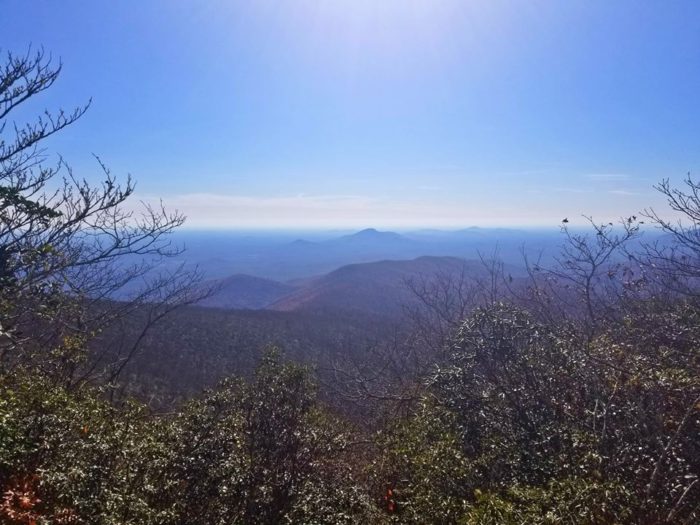 It was raining in the morning so I took my sweet time. I started hiking at noon and stopped 11 miles later at the gear store by Blood Mountain. I got a pizza there and sat by the fireplace drying out and tried to persuade myself to go back out there. It was actually one of the most miserable days I’d had on trail weather wise. It poured that cold kind of rain, where puddles numb your feet and have no chance at warming up between each puddle because the trail had turned river-like. Instead, when the others showed up later on and I was still there, I thought it would be cool to finish with the group I’d gotten to know and we split on Blood Mountain Cabins for the night. It was nice to just chill out in the warmth of a real cabin with the group so close to our finish date and relax, even if it meant walking around in towels until the laundry was ready. 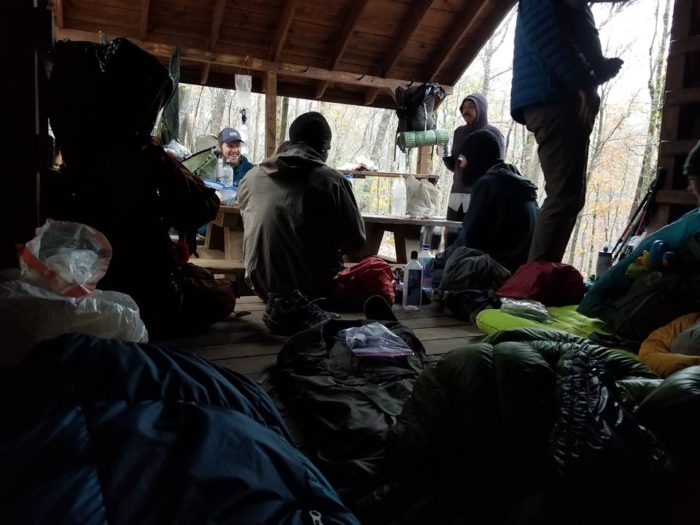 Twelve of us in a 12-person shelter.

Blood Mountain was our last climb and I’m happy to say it was enjoyable. To those without trail legs I can see it would be tough, so for us SOBOs it was a good time. The fog even lifted to give one last view.

On the 14th we all summited Springer Mountain, then backtracked 0.2 miles to stay one last night on trail at Springer Mountain Shelter, leaving the next morning to do the eight miles of the Approach Trail and finish for good.

I was simply after a physical challenge.

2,190 is a large amount of miles so when I found out people try to walk them all in one go I immediately thought, “I want to try!” 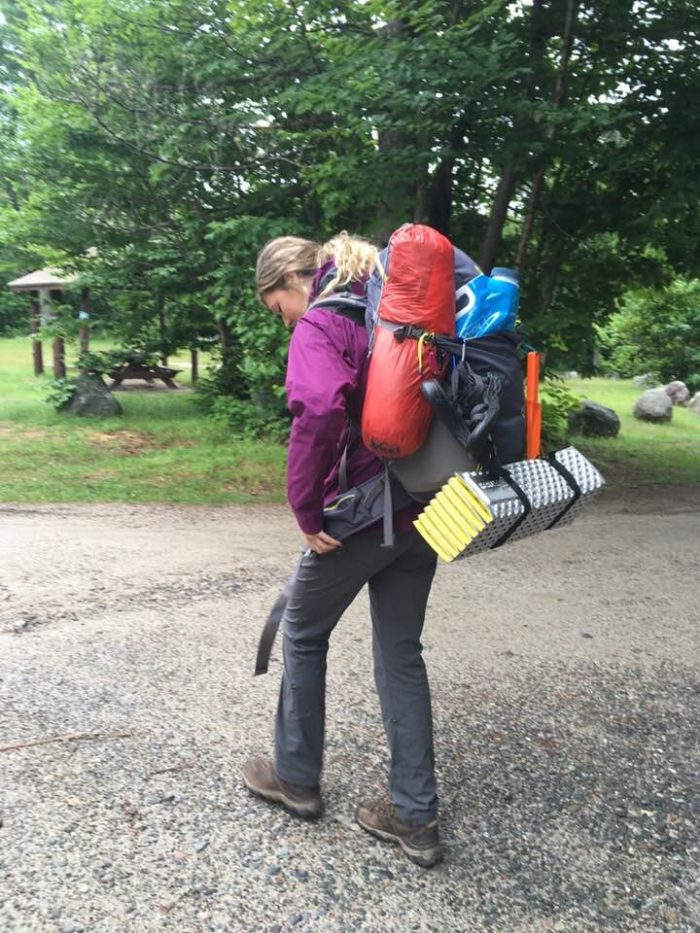 Me on day one. How did I think this pack arrangement was OK?

I wish I cried or something on top of Springer Mountain, but if I told you I did then my friends back home would out me for lying because they know me too well. I will point out that feeling of accomplishment that washed over me, standing there (in the rain, of course) realizing just how far my two feet and four pairs of shoes had taken me. I went out there not knowing what was ahead of me besides an unrealistic finish line somewhere, but my goal was to get from A to B. I asked Traphic and Ebun back home and sure enough they thought I was completely nuts, but if anyone was going to finish it, it was me, they said. Now I didn’t believe that because it seemed way far-fetched but I was going to have fun trying. 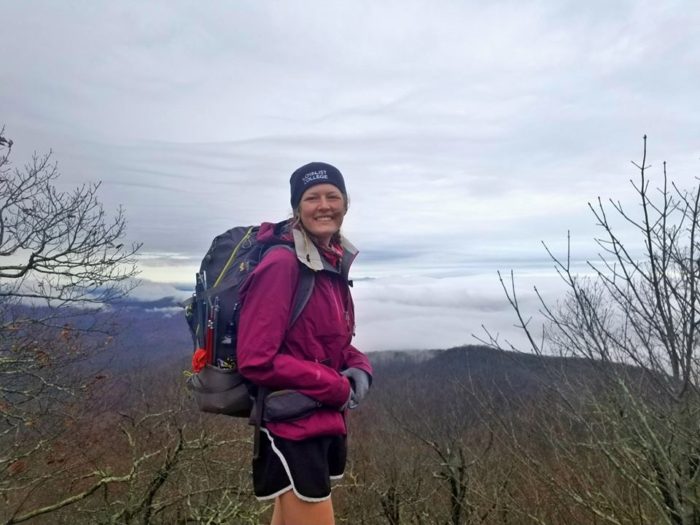 Safe to say my pack got more practical eventually.

I went on and on having fun, then I got cold and bitter for a bit until fun started up again. Then… I got to the summit and BAM—challenge complete! What the heck happens next? 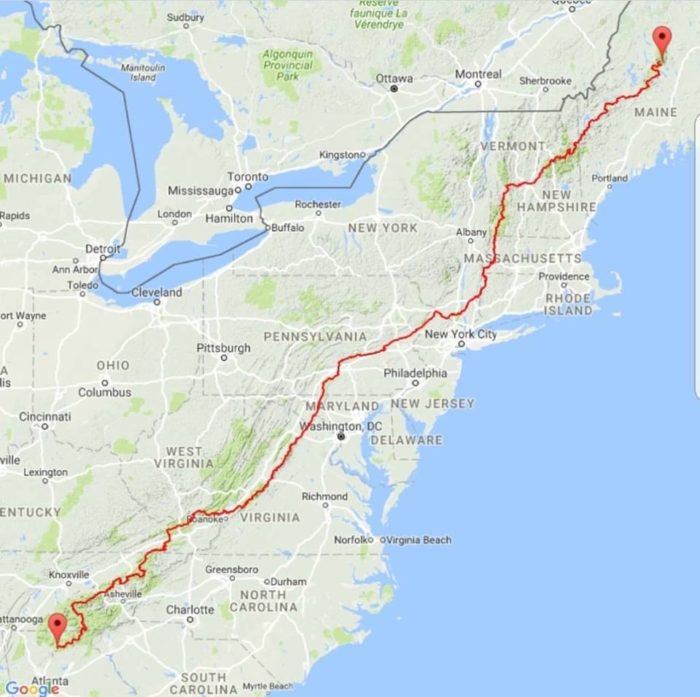 A lot of people go out there in search of some wise, monumental moment they hope to have, and for me, that wasn’t it. Once I was out there I realized it’s not just about getting from point A to B and you can’t tune out your own brain. I’m not going to blurt out every thought I had that seemed important because everyone has their own path, but one of the most important lessons I learned out there revolves around getting to know yourself. I was my own company for long periods of time and if I couldn’t like myself or my actions then I was going to have to find a way to. It’s not like I was some axe murderer with people’s lives on my conscience, but heck, if those people thru-hiked I almost feel like they could even learn a thing or two about themselves regarding forgiveness or acceptance. Maybe not, but my point is that hiking this trail was seriously beneficial for personal well-being. 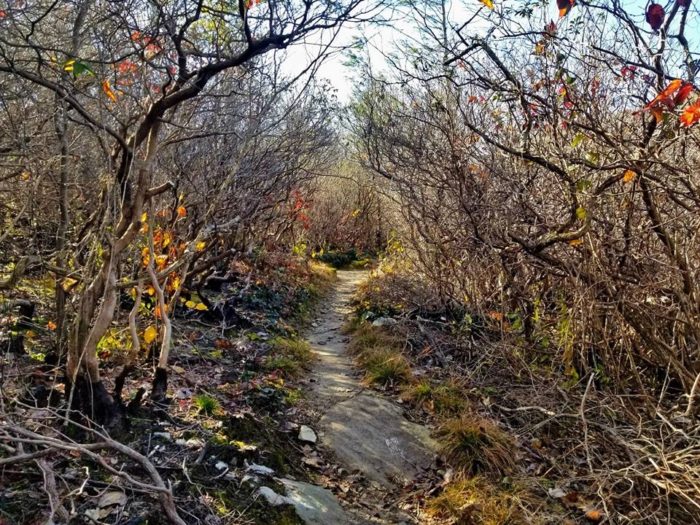 I’ve heard before that the trail is guilty of stripping you clean down to the foundations, only to build a stronger version of yourself. It’s life in its simplest form; focusing merely on food, water, shelter, and survival at times, which, yes, sounds totally dramatic but holds a scary amount of truth to it. I obviously didn’t depend on a homemade spear that I used to catch my dinner with, but it’s like you regain appreciation for everything you’ve learned to take for granted these days, coming out the other side with new perspective. 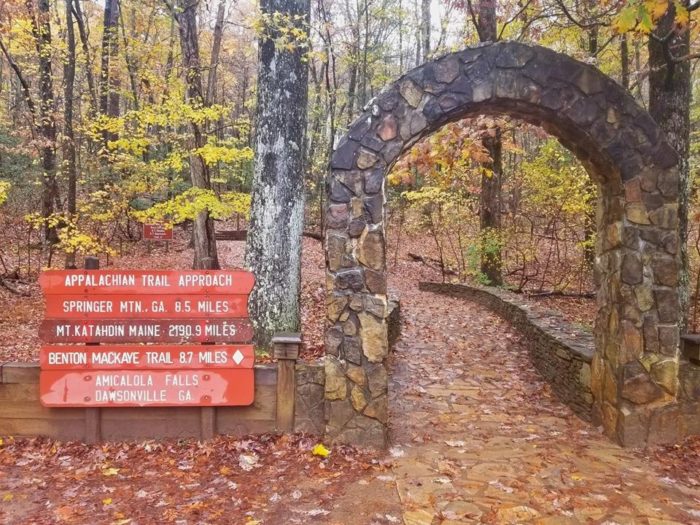 So I’ve maybe done some weekend hikes, and once I did the O Circuit in Torres del Paine, which was seven nights, but I didn’t label myself a hiker in any means. I also didn’t expect to enjoy it as much as I did so when the end came—I felt happy and proud for a bit, yes—but that joy was replaced with feelings of loss. (I don’t like feelings very much so I apologize if that made you gag as it would’ve me had I not written it myself.)

In the last nights of the trail I would sometimes have to try hard to tune out others talking about life after the trail because I would have to deal with moments of panic when I’d think about it ending. I can honestly say I loved the entire experience, and yes, I know good things do end, but I was being kind of selfish about it, oops. My mom and my friends would naturally ask when I was going to be home and what my plans were, but I’d choose not to answer rather than force myself to think about it and pretend it wasn’t ending. Then it ended; joke’s on me! 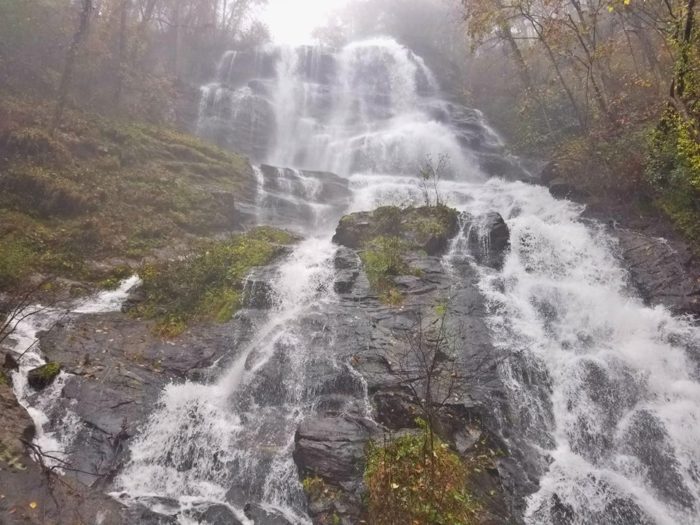 I said a brief goodbye to the eight I mentioned earlier, plus Cheeto, Dreamer, and Fire Cracker, then I experienced my last bit of Appalachian Trail magic. It’s a complicated explanation, but I was extremely lucky to meet Shelby, who was photographing Amicalola Falls and offered to drive me to a Greyhound station much out of her way. Her photography is so good it makes me want to get married ASAP so she can photograph it. (Maybe not ASAP, actually, because there are a lot of trails out there waiting for me come to think of it.) Anyway, my brother lives in Nashville and I decided to not walk so I took a bus. 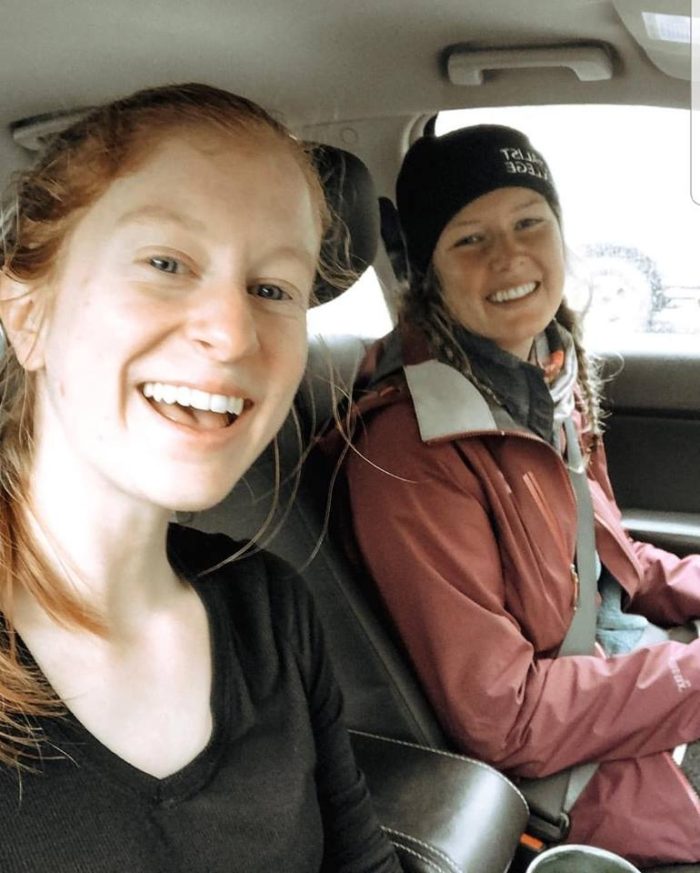 How Am I Dealing with Life Post-Trail? 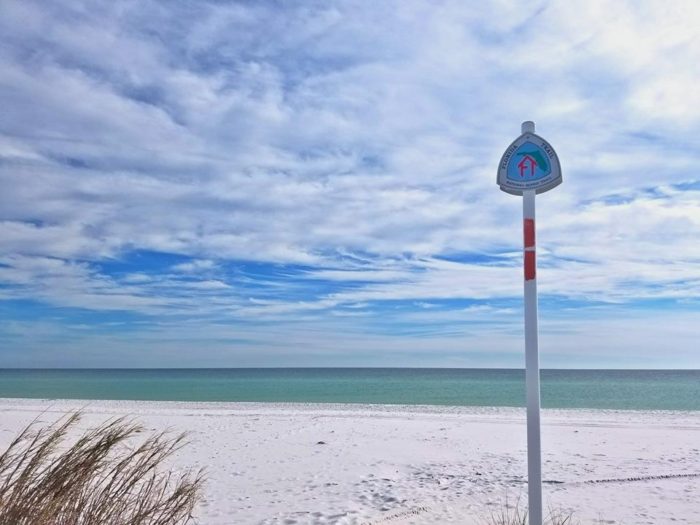 Heading SOBO on the FT from Fort Pickens.

My mom drove down from Canada (I’m starting to think she loves driving long distances) and I got to see the fam for Thanksgiving. Then I moseyed on down South to Florida and started SOBO on the Florida Trail. 1,100 miles; bring it on! Huge thanks to Field Trip, who is the only one who had anything good to say about the FT. 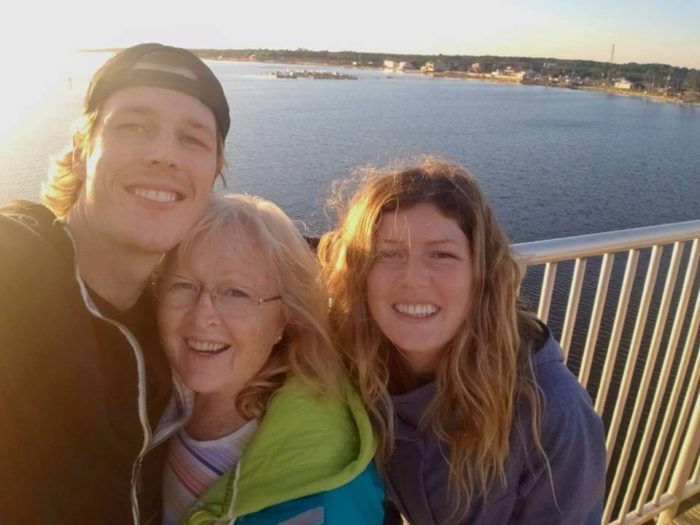 I’m so, so incredibly appreciative to everyone who helped me in some way along the trail. The experience has been unreal and it’s no wonder I can’t bring myself to leave the hiking community just yet. My friends back home are somehow still there for me even though I suck at responding to mostly everything, but I do miss you guys, and I apologize to The Trek for still not knowing how to format my photos (thanks for fixing them every time). Not really sure I have consistent readers but this thing was pretty fun to document. 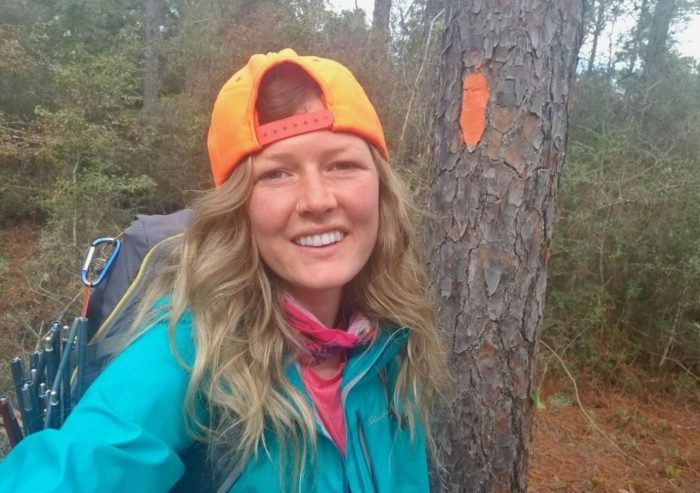 Orange is the new white.

I guess that’s that, 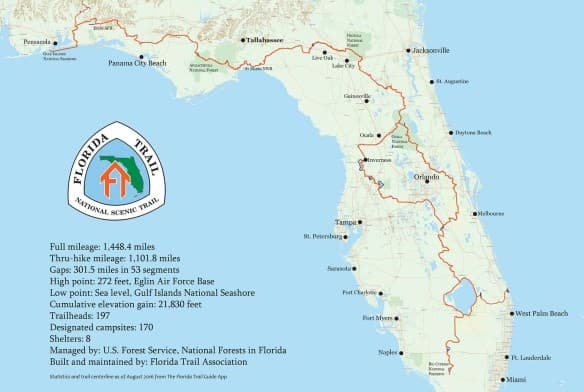