Shilletha Curtis is a 28-year-old Black, queer New Jersey native, and a Rutgers graduate with a degree in social work. Shilletha plans on hiking the Appalachian Trail as the first leg of completing the Triple Crown. This story has also appeared on the ATC website.

“You’re not special because you’re brown. In this group, you’re just another hiker. You aren’t the first person of color to hike the AT.”

“And I won’t be the last,” I furiously slammed down on the letters on my bold, black keyboard. A raging wildfire lit within the depths of my soul and there was nothing that could quench its power and screams. My whole life I have dealt with racism, but this time I decided to use my voice.

Four months ago my girlfriend and I decided to take a day hike at Harriman State Park in New York. While exploring the other side of the lake, we found an obscure trail nestled behind a petite amber farmhouse. Excitedly we pushed forward, and just as we were about to ascend a steep slope, an older white gentleman appeared. He proceeded to point out a nearly vertical hill behind him and stated that it was the Appalachian Trail that spans from Georgia to Maine. He ended the conversation with, “Be safe out there. You two are lovely girls, I hope you find good husbands.” We laughed it off.

I headed toward the slope and stood awestruck. The thought of people from all over our God-given Earth, walking 2,200 miles through 14 states, was incredible. Since that day I have been out and about collecting my Big Agnes tent, trekking poles, and my first set of trail runners. As my excitement grew I took the initiative to look for others who had the same passion as mine. I immediately took to social media to look for groups that fit my interest. I came across three Appalachian Trail groups and requested membership promptly. First I joined the general “AT group,” which has around 60,000 members, followed by the “Class of 2021,” and finally, the “Women’s AT” group after a few suggestions from the main group.

As soon as I joined all the groups, I dove right into asking questions about gear and safety on the trail. A small gray star soon appeared by my name as I was “A rising star.” I took to the general Appalachian Trail page and spoke about my gear selection, as well as my fears of being a black hiker in the South.

As soon as I mentioned my fears, many members began to ask why do I fear the South. Was it the heat? Reality began to set in. None of these white people could understand my fears. They did not see the generational effects that lynching has had on my community.

According to the NAACP, “From the years 1882-1968, 4,743 lynchings occurred in the United States. The blacks lynched accounted for 72.7% of the people lynched (…), Most of the lynchings that took place happened in the South. A big reason for this was the end of the Civil War. Once blacks were given their freedom, many people felt that the freed blacks were getting away with too much freedom and felt they needed to be controlled. Mississippi had the highest lynchings from 1882-1968, with 581. Georgia was second with 531, and Texas was third with 493. 79% of lynching happened in the South.” Source

To this day many Black people will not venture into the woods with fear of being hung from a tree and becoming a spectacle for white spectators to see. Many of them came with a smile on their face as Black bodies were tethered, burned, and even stabbed while dangling from a noose. A noose that still creeps in the back of our minds.

I was not bothered until the bans and disgusting messages from administrators of these groups came rolling in like ocean waves, suffocating my already ignored voice.

These fears have manifested time and time again as I come to terms with the reality that I may be the lone Black woman on the trail. It’s painful and traumatic and it never goes away. Our pain has not eased.

Furthermore, white privileges allow AT hikers to hitchhike into the towns with ease, without incessant stares and silence. We all know that silence equals violence. I can only wonder what they are thinking about me and my questions. I observed that every group was 99.9 percent white and I was the .1 percent.

Initially, I was not bothered until the bans and disgusting messages from administrators of these groups came rolling in like ocean waves, suffocating my already ignored voice. I had been accused of race-baiting and told that it was irrelevant to mention my race while in the group. I apparently was “just another hiker.” I was told “HYOH” (Hike Your Own Hike). When I confronted this, I was met with great adversity from white men in the group.

You see, that’s where white hikers are wrong. Being a Black, queer woman on the trail is an anomaly. We have to worry about whether we will be judged by the darkness of our skin. If people will call us out of our names. We ask ourselves, will someone drag me into the woods and lynch me like they did countless times before to my brothers and sisters in and even after slavery? Will these men in these groups who plan to carry firearms see us as a threat? Will I, too, end up dead because I am Black?

Systemic racism runs deep and police have been killing us for years. The racism that runs deep within the families and hearts of white people kills. Again I will say, silence kills. White silence kills. To think that a few white members who stand with me and have made posts only to be taken down because it mentions race is disgusting.

Especially during such a sensitive time where 26-year-old Breonna Taylor was shot eight times as she lay asleep in her bed. She never had a chance to defend herself and I am one year older than her. And George Floyd, a Black man killed over accusations of giving a clerk a $20 counterfeit bill. Silent tears streamed down my face as I watched that video on Twitter. For eight minutes that white cop in Minneapolis, Minnesota, had his knee pinned into George’s neck. In the video, you hear George saying “I can’t breathe” as he calls for his mama and then loses consciousness. I watched them drag his lifeless body onto that gurney. I heard the screams of horrified bystanders. I nearly got sick watching the EMTs coming to collect his body while the white officer STILL had him pinned. I am tired.

These Are OUR Lives 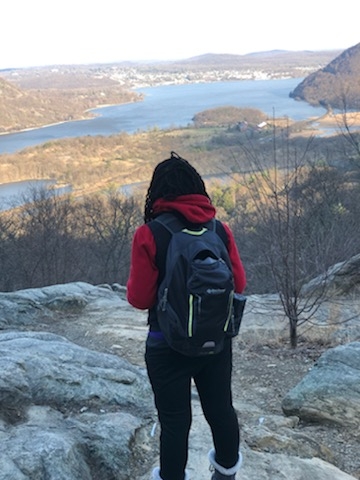 Many think that including race and intersectionality in the Appalachian Trail hiking groups is politics. I am here to tell everyone that this is not politics. This is my life. These are OUR lives.

Black bodies are being slaughtered by the police and state and left in the street to be gawked at. Black women are treated as less than Black men. We are more likely to accept jobs that don’t grant us protections and benefits. We experience higher rates of domestic violence. Gender barriers to healthcare are higher for Black women than white women.

Additionally, we are more likely to be pulled over. I can attest to this as I have been pulled over many times for driving through white neighborhoods. Only to be asked why I am in a predominantly white neighborhood, and if the car I am driving is really mine. Scared to grab the proof. Our inequalities are ignored and our voices are silenced. We struggle in cycles of poverty echoing from slavery and segregation in the past. We inherit nothing from our ancestors but generational trauma, and perseverance. We do not ask for this, but racists take the opportunity to hone in on our weaknesses.

A racist member in the Appalachian Trail Class of 2021 group blamed poverty in my community, by his logic (the “fact”) that 70% of us don’t have fathers in our home as being the root cause for poverty and crime. I addressed him and was threatened to be banned by the administrator, who I also had confrontations with. Every time I have tried to confront this man he denies, deletes, and blocks me or other members who try to take a stand against racism.

Recently, another member tried to write about inclusion and Black Lives Matter. As soon as I made my statement saying I appreciate the post and talk about my life in my Black skin, the post vanished. The admin bans members who are white for speaking out, too.

About an hour after that incident, a different hiker posted “Hikers Lives Matter” and proceeds to ask who will be carrying on the trail as he isn’t “a little bitch.” I have issues with this. Not only is it directly after a Black Lives Matter post, but it was also made to indicate fear. Fear of safety for hikers of color on the trail, who may be alone and have to come in contact with these people and their racist views.

The Appalachian Trail Conservatory has even put out a statement in support of Black Lives Matter, which the Women’s Appalachian Trail posted. Overall, the majority have stood with me, and those stray hairs were cut off. It has been the only group where I have felt welcomed. All is not lost, though, as I have had other members who have observed this discrimination and silence send a direct message to me. Many of their messages are warm and contain apologies and empathy. Many of them want to hike with me more than ever because of the adversity. They want to make a change and take a stand against racism.

This is the Time for Difficult Conversations

So again, I say thank you to those members who are white and trying to have these difficult conversations. Thank you for not invalidating me, for seeing my race and addressing the need for inclusion and diversity on the trail. There should be zero tolerance for racism within the Appalachian Trail groups, admins should be stripped of their titles, and members banned. We need to make these groups a safe space for everyone, not just white members, as Black people do hike. We hike with love, curiosity, intelligence, and a drive that preserves us through the darkest of days.

I hike for every Black woman who has wanted to hike. I hope to pave the way for others like me, that they may have hiker communities in which they are welcomed.

Black women should be able to address their fears and not be silenced by white men and the oppressors. I hope that in the midst of all of the Black Lives Matter movement surging and spreading across this world that we can bring up these conversations. I hope to see hikers of all races on the Appalachian Trail join hands and acknowledge us. Because if you don’t see race you don’t see our struggles. We are not all one. We are not all created equal.