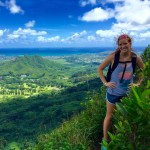 I wanted legs like Beyoncé, to be able run a mile, fend for myself in the big, bad outdoors, and take on an extreme adventure.

These were my original reasons why I was drawn to hike the Appalachian Trail. I grew up camping in New Hampshire during the summers and hiked Mt. Washington more times than I can remember. Every time I summited I would see the dirty, gangly hikers sprinkled throughout the protected walls of the observatory while they were getting a hot meal and charging their devices. Oh how I desperately wanted to be one of them. Although I camped and hiked for years I never backpacked. Ever. So yes, the first night out on the trail, at good ole Hawk Mountain Shelter, was my first night backpacking. For about a year I saved up, pored endlessly over gear reviews, watched every amateur video made on YouTube, and read just about every blog on The Trek to prepare. 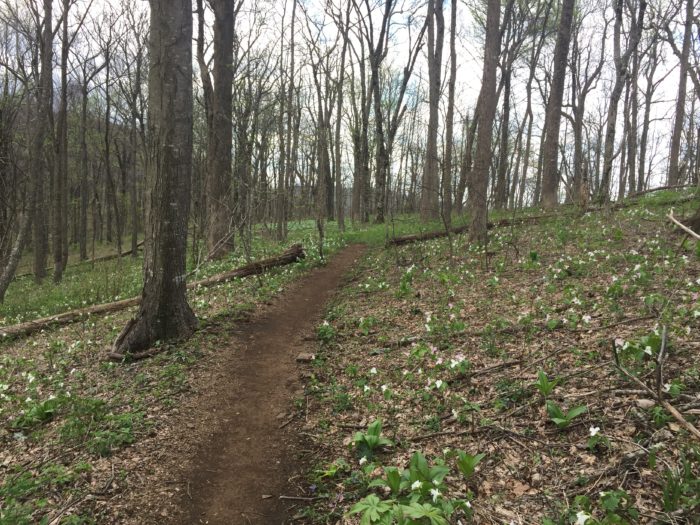 The trail in spring with loads of trillium.

The night before my big, scary hike I did what majority of thru-hikers do and booked a night at a local hostel. It was jam-packed with other thru- and section hikers who were excited for the season to start. I did all I could do so my voice wouldn’t sound shaky talking to fellow hikers. They were so excited to talk about gear, see who had the lowest pack weight, and talk about how many miles they wanted to average per day. All I wanted was for my gear to mysteriously disappear so I could postpone my hike for ten years or so. The morning of my hike I had about two swallows of yogurt and three bites of scrambled eggs that I felt could come back up at any minute. That’s what happens when I get nervous; I don’t eat. I just don’t have an appetite. I was only forcing myself to eat so I wouldn’t faint on the approach trail. What a way that would have been to start my journey. The proprietors had clearly noticed something was up with me because they kept reiterating, “You’ll be fine! Nothing to worry about.” Sureeeeeee, I kept thinking.

I started my thru-hike April 17 and dressed like I was at base camp at Everest. It was cool in the mornings still, especially since we were in the mountains. I figured it would be best to dress in spandex pants with shorts over them, short-sleeve shirt with my long-sleeve tech wick next and top it all off with my puffy. Well, I could have cared less that there was a small gathering on top of Springer and everyone could see me peeling off layer by layer until I could let the heat escape. I was on fucking fire. The mile up to Springer is quite the workout; don’t be fooled. I’m going to blame this poor decision on the fact I didn’t have a proper, full breakfast.

So with the first mile under my belt I would love to say I was skipping down the trail after that. Nope. I was darting my eyes back and forth on the trail – and up in the rhododendron bushes – for my archnemesis: the black rat snake. To say I was scared of snakes would be asking if the pope is Catholic. I made the mistake of looking up what they look like on the interwebs. To my dismay all the photos are of 5-foot-plus snakes, with about half of them in the bushes; yes, you read that correctly, in the bushes at head or face level. I was basically walking down the trail with my head doing a big circle since you had to be aware of all directions for those pesky creatures so you wouldn’t walk directly into them. (Side note: I am happy to say that I am now used to snakes since hiking the AT.)

I reached my first shelter, Stover Creek, around lunchtime. I took my heavy pack off, looked around for snakes before sitting down, and just stared at my food bag. Since I never backpacked before I wasn’t sure what to eat in the sense of what food would fill me up the most so that I wasn’t having a second meal in an hour. I didn’t want to eat too much because Neel Gap (first resupply) seemed so far away, but I also wanted to eat enough to keep my energy up. I ended up eating my first sandwich of flavored tuna fish. I think I’d had one bit of tuna fish prior to the trail and it was pretty comparable to the bottom of a shoe that had been dragged through horseshit. I hate tuna fish. But when you’re thru-hiking you want to eat as much protein and calories as possible but also make sure it’s  lightweight for carrying. So there I was sitting in my first shelter on the AT, eating my “delicious” lunch, and that was when I realized I had actually done it. I was on the Appalachian Trail fulfilling my dream. 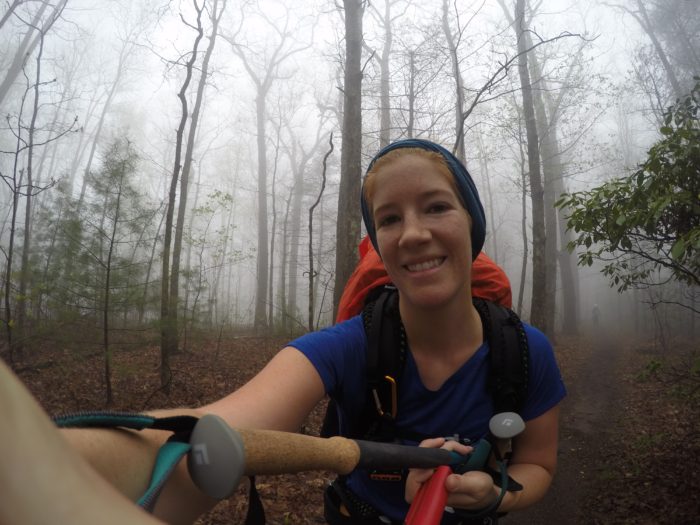 Trying to act cool like I’m not losing my shit.

A couple of hours later I arrived at Hawk Mountain Shelter, where I would spend my first night with about 15 other hikers who were already setting up camp. Now any research you do about starting out on the AT you’ll see warning signs all over the place that alert you to Norovirus that is prevalent in shelters and privies. That’s why hikers never shake hands when meeting. I started to set up my tent behind the shelter but I realized that only two other hikers were in the more than ten-person shelter. My genius thinking figured that it was still cold enough at night during this time of year that any virus would be killed off and that I would be OK and not catch the “Virus-Which-Must-Not-Be-Named.” (Is that how viruses even work? I sure do not have a science degree to actually know.) At dinnertime I decided to make a whole Mountain House packet since it took up a lot of room in my pack. I slowly poured the hot water into the package, and when I was folding over the top of the package it tipped over on the picnic table and some the contents inside spilled onto my sleeve and down my pants. Fabulous. Another hiker at the table was joking around that I just made myself bear bait. So needless to say I beelined it to the stream and washed it off. I did not need to deal with a bear tonight. When it was finally time for dinner I still didn’t really have an appetite and only ate half of the Mountain House. What a waste of food to make a whole one.

I am happy to say that I made it through my first night with no mishap with bears or my bunkmates sleepwalking. Ate my oatmeal and got on my way. About 30 minutes into my walk north for the day I got an overwhelming sensation that I was sick to my stomach. Now I knew that Norovirus couldn’t strike that fast (or should I say, I assumed) so that must have meant that it was just my nerves getting the best of me. I tried to call my dad but he didn’t pick up, so next person to call was my sister. Not a second after she picked up I burst into tears. I was so overwhelmed. Did I plan enough? Did I save enough money? Do I have enough food? What if a bear jumps out of nowhere? Do I have the right gear? Am I even on the Appalachian Trail? The tears were my release button. She told me something along the lines of, “Suck it up, you got this. After all all you’re doing is walking in the woods, not performing brain surgery.” It’s exactly what I needed to hear. As soon as I hung up with my sister I decided to set small, obtainable goals for myself. I wasn’t necessarily skipping down the trail, but I felt better than I had since starting the trail.

My first goal was to make it to Neel Gap. I looked at my bible (AWOL’s guide) and saw that Neel Gap was about three days away where there would be food, people, and hostels if I needed to take a zero and collect myself. (Side note: I NEVER planned on quitting. I knew I could do it.) Well, three days later, after all but running down Blood Mountain, I made it to Neel Gap, where I proceeded to stuff my face with the best egg salad sandwich I have ever eaten and the tastiest root beer I ever drank. I came to learn rather quickly that when you come to a town food tastes 100 times better on the trail than it does in real life. After taking a few hours to rest up and eat, I decided that I would keep going north.

It took me nine days to get through Georgia. The second half of Georgia went a lot smoother than the first half. Georgia will always have a special place in my heart; it was where I became a backpacker. It’s your introduction to the greatest hiking trail in the world. It’s the beginning of a journey that will change your life, whether you realize it at the Georgia-North Carolina border, Mt. Katahdin, or a few months after your trek. At the border you feel like a total badass for after all you just completed one state. Only 13 more to go! You skip into North Carolina feeling like you can conquer the rest of the trail with ease and confidence. 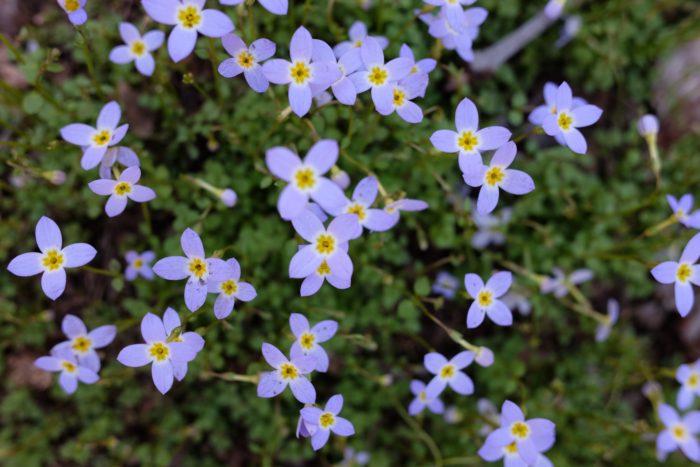 Bluets and Quaker ladies in Georgia.

So, My Advice to Future Thru-Hikers

Take it all in! The good, the bad, the ugly. When you complete your thru-hike, section hike, or flip-flop hike, you will look back at who you were when you started and not recognize that person. The trail teaches you things you never thought possible or even thought of. You will change for the good. So at least once a day, “Stop, look around and listen” (a line from my favorite Vanilla Ice song) to your surroundings and nature (yes, even when it’s raining) for you will notice things that you never have before. 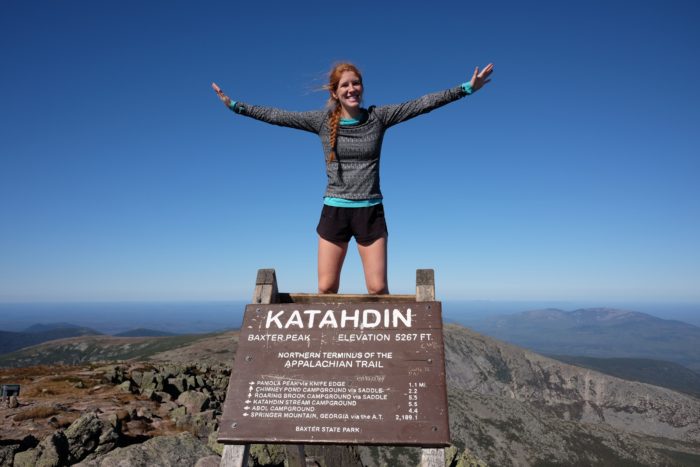 5.5 months after I started I summited Lady K!

I've been hiking as long as I can remember and always wanted to conquer the AT. After spending a year in Hawaii being a beach bum it was time to make my dream a reality. I started off at Springer April 17, 2017 and summited the big, beautiful Lady K on October 2.