This is a sponsored post. The following profile of the IAT Ulster-Ireland is brought to you by Outdoor Recreation Northern Ireland.

Traversing lush coastlines, rugged mountains, and everything in between, the Ulster-Ireland section of the International Appalachian Trail (IAT) takes hikers on a tour through some of the most stunning landscapes in the country. The section’s governing body was established in 2011, and since then the organization has worked towards constructing this 279-mile trail, which runs from west Donegal in the Republic of Ireland to Larne, Co. Antrim in Northern Ireland.

As Ireland’s only coast-to-coast trail, the route traverses every sort of terrain the island has to offer, allowing hikers to get an intimate look at the stunning scenery that covers the country, as well as multiple historic areas and a World Heritage Site. 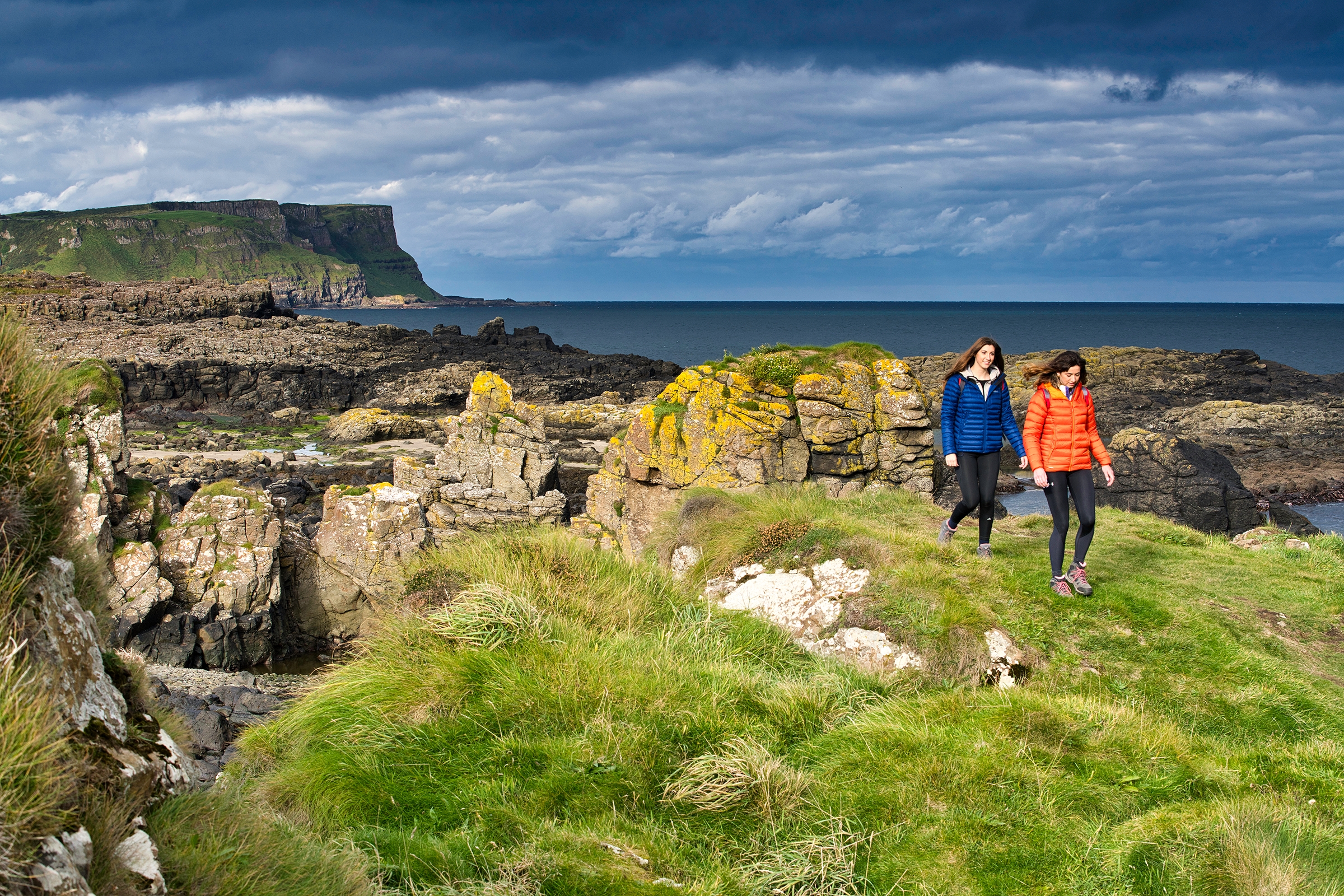 Hikers navigate the rugged scenery of the Causeway Coast, close to the world-famous World Heritage Site the Giant’s Causeway.

US citizens will need valid passports but won’t need visas to visit the country for less than 90 days (again, the hike takes most hikers less than one month). Dublin and Belfast are both reasonably convenient to the trail and have international airports. Be sure to check the latest COVID travel restrictions for Northern Ireland and the Republic of Ireland before making any plans.

There is long-term trailhead parking at both termini, and many thru-hikers opt to park their vehicles at their chosen start point and use public transport to get back to their car at the end of the hike. Alternatively, iatulsterireland.com has a list of multiple shuttle drivers and private companies that can help with thru-hike logistics. 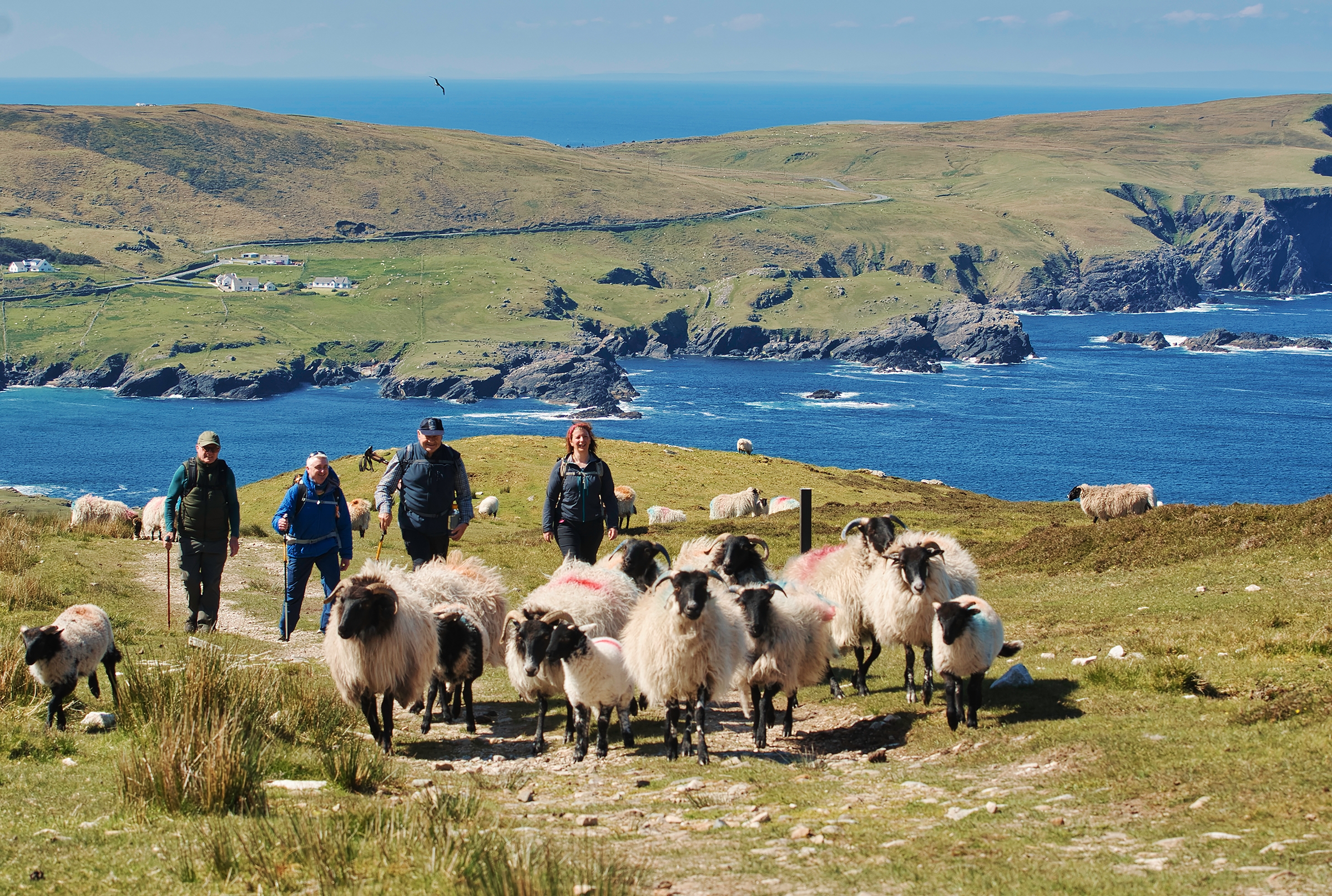 Near the Napoleonic Signal Tower outside Glencolumbcille.

Although the trail can be walked either westbound or eastbound, most people start their hikes in the west. Geographically, the IAT begins at the Northern Terminus of the Appalachian Trail at Mount Katadhin in Maine and runs west to east. The IAT Ulster–Ireland section is therefore generally also considered to run west to east. The western terminus is also more convenient from both Dublin and Belfast. Elevation gains and average weather patterns are similar in both directions, so the choice comes down to a hiker’s preference.

One of the cool things about this section of the IAT is that it’s relatively unknown to the thru-hiking community. Hiking the trail (which is Ireland’s only coast-to-coast walk) offers a unique experience without the massive crowds found on other trails. The trail’s shorter distance also means that a thru hike can be achieved in under a month.

Additionally, the trail travels through any sort of terrain you could dream up – from the epic cliff faces of Slieve League (one of the highest accessible cliffs in Europe) to the beautiful greenery and woodland of the Sperrin Mountains to the world-famous geological wonder of the Giant’s Causeway Coast, and on through the Glens of Antrim. The trail crosses borders, brings you through historical sites, and gives you a real taste of both Ireland and Northern Ireland. 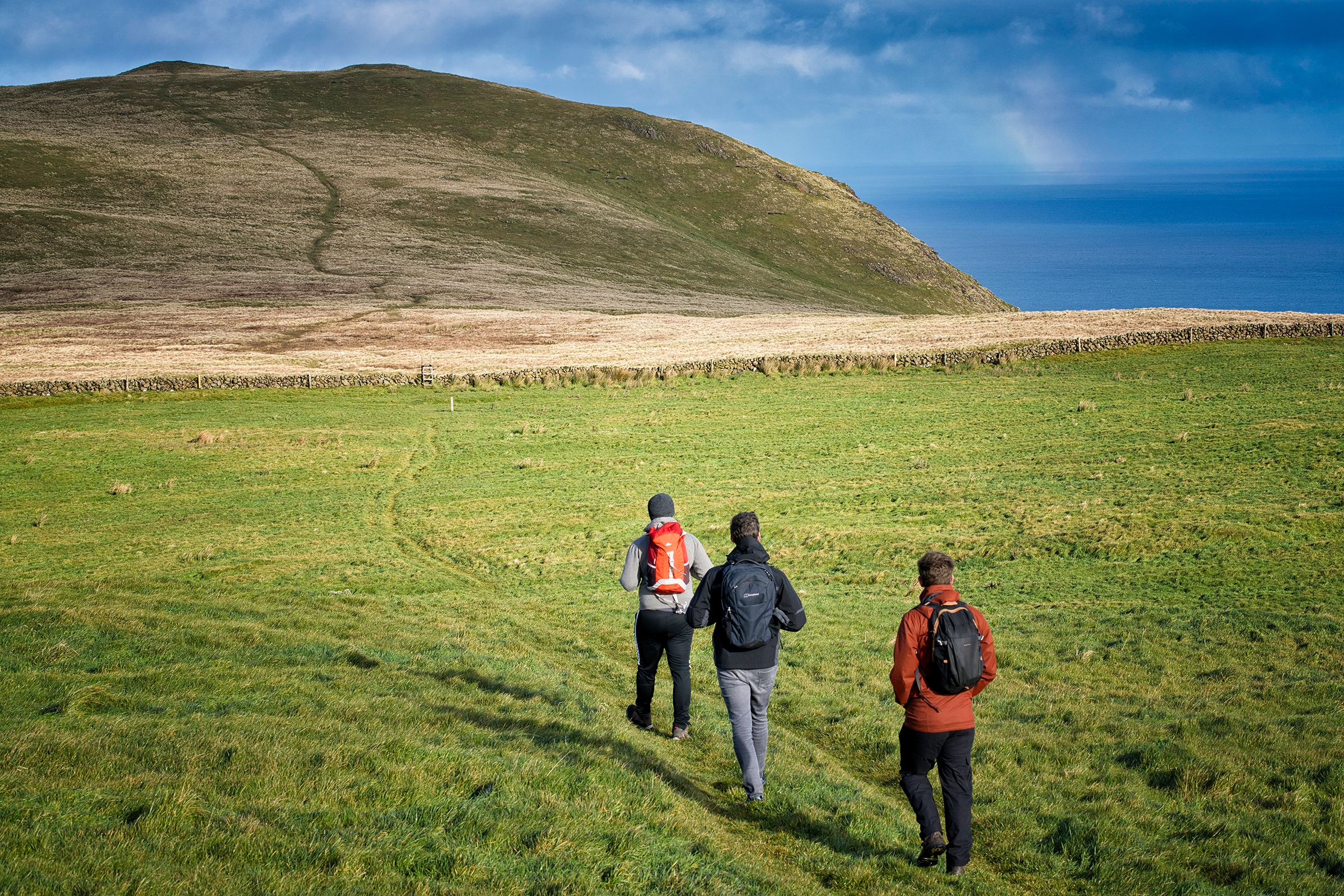 Walkers approach the peak of Scawt Hill, a climb that includes stunning views of Scotland on a clear day.

The Island of Ireland is home to cold, rainy weather, and hikers on the trail should expect things to be damp. The climate along much of the coastal region is oceanic, with cold, rainy winters and mild, relatively rainy summers. The spring and autumn are usually milder but can be windy and damp. On average, the warmest and “driest” months are June, July, and August, while the coldest and wettest months are December, January, and February.

Most hikers will opt to hike in the summer months, although all seasons will be wet and somewhat chilly. Average summer highs are around 65°F, with nights dropping even colder. Cloud cover is common, and winds are often strong and consistent. The summer months will occasionally get a few straight days of sunshine, but aside from that expect the weather to be cold, damp, and cloud-covered. One thing to note is that although Ireland receives significant rainfall, most storms only bring consistent light rain instead of downpours.

Gear Suggestions: Hikers on the trail should plan accordingly with rain gear and durable waterproofing on jackets, tents, and dry bags. The terrain is often wet and rugged, and spare dry clothes should be brought on all overnight trips. The area is also known for being cold and windy, so extra layers – especially windbreakers – are ideal during all seasons. 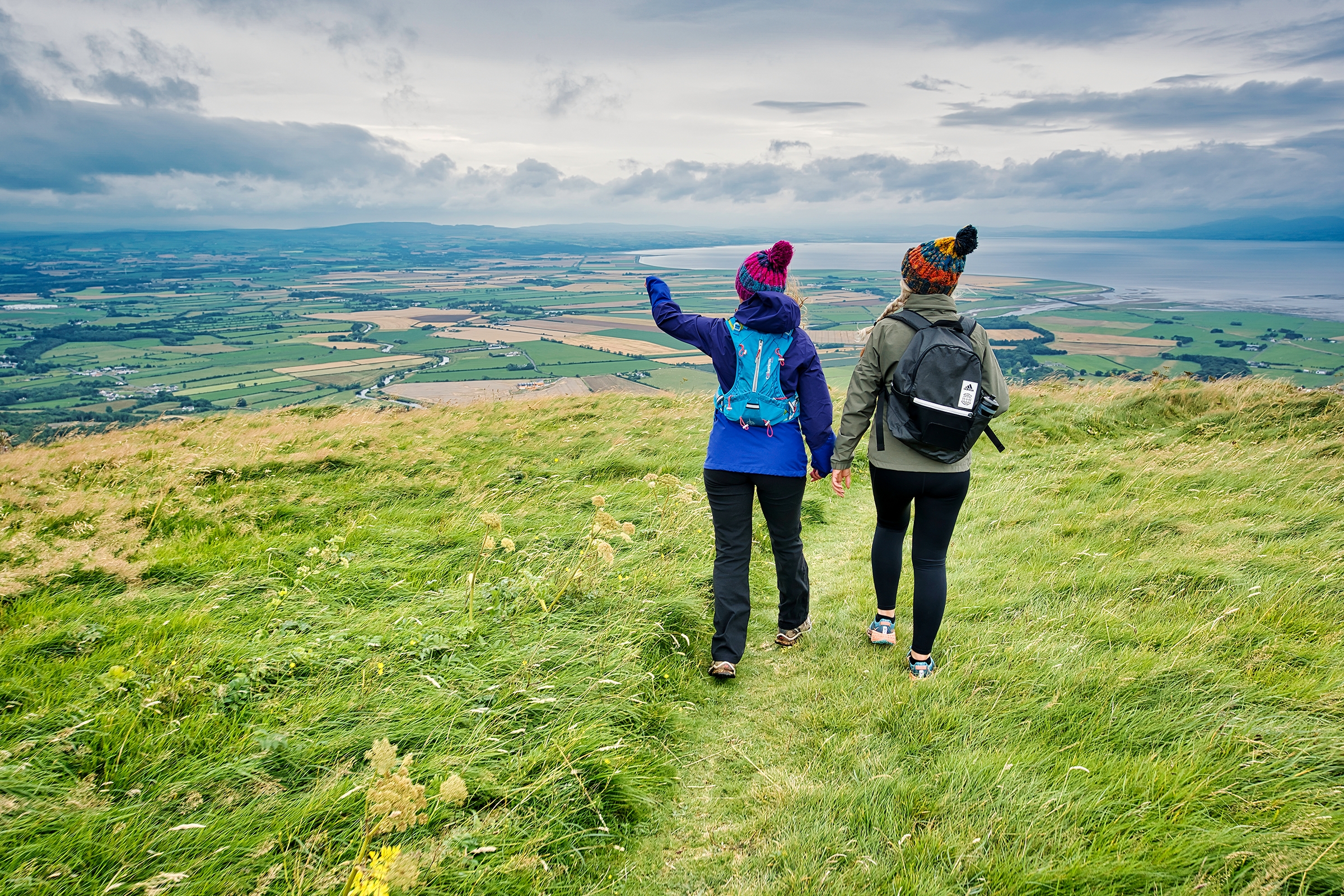 At the top of Binevenagh Mountain, Co. Londonderry.

Overnight camping is only permitted at designated sites along the route. On average, campsites are located between 25 – 30 miles apart, but can be much closer together in certain sections, such as along the north coast. Although campsites are sometimes located further apart, most are large and able to accommodate multiple parties which helps minimize competition for spaces to sleep, and all camping areas are within a reasonable distance to a water source. There is no official list of campsites along the trail, but websites such as campsites.co.uk can help with researching and planning for your hike.

Overall, the Island of Ireland is abundant in water, and mountain streams are common. The trail passes beautiful, clean water sources frequently, although most hikers still opt to filter from all natural sources as there could be a village or farm out of sight upstream. Additionally, the trail frequently travels near towns that have access to clean water, and all designated campsites are located close to a reliable water source.

With the Ulster-Ireland section of the IAT requiring around 24 days to finish, most hikers opt to resupply along the route. There are frequent towns along the trail. However, the two areas where towns are more sparse are in Co. Donegal coming over the Bluestack Mountains and into Co. Tyrone (Killeter will be the first village along the route here) and in east Antrim when coming through the Glens. Hikers can stock up at Glenarm, however, and should have no issue getting by on supplies between there and the next town. Other than that, towns are frequent (the route often goes right down the main street) and hikers shouldn’t have to carry more than a few days of food at a time. 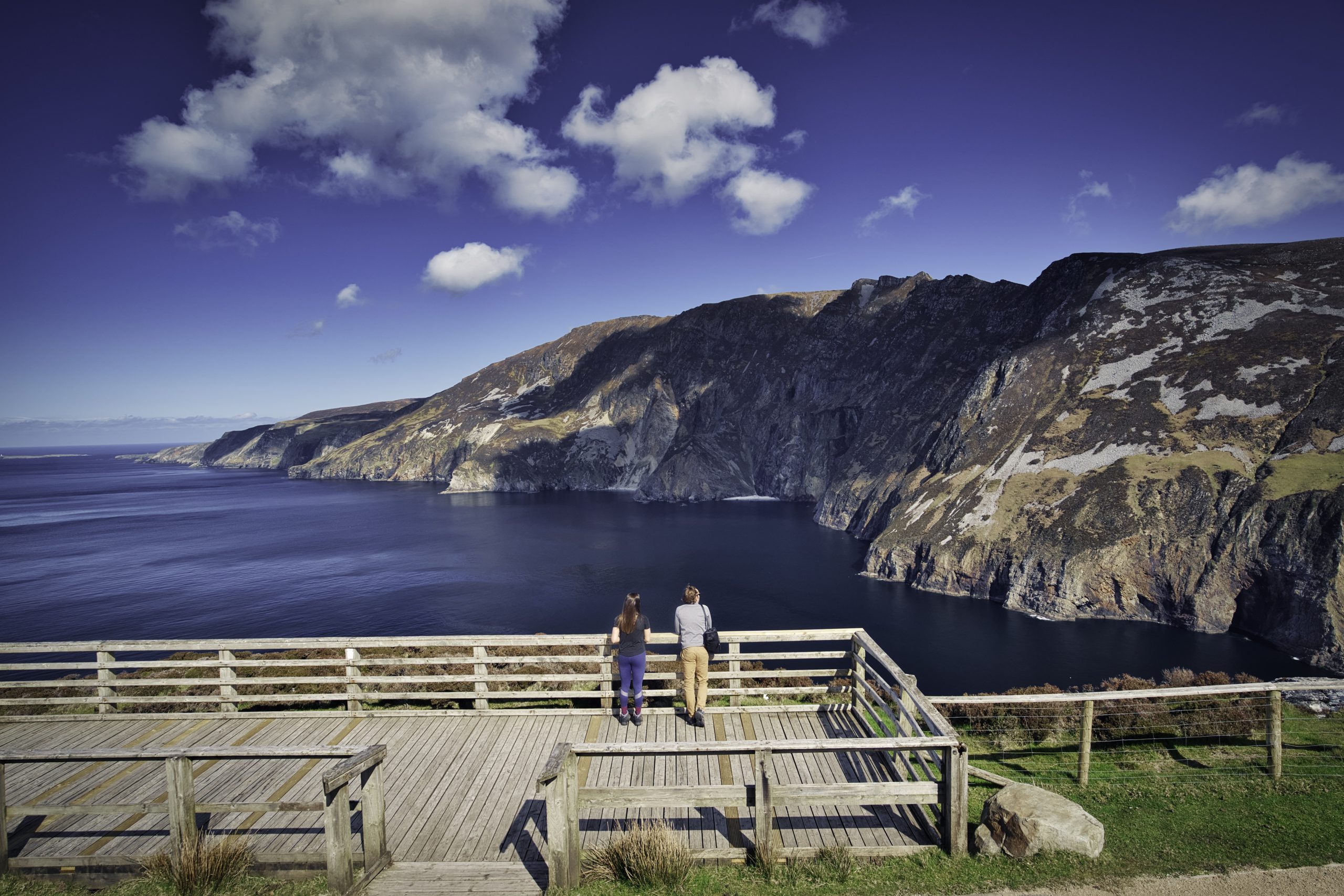 The IAT Ulster-Ireland offers stunning views that rival those of the world’s most scenic long trails. One-of-a-kind coastlines, rolling hills, and lush green forests cover the Island of Ireland, and hikers are truly immersed in the lesser-known parts of the beautiful countries the trail travels through.

The trail is challenging, with constant elevation gains and losses, but hikers are rewarded with an intimate opportunity to learn about the geography, biology, and history of the area. If you’ve been wanting to visit Ireland and discover more of its history, there is no better way than by hiking its only coast-to-coast route. 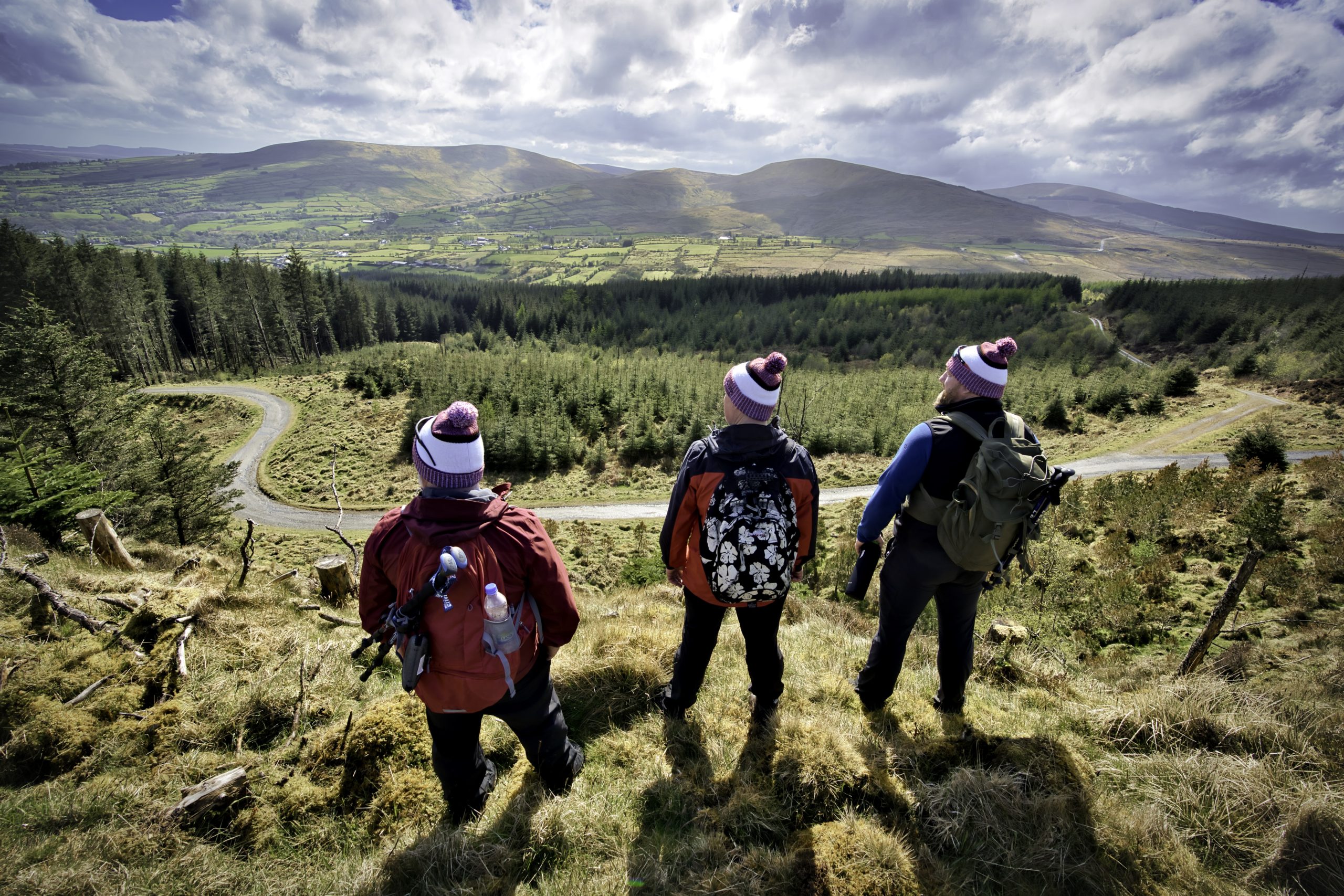 Hikers take in the view of the Sperrin.