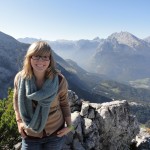 She helped me get started on my dream to thru-hike.

Well, not as much as you might think. In all reality, she just gave me what I thought was the proper venue. We were sitting in The Lady & Sons (Paula Deen’s delectable restaurant), enjoying our Spring Break with my older sister and her husband, when I announced to my family that I was thru-hiking the Appalachian Trial alone in the Spring of 2015. 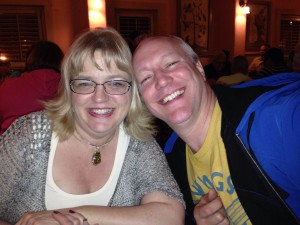 My adorable parents at The Lady & Sons. They’re smiling because I haven’t announced I’m hiking the AT yet.

It had been on my mind for a while, and I figured that saturated with her pancake-like biscuits was the best mentality for my family to accept this news.

Questions, concerns, judgments, and critiques flew out of their mouth (along with some of those biscuits, which was kind of sick). My mother went into a state of hysteria that I’m still pretty sure isn’t over, my youngest sister scoffed, my father began asking me logical and practical questions that I had absolutely no answer to, and pretty much nobody took me seriously (the one drawback of being a practical joker). But through it all, there was one overwhelming question that was on everyone’s mind: WHY?

Let’s back up a bit:

Like most great stories, my NOBO thru-hike story starts with a tragic tale of love. Ah yes, let the eye-rolling, groaning, and judgment begin. To spare you, I’ll sum up: girl meets boy, girl and boy date for 4 years, girl dreams of wedding bells, girl gets cheated on months before college graduation, girl hates life and has no idea what to do with herself.

Now, don’t get ahead of yourself, I’m quite able to make a life for myself and don’t need a man to have a meaningful life in this world (and the women in the crowd shout AMEN). However, you have to understand my perspective. I was fortunate enough to spend my college career in Tennessee at a small, private, Christian university that produces many well-rounded scholars as well as…well, to be frank, it produces a lot of marriages. Leaving this school without a spouse is not necessarily the norm. So let’s imagine a cynical girl who is secretly scarred and trying to mask her pain (I’d like to think it was secret…probably wasn’t) amidst gobs and gobs of friends who were all getting their ring, diploma, and marriage license all in that order and within less than a year. And that was it. That’s the dream, folks! And at the time, it was mine too. 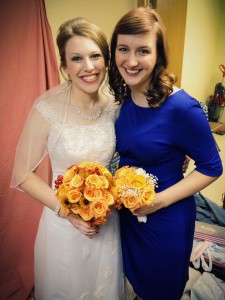 My best friend and I on her wedding day. She’s one of the lucky ones who found a keeper. Probably because she is clearly flawless.

One major appeal is that they had their life planned out for them. They knew where their husband was working and therefore where they needed a job, they knew where they would live (presumably not with their parents), they knew that even if things were uncertain, they’d at least have another person they loved beside them to make fools of themselves with together. Meanwhile, the ultra-hyper planner that I am, I’m over here with the thought, “What else can I binge-watch on Netflix?” at the forefront of my mind. I didn’t know where I would end up, where I was to go, and who I would be around. Never did I once begrudge their happiness or their security, but I did feel a little left out and much more than a little concerned about my own future (which was looking something scary like living back in Indiana with Mom and Dad).

Where does the AT fit in all this?

So there I was floating in a whirlwind of uncertainty, insecurity, and just overall bitterness at my situation. I had a host of doors wide open in front of me and I was really just too scared to pick and commit to any one of them. Then, an old conversation between my ex-boyfriend and I from years past resurfaced to my thoughts (Note: names have been changed to protect the integrity of the individual):

*After first being introduced to this adventure known as the Appalachian Trail*
Me: Hiking the entire Appalachian Trail? That sounds incredible!
Voldemort: It sure would be!
Me: Maybe that could be something we could do together sometime in a few years. Seriously, that sounds like an amazing adventure. I would love to do that.
Voldemort: Are you sure you would want to do that? I don’t know if I could see you really wanting to be out there for the entire thing. It’s pretty challenging, probably more so than you think. *patronizing pat on the leg* Perhaps we could do sections first.

We never really spoke of it again.

Given my confused, uncertain, and befuddled thought process at the time, it really makes sense that within minutes of reminiscing, of course I would decide to hike a little less than 2200 miles. Of course. This brings us to Paula Deen.

The aftermath of my announcement: a partnership

My mother occasionally suffers from anxiety and panic attacks. I’d like to think that I’ve never been the cause of one of these but…well let’s just say I knew something must be done in order to make her a little less nervous about the situation.

Enter Barkley: one of my favorite people to be around. Why? Because she’s the coolest person alive. I wish that there was a better word to use but cool is really the most accurate. Barkley does, says, makes, and wears things that make you step back and say, “Wow! She’s so cool!” She’s the person that makes you analyze the way you live your life so you can be cooler. Easily one of the most intimidating people I’ve ever met, because she is so doggone cool. The best part, she has no idea (I hate for you to find out this way Barks, but…). We met during our time studying abroad in Europe together. Of course, hiking the AT has been one of her lifelong goals as well (I told you already, she’s the coolest person ever). In fact, at this point, we had joked a few times about how we would graduate and hike the AT together. We would discuss our “realistic” future options (getting a job, paying student loans, etc.) and then always say, “Of course, we could hike the AT together…” and then laugh because that was a foolish option. But then, somewhere along the jokes, it became every bit as “realistic” as finding some job in some place because you had to. Those “realistic” options soon became the foolish ones: giving us nothing but a life of drudgery, repetition, and aimlessness. 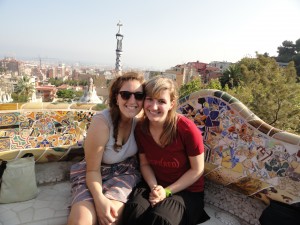 Barkley and I exploring Parc Guell in Barcelona Spain.

It didn’t take long for us to come to the decision that this was something we needed to do together. Sitting in my apartment one night, we talked through some of the finer details and realized: we could actually do this. It’s scary when you have your dream right in front of you and just have to reach out for it. But we knew that years from now, with our comfortable lives, potential families, and dusty dreams from years past, we would always regret not taking this chance now. And that’s how Barkley and I became partners. As of now, we anxiously await our embarkment on an adventure that begins within a mere 25 days.

So there you have it: my tale. Maybe you think it’s a little cliche and flimsy (scorned ex-girlfriend hiking the AT in spite), possibly a little inconsiderate (young woman sends mother to grave early for selfish ambitions), or even irresponsible (hiking the AT the avoid making life choices and being a real grown-up), but if you had any of those thoughts, then you weren’t going to get it anyways. Because none of those reasons are why I am doing this. I’m doing this simply to satisfy an itch that started from the first moment I’ve heard about the AT. It’s a goal I’ve had for a long time, without even realizing it. Sometimes it takes heartbreak, desperation, curiosity, and even fumbling around blindly in the dark to figure out what your passion is and for me, it’s finishing this trail. For me, the AT is personal, it’s exciting, it’s terrifying, it’s new, it’s overwhelming, but it’s mine. It’s mine to conquer, experience, and escape to and I can’t wait for every single moment, both the good ones and the horribly rainy and cold ones. That’s what my blog will be about: a very inexperienced, excited and exceptionally nervous girl with eyes wide open headed out into something she’ll never regret.

I’ve got many people to thank for helping me with this (and I’m sure many more will come), but for now I’ll keep it simple and thank good ol’ Paula Deen.

Hey I'm Rachel, your average Indiana English teacher with an unusual approach to her post grad years: NOBO hiking the AT. I love reading, guacamole, exploring, and deep-cleaning my car. I hate grammar, know-it-alls, sedentary lifestyles, and coffee. I'm hiking with one of my dearest friends and looking forward to an amazing and worthwhile adventure.