We’re currently in an area called Bierzo, well known for wine and I think other things that I haven’t puzzled out. I asked about this in the tourist information office In Ponferrada today, and didn’t completely understand the answer.

We’re in the autonomous community of Castilla-Leon, no doubt in some province within it (dunno which one now), and Bierzo is a “comarca”, https://en.m.wikipedia.org/wiki/Comarca           Anyway, we’ve been in Bierzo for a couple of days now.

As we approached the town of Molinaseca we began seeing a number of cars and SUVs towing closed trailers from which came a lot of barking. We found more parked in the town itself. A friendly group of hunters, I asked what they were hunting, and the name of the animal was one I’m not familiar with. From later discussion with other pilgrims we think it might be some sort of wild pig or boar. We think their hunting dogs were beagles.

The big thing for this day was taking some time off en route through the city of Ponferrada. In particular we toured the impressive Templar castle, which pleased me since it had been closed when my wife and I walked through here 2 years ago. As we were walking around in it we heard a voice behind us, and it was Cynthia, who we had met two days earlier. Then on the way out of the castle we met again a pair of English/Irish brothers we keep running into. And of course we ran into Heinrich and Gut shortly after. Ponferrada seemed to be just stuffed with Pilgrims. 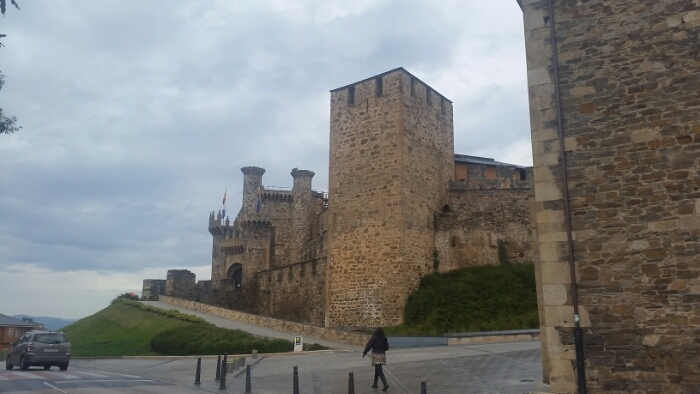 There’s a lot to see in Ponferrada, but our time is limited, so we pushed on to stop at an Albergue in the town of Camponaraya, hiking a little more than 15 miles for the day.

This turned out to be an excellent stop, with no others in our room: a benefit of hiking relatively late in the season. 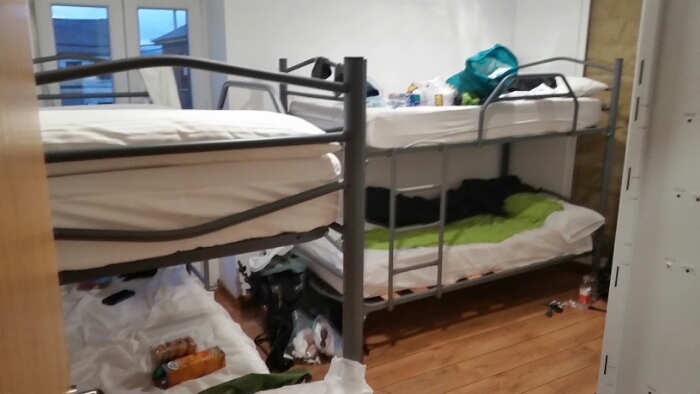 Our Albergue room in Camponaraya

We got our usual start in the dark the next morning, and despite this managed to find and follow an off-highway alternative early on. Later, we had a choice of three routes to walk for most of the day; most pilgrims seemed to pick the easiest route beside the highway (we could look down and see them way below), but we were virtuous and I think wise, accepting about a 2000 foot climb to take a more rural and lovely alternative. We saw only 2 other pilgrims for this long stretch, plus a group of Spaniards out harvesting chestnuts.

We “harvested” the odd one or two ourselves from the track we were walking, shelled and ate them as we walked. 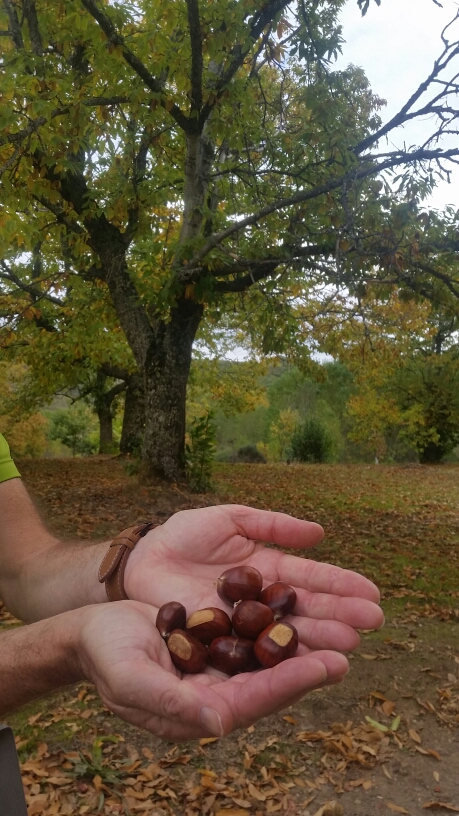 For the past couple of days I’ve been joking with Lucky and Milky that when we got to the start of the long climb up to O’Cebreiro that I would do it on horseback. Because I recalled a number of advertisements along the way offering horseback rides to the top. Towards the end of this day we started seeing these ads. So maybe tomorrow I really will do this because after all (as I keep telling my friends), I’ve already hiked this trail and thus have nothing to prove. And it’s not often that one has the option to ride a horse rather than walk on a hiking trail.    We’ll see (tomorrow). 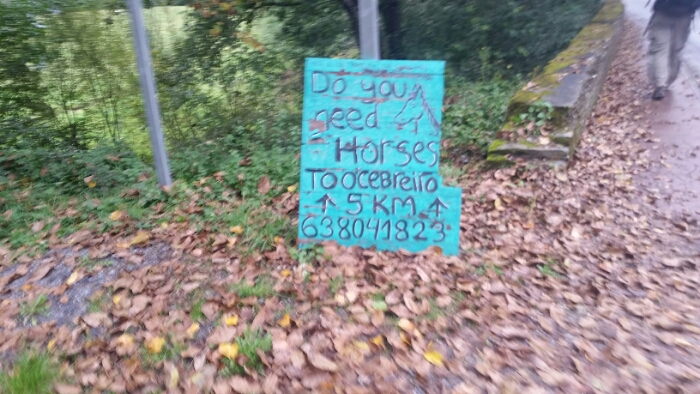 Our plan for the day was to stop at one of two Albergues in La Portela de Valcarce, but we saw no signs for either one. This is the second time this has happened. So it’s good to retain a little energy and a positive attitude in order to be able to push on to the next town.

Which we did, just another 1.4 km. The guidebook listed just one Albergue in town, and this we found, but it was closed for a “day off”. So we pushed on, meaning to hike to yet another little town, but on the outskirts we found an Albergue that has only been in operation for 3 months. A little expensive by Albergue standards, but it was raining a bit, and after 3 previous possibilities hadn’t worked out, we grabbed it.    A very nice place.
For the day we hiked 19 miles, with about 2000 feet of climbing.

Tomorrow we’ll walk out of Bierzo and the community of Castilla-Leon, and into Galicia, the northwestern corner of Spain (north of Portugal).