In the Heart of Maine

The hundred miles between Rangeley and Monson have been some of the wildest and most beautiful of the trail. The sharp edges of the Mahoosucs have given way to gentler terrain, as the path carries you from one lake to another. Mountain ranges rise up out of the forest like the crests of waves. It may not be the ‘Hundred Mile Wilderness,’ but it’s close. Civilization reaches the heart of the Maine woods as a distant echo.

I started the week with the last big set of 4000-foot peaks before the final ascent up Katahdin. Over fifty miles, you climb four ranges, one after another — Saddleback, Sugarloaf, Crocker, Bigelow. 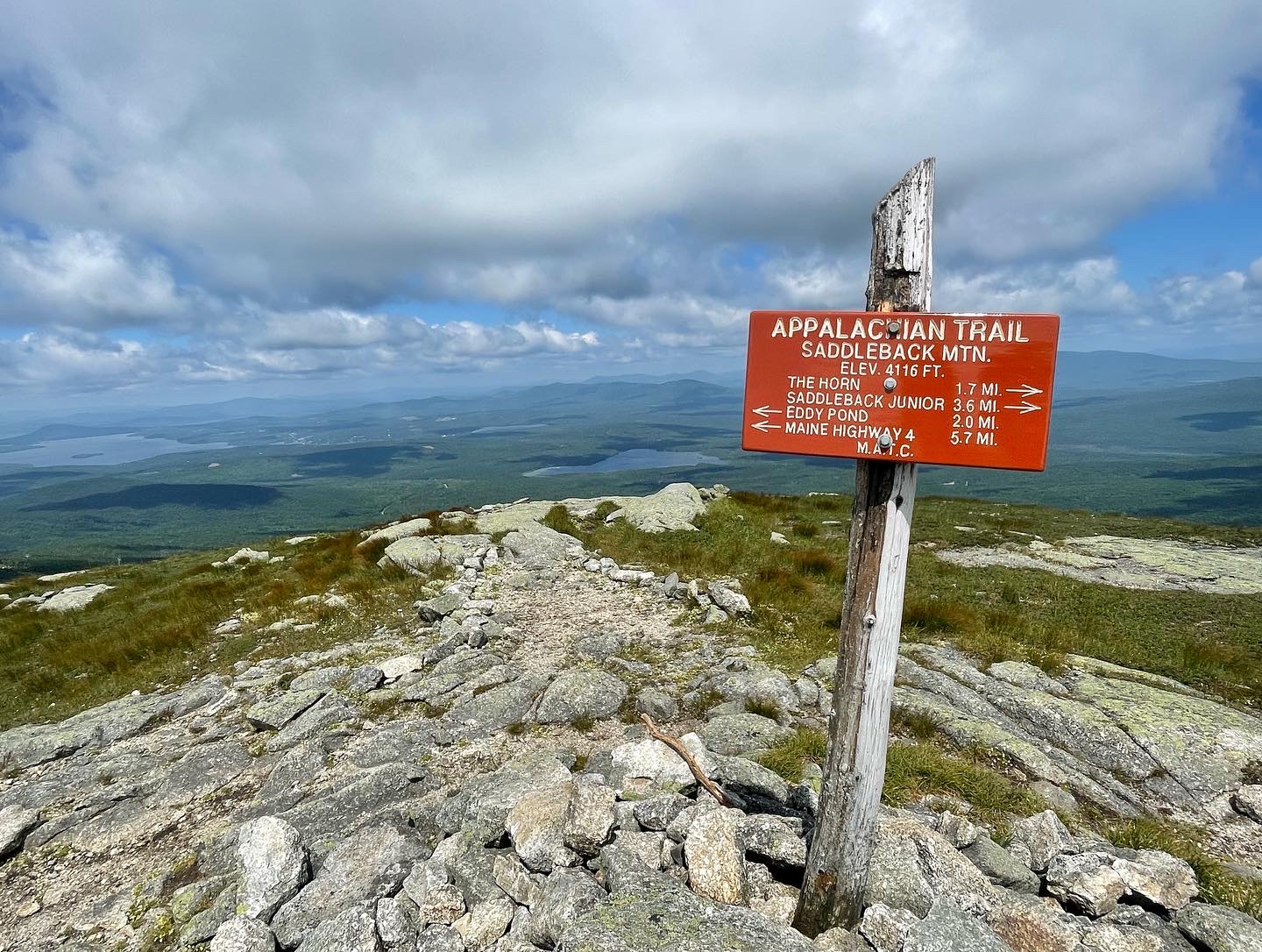 Saddleback is the first of the big mountains, and it has the best views of them all. I ascended it on a clear summer day, starting fresh from my zero in Rangeley. At 3500 feet you break through the treeline and emerge onto a bare alpine ridge. For nearly three miles, between the summit and the Horn, you remain above the trees, walking on top of the world with a maze of lakes to your left and a sea of low, undulating mountains to your right. Apart from Rangeley far below, a few specks of houses along a lake, there are no towns to be seen. You are alone with the land, moving through the sun and the breeze.

Sugarloaf is the next big range, after the deep steep valley of Orbeton stream. This is highest peak in Maine after Katahdin, even though it’s shorter by a thousand feet. The trees go almost all the way to the top, but the summit is a bare rock studded with radio towers. Down below you can see the ski slopes lacerating the mountainside, and the dingy hulk of a ski lift a few feet away. And, across another deep notch, the twin peaks of Crocker Mountain.

I’d had excellent weather up until that point, but as I descended Sugarloaf the sky darkened and it began to rain. The drizzle turned into a downpour as I struggled up the steep slope to South Crocker. It was one of the most miserable times I’ve had on trail, and I was crawling up that hill at half my usual speed.

At the top, the rain stopped, and I decided to cheer myself up with a cup of hot tea. Mile 1999.9. But as I took the first few sips, the sky went black and a wind picked up. I had to dump out my tea and frantically pack as the thunder and lightning swept in with a torrent of rain. My phone was so wet I could barely use it at all. 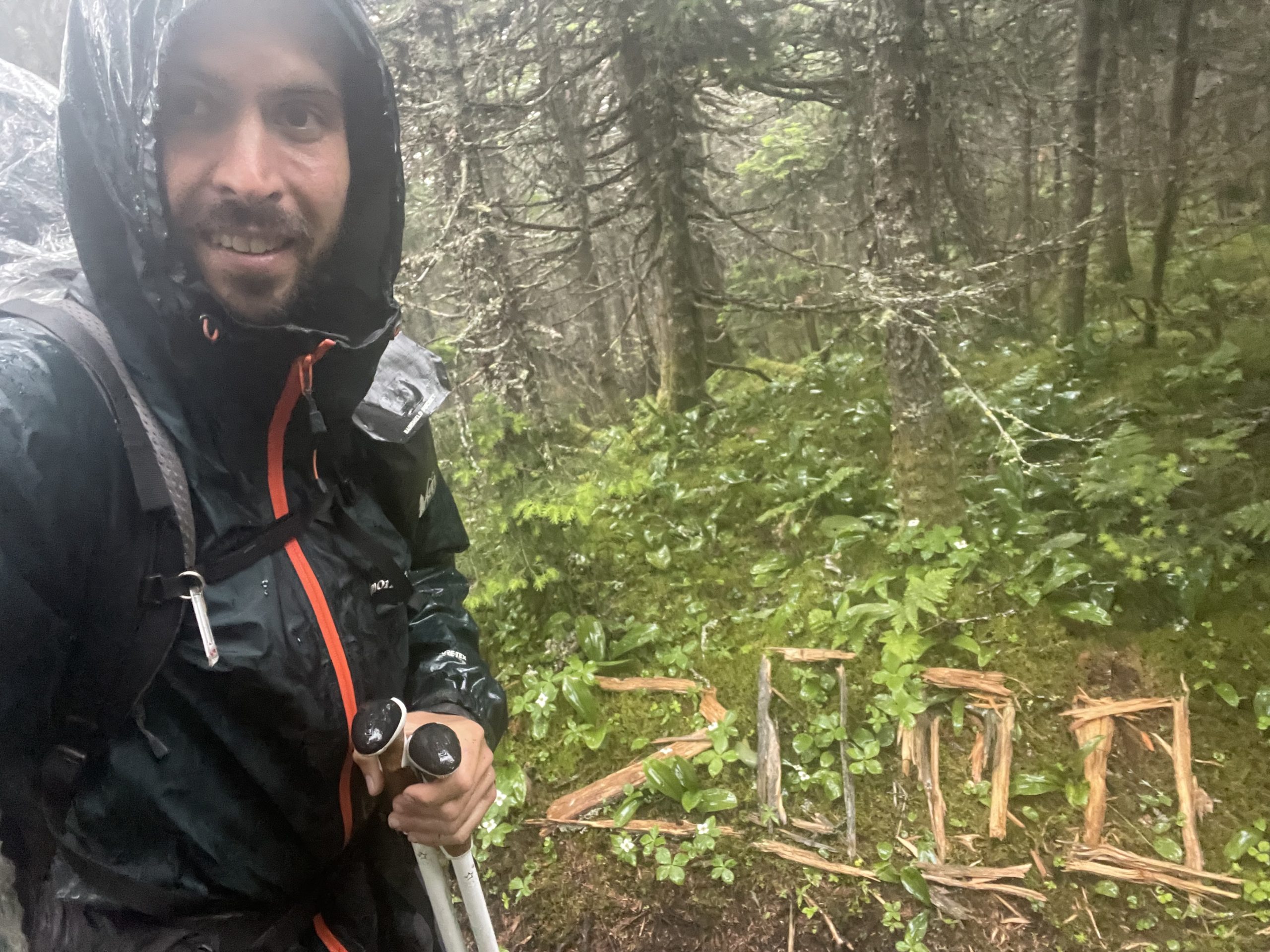 Two thousand miles in the rain!

And so it was in the middle of a thunderstorm that I reached 2000 miles. I was able to get one picture, one blurry, rain-streaked piece of photographic evidence that I’d made it this far. That even though I had nearly 200 miles left to walk, I had walked a thousand miles twice over, here on South Crocker Mountain in the rain.

And then I kept struggling on, over the mountain and down the hill to Stratton as the rain tapered off and the sun came out.

Stratton and the Bigelows

Stratton is a tiny town with a big hostel. The Maine Roadhouse, run by ‘the two Jenns,’ is a brand-new, well-provisioned place on the side of a highway a few miles out of town. They came to pick me up in a big yellow school bus, which they’d just got up and running to drive their hikers around. 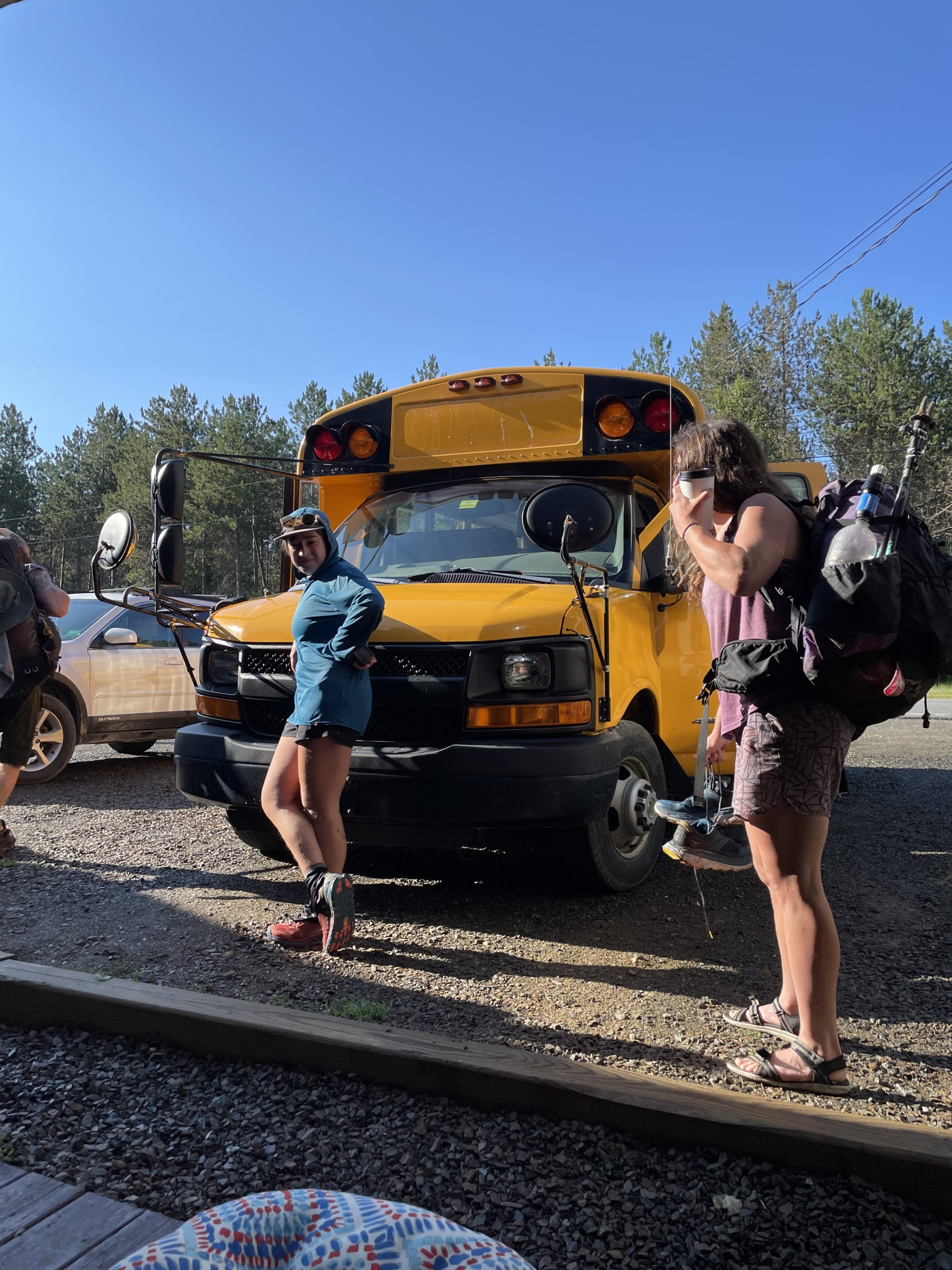 Waiting for the bus at the Maine Roadhouse.

I spent another full zero there, doing some Trek stuff on Instagram (thanks to everyone who joined my live stream!) and hanging around town. There’s a general store, a small grocery, a bar, and a post office. Everyone seems to know everyone. The police chief hangs out at the parking lot and does trail magic. And the breakfast at the hostel is amazing.

Late the next morning I was back on trail, climbing up that last big mountain range. The Bigelow Range soars three thousand feet above Flagstaff Lake, and has alpine views at the summits to match Saddleback. It was a sunny Sunday, and all the day hikers were out when I first arrived. Then I descended from Avery Peak (named for a founder of the Appalachian Trail) and was suddenly alone — they must have come down a different way. Since then I’ve only seen overnight hikers on the trail. 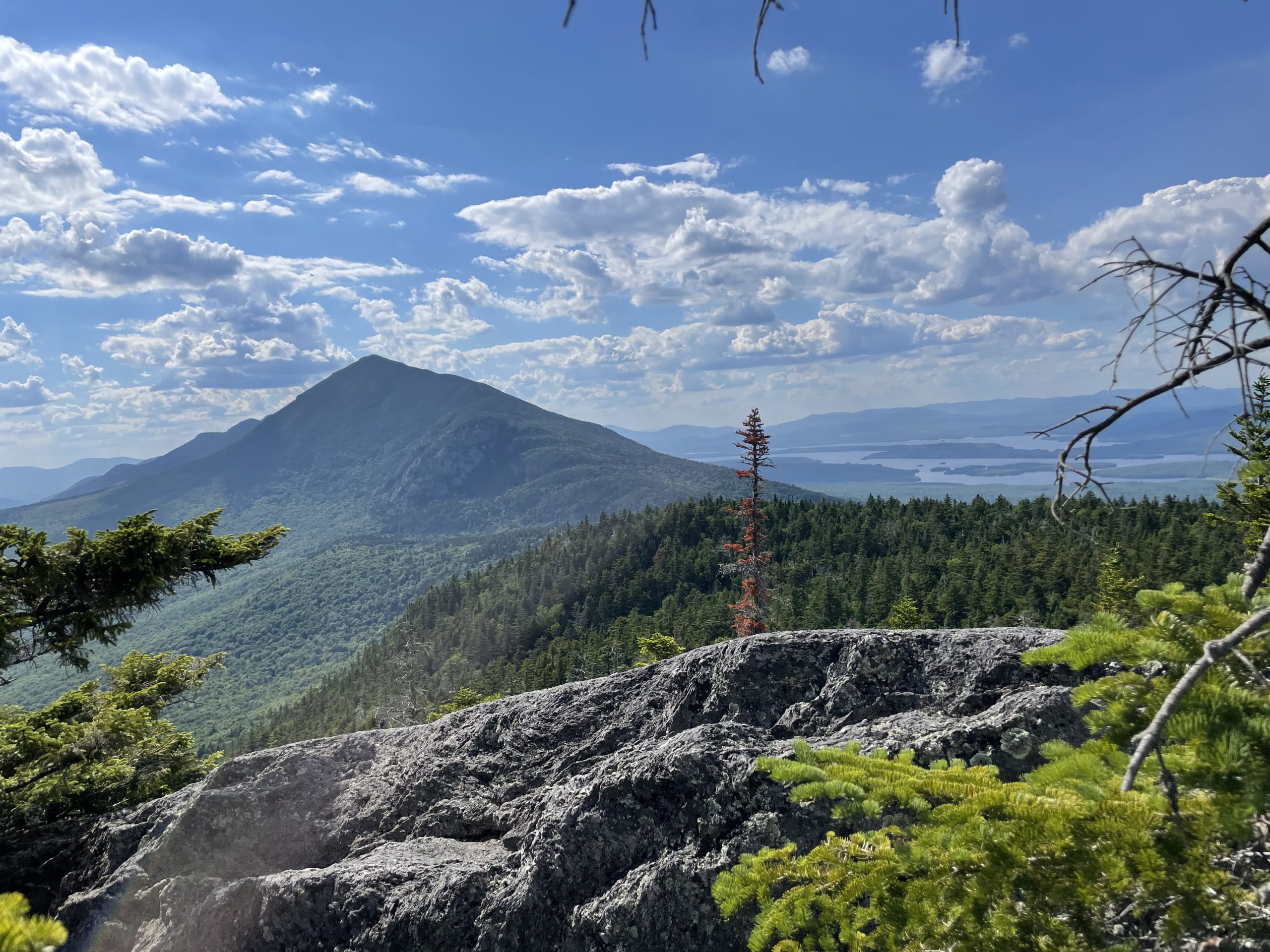 Looking back west at the Bigelows.

The trail came down from the mountain to the east shore of Flagstaff Lake, a huge body of water that felt like an inland sea. I could hear falcons crying in the distance as waves lapped against the shore. Then the path threaded eastwards through the trees to the Carry Ponds, an old portage route between rivers that hopped between small lakes.

At the West Carry Pond, I saw the first loon bobbing out on the water. There would be many more to come, and I’ve come to expect their otherwordly cry in my ears as I drift off to sleep. I swam for a while in West Carry Pond, at a narrow sandy beach full of driftwood. Then I moved on to the next pond, and the next. 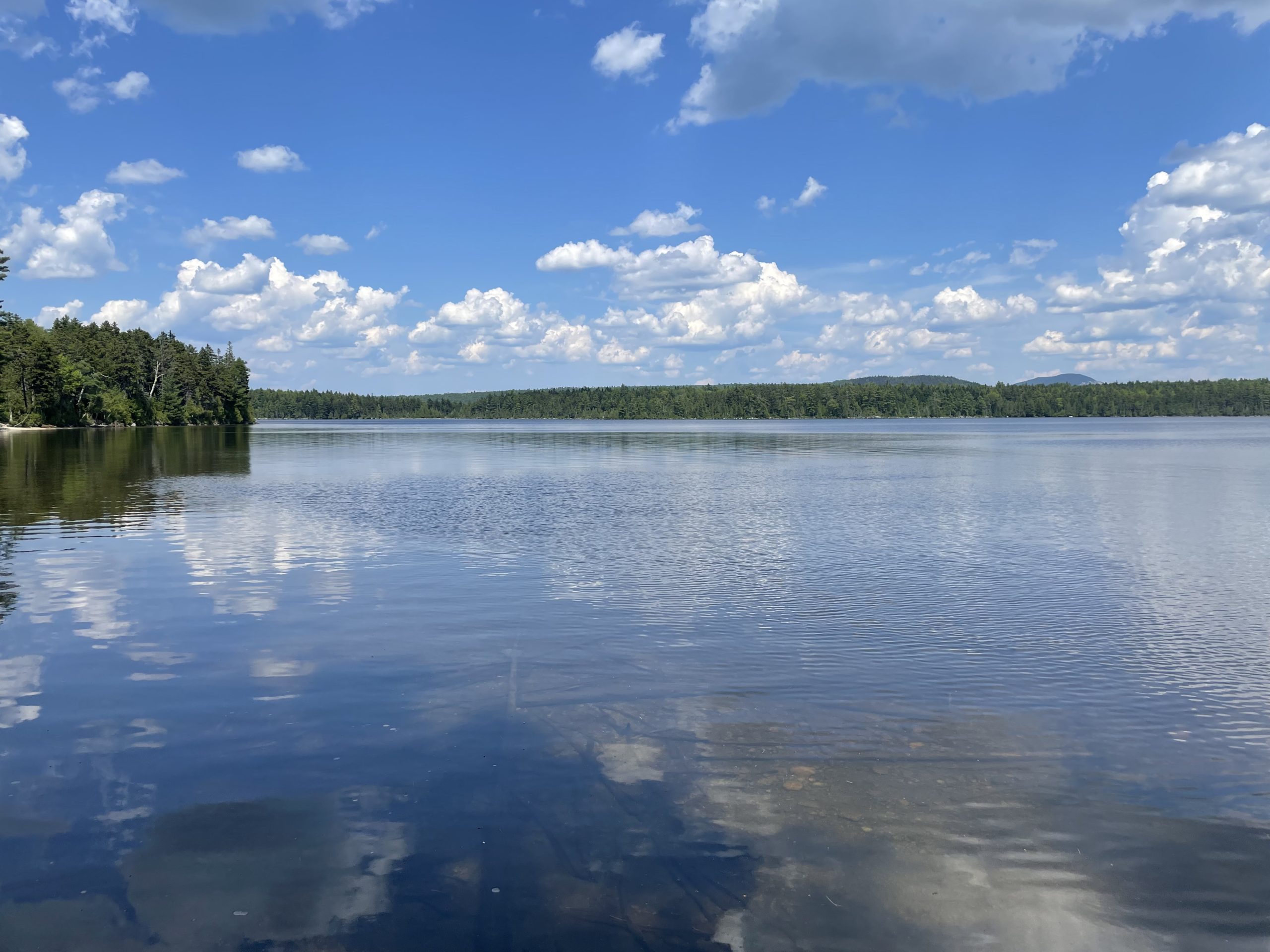 At the end of the day I approached Pierce Pond, where the ‘attack hawk’ was reputed to live. I was afraid of this bird, which had injured several hikers by diving down on them from the sky with its fierce claws. She was protecting a nest nearby, and I suppose goshawks aren’t good at learning that hikers aren’t a threat. 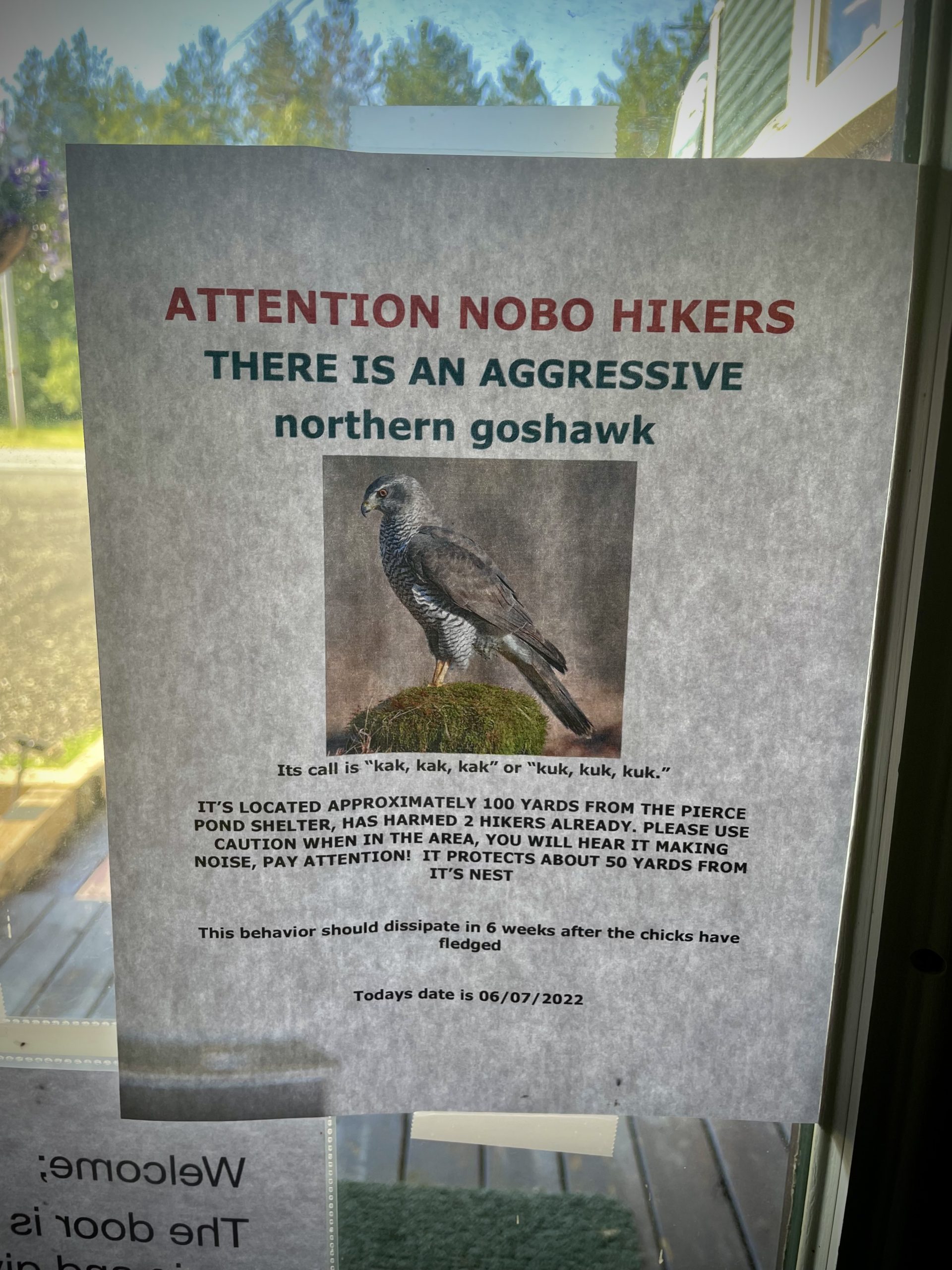 I tied my hat to my pack, crossed my poles over my head, and jogged on through the area as quickly as I could. I got lucky — there was no sign of the bird at all. Maybe it’s late enough in the season that she’s done guarding her nest. Or maybe I was just very lucky.

Three miles past Pierce Pond lies the Kennebec River. Unlike other rivers on the trail, the Kennebec cannot be bridged or forded. The only way across is on a boat.

A ferryman guides a canoe back and forth across the wide stream, taking hikers across two at a time. The passenger in front is given a paddle to help the ferry along its way. And you have to abide by the ferryman’s schedule, so you can’t cross before nine. 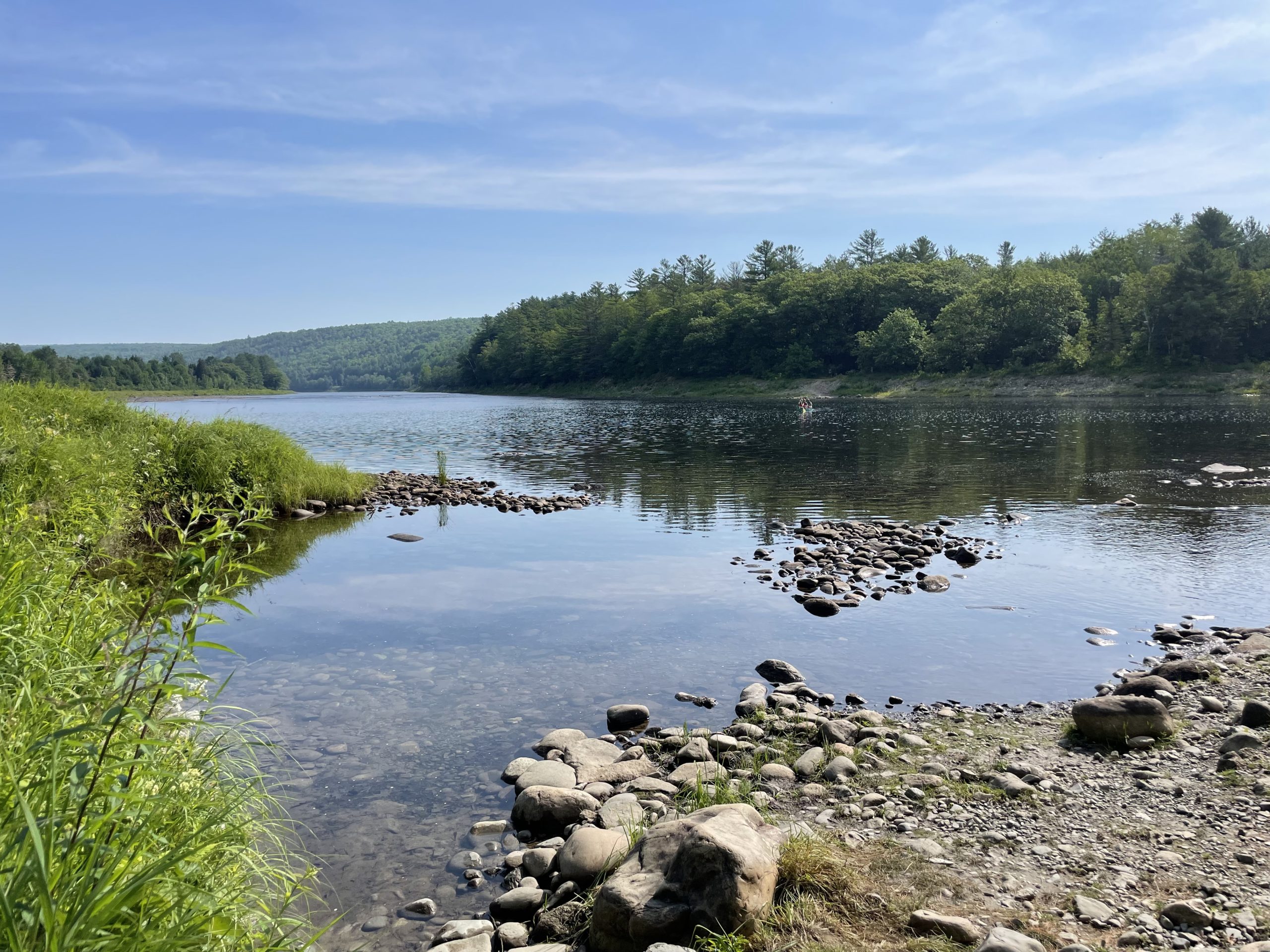 Instead, if you’re going north, you can eat breakfast at Harrison’s Camp, an old-fashioned hunting lodge a short walk from Pierce Pond. There’s a dusty moose head on the wall next to a pool table, and a generator hums in the shed next to the porch.

They make some of the best pancakes on the trail, with rich wheat flour and slices of apple cooked in.

After breakfast, you walk down a cascading brook to the river, which opens up suddenly out of the rocky woods as a wide marshy clearing. And then the canoe comes gliding across the stream to take you over.

On the other side, there’s a road, and a little bit of a town a mile off. I didn’t stop to check out Caratunk, but kept on going into the woods beyond.

Back to Big Miles

That day, I was determined to break the ‘low-mileage curse’ that had been following me since the Whites. I hadn’t gone more than 18 miles a day for almost three weeks. So I walked on past another lake (Pleasant Pond) and over another mountain (Pleasant Pond Mountain), hoping to prove that I could do more miles in Maine.

I watched out for the aggressive grouse I’d been warned of, but it never showed — I found out later that a Québécois hiker named Pop Tart had whacked it with his poles. At some point the weather turned and it began to rain again, but I just kept on walking. Moxie Bald Mountain was a miserable, windy, wet slab of rock, but I made it over. And on the other side,  twenty-two and a half miles from Pierce Pond, I called it a night. 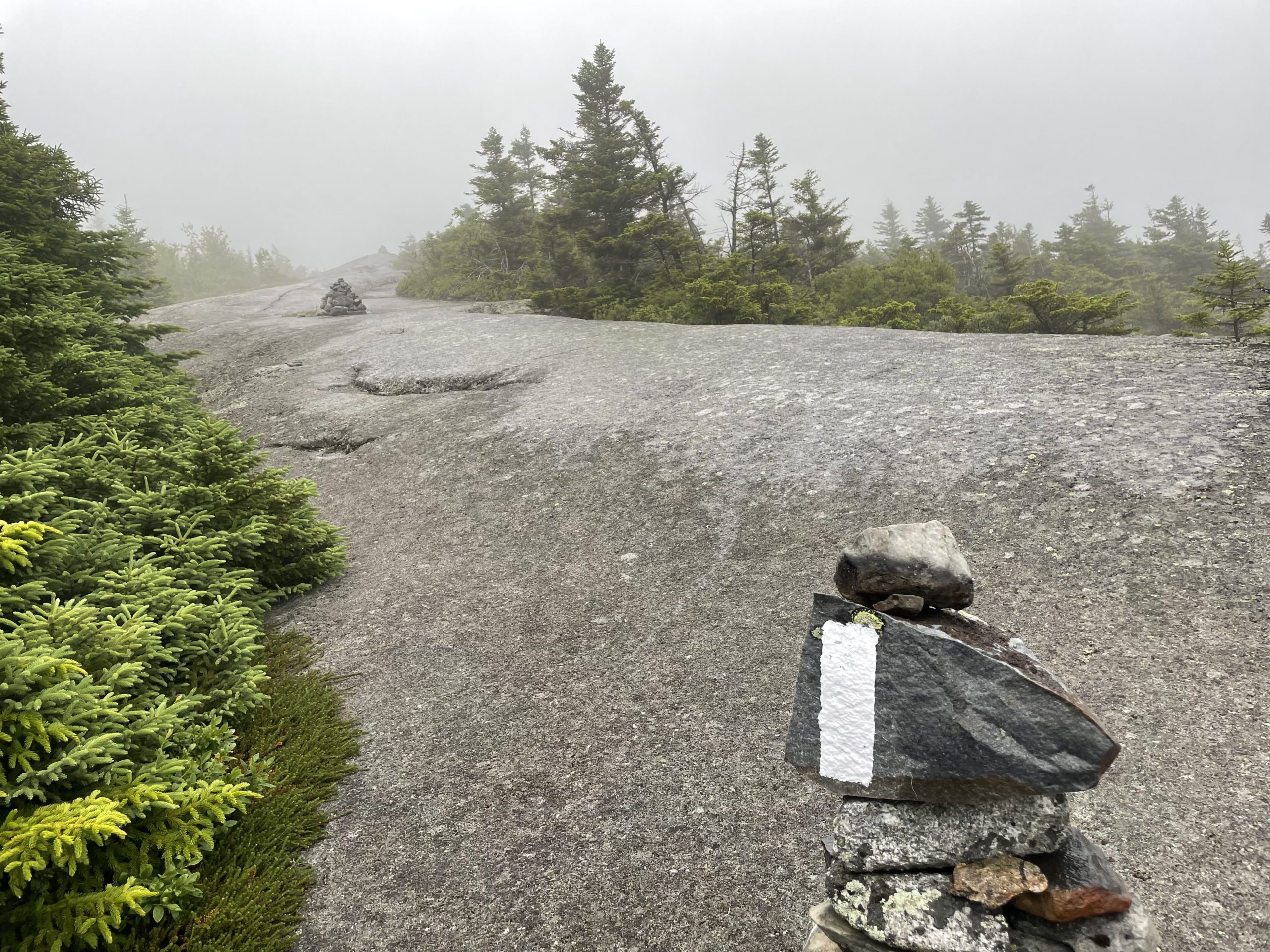 Bald Mountain in the rain.

I walked eighteen soggy miles after that, down along the Piscataquis River and up again through the rolling, boggy hills. The river forks were swollen from the rain, and I had to wade through thigh-high water several times. I still made good time, coasting along in my wet shoes, and by two in the afternoon I was coming down towards Monson. 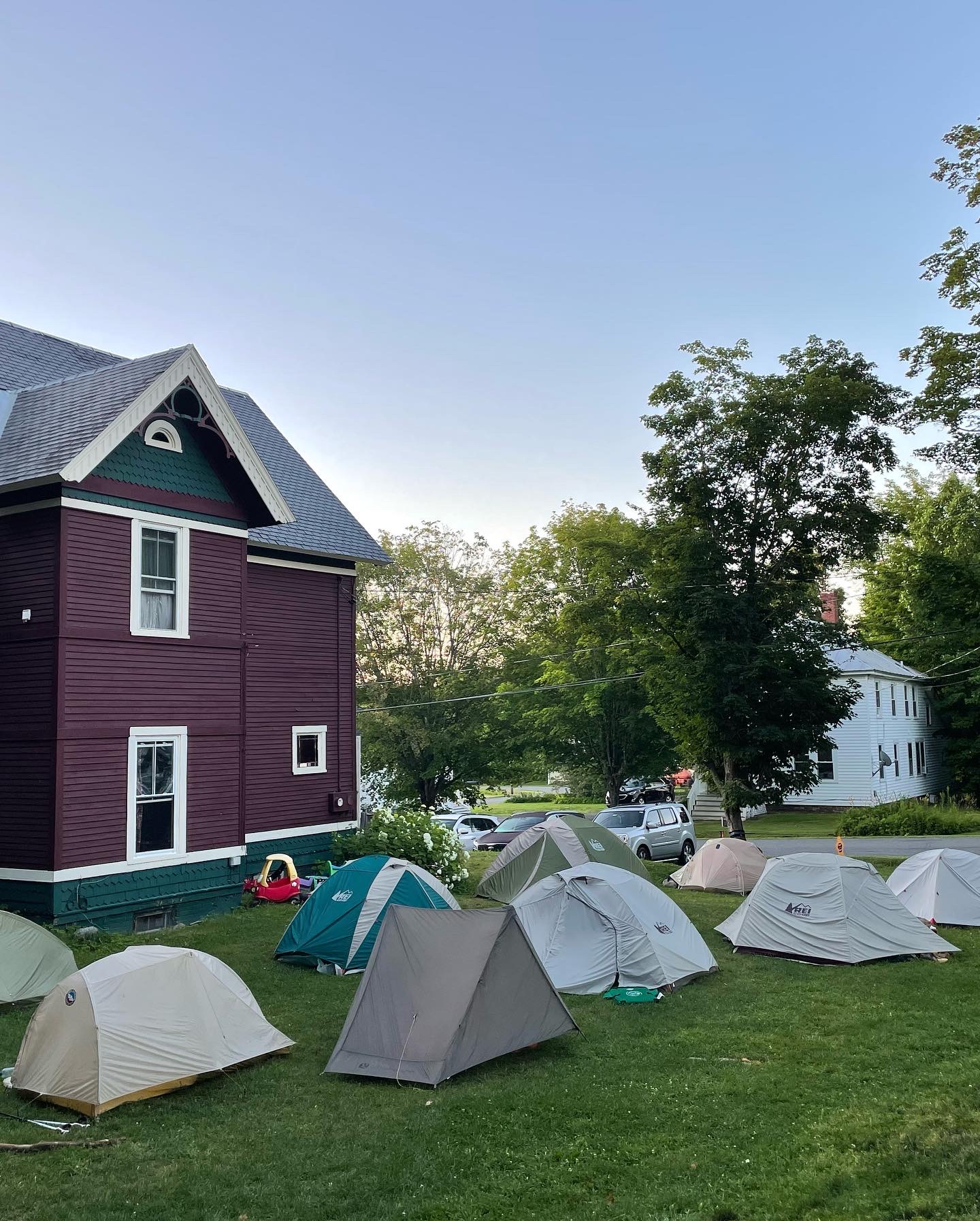 Monson, the final town along the trail. The last place to rest before the end. This little village in the wilderness, guarding the southern edge of the Hundred Miles.

The hostel here, Shaw’s, is a magical little oasis. It’s the first waystation for southbounders, giddy with accomplishment after their first hard week, and the last for us northbounders almost in sight of our journey’s end. There’s a lot of energy here, the energy of beginnings and of endings.

I’m in the heart of Maine, this endless, wild place, and it’s the beginning of the end. 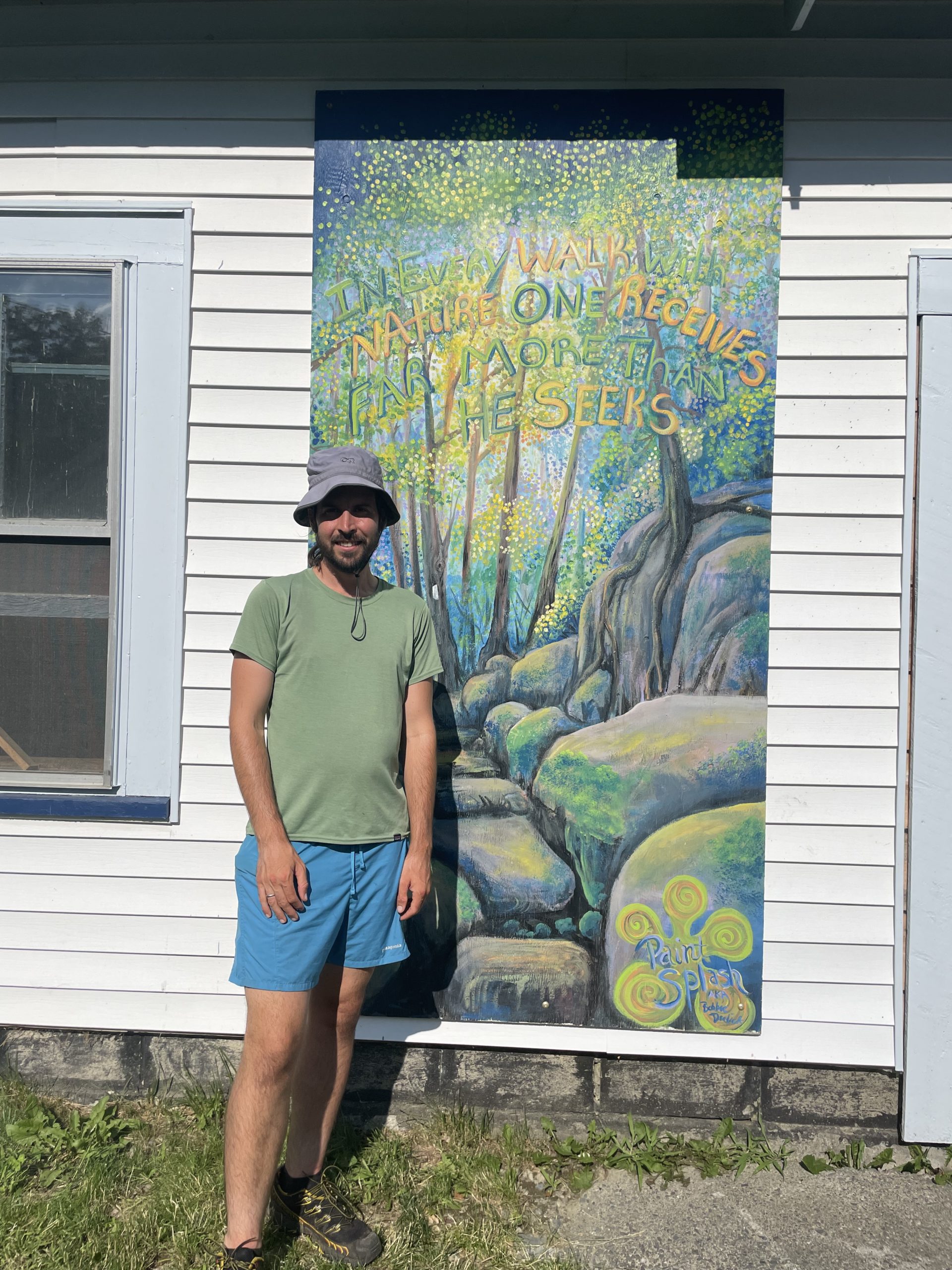