Boom. Out of the corner of my eye a globe red-orange light erupted twenty yards southwest of me and sounded like a 10-guage shotgun going off next to my head. Everyone in the Glasgow shelter cussed about it. Everyone said the storm was coming and I finally saw it coming into the valley with the rain and thunder. The lightning interrupted all conversations. A smell of burning wood was in the air, but nothing seemed alight. The sonic boom of the lightning cancelled out the rain for a minute until it swiftly returned. To me, that was the most amazing part. I’ve always thought it would be neat if I got struck by lightning. It’s the fanciful wish that sometimes strikes people like wanting to go to jail, be an orphan, or get stranded on a desert island. Seeing the bolt up and close like that made me rescind my wish awfully fast. I settled for taking a selfie of my hand next to an electric fence. 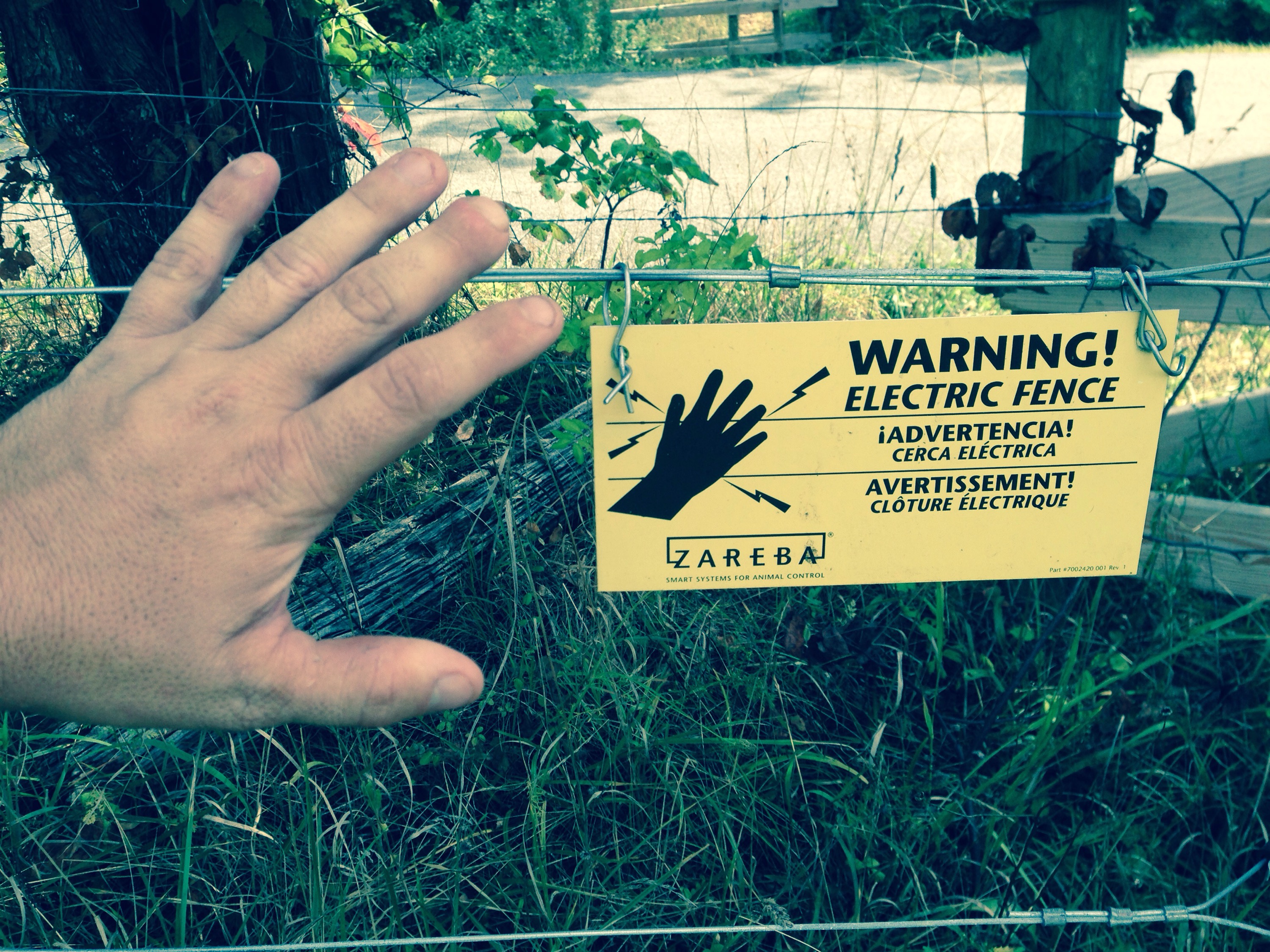 So, I’m making a bit of a reputation for myself on the trail. After a 20+ mile day in the Shenandoah’s, I arrived at the Blackrock Hut to see my friend Blood Blister there. As we set about eating our dinners, I see a long brown rat approach the shelter, observe us and then scurry underneath. It was about half an hour before we’d go to sleep. Even though I’m a deep sleeper, it’s hard to get to sleep when you hear something skeetering about. As I turn off my light and the others sound to be asleep, I hear the pitter patter of rat feet. Spasmodically, I flip around with my light upon the rat calmly eying me in the dark. Not tonight.

I call down to the Hiking Dude to fetch me my hiking pole. With some unsuccessful jabs, the rat sprints around the loft, but staying on the loft oddly enough. Hunching underneath the roof, I waddle to the kitty corner section and find the rat. He observes me again and I him. Hovering my pole four feet above his head, I slam down hard. The rat crumples into a fetal heap with permanent brain damage. Before anymore suffering, I push a large stone to the head putting it to sleep. Hiking Dude says, “now I’ve got something to blog about.” Like the Civil War trumpeter, he went out in front of me and proclaimed me Bard the Ratkiller. Anyone on the trail he told of this event, even half a dozen college campus groups from William & Mary and Washington & Lee. I was a minor celebrity.

An uneventful night I got a shelter mouse. A few days ago, Good People and the Citrus Bandit woke me up late because of a mouse they were trying to dispatch. I rolled over, hardly knowing what was what, smashed the mouse with a fist and threw it out, “get out of here boy.” The nighttime event took two minutes and I was back to sleep.

Yet, all of this minor celebrity stuff is overbearing because I felt like I didn’t really do anything. Something of more note was when I pulled a 125 pound white-tail doe off the pavement so a nighttime motorist wouldn’t get into an accident.

The basic group I hang out with are Good People (GP), Blood Blister (BB), and The Citrus Bandit (TCB). These Mass guys showed up recently and the Ninja Turtles seem to be shuffling in and out, but we usually go on steady. Our unofficial/official group name is G.C.F.G. (Good Clean Fun Gang). TCB is Brazilian-American and very agreeable. His smile is contagious and photogenic. Black hair is typically pulled back like Andre Agassi and contrasts with his youthful face. GP is a good ol’ boy from Alabama set with many laugh lines that are easy to be creased. He’ll typically throw in one of three pre-arranged face types according to where he thinks the conversation is going to go and he asks a lot of unnecessary questions. He says they’re for sociable reasons. BB is a “you know” kind of person reminding me of the many leaves that are falling down. She’s nice, but unpredictable even when she tells you exactly what she’s going to do.

So, most often I find myself walking with them or sleeping in the same shelter or hostel. TCB and I hiked together along Tinker Cliffs on a cool and rainy day. These iceberg-like rocks seem to drift away from the main mountain with steep cracks in between. If one fell, they would find themselves playing plinko with their body. The valley and mountains across the divide were socked in and the rain fell steady. When dark clouds crowd in and wide oak leaves cover the forest the day becomes dark and fairytale-like. It’s what I think England is like all the time. The trail visits these cliffs for half a mile with many ledges. We’re supposed to see McAfee’s Knob, but that’s for the next day.

McAfee’s Knob is much like Tinker Cliffs, but with the iconic ledge that juts out like so many of those that Wile E. Coyote falls off. It’s a big photo shoot with the G.C.F.G. minus BB who got lost coming up the mountain. She ended up on a road somewhere. When we came off the mountain we found her coming North having lost her direction again. TCB would lose himself in much the same way with only GP and I keeping our wits. Anyway, we watched the valley with small wisps of clouds gliding past and reflecting their shadows upon the green forest. We all sit on the edge of the Knob. 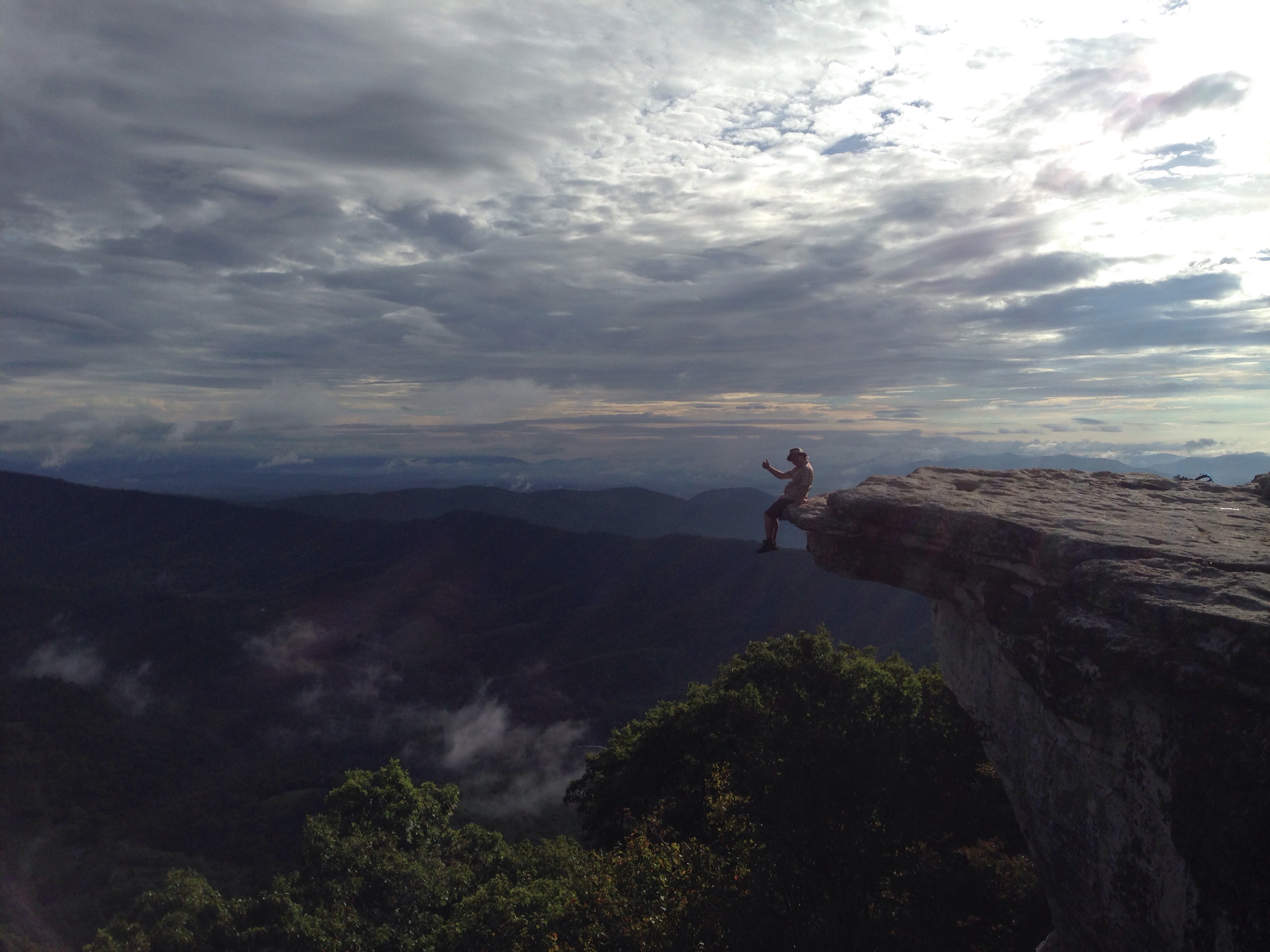 One of the Mass guys, Hulk, did a handstand on there while I contemplated hanging off of it, but of course practiced common sense.

The clouds and weather activity have been raucous lately. We are marching on the precipice of fall like birthing pangs. I want it to be in the eighties for awhile, alas it cannot be. The transition occurred when we visited 4 Pines Hostel for the next three days. The wind and rain pushed in with greater fervor and when we left that warm garage the temperature dropped to the fifties with wind in the teens. Yet, we did get to see the Patriots play the Steelers at Joe’s house. We tasted peach bourbon moonshine. It went down so silky it would be too easy to get black out drunk, but like fine spirits it should be treated with respect. Many guinea fowl, ducks, chickens, roosters with the addition of some dogs, cats, and a turkey strutted around the hobby farm/hostel. Coyotes sang outside the fences and Joe fondly spoke of shooting them whenever they got close.

It was with heavy heart that we went back to a woods much colder then the last we walked through. With many layers we walked without sweating, but chills went down us to the core. Ironically, Wind Rock gave us our only vista of the day. Gusts of wind balked at the oaks like an unruly sea. The valley is undisturbed besides one lonely house. That’s as close to a wilderness as I’ve seen in a long while. Hound dogs were practicing for the bear hunt at a safe distance always baying. My daydreams were filled with confronting them. I’d win of course. Finally, GP, TCB, and I ended at the Captain’s house. We crossed the river on a zip line that our weight carried us across. With some Dr. Thunder, wifi from the Captain, we set up our tents on the dew-ridden grass with his dogs watching and protecting over us.