My friend Marcy texted me this morning. After some chit chat and apologizing on my part for totally forgetting to text her on her birthday, she asks me if I’m doing well.
“Yeah, I’m doing great,” I say, as I’m taping a blister on my foot in a dirty laundry room behind a general store. I’m wearing a semi clean smelling pair of running shorts and a rain jacket, charging my phone and waiting for my shirts and underwear to dry. “How was your birthday party?”

Yesterday we arrived at the Nantahala Outdoor Center, which is a great place to recharge your actual and metaphorical batteries. Cheap bunks, showers, laundry, a restaurant with great burgers (topped with chili!) and plentiful beer, it’s easy to see why this place has the reputation it does. If I wasn’t a couple days away from Fontana Village and a mail drop from Mom I’d totally take a zero here. As it was we met up with Jimmy, an old hiking buddy, and enjoyed an epic game of giant Jenga over a few beers before retiring for a night of awkward sleep. 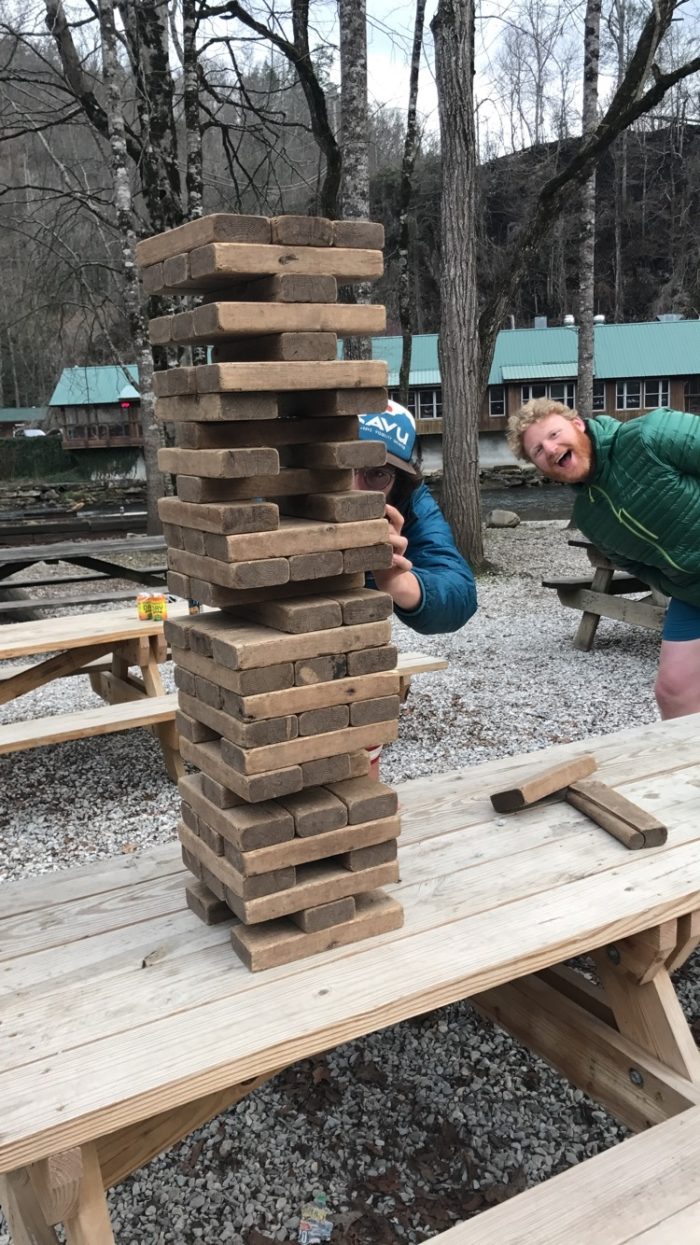 Sleep on the Trail

Speaking of, my sleep cycles changed pretty significantly and almost immediately after getting out here. I’ve talked to a few other hikers who have experienced this; apparently this is a thing that’s been written about since Ancient Rome. Around hiker midnight (9oclock) I go to bed and have mybfirst sleep, which ends around 2 or so. I’ll wake up and lay there for a bit, maybe play on the phone if there’s signal. Or wait it out if it’s a bad night. An hour or two later I’ll slip into second sleep and wake up around 7 to the sounds of other campers unzipping their tents. Or, if you’re lucky, the sound of guys tossing and turning in the beds of NOC’s bunkhouse.

Following that was a pretty rough day that was all up. Twelve miles or so later I was in a little gap with ten or so other people, relaxing and cooking around the fire. A few tended to their tents; everyone was a bit anxious about the rains forecasted for the next week or so. For my part, I clung to the fire, where a fine fellow named Dog Shoes had opened a story with “when I was in Africa, training to track lions…”

As it turned out, we got a heavy rainfall that night, so much so that it loosened the soil where my tarp was staked, and I woke up to a wet everything. Pack, food bag, clothes, quilts, hammock, the works. In a foul mood I stuffed everything into my pack and set off into a trot, but the AT always has a surprise in store for you.

As I crested the next mountain the beautiful morning landscape stopped me in an instant. The valleys were filled with a smoldering mist. Rays of sunlight punched through heavy, waterlogged clouds, illuminating the fog in the valley beyond, rising through the gaps in the distance, bright like ghostly fire.

No picture would do it justice. You just have to be here.

Gorgeous or not, I still had a pack full of wet gear. Being only 15 or so miles away from Fontana Village, I decided to camp near the shuttle stop and take a nearo there the next day. And that’s how Backtrack and I found ourselves sitting in the parking lot of Fontana Marina, cooking dinner under the extended roof of the public restroom like proper hiker trash. After a couple of hours of trying to dry our gear, the rain started back up. Our plan had been to stealth camp by the parking lot, but neither of us were too thrilled.

“Man…do you just want to call it and take an extra night at the hotel? I really don’t want to spend a night in a damn parking lot.”
I broke like a twig, but I couldn’t resist pushing Backtrack’s buttons first.
“Really? I’ve never met a girl from Jersey too good for a parking lot.”
After a quite a bit of laughter, a punch or two, a few go to hells, and a phone call, we were in the back of a pickup on our way to Fontana Village (which is noticeably more expensive this year than what was listed in last year’s AWOL guide). 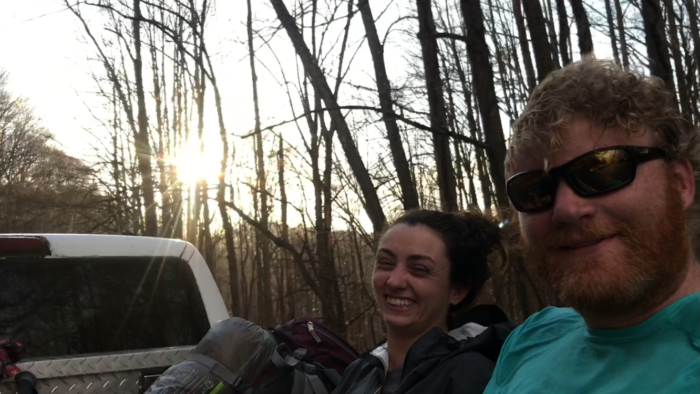 Taking a zero here turned out to be a great idea. For one, being able to rest after a slew of fifteen mile days feels awesome. Secondly, a proper thru hiker must gird him or herself for the Smokies with copious amounts of beer (Currahee!!). Lastly, for me, my feet, which have held up fine so far, are suddenly onset by blisters.

I had a few hotspots a few days ago, which I quickly covered with some leukotape (though duct tape seems to be the preferred remedy on trail) and considered myself good. This morning I peeled the tape off to clean my feet and discovered underneath was a blister party to which I hadn’t been invited. So now I get to clean and bandage and clean again while I wait for a package from home to arrive tomorrow, then tape it all and hope for the best. 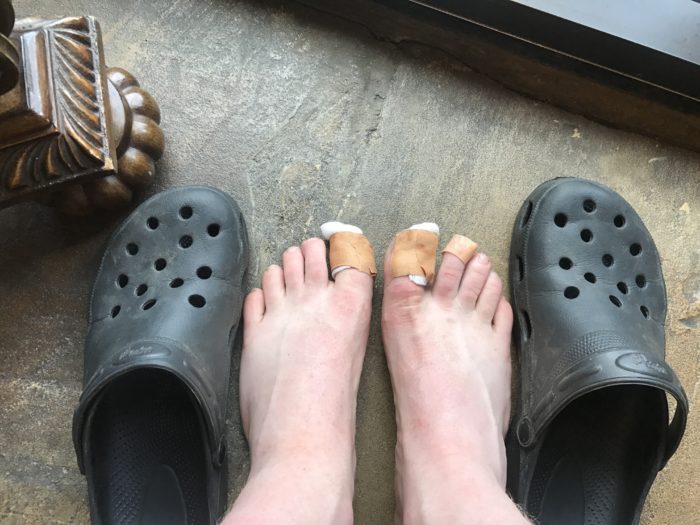 One way or another, tomorrow I’m climbing into the Smokies.