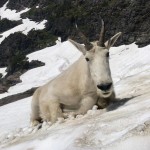 It takes only half a day of hiking to smell bad. This is known. By the time I finished the approach trail to Springer Mountain I was locker-room ripe.

Hiking on top of seven inches of snow packed down by the previous day’s SOBO hikers was sweaty work. Happy with a solid morning’s progress, I aired out my clothes before moving on. By the time I reached Stover Creek Shelter the smell was worse.

Apparently, This Is Normal…

Foul little puffs of air escaped up the neck of my down jacket as I moved about, assaulting my nose. My mind attempted to recall recent meals that might account for the purging stench wafting from my pores. I used to run marathons and I don’t recall ever having smelled this bad. By the time I finished dinner I was longing for deodorant.

When I hunkered down for the night I smelled like I brought a hot sack of kitchen garbage to bed with me. I struggled with the dilemma of face out of bag for fresh air versus face in bag for warmth. Each time I ducked my nose back into the bag to warm up I gagged. Do I smell ketones?

Changing clothes in the morning helped only a little, mostly resulting in more smelly clothes. My next opportunity for laundry was Neel Gap, at least two days away, and I was already two pairs of socks and second shirt into the journey.

The Army ranger school operates out of Camp Merrill, near Dahlonega, just south of the trail. Sounds of helicopters a few miles south of Stover Creek shelter echoed in the night. At Cooper Gap the next day, I passed by a small group of Army cadre waiting for the ranger students. I got the hairy eyeball as I passed and couldn’t help thinking that I was happy because I wanted to be there. They were not happy because they had to be there.

A combination of sun and hikers pressed the snow on the trail to Blood Mountain into a uniform sheet of ice. I arrived at Gooch Mountain shelter smelling worse than I had at Stover Creek. Four SOBO hikers arrived shortly before sundown and made a fire.

The water in my bottles froze during the night. My legs ached and I was nearly out of food. Neel Gap was nearly 16 miles away on the other side of Blood Mountain, the sixth highest peak in Georgia at 4,458 feet elevation.

I wore my Yaktrax all day, as eighty percent of the trail from Gooch Mountain to Neel Gap was covered with ice. The verdict? Best $20 I ever spent.

The red-hued landscape around the Blood Mountain Wilderness Area caused me to think that was the reason behind the name. The red clay soil and fallen red leaves gave the trees a red tint. The color reminded me of pictures from a Martian rover. I learned later the name came from a battle fought between the Creek and Cherokee tribes on nearby Slaughter Mountain.

I summited Blood Mountain at 3:00 p.m., fearing I had no time to reach the Mountain Crossings outfitter at Neel Gap before they closed for the night. My legs started cramping on the steep descent.

What I learned on my first section of the Appalachian Trail is that it takes a surprisingly short amount of time to smell really bad. It also takes about as much time to not be self-conscious about it. Things that slow down a hike include snow, ice, bad weather, and caution. Prudent caution is not a bad thing. Things that speed up a hike include good diet, good rest, good shoes, fair weather, and a positive mental attitude.

I made it to Neel Gap on time. Up to this point I had aspirations of tracking everything I ate or spent money on. I won’t say much, then, about all the Doritos, cheesy crackers, Peanut M&Ms, pop tarts, beef jerky, and pizza that went down the hatch upon my arrival. That data set clearly went out the window.

I took a zero the next day to relieve my leg cramps and wash the stench off my body and out of my clothes. Rested, I stepped off for Low Gap shelter. By the time I reached Hogpen Gap I was starting to smell bad again.

See you on the high ground.

Recovering infantryman. Appalachian Trail. Life is patches, not upgrades. Metalhead. Lazy mathematician. Political atheist. Nearly normal. Living at the intersection of necessity and free will. Getting run over...