It Started Well, but I Am off the Appalachian Trail for 2022

It started well, but I am off the Appalachian Trail for 2022.

I did not underestimate the difficulty of the trail, at least not too badly. What I found was pretty much as advertised. What I did underestimate was how much three rounds of surgery had clobbered my strength and stamina. After a month of conditioning, I was much more ready for the trail than I was at the beginning of February, but not ready enough. 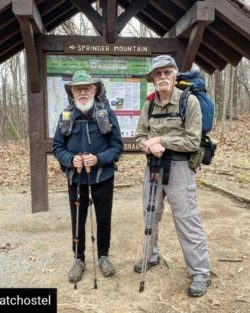 Pearwood and Bilbo by Lucky.

Brother Chuck (aka Bilbo) and I drove from Fayetteville to Above the Clouds Hostel on Monday. From there Lucky shuttled us to the Springer Mountain parking lot. We hit the trail about 2:00. Given the mid-afternoon start, we were only planning to go to the Stover Creek Shelter, less than two miles north.

We arrived at the shelter about 3:15, before the heavy rain moved in. There was still plenty of room. We set up in the loft and watched the deluge move through. After the rain, the stoves came out and dinner was served. The dedicated fire sitters got the fire going again. (Pictures below.) We slept warm and dry in the shelter, though I did put my puffy on sometime during the night.

I enjoyed the Stover Creek Shelter. The roof over the picnic tables was wonderful.

Tuesday morning we packed up and headed for Hawk Mountain Shelter, a bit less than six miles away. The rain caught us mid-afternoon. By the time we got to Hawk Mountain at 4:00, it was raining steadily. It was cold, the shelter was packed, and there was a veritable tent city already set up.

While Chuck got his tent set up, I tried to get my tarp into a workable configuration for sleeping. It did not go well. We ended up with both of us sleeping in Chuck’s little tent with the tarp in a simple vee off one of the side doors for our gear. With that done, we went back to the shelter and fixed dinner. I had couscous with a tuna fish packet mixed in. Not bad at all.

It rained on and off through the night. The tent had a couple of pinholes above my head. I pulled my stocking cap down and ignored the occasional drips. I was warm and comfortable enough in my bag on top of my air mattress, but everything else was getting wet, even the stuff we had carefully set between us. I knew it was time to bail. With all our gear wet, I was not interested in another night out crammed into that one little tent, especially with the 20-degree forecast for Saturday night in Dahlonega down in the foothills. I knew my gear couldn’t handle the weather. I did not want to end up with another emergency situation such as I had had in February.

I did not want to get out of the sack Wednesday morning. I was warm, but it was cold outside. There was water on the tent floor all around us. Thankfully my clothes had mostly stayed on top of other stuff and were only damp instead of soaked like my mittens. Getting dressed was not nearly as traumatic as I had feared. Thank God for merino wool! We got our sleeping bags stuffed and compressed and out to the relative dryness under the tarp. We made our way to the shelter where the breakfasting and packing up and heading out was in full swing. We waited for the commotion to settle before cooking our own breakfasts; we, at least, did not have far to go that day.

We found out there had been an emergency extraction the evening before. It was a fellow we had first met when we passed him on our way to Stover Creek. He was not moving fast but he was determined. He would go for a while, sit down for a break, then get up and do it again. I think it was already raining by the time he made it to the shelter. He left the shelter before we did on Tuesday. We passed him on the way. It was late by the time he got to Hawk Mountain. He was wet and cold. I grabbed his water bottles and headed down to the creek to fill them. When I got back to the shelter, I announced to those there, “If there is any way you can scrunch together and fit this gentleman in it would be most appreciated. He has had a very long day.”  The last I saw he was sitting on a side bench with a water bottle held close. I hope someone had filled it with warm water. Apparently, after Chuck and I headed for our sleeping bags, folks called emergency services for a hiker in distress with hypothermia. For which I give thanks. The trail can definitely kill you. 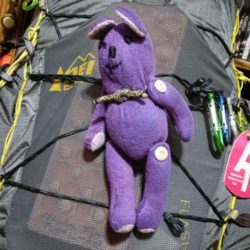 This critter showed up in one of the packages of camping gear milady mailed to me after my first attempt. It obviously wanted to go with me on the Appalachian Trail. Folks kept referring to it as “the mouse,” so I decided that is what it was. I named him Max after the son of a long-time artist friend in the Ukraine. I added the bow tie and sprayed him with Scotchgard. I got him as far as Hawk Mountain.

Sometime after we arrived at the shelter a family of four trekked in, Mom, Dad, and two preteen daughters, destination Katahdin. I asked Mom whether she had followed FightForTogether on their thru-hike a couple years ago. “Oh, yes!” They found a reasonable spot and set up their tents.

Wednesday morning, when it was clear I was not going to make it to Katahdin, I decided that Max had to continue on his way. I solemnly bequeathed Max to the younger daughter and handed Mom my business card so she could stay in touch.

Chuck and the older daughter had all sorts of fun comparing sketchbooks. What a delightful crew. I think this foursome is going to make it.

Verizon may have the best overall connectivity along the AT, but here in Georgia, Chuck’s T-Mobile phone has had much stronger connections. So he got to make the arrangements for a shuttle pick-up at Hightower Gap. Bret Eady said he could meet us a 5:00. We hung around the shelter and chatted with the folks stopping there for a lunch break as well an ATC Ridge Runner making her rounds. About 3:30, I had a tuna fish packet and Chuck had his snack. We finished packing up and ambled (carefully!) down the seven-tenths of a mile to Hightower. It was a fairly steep slope with lots of rocks and roots. At least the weather cooperated. We even got a glimpse or two of the sun. It was cold (low forties) and windy at the gap. I pulled out my raincoat for a windbreak layer. Bret picked us up promptly at 5:00 and took us back to Above the Clouds and Chuck’s car.

I left a 24-pack of Yuengling Traditional Lager at Above the Clouds. I had planned to present it myself to the Thursday night crew as a bit of paying it forward for all the help I had received from the trail-angel crew in February. Lucky said he would be happy to do the honors.

We got back to Chuck’s house in the early evening. Thursday was sunny and low sixties in Fayetteville. I did my laundry and got my gear hosed off and hung up to dry. Today I wrote a brief post on Instagram and this expanded version here. I will leave the retrospective for another post. I am wrung out enough as is.

Where to from here?

I am not planning to make another thru-hike attempt in 2023. Neither am I planning not to hike. If I want to thru-hike the Appalachian Trail and have a reasonable expectation of making it all the way to Katahdin, I need to get myself on a serious training regimen to build back my strength and stamina. When I can do ten miles up and down hills with 40 to 45 pounds on my back, I will be able to consider another thru-hike start.

Thanks again to my February trail angels and to Lucky at Above the Clouds Hostel for all their support. 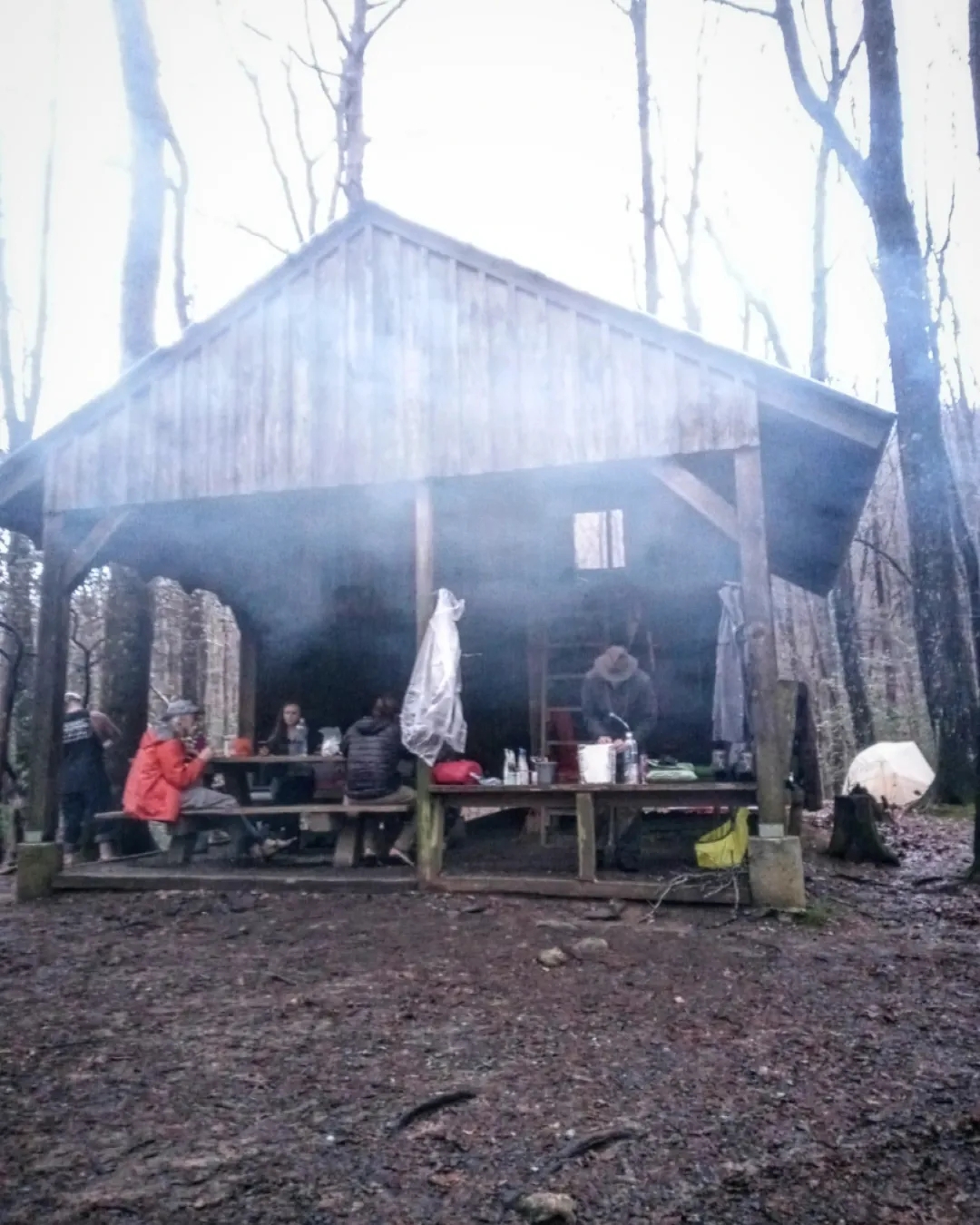 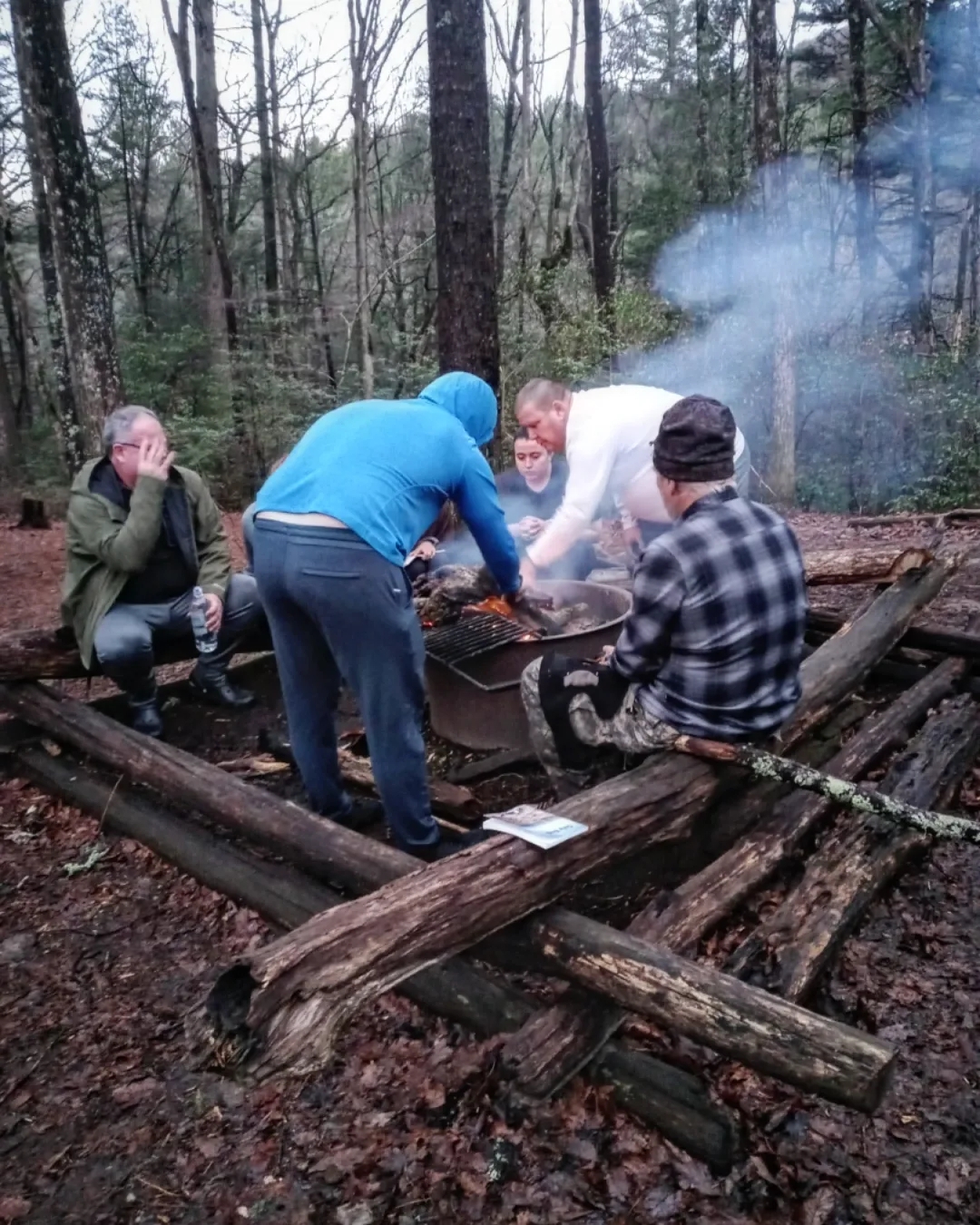