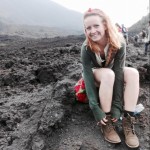 It Takes a Village, Right?

What is the difference between Blue Blazing and White Blazing?

Can I bring my Jetboil on an airplane to Georgia?

Will my pack be small enough to be considered a “carry-on?”

How do I deal with having my Moon Cycle on the AT?

When would someone leave to hike the AT? SOBO / NOBO?

Should I use boots or trail runners on the AT?

I researched it. What. How. When. Why. What the hell is flip flop and hiker trash.

I’d like to think that I’m a good hiker. But those are all questions that I googled in 2015/ 2016 while preparing for my hike. I felt clueless. Like I had been a fake-hiker all these years because trail magic made no sense to me.

So I googled so, so many things.

Yes, you can bring your Jetboil, but not your fuel. No, your pack would probably be way too big for a carry on. SOBO / NOBO translates to South or North bound, DUH. White Blaze is strictly the A.T, while Blue Blaze are side trails. Don’t let anyone tell you that using Google is useless- Google on, fellow hikers. Oh and no, there is no way to convince TSA in letting you bring your utility knife on an airplane. Get your shit together, Liz.

I hike because I have a strong pull and draw to nature. And I usually know what I’m doing, with being outdoors that is: I follow trail signs, I’m in good shape, and I’ve been hiking mountains since the womb. Do people still say that? (Oh, PSA: you’ll realize I’m really bad at sayings. I didn’t get my grandmothers ability to make life into a string of sonnets, sayings and catch phrases. I once said: Let sitting ducks lie and I was out like a log….)

Even though I’ve been hiking for just about two decades, I don’t really know anyone personally who has done the A.T/ P.C.T, so all this lingo was like a foreign language to me. And also, I haven’t been camping for more then a week, yet I’m going to disappear in the woods for four- five months. Woohoo!

No, but seriously. When I was doing my research it seemed like hiking the AT was this whole not secret, but secret club. And I wanted to be in it- I wanted to understand the culture of it. And what better way then to live it.

But by preparing for my thru-hike for a couple years now, I have been able to decipher what some of it means, and know the rest will just figure itself out. I’ve read countless articles and blogs via Appalachian Trials, WhiteBlaze, and even listened to helpful podcasts (Sounds of the Trail is a personal favorite). I’ve bought books and maps and self help books. I’ve shoved myself so far into this vortex that this foreign language is now becoming a third language (I know some Spanish, too). Some things are obvious, but others, I’m still researching.

Like for my ladies out there: To Diva or not to Diva, that is the question?

Okay, want to know what I feel like? You know the movie Knocked Up with Seth Rogan? When the Katherine Heigl says to him, “What do you mean you didn’t read the baby books?!” And then they break up and he winds up reading all the baby books? And he kind of knows what he’s talking about towards the end but he’s still scared shitless? Well, that’s me. Seth Rogan: Liz as Baby: Appalachian Trail.

Anywho, I decided I was going to do the Trail at somepoint in life, but back in July 2015, I decided that I would be on Springer Mountain, Georgia in March of 2017, walking approx 2,181 miles back home.

Crazy. I know! I’m strapping a 40 lb. bag on my back with all the things I will need for months. Willingly. And I’m excited about it!

What. Yeah, for four/ five months- just me, my backpack, tent and supplies. The AT is a trail that runs from Georgia to Maine and runs through 14 states: Georgia, North Carolina, Tennessee, Virginia, West Virginia, Maryland, Pennsylvania, New Jersey, New York, Connecticut, Massachusetts, Vermont, New Hampshire, and Maine (and yes, I googled exactly what states too). I plan on making this a journey, so if any are located near the trail, give me a shout, I’d love to visit! And use your shower… Maybe?

How. Well, I’m getting down to Springer Mountain (courtesy of my boyfriend who is amazing and wants to drive all the way down there to send me off), and then I will simply just put one foot in front of the other. For 2,181 miles.

When. I plan on being down there by March 6th. Might start in February if Mother Nature gives us a mild winter. The plan is being able to finish July/ August, so I will be able to scurry off to Monhegan Island to see two lovely souls wed.

Why. Because I can! I love the outdoors, and I’m at a point in my life where the question shouldn’t be why, but why not. I am nostalgic for places I have seen in magazines and blogs. I am longing to see the East coast, and truly see it. Driving down 95 on a highway doesn’t allow you to see the contour of our country the way I want to see it. Raw. Dirt-filled. Simple. “Cool. Green. Beautiful.” Life’s too short. As much as this is to be in the woods, this is also to know that I can finish something that I start despite hardships and failure. Katahdin is more then just a gorgeous mountain in the middle of Maine- it signifies an end and a beginning to a trail that some people spend their whole lives wanting to hike. So I’m just gunna do it now rather then later. The why shouldn’t be that important to you anyways, and I’m sure I’ll divulge a little more as time goes on.

But I need your help!

No, I don’t need or want your money, I’m not starting a GoFund Me, or anything like that. I just need your positivity and words of encouragement. What I plan on doing will take everything in my being. And it takes a Village, right?

I will sweat, I will cry, I will most definitely bleed (they don’t call me Calamity Jane for nothing), and it will test me on all aspects of my being: physically, emotionally, and mentally. There will be some days I won’t want to get out of my tent, and even a few days where I won’t hike at all.

And there will be other days, hopefully most days, where I get up and thank Mother Earth that I get to explore our beautiful country, where the sun will shine on my face and I will smile just for simply existing (I do that now, so hopefully I’m still a ray of sunshine in the midst of my Virginia Blues). **Also, Juice- if you’re reading this, I just realized now I can sometimes be Hallmarky.. Oh well, you’re kinda right. **

While I will include where I am on the map to keep you guys updated, it will somewhat be a stream of consciousness blog, but with helpful hints and hacks about hiking the AT.

Bear with me during my journey! And stay tuned for the next post, where I’ll go into detail about what/ how/ where/ why I chose the gear I chose!

Cheers and keep chasing the sun!

Hey guys- my names Liz. I once gave a snack bag to an Irish man, who was hiking the Appalachian Trail. It changed my life. I'm settled cozy in Southern Maine, and engaged to my best friend! Yoga, reiki, rivers and mountains soothe my soul, but cider and icecream also help with that. I have dreams of hiking the trail and living in the woods.