It Was Only A Matter Of Time: Why I Am Attempting An AT Thru-Hike

Although I’m years away from the idealistic teen years, some of the credit for my interest in backpacking can surely be traced to one of my high school volleyball coaches. For reasons I now cannot recall, “Skell” gave me a copy of Anne LaBastille’s memoir, Woodswoman. I devoured that book and imagined myself living in a log cabin, seeking solitude and hiking to places few people take the time to find.

As I was only 15 years old, I wasn’t about to build a log cabin or be allowed to hike solo anytime soon. Instead, my parents signed me up for a youth backpacking trip to the Beartooth Mountains in southwestern Montana.

I now cringe to think of being accessory to that herd of flannel-clad newbie hikers flattening alpine meadows during the years of unregulated backcountry. If I would meet a group hiking en masse like that today along the trail, it would surely make me want to hide my head inside my quick-dry shirt and scream.

In spite of that first trip, or maybe because of it, a heady sense of wilderness aesthetics and ethics was instilled.

I met my future husband in my sophomore biology class. While I grew up with summer camping trips, and now found myself smitten with the idea of backpacking, Sam had never camped. What would turn out to be a theme throughout our life together, I convinced him to join me on my second backpacking trip, a sixty-mile section of the North Country Trail in northern Wisconsin (also parent-approved—as well as—church sponsored).

I had been outfitted with an external frame backpack and lightweight sleeping bag for that first trip out west. Now Sam needed gear. Instead of ardent parents wanting to ensure he was properly prepared, Sam needed to be more resourceful. He picked up a used canvas (likely circa 1960s) Boy Scout backpack from Goodwill. Among other things, it lacked a hip belt.

He survived the trip and me. But the tortuous backpack was replaced.

The following two years we hiked Pictured Rocks National Lakeshore and a forty-five-mile section of the Ice Age Trail—each led by the same minister and church group. 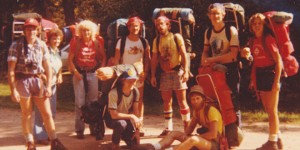 Hiker fashion circa 1970s: T-shirts, blue jeans, short shorts and flannel.
And backpacks large enough to hold a family of four.
My future husband is one of the fine specimens pictured above. 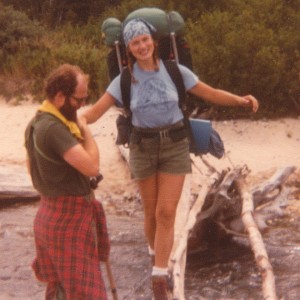 With the help of a chaperone, gracefully navigating both a photo op
and a tricky crossing in Pictured Rocks National Lakeshore.

We also retraced the footsteps of Anne LaBastille, detailed within my cherished tome, hiking forty miles of the Northville-Lake Placid Trail the summer before I left for college. More than twenty-five years later, the same trail would re-enter my life once again.

I thought my love of the outdoors would translate to a natural resource degree, so off I went to the University of Wisconsin-Stevens Point. I worked at the University Center’s Rec Services dispensing camping equipment and joined “Trippers,” the adventure trekking club.

In spring, Trippers was heading to Georgia, to hike a section of the Appalachian Trail. I knew a few people through the club, but none who were close friends and I signed up as a solo. I don’t remember where we started, but I definitely remember carrying a heavy pack and hanging out in the Blood Mountain stone shelter waiting out some snow flurries. And I also recall meeting a solo woman intending to thru-hike the trail. I can’t recollect her name nor do I know if she ultimately made it to Katahdin, but she certainly was successful imparting the concept of thru-hiking to one idealistic college freshman.

Then life happened. After graduating with a BFA degree in art (that’s another story), Sam and I were married by the same minister who led those summer church backpack trips during the high school years. One of our plans was to travel around the United States after Sam finished his degree. But before he graduated, our daughter was born. Instead of two of us on the road, there were now three.

We spent two months road tripping and camping prior to arriving Leavenworth, Washington in mid-May, where we had volunteer jobs lined up with the forest service. We lived in a one-bedroom, gas-lit, CCC-built cabin at the end of the sixteen-mile long Icicle Trail in the Okanogan-Wenatchee National Forest. Our responsibilities included taking daily weather readings, dispensing trail maps and informing visitors that we had no running water or vending machines. Sam and I took turns taking long day hikes up into the mountains via Chatter Creek and shorter walks together with our toddler, picking huckleberries along the Icicle River corridor. In August, a visiting friend, Pat, and I hiked a three-night/four day loop near Lake Chelan.

After Labor Day, we had to make a decision about where we would go from here—and it was back “home” to Wisconsin. 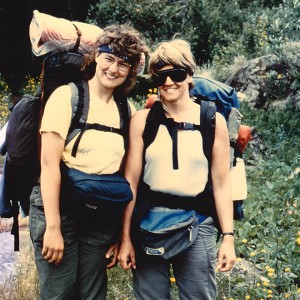 In addition to fanny packs worn backwards,
mullets were also considered quite sensible. Back in the day.

Visits to the snowbirds in an Arizona retirement community provided periodic opportunities to hike the nearby Santa Rita Mountains and our son’s study year in Australia gave me the chance to hike a fifteen-kilometer portion of the sixty kilometer Overland Track in Tasmania’s Cradle Lake National Park.

Hiking still was commanding consideration during our vacations and travels.

Over time, I lost touch with my friend, Pat, and Sam’s back began to balk at sleeping on the ground. We switched from hiking to canoeing after our son was born. And still holding on to my Anne LaBastille illusion, we did manage to build a log cabin, a cordwood sauna and a lean-to seventy miles north of our permanent residence.

The kids are now grown, I’m in good health, am self-employed and able to manage my time. A few years ago, dormant notions within my subconscious began to manifest.

In 2011, I through-paddled the 740-mile long Northern Forest Canoe Trail (NFCT). A section of this trail parallels the Northville-Lake Placid Trail in upstate New York along Long Lake. The NFCT also crosses paths with the AT in Rangeley and Stratton, Maine. A friend and I took a day off from paddling and hiked up to Cranberry Peak in the Bigelows. Afterwards, I felt a tug when I espied a hiker sitting outside Fotter’s Market in Stratton, downing a pint of Ben and Jerry’s ice-cream. Hmmm….

During the planning phase of my NFCT trip, I virtually met Team Moxie through Facebook. Justine, T.K. and their 4 lb. Yorkshire Terrier “Moxie,” were planning a through-paddle six weeks ahead of me. “Miss Daisy” and “ATK” also thru-hiked the AT in 2004. We’ve stayed in touch—even meeting each other a few times. After finishing the NFCT, Justine quipped, “Now you need to hike the AT.” Hmmm…..

2014. The daughter who we hauled all over the U.S. is now married, living in North Carolina and expecting a baby. I offer to help out for a month once the baby arrives, but I don’t want to be in their way and stay with them the whole time either. I find a room to rent on Craig’s list. It’s Kelly’s first foray into getting a roommate and my first time using Craigslist. Knowing very little about each other except for brief conversations by phone or email confirming neither of us are serial killers, I show up on her doorstep in January. My furnished room included several books including the Barefoot Sisters’ Southbound. Kelly has also hiked sections of the AT and has all of the southern state’s AMC trail books. Hmmm….

I return home and email Justine that I’m thinking about possibly, maybe, perhaps, conceivably, hiking the AT, perchance, in a few years. She immediately sends me a fat letter full of tips and suggestions and says, “My heart is bursting with excitement for you.” Her own blog asserts “Dream, Pursue…CONQUER!”

So here we are. Skell, Anne, Pat, Justine, Kelly, the young woman eating ice cream in Stratton and the nameless solo female through-hiker I encountered on that college spring break trip so long ago—each of you represent a reason why this idea was never abandoned. Plans are now in motion. I will attempt a through hike in spring 2016. It would appear to have been only a matter of time.