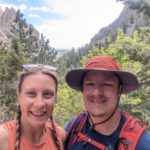 We had a restful first night in Georgia, however, it was back to the grind today.  Another massive weather system is on track to impact the area with torrential rain and strong winds.  Several tornadoes have touched down in other states as the cell moves east.  As we’ve done throughout this journey, we got up early and were hiking during the twilight hours.  We enjoyed a colorful sunrise from the trail. 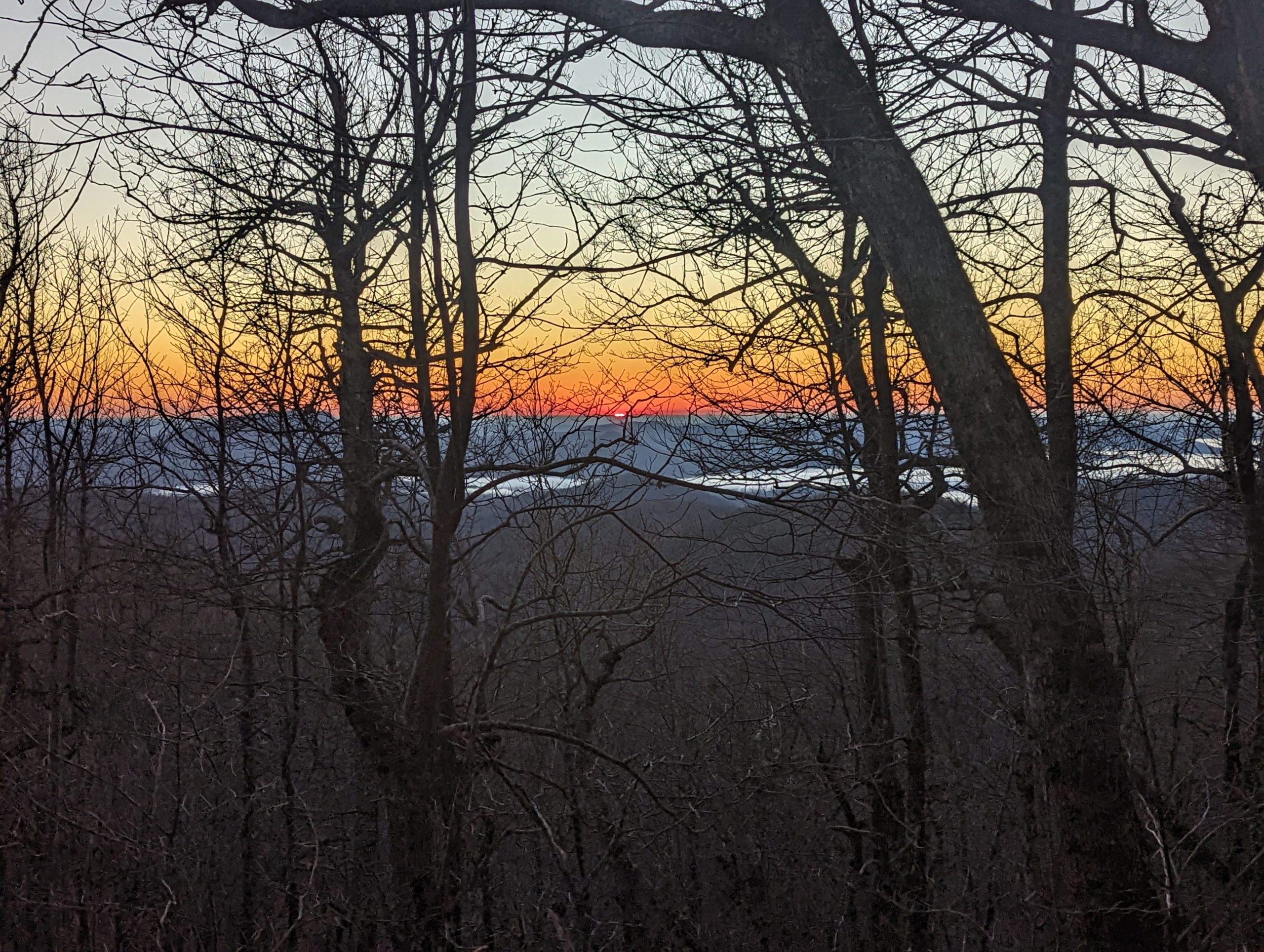 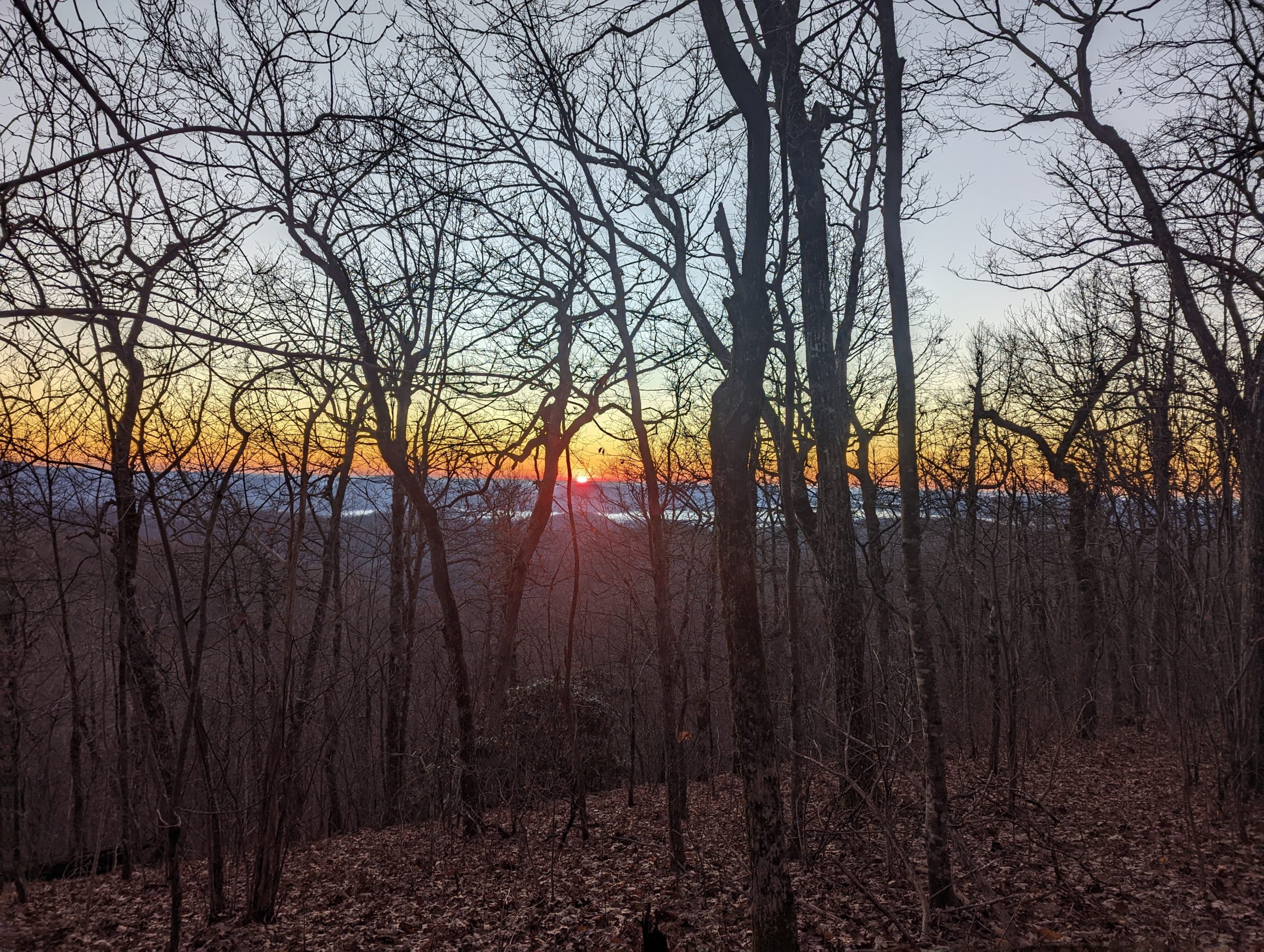 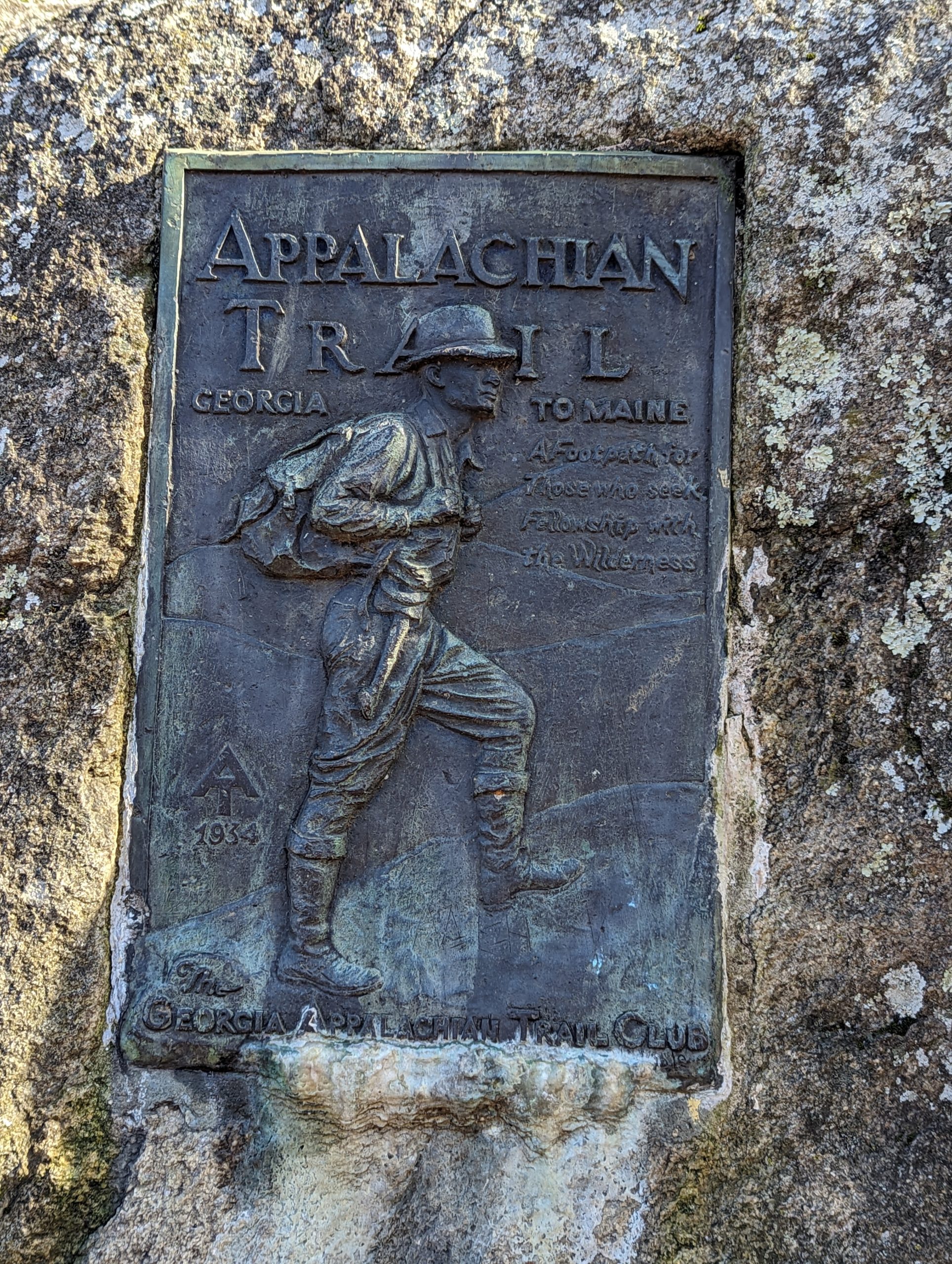 Today would be our last twenty mile day (and our last back to back twenty mile days) to ensure we get a spot in the next shelter. We haven’t seen many people on trail so we aren’t too worried about crowding. We enjoyed some views along the way.  As we crossed one of the dirt roads we ran into a section hiker, Feather and two others who were doing some trail maintenance. Feather was getting off trail early and gave us her remaining food. The two others gave us a Gatorade and a weather update. We chatted a bit and thanked everyone for the trail magic. Soon we noticed the skies starting to turn gray and could hear the winds picking up. 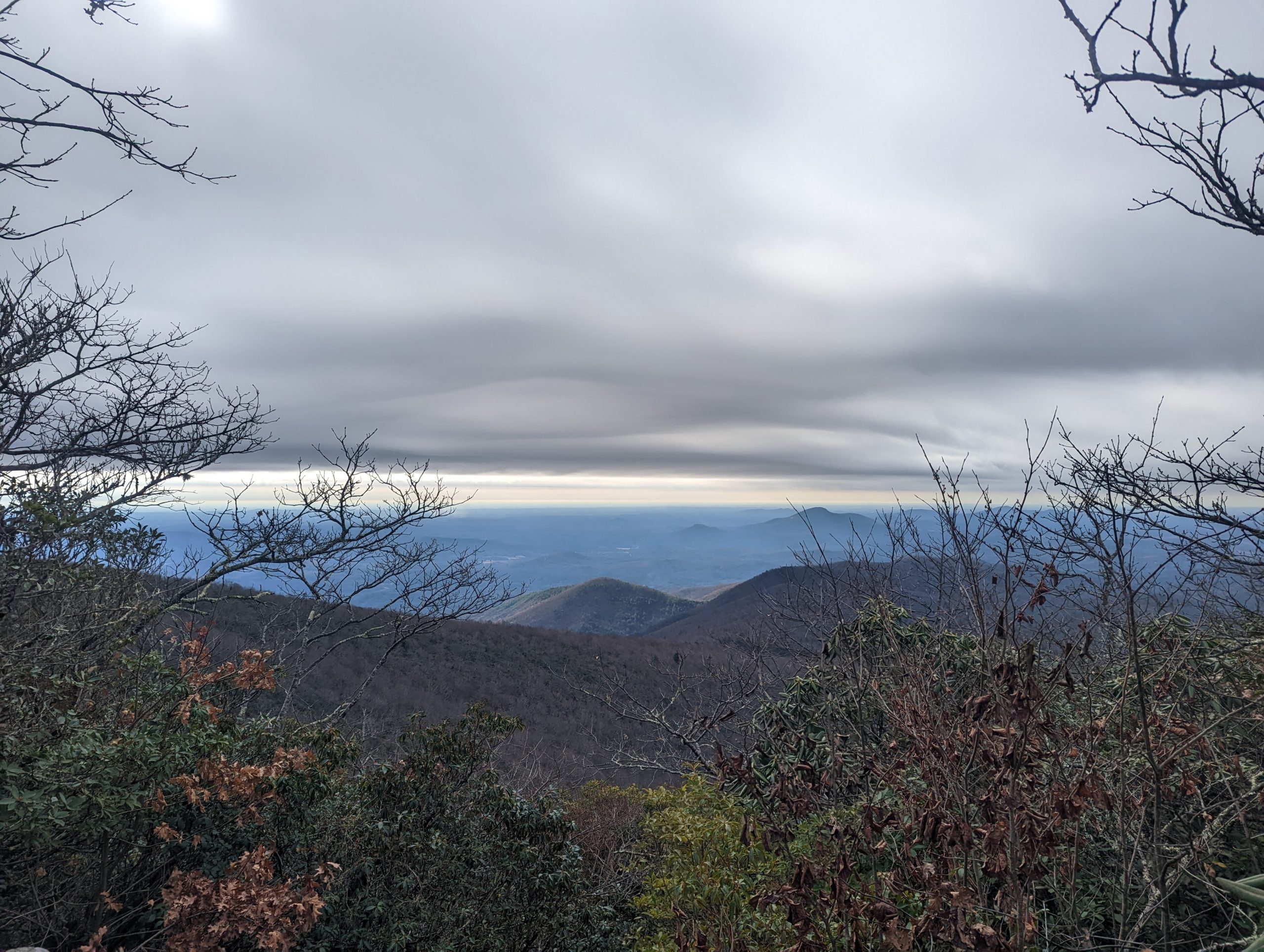 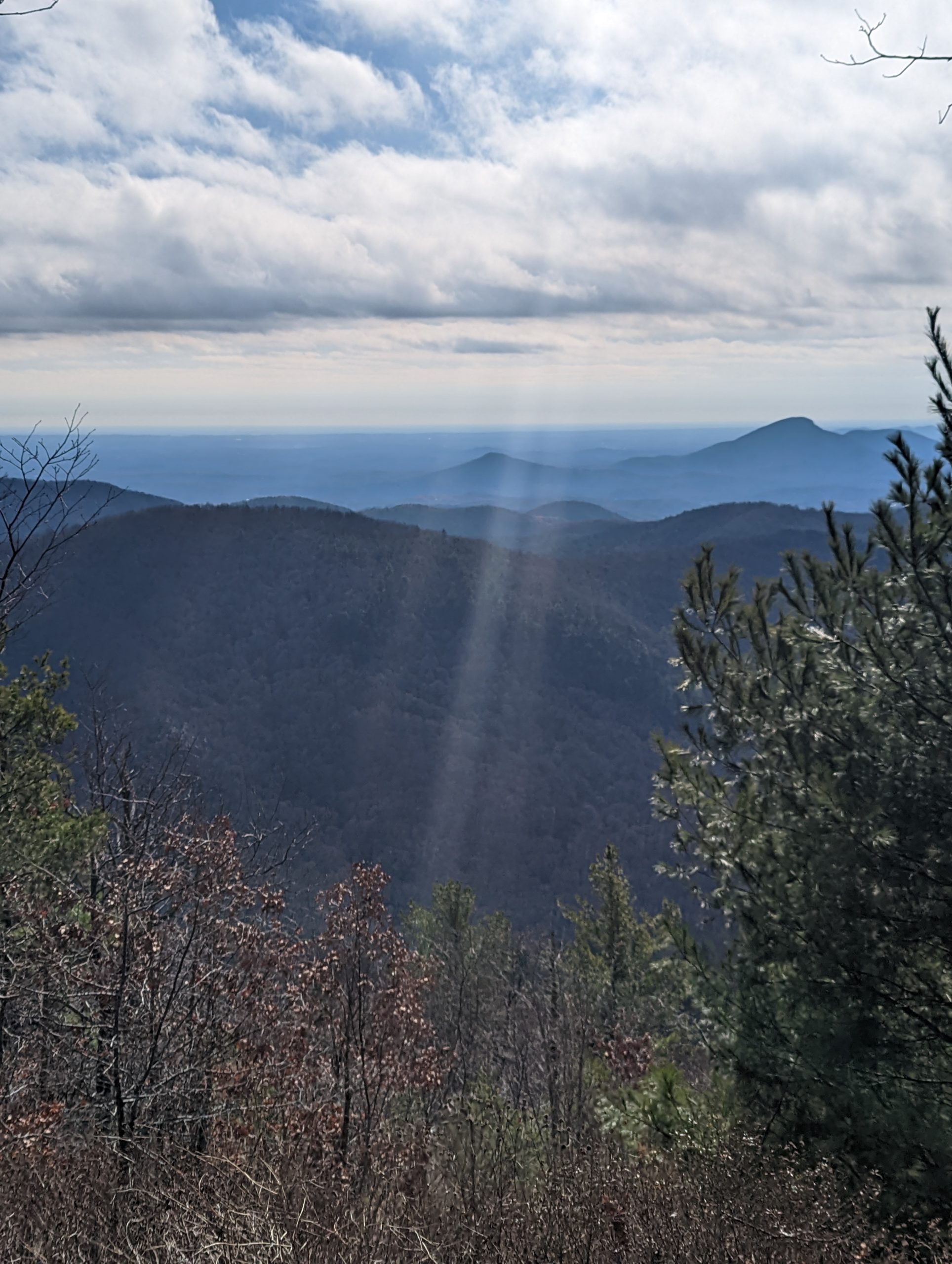 We arrived at the shelter a little after 5PM.  An hour later light rain started to fall.  Based on the weather report we had, this storm could turn severe quickly.  This shelter was not enclosed in the front and we had more exposure than we would have liked. We decided to set up our tent in the shelter for an extra layer of protection.  This is our first time setting up a tent inside of a shelter and this not something we recommend at all. In fact it’s extremely frowned upon when hiking, however based on the severity of the incoming storm and that we haven’t seen any other hikers in days it seemed like a good decision.

When the tent was up, over half of the shelter was still open in case a hiker comes in late which is unlikely in these conditions. Most hikers will bunker down until the storm passes. We settled in for a long night, happy to have a layer of protection against the strong winds blowing rain into the shelter.

The storm hit hard overnight but we stayed warm and dry inside our tent.  Oh how we’ve missed being in the tent.  This is likely our last night in the tent.  We have so many good camping memories and it’s been such a reliable shelter for us.

With a short day planned, we enjoyed a much later start as the system lingered.  The rain tapered off a little after 9AM and we set off in heavy fog. 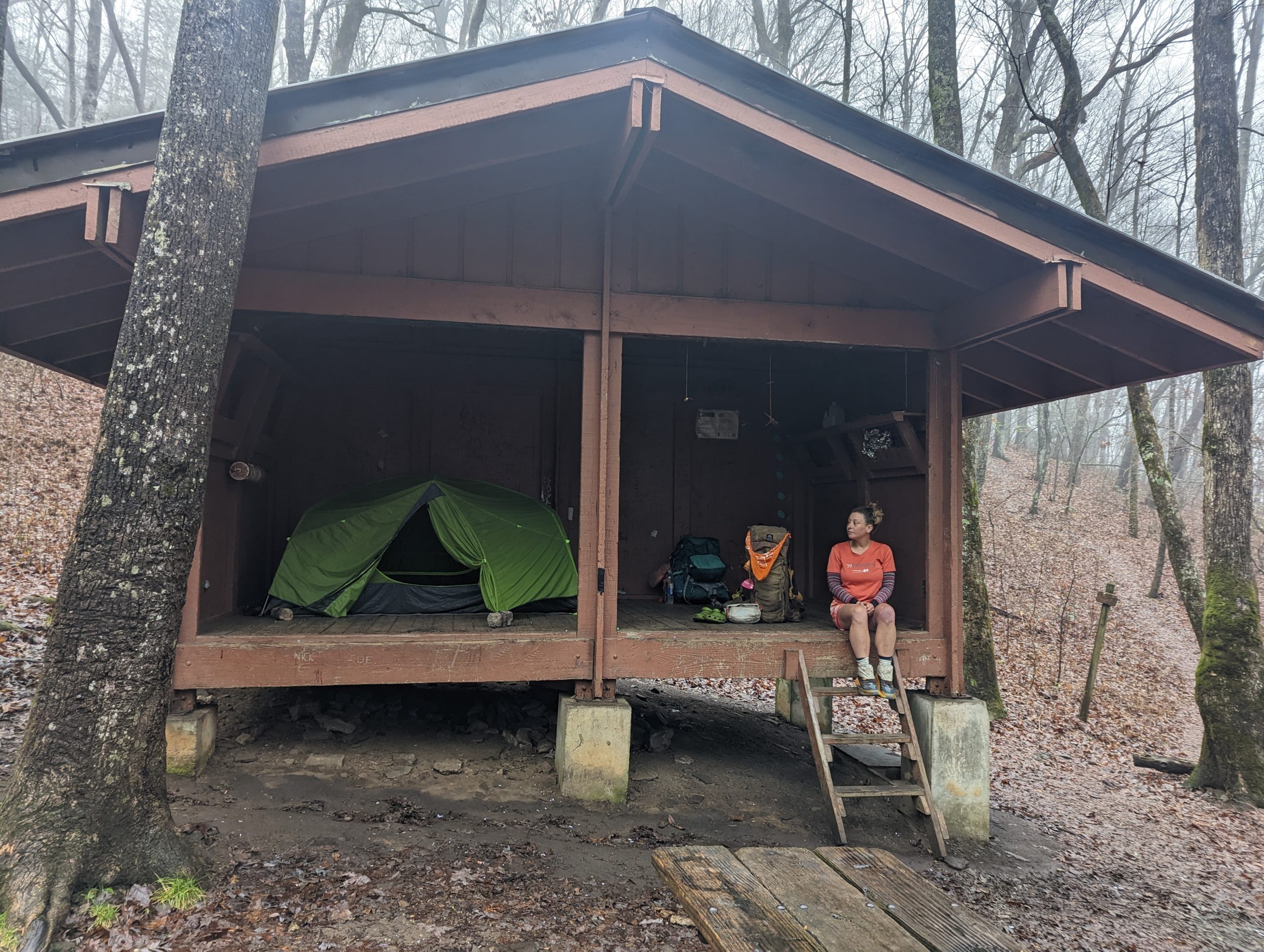 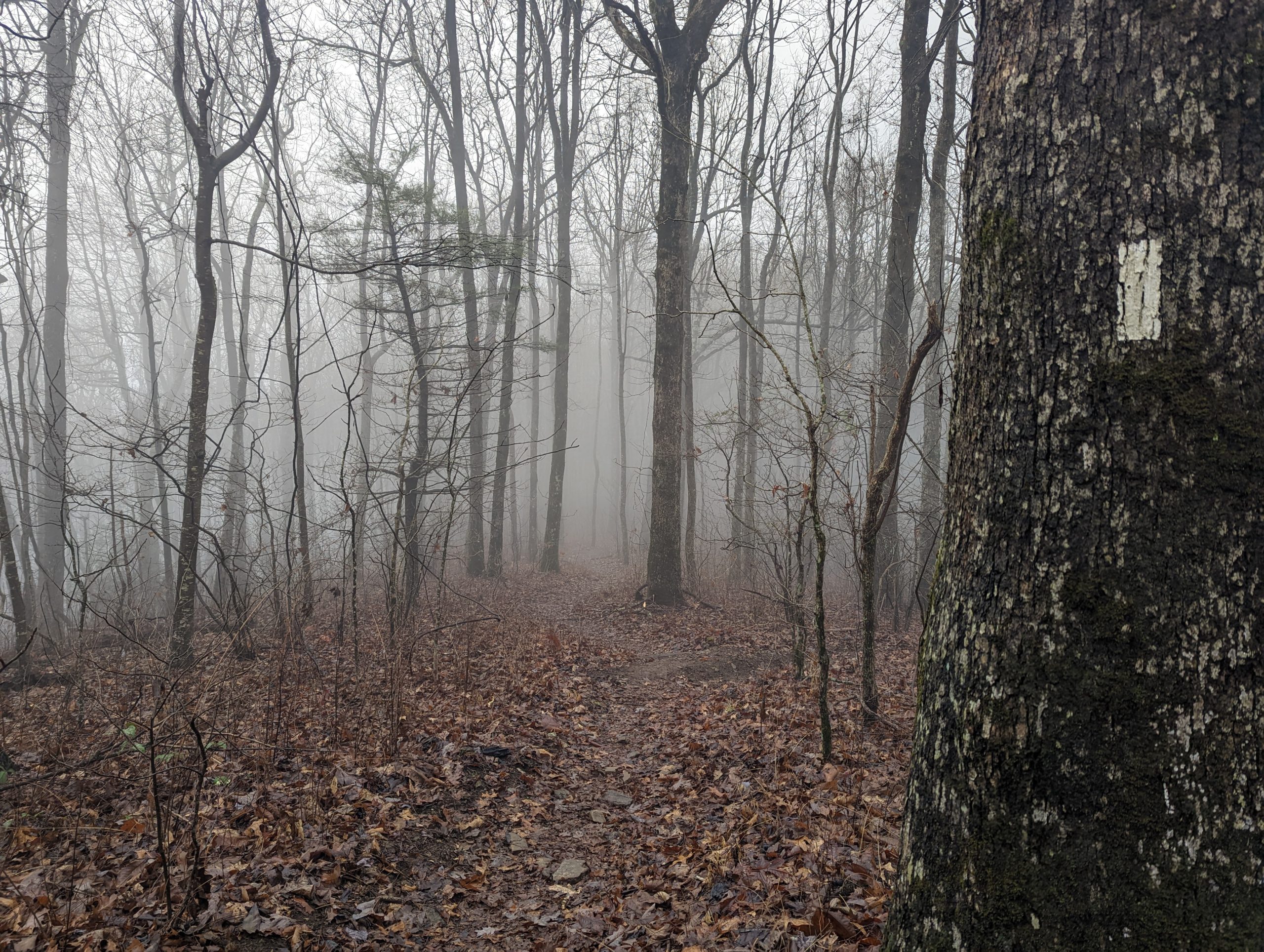 The trail was also a sloppy mess.  We trudged along, slipping and sliding along the way.  We did find refuge at Mountain Crossing, an outfitter at Neel Gap.  Just over 30 miles from Springer, this is where a large number of perspective northbound thru-hikers call it quits. If the trail does get the better of you, it’s tradition to throw your shoes up in the tree.

To our surprise, Possum was at Neel Gap.  The last time we saw him was back in Pennsylvania.  He has been pushing marathon days for the past two weeks.  He is also about to finish the Triple Crown.  This impressive achievement is when someone completes the three major long distance trails in the US (Appalachian Trail, Continental Divide Trail, and Pacific Crest Trail). 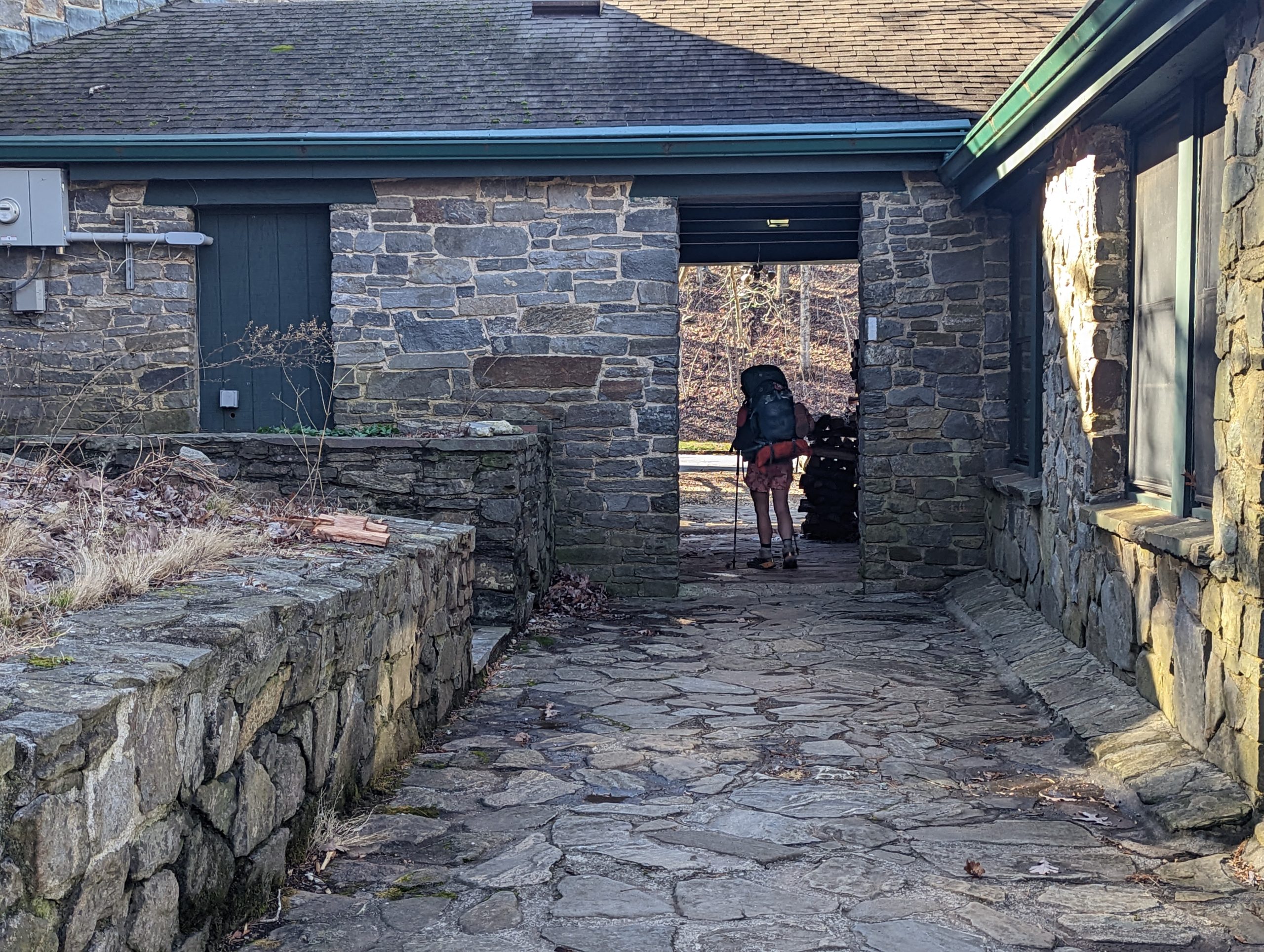 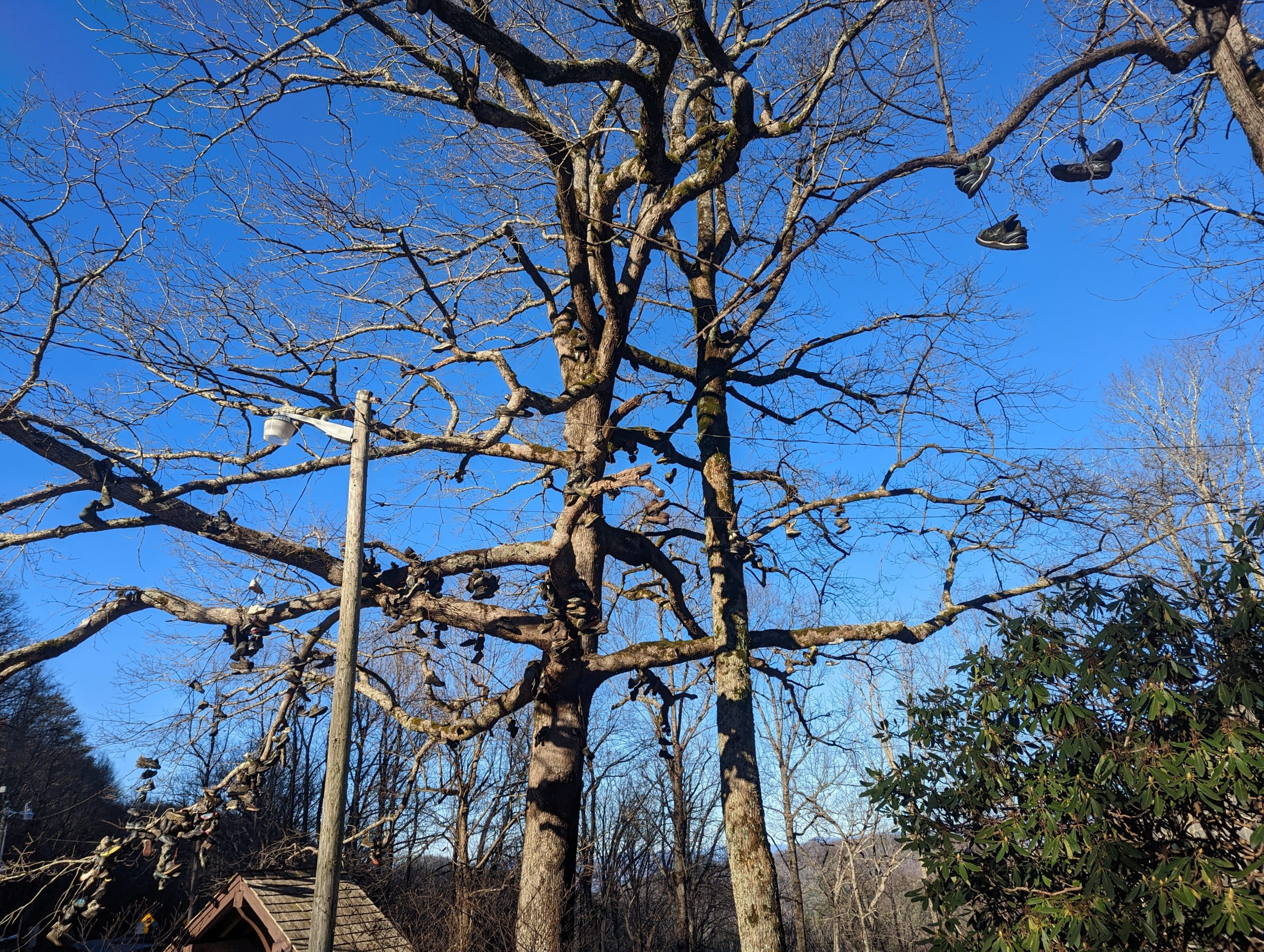 The temperature had risen to nearly 60 degrees by 10 AM.  As the system moved east, the colder temperatures followed and dropped back into the 40s by noon.  We took some time to warm up by the fireplace inside the outfitter and eat some of the last items in our food bags.  They are getting so small and it’s strange knowing there will not be another resupply.

The temperatures continued to drop and we finally found the strength to leave to warmth of the outfitter. After Neel Gap the trail climbs to the summit of Blood Mountain.  This will be our last time above 4000 feet. The trail was gentle and we enjoyed some great views with clear skies at the summit. 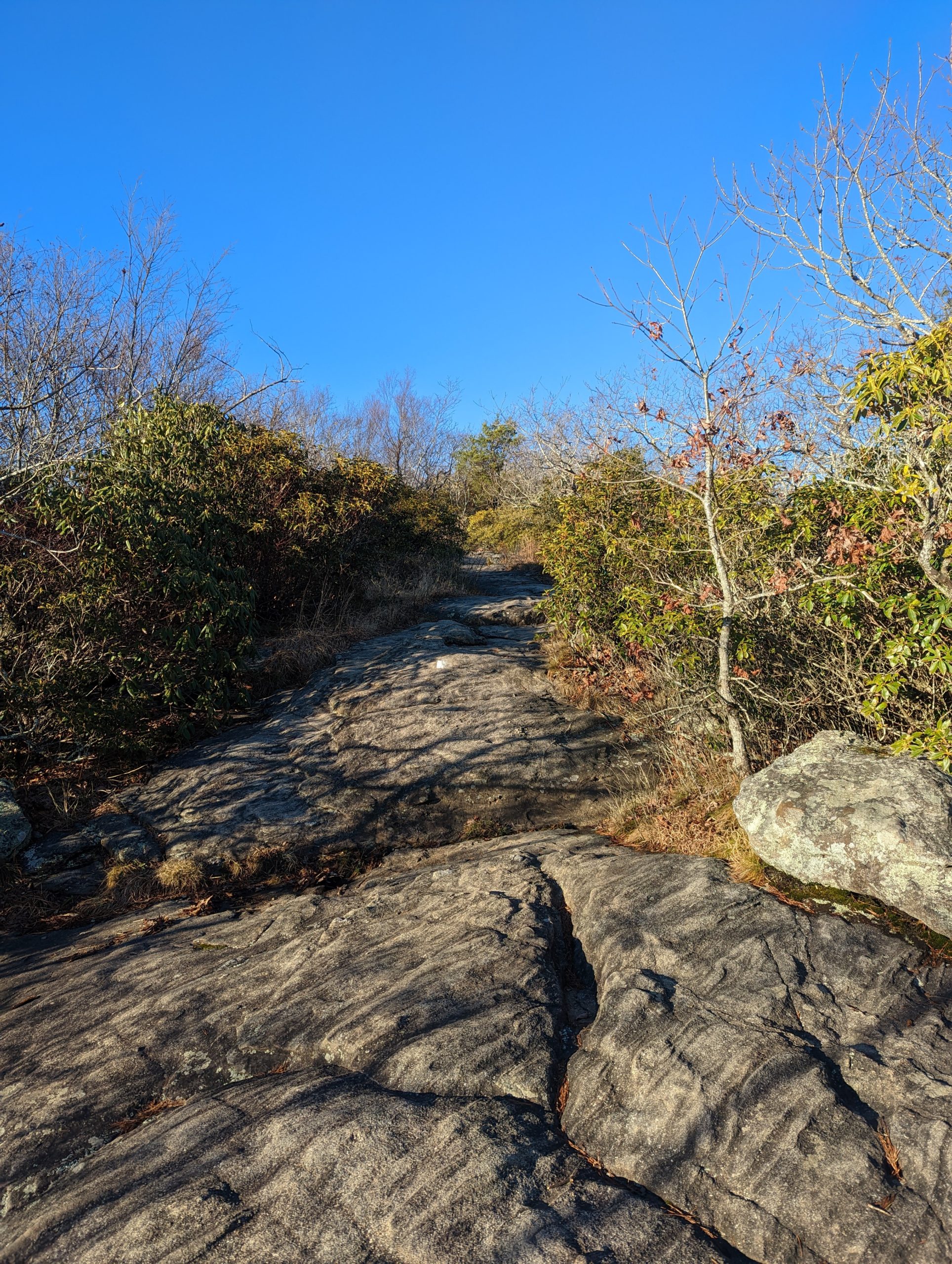 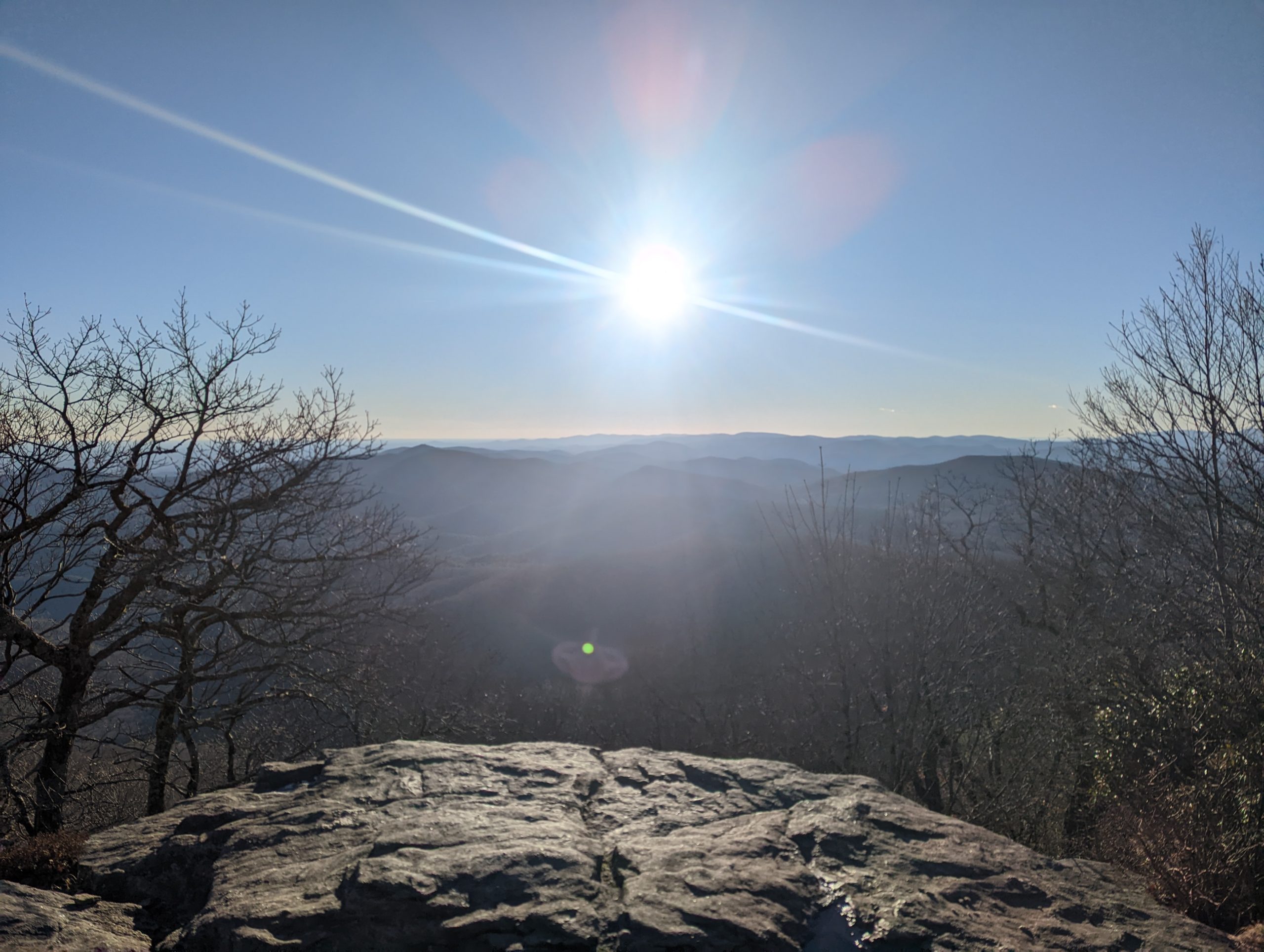 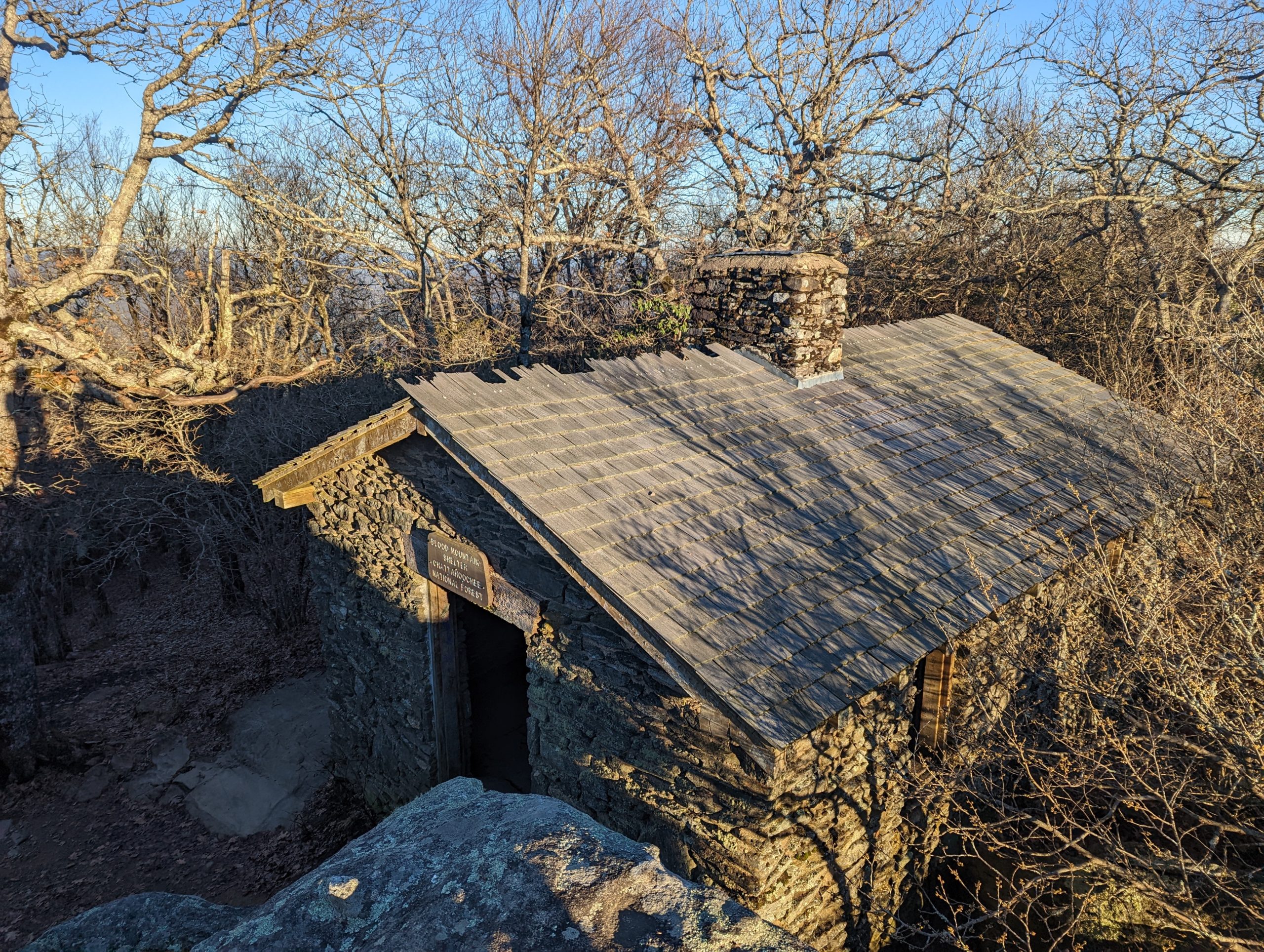 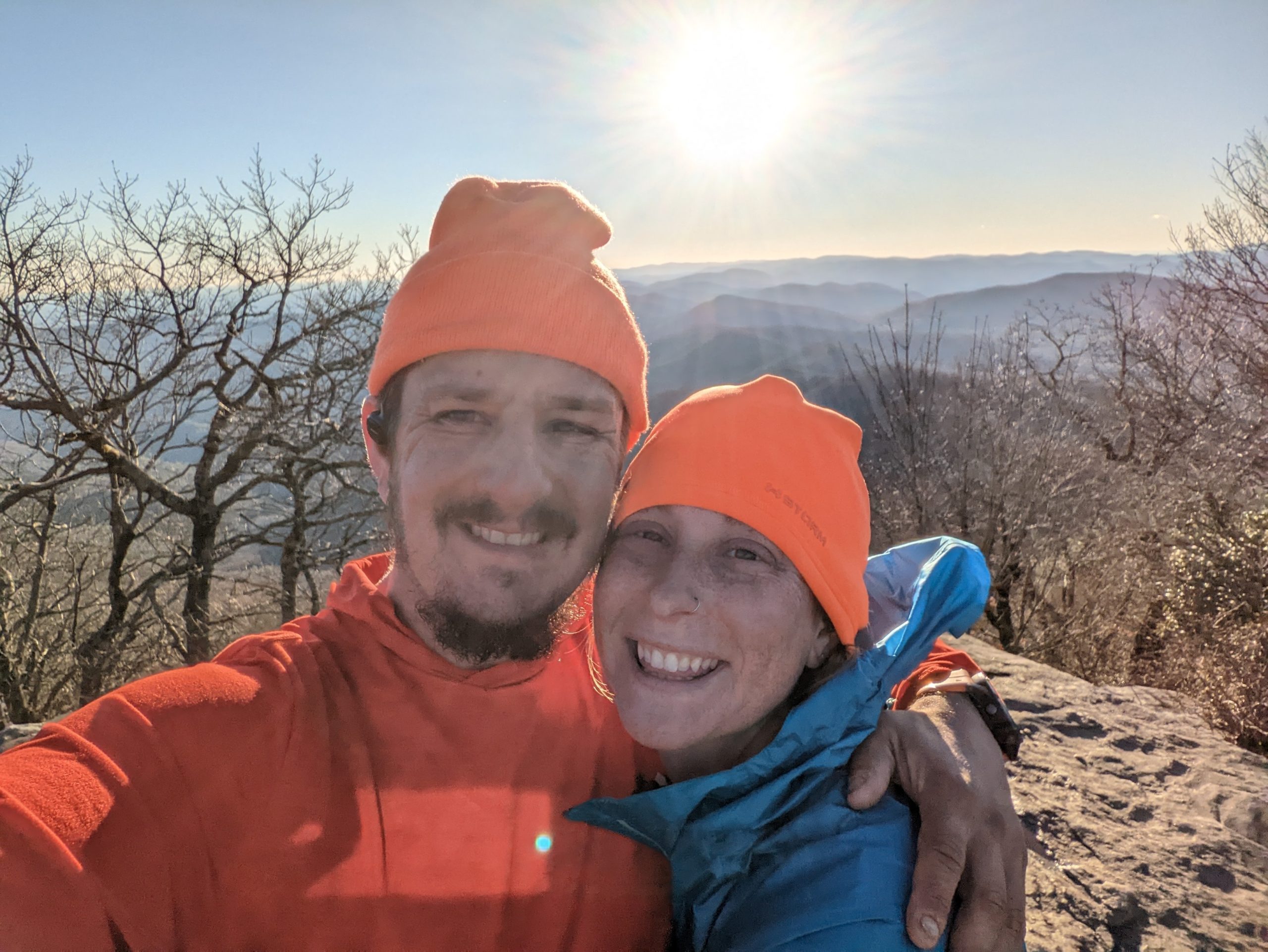 The backend of this system has delivered cold, windy weather.  Even while moving, it was challenging to stay warm.  We arrived at Woods Hole shelter just before sunset and enjoyed seeing the colors through the trees.  This is likely our final sunset. 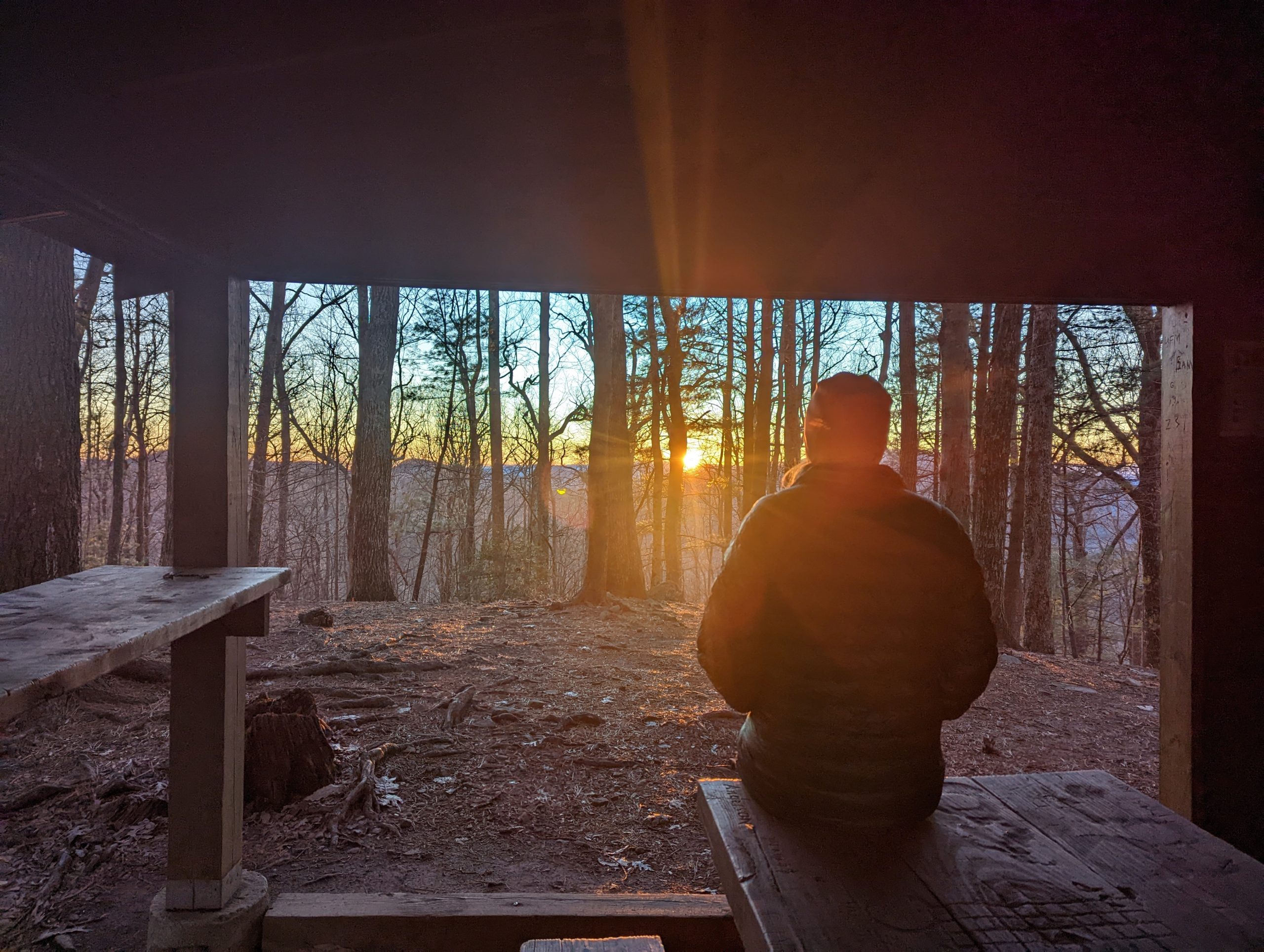 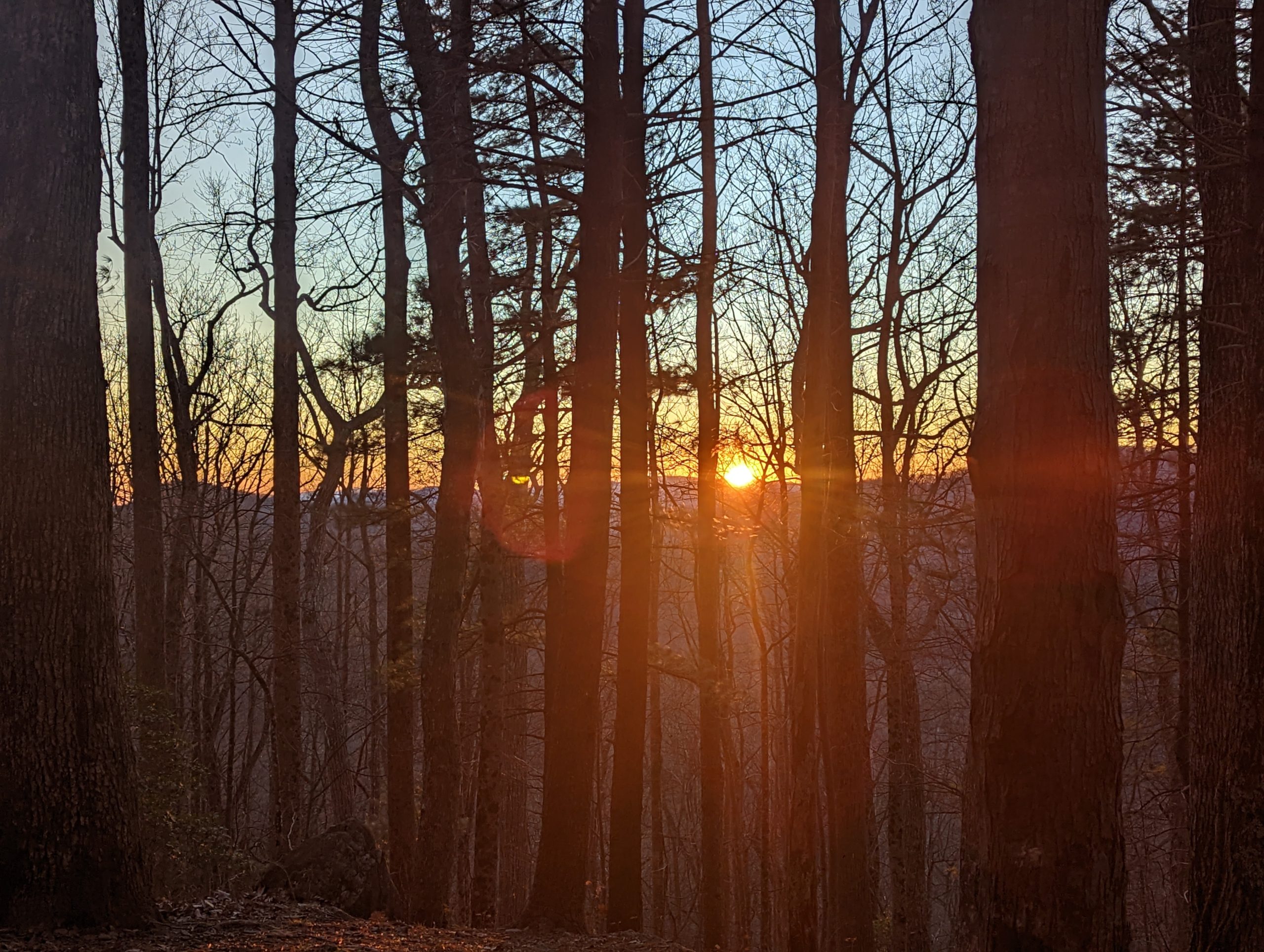 We crawled into our sleeping bags to warm up as the temperature continued to drop and winds picked up. We were protected from the brunt of the wind but we still felt it swirling around and into the shelter. It was going to be a long and cold night. 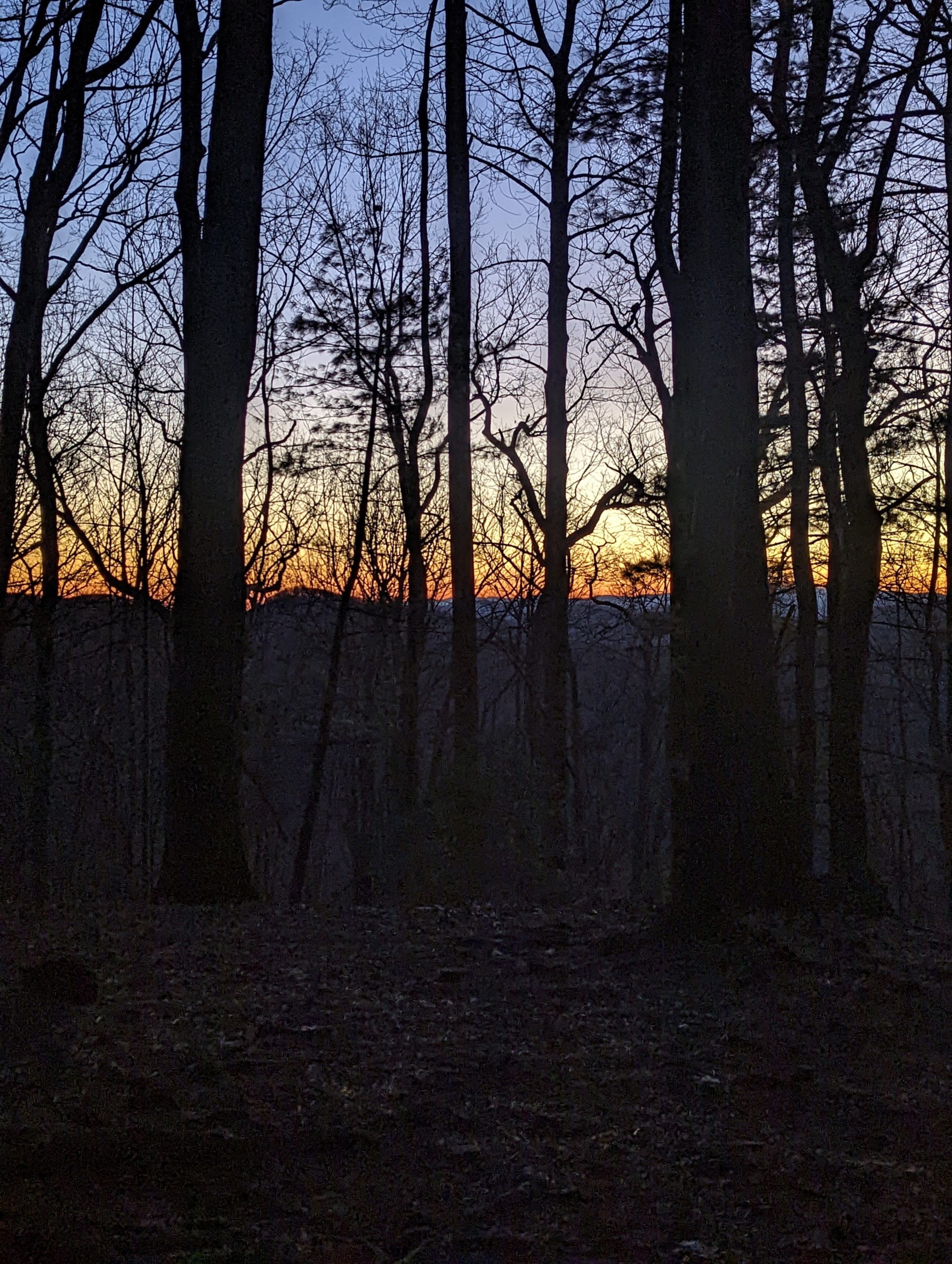 It was definitely a very restless night, likely within the top 5 worst nights on trail.  Even though the shelter blocked the majority of the wind, the bitter temperatures remained overnight and into the morning. The floor of the shelter itself was a major issue as the boards all had gaps between each one. The winds swirled under the shelter and up through the floor cracks into the shelter, chilling us more than we had expected. Even with the ground cloth for our tent under us we still shivered all night.

To our surprise we also ran out of fuel.  The recent string of cold temperatures has impacted the efficiency of our stove.  Ugh, we miss calculated by one day.  Following some unsatisfying lukewarm coffee, we packed up slowly as our numb fingers didn’t allow us to move as fast as we wanted.

We hiked the .4 from the shelter back to the trail.  Another major bummer, most thru-hikers won’t go to a shelter when it’s that far off trail but this area didn’t give us any other options. Once on trail, we sluggishly continued south. The lack of sleep and the cold winds combined with the general sadness this journey was ending tomorrow started to seep into our souls. 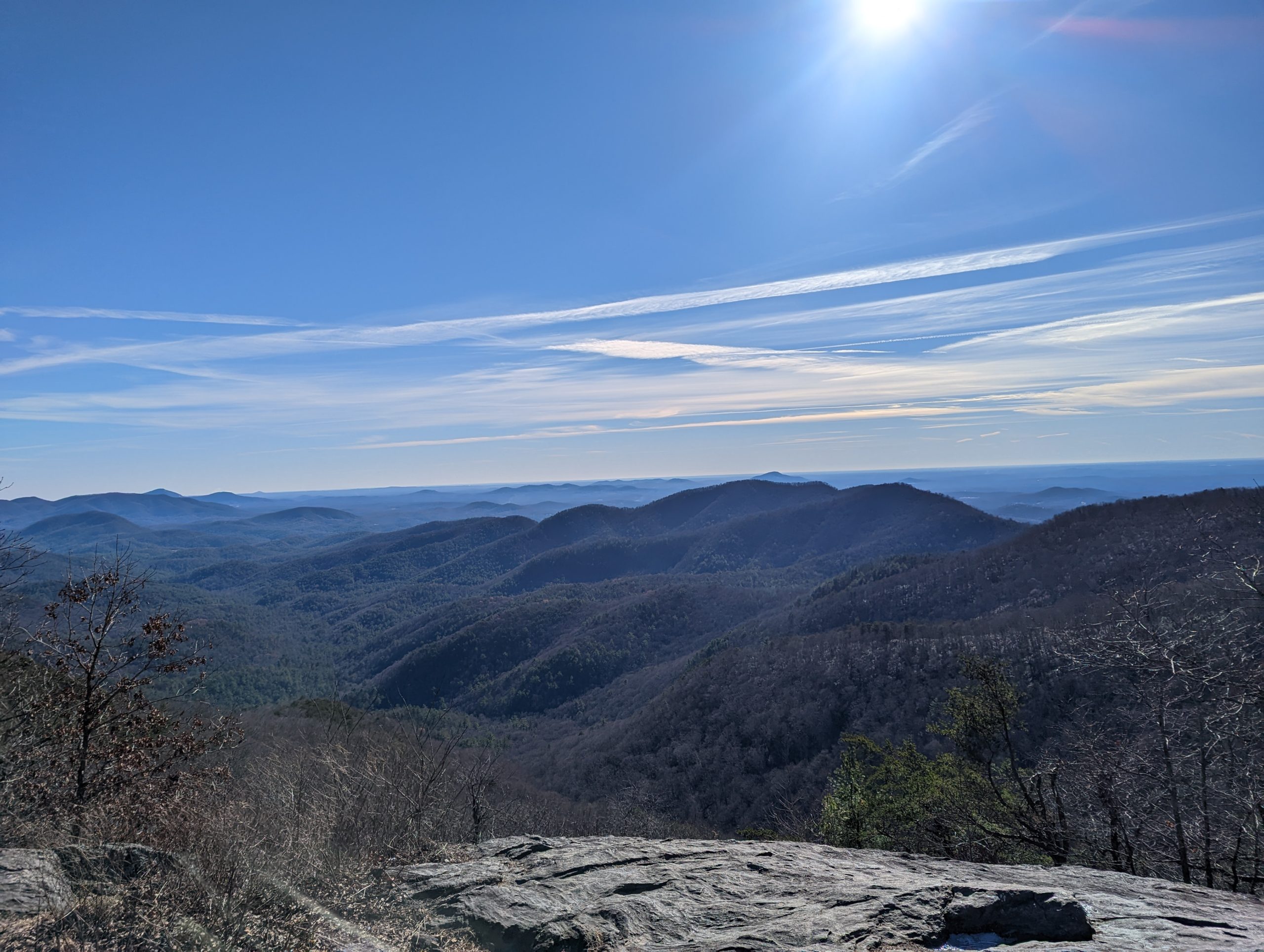 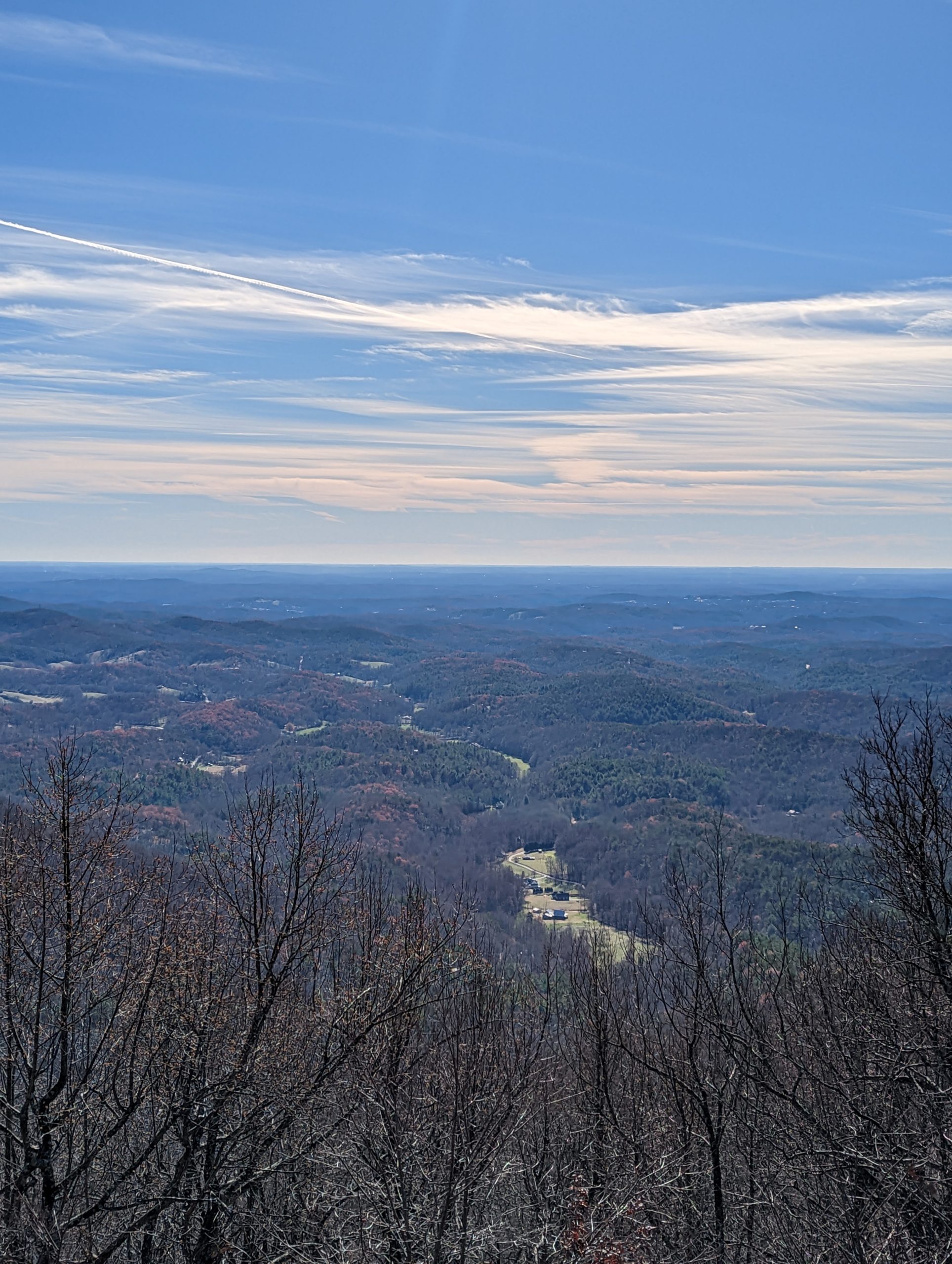 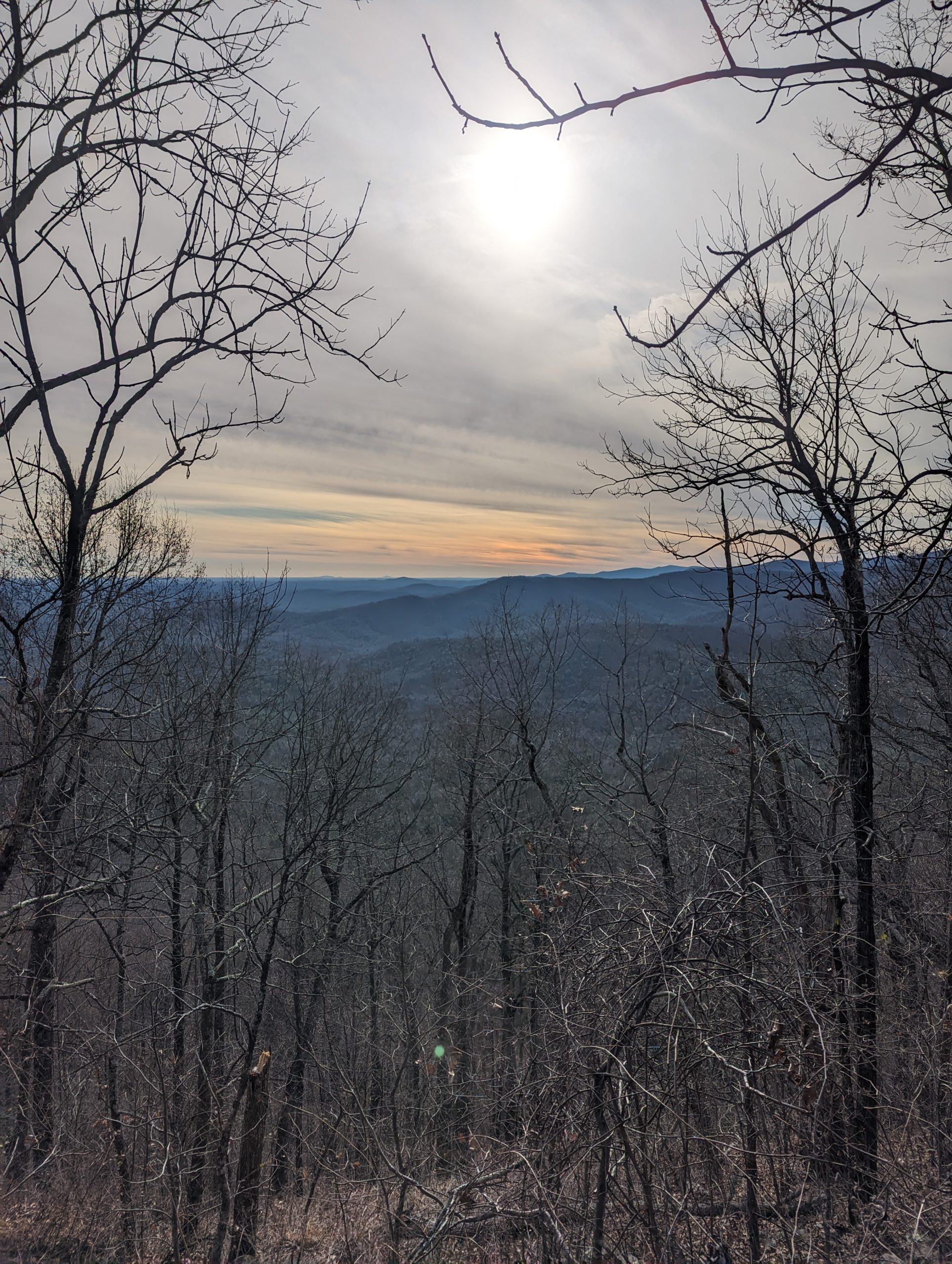 We arrived at shelter and focused on one of the few things we could control: gathering firewood.  We were a bit sad we wouldn’t have a a final hot meal on trail but we would have a fire final fire.  Shortly after we started gathering wood, a pair of section hikers (Andrew and Ron) showed up.  They also started to gather wood.

The Appalachian Trail is an incredibly special place.  We have loved our time on trail.  Tonight we would receive our final and best trail magic to date.

Once we had the fire going we started chatting.  Ron and Andrew had packed out several beers and gave us each one in celebration for finishing our journey.  Awesome!  Hayley started to make dinner, which was going to be cold instant potatoes.  Ron saw this and said he had an extra fuel canister we could use for dinner and our morning coffee.  We were overcome with joy. 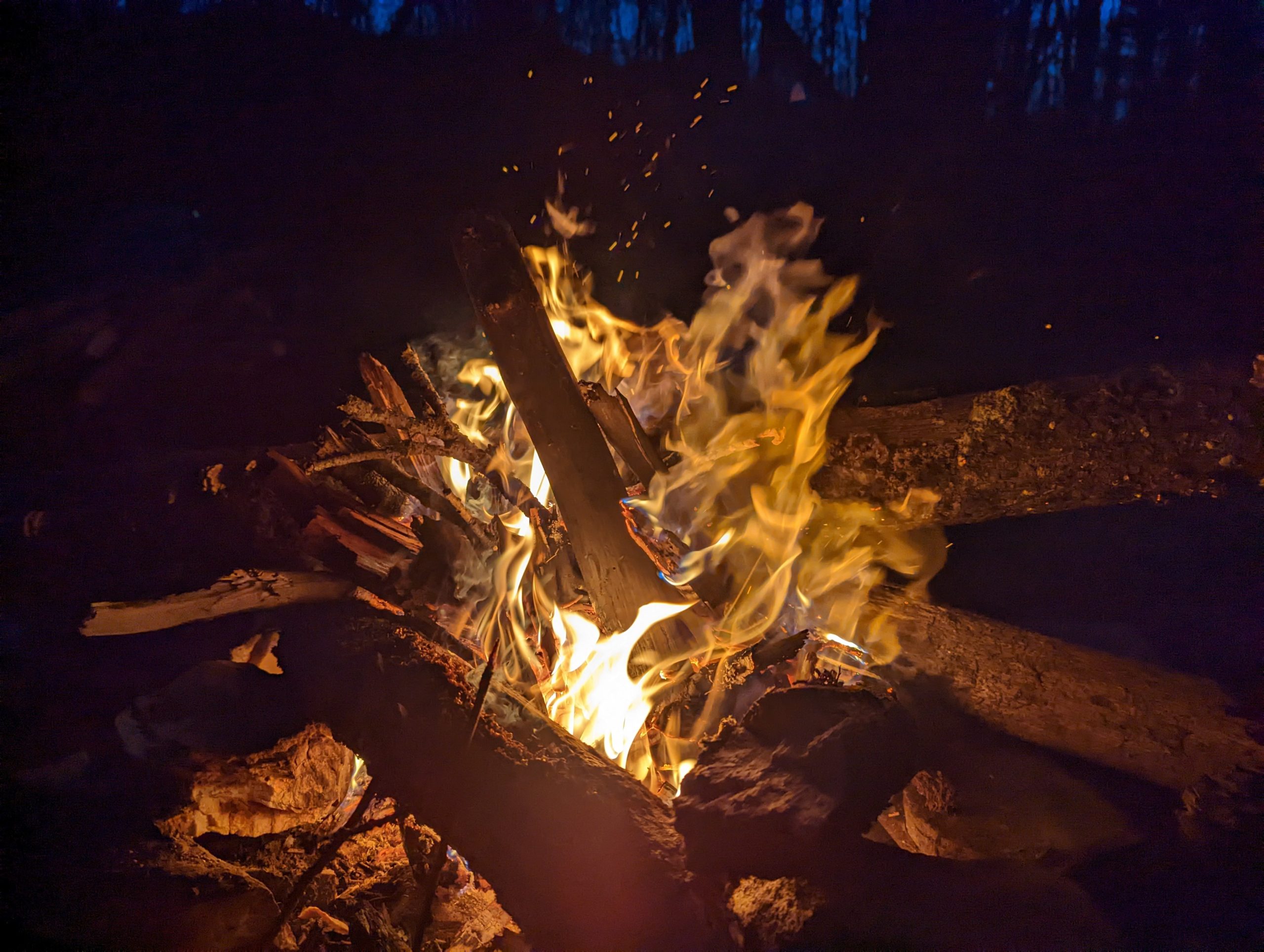 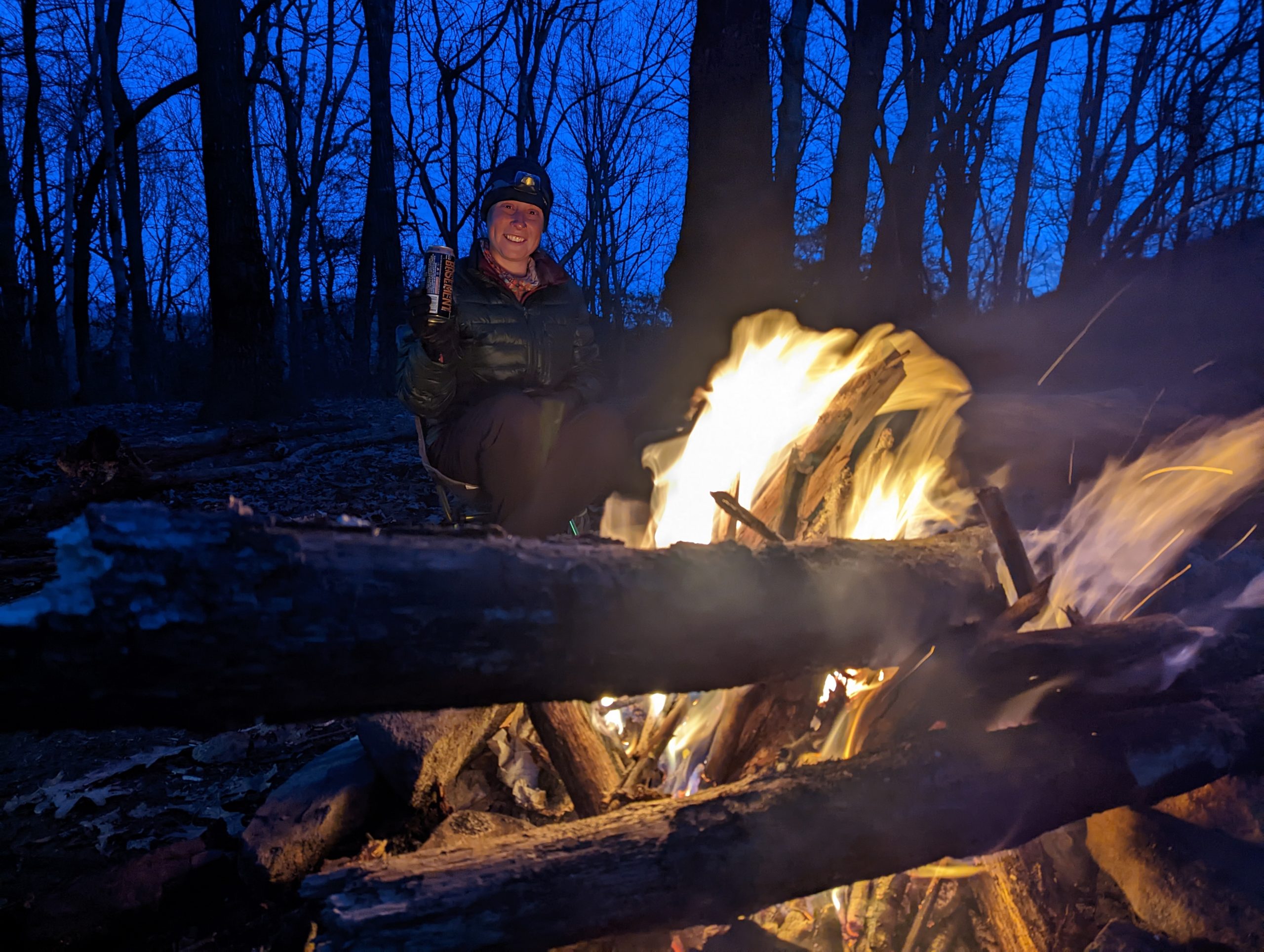 How could this be?  We started the day prepared to eat cold potatoes and likely forego coffee on our final morning.  Now we’re sitting around the campfire, with beers and a hot meal.  The Appalachian Trail always provides and it’s really the people that make it special. The best trail magic is when you least expect it and need it most.  This was an amazing experience for our final night as our hike reaches the culmination.  We’ve had thousands of great memories on trail but this will likely be one of our favorite. We can’t thank Ron and Andrew enough for their kindness and for giving us a great final night on trail. 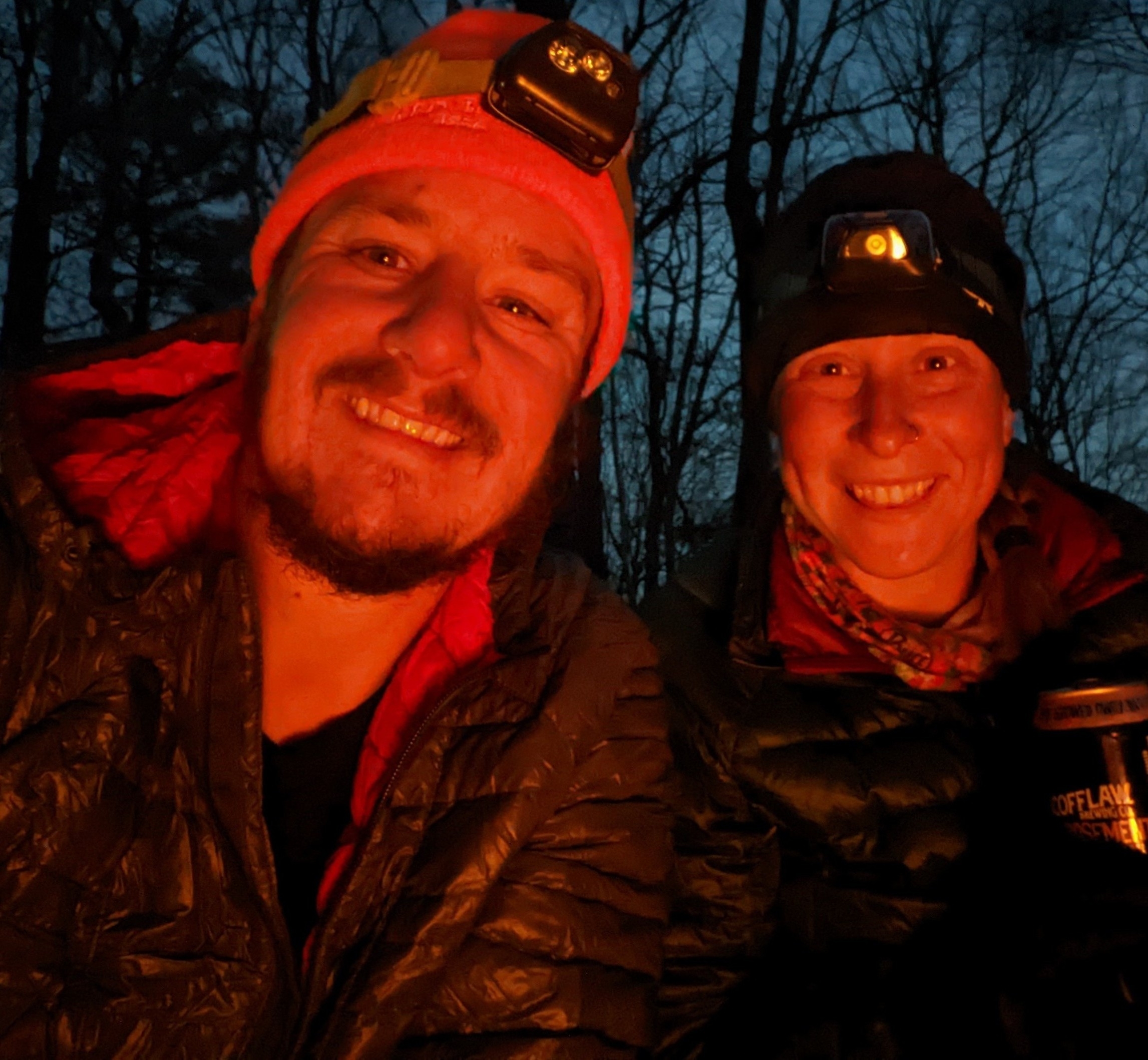