None of us slept well in the shelter. Between the acorns falling on the metal roof to the mice scurrying above us, it was an extremely noisy night. I noticed a hammock in the morning meaning that someone must have arrived after 10 pm. I sleepily walked until I went on an excursion to Bull Bridge (a covered bridge) where there was a gas station- to charge my phone and get some frozen Indian food. The trail followed a river for a while until climbing up a random mountain just to descend right away. At the bottom I crossed into NY state but to my disappointment there was not a welcome sign for New York (no selfie). I walked the last half of a mile in the dark. I cooked dinner and headed back down the trail to the water source which happened to be a hand pump. It took a lot of pumps to get the water going and it came out in awkward gushes making it hard to fill my water bag. Every time I stopped to breath I’d have to prime it again and by the time I was done I was panting and my arms hurt. I threw some pure water tablets into my water because I was too lazy to filter and went to sleep.

I slept very well, quite possibly too well because I did not want to wake up the next morning. I made coffee and spoke with another hiker who was passing by. I was just putting on my boots when one of my socks ripped. Angrily I dug around in my pack for my spare pair. I had a late start for the day but the walking was pretty easy and I was making good time. I came across a bunch of fallen trees and slippery boards which slowed me down. I reached the road and got an ice cream sandwich at the garden center and then a ride to Tony’s Deli because I’d heard about it. It wasn’t worth the half mile walk back. I felt sick, like I needed to vomit. I made my way past the Appalachian Rail Station (a bench)-it stops once a week to bring AT hikers directly into NYC, and through a marsh on a really nice board walk. I still felt sick and had to resort to a tums. Whatever I had eaten hadn’t sat well and I didn’t make it very far before giving in at the first shelter I came across. Luckily no one was there so I settled in for an early evening of peace and quiet.

Delivery on the AT

I woke up at first light and packed in dark. The first few miles seemed to glide by and I only stopped to eat a granola bar. Most of the walking was on top of a ridge with a few views along the way. After lunch I started to suffer from some skin irritations and had to throw on a lot of gold bond powder. I slowed down a little but at 6 PM I arrived at my destination 17 miles down the road. I had arrived at RPH shelter (hidden away close to some private houses). At this shelter you can order delivery food and I called a local Chinese restaurant to place my order. A little later a delivery man walked up to the picnic table carrying my food. I was so excited I demolished all of it (it took awhile). Then I settled in one of the bunks, alone in the shelter once again.

It was very cold the next morning and I snuggled in my sleeping bag for awhile. Eventually I made some coffee and started hiking a tad late. Once I was on top of the ridge the hike was pretty flat and mostly downhill. I passed Fahnestock lake which glittered below me. The beaches seemed to call to me but I had to resist and move on. I continued until the sun was falling and spotted a fire ring next to some flat land across a stream and set up camp. The low of my day happened later that evening when my pot slipped and my ramen fell to the ground. Luckily I had a backup meal! 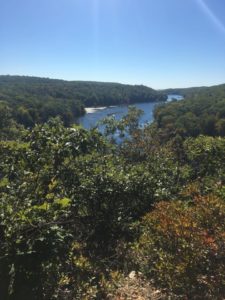 I tried my best to wake up early and take no stops for the first half of the day. I was meeting my Uncle John near Bear Mountain Bridge, and trying to beat rush hour. I took my first break of the day at the Appalachian Market gas station (at a road crossing right on the trail). It was lunch time, and they had a yummy deli on site next to the trail. I ordered a burger and fries and after eating hiked on. Unlike other deli visits I did not feel sick afterwards but I missed a turn somewhere along the way and realized fifteen minutes later that I wasn’t on the AT. I had to backtrack a little, but I found it once more. I had to climb up to the ridge once more but on top it was mostly smooth sailing. It wasn’t completely easy because of bugs (I don’t know what type) kept buzzing around my head driving me absolutely nuts and my skin was having irritations again. Eventually I made it down to the road and met up with my Uncle John Forsyth and we drove back to Larchmont NY. There I enjoyed some lovely food prepared by my Aunt Linnet and a lovely zero day followed including more delicious food (including bar taco)! 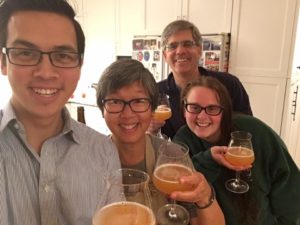