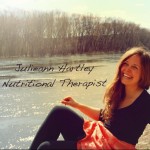 Kidnapped and Sidetracked : The Chronicles of Squirt Continued

Let me say this: the trail is more than I ever imagined. The people are amazing, the trail is beautiful, the experiences are worth more than every dollar I’ll ever earn. But, the trail is also harder than I ever imagined. It is not that the actually terrain is terrible, but it’s the day to day impact on the body, the logistics, the bugs, the heat, the pain, the combination of it all everyday that makes it so much harder than I thought. I will not give up as long as my legs can move forward, but for now, I’ll say that I now know deep in my heart and soul that I am one strong, powerful, positive and worth-while human being.

I have put many miles in since my last post and although I have a hundred funny stories to share, I’ll keep it focused on the four most exciting things that happened to me: wild ponies stole my backpack,  I was “kidnapped”, I saw the sunrise on McAfee’s Knob and I found myself in California for a handful of days. 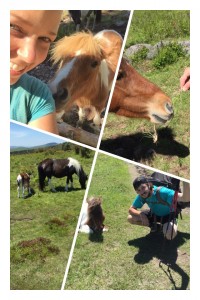 So, where am I now? I am at my Aunt Gail’s house in Alexandria, Virginia. Whoopie and I were making our way through the Shenandoah National Park when our new friend, Hulk, informed us of a massive storm front coming our way, which would produce 2-3 inches of rain and damaging winds. Whoopie and I are adventurous folks, but we have had our fair share of rain and I decided to call my Aunt and ask if I could hang out with her for the worst part of the storm. Thankfully, my Aunt Gail and Uncle John were able to come and pick us up from the trail… taking us to DC! I was able to get new shoes AND celebrate equal marriage rights in DC the day after the Supreme Court voted. I could not have asked for a better off-trail rainy day. 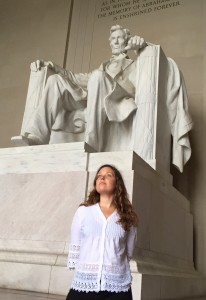 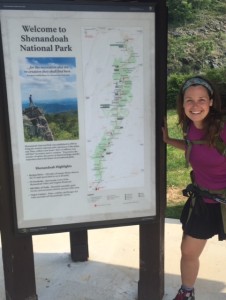 SEE YOU ALL SOON!

I'm a nutritional therapist and board certified music therapist planning on tackling the Appalachian Trail, starting April 2015. During the day, I work with children and adults with disabilities, helping them achieve their developmental goals with music therapy. In the evenings, I run a nutritional therapy consultation company, helping clients with a variety of symptoms! My goal is to hike the A.T. with the nutrient dense foods (think grain free, grass-fed meats and veggies kind of thing), so I can hike efficiently and have time to forage local wild edibles along the way. I also plan on being a bit of a minstrel, earning my keep at the occasional hostel and hut by entertaining the other hikers with my stories and songs. I hope to inspire other hikers to make music, eat well and appreciate each step of the journey. For more information about nutritional therapy, visit my website at: www.wildatheartnutrition.com