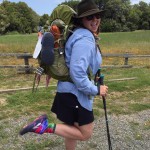 Base Weights: How I Lightened the Load

Base weight: the weight of your backpack without consumable goods such as food, water, and fuel.

My base weight a year ago was over 25 pounds, now it’s between 10 and 13 pounds, depending on conditions. I share my tent, but other than that I have taken no serious sacrifices to comfort or safety to make this dramatic decrease. I’ve worked hard over the last year since deciding to Thru Hike to choose gear that was going to get me to Katahdin. This included hours of research, and field testing gear.

It can be intimidating looking at the gear lists of “elite” hikers. Sometimes I would wonder how they even slept at night! Still, I knew that something had to give. There are places where you can easily cut pounds off your base weight though, without giving up comfort and safety. I’ll write a “What’s in my pack” post when our departure date get’s closer, but until then,

Here’s the Three Big Things we switched out to decrease our base weights: 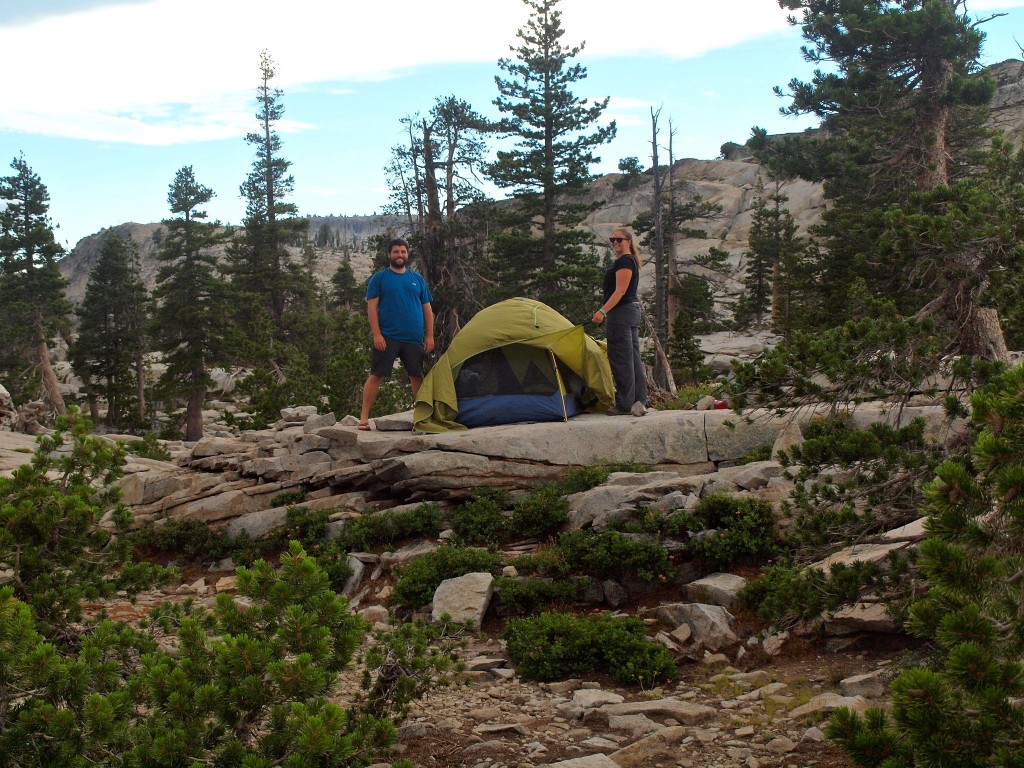 Eric and I setting up the Eureka Tent we borrowed from my Dad on a few of our first trips together.

When we started dating, Eric and I used a Eureka tent that my Dad let us borrow. I got tired of the weight, and bought myself a Big Agnes Copper Spur UL 2. It was a nice tent, pretty good weight, and easy to set up and take down. But we both have broad shoulders and are taller than average, and the UL2 was uncomfortably small. We decided that we wanted to “minimize potential future conflict” by getting a bigger tent, but we didn’t want to gain back the pounds to our base weight that we had lost by switching out to the Big Agnes tent. 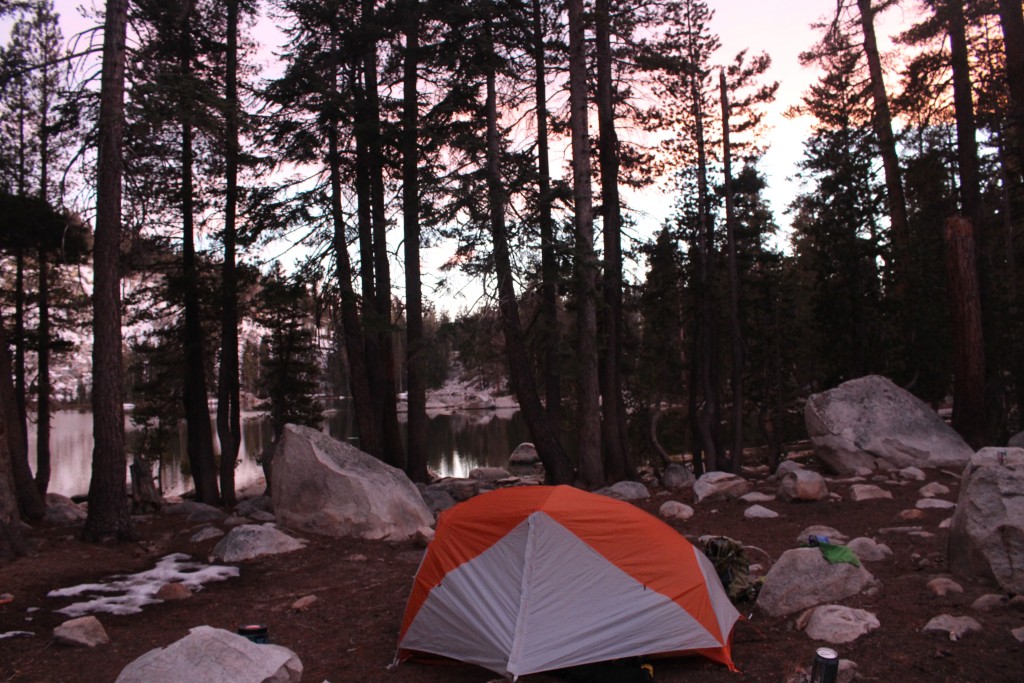 The Big Agnes UL 2 served us well, but for us, size matters, plus the Triplex is lighter! 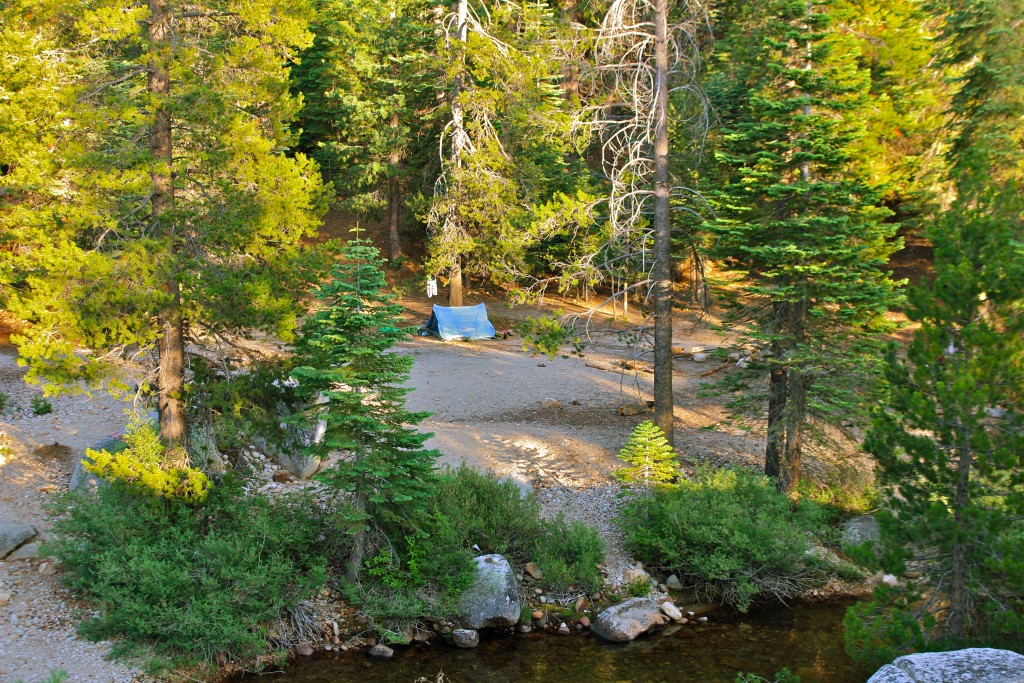 The Zpack Triplex, set up next to Illouette Creek, in Yosemite National Park, on it’s maiden voyage

We ended up settling on the Zpacks Triplex (23.8 oz, plus stakes) We are currently using 12 titanium stakes that add up to 2.28 oz, making the total for the tent 26.08 oz, under 2lbs for a three person tent!

Did the price tag hurt? Yes.

But oh good god the glorious space. I’ve taken it on two shakedown hikes and I am very pleased with this tent. Eric and I both fit in it with room to spare. For context, I’m 5’10” and Eric is 6’1″ so fitting both of us in a tent comfortably is such a treat I never thought was possible. Plus it’s darn light. In our current arrangement, Eric carries the tent and I carry the cooking gear. It comes out about even and we both end up carrying less weight. 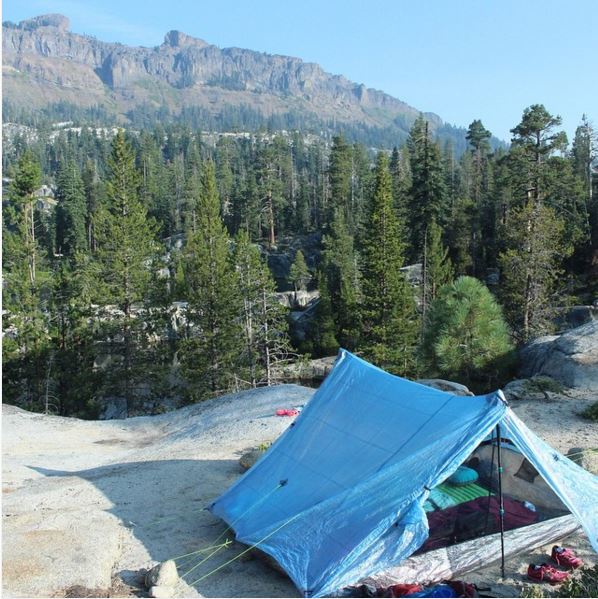 Cozy below the Dardanelles!

This tent isn’t going to be the right choice for everyone (Mostly because of the $$), but I would recommend it, or the other Zpacks shelters to anyone willing to swallow the price. They have consistently been well reviewed and they are some of the lightest fully enclosed shelters on the market.

I had a North Face 0 degree synthetic bag for years that weighed over 5 pounds but I get cold darn it and I 16 year old me wasn’t willing to compromise on warmth. I didn’t realize at the time that a high base weight meant harder hiking. But then one day I got tired of carrying it (note the motif). So I got a Marmot Angel Fire Sleeping bag. Not a bad bag, but I have never been a fan of the mummy bag style and it just didn’t keep me warm enough. Besides, it was heavier than I wanted to carry for the AT, despite the fact that it was quite the weight loss from my North Face.

I ended up purchasing an Enlightened Equipment Zero Degree Revelation (31.39 oz including the straps, less than 2 pounds again!) I love it. I honestly love it. I love it so much that for their Black Friday Sale I went out and purchased their Thirty Degree Revelation (17.78 oz with the straps) so I could have a lighter, less sweat inducing sleep during the summer. 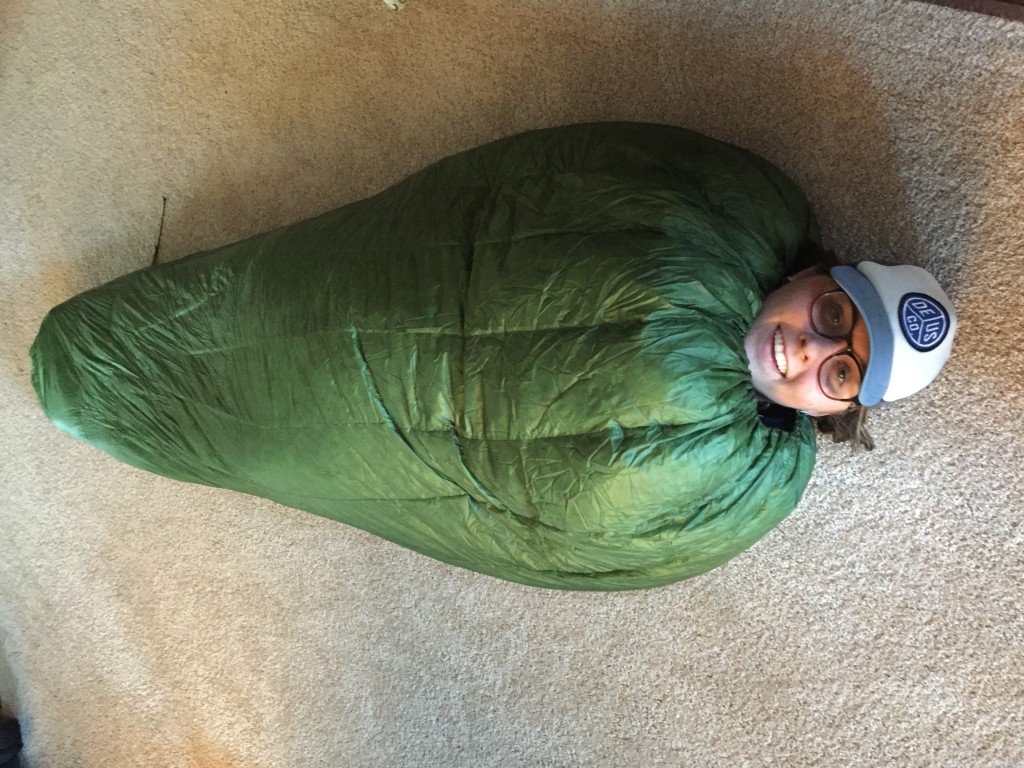 The best part of the quilt, is getting into it for the first time and flopping around on the floor while your family takes photos.

Eric made the move from a Sierra Designs Camp Bed to a Western Mountaineering Bag. His bag is nice, weighs less, and is warmer, but I’d be lying if I said he wasn’t a little jealous of the weight and price tag of my quilt. (I “discovered” backpacking quilts after he had already purchased his bag.)

A Sleeping bag is an easy place to lose pounds, especially if you are using an older bag, or if you are willing to transition to backpacking quilts.

When I started backpacking, I used old canvas external frame packs that my grandpa had to pull out the attic. They make for nice photographs, but I was thrilled when my parents bought me my first pack of my own: an Osprey Ariel 65L pack. It was blue. It had it’s own compartment for a sleeping bag. The Brain turns into a fanny pack! I was in love. 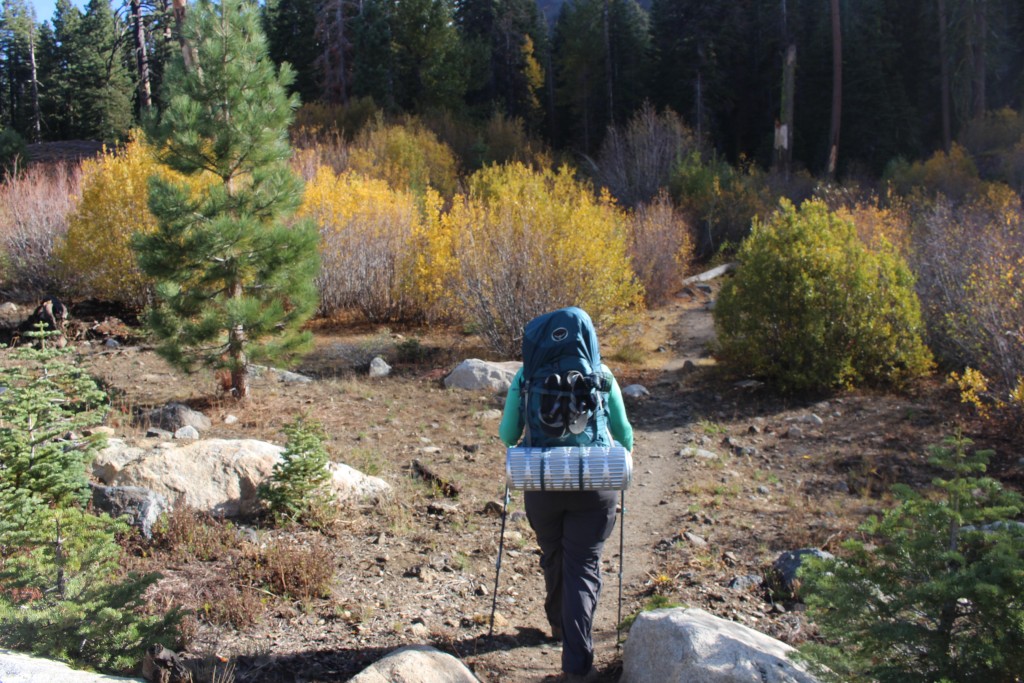 Great Pack, but the weight had to go!

To be honest, if I hadn’t been trying to dramatically reduce my pack weight I probably would have kept that pack till the day I died. It was incredibly comfortable and I really loved wearing it. But then I realized it weighed more than 5 pounds. I hadn’t thought of a backpack as a big contributor to a high base weight but… Ouch. I purchased one of the old style Aura 50L packs from REI before they discontinued them to move to the AG style pack that Osprey now makes. 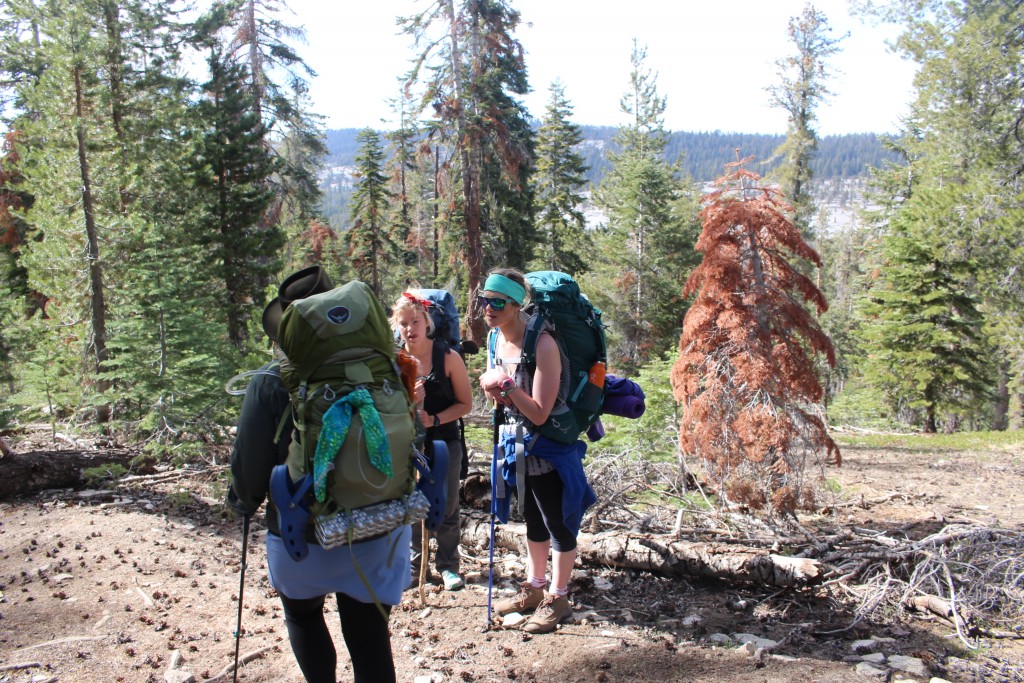 Trying to work out the self timer while sporting the 50L

I really liked my Aura, and since I had been cutting down on the amount of stuff I was bringing into the backcountry, I didn’t ever need a pack bigger than 50L, but again I made a switch. I found a great deal on a ULA Circuit 60L (41 oz) and I pulled the trigger. 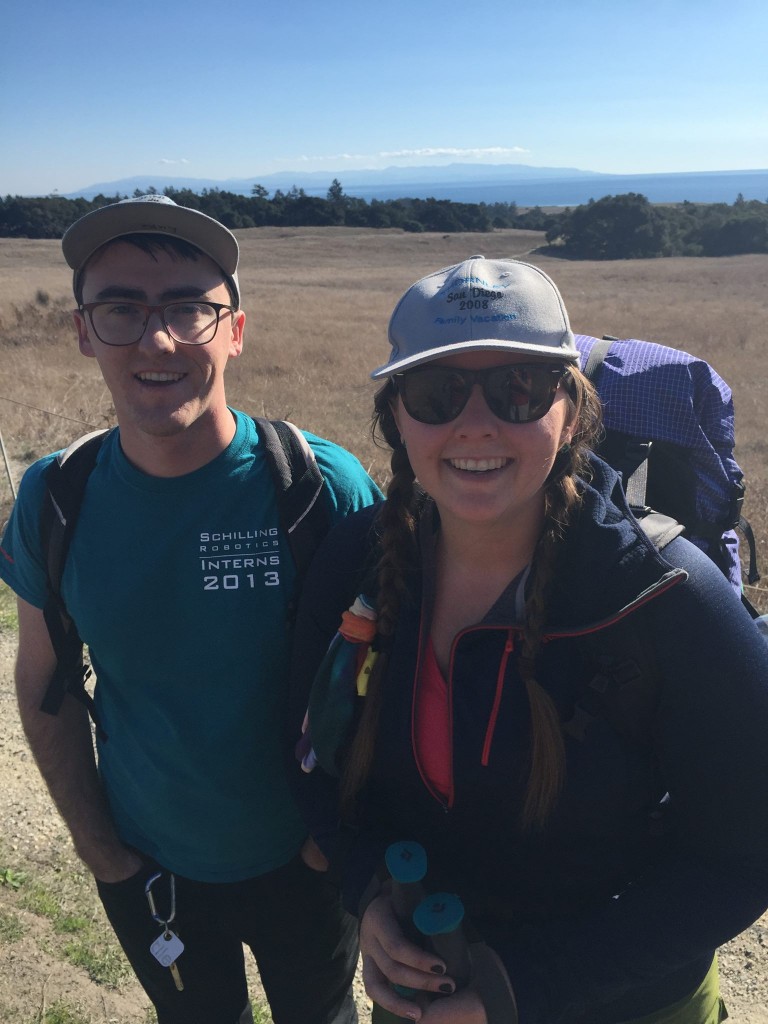 I tested out the Circuit on an 8 mile day hike with my family! At this point my pack weighs as much as their day packs!

(ULA gear comes up pretty regularly on Massdrop, which is where I got mine, so check Massdrop out if you’re in the market, and give it a few months if you aren’t in a rush since the sales come up periodically. If you’re joining Massdrop for the first time, consider using my referral link so I can get something cool out of it).

The Circuit is what I’m currently training with and so far, no complaints. It’s a smidge lighter, and it’s bigger. It has no bells and whistles which is just how I like it these days. I took out the bladder holder, since I’m not currently using a bladder to carry my water, and that got rid of even more oz.

Eric made the switch from a 70L Gregory to a 60L Circuit as well, so now we have matching packs and it’s very adorable.

Overall this means that my current weight for my big three is a little over 6 pounds, and guess what, since I’m not carrying the tent my weight is really closer to 4.5 lbs. When I started looking at getting new gear my pack alone was 5.2 pounds, my tent was about 6 pounds, and my sleeping bag was over 5 pounds as well! Thats a big three weight decrease of about 60%!

We’ve made some other base weight improving changes as well. We stopped using Nalgenes and bladders and started using plastic water bottles from gas stations. I told Eric he was no longer allowed to pack four shirts and two pairs of shorts. And he certainly couldn’t bring FOUR separate hats. (No really, babe, you can’t. I’m sorry)

I picked up a titanium cook pot, I bought a very small swiss army knife to replace my beloved 6 inch Gerber pocket knife.

One of our favorite purchases has been the R1 Fleece hoody from Patagonia. We are lucky enough to have a Patagonia Outlet in our town so we both got a really good deal on them, but I would even be willing to pay retail for this item, it’s that great! Cutting down on insulating layers has been a little anxiety inducing for me, with my fear of cold. Currently I think I’ll be bringing the R1 Fleece plus a Patagonia Nano-Air jacket for the colder beginning of the trail. The Nano-Air weighs more than my Patagonia Ultra-light down, but I’ve noticed it’s significantly warmer, and it’s still lighter than the Huge Fleece jacket I used to bring. Please let me know if you have any thoughts on the Nano-Air vs the Ultra light down.* 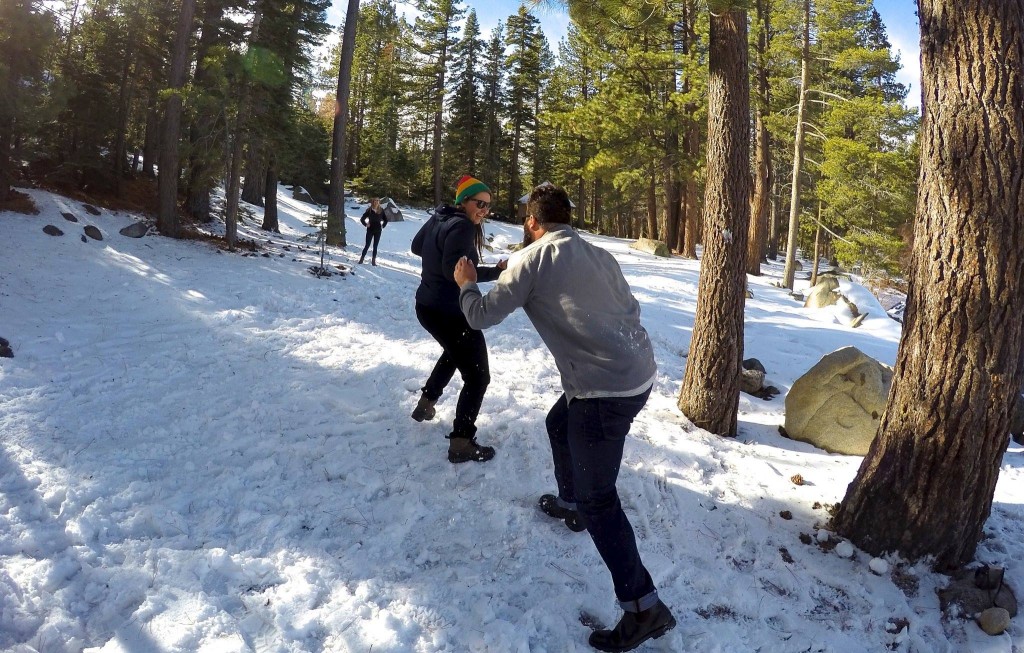 Eric helped me test the R1 by throwing snow at me.

At the end of the day making these small changes has made a difference, but the biggest difference definitely came from switching out our “Big Three.”

And I’ll tell you something else, reducing your base weight makes hiking easier on your body. Plus, my backpack packed with three days of food and three L of water weighs about the same as my Dad’s day pack these days. And that feels pretty darn good.

*Footnote: I know, I know, I own way too many Patagonia Jackets. I swear having the Outlet in town does more harm than good to my wallet at the end of the day.

I'm Kira. I have a neat life with a job, a boyfriend, and great roommates (my parents). In 2016 I'm leaving the job and the roommates and taking the boyfriend to ride into the sunset. Or just hike the Appalachian Trail. If you like what you see, check out some of my other stuff at redwoodroots.net!