1. Do NOT put permethrin on your underwear (Day 0: North Carolina to Georgia)

On the day I was to leave for Georgia with my mom and partner, I realized the only thing I had left to do was tick proof all my gear and clothes. Easy enough, right?… WRONG. Permethrin, or the use of any potentially hazardous substance, is something that should be looked into before use. Permethrin, when wet, is harmful to humans (and your pets) because it can damage your hormonal system. Even though I knew this, I was fairly lazy when it came around to researching before doing the treatment, so mistakes were certainly made. Although inevitable, research is the most valuable thing one can do in order to avoid mistakes.

As I was separating what I wanted to spray from what I didn’t want to spray, I looked up a few items to see if I should treat them, but not anything in real detail. After spraying most of my clothes and my book bag, which included my underwear and the inside of my socks, I decided to look up if you should spray the inside of your clothes. Considering you can soak your clothes in permethrin, spraying the inside seems like a more minimal problem, but it still seems like something one should not do. During the second research dive, I also realized underwear was a big no no for permethrin treatments.

So… after a good healthy crying for about ten minutes, and my mother immediately throwing my messed up clothes in the wash, I had to make some last minute switches to my clothing. It all worked out in the end, but it ended up being a bad start to an even worse day of travel. The underwear incident put us behind four hours and then we ended up being behind about seven hours because my mom’s tire also popped on the way to Georgia. Through the trials and tribulations, I did make it to trail though and that’s all that matters!!

2. Nothing really goes as planned… and that is okay! (Day 1: Amicalola Falls to Black Gap Shelter, 7.4 miles)

I woke up at 6:30 ready to start the journey I’ve been towards for what feels like much longer than a year and some change. I wanted to be at the arch around 8:30, but after everyone got ready, had breakfast and packed into the car to drive to Amicalola, I wasn’t there until about 11:30. It was no sweat off my back though because I was a bottle of mostly excitement/disbelief but probably a mixture of every other emotion as well. I was glad when they weighed my (full) pack in around 30 pounds as well because I was worried about pushing over that weight! So, after an emotional goodbye, I began the first steps on the AT as a thru-hiker.

I don’t know how common this is, but I counted the steps going up the falls. There were 588 and wow was that just a foreshadowing to the terrain in Georgia. The first day felt like a continuous uphill climb with varying degrees of incline. It was much harder than I had anticipated, so instead of going around 11.8 miles I planned, I stopped at the first shelter 7.4 miles in. It was also supposed to start raining that evening and I didn’t want my first night setting up camp to be in the rain. In hindsight, I’m extra glad I stopped because I would have pushed my body too hard had I stuck to my plans. I’m sure pushing myself along with the rain would have negatively impacted my first impressions of the trail. So, instead I had a very relaxing first night!

Neither my first day on trail, nor the day prior went as planned, but at the end both days it only mattered that I was still trying to do what I set out to do: Thru-hike the AT. The last lesson I learned from this day was to stay hydrated better because long story short, I had a headache all night. Not hydrating is a lesson I will only have to learn once…

Overall, I actually considered it to be the most chaotically boring day I’ve had. For me, the monotony of hiking several hours in a row was compounded by having extra weight on my back. I would take any boring day on trail over not being on trail though, so I look forward to the days that make getting through not so great days worth it! Experiencing the AT will certainly be worth the ups and downs… and it sure does have a lot of those. 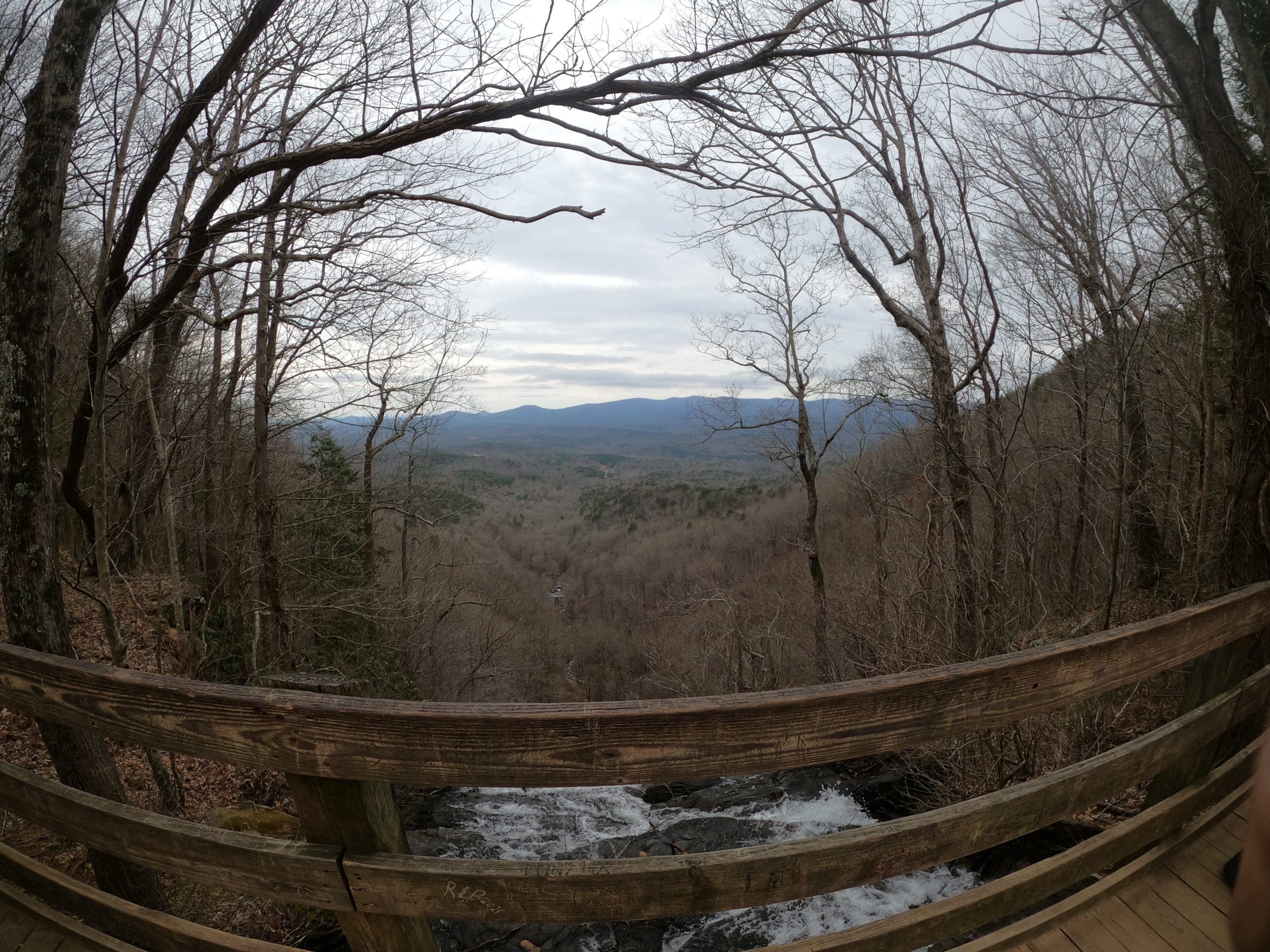 The (questionably, lol) worthy view for those who climb the 588 stairs up the falls

3. Not Only Can I Do This, But I Will Also Enjoy It (Day 2 Black Gap Shelter to Hawk Mountain Shelter, 9.6 miles)

When I woke up around 6:00, it was still raining very hard. Grateful to still be dry after the heavy storm, I decided to see if I could sleep another hour for the rain to pass. As I was getting up around 7:00, it had cleared up completely. I took a moment to be warm for a bit longer in my sleeping bag and with my moment of comfort over, broke camp for the first time! I was on trail by 9:00 and hiked the first 4.5 miles with a friend from the afternoon prior. It was nice to have a buddy for the beginning because it made the muddy hike pass by pretty quickly. It was already a much easier day than the one prior. During the 4.5 miles, we stopped to take pictures at the official southern terminus and then headed to the first shelter where we took a break for a snack and to rehydrate.

After stretching out a bit, I pressed on myself and having learned from yesterday, put on some music for a while. Listening to music helped me to keep a good flow going because as soon as I stopped listening to music I felt like I was dragging a bit. I made it to Hawk Mountain Shelter about 4.3 miles later and was very eager to make some lunch. This made me realize that I was also dragging up the mountain because I didn’t have enough fuel! Along with hydration, having enough food is also very important for maintaining your health during a thru-hike. After the initial shock of the first day, I realized on my second day that I genuinely enjoy being out here though. It is nice to start to find your own routine and also to be out on trail experiencing these beautiful mountains.

Overall, it is still blowing my mind that I’m finally on trail. The five to six months of walking have come and I am excited for the things I will learn throughout my entire journey! I often wonder what will fill my thoughts throughout this trek, but I hope (and anticipate) my ancestors and their knowledge come to the center of this. As I develop my backpacking skills, I look forward to being able to dive deeper into that more. Mostly, I am excited to be able to share this with others and I hope you all can find some value through my trek! Thank you for following along 🙂 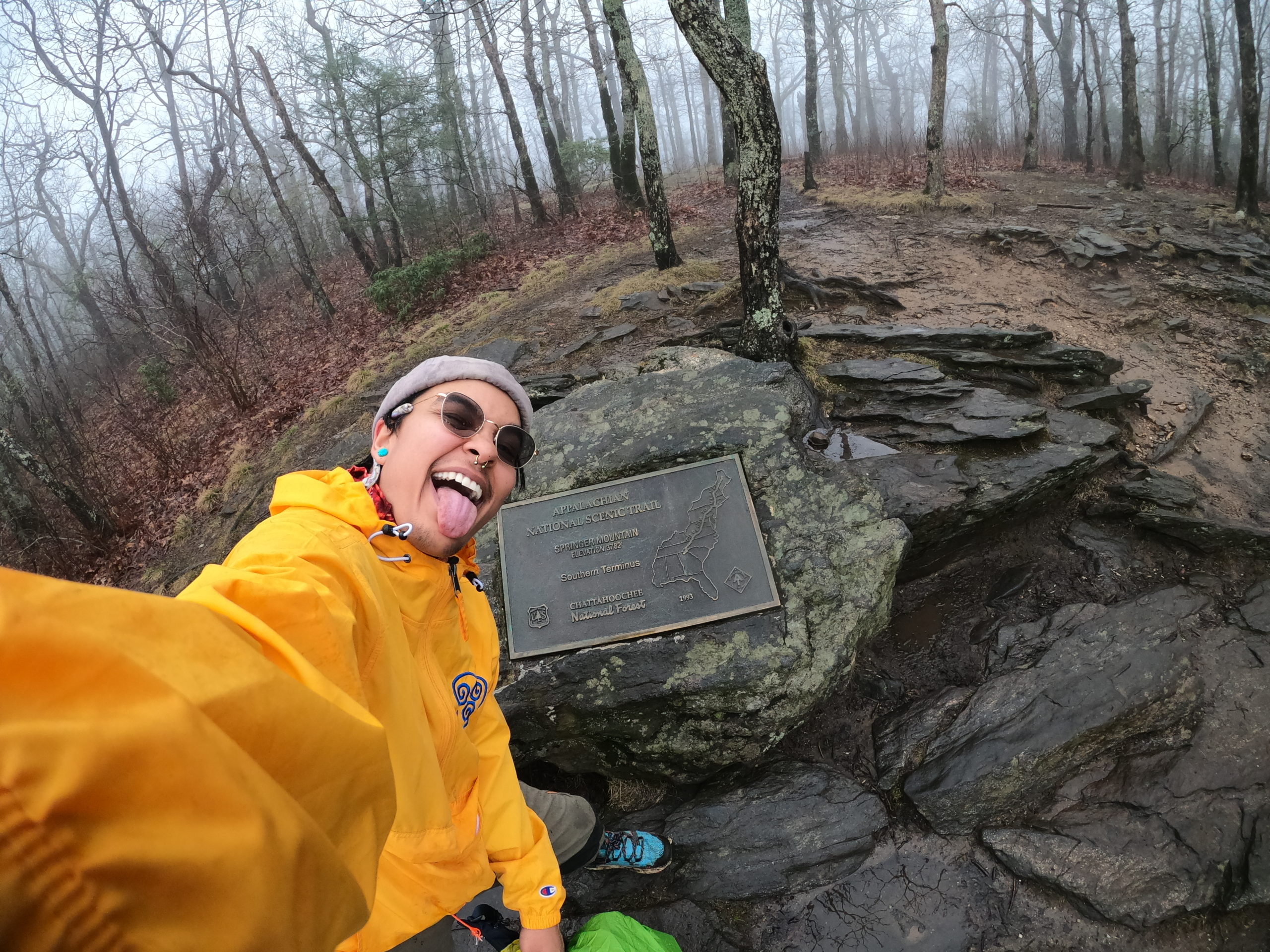 The southern terminus!! This is my first ~official~ picture on the AT as a thru-hiker