Let Me Tell You About The Bears And The Bees

Sometimes, I wish that when I started my thru-hike, I had known nothing about the trail. The hikers that have never stepped foot on the trail seemed to always have such interesting and funny stories. I was lacking on these stories because I knew what to expect in all of the southern states. My true journey finally begins around Roanoke, after my mishap under Tinker Cliffs. After my last post,  things started getting very interesting.

The day we left the Troutville Trail Days, I was hiking ahead of my group and came up on a rattlesnake laying across the trail. I immediately held my dog back, told Hooter (who is terrified of snakes) to stay behind, and told Sterling (a natural survivalist) to come ahead. Sterling immediately got excited because he had already mentioned wanting to eat rattlesnake,  and before he even saw it assumed I found one. He got his wish, and the rattlesnake met his ending. I will forever have nightmares about this process and will not go into detail… but, that day, I learned how to decapitate, skin, and degut a rattlesnake without even wanting to know. 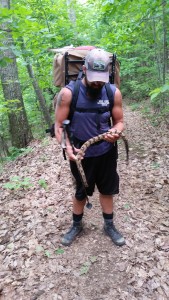 And then, this happened… 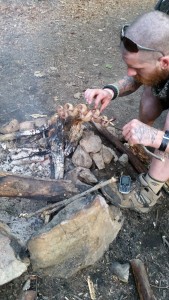 I refused to eat it and my dog wouldn’t even try it, but everyone else enjoyed it…

(Editor’s note: Sterling’s behavior was a clear violation of Leave No Trace, very sad, and something we condemn. This story will remain on the site as an example for others to learn on how to absolutely not behave.  As you will read in the comments below from Maggie, this is something that is happening on the Trail, and it should be addressed as opposed to ignored. For those who need a reminder on the principles of LNT, visit their website, and check out one of the many articles we’ve posted on the topic.)

Anywho, we had to leave Sterling behind because he got Giardia (he has been to the doctor and received the appropriate medication). He was miserable and couldn’t hike at all. Hooter and I got a ways ahead of him, hiked 20 miles,  and set up camp for the night. The next morning, we set out on the grueling 14 mile incline upto Apple Orchard Tower. I looked at my knee and noticed my first tiny deer tick munching on my knee cap.  I removed him and burned him to a crisp. This incident set forth a chain of events. After hiking about 6 miles,  we took a blue blazed trail to an overlook.  I keeled over in pain and realized I had just gotten stung by a bee in my armpit. I realized the stinger was stuck in me and made Hooter remove it. My arm went completely numb and I got extremely light headed. After resting for a bit, I felt good to go ahead…. then we got to Thunder Hill Shelter….

Hooter and I decided to wake up at 5 in the morning to move forward to Glasgow. We both took a Tylenol pm and we’re fast asleep in no time. Around 9:30, we woke up really confused. Did we just hear whistles? Did we just hear someone yell, “get away, bear”…. was it all a dream? I was half asleep and just handed Hooter my bear whistle. Then, I hear someone say, “was that a bear”?

It got real. We darted out of our tent and had a pow-wow with the other hikers. Apparently,  the bear was right at my tent and my dog growled. I was too asleep to notice. We decided to group together and move our tents all together. Then, I saw a glowing face near my tent again. The bear was stalking us. He wasn’t acting aggressive,  but curious. Our whistles and hollering never phased him. He just kept stalking and circling the entire camp area and shelter. I made the executive decision to night hike and get the hell out of there. Hooter and I grabbed our tent fully intact and ran it up to the shelter and started packing up with 2 other hikers. We packed up everything in about 5 minutes, which is a record. The bear was suddenly 10 feet away from us. I didn’t even put my dog’s pack on her and just strapped it to my back. We started booking out of there, and realized the bear was now stalking hikers camping up the hill from us. They were not interested in leaving, but we refused to stay. Later on down the trail, we find out they finally packed up and left.

We hiked fast. Three and a half miles in an hour. When we first started hiking, I called my husband to give him a heads up. I had thrown my guide in the bottom of my pack while packing in a hurry, so he found my 2014 guide at home and directed me where to go over the phone. We found the campsite we were looking for, in what felt like 20 minutes. I will never forget the face of the bear that was glowing when my head lamp shined on it. I don’t think I slept that night. Not due to being afraid, but due to the adrenaline rush the run in with a bear gave me.

The next day, everyone on the trail knew about our bear encounter and asked about it as we hiked toward the James River Footbridge. I have always known I would be too chicken to jump,  but I was very excited about this milestone, and it would be the first big one I’ve never seen on this journey. It’s officially a journey and finally feeling like the thru-hike I always imagined. Let the new stories begin! 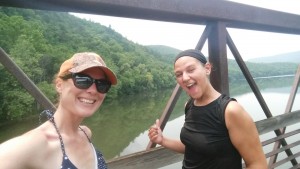