Life After Death (of a thru-hike)

“Ends are not bad things, they just mean that something else is about to begin. And there are many things that don’t really end, anyway, they just begin again in a new way. Ends are not bad and many ends aren’t really an ending; some things are never-ending.” – C. Joybell C.

Wow, it’s been a minute since I’ve posted an update here. When I left you guys, I was getting off the trail and hoping to return in August. It seems like a lifetime has passed since then, though it’s only been 4 months. Every single day I miss the trail and my trail family. I have dreams and daydreams about it. BUT this isn’t intended to be a sad post, because honestly life has been pretty grand since I got off the trail, and a new (better) plan has emerged in the last several months. I want to cover a few distinct points in this blog, namely:

Where exactly have I been?

When I left Daleville, I spent an entire day catching rides through generous folks I connected with on Facebook to get me back to Franklin, NC. Once there, I caught a ride with a friend up to Highlands, NC where I proceeded to look for restaurant jobs. Conveniently, the restaurant I worked at last year (where I saved most of the money for my hike to begin with) was re-opening under new ownership and hiring, so I was able to land that gig pretty easily and start working almost immediately. Having been out of touch with society for quite some time, I had not bothered to check my emails in several weeks. I made a point to sit down and go through them one evening and found an email from a Wilderness Therapy company I had applied for MONTHS before asking if I’d be interested in attending a staff training… three days from when I returned from my hike. What the heck. Why not? (Oh, yeah, there’s that whole fractured foot thing). SO I responded to the email and explained my situation (carless, mostly homeless, injured, but interested!) and was able to work it out. I borrowed a friends car to run around and get all of my credentials taken care of, hitched a ride down to Clayton, Georgia the night before the training (still carrying my AT pack… that’s all I owned!), and the next day headed out on a 7 day training excursion with 7 other super cool folks.

I got the Field Instructor job with Second Nature Blue Ridge after completing training, and have been working for them ever since, and picking up shifts at the restaurant during my off shifts. This job consists of 8 day shifts in the wilderness with groups of teenagers who are in the therapy program, followed by 6 days off. Sounds like a cool gig for someone just off the trail, right? Well, it absolutely is. 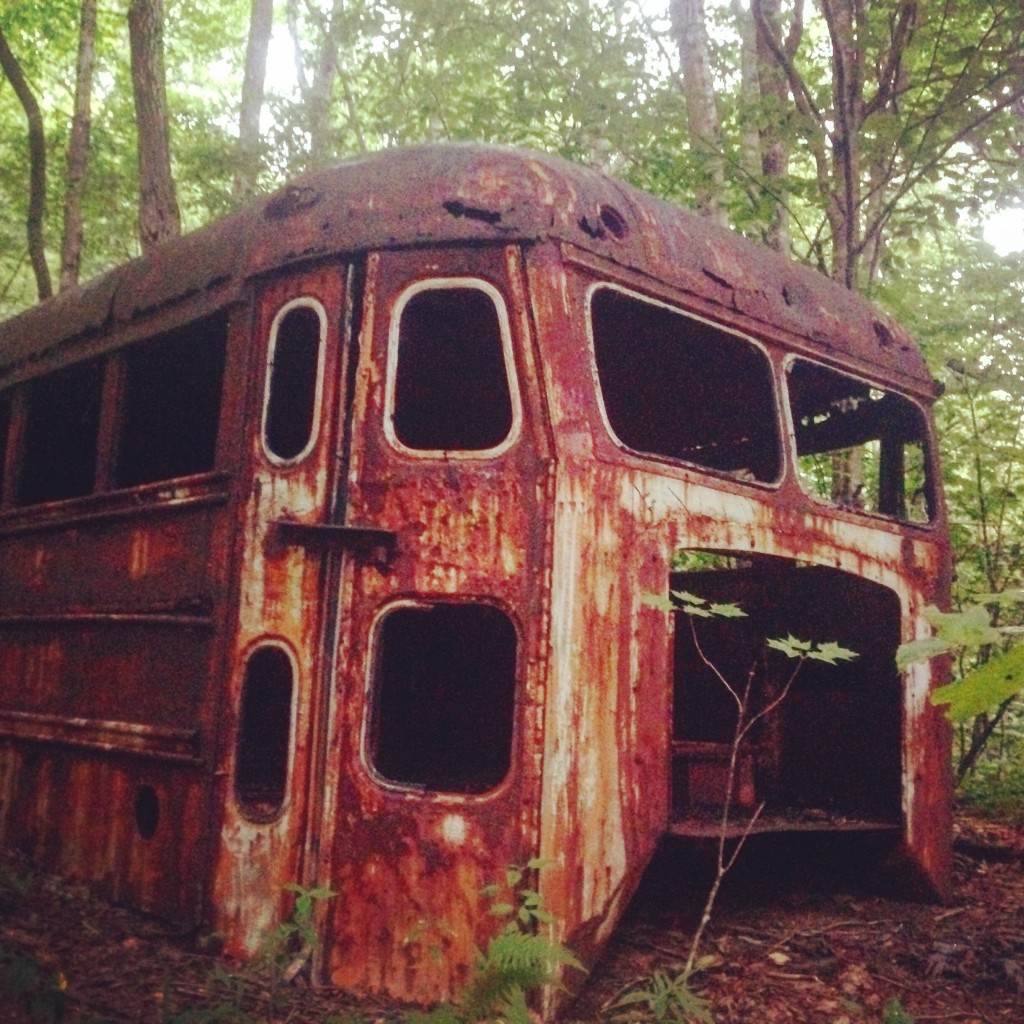 This old bus was at a campsite we used on my very first shift as a field instructor for SN. We were camped very near Deep Gap, off the AT in North Carolina.

Unfortunately, as cool as wilderness therapy is, and as awesome of a company as Second Nature is, this simply isn’t the career for me. Don’t get me wrong, getting paid to go camping is basically awesome; however, with the kind of lifestyle that I live (spontaneity, strong relationships outside of work, and owning two dogs), the schedule quickly became really difficult for me to maintain and became the source of a lot of stress and anxiety (I couldn’t be there for my friends and family when they needed me, I had to board my dogs for 8 days at a time while I was in the woods, etc.). So, a month or so ago I began to search for other opportunities. Being as I have a masters degree geared toward agricultural education, I began looking for jobs and literally the first website I found had a job opening thirty minutes from Franklin (where I’m living) for an ag teacher. Must be fate, so I applied, and as long as all goes well between now and then I will be starting that job in January! So, my original plans to get back on the trail in August did not happen due to other opportunities coming up, but that’s OK.

Needless to say, I was pretty bummed when I had to end my thru-hike attempt and come home. However, I did find some ways to cope with post-trail depression that really worked for me. Here are 5 ways I combatted the blues and kept moving in a positive direction:

Reconnect with people at home that you love and care about, and try to learn them on a deeper level than you knew them before. You know those instant, incredibly strong bonds you build with people on the trail? It’s possible to develop those with people at home IF you mimic conditions on the trail: talk to them without distractions, ask them personal questions that you should but don’t know the answers to. I had lots of friends before leaving, and now that I’m back, I feel closer to them than ever. I’ve also developed some life-long friendships from the trail and I work hard to stay in touch with those people. 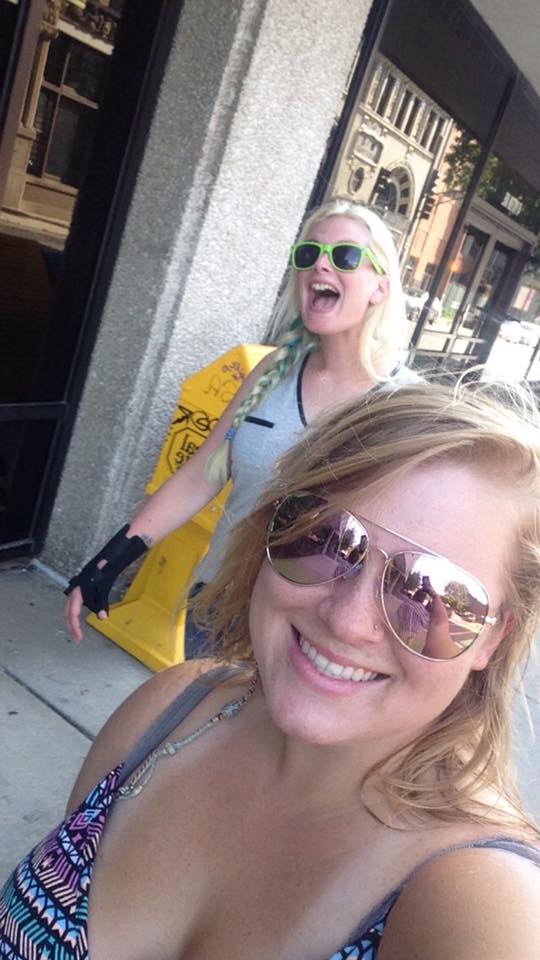 In August, I got to reunite with my hiking partner Goldilocks (Jessica Georgia) on a trip to Asheville!

Get busy. DO NOT sit at home and wallow in your misery. One of the most important things I did was start my job hunt the day I got home. On the trail, every day you have a goal and every day you have purpose. It’s again possible to mimic that in the “real world” by finding something to do and doing it well, setting goals for yourself and waking up with a purpose and a mission each day. No matter how small or unimportant it may seem, having a job to do and aspiring to do it well will keep you going. 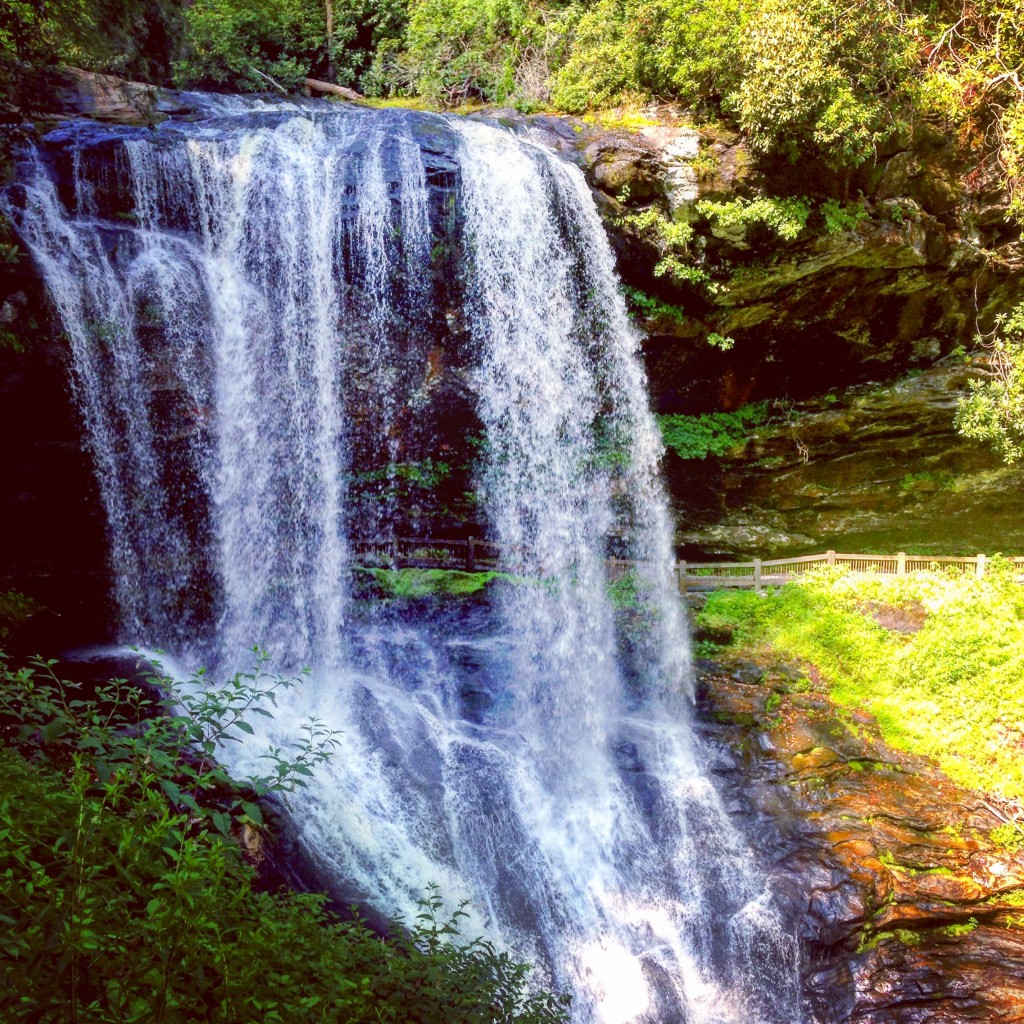 Dry Falls, an unbeliavable waterfall on the road between Franklin and Highlands, NC. I pass by it every day on my way to and from work.

Immerse yourself into the world around you. I’ve spent a lot of time in the Franklin and Highlands area, but there is still so much here that I have not done, so many things I haven’t seen and places I haven’t explored. I made it a point to try to, at least once or twice a week, go on a mini adventure and see or explore something I had not bothered to care about in the past. I found that there is tons of history in this area, and dozens of little-known, absolutely beautiful spots hiding in these mountains. I’m sure wherever you live is the same. One thing I picked up was geocaching and I try to hunt out at least a couple a week. 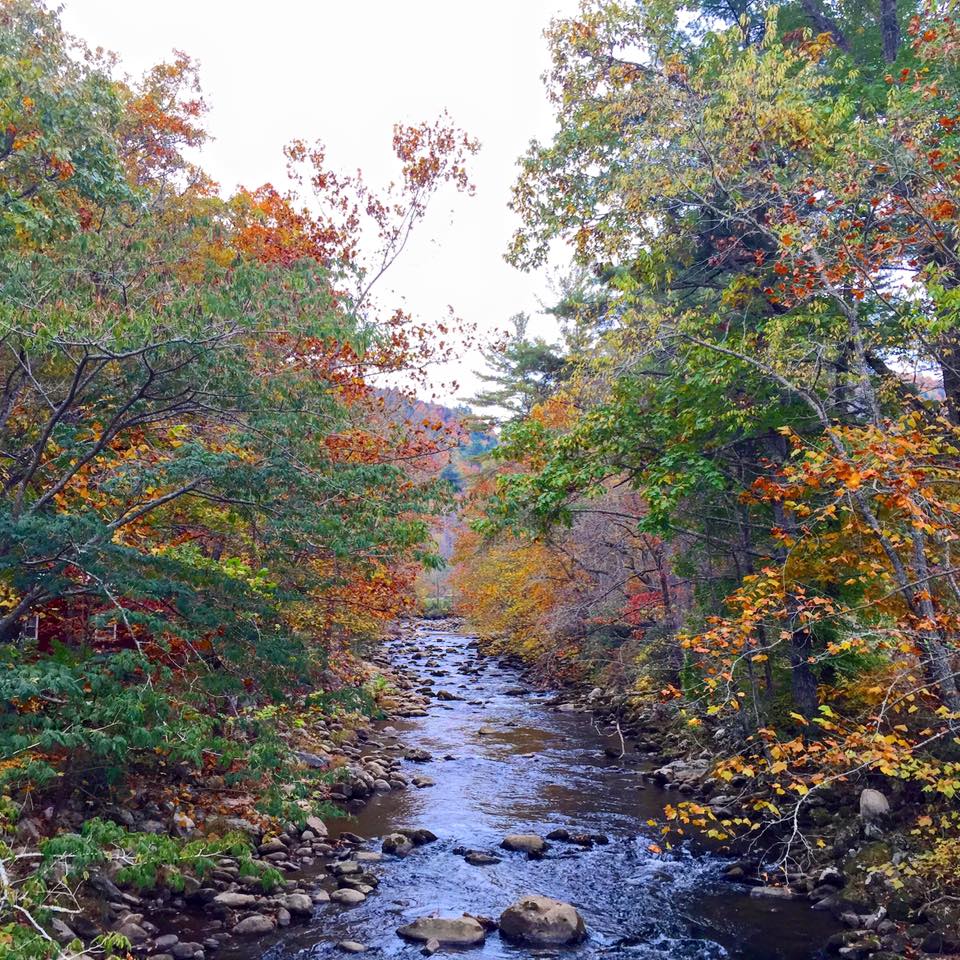 I’ve taken up Geocaching and have fun exploring the area around Franklin and Highlands. There are several along the Cullasaja river, one of several rivers in the area. I took this photo from a bridge that also served as a cache location.

Stay active. You’ve been hiking like crazy up and over mountains for weeks or months on end. Your metabolism is begging you to keep moving, so give it what it wants. Unfortunately due to my injury I was not able to stay as active as I would have liked, but I’m now fully healed and starting to do more. Trail running, hiking if you have trails, going out and walking around in the woods, jogging around the neighborhood, anything to keep your body moving will amp up endorphins and make you feel good. I missed a few 2-30 mile sections of the AT when I was on trail earlier this year, and one thing I’m trying to do in my free time is go back and make those pieces up. I’m not  purist by any stretch of the imagination, but these short trips fill my heart with joy and keep me looking forward to more. I also have plans to start experimenting with climbing and kayaking, other outdoor sports that will keep me physically active and introduce me to other cool communities.

Plan your next adventure. One of the things that has kept me going is knowing that, although my thru-hike attempt ended at mile 700, that means there are still over 1400 miles of the AT left for me to explore. Then there are dozens of long-distance trails all over the country and the world calling my name. Researching and planning for these future adventures keeps my heart racing and my head spinning in anticipation.

BONUS: Start saving money now. There’s nothing quite like watching your bank account grow and knowing that pretty soon, you will have enough to take another trip, have another adventure of a lifetime. The biggest burden and stress on my thru-hike was finances, and I don’t want my next adventure to be burdened by limited funds, so I started putting money into a savings account as soon as I possibly could, even if it meant going without some things (I didn’t buy a new outfit until about a month ago… I spent three months living off donated clothes from friends and a box of old clothing my mom mailed to me from home).

For now, I’m going to settle in Franklin, NC, which thankfully happens to be a designated Appalachian Trail Community and has a strong (and growing) community of supporters for the trail and hikers. Over the next few months, I’ll begin my teaching job which will allow me most weekends and holidays off to… you guessed it… HIKE!. I’ve got about 75 miles of the trail between Springer and Dragon’s Tooth to make up that I missed during my thru-hike attempt, and I’ll be working on knocking those out between now the end of the spring school semester. I hope to be able to go out around June 1 for at least a month (300 miles) and possibly longer (because summers off!!) starting at Dragons Tooth and heading north. I hope to be able to finish section hiking the AT this way over the next few years. After the AT is completed, I want to spend one summer walking the Camino, and from there my options really are endless when it comes to long distance hiking.

“Would you tell me, please, which way I ought to go from here?”
“That depends a good deal on where you want to get to.”
“I don’t much care where –”
“Then it doesn’t matter which way you go.”
― Lewis Carroll, Alice in Wonderland