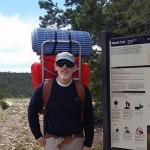 Life on the AT for Tom “Redbeard” Abel

For me it has been difficult to blog from the trail. First of all, I don’t usually have the availability of a computer and it is difficult to type everything on my phone. So, I apologize for not doing this more often. Also, my phone does not hold a charge very long, even in airplane mode, so I keep it off most of the time. Now I am staying at a very nice hostel, Green Mountain House, in Manchester Center, VT. They provide a computer and WiFi, laundry is included with the stay, and Ben & Jerry’s Ice Cream pints are only $2.00. I just finished a pint of Cherry Garcia (only 1000 calories).

When we first started daylight came about 4 a.m. Now the days are shorter and it does not start getting light until about 5. That is when we get up, when the birds start chirping. We have a breakfast, pack up, and hit the trail, usually by 6:00 or 6:30.  I like to stop after about four hours and eat. Lately I’ve been having peanut M&Ms with macadamia nuts and a Cliff Bar. I’ll stop again around 2 p.m. and have something like mini-Ritz Crackers with peanut butter filling, and cheese and salami snacks. In the evening, I have been eating freeze-dried meals, such at those by Mountain House. I add a package of Ramen soup to the package to add additional calories and flavor. One of my favorites is Beef Strogonoff with beef flavored ramen soup. I am usually in the sleeping bag by about 8 p.m.

There are a lot of ups and downs….physical and mental. The most challenging of the mountains are behind us.  The mountains in Maine and New Hampshire have very long, arduous climbs up, often scrambling over boulders and up cliff faces. Sometimes there is a rope or some kind of aid, but usually not. Going down the mountains is often perilous because of long, slippery slopes. I have come to some of these locations and just stared for endless minutes while trying to determine the best way to get down without getting injured. Uphill has been very difficult for me. Climbing up what seems to be an endless incline has been very difficult. When I first started, I called it my twelve-step plan. I would go up 12 steps, and rest, catch my breath and let my heart rate slow down. After several weeks, I was counting to 25, then, over time I worked up to 50.  I worked up to over 100 steps. Now that I am in Vermont, I still count every once in a while on the steepest slopes, but usually don’t get over more than 300 – 400 before reaching the top.

As far as the mental ups and downs go, the biggest drain on my psyche is falling. There are many hazards for slips, trips, and falls. For example, day before yesterday, I was planning to do a 20 mile day for the first time. I fell four times. The first was on a slippery root and I bruised my knee. The second was a stream crossing; I slipped on a rock and filled my boots with water (then had to take time to empty them and wring out my socks). The third slip was down a wet rock (it had rained the previous day and most of the night and there was a lot of mud and slippery conditions). I twisted my right shoulder on that one. The fourth slip was when I was talking with my wife on the phone. I was standing at a scenic overlook where I got a surprisingly good signal. We were ending our conversation when i made one misstep on a slippery inclined rock, and fell jamming and bruising my left elbow. That was a bad day for me. I made it to the next shelter at 2 p.m. having only gone 10 miles, and called it a day. I ate, then ate again, then got in my bag at about 6 p.m. When I woke up the yesterday, I told myself that it would be a better day. I hiked from Minerva Henchey Shelter (Mile 509.4) to Peru Peak Shelter (Mile 529), a total of 19.6 miles in a little over 11hours – my longest distance, so far (not longest day). I did not fall once, and only had one slip and one trip. Today I did another 10 miles to Manchester Center, VT (Mile 539.1) without incident.

Not once has a mental down made me want to quit the trail.

I was carrying my Fit Bit Zip with me the first part of the trek, and discussed my step count in my last post. I lost it in Rangely, ME. Actually, I think I had it the pocket of a pair of  pants that I threw in the clothes washer. Anyway, it disappeared. I decided to not replace it as many of the steps were baby steps going up mountains and really did not relate to distance. I think I am over the step tracking thing now. We’ll see when I get home.

I broke a trekking pole shortly before getting to Rangely. I shortened it, and made it work for the short term, but called REI to send me a new set. They made it happen. The new poles were waiting for me two days later when I got to Rangely. I gave the good used pole to another hiker (Gully) who had been hiking with one pole because he had broken one.

My Keen boots with over 400 miles on them were falling apart. When in Hanover, I took the bus to West Lebanon, VT and went to the Eastern Mountain Sports store and got a new pair of Oboz. The jury is still out on the Oboz. I have to ties them just right to keep them from hurting the front of my ankle. Maybe it is just the breaking in process. The boots do seem to have a better sole than the Keens, but I still have to be careful where I put my feet. I also got a new pair of pants because the ones I had been wearing were falling apart. I had already sewed up one pocket with dental floss (dental floss is very strong).

Today, I got a new sleeping pad… inflatable.  The Thermarest pad that I have been using is just not enough with the injuries. They don’t bother me much while I am walking and limbered up, but when I am trying to sleep at night and roll onto a bruised body part, there just is not enough cushioning.

What is a Thru Hiker?

I was hiking along one day when I encountered another hiker with what looked like a full pack. I asked him if he was thru hiking the AT. He said, “Yes, I am through hiking, the bugs are driving me crazy, I am headed back to my car.”

Different people have different definitions of what a thru hiker is. Some say you have to pass every white blaze along the AT to be a “true” thru hiker. There are terms like blue blazing, which means following a trail that is an off shoot or loop trail off of the AT, and yellow blazing, which means hitch hiking and skipping a portion of the trail. I yellow blazed once getting to Monson, ME after the 100-Mile-Wilderness and shorted the trail 0.3 miles. I  have also blue blazed a few times but this amounts to well below a mile of white blazed trail. So, as far as I am concerned, the 5.2 mile hike up Katahdin still gives me a positive credit.

At my age, I am going to make my own rules and still call myself a thru hiker.

Sorry no photos this time. Going to dinner and have to run.

My name is Tom, but I am going by the trail name Red Beard. I am 66 years old, and as you can tell from my picture, my beard is no longer red. Red Beard reflects how I see myself when I am not looking in the mirror. I refuse to grow old gracefully. I am a geologist, now retired. I have always enjoyed working in the field and disdained working in the office. I have wanted to thru-hike the AT since 1975 and am finally going in 2017. In the mean time, I will be training physically and mentally (thank you Appalachian Trials) and getting my gear the way I like it. I will occasionally write about my progress. Happy Hiking!