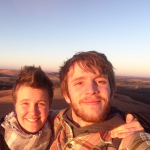 Preparing for a thru-hike means testing gear. Recently I went out into Western Kansas to try out both my Nemo Hornet 1P. Western Kansas is not always front of mind when one thinks of places to test tents and sleep systems, but 2020 was a year to hike local and explore the excellent but often overlooked offerings nearby.

“It looks so clean,” is always my reaction to the landscape west of Junction City, Kansas. Tumbleweeds jog across the scrub like little animals hellbent on dying in traffic. The mixed-grass prairie deepens quickly after Salina and by Oakley, the dripping East is a fading memory. Everything beyond that is an introduction to a defining characteristic of the history and geography of the American West: space. 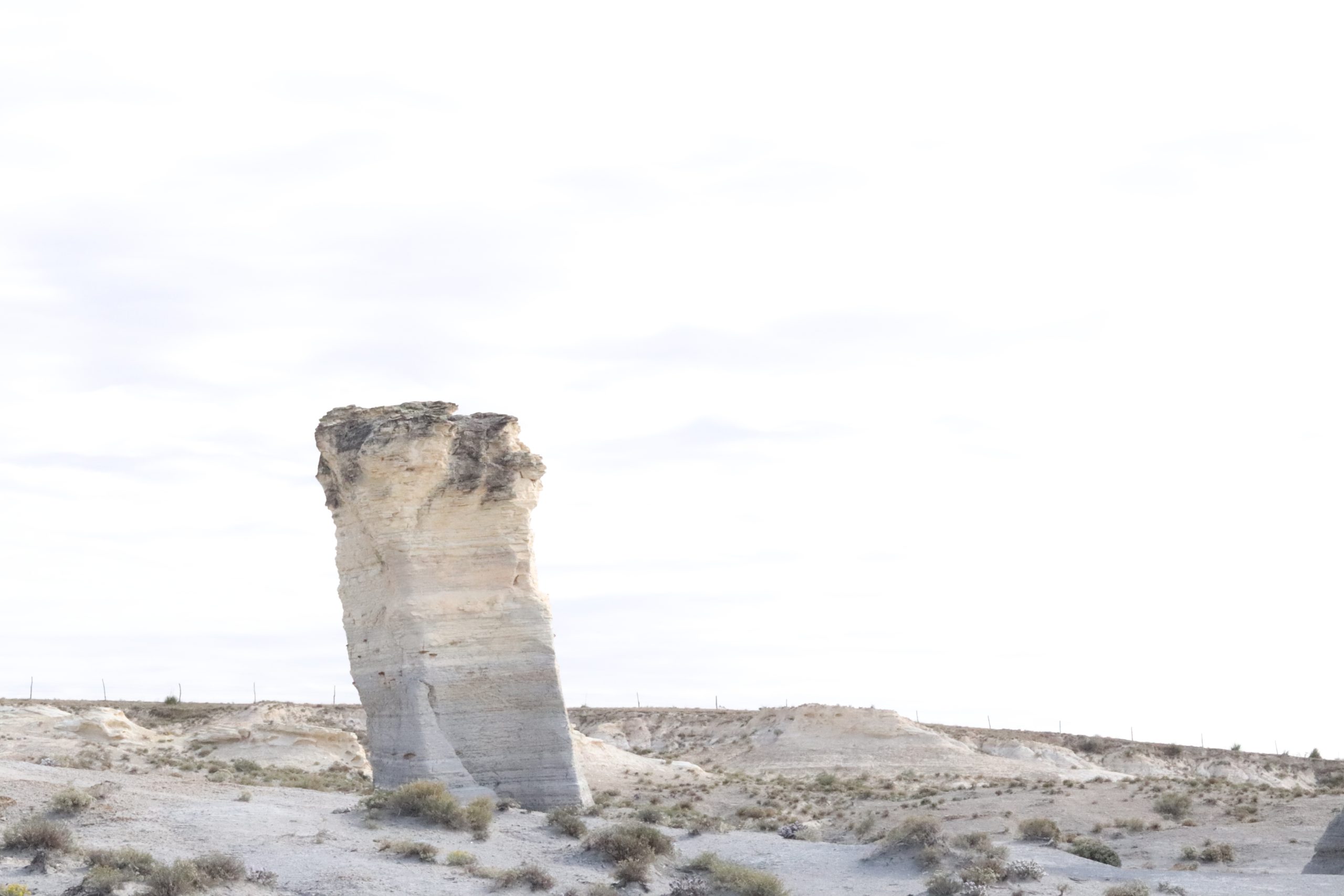 The Kansas Department of Parks, Wildlife, and Tourism boasts 28 parks around the Sunflower State. Plenty of options for hikers, campers, hunters, fishers, bird watchers, equestrians, and whoever else wants to steep themselves beneath blue skies, forests, and prairies. Little Jerusalem Badlands State Park is the newest addition to a state park system that often receives little attention from outside visitors.

Little Jerusalem is managed in partnership with The Nature Conservancy and the KDPWT. It is managed for biological diversity, so only portions are open to the public, but those portions as well as the other natural areas in the region are well worth the visit.

The stunning bluffs are part of the Niobrara chalk formations, which have drawn visitors off the interstate and hip-deep into the prairie for years, places like Castle Rock, or Monument Rocks. The limestone towers appear suddenly from a landscape that is surprisingly good at keeping secrets. Stunning mazes and giant honeycombs are leftovers from an ocean that straddled the continent during the Cretaceous Period.

Our little Toyota brought us to the Smoky Hills just before sunset, though the ceiling was low and stormclouds blurred the line between prairie and sky. Turning off I-70, we set off across the rangeland.

Pumpjacks bobbed up and down, and sturdy black oil tanks broke up the monotonous horizon, but the landscape was otherwise featureless, pale grass to the edge of sight in all directions. There was little or no signage to indicate that the GPS was taking us anywhere near a state park at all, much less anything like the badlands we came across in South Dakota. Just when we fully convinced ourselves that we’d missed a turn somewhere, we pulled up on a draw and out spilled before us the: Promised Land.

Then the rain moved in. 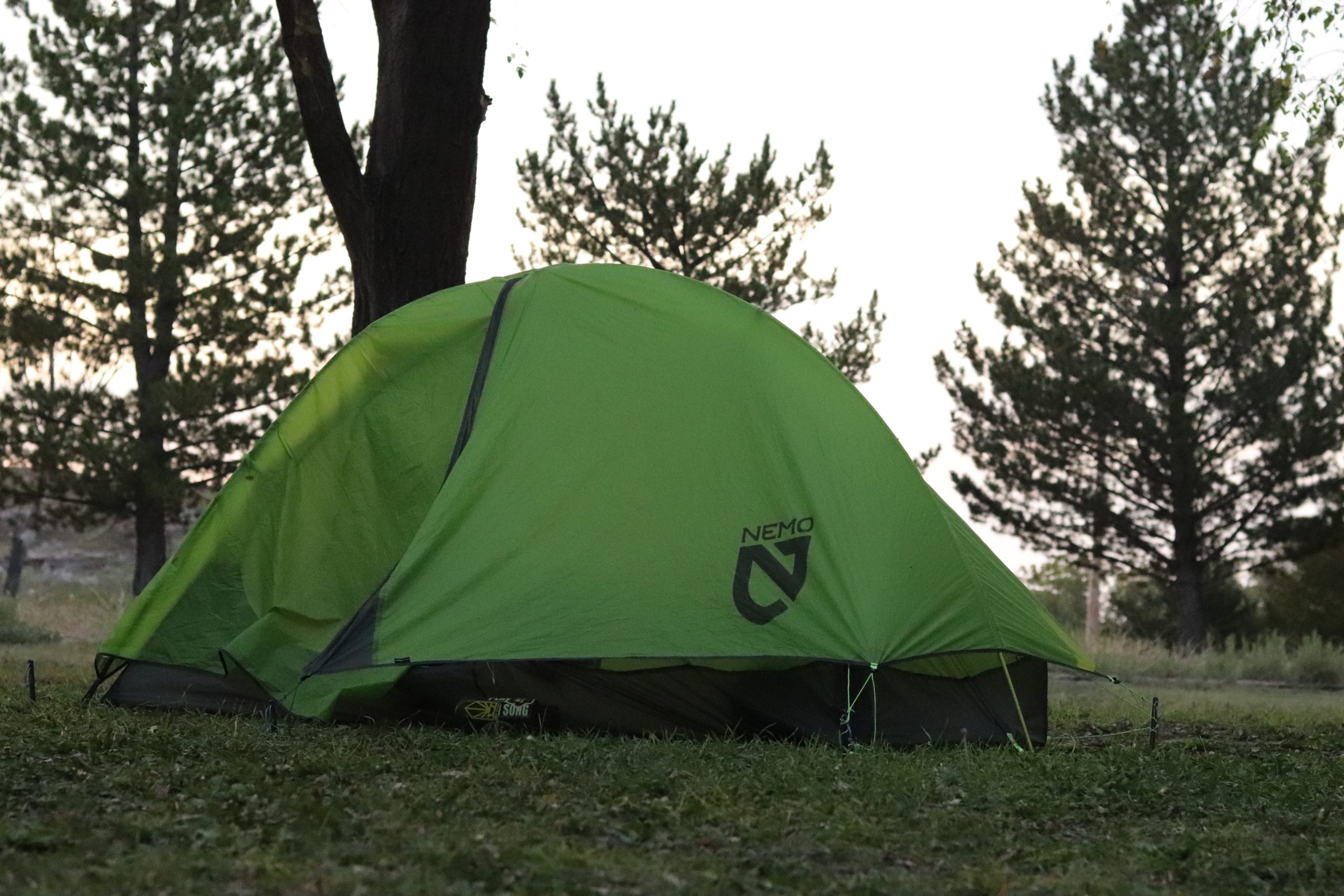 I’ve relied on Nemo brand tents and sleep systems for 6 years now, and this iteration of their 3 seasons lightweight backpacking tent has only validated my commitment to this company.

The Hornet is marketed as a free-standing, 1 person tent. With a floor space of 22.3 feet and a peak height of 39 inches, it is strictly that. I’m not a large person, 5’ 9” with a slender build, and this tent fits me with a fair amount of clearance on all sides. If I was a little taller, or broader, it might be a different story.

I can lay down with plenty of space between the walls and my head and feet. As a big fan of dry feet, I appreciate a toe box that stays dry no matter how much I slip and slide in my sleep. If you travel with a dog, cat, partner, or a ton of extra gear, you might want to find something with a little more space.

The tent also features several sets of volumizing guyouts and struts. First are those at each corner. Once staked out, these pull out on the bathtub floor and increases the space around your feet and head. Another pair of guyouts are found on the mesh halfway up each side. These hook the inner tent to the rainfly, which opens up the inside to create a little more breathing room.

The vestibule covers about 7 ½ square feet depending on how you tension the rainfly, which is enough for my 48-liter Osprey Kestrel fully loaded. Importantly, it’s also plenty of room to cook under on those rainier days. 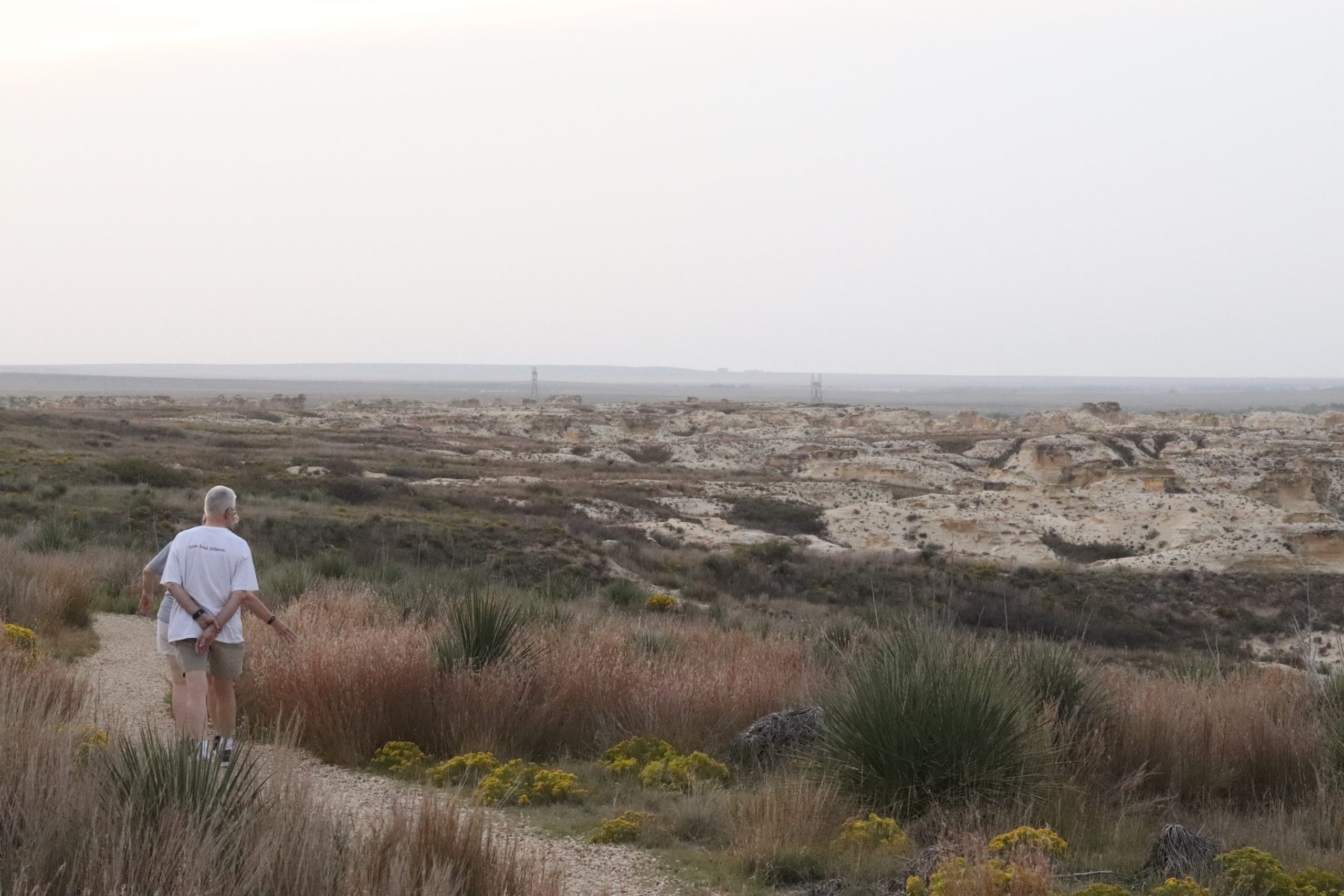 But is it light?

Free-standing tents get a lot of guff from the ultra-lite crowd. The Nemo Hornet 1P weighs in at roughly 2 lbs 6 oz. with the footprint (which is highly recommended). To me, this means it is plenty light for anyone who is looking to keep their base weight down, and still have money left over for pizza and ice cream when they get to town. It’s not the lightest by any means, but it is sturdy, durable, and can be pitched almost anywhere.

The patented Featherlite poles snap together quickly around a single hub, which means that even in the dark, getting this thing framed and anchored is super fast. The rainfly takes a little finessing, as with most of the ultralight tents on the market, but before long you’ll find your sweet spot.

That night the wind whipped and howled. Rain pounded the fly, but the stakes held firmly in that stony prairie soil. Camping in the teeth of an early winter storm is the ideal condition to test a brand new tent in my opinion.

When the sun burned away the clouds the next morning, I was pleased to find hardly any moisture inside at all, besides a little condensation beneath my sleeping pad. The assumption here is that rainwater seeped between the footprint and the tent floor; probably user error.

As is common in Western Kansas, the dry air wicked the water from the ground and gear before breakfast was done. Reasonably well-rested, we took the trails, and as expected, the hiking was stunning. 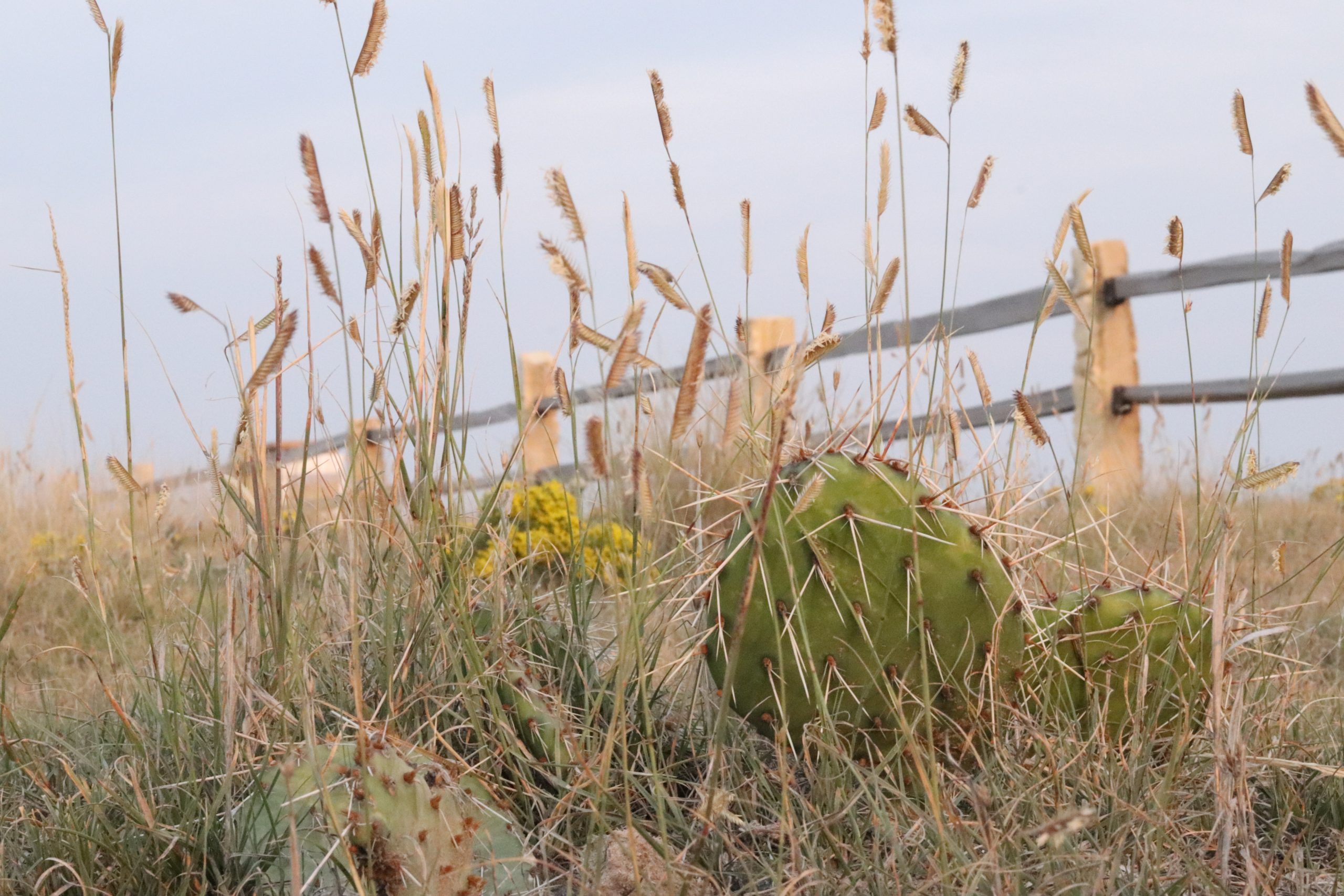 What to Expect at the Little Jerusalem Badlands

If you find yourself on Interstate 70 heading West towards Colorado, this is a great place to find respite after a long day of driving. You cannot camp at the Little Jerusalem Badlands. Instead, visitors are directed down the road to Scott State Park, which is a destination in its own right.

Little Jerusalem has flush toilets in the parking lot, which you’ll be grateful for after the drive. The fee for entry is 5 dollars and according to a handwritten sign at the entrance, it is “rigorously enforced.” Which is fair. Managing such a site for the general public takes a lot of work and anyone interested in public lands ought to be willing to chip in to ensure they’re around for years to come.

The park gate opens at 7 and closes at sundown. Visitors can trek along about a mile and a half of well maintained and level-grade trail. It’s an awesome destination for folks with young kids, and people with limited mobility, though wheelchairs may have some difficulty managing a few of the turns on the “Life on the Rocks Trail.” The ¼ mile Overlook trail would be the better bet in that instance.

The American grasslands are one of the largest contiguous biomes in the world, second only to the Arctic taiga. American bison, mule deer, pronghorn antelope, badgers, and swift fox are a few of the major mammals that can be found around Little Jerusalem. For the bird watchers, keep an eye out for ferruginous hawk, American kestrel, northern harriers, Swainson’s hawk, and the ever-present red-tailed hawk, along with a suite of meadowlarks and sparrows aplenty. The prairie is filled with music.

It Takes a Soul to Love the Prairie

Whether testing gear or simply hiking local, the Little Jerusalem Badlands is one of many reasons to re-examine flyover country. This was a first and admittedly limited testing of the Nemo Hornet 1P, but as mentioned, this is a brand with which I’m familiar. My partner and I have spent upwards of 400 nights in the Hornet 2P, and while the materials are different, the quality has left us dry and comfortable every single time.

Grasslands and swamps aren’t generally thought of as National Park material. As a New Yorker transplanted to the middle of the country 5 years ago, I am still gobsmacked by the amount of space out here, and the unique opportunities for engaging the outdoors recreationally. The grasslands are defined by movement and change.  I often think of what Willa Cather said, “Anyone can love the mountains, but it takes a soul to love the prairie.” 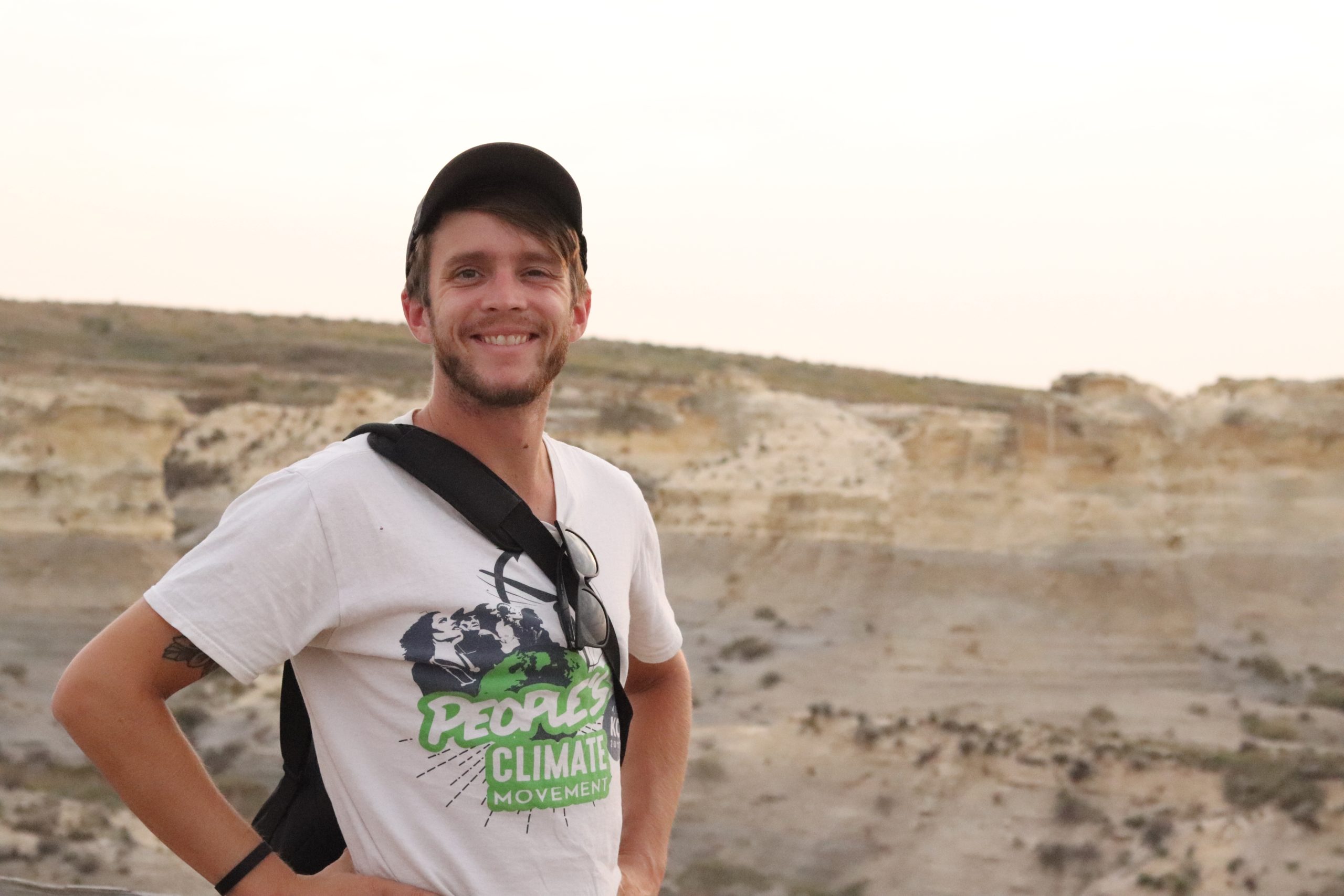 Writer, hiker, cyclist, and cat dad kicking it in Kansas City with plans to thru-hike the Appalachian Trail.