In the mid 1990s, I canoed a section of the St. Croix National Scenic Riverway in western Wisconsin. The mother-daughter trip was memorable for three reasons:

I’m no stranger to these tiny arachnids.

Western Wisconsin is one of the hotbeds of tick-borne illnesses, especially Lyme disease—and apparently—ehrlichiosis. I was reminded of this after posting a photo of a very small tick my husband discovered after a hike taken in the national forest by our cabin. It’s March and we are in Northeast Wisconsin and there is still snow on the ground.

I clearly recall finding my first tick when I was around five years old. While our parents visited on the patio one fine summer afternoon, a bunch of us kids were busy stomping labyrinths and building forts in the nearby unmowed field. The next day at dinner I felt this weird, shiny-feeling bump on top of my head. There are many opinions on the best way to remove an attached tick, and in the mid-sixties, we did things like coat it with Vaseline, touch it with the tip of a hot (but blown out match), or just pull it out. Since it was entwined in my hair, I believe Dad just pulled it out.

Over the years I’ve removed ticks from various body parts (although never from the nether regions—an area many fear ticks will be found embedded, but few actually are—at least in my experience). I think the most I’ve brushed off at any one time hovers around 30. I know we once pulled as many off of our dog.

But the St. Croix tick was something new. A few weeks after that trip, our family was canoe camping in the Sylvania Wilderness Area, a chain of mostly non-motorized lakes in Michigan’s Upper Peninsula. We had several portages and I remember feeling more tired than usual. I just wanted to nap. Back at work on Monday, I was feeling decidedly flu-ish. The following weekend, I was slated to attend a weaving convention (yes there are actual conventions for that) in Cleveland and had been intending to leave on Thursday. Hoping that antibiotics might clear out whatever I had by the weekend, I went to see my doctor on Tuesday morning expecting to receive the miraculous prescription. Instead, the lab tests she ordered revealed extremely low white blood cell counts and elevated liver enzyme levels. I was immediately hospitalized. I missed the convention while spending the next four days evaluated and treated by an infectious specialist. I know I was pretty sick because for one thing, who gets to stay that long in the hospital these days? I also had some massive headaches coupled with complete lose of appetite. Not even the smallest piece of lasagna appealed to me—and I do love me some lasagna. At least I could stomach the codeine.

Even though I apparently was extremely ill, I’m still not afraid of being sidelined by another tick. Almost everything we do can be associated with a risk factor—from taking baths to driving cars, from food choices to work environments.

But I am taking precautions. The entire Northeast is as hot—or hotter—as western Wisconsin and the birthplace of Lyme disease, near Lyme, Connecticut, is ground zero. An estimated 300,000 infections occur each year. New England, the mid-Atlantic states, and the upper Midwest are at greatest risk. And as you can see by the large red warning areas shown in the map above, a goodly amount of the Appalachian Trail falls within the highest percentage of prevalence created by our disease-transmitting nemeses.

Fun Fact: The best maps showing high-risk areas, and the one used in this post, are canine disease prevalence maps. This is because a nationwide reporting program exists for dogs that are routinely seen and screened by veterinarians. And humans tend to inhabit the same geographic regions as their canine companions.

Over the years, the area of risk has continued to expand. The only way to avoid the disease altogether is to never leave your house. Or hang out with a dog. And for most of us, either or neither of these options are plausible.

The larger concern to me about Lyme disease—and other tick-borne illnesses—is not necessarily the immediate threat and diagnosis, but rather going untreated or undertreated. It’s the chronic issues that are the more worrisome time bombs. There are many debilitating life-long consequences associated with tick diseases that I would prefer to avoid.

Knowing the symptoms identified by the CDC of Lyme, and the all-to familiar signs of at least one other tick-borne disease, is the first line of defense. And yes, common symptoms may or may not be obvious or even present in some people.

To help reduce the likelihood of contracting diseases associated with ticks, I’ll be following the usual precautions including spraying my hiking clothes with Permethrin and conducting daily tick checks. If a tick is attached to the skin for less than 24 hours, the chance of getting Lyme disease is small; however, other diseases can still be transmitted. I’m also bringing along doxycycline if I suspect Lyme is taking hold. Early treatment is key to foiling the long-term consequences of the disease.

Like an opinionated relative who gets under your skin from time to time, ticks are just one more little nuisance to be understood, endured and detached. 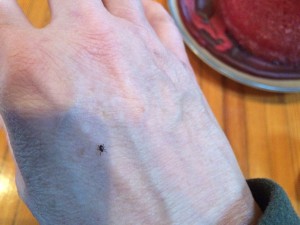 Much too early in the year to have discovered this little bastard.

Full disclosure: I am not a medical professional and this information is gleaned from my personal experience, research and a handy prescription I secured from my physician prior to heading out on the trail. This post is intended to provide only a topline perspective—and it is my perspective only. Check out these sites for more complete information.