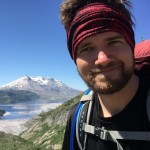 In my last post, I’d hiked through 4 states and into Great Barrington, MA. Since then, I climbed Mount Greylock, finished Massachusetts, walked over 100 miles on the Long Trail, and completed Vermont, my 12th state (and one of my favorite).

Porcupines and Geese: Wrapping up Massachusetts

The end of Massachusetts did not disappoint. My first night after Great Barrington, I stayed at the Tom Leonard shelter, a shelter infested by porcupines. Seriously… I slept inside the shelter since it was supposed to rain all night. In the wee hours of the morning, I awoke to a disturbing “crunch, crunch” sound. Sure enough, it was the resident porcupine munching away on the salty wood of the shelter. Talk about a high fiber diet! 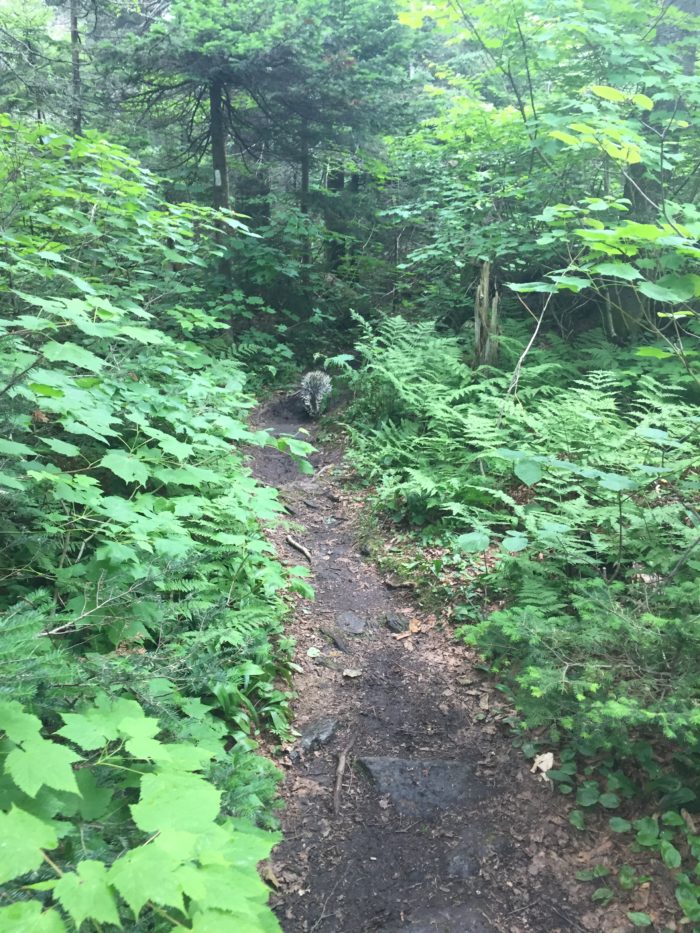 If you ever find yourself without a shower for a week, try jumping in a pond. It’s a truly incredible feeling! Upper Goose Pond Cabin is a must stay for any thru hiker. I’d been looking forward to staying there ever since I entered New England. The local trail club cares for the picturesque cabin just off the trail, even providing a pancake breakfast with coffee in the morning! Sign me up! After a long 21 mile day in the heat to arrive at the cabin, the first thing I did was strip down to my boxers to jump in the pond with a few fellow thru hikers I hadn’t seen in hundreds of miles. I love a good hiker trash shower! Oh and the pond was gorgeous too! 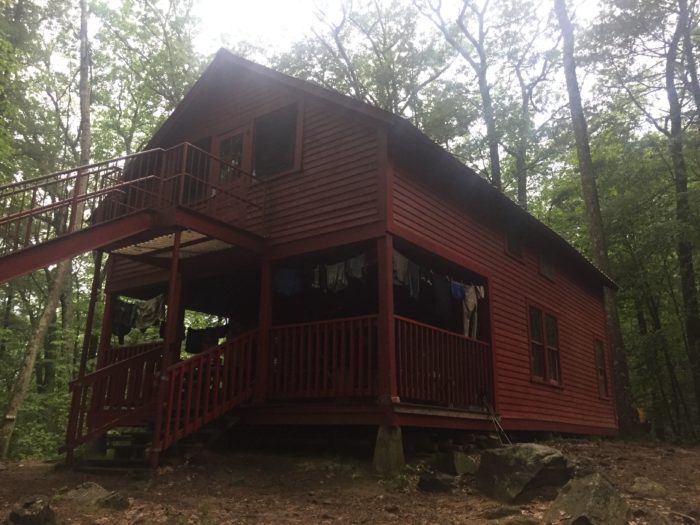 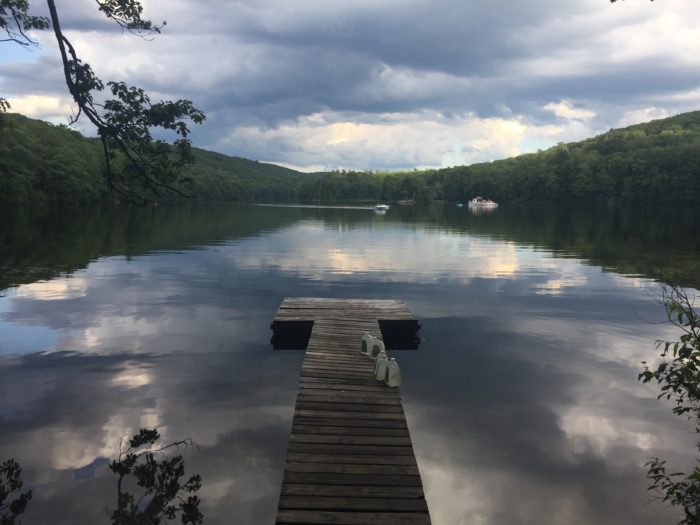 Care for a swim, aka shower?

After picking up my new shoes at the Cookie lady’s (an adorable older trail angel couple that provides, well, cookies, to passing hikers), I decided to spend the 4th of July on the trail. To me, it was special just to be enjoying an activity I love in a country I love! This 4th of July, I climbed the final obstacle in Massachusetts, Mount Greylock. 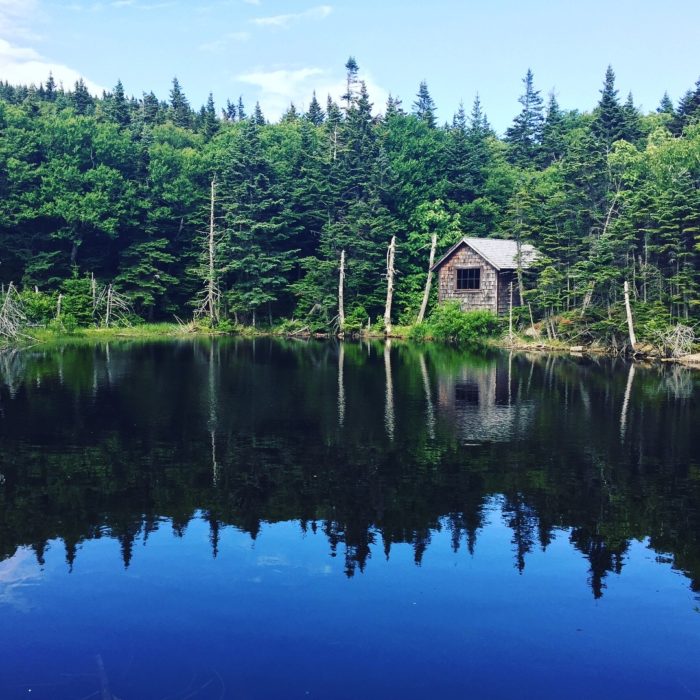 Mount Greylock, the highest point in Massachusetts, has famously inspired the likes of Henry David Thoreau, Nathaniel Hawthorne, and Herman Melville. While there’s now a road, lodge, memorial tower, and what seemed like hundreds of motorists at the summit, the views are still inspiring today! During the hike down the summit, it was easy to imagine the hills to be just as picturesque now as they were 100 years ago. Finally, we’re getting back to higher elevations and bigger mountains! 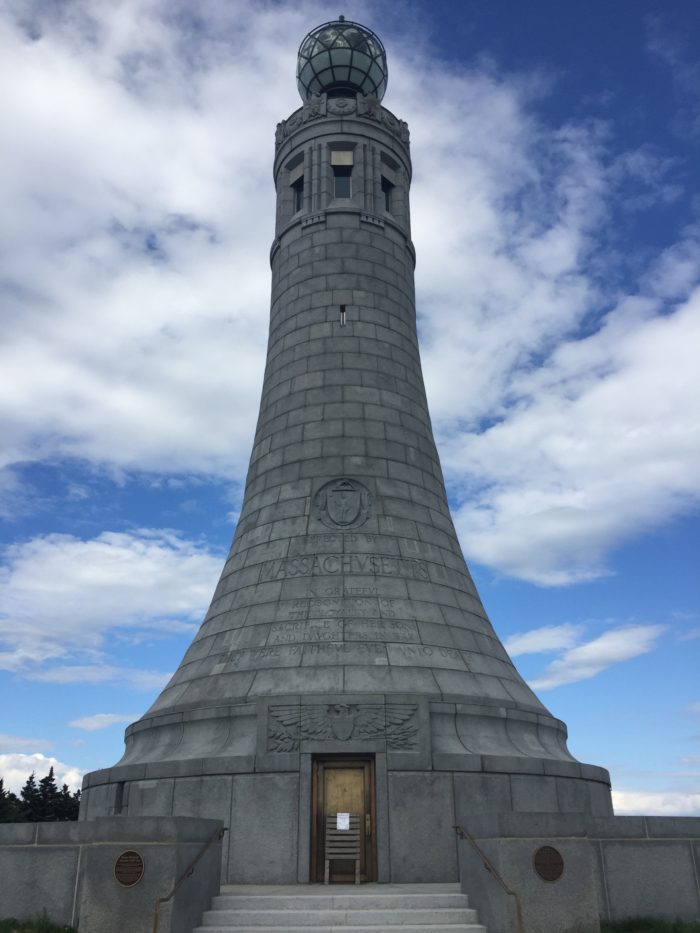 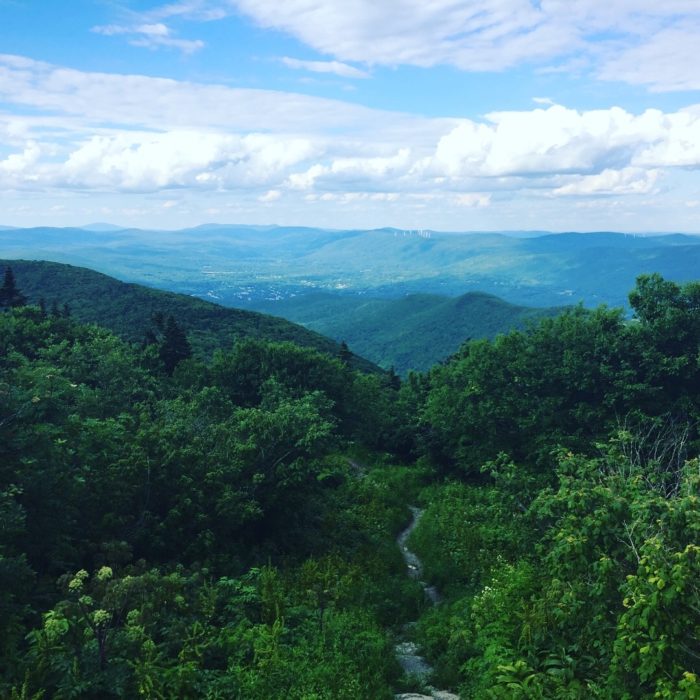 “Mud hole, slopfest, muddy pit.” That’s all I ever heard about Vermont when researching for my thru hike. So when I tiptoed across a massive mud puddle to the sign that announced I’d made it to Vermont, I was more than a bit worried. 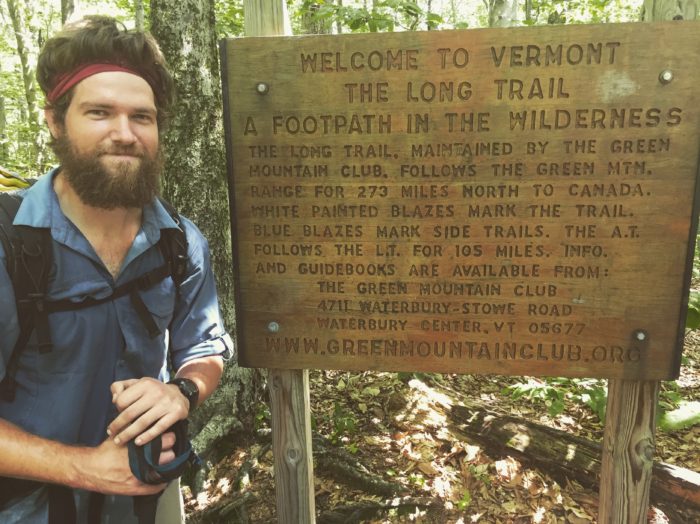 The AT follows the Long Trail for about 100 miles once you enter Vermont. The Long Trail is about 100 years old, eroded, and often poorly routed. The trail is essentially a ditch for the first part of Vermont, often resembling more of a stream than a trail. I submerged both feet at least 5 times throughout my first day, making sure I kept both feet mud-drenched, smelly, and soaked. My thoughts about the hiking in Vermont quickly soured. But then I camped out at a beautiful outlook, caught a beautiful sunset, met a hiker named Beeker (a retired chemist who brings a chocolate bar to share each night), and my time in Vermont completely turned around! (And the mud hasn’t been all that bad either!) 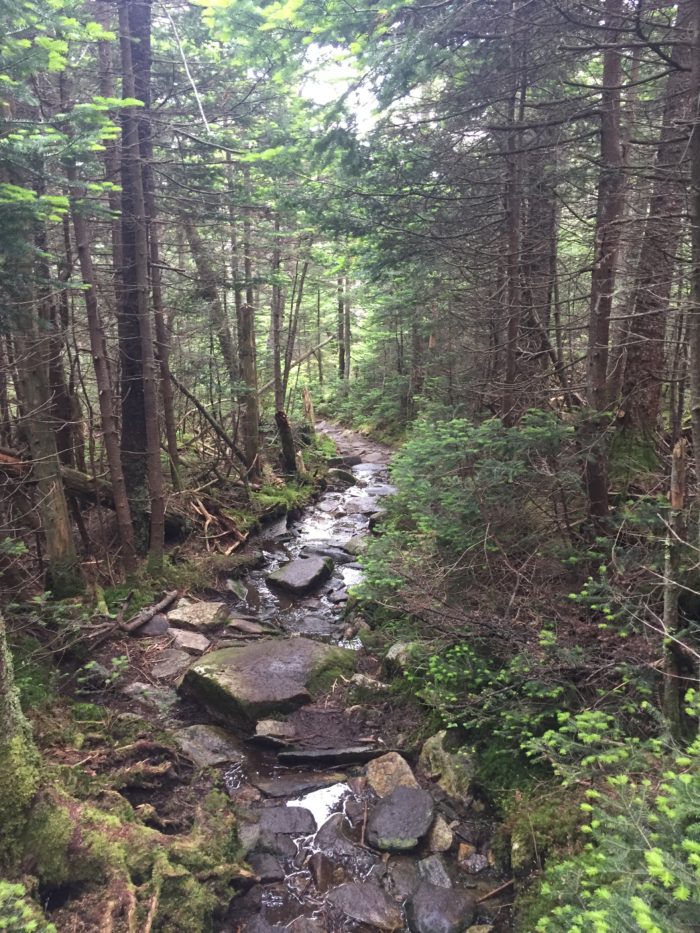 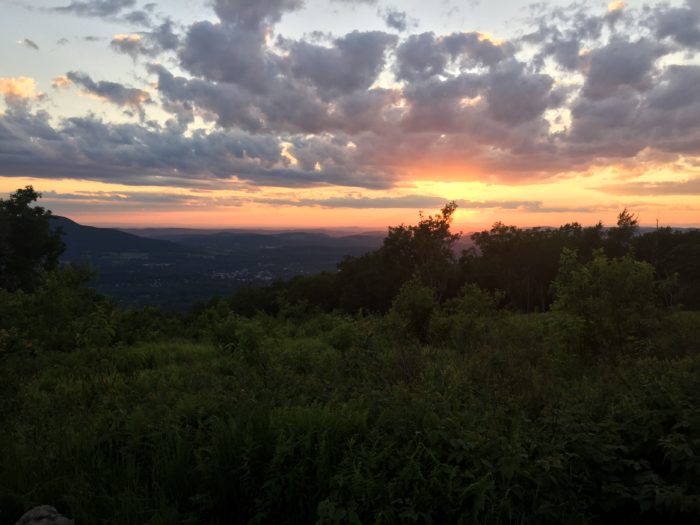 There’s Nothing Fishy about these Ponds

While Vermont has had tougher (read rocky, rooty) terrain, the forests have shifted to pine trees, the alpine ponds are tranquil, and the views have simply amazed me.

Stratton Mountain inspired the idea of both the Long Trail and the Appalachian Trail in the early 20th century. There must be something in the air here. When I ascended the watchtower, all that was in the air was fog. The view from the Glastenbury watchtower, however, more than made up for the lack of a view atop Stratton Mountain. 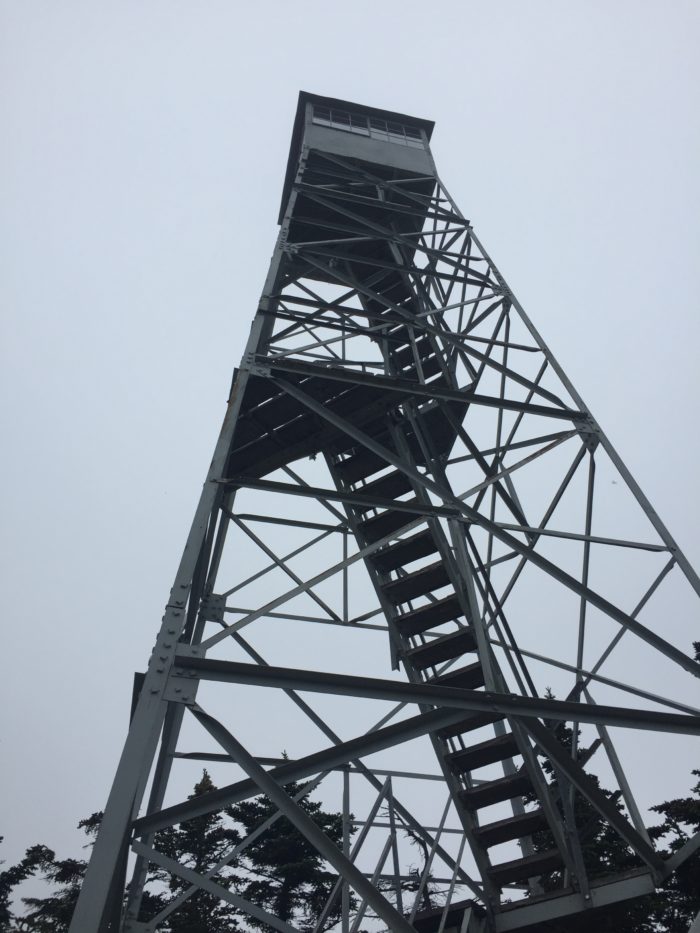 Only fog to see at the Stratton Mountain fire tower 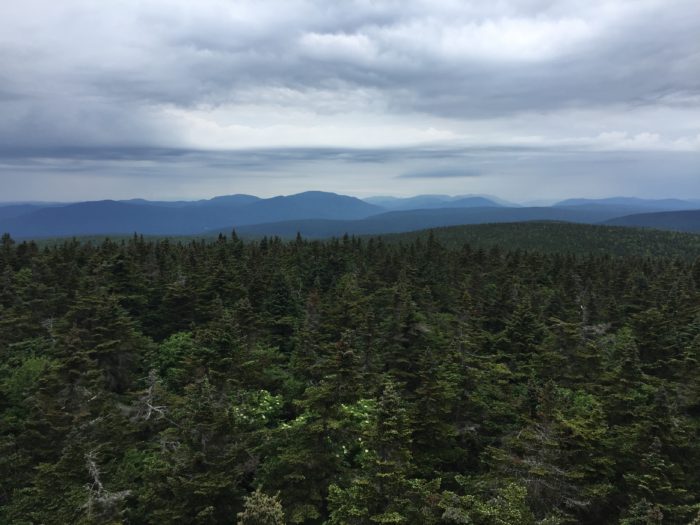 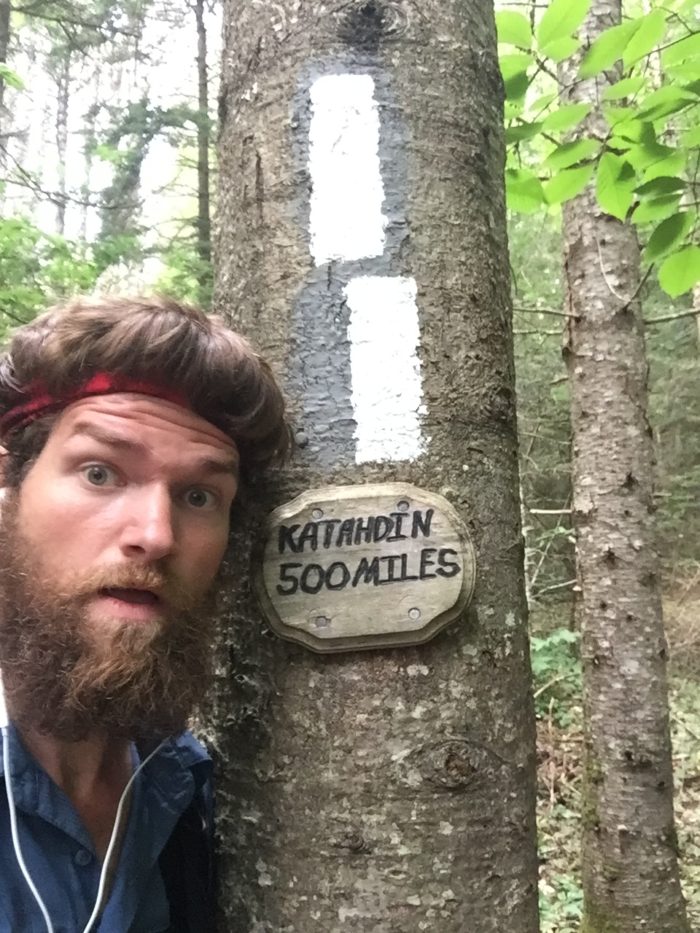 This trip has an end!?

Two mountain ponds in Vermont, Stratton Pond and Little Rock Pond, are just the types of ponds I pictured when fantasizing about hiking the AT. Quiet, scenic, and undisturbed, I enjoyed truly peaceful moments of reflection at both. I even awoke to the eery call of the loon at Little Rock Pond, a sound I’ve been waiting to hear since beginning my hike. 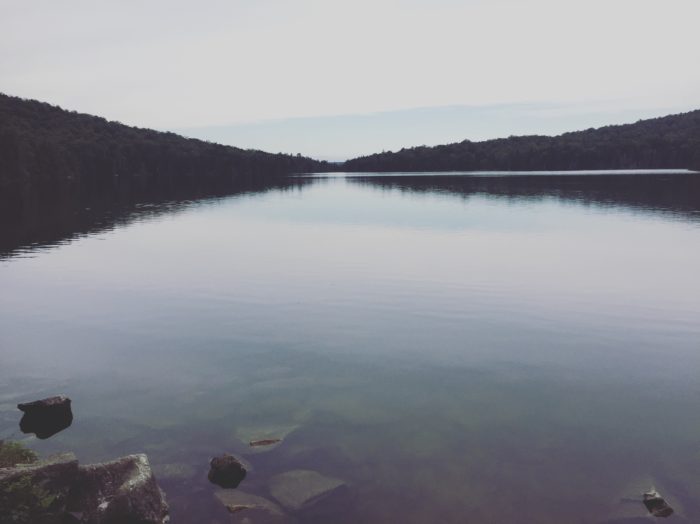 A misty morning at Stratton Pond 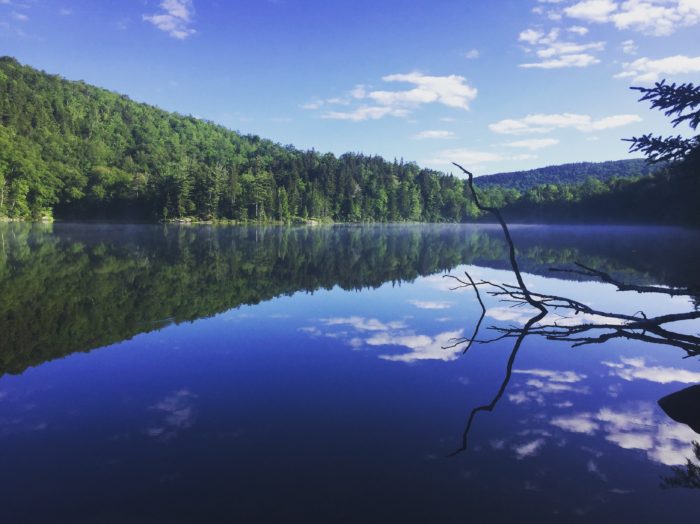 The steams rises from the peaceful Little Rock Pond, accompanied to the sound of the loon

This is Why I’m Out Here

Vermont’s beauty can’t be understated. Its forests have been different than anything I’ve experienced on the trail so far. The smell of pine trees and the abundance of clear running streams in the Green Mountains have made Vermont one of my favorite states so far. 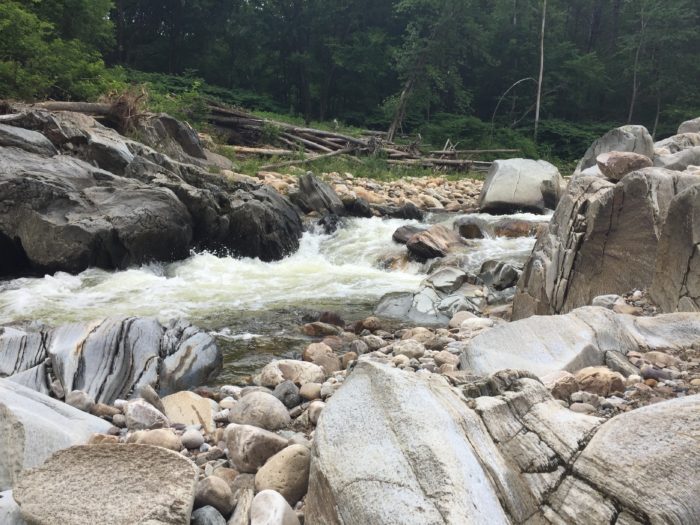 The company I’ve been hiking with, both new and reunited friends, has also made this a great section of the hike. Sometimes the trail is like a grade schooler trying to find their friends on the playground, only to make new friends along the way.

My favorite spot in all of Vermont was the summit of Killington Peak. At this point in my journey, a side trail (especially a quarter mile uphill side trail), better promise an outstanding view in order for me to wander off the AT to check it out. I decided on a whim to do an extra 4 miles to make the next day into town an easier day, and ended up camping on top of Killington Peak. Since I’d had such a long day, I arrived at 7:45, about 40 minutes to sunset. The summit was another 0.2 miles up a super steep side trail so normally I would’ve skipped it, especially since I was exhausted, starving, and it’d been slightly overcast most of the day. But I went for it. And I’m so glad I did. 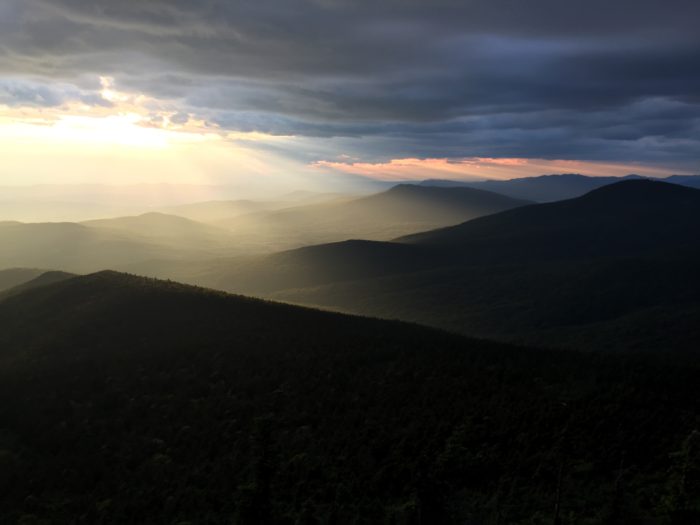 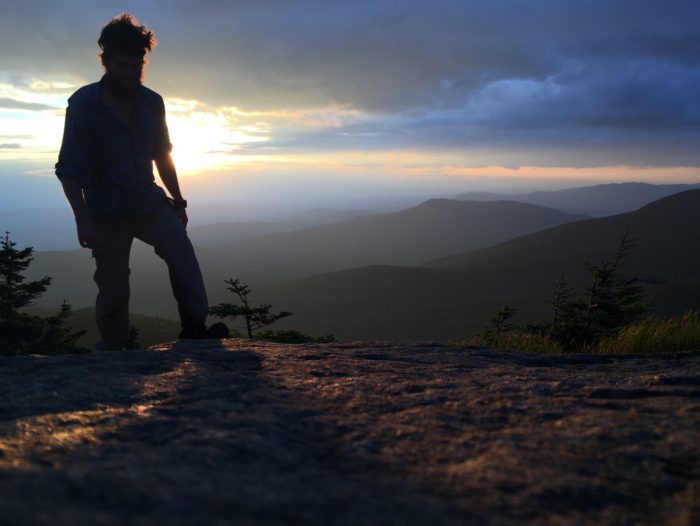 Once I scrambled above the trees the views were absolutely breathtaking. I couldn’t help but let out a loud rebel yell as I surveyed the Vermont wilderness as it was backlit by the setting sun and stormy clouds. Transfixed with the painted sky I thought to myself, “This is exactly why I’m out here. This is why I wanted to put myself through 2000 miles of pain. This is perfect!” I could’ve cried with joy. I had myself a bonafide “one with nature” moment right there, right then. (You would’ve too, trust me) 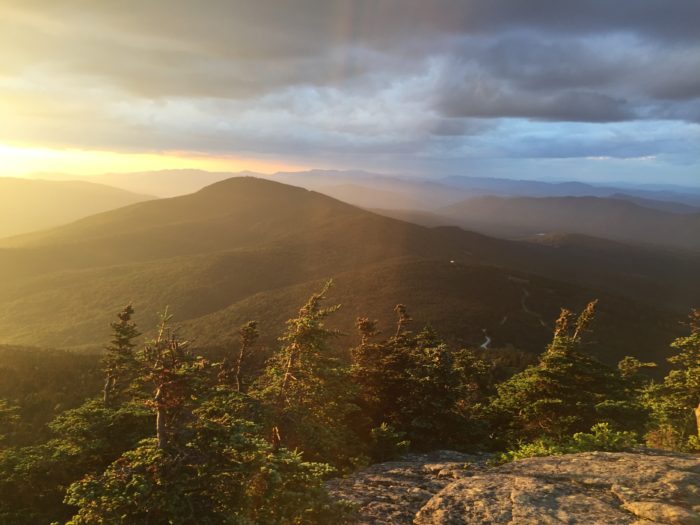 I see you, Vermont 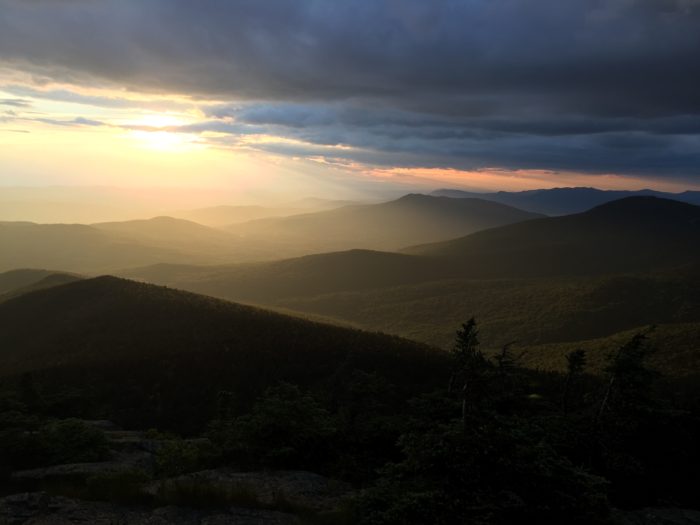 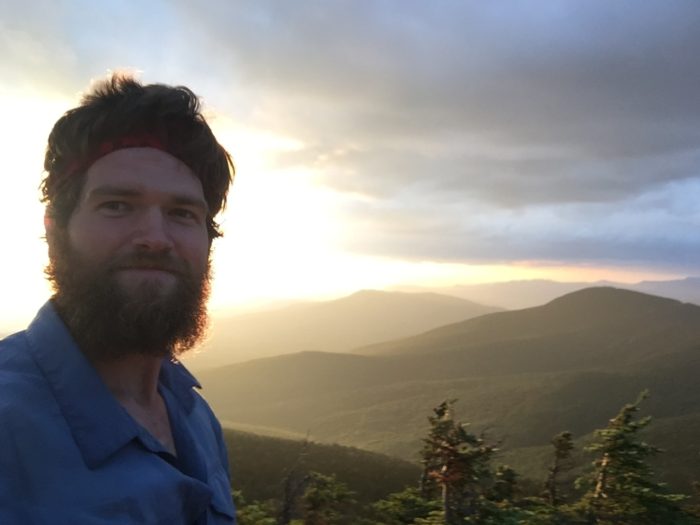 The Cult of Personality

I took a half day into Rutland, VT before finishing the last two days in Vermont and entering New Hampshire. I stayed at the trail famous Yellow Deli hiker hostel. The Yellow Deli, which is run by a 12 tribes spiritual community, which has also been called a cult (google them and decor for yourself). The hosts at the hostel were super nice! Like, too nice? They all had everlasting smiles, fed us breakfast, let us do laundry for free, and gave us organic food and soap from their organic farm. The whole vibe is of a super hospitable, hippy collective that really loves (loves to recruit?) hikers. All in all it was a great hostel and just another part of a grand trail experience. 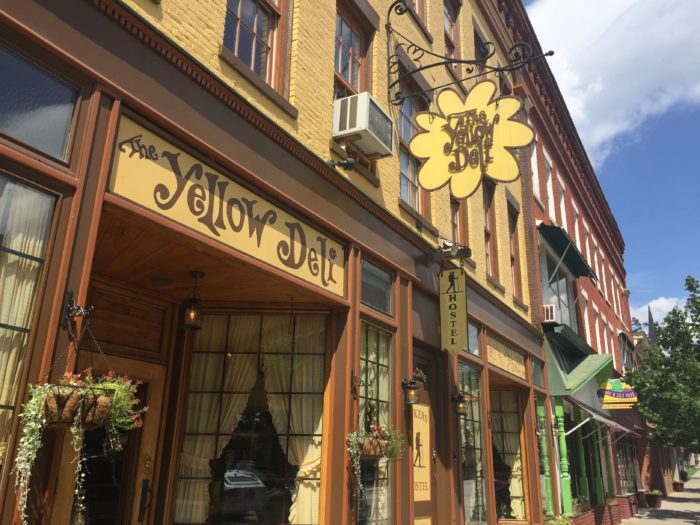 The last miles in Vermont have been tough, but it’s just been the warmup for what’s to come in New Hampshire and Maine. The last miles have been beautiful though, especially the Thundering Falls and Kent pond. I doubled my total bear count by startling three bears within 5 minutes. Also, does anyone know the reason some bodies of water called ponds and others lakes? 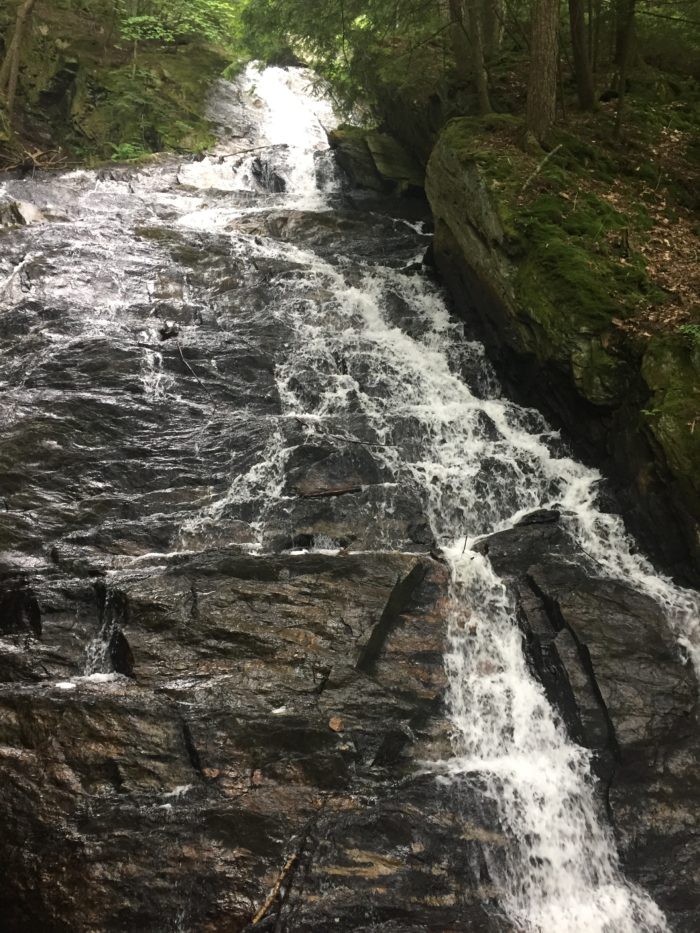 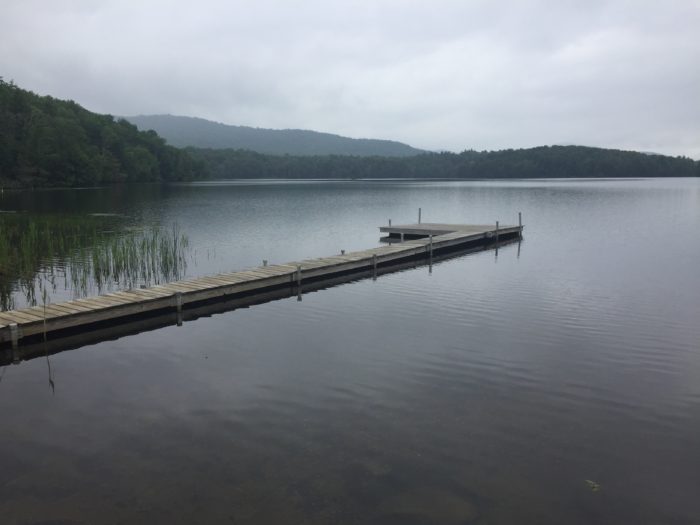 I just rolled into the Ivy League town of Hanover, NH, where Dartmouth college is located. I can’t believe I only have 2 states left! 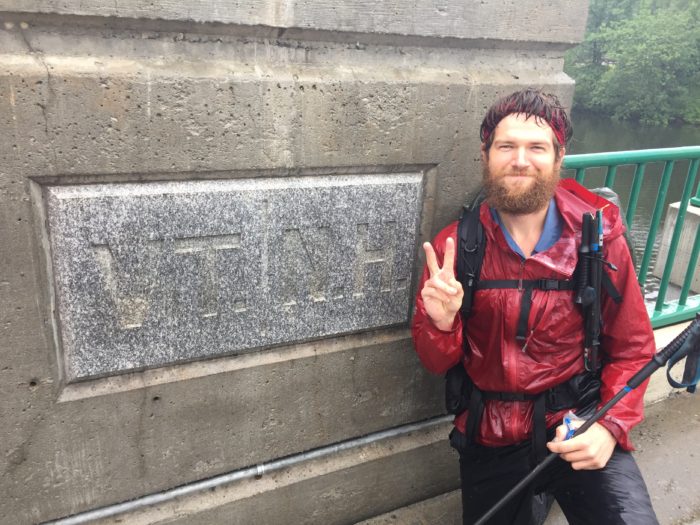 Up Next is the most anticipated, most difficult section of the entire Appalachian Trail: the White Mountains in New Hampshire. Stay Tuned!