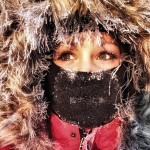 I have been looking forward to writing this entry for months! (picture me dramatically coming in like Risky Business). I knew I needed a longer shakedown before my Appalachian Trail departure this spring and Colorado in the fall was too good of an opportunity to pass up. I took a friend with me and we tackled every trail we could find in Aspen, stood in awe of the Maroon Bells, made a competition out of discovering road-side trails, and from morning until dark; we squeezed in as much time outdoors as possible before she left two days later.

Ahead of me lied what was supposed to be three days of blissful back country solitude. The Lost Creek Wilderness Loop was recommended by a previous Appalachian Trail thru-hiker who just days prior celebrated her completion of the Colorado trail, so I was thrilled to experience just a fraction of what she experienced on her journey. 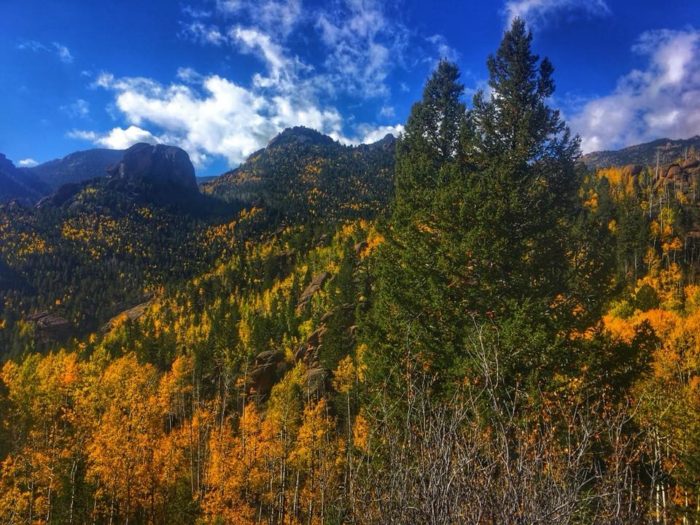 Tucked deep into the Pike National Forest, this 27.7 mile loop boasted rugged terrain, challenging topography, and a kaleidoscope of trees showing off their autumnal splendor. The decision to commit to this difficult trail was less to do with any modicum of self-confidence, and more to do with masochistically forcing myself to learn how to struggle and overcome. Go ahead and call it a need to prove someone wrong, because that “someone” has always been me. 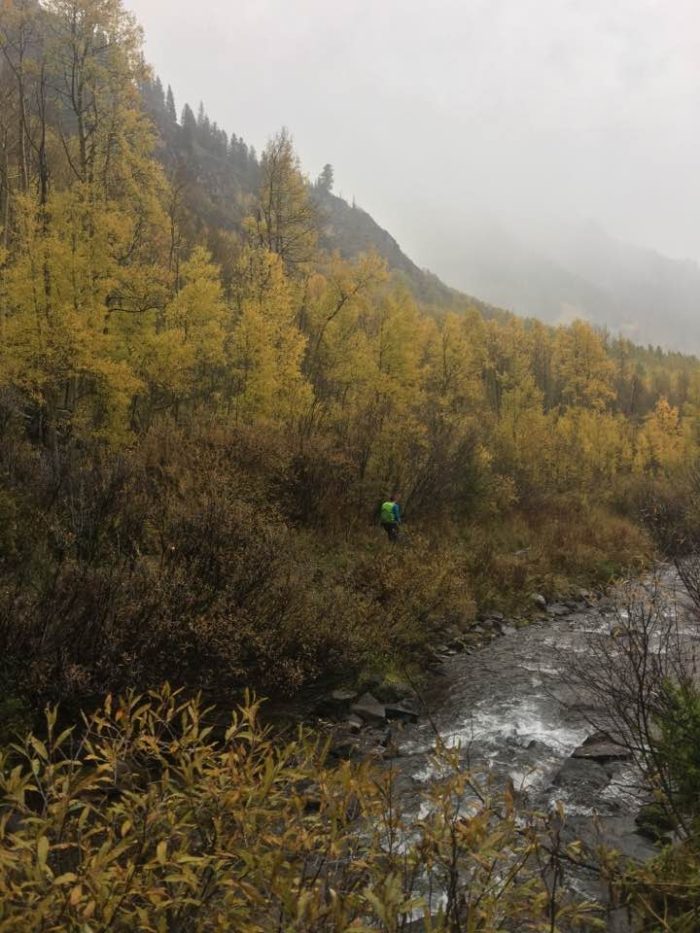 The large snowflakes of that morning made everything quiet. Forget nervousness- this day felt gift wrapped for me. I nearly pranced down the trail, weaving candidly amidst the evergreens. I beamed proudly as I filled out my permit and let it fall into the designated drop box. Rose colored glasses hid the dark clouds that were beginning to frame the range. How ironic it was to be numbed to the sting of the increasing wind by the sheer excitement of the day and not by my face responding to the slash of freezing rain and snow. My Pollyanna attitude was in for an adjustment with the low visibility and bursts of wind strong enough to cause me to side step on the trail like a dance I didn’t agree to dancing. It was only 3:30pm but I decided to stop for the night. That was a mistake since now I’ll have a lot longer time to be cold had I just kept moving. Basic camp chores tested every shred of patience I had- my tent blew away twice, I surrendered a stuff sack and a map to the wind- who needs jumping jacks to warm up when you’re racing your gear across the meadow? The night was long, miserable and at times, terrifying. 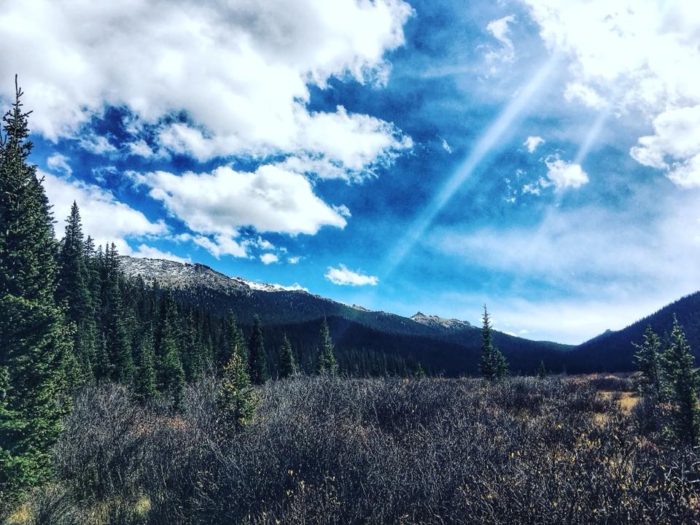 I would have said that I woke up the next morning, but that’s based upon having slept at all. I did develop some impressive core muscles by shivering all night, however. At first signs of the sun, I emerged from my hastily and poorly erected tent to survey my unfamiliar environment. Everything was white and shiny and I let optimism for the day warm me as I prepared to hike. I disassembled camp and strategically packed my bag. With my map now gone, I dug out my phone to use the digital map I fortunately thought to download the day before while I still had service. Noticing the battery at 7%, I was also thankful for the battery pack I remembered to include in my supply list- except the adapter was not correct. I had left that part in my car back at the trail head. I was already defeated on day two by a modern construct I tried so hard to evade by going on this hike in the first place. There was little else to do but resign to backtracking to retrieve that now vital piece of equipment. However, the sun was shining, the ground was sparkling and new. I could make up lost ground without sacrificing distance given how early in the day it was. I found myself feeling grateful for the previous night’s lack of sleep for this sole reason. The terrain that day was a grab bag of carpeted forest floors, steep switchbacks and exposed ridge lines. The 4000’ elevation increase up Bison Peak was grueling, especially at the end of the day after literally no sleep. I made a mistake of not refilling my water prior to the ascent, for the six miles after summiting was dry and barren. In fact, it reminded me decidedly of the Elephant Graveyard in Lion King. There is nothing else you want more than the one thing you can’t have when you know you have no access to it. The breezy 50* suddenly felt as sweltering and as arid as a desert. My attitude was not “embracing the suck”- my complaints echoed loudly and bounced off the walls of my brain and out my mouth as I plodded back below the tree line. (Transparency note: I may have loudly called a squirrel an asshole for barking at me for sitting under his tree). I didn’t even care about miles at that point. I just needed water and swore to myself that I would camp near the first sight of a stream. My day ended at 5:30pm once I found a quaint camping set up right next to a stream, as promised. I took my time filling up my bottles and subsequently set to work to resurrect my tent and start a fire. Determined to sleep and not freeze, I used my space blanket to wrap myself up like a burrito underneath my quilt and liner. I pulled my woolen hat all the way down past my nose and let myself drift into a much needed ten hour slumber. 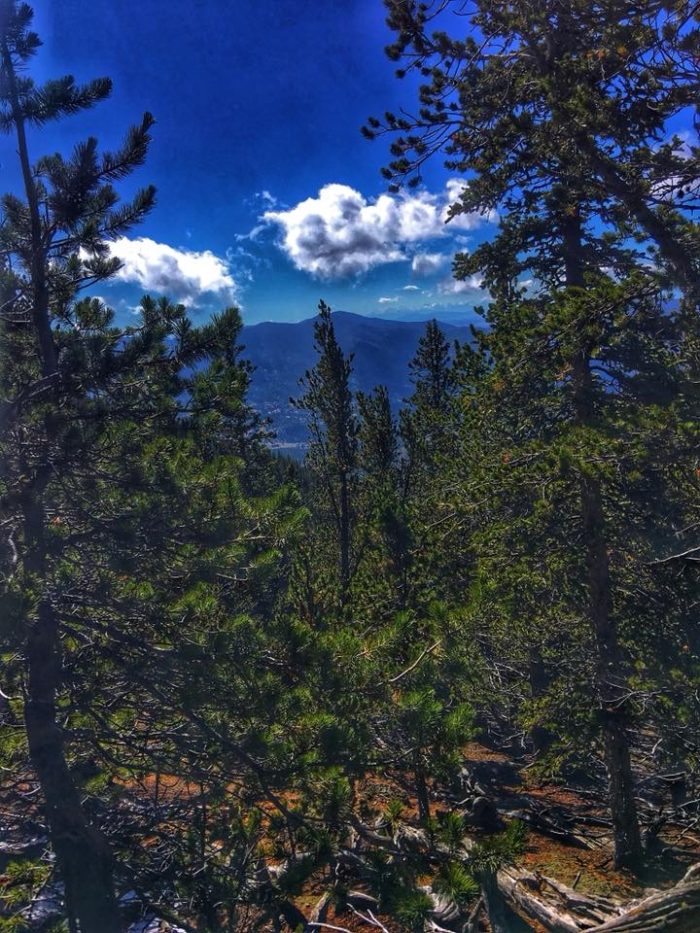 The long 3000’ descent into Refrigerator Gulch was like a dream. The cool air and damp forest added reprieve to the previous day’s toil. I loved how my singing voice somehow both echoed and muted against the towering rock walls and thick leaved trees. The constant sound of river flow only added to the symphony of sounds in my head. Rested and replete on endless views, I dared to consider finishing the trail that day. I was blazing past mile markers, blissfully unaware of the what the rest of the day would hold for me. However, I soon became convinced that much of the rest of this trail was designed for torture. Instead of large sweeping switchbacks, what I experienced was more like a zipper. There were times that I had to use my hands to pull myself up and over boulders and jagged parts of the trail that jutted out past the roots of the trees that seemed to hold the side of the mountain intact. Huffing and puffing and cursing every step, I finally made it to the beaver ponds that marked my mental goal of six miles before trail end. The hardest parts of the trail behind me, I scrambled for the mental fortitude needed to push those last few miles to the end. It was getting dark and cold, but creature comforts are a powerful motivator. Instead of letting my mind wander, I put it to work constructing menus of all the foods I would eat or imagining how heavenly a hot shower would feel. Nearly meditative in its application, I became transfixed on seeing my vehicle on the horizon. I stopped and steeled my breath periodically when my body shouted louder than my pressing need for completion. One submerging fall into a river, one knee high shoe devouring patch of mud, and one brief entanglement with barbed wire later; I still can’t express my relief to approach the road, thus ending a remarkably difficult trail.

The enticement of struggle and the solo hiker 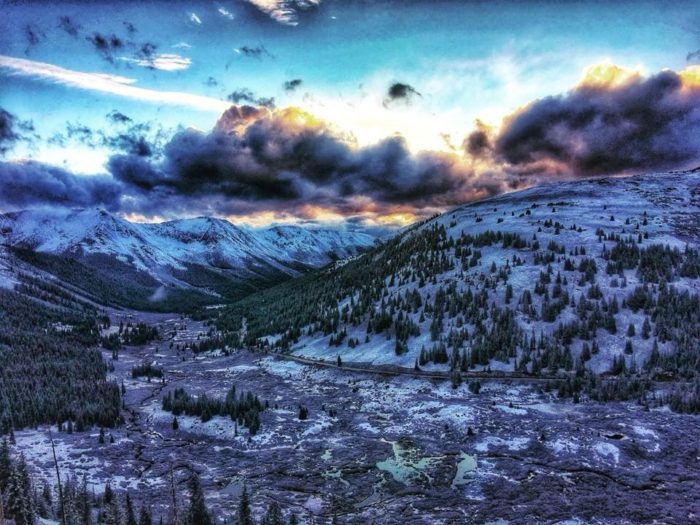 If I never hear “it’s better to hike with someone than to hike alone”, it’ll be too soon. I think women in general experience an interesting paradigm shift when they embrace their strength and abandon the lingering social construct that incessantly tells them to be weaker and accepting and in the background. Bold and brave women are celebrated on the silver screen but are responded to as reckless and subversive and almost threatening otherwise. Since when can’t women have big adventures by themselves? Why is it assumed that I can’t protect myself? But more importantly, why is it so common for women to endure uninvited advances and unsolicited advice that we accept it as the norm, but being in the wilderness without a companion- male or otherwise- is dangerous and irresponsible? When I am out on my own, it is the one certain place I can exist without other people’s limitations of me. It is both my sanctuary and my gauntlet. It is where I can be Amy and challenge every thread of my own mental, emotional and physical being. The threats of passive subjugation vanish as I navigate winding trails, climb steep rock walls, and test my resolve against Mother Nature herself. The only thing that exists between a beautiful and indifferent landscape and my success within it are my own skills and resolve. This isn’t just adventure to me- it’s a reclamation of self. 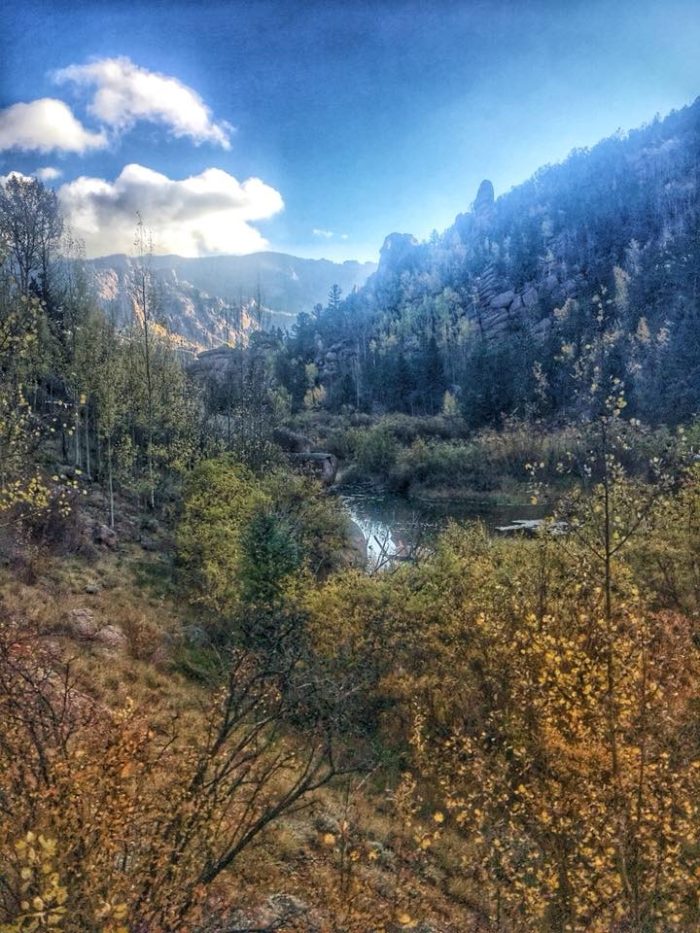 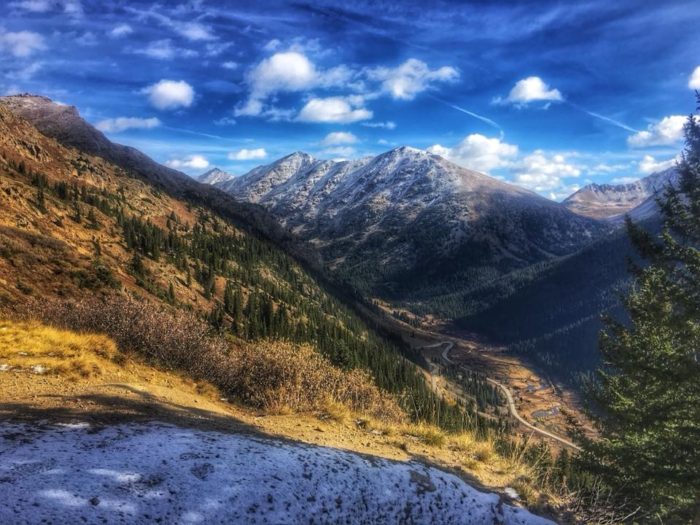 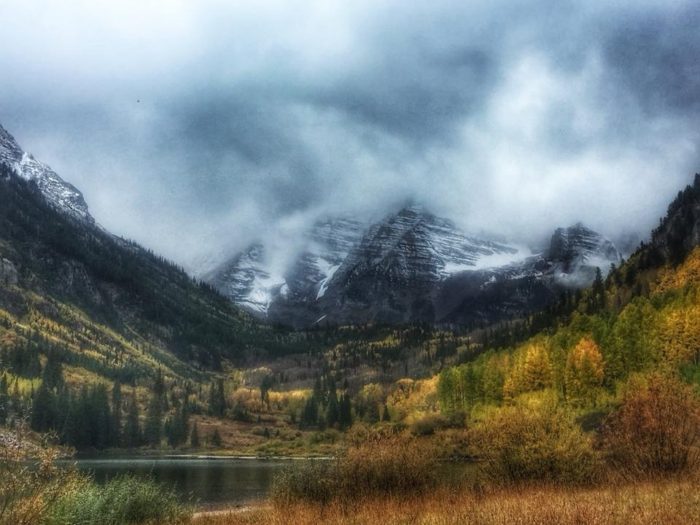 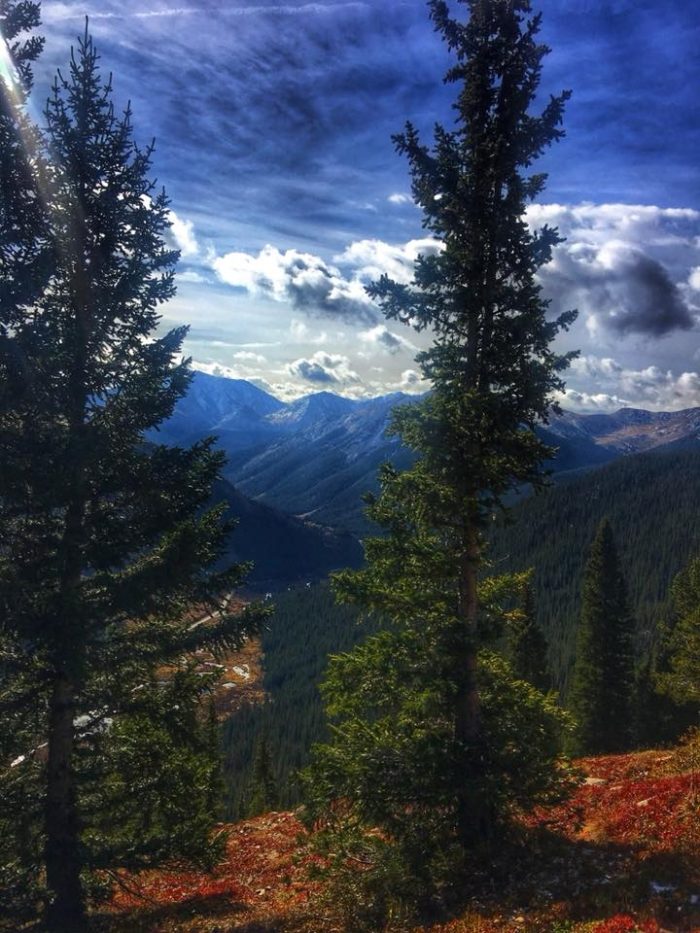 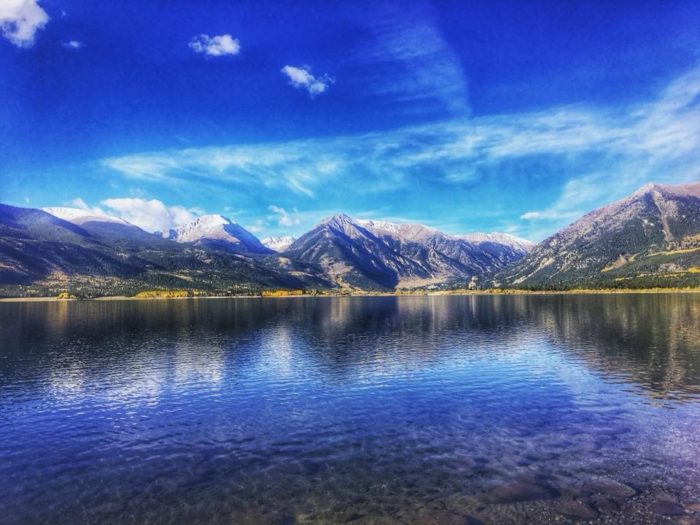 Have you ever tried spreading cold butter on toast? I'm like the human version of that. I'm a quirky and complex mess with an unrequited love for anything dairy. Shiny hair is my life's ambition and I'm ashamed of what I've done for a Klondike bar. More importantly than that, I am an aspiring 2018 Appalachian trail thru hiker on a mission to use that time to raise awareness and money for the Minnesota Coalition for Battered Women. If you want to get to know me better, I encourage you to visit my website- www.merakiwild.com.