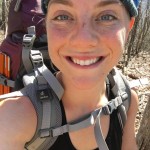 So Your Loved One Wants to Take a Hike

About a week into my thru-hike, we were sharing stories around a fire when I brought up one that involved my boyfriend. The guy next to me seemed shocked; I figured that my unshaved legs and matted hair led him to the disbelief that I actually had a man interested in me, but no, he was surprised for another reason.

“He let you come out here? If I was dating a girl, I would never let her come out and do this.”

At the time, I was totally put off. First of all, nobody let me do anything (nods head emphatically). Second of all, when you care about someone, you support them in their endeavors, even if you’re not necessarily crazy about it yourselves.

I thought about that conversation again and again, because I would see that similar thought processes affect other hikers. It wasn’t just young relationships, either. I met a man whose long-term girlfriend left him before his hike because she “didn’t trust him around all the desperate women” out there. I’m in a women’s Facebook group where I read a post almost every week about how it’s somebody’s dream to hike just a section of the trail, but her partner won’t support her (one husband wouldn’t even watch the kids for a weekend while she went off backpacking).

And, of course, it’s not just in dating and marriage relationships either. I would see or hear time and time again of parents, children, bosses, coworkers, or so-called close friends being completely unsupportive, saying things like “you have your head in the clouds” and “you’ll never be able to make it.” If you’re reading this, please don’t be that person. Here’s a list of things you can do instead when you have someone important in your life declare they want to take a thru-hike.

Understand this is five to seven  months; you get a lifetime.

In the grand scheme of things, even a full thru-hike doesn’t take that much time. If you’re in a relationship with somebody who you plan to spend the rest of your life with, don’t you think you could spare six months if it meant them pursuing a dream of theirs? It may sound harsh, but in many cases, they may have had the dream of doing this hike even before they met you.

Like all good parents, my mom and dad were worried sick when I informed them of my hike. Truth be told, they didn’t know much about the AT at all, and just envisioned this vast wilderness with no cell phone service and roaming packs of hungry wolves. Once they watched documentaries and YouTube videos, and read a little more, they realized it wasn’t as isolated as they may have thought, ultimately making them feel a lot better. You may be surprised to discover how safe the trail is, and what the backpacking community is actually like.

My parents also did this, but I saw a friend’s boss and coworkers track his journey as well. They bought a huge Appalachian Trail map, cut out a picture of him, and moved his image along the trail when they would get updates. This is an amazing way to show your support in a fun way.

Don’t add to the stress.

Although we tend to only think about the physical aspects of the trail, your hiker will be undergoing major mental and emotional strain as well. Pressuring them that they aren’t calling enough will definitely not help. Be aware that some places don’t have cell service, and other times that person may simply want to be in the moment. Agree on respectable check-ins, which may be once a day for some, or once a week for others. I promise, they’ll be thinking of you, too. There will be times that they’re edgy, irritated, frustrated, and feel like giving up. Do your best to support them unconditionally.

There are many ways to do this. It is so easy to send care packages and letters, which means the world to hikers when they get into town. Once your hiker gets going, they’ll have a better idea which towns they’ll be in and when. You can send packages to hostels, hotels, post offices, etc.

Another way to stay involved is to visit. If the trail comes anywhere near your home, or even if you want to do a fun road trip, it’s not difficult to coordinate a meetup. Many of the people I hiked with had family members and spouses visit them multiple times. Some hiked a little bit, others got hotels for the weekend, and many even provided trail magic to hikers, such as setting up a cooler with cold drinks by a road crossing, or having a mini cookout.

Think before you join.

This is the last pointer I’ll say, and it’s one I almost left out because I’ve been worried about stepping on some toes. Please really think about it before you let me offend you. If you have a loved one whose ultimate dream is the thru-hike, they most likely have their whole heart invested in this endeavor. A successful thru-hike is by no means an easy, “Oh, I guess I’ll do it” goal. If you truly want to join them in this journey because you also wholeheartedly desire to thru-hike, then by all means do it. But if you’re joining them because you want to tag along, don’t trust them, or don’t want them to do something life-changing without you, I’m afraid to say that it won’t be enough. You most likely will not be happy in the process of the journey, and worse, you may negatively affect their hike. I briefly hiked with a couple off and on in the beginning of my hike, and I saw this firsthand. He was truly excited and eager to be out there, whereas she was so obviously miserable. After a while, you could see it wearing on his enthusiasm as well as their relationship. So take some time to really decide if it’s something you want to do before you say, “Wait, I’m coming too.”

Now, if you want to join them for a short amount of time, rather than a full thru-hike, right on. I saw plenty of parents, siblings, spouses, and friends join for a couple of days on the trail. The only thing I’ll say about that is be aware that your loved one that’s hiking most likely has a routine and their trail legs developed. Although some people don’t mind slowing down to accommodate a visitor, other hikers really resent it (which may come as a surprise to both of you, actually). Just make sure to have open communication with your hiker so there’s no tension.

I hope these were helpful. A thru-hike is a beautiful journey, and your employee, child, partner, or friend will return a more well-rounded individual after the experience.